Five years… That’s how long MING has been creating its watches. Through praise, controversy, and swift sales, MING’s releases are always something we look forward to at Fratello. Now, the brand is taking a moment to celebrate with the announcement of the new MING 37.07.

When people ask me about some of my favorite brands, vintage or new, I list some of the usual suspects. A nod often follows, and then at some point, I bring up MING. Naturally, watch folks either know the brand or they don’t. In 2022, there are more small brands than ever, yet MING is the one that stands out for me. MING makes watches that somehow align with my aesthetic tastes while challenging the norms of what I almost always buy — something tool-like. I love the deliberate attention to detail that the designers place on everything they do, including the accessories. Furthermore, many of MING’s watches are priced at a level that doesn’t keep me out of the game. 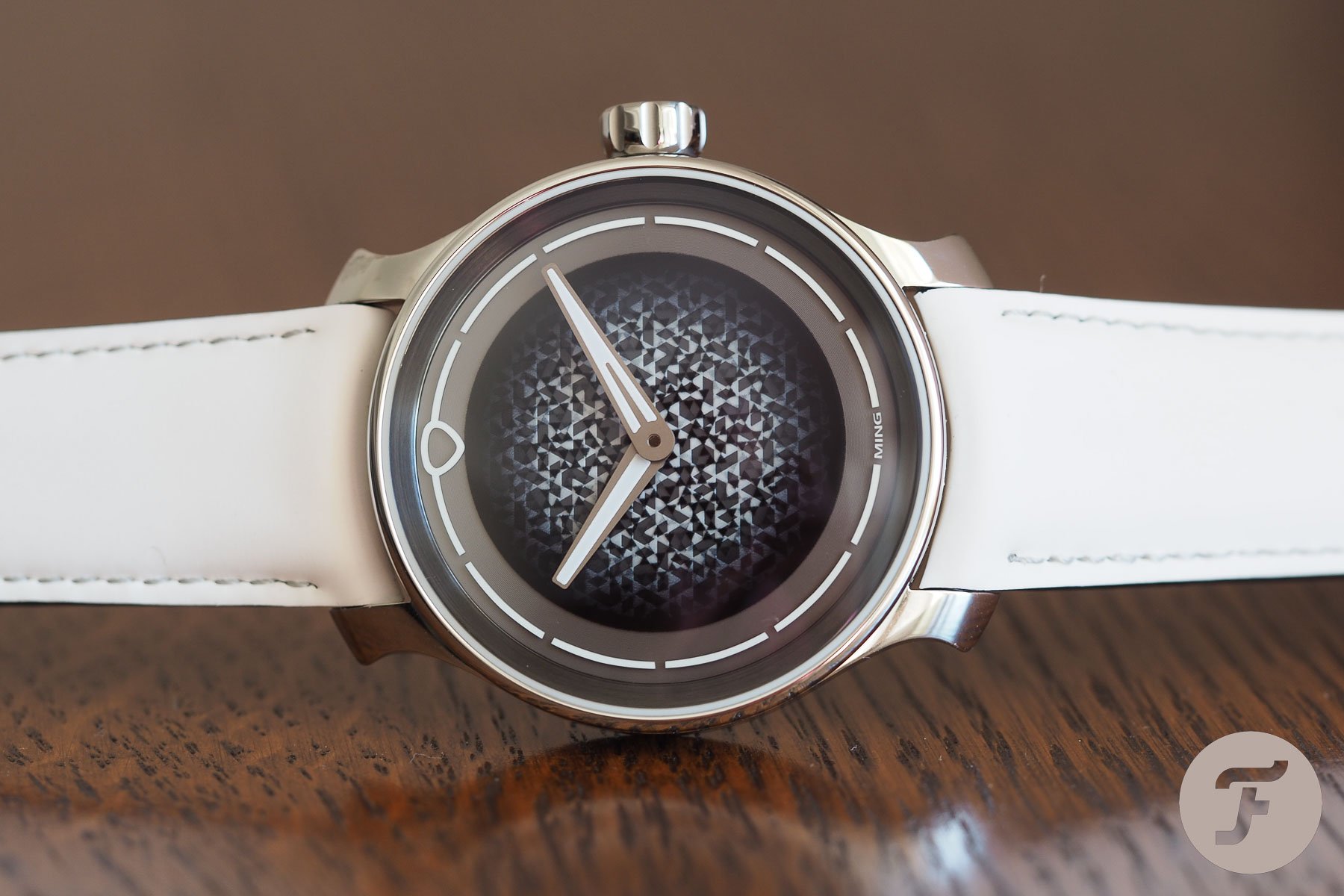 I was looking back at my articles on MING watches, and the first came in 2019 when I reviewed the 18.01 Abyss Concept that I should have bought. I didn’t go hands-on, though, so my interest was piqued from arm’s length. In fact, it was December of the same year that I was finally able to hold the 17.06 Slate. I had minimal expectations because, after all, this wasn’t a tool watch like the 18.01. Normally, dress watches are a curiosity at best for me. However, I received the 17.06, and I marveled at the design language and the finishing that came along for an incredibly attractive price. Since then, I’ve looked forward to every single MING. Today’s MING 37.07 is no different, and to ruin the surprise, I love it. 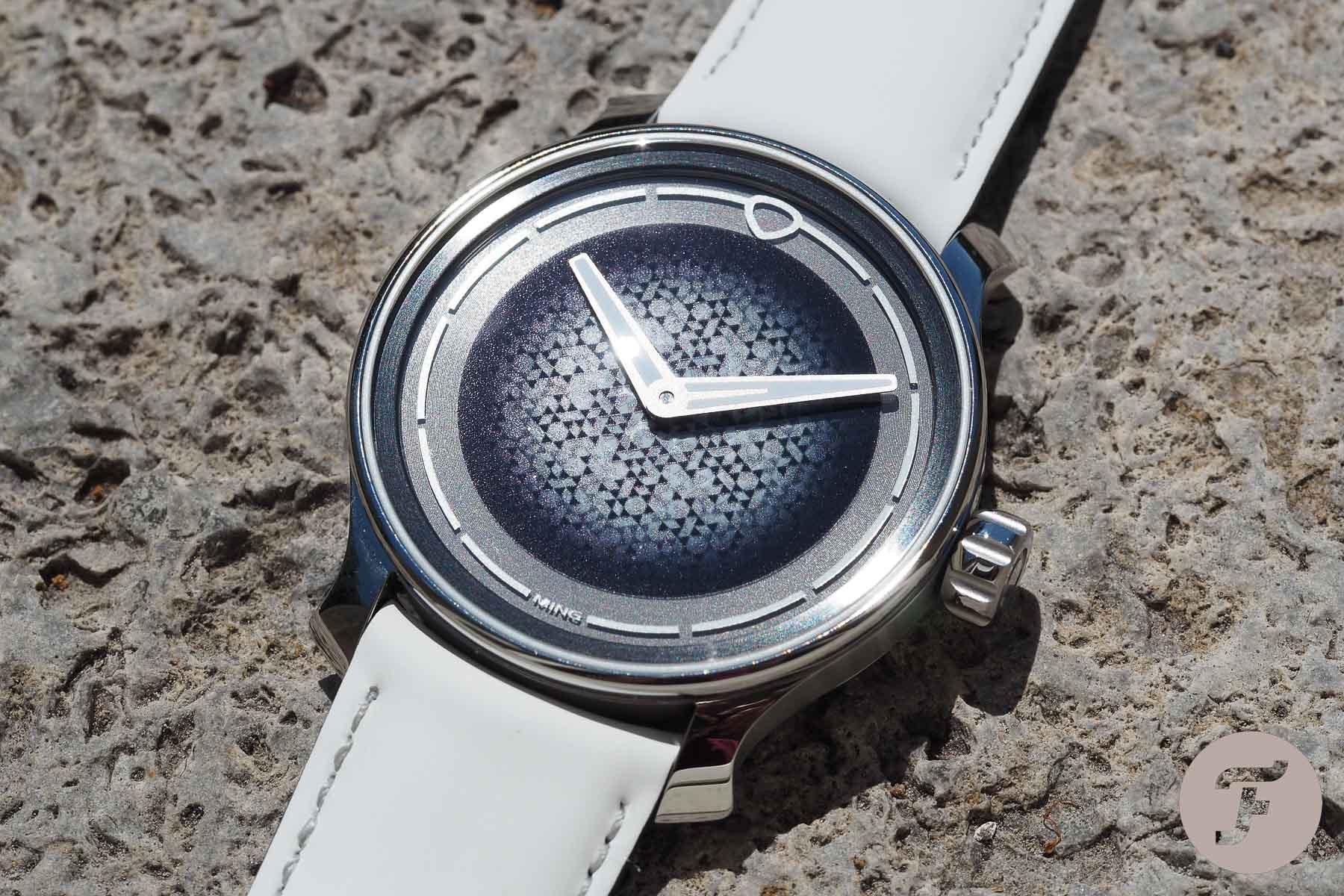 Normally, with a new MING, I cover the press release and then go hands-on several months later when a prototype reaches my desk. This time, however, I was fortunate enough to spend time with one of the two working prototypes before the embargo. I had roughly a week with it and wore it quite a bit. Much like those heavily camouflaged BMWs, Hyundais, or Kias that are ever-present on the autobahn near Frankfurt, I was a walking prototype for a week or so. Did you manage to spot me? The other cool tidbit is that newly appointed CEO Praneeth Rajsingh (congrats, by the way!) refused to give me any details about the watch. He simply sent it and wanted to gauge my reaction upon opening the package. Suffice it to say, there was a big smile and a wow when it arrived. 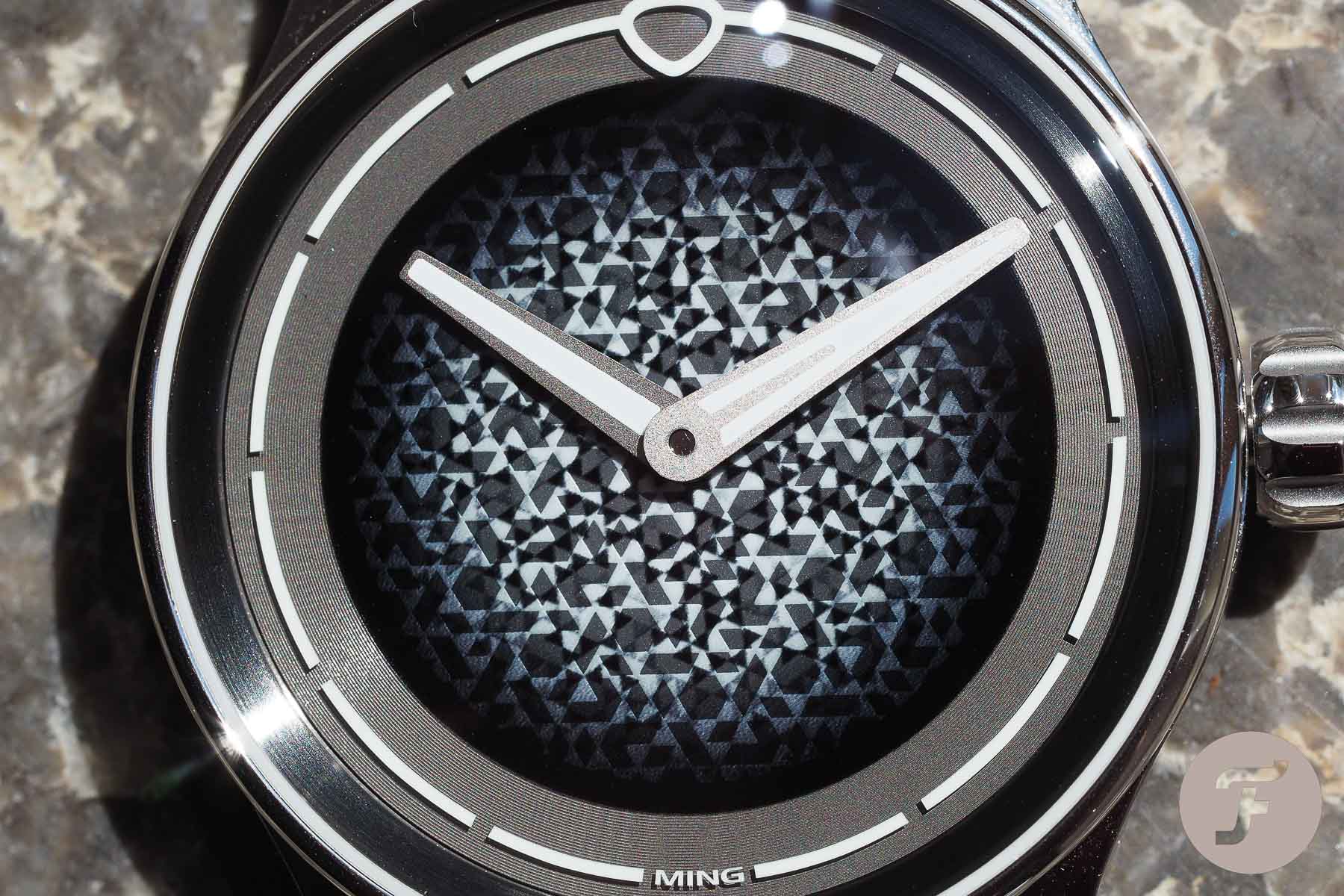 It’s all in the details, of course

When getting a new MING watch, it is one part knowing that something will be familiar and another part wondering what magic the brand will infuse into its newest wonder. The MING 37.07 definitely is a MING, but the designers have once again nailed the magic with a dial that’s unlike anything I’ve ever seen. The central portion and outer gray ring are fashioned from brass. The central area has a printed motif and uses Super-LumiNova for the lighter-hued portions. You’ll also note a gradient towards the edges where it darkens considerably. The magic comes in, though, in the form of a thin sapphire layer above the brass dial. This layer has the same pattern printed on both sides and the effect is mesmerizing.

Due to a domed sapphire crystal, the MING 37.07 isn’t as easy to photograph as its predecessors. However, the effect of all the layering and printing in conjunction with the gradient produces a truly unique effect. Essentially, the center of the dial looks like an orb emerging in 3-D. What’s more, the effect is more or less dependent on the lighting. Finally, in the dark, lume casts a bluish light that moves the watch away from its monochromatic tones. It’s a wonderful presentation that represents an evolution of everything that MING has done up to this point. 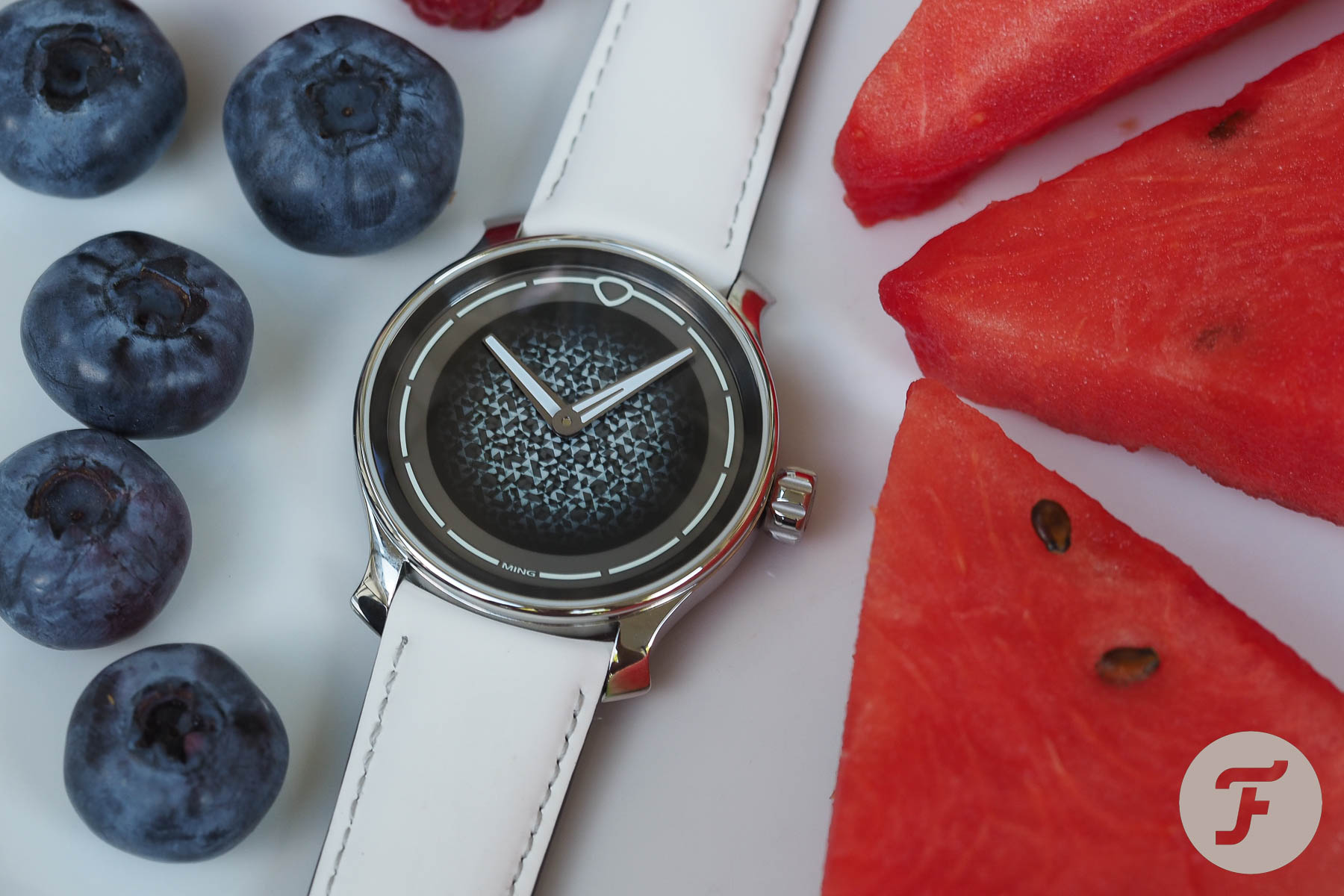 Other stylistic points worth noting

The MING 37.07 utilizes the same case that we saw on the 37.05 Moonphase, and it’s a definite departure from prior models. There’s a lot more crystal here, even though the case remains wearable at 38mm. Plus, the watch is polished, and that also contributes to it looking larger than the numbers would suggest. MING’s new handset is on proud display here, and I like the simplicity and bold use of lume. Similarly, the updated crown is large and useful. It also helps to keep the watch looking a bit sporty. That’s a good thing because the 37.07 has 100 meters of water resistance. 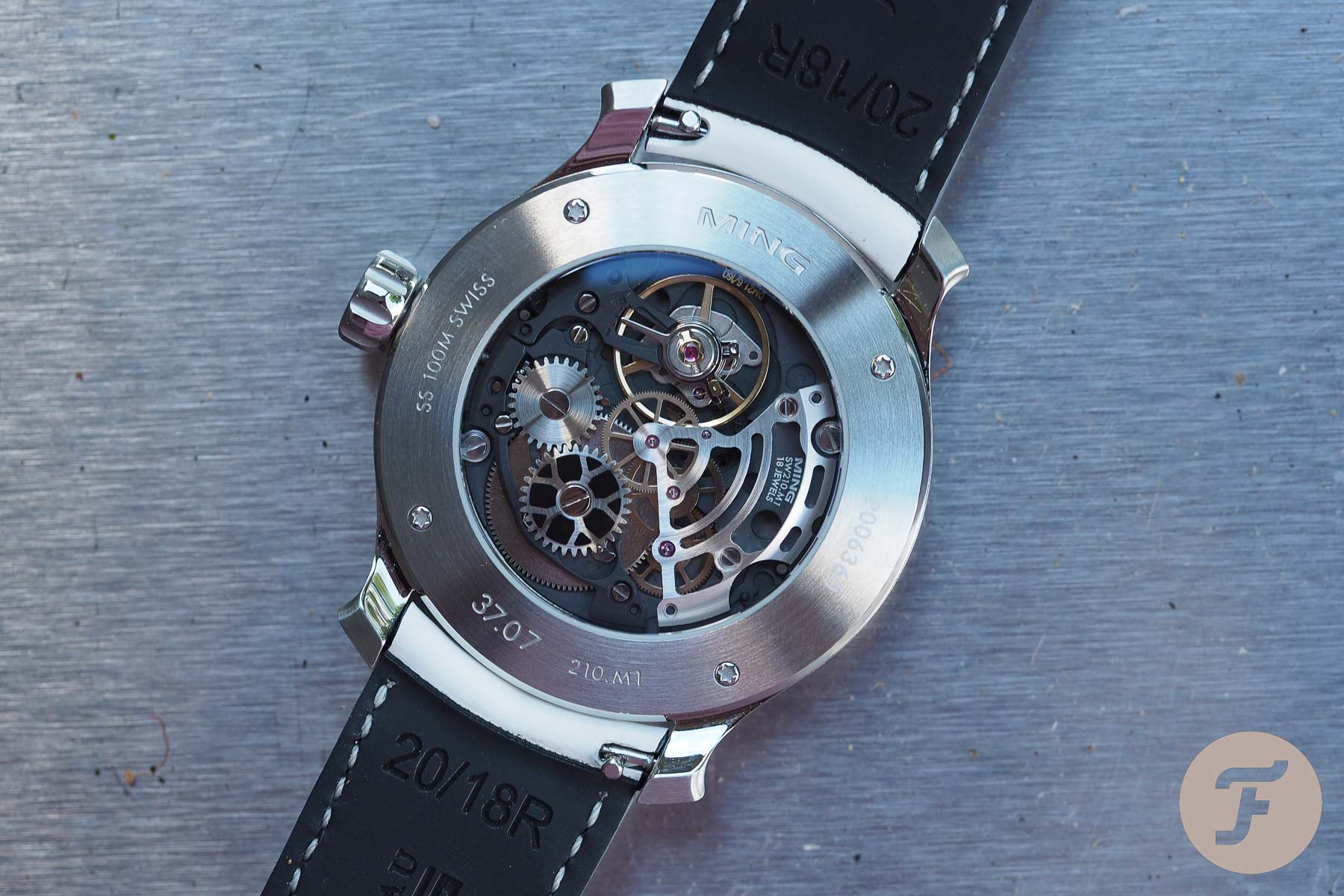 A movement on display

Once again, MING chose to partner with Manufacture Schwarz-Etienne to provide finishing on the Sellita SW210 manual-wind movement. The brand chose this type of movement because its first watch, the 17.01, was also a hand-winding affair. In my opinion, it was a great choice! As you can see above, the movement has anthracite skeleton bridges and rhodium circular brushing. Movement snobs will moan, but I find the execution incredibly attractive, and reliability shouldn’t be an issue. 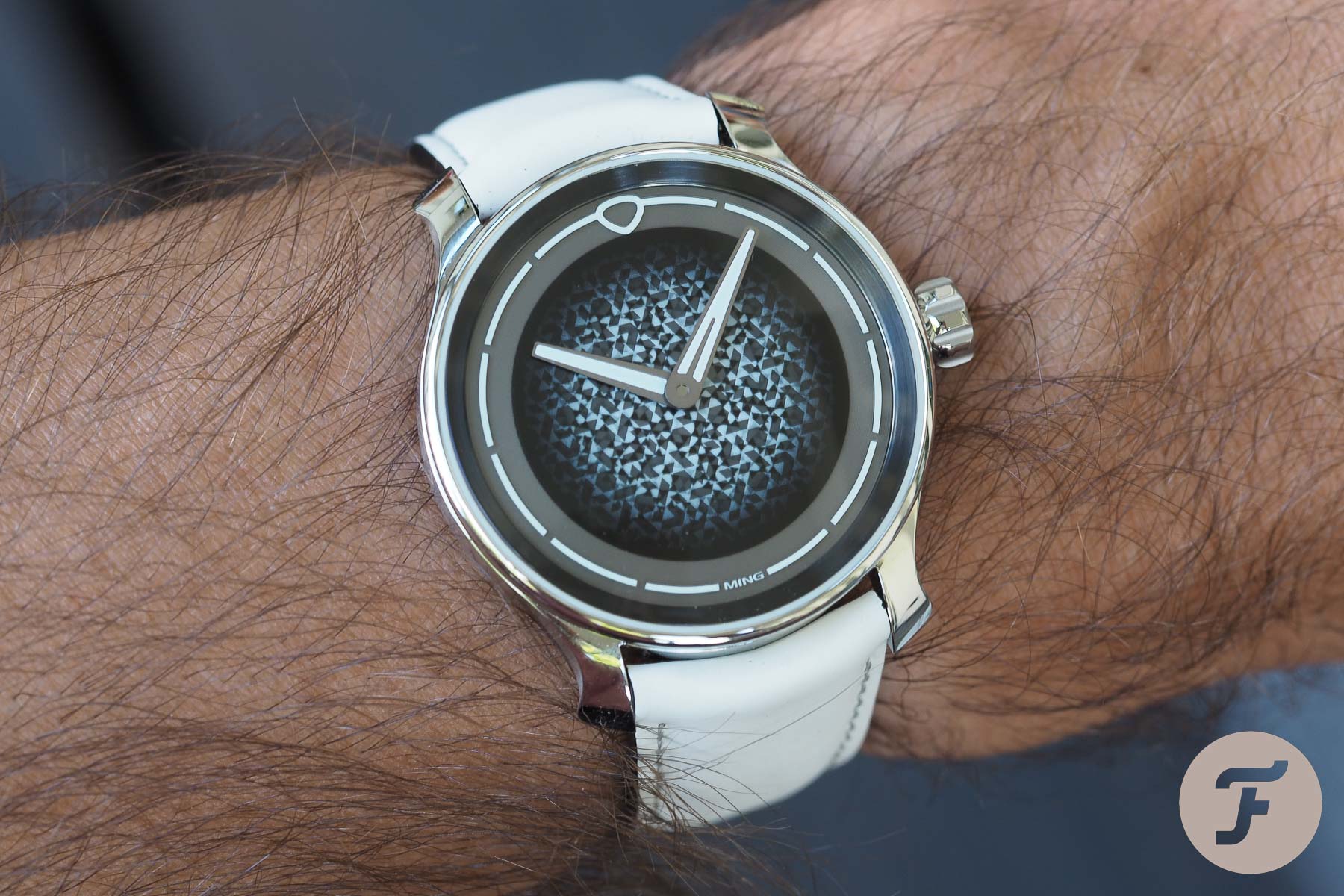 It’s no surprise that the MING 37.07 wears beautifully. The watch is only 10.9mm thick with a lug-to-lug of 44.5mm. MING chose to fit the watches with a white quick-release Jean Rousseau water-safe rubber strap. The white works well with the watch, but I’d probably go with something darker for everyday use. I’d be concerned about the white looking dirty after a while. The bigger news, though, is the fitment of the so-called tuck buckle. 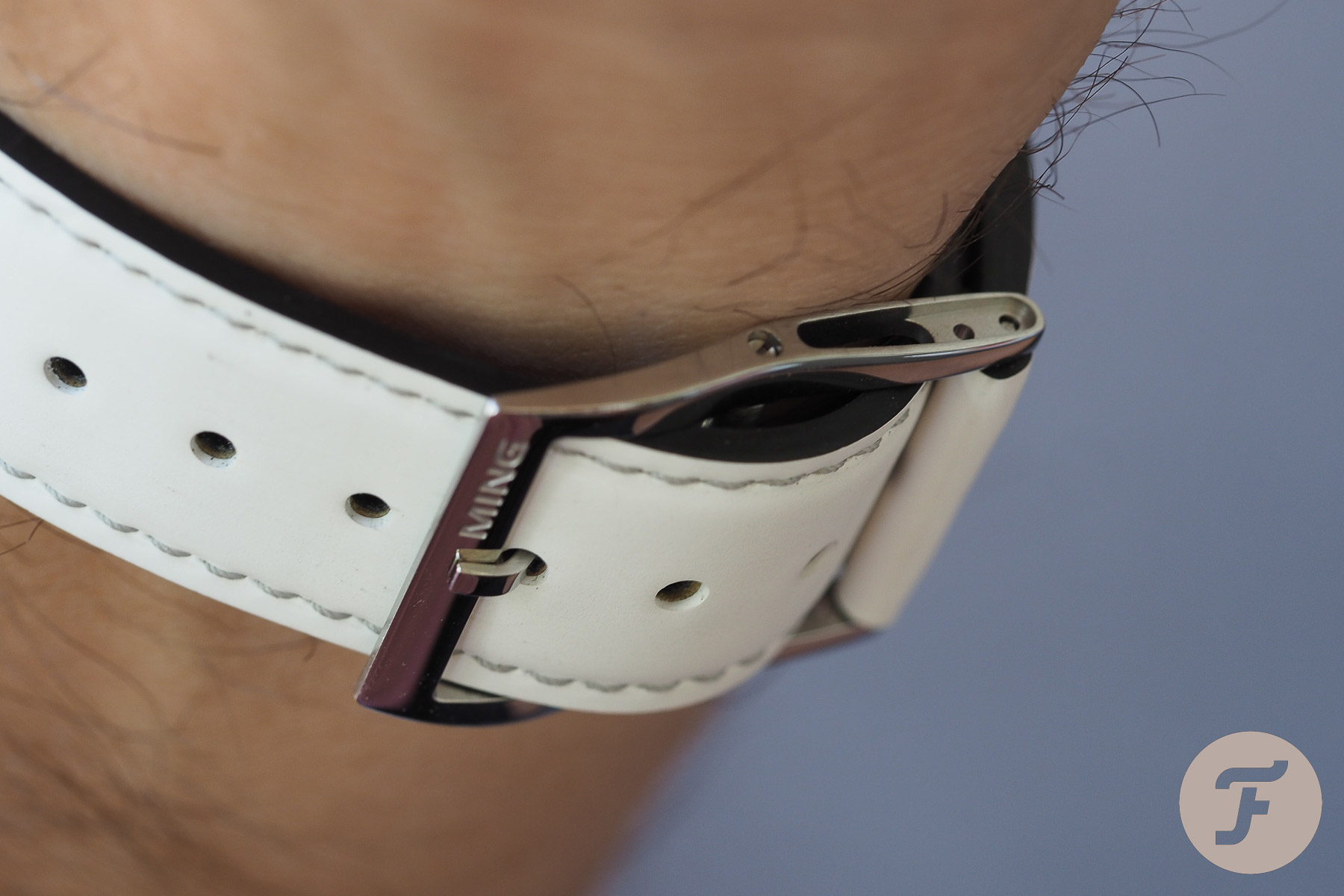 I had the chance to try this tuck buckle on the 37.07, and I’ve had a longer trial with it on my 18.01 H41 diver. It’s so simple and elegant, but it’s a real game-changer. The buckle looks normal aside from a space between the pin-buckle mount and where the buckle is attached to the strap. The male end of the strap simply “tucks” into this slot and underneath the female side. There are no more keepers to slide around and no unsightly tail, a particular problem for those with smaller wrists. The only thing I’d say is that with something like rubber or Alcantara, one needs to go one hole looser than usual to allow the tail to slide underneath. Taking it off is also a bit different as it requires “squeezing” the strap to gain some grip when pulling the tail out of the slot. Still, it’s a great idea, and I really enjoyed it during normal wear, which included some heavy time in the pool. The good thing is that MING has launched new straps for sale and the tuck buckle is part of the package. 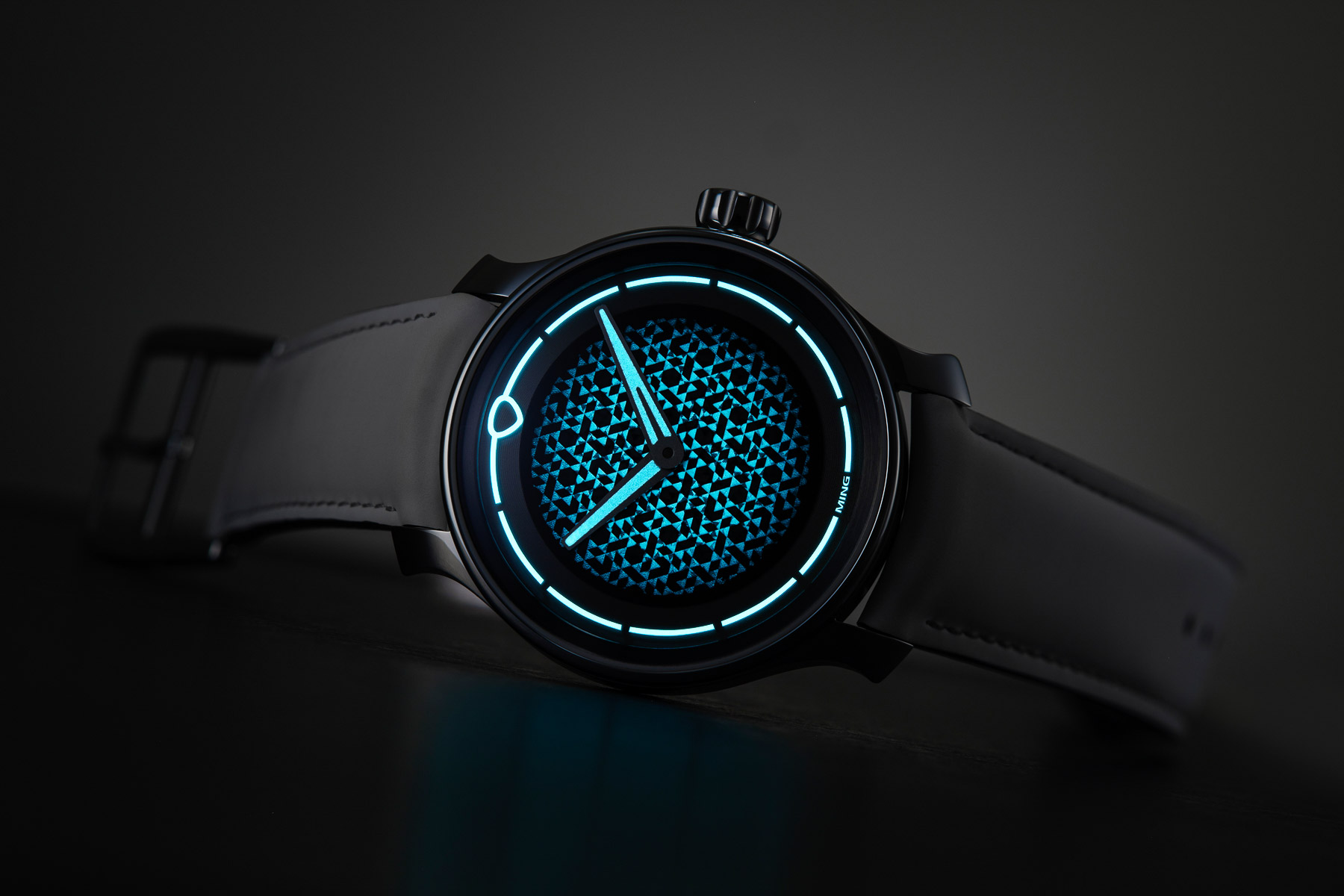 The MING 37.07 will sell for CHF 3,250. Buyers will place a 50% non-refundable deposit upon ordering and the rest when deliveries begin in May 2023. In my view, that pricing is very much in line with what one expects for a MING. As far as availability, this isn’t a limited edition per se, but the ordering windows will be tight. MING will offer two 15-minute windows to place orders. Both will occur on July 29th with the first at 2:00–2:15 AM GMT and the second from 1:00–1:15 PM GMT. All of those who place orders within this timeframe will be guaranteed to receive a watch. The reason for the short windows? Production is difficult on these watches, and deliveries are already scheduled for 2023. Offering more would simply lengthen that timing. 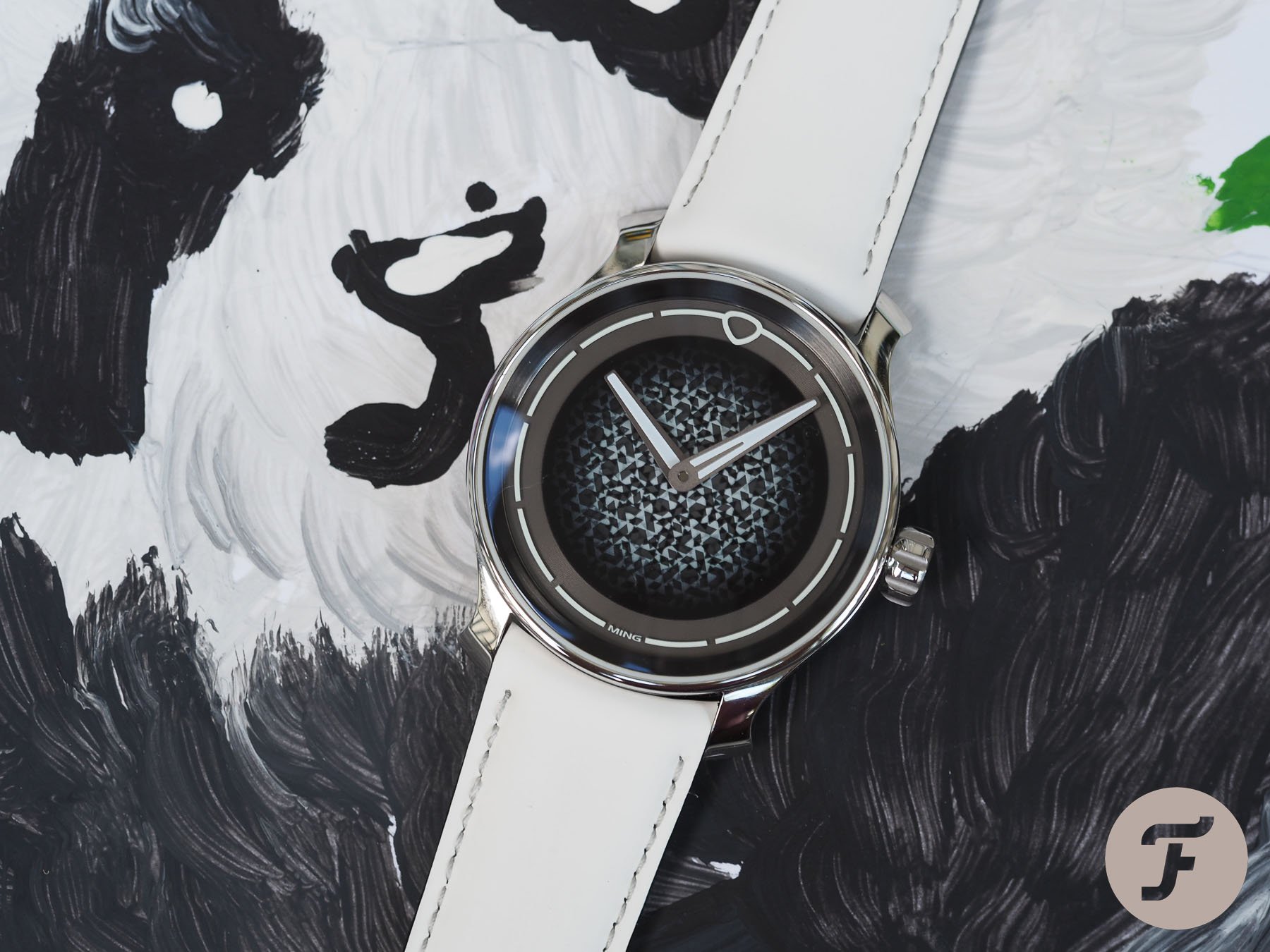 For me, the MING 37.07 is a real success. It’s a fantastic way to celebrate the fifth anniversary of a brand that I have truly come to enjoy. The details are beautifully executed, it bears a hand-wound movement, and it comes at a price that longtime fans should be able to consider. Five years on, I still look forward to every announcement from MING. Needless to say, the next five should prove very exciting indeed.

Find out more about the 37.07 on the official MING website.