Climate change is not about the world getting hotter. It’s several accelerated changes that are knocking the cycles off balance. Environments are simultaneously drying out while rising sea levels risk flooding. Responding to these peak weather events requires dedicated task forces stationed in the most affected areas. That’s where Coulson Aviation comes in. This Canadian aerial firefighter crew tackles wildfires across the globe in places of threat. Using a variety of aircraft, vast quantities of water extinguish fires near built-up settlements. But it’s not just about responding to the issues. As part of Oris’s “Change for the Better” campaign, the brand seeks to help others understand and prevent future climatic events. To bring awareness to Coulson Aviation’s work and the problems we all face is a new collaborative limited-edition Oris Big Crown ProPilot Coulson watch. As you’ll see, there is more to the watch than the eye-catching dial.

During my visit to Las Vegas in 2011, I went on an excursion to the Hoover Dam. The construction and history are impressive. But what shocked me was the separation of the original waterline from the formation of Lake Mead to the far shallower waterline at the time. In 2022, that waterline, also known as a “bathtub ring,” is so low that the original drinking-water-intake valves sit above the water level. The extreme levels of drought and reduced snowfall in the Rockies wreak havoc in the hot, dry areas of Nevada and southern California. This is why this region is Coulson Aviation’s most frequented emergency response to wildfires in the Northern Hemisphere. Armed with a fleet of specially modified aircraft, including Hercules C-130s, Sikorsky S-61 helicopters, Boeing Chinook CH-47 helitankers, Sikorsky Black Hawk UH-60 helitankers, and even a Boeing 737 FireLiner, Coulson operates in treacherous conditions. 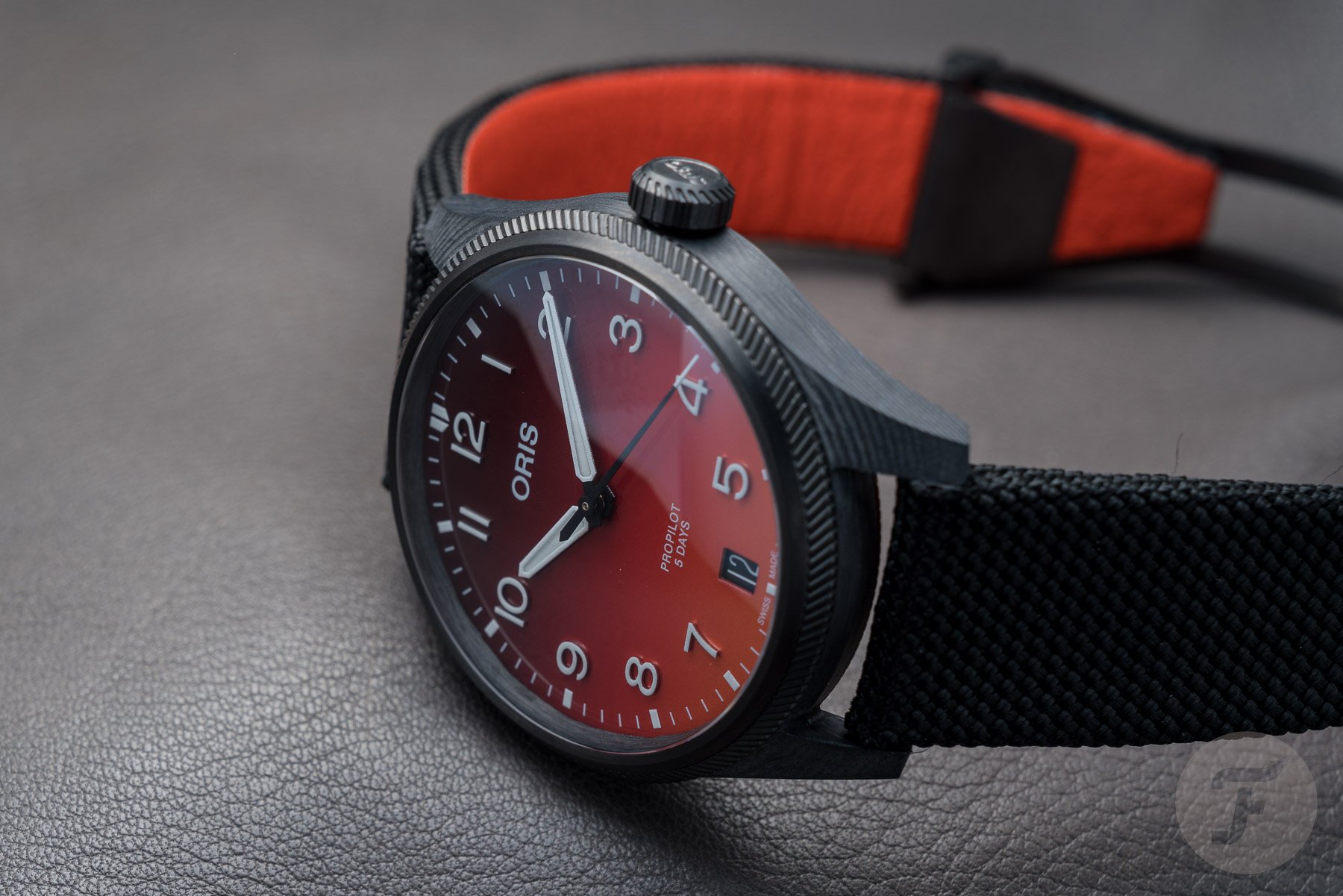 To represent the fierceness of wildfires, the new Oris Big Crown ProPilot has an orange-to-red gradient dial with applied luminescent numerals at each hourly interval apart from the date at 6 o’clock. Maintaining high levels of legibility are the white baton hands with Super-LumiNova inserts that glow turquoise. The contrasting matte black seconds hand also has a white tip, which does not glow. The effect of the eye-catching dial is much more convincing in motion than in still photographs. While the dial represents fire, it also reminds me of a city’s light pollution blending with the night sky. The smoky 12-o’clock side gradually fades into the dark bezel and case. But this is no ordinary blacked-out watch case. As far as I know, this is the first 3D-printed carbon fiber watch case, at least from the Swiss. 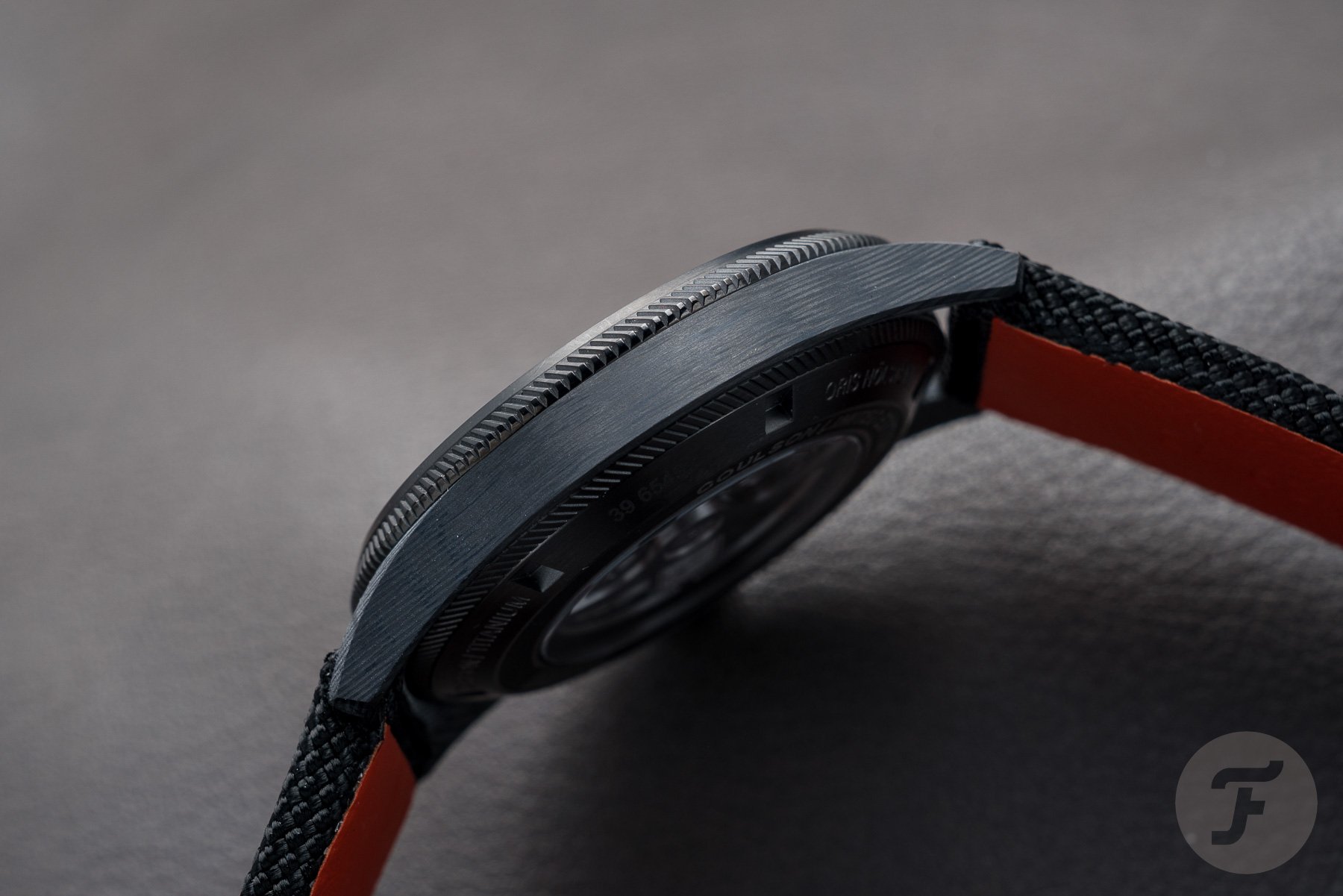 Created at Switzerland’s ETH Zürich university, the case is milled from a block of carbon fiber layers using a 3D-printing machine. Unlike the Carbon NTPT cases of Richard Mille timepieces, the lines and patterns of the ProPilot case are precisely intentional. In comparison, Richard Mille’s process creates a random and unique pattern with each case due to the assortment of layers. I’ve always enjoyed this woodgrain effect in carbon watch cases and prefer them to appear imperfect, instead of the even distribution in the Panerai Carbotech models. The resulting appearance of the Oris reminds me of the dashboard of a Mercedes saloon car. Speaking of Mercedes, carbon fiber is very synonymous with Formula One racing cars and known as a lightweight and strong material. Outside of the sport, the material is also used extensively in aeronautics, tying it back to Coulson Aviation. 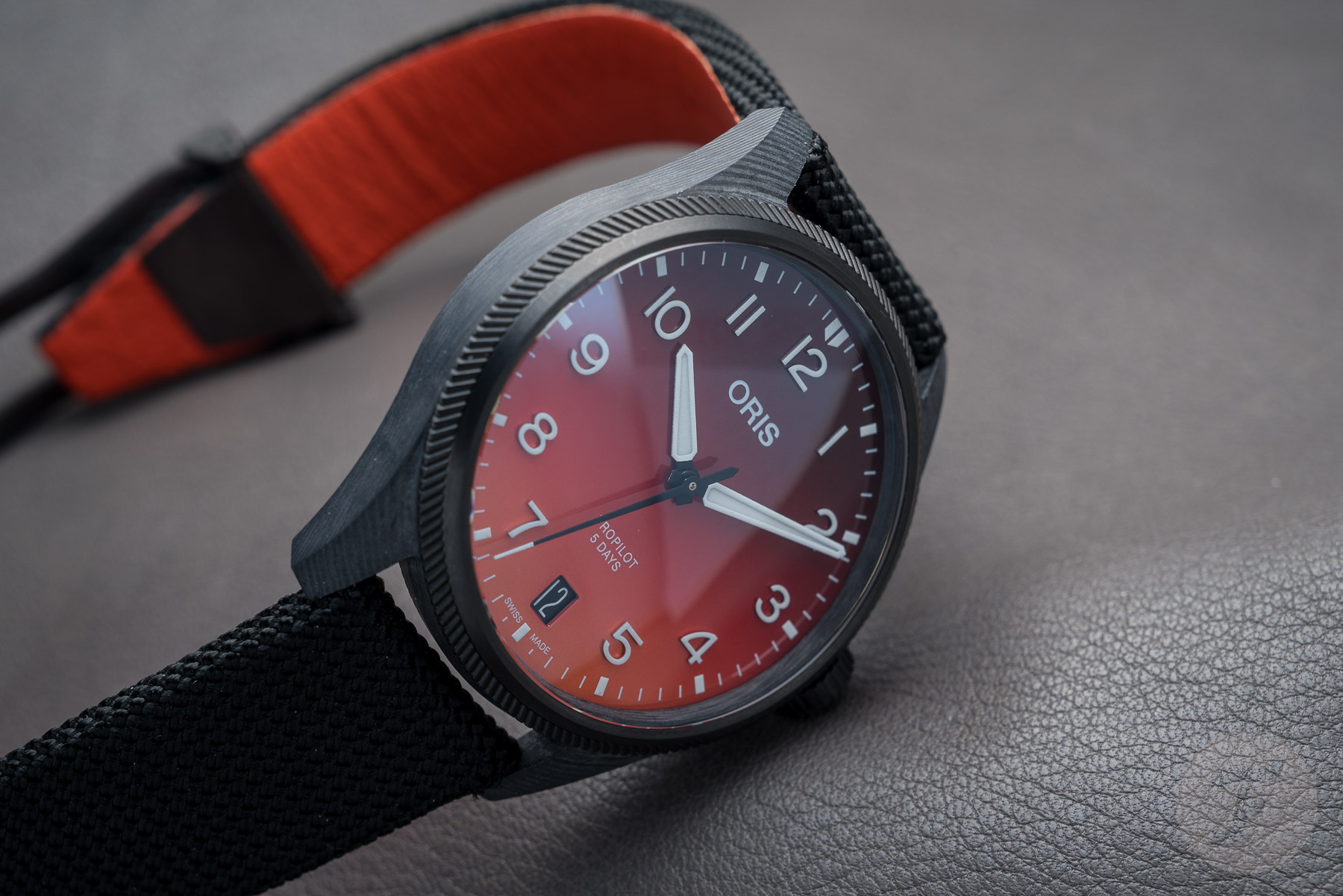 Light as a feather, stiff as a board

The more intricate elements of the case construction are in gunmetal PVD gray titanium, such as the fixed turbine bezel, screw-down crown, and outer case back. Combining these lightweight and rigid materials nets a 65g mass — practically a featherweight — including the venerable Calibre 400 that powers the time and date. The “5 Days” on the dial indicates the mighty power reserve. But the long-lasting mainspring power is not the only benefit to Oris’s proprietary movement over the previous options from Sellita. Calibre 400 is also anti-magnetic and aligns with COSC tolerances, though it is not COSC-certified. Over five days with this ProPilot, I saw a gain of 23 seconds. This averages to +4.6 seconds per day, which is within COSC’s acceptable daily deviation of +6/-4 seconds. On the case back, you can view the smiling Oris Bear silhouette in the mechanism via the sapphire exhibition window. 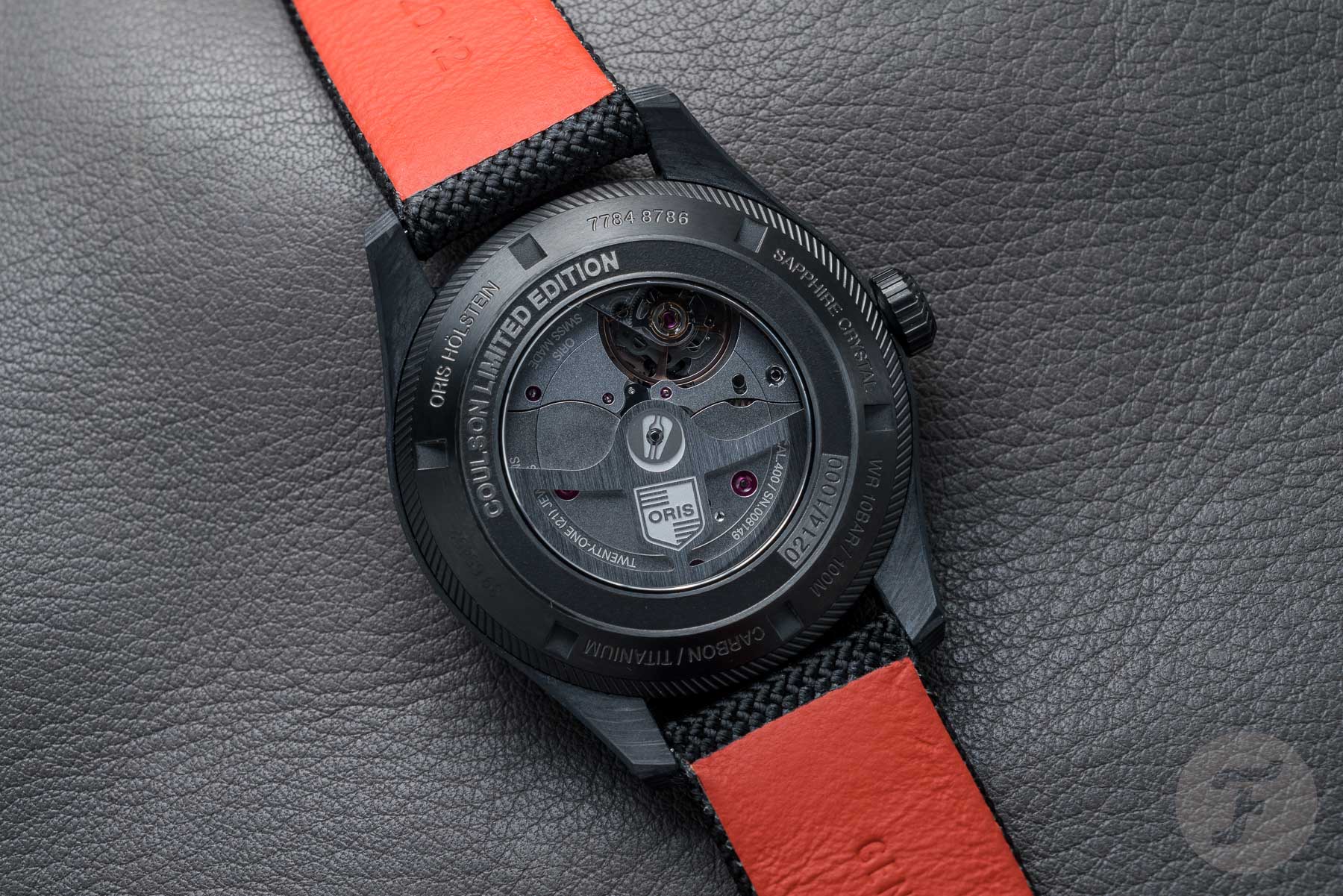 Alas, we arrive at my main niggle with this construction. While the 41mm case is impressively svelte for a pilot’s watch at 12.2mm thick, the titanium ring around the sapphire display window cuts off a good portion of the view. The ring contains the limited edition number of 1,000 pieces but hides some of the caliber. For me, the purpose of a movement window is to witness the mechanics at play. The most animated is the oscillating balance wheel. In this construction, the ring cuts off a quarter of the wheel and the outer edges of the automatic winding rotor. This is in contrast to my Oris Aquis Calibre 400, which allows a full view of the movement in all its smiling-bear glory. While I can accept that carbon fiber is a new avenue for Oris, the titanium element of the case back is most at fault for blocking the view. 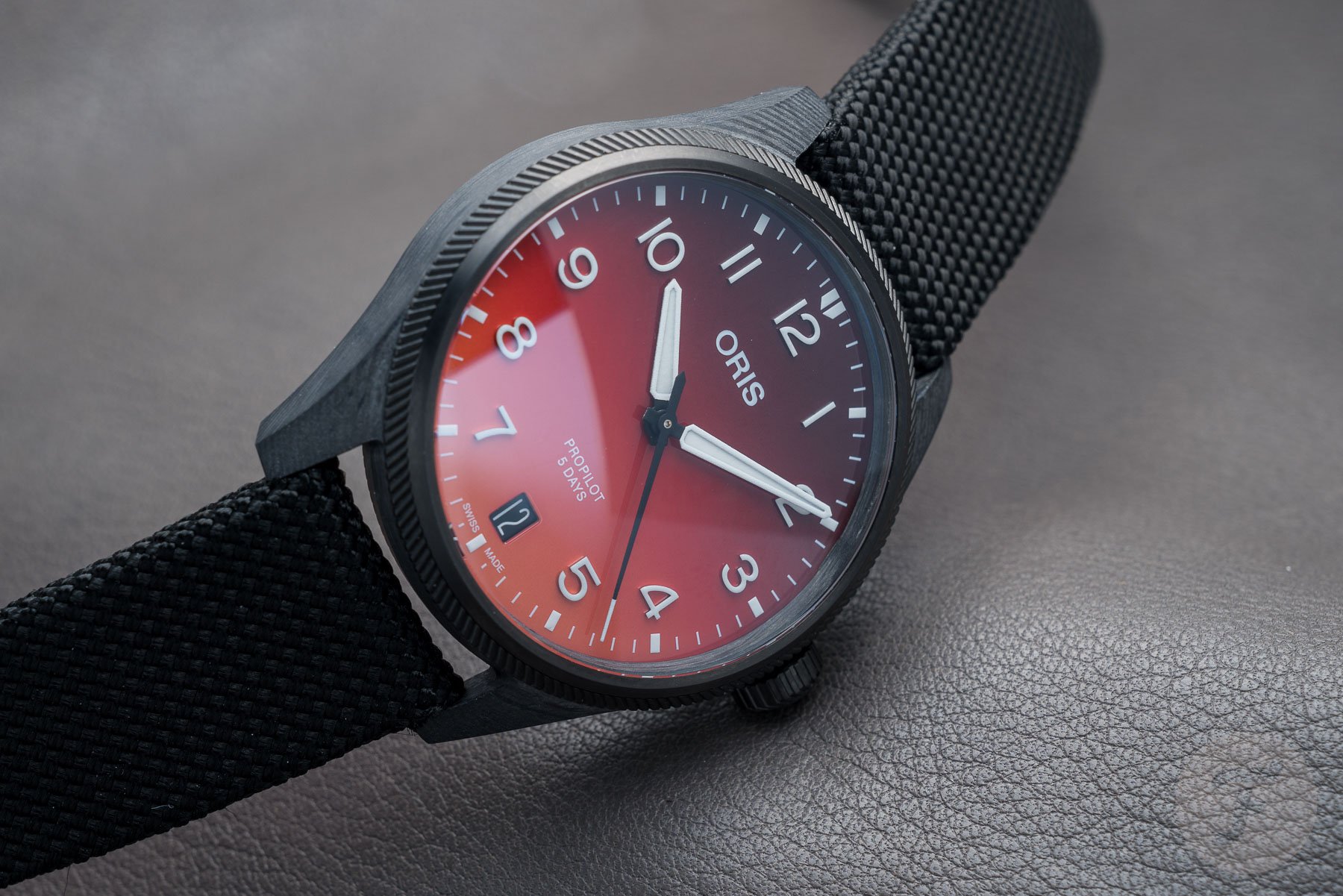 The new method of 3D printing watch cases is an exciting development, especially with Oris. The texture is much more tactile than smooth metal cases, but the case lines and edges are still precisely cut. The dial is a fascinating representation of the noble work undertaken by a self-funded company wanting to respond to and prevent catastrophes. Coulson Aviation’s service costs tens of millions a year to maintain, and Oris drawing attention to it highlights the initiative. The watch is incredibly lightweight, along with the textile strap with orange leather lining and infinitely adjustable titanium “LIFT” clasp. The Oris Big Crown ProPilot Coulson Limited Edition is an effortless watch to wear and enjoyable with the fire ombré dial. With its 10 ATM of pressure resistance, legibility, and 120 hours of power reserve, the Coulson LE is also a capable choice for pilots and enthusiasts. 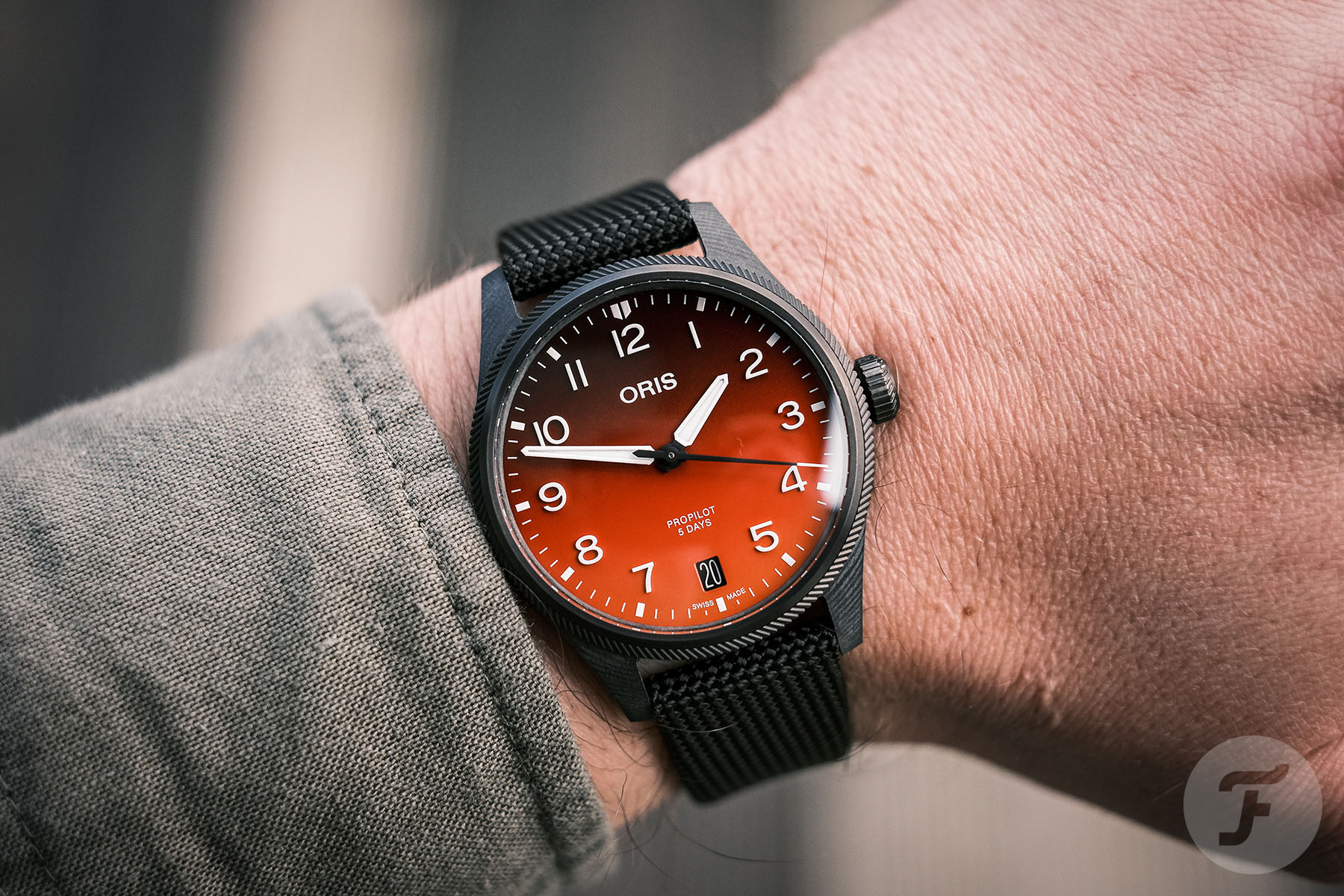 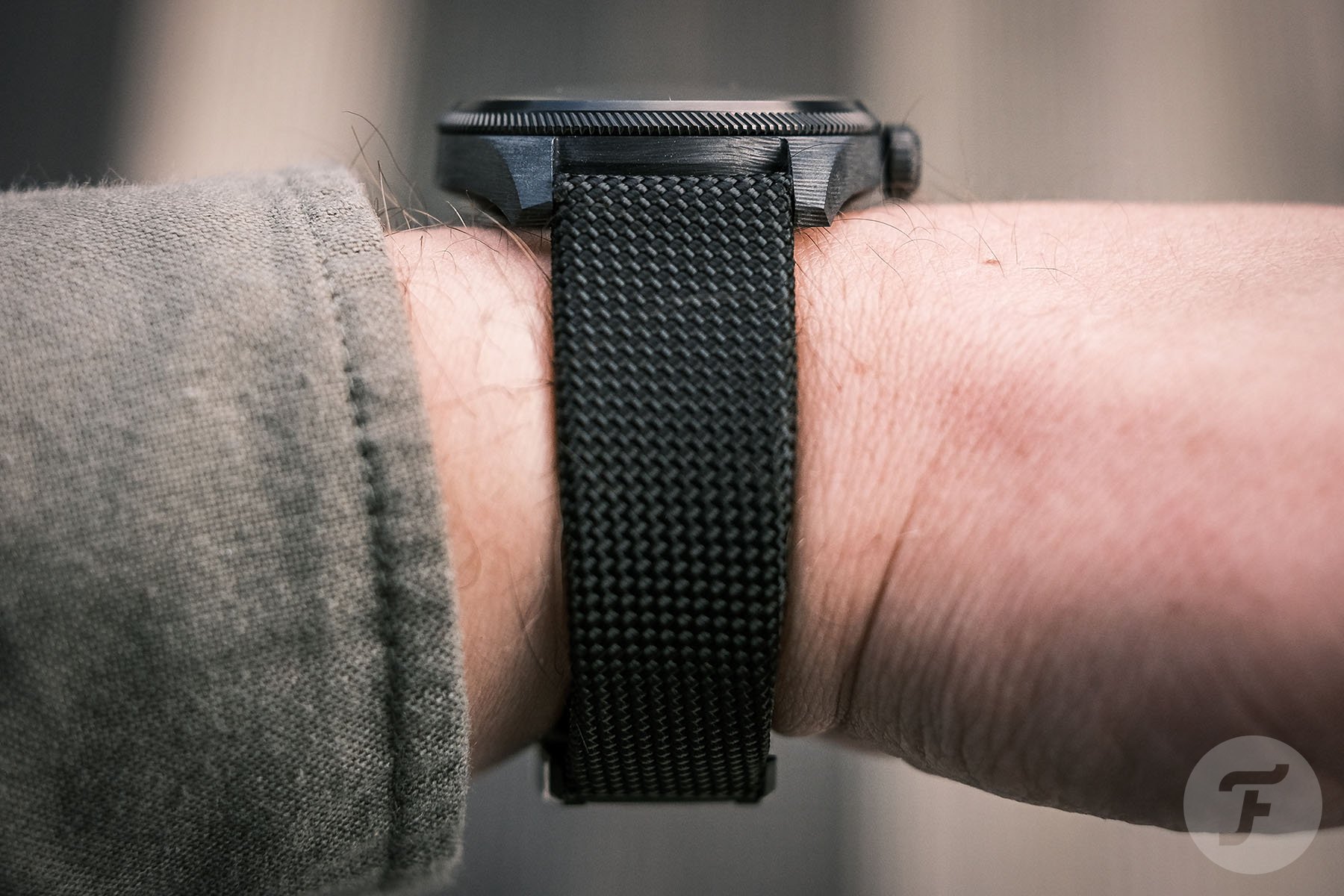 The watch is limited to 1,000 pieces worldwide for CHF 4,200 and is available as of today, November 22nd. You can also extend the warranty to ten years by signing up and registering the watch with MyOris.com. Although, if used frequently for underwater excursions, it’s worth checking the seals every couple of years. Check out the Oris website here for more details. Also, let me know what you think of this new Oris watch in the comments below.