After a long wait, I finally spent some meaningful time with the Oris Divers Sixty-Five Chronos Limited Edition. Released in February this year, this Divers Sixty-Five is a 200-piece collaboration between Oris and WatchTime’s sister publication, Chronos. The Divers Sixty-Five has had a fair share of partnership creations, notably with the Carl Brashear Foundation. But its latest special edition with a media publication demonstrates its versatility. Originally, it may have seemed like a flight of fancy for Oris to reinterpret its vintage skin-diving watch from the ’60s. The Divers Sixty-Five, however, is now a full-blown collection of its own. The range currently sits 24-strong (with alternative strap and bracelet options on top). So, does the Chronos Limited Edition stand apart in such a crowded catalog? Let’s find out.

In its seven-year tenure, the Divers Sixty-Five has had quite the stylistic journey. From the “far-out” exploded numerals in 2015 to the statelier dot-and-dash indices, the skin-diving watch has matured with time. I prefer the older dials, but I can only assume the simplified layout is a more potent sales magnet. However, when it comes to the dial designs, the sky’s the limit with the Divers Sixty-Five. We’ve seen pastel homages to candy floss (“cotton candy” in North America) to an ombré dial in sunset brown. While the selection is not as wild as the Oris Aquis, the Divers Sixty-Five is still comfortable deviating from its vintage tones. That said, my initial impression of the Chronos Limited Edition was appropriately frosty. It may have had something to do with the release date in February, but the icy blue gradient dial with silver hands and indices gave it a washed-out appearance. 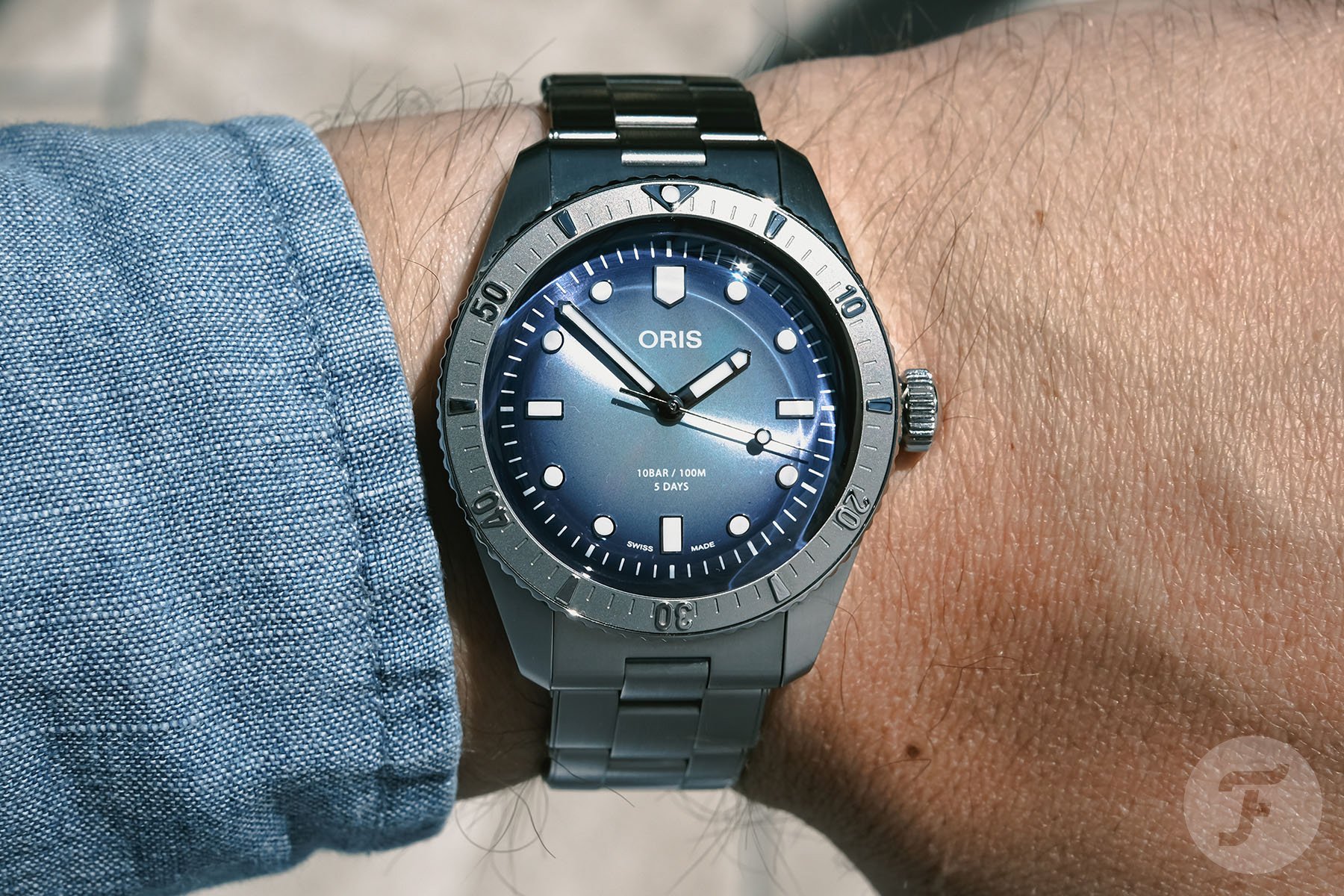 During the launch, many made favorable comparisons to the Oris Aquis “Lake Baikal.” The Lake Baikal bases its style on the world’s deepest lake when frozen during the harsh winters. As such, the dial has an inky blue perimeter that shifts to a silvery center. But the big difference from the Lake Baikal is the Chronos edition’s steel relief dive-scale bezel. Adding more silver hues to the equation reduces the visual contrast. Not being able to distinguish the indications at a glance limits the functionality and appeal of an aquatic timepiece for me. On top of that, the silvery steel bracelet contributed to my apprehension about this Oris release. While these were only my first (online) impressions of the Chronos edition, it took some time for it to return to my psyche. As summer came around, the time felt right to revisit this model and go hands-on.

The dial’s blue-to-silver transition is far more dynamic in person.

The adage “try before you buy” couldn’t be more prophetic. Admittedly, the product photography on the Oris website is of a high standard. Still, nothing can top on-wrist impressions, especially with a dose of natural light. My hesitancy towards the steel relief bezel was quashed immediately. The raised and polished numerals animate differently in motion to the matte bezel surface, enhancing legibility. Also, the dial’s blue-to-silver transition is far more dynamic in person. The effect is quite cosmic in its nature and offers more depth and distinction than my predictions. In the end, the Chronos Limited Edition is quite a fitting tribute to the psychedelic ’60s. 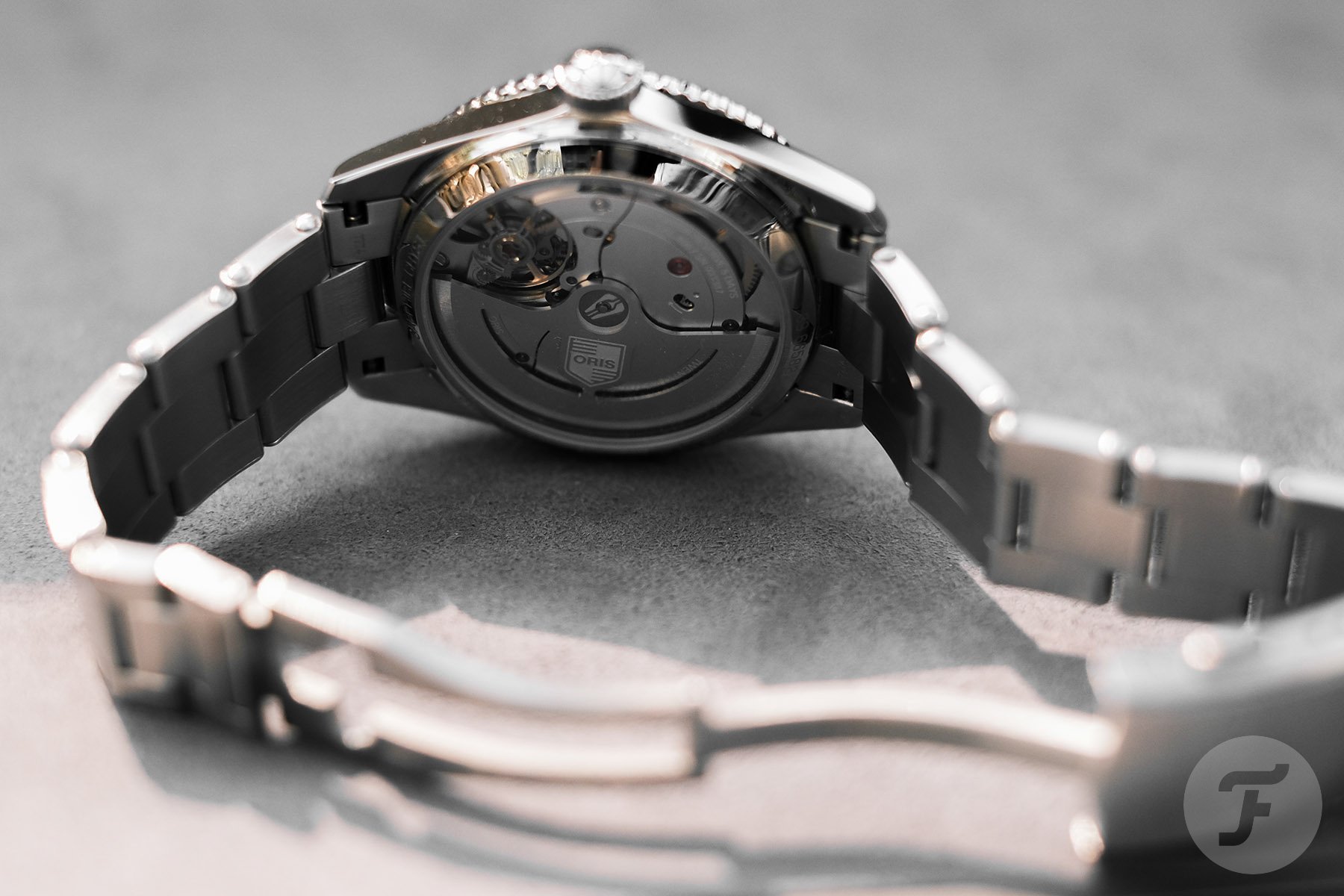 Interestingly, the Chronos edition is only the fourth Divers Sixty-Five to receive the Calibre 40X series of proprietary movements. Developed by Oris and produced in Switzerland by Monnat, Calibre 400 saw the light of day in 2020. Since then, the automatic five-day-power-reserve movement has spread far and wide amongst the Oris repertoire. As is the trend, the Carl Brashear was the first Divers Sixty-Five to receive the caliber. The 400 became the Calibre 401 in the Carl Brashear with small seconds instead of center seconds. But from there, the 400 iteration now powers the Mr. Porter and Hodinkee limited editions. The Hodinkee edition is possibly the closest in terms of framework to the Chronos edition. Both the Hodinkee and Chronos share the slightly smaller 38mm stainless steel case with a sapphire exhibition case back. Likewise, both watches are delivered on a steel bracelet with end links measuring 19mm wide.

There’s a propensity for the minute hand to jump when setting the time.

Regarding differences, the colors and choice of materials set the models apart. Both watches, however, opt to omit the date window. It adds to the purity of the design, though some argue it lacks a crucial function. I recommend the Mr. Porter Limited Edition with Calibre 400 and a date window for them. I can also foresee Oris introducing more Divers Sixty-Five in this format in the coming years. Unfortunately, with the example I have here, there’s a propensity for the minute hand to jump when setting the time. It’s a notable defect seen in many Calibre 400-powered watches. When I line up the minute hand to the upcoming position, it jumps forward or backward by a full minute when pushing in the crown. 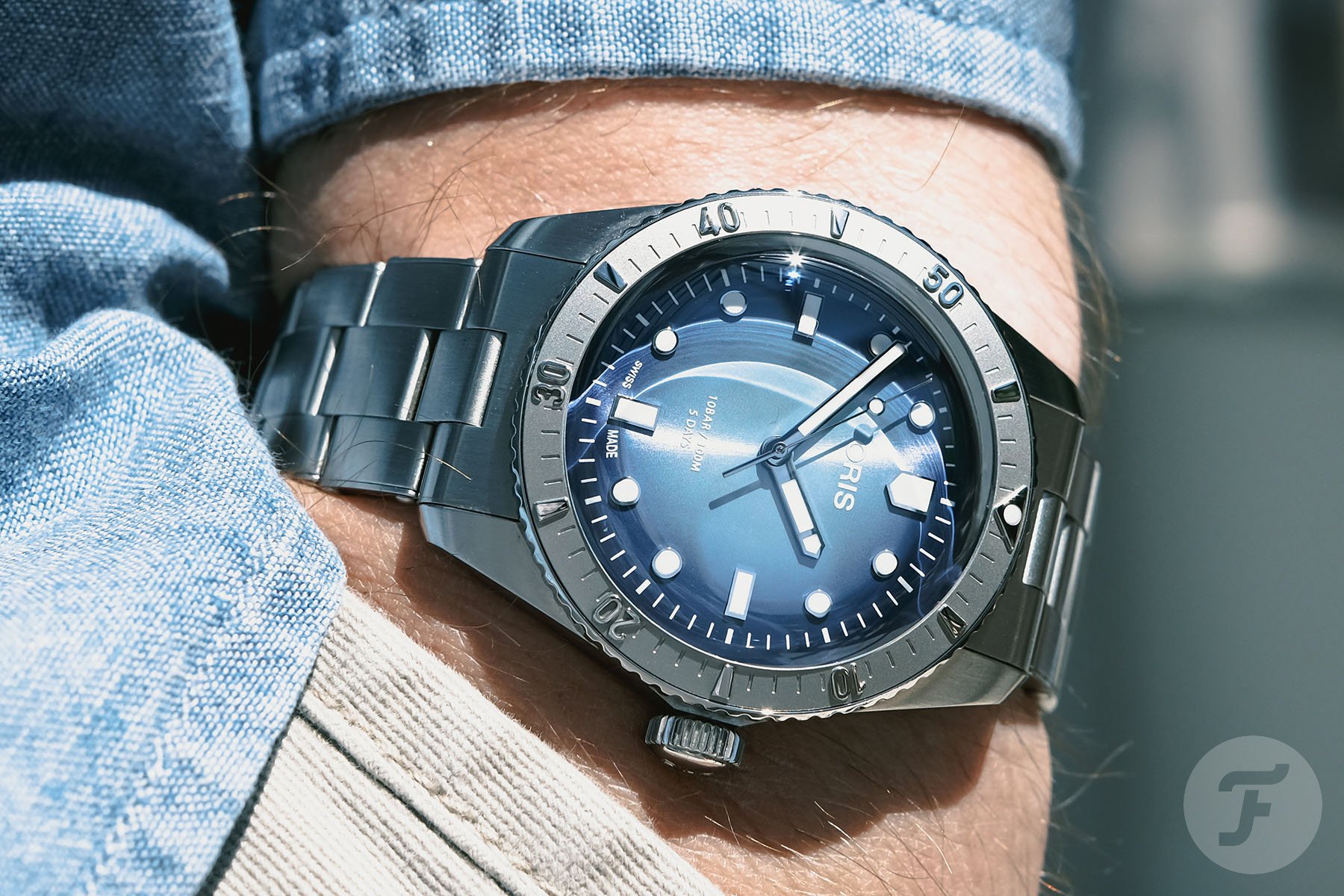 If you’re aware of this strange behavior of the minute hand, you can try and account for it. You can calibrate the time setting by placing the minute ahead or behind where it needs to be. But not knowing which direction the hand will land when pushing in the crown takes a little adjusting. It’s not ideal, and I hope Oris irons out the kinks as it further develops the Calibre 400. On the wrist, the 38mm case feels sublime. The diameter is closer to its ’60s skin-diving forebear. Yet, thanks to the vintage cues, it works remarkably well for modern tastes. Considering my experience with the regular 40mm Divers Sixty-Five, I felt it would be too small. But any preconceptions of size dissipate when clicking the clasp and rolling my wrist.

The imitation rivets on the external links may be a heritage nod too far, but they are relatively unobtrusive in my view. Having such a rich history deserves a link to the past. I still appreciate the dramatic doming of the sapphire crystal that sits over the dial. It distorts the blue edges and adds to the “groovy” tie-dye effect. Overall, my time with the Divers Sixty-Five Chronos Limited Edition was a surprise and delight. This is still a capable sea-faring timepiece with 100 meters resistance and a five-day movement. But the dial steals the show in tandem with the steel relief bezel. It creates this silvery cosmic effect that’s not as monotone as I originally expected. The Chronos Limited Edition is limited to 200 pieces online and in boutiques for €3,400 ($3,950 / £2,900). You can learn more about the Oris Divers Sixty-Five Chronos here. 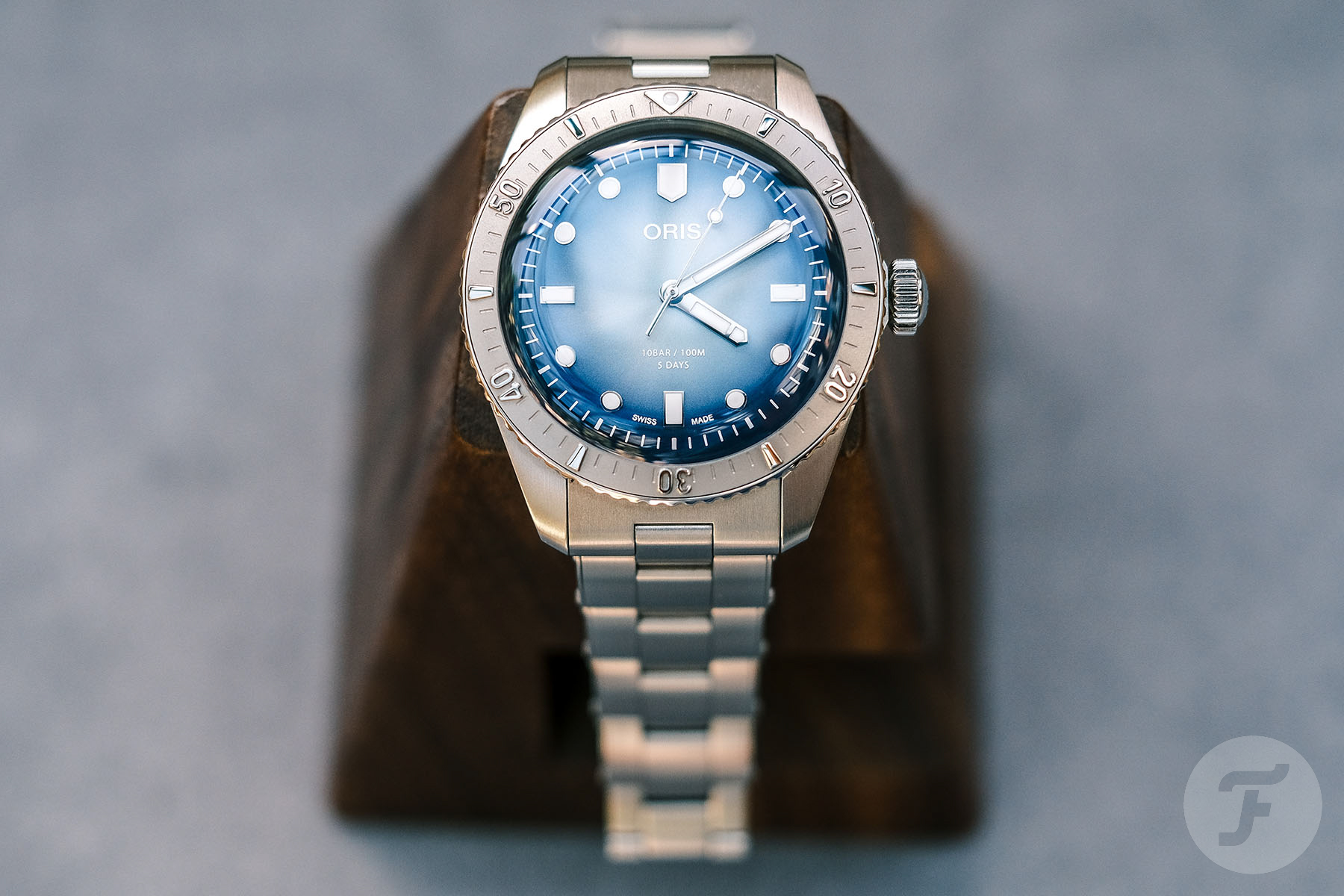 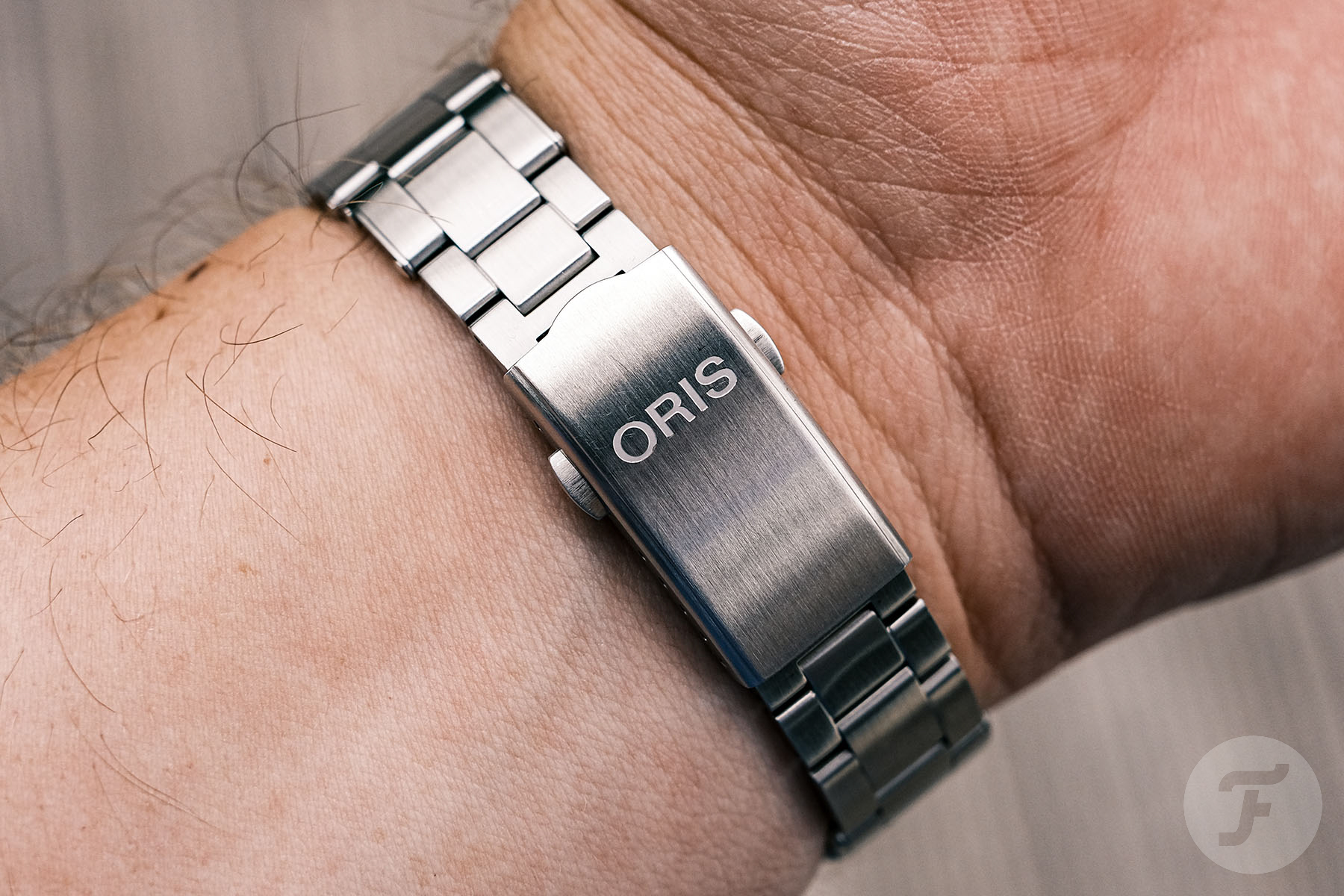 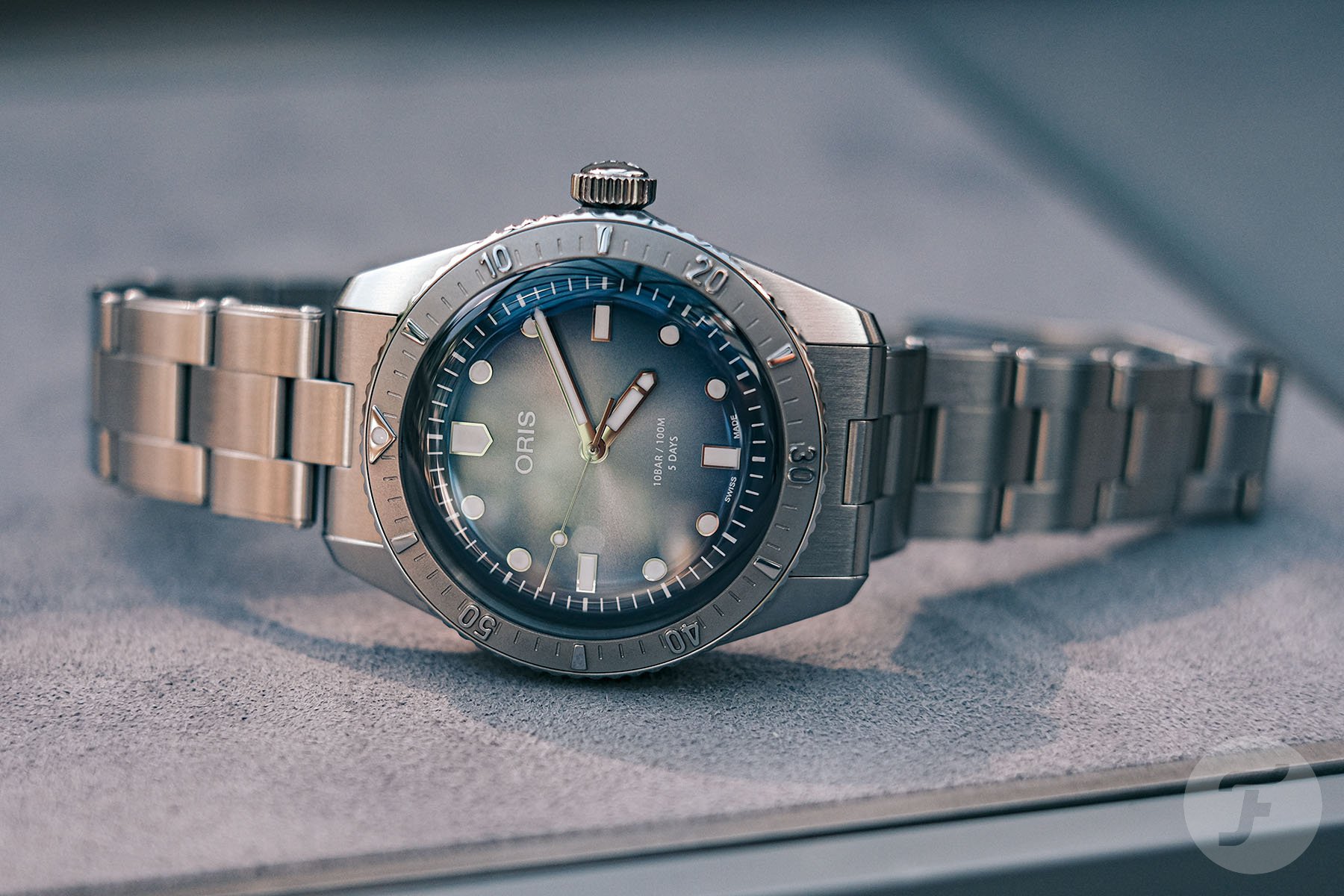 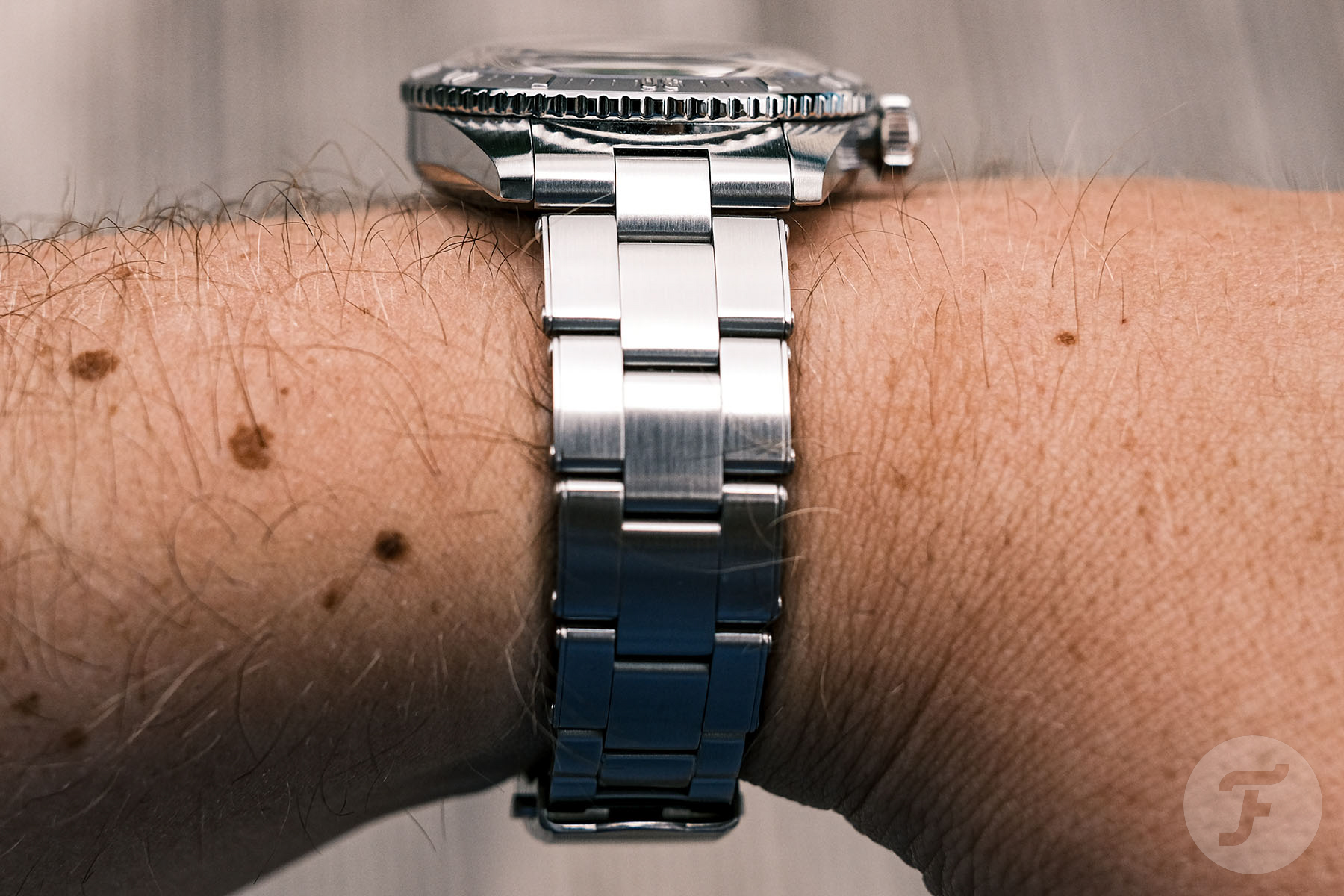