Earlier this year, Oris dropped the third generation of the Carl Brashear Limited Edition. As with the previous two Carl Brashear watches, the popular Divers Sixty-Five is the base of this creation. Yet, for the first time, within the bronze Sixty-Five case is a new proprietary Calibre 401 movement. But how does this new watch compare with the regular SW200-powered Sixty-Five?

It’s now a regular occurrence that each new Carl Brashear dive watch in the collection adds another string to Oris’ bow. For the inaugural Carl Brashear, Oris gave us the first-ever bronze case Divers Sixty-Five. This watch was one hot tamale back in 2016. I distinctively remember the grudge match that ensued with fanatics desperate to get their hands on one of the 2,000-piece limited editions. Since then, Oris has doubled down on the bronze game, giving us a host of configurations, including a full bronze link bracelet. 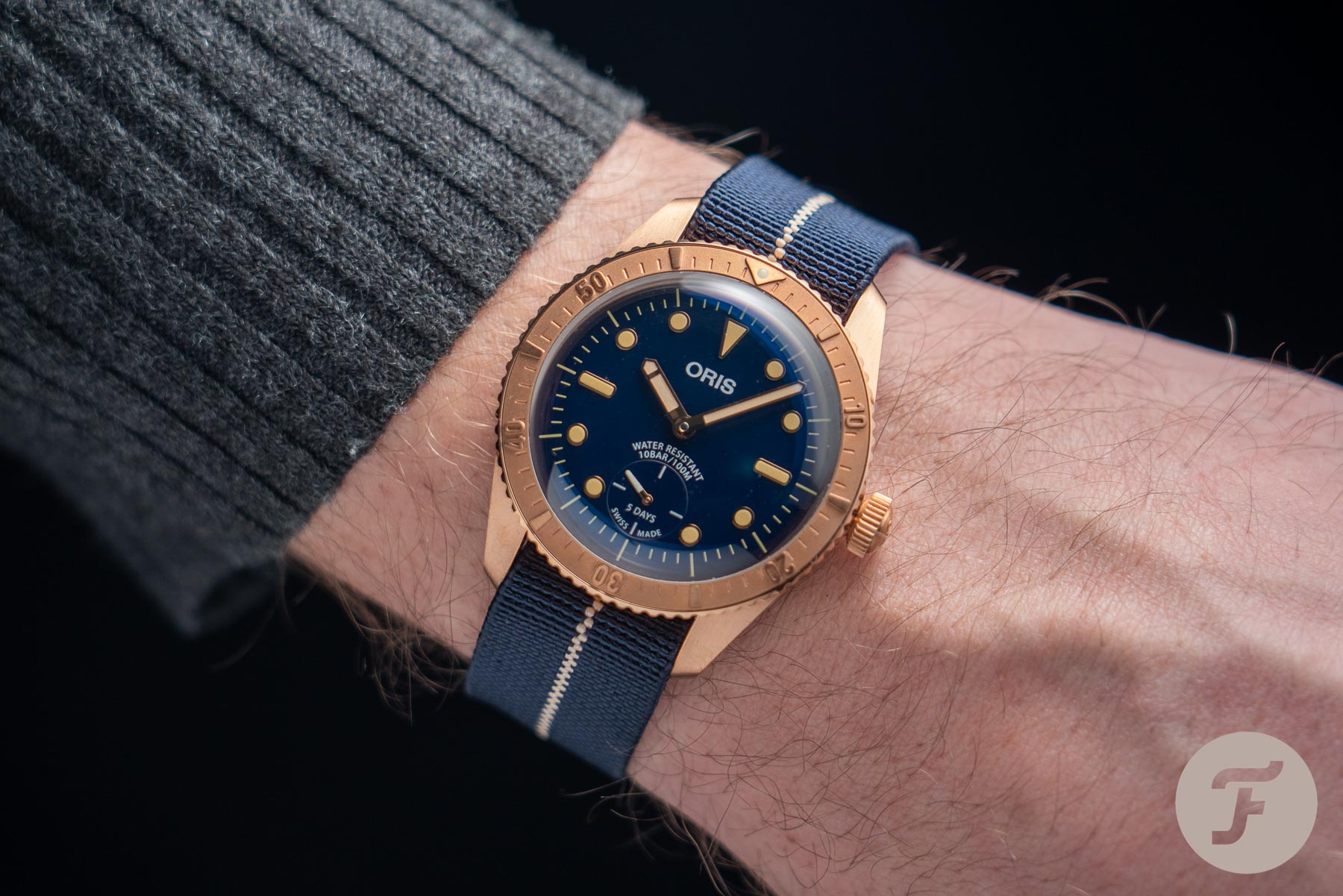 The follow-up Carl Brashear brought the chronograph module to the Divers Sixty-Five, also within a bronze case. On paper, the CB chronograph was a hard sell. However, by adding a complication to the Sixty-Five, it loses touch with the skin-diver heritage models of the ‘60s. Yet, Oris nailed the concept once again. The shelves were, figuratively, left empty as buyers clamored to own one. The second outing was not as impactful as the first as I found the considerable height of the case, due to the chrono caliber, a little unwieldy. Still, this led to the stainless-steel regular production model that indeed found its audience.

So what does this third edition of the Carl Brashear model for 2021 bring to the fray? Well, as Robert-Jan detailed in his introductory article, the Sellita movement has been eschewed for an offshoot of the Calibre 400. When the new Oris movement came to light last year within the Aquis, we knew it would be destined for greatness within the rest of the range. We just didn’t know how soon! Only six months later, the iterative Calibre 401 now powers the smaller 40mm vintage-inspired Divers Sixty-Five. The numbering variance relates to the running seconds sub-dial at 6 o’clock as opposed to the center seconds. It’s also noticeable that the dial lacks the date window. Hallelujah! 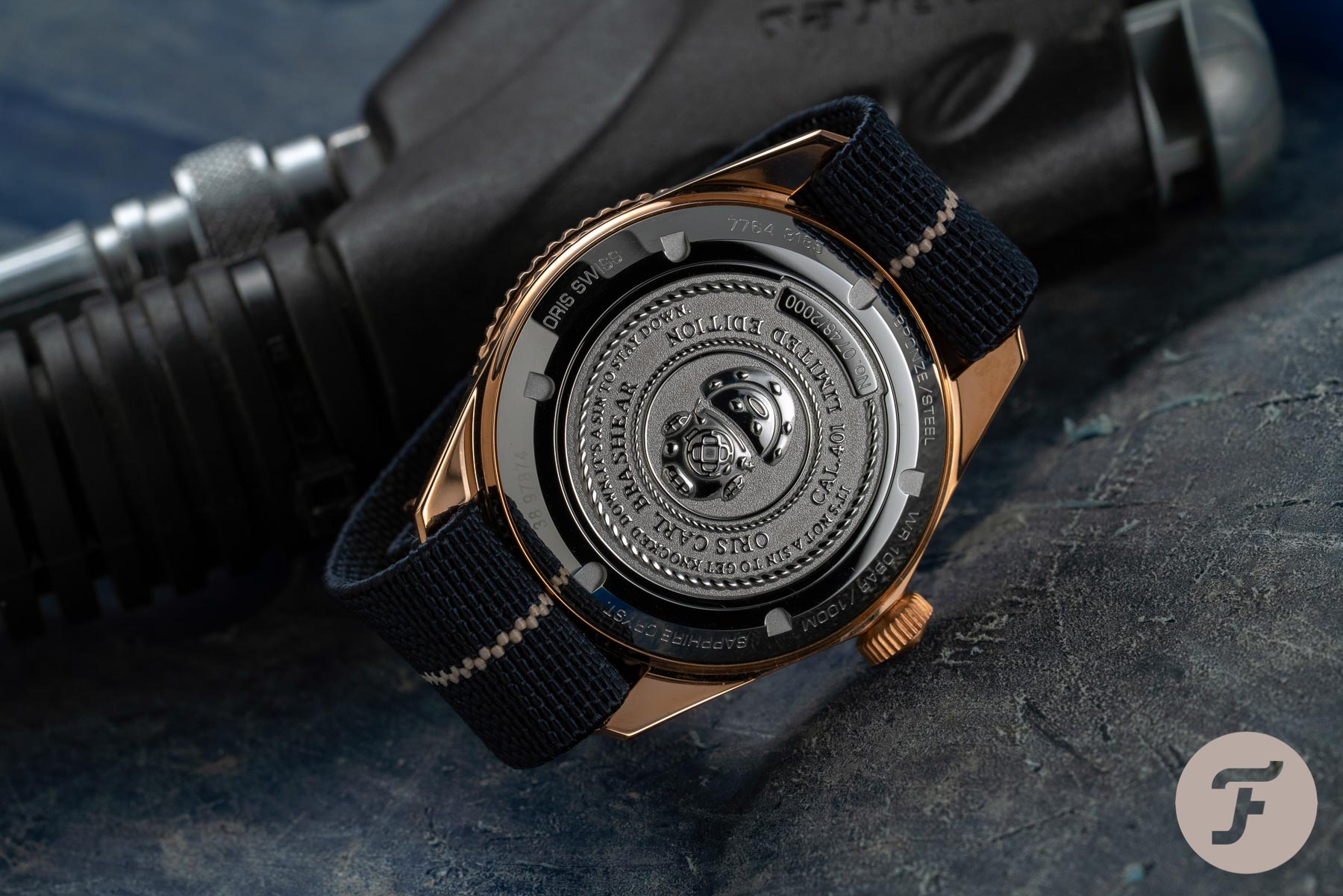 Calibre 401 within a 40mm bronze case

It astounds me that the new movement can fit within the 40mm case. With five days of power reserve and up to 2,250 guass magnetic resistance, the caliber fills the view of the larger 43.5mm Aquis via the case-back. The first Carl Brashear watch was 42mm, so I wholly expected the new-gen CB to share that diameter when I first saw it. Fortunately, in my opinion, the case reduces down to the more universally wearable 40mm bronze case. The Aquis Calibre 400 gave us a glimpse of the movement. However, the Calibre 401 is hidden behind the solid steel case-back with a motivational Carl Brashear quotation, rope motif, and embossed diver helmet logo. To uncover the mystery of how Oris fits the caliber within the 40mm diameter, you’ll have to remove this case-back. 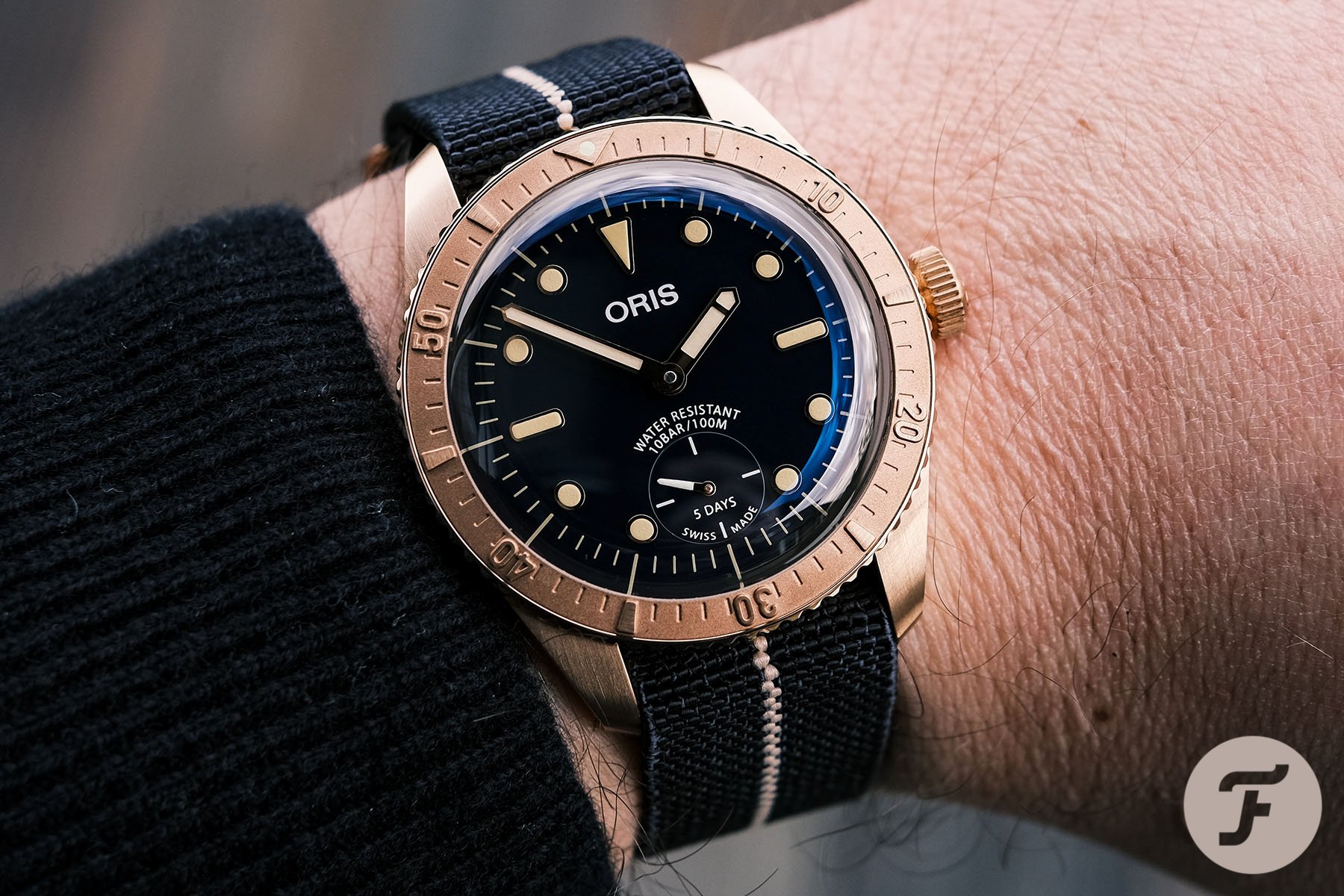 The dial keeps things on-brand with the previous CB models, featuring a matte blue dial with more curvaceous dot and baton indices. It also forgoes the shield index at the 12 o’clock position of typical Sixty-Five watches with a dagger-style marker. RJ brought this up before, but I agree that the text is a bit bottom-heavy around the sub-dial. Also, the text’s arching layout resembles a shark’s jaws opening wide for a bite of the subsidiary seconds hand. Under our studio lights, we can give you the vibrancy of the blue dial. But I also took the watch out into natural daylight. With only the single solar light source, the dial is bright blue but adopts a darker hue in the shade. When there is a shadow, the dial is almost inky black. So if these studio shots lead you to believe the dial is vivid blue at all times, note it does tone down in more subdued locations. 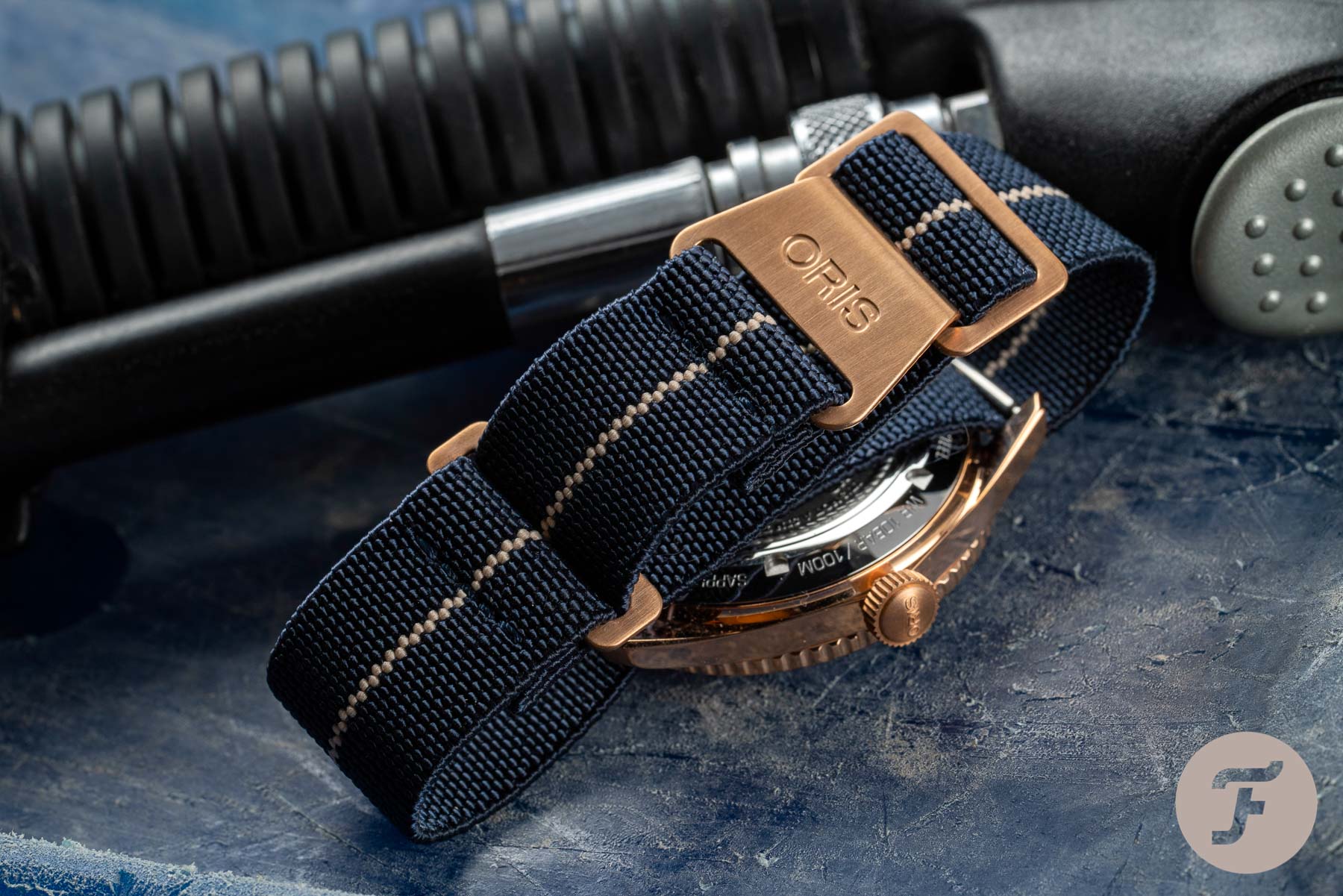 Affixing the watch to your wrist is the Erika’s Original Marine Nationale strap commissioned by Oris specifically for this watch with bronze hardware. These MN straps are elasticated and are designed to slide over your hand and form a continuous loop. A bit like a NATO without a pin buckle. I have one of these MN straps from Erika’s Original for my Tudor Black Bay that you can see below, and they are rather lovely. Although getting it on the wrist is a little tricky with only one hand available. 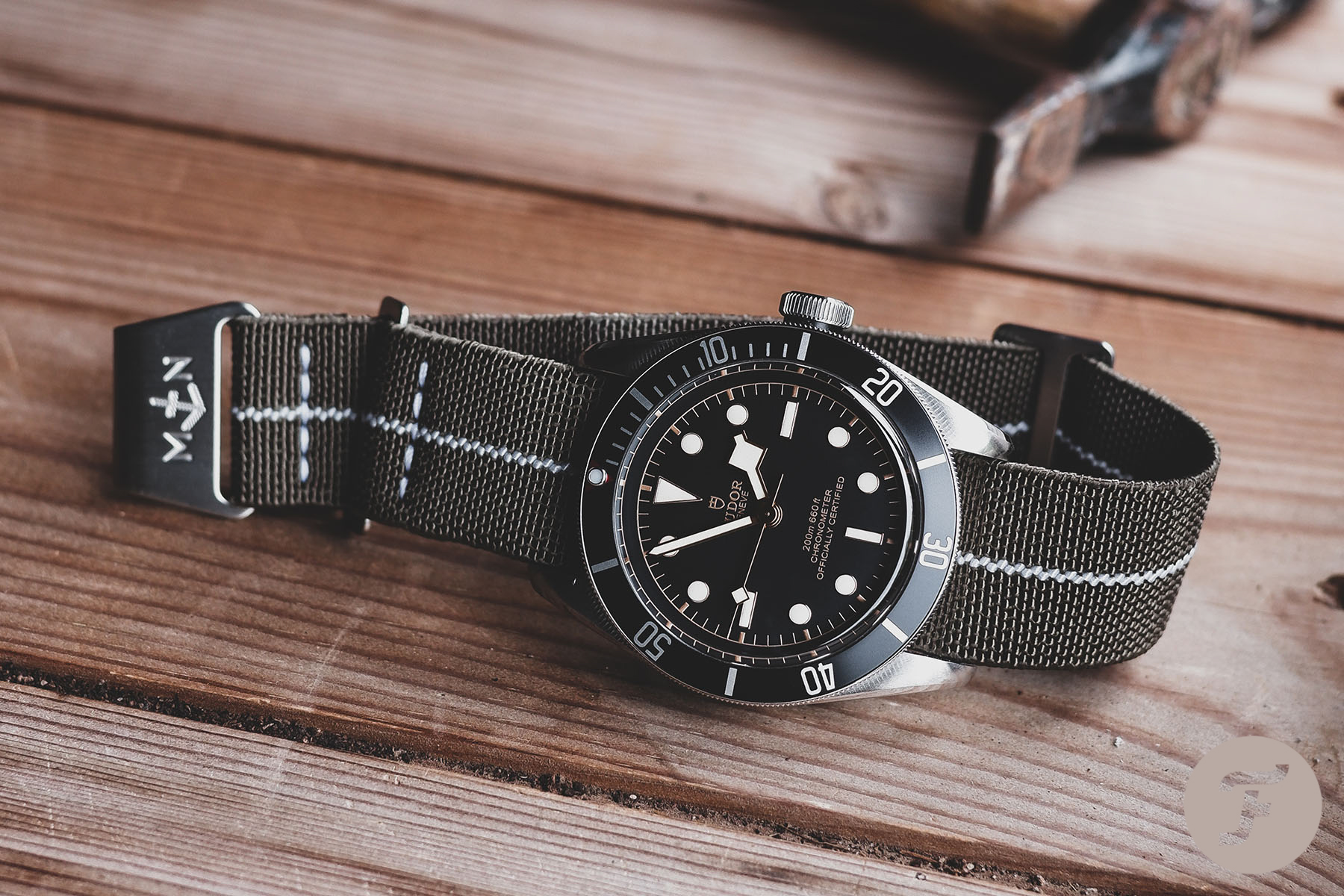 You have to catch the keeper with the hook, but the strap sometimes gets in the way. The best method is to loosen it before trying then moving the keeper to the correct tightness. Watches & Pencils captures the process perfectly in his sketch here. It’s still a little bit fiddly, but I may have a solution: If the keeper had a slight upward curve, it would be easier to catch the hook on it. In case I’m confusing you, I’ve marked the point where I think the keeper needs to change in the image below. 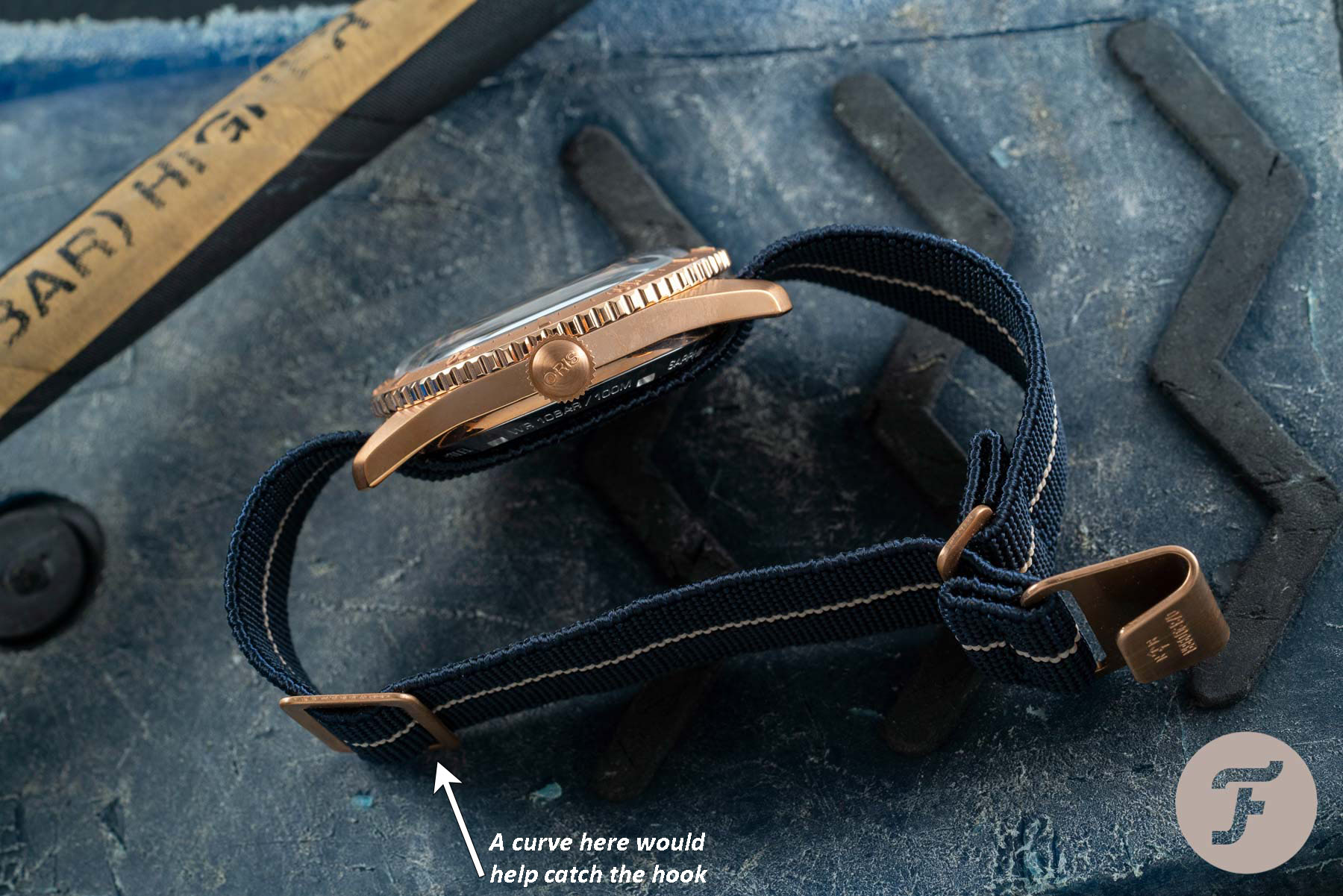 Bringing the Sixty-Five into in-house contention

The movement elevates the Carl Brashear above the regular Divers Sixty-Five. The 38-hours of power reserve for the Sellita SW200-1 is slightly annoying when you only leave it in the box for a day and a half, and the watch stops. Five days gives you the option to switch up your watches in the week, with the Carl Brashear still ticking the current time. Although any COSC certification would have bumped up the price, so you’ll have to go by my experience of only one-second deviation over five days. It makes me wonder if we will see the Calibre 401 propagate across the rest of the Divers Sixty-Five range. Or perhaps another version with the center seconds returning. For now, only this CB has this proprietary mechanism. 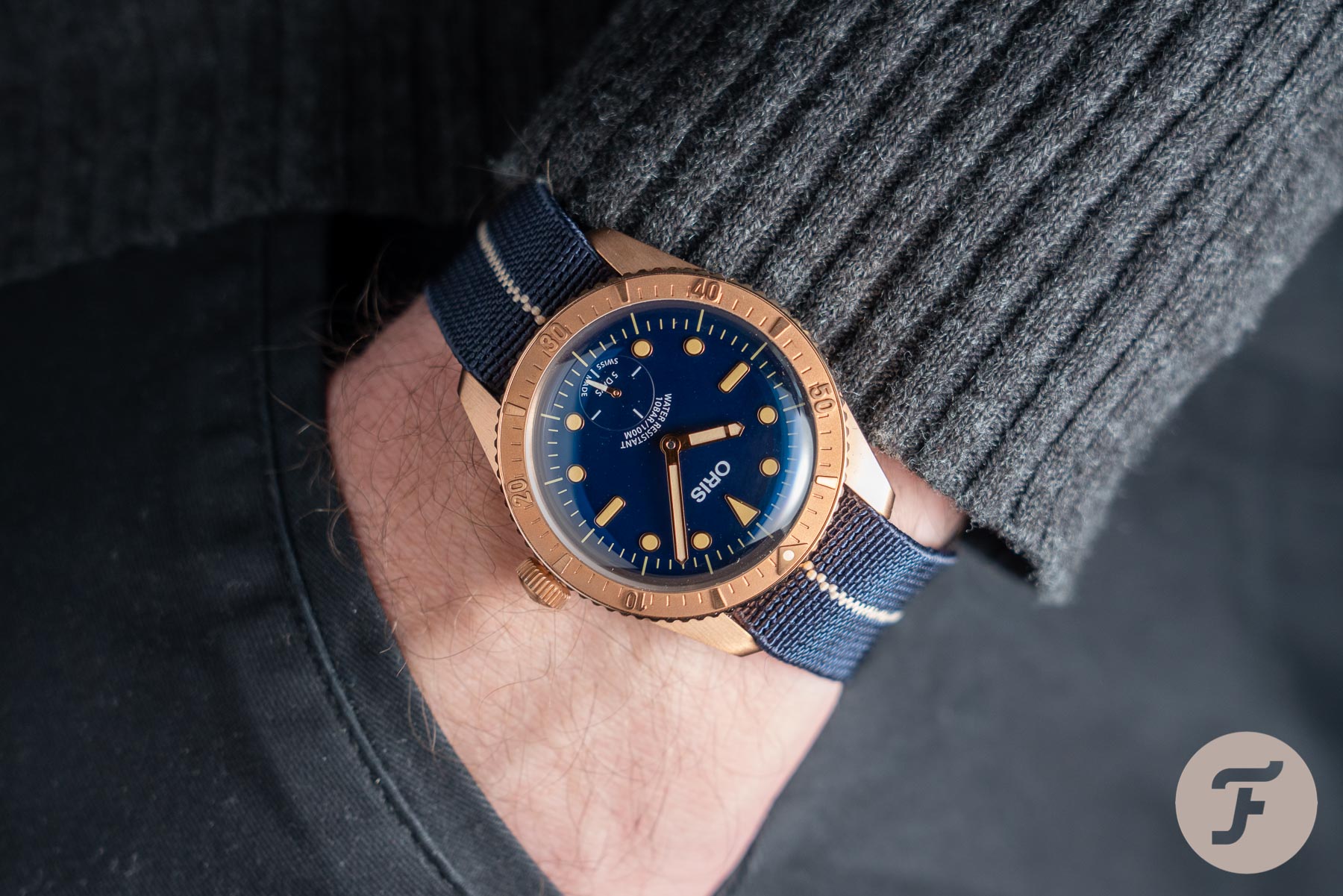 Studying the watch over the weeks allowed me to appreciate the caliber’s performance over my Sunset Brown Sixty-Five. The bronze case is a stunning hue, but it will darken with time as with other Oris bronze alloys. Or you can liven it up by carrying out a science experiment with salt water or vinegar to create a unique patina.

The story of Carl Brashear is endlessly fascinating. And I am glad to see the continuation of his legacy via the eponymous line of Oris dive watches. If you want to learn more about his story, check the link here and read more about the Carl Brashear Foundation. The Oris Divers Sixty-Five Calibre 401 Carl Brashear is €3,700 and, like the previous editions, is limited to 2,000 pieces. Check out more on the Oris website here. 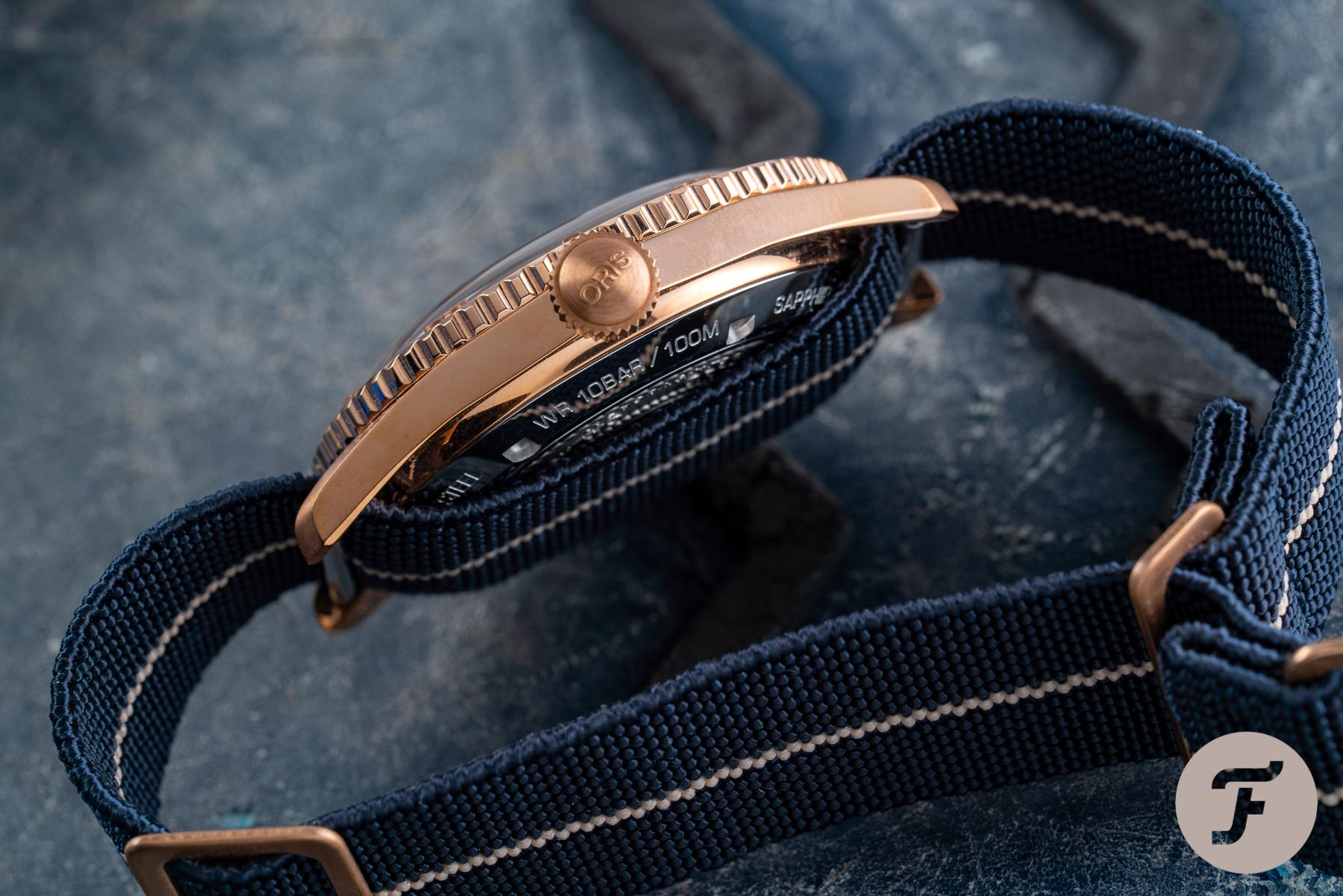 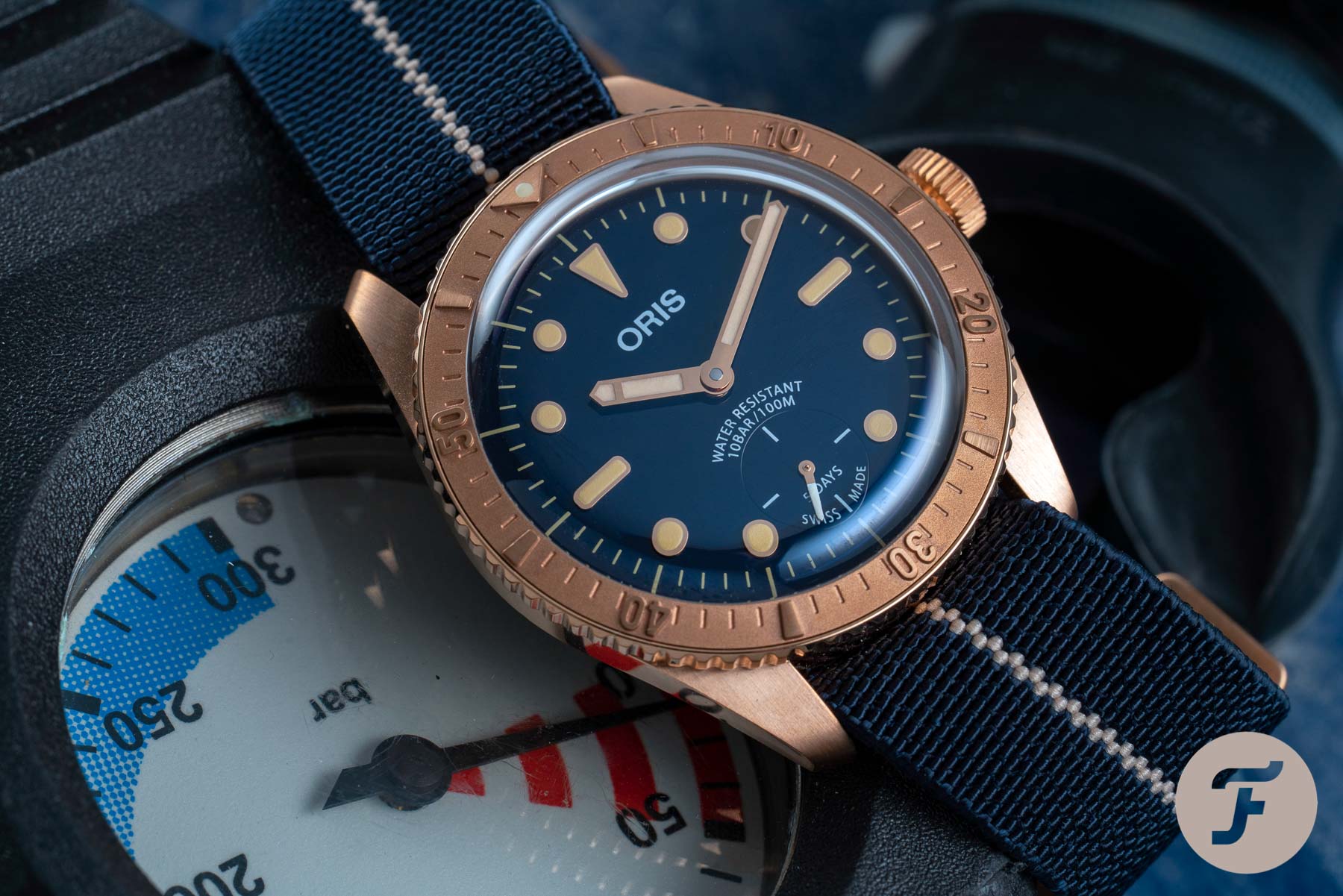 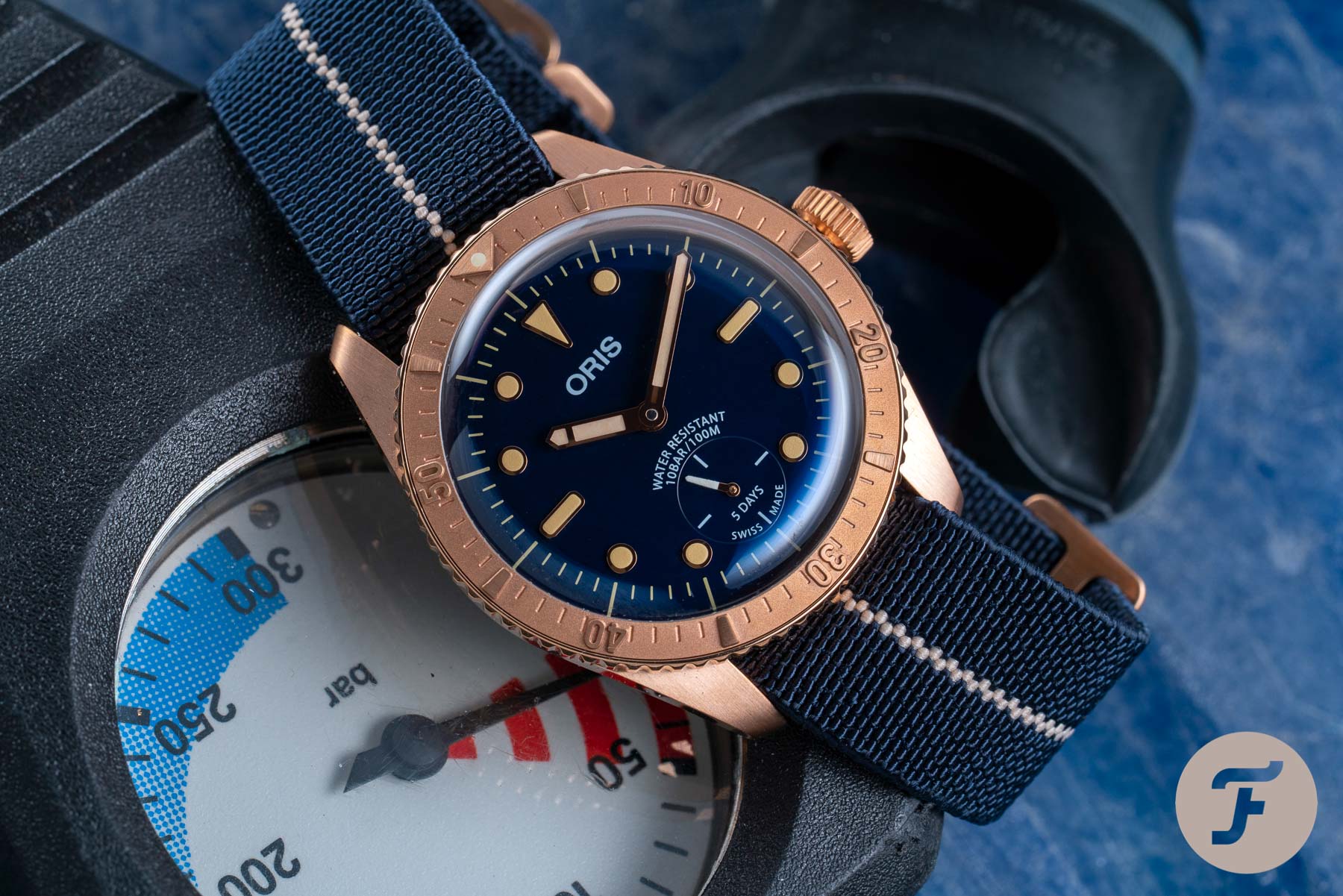 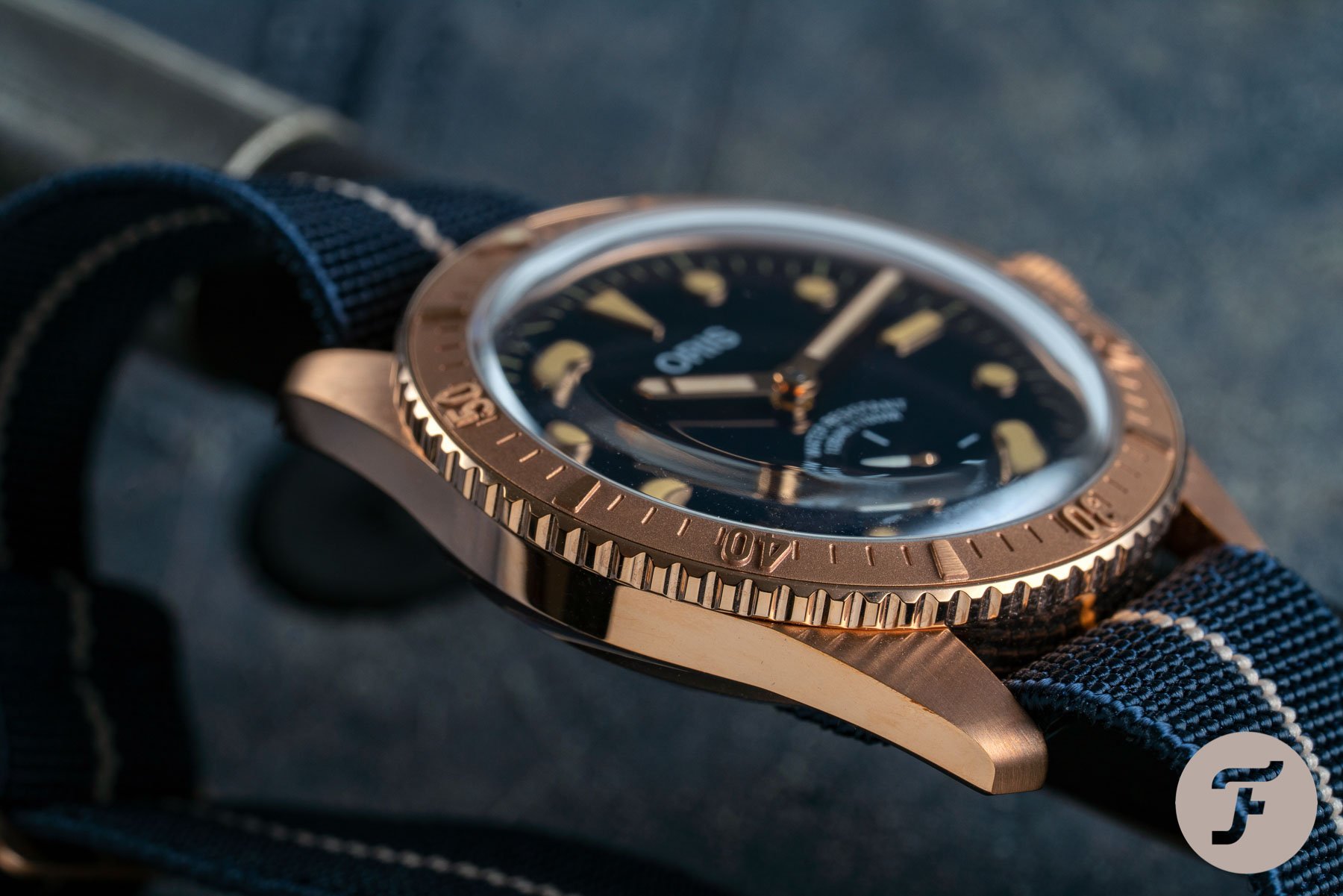 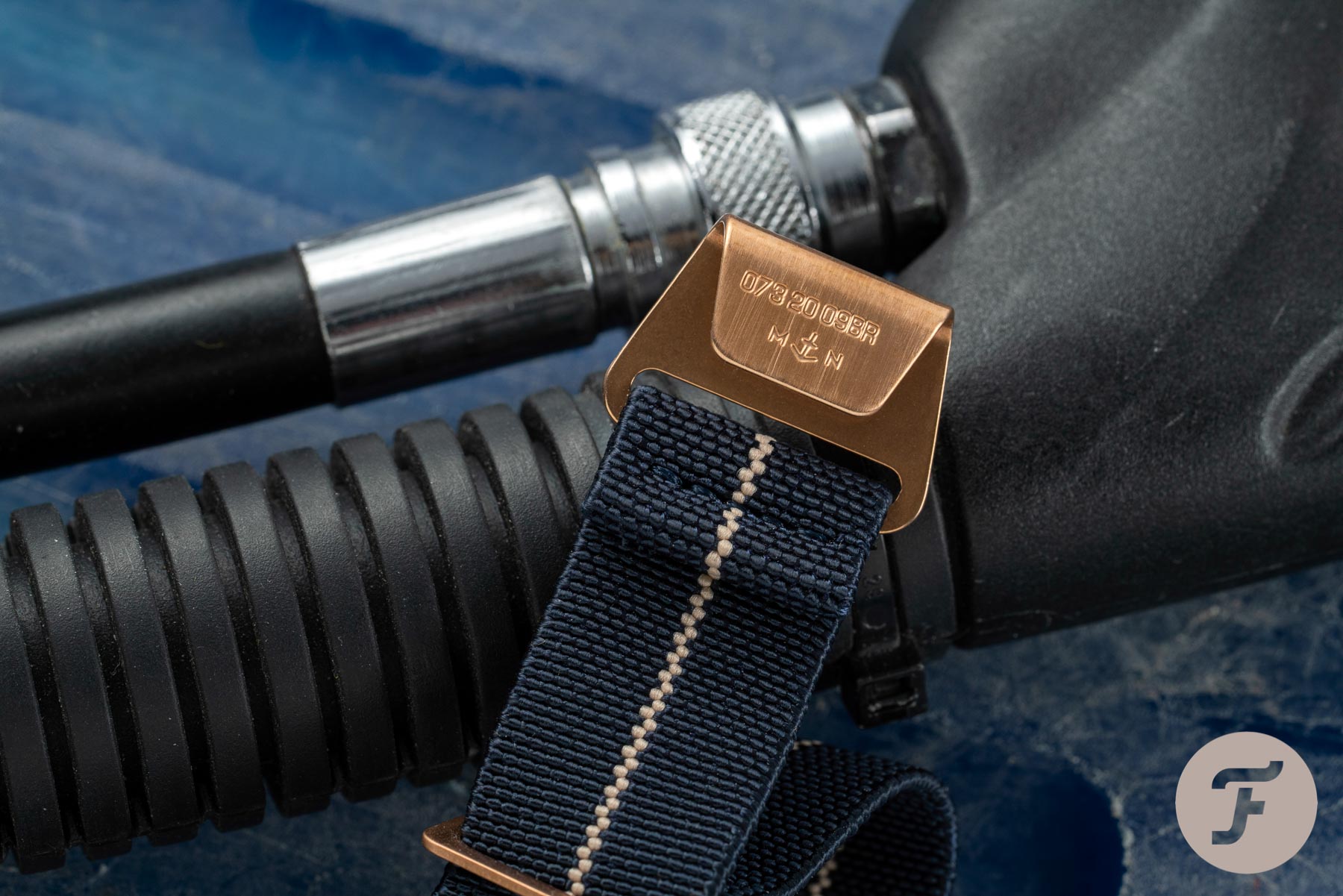 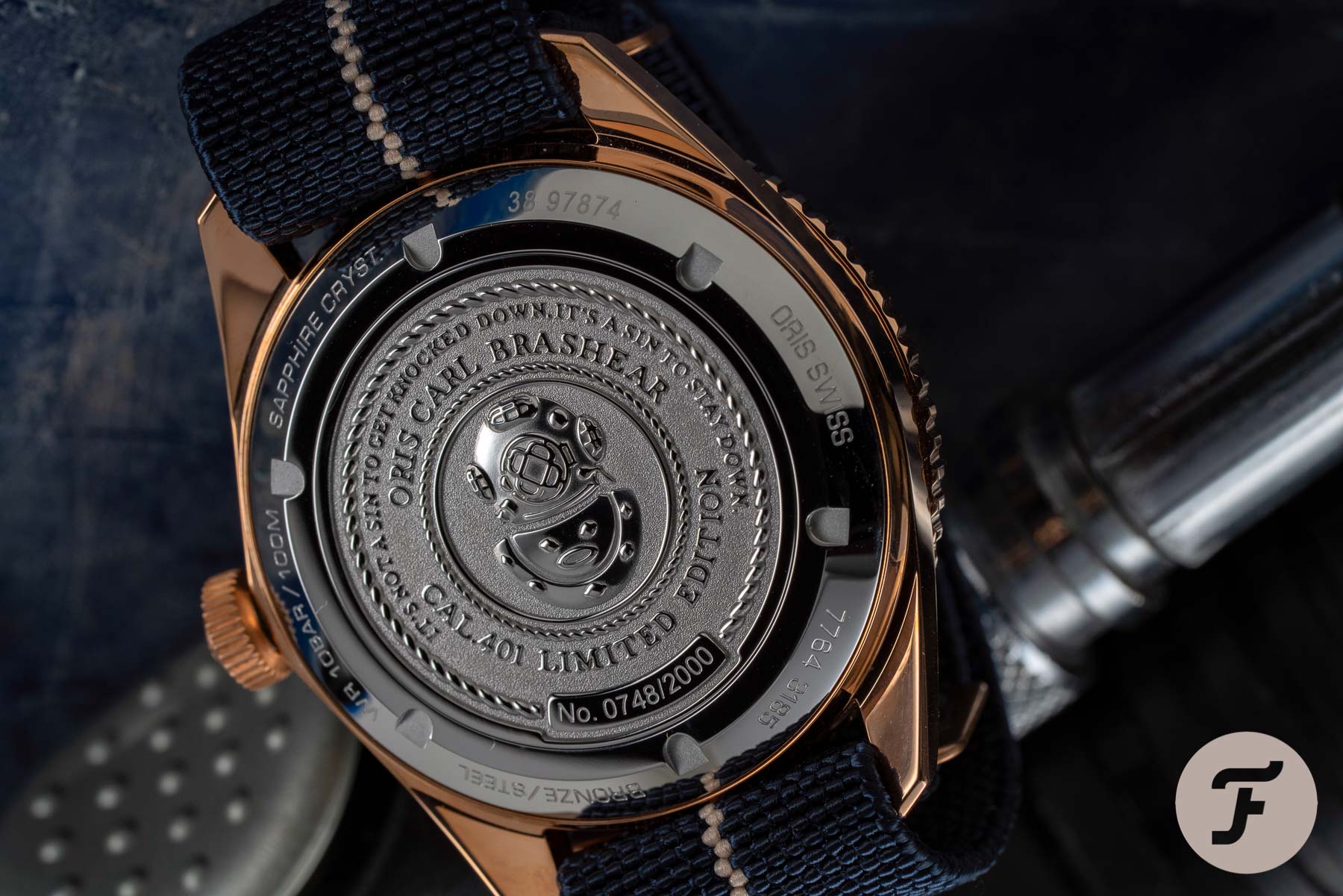 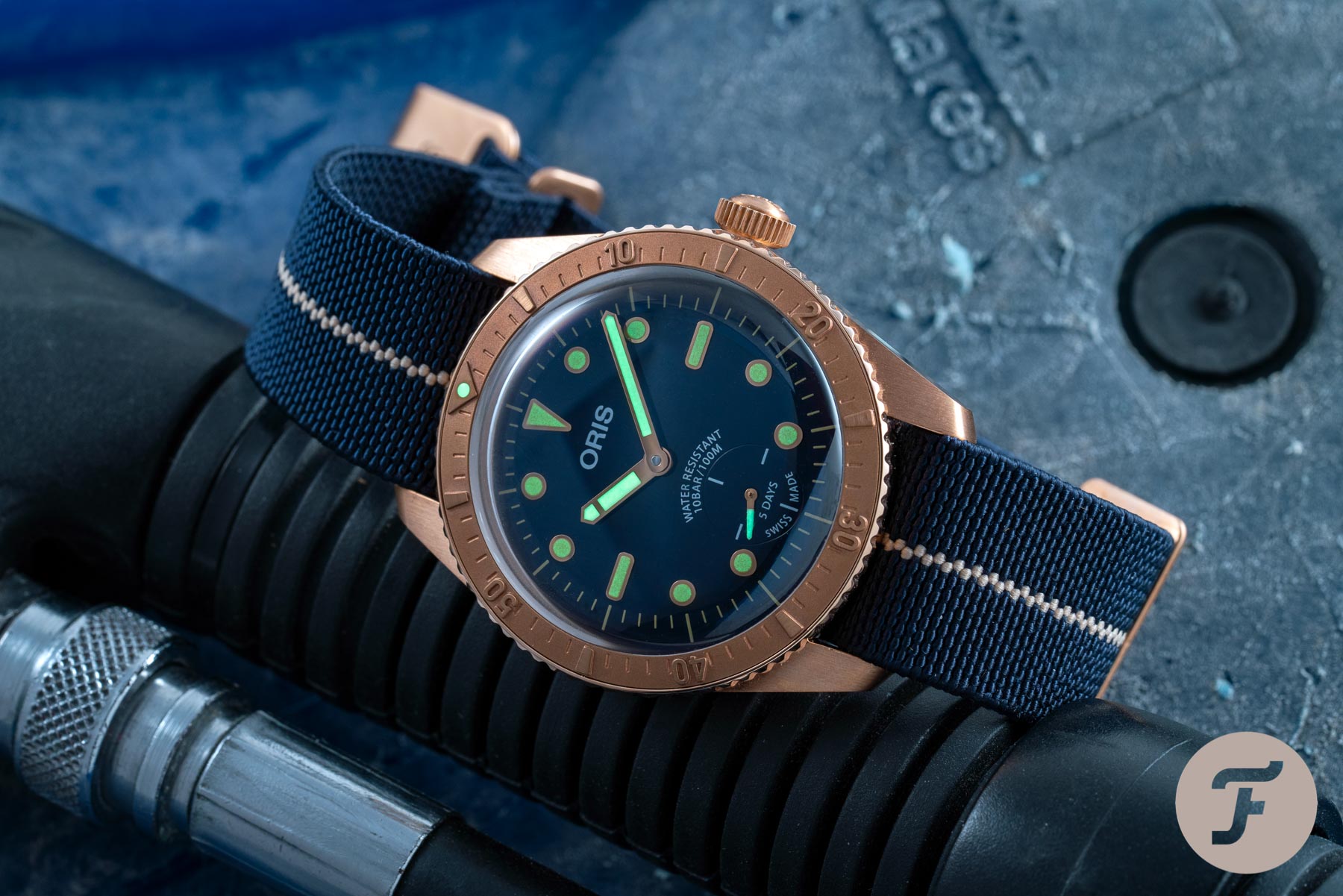 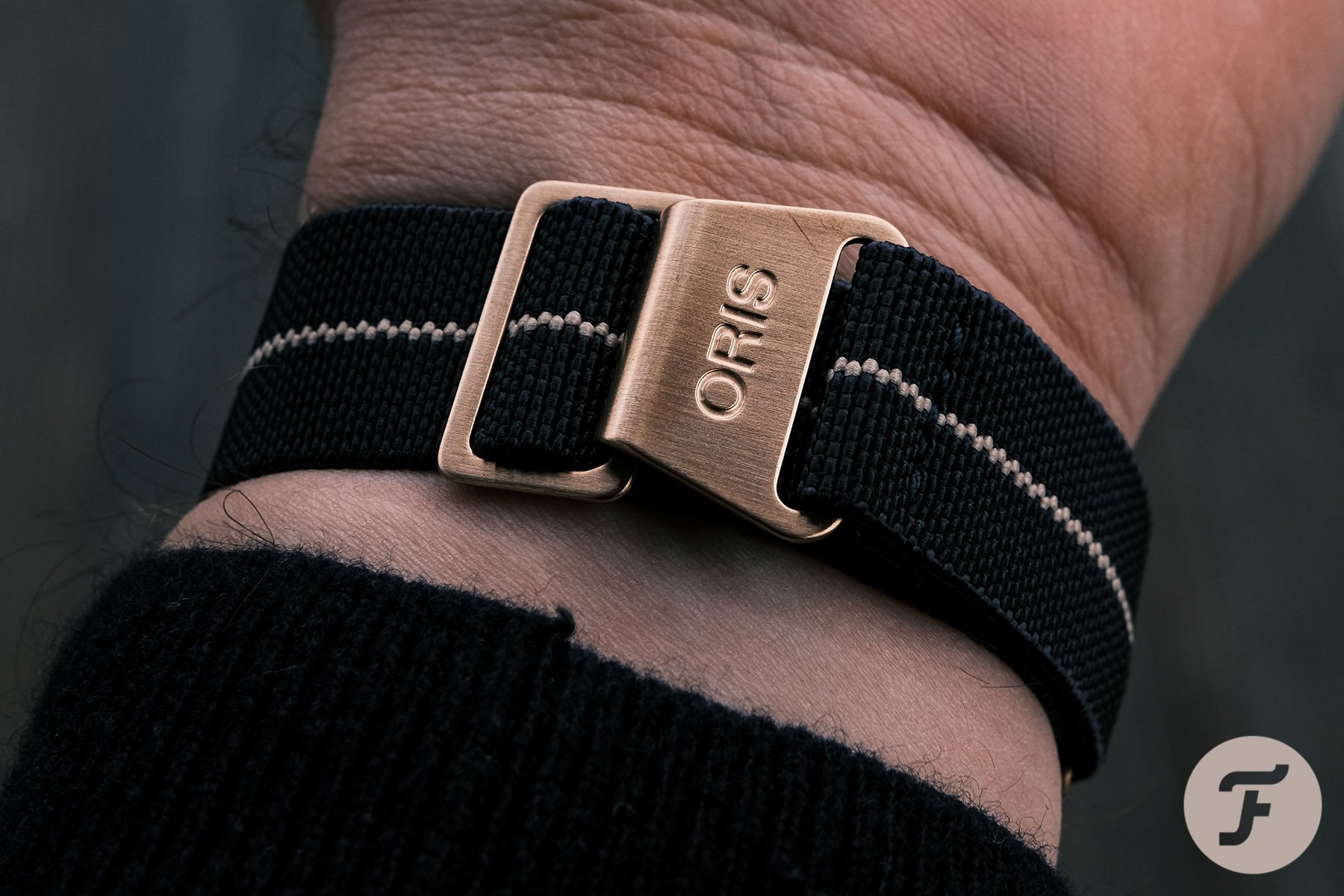 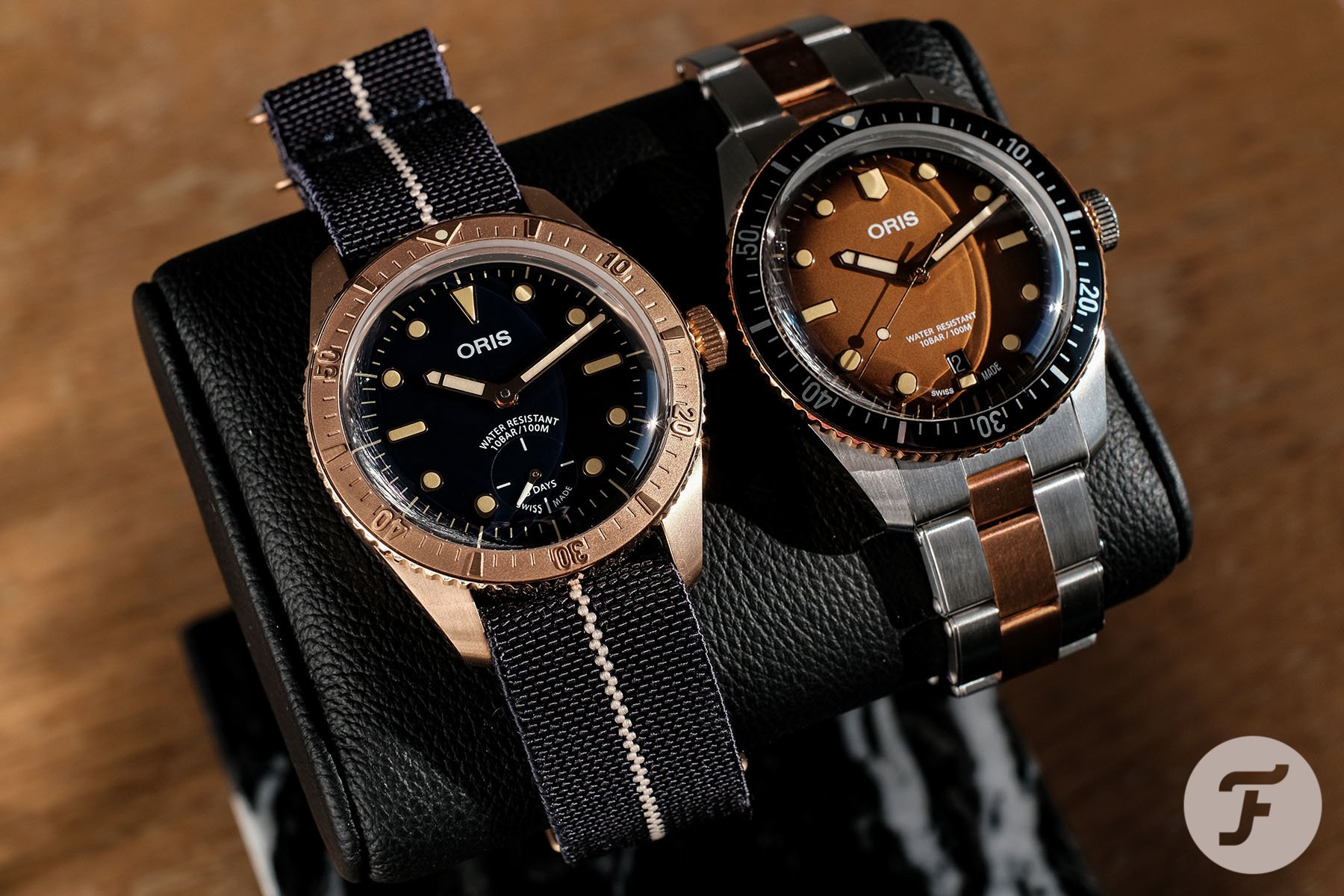 Hot Topics
Are You Still After An Omega × Swatch MoonSwatch?
108 comments
Introducing: The New Seamaster Professional 300M 60 Years Of Bond — With A Special Animated Case Back
107 comments
Introducing: The Oris Divers Sixty-Five Fratello Limited Edition
104 comments
It’s Time To Invest In A Dress Watch — Our Picks From Breguet, Omega, Grand Seiko, And More
74 comments
Rolex Is Going Certified Pre-Owned
62 comments
Popular
(From The Archives) Shut Up & Read The Truth About Cartier Watches
George Cramer
21
Grand Seiko SBGA211 ‘Snowflake’ And Why I Didn’t Buy It
Robert-Jan Broer
22
Oris Classic Date Or Save Up For an Omega De Ville Prestige?
Robert-Jan Broer
17