Hands-On PRIM “Hole In One” Review

He doesn’t get mentioned as much on Fratello as Buzz Aldrin or Ed White. But it is astronaut Alan Barlett Shepard that inspired this new moon-related watch release. Made by Czech manufacturer Prim, let’s take a look at the model Hole In One.

Alan Shepard is quite the man. He was the second person to travel to space in 1961, making him forever the first American in space. Ten years later, Shepard would leave Earth’s atmosphere again to become the fifth man to walk on the moon. And for the sake of this article, he was the first one and only one to play golf on the Moon. That’s right, on the moon!

PRIM “Hole In One” 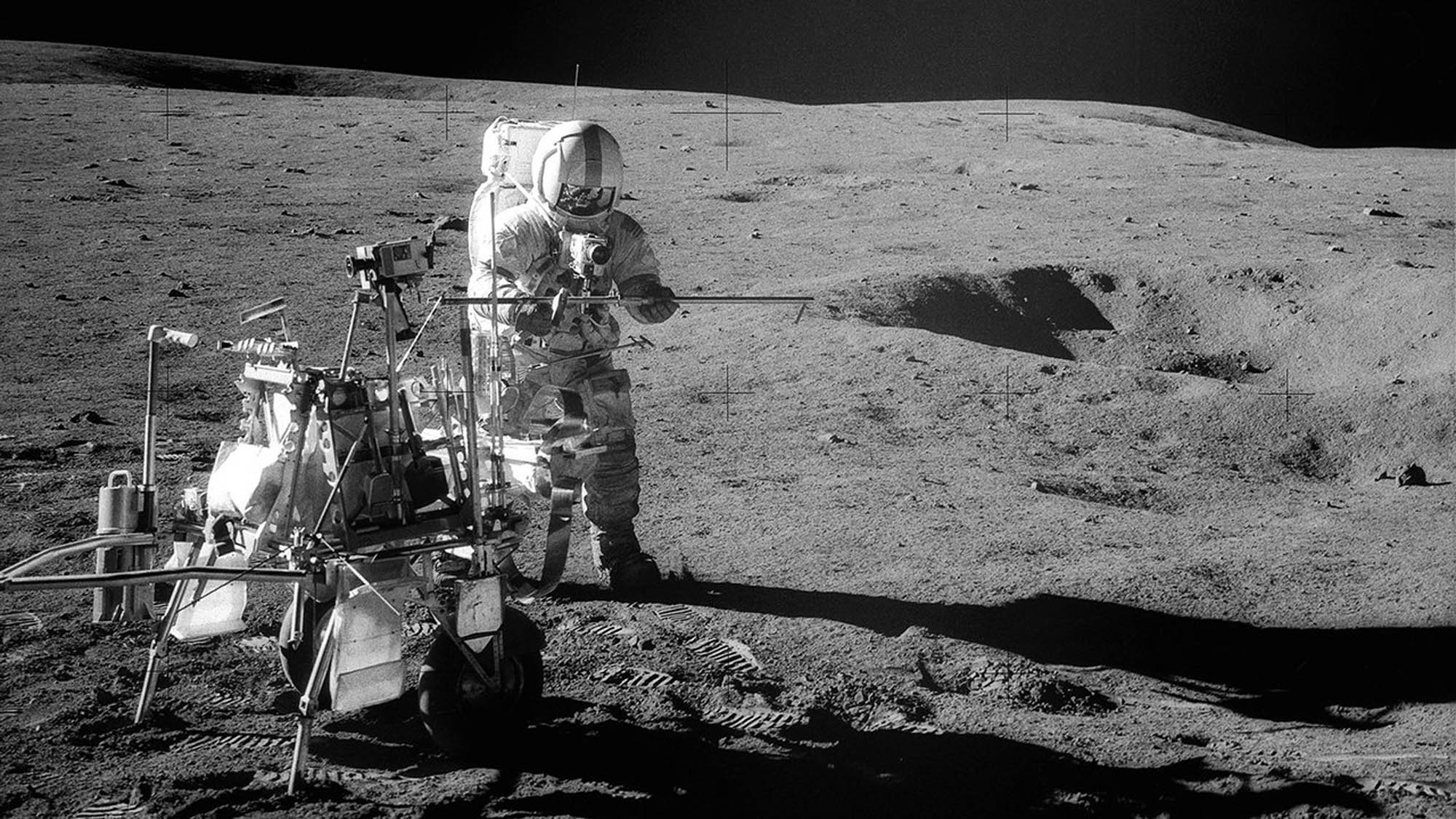 Shepard was initially slated to be one of the crew members on the infamous Apollo 13 mission, but he swapped missions with the Apollo 14 crew to receive more training time for his expedition. In 1971, Shepard commanded the Apollo 14 mission, piloting the Apollo Lunar Modul Antares to the most accurate landing of all the Apollo missions. At the age of 47, Shepard was the oldest person to walk on the moon at the time. And he didn’t stop there. 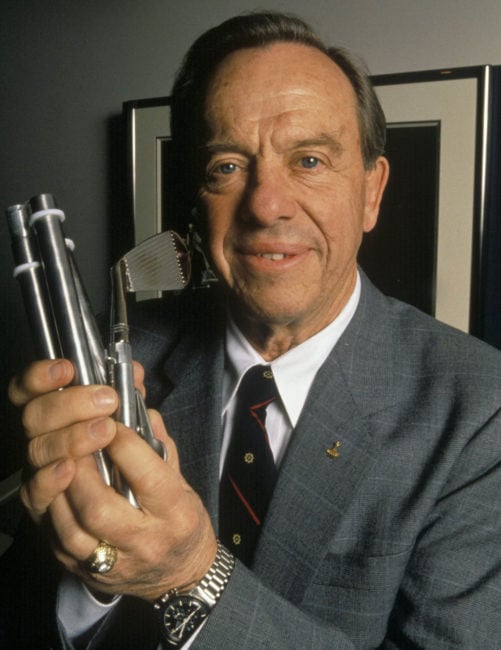 According to the PGA,  Shepard wanted to do something special while on the moon (as if it wasn’t special enough already). We can imagine, though, that the mood at NASA after a series of tragic events was quite somber, so Shepard went solo on his stunt. He contacted a local golf pro in Houston who connected the head of an iron 6 on to the shaft of a piece of rock and soil sample collecting tool. Shepard took two golf balls with him, hidden in a sock, and tucked the clubhead into his spacesuit. After initial exploration of the lunar surface post landing, Shepard proceeded to pull out the club, dropping two balls on the moon and taking a swing. Watch the video below to see the spectacular scene.

Inspiration for the act

Why would Shepard do that? First of all, Alan was a golf enthusiast. The story goes that „Shepard was showing comedian Bob Hope around the NASA center. Hope went into a simulator for the lighter lunar gravity and swung a golf club around as he bounced around.” said Michael Trostel, the curator and historian at the United States Golf Association Museum. 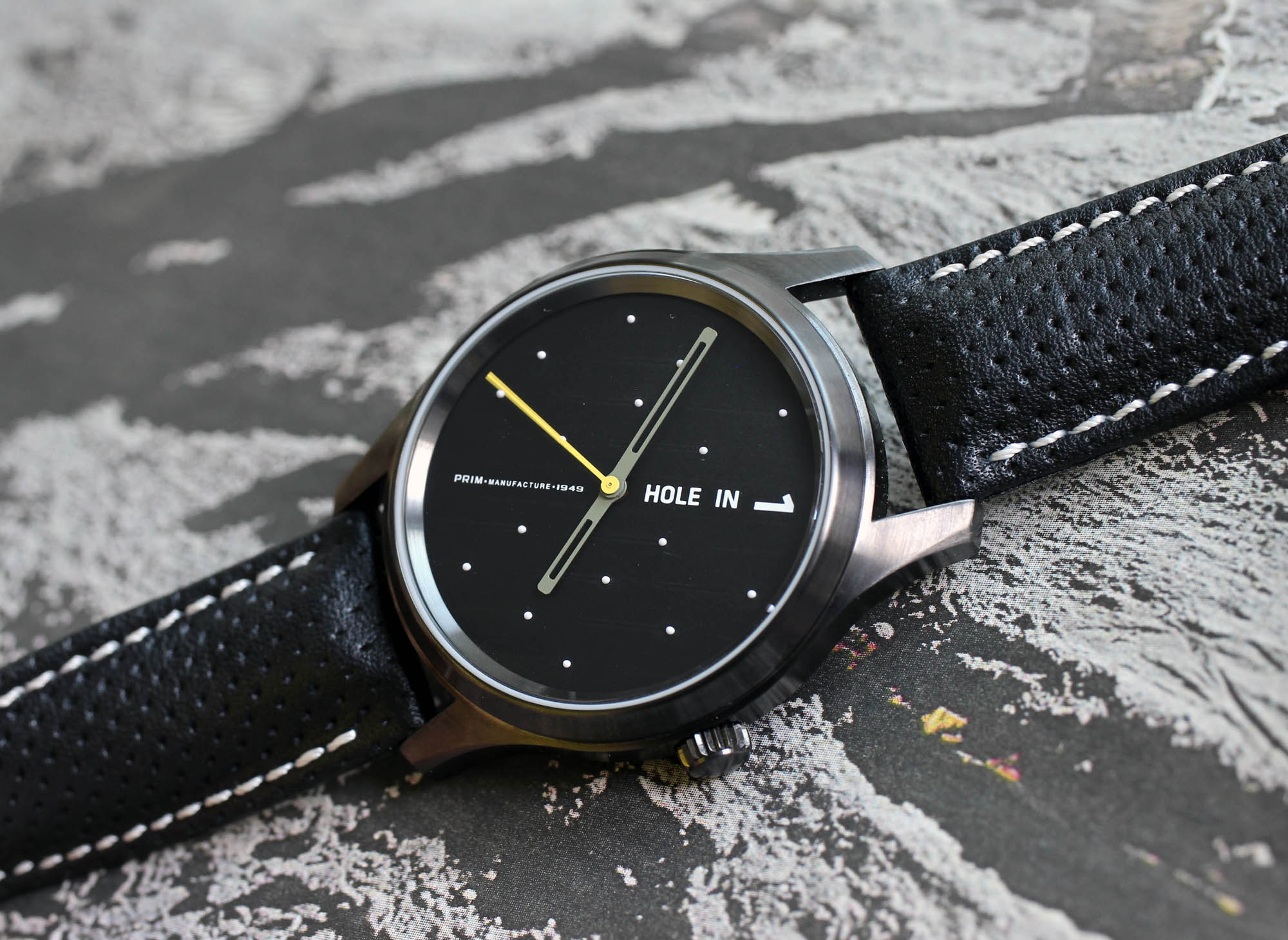 It is truly shocking to realize that this peculiar moon event hasn’t inspired any watch re-interpretations by major watch-brands. For the record, we don’t count attempts like this. In case I had known about this two years ago when it was auctioned, I would have tried to add it to my collection. If you know of any other vintage moon shot watches, let us know. 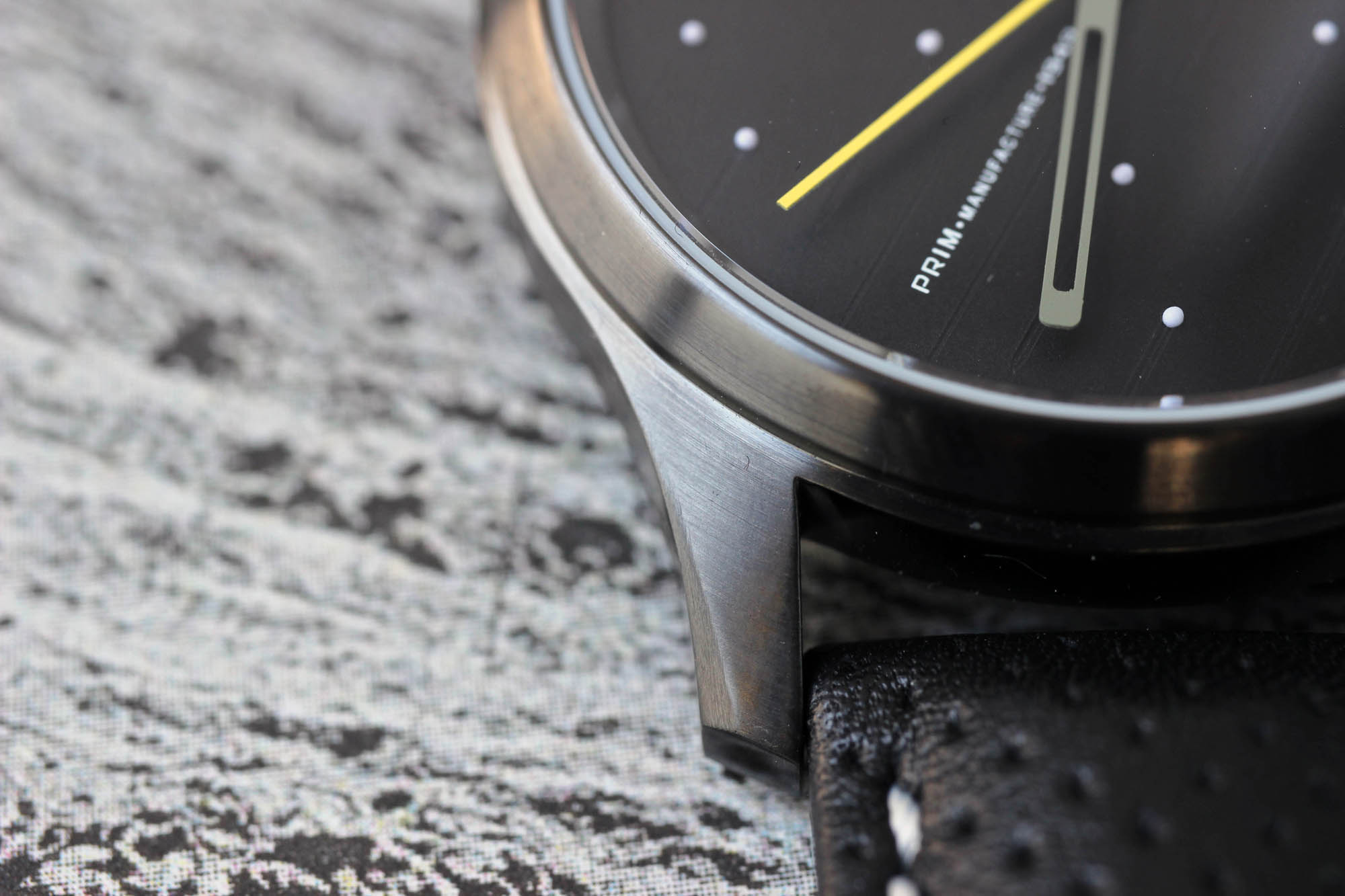 Limited edition Prim Hole In One

The idea for the new PRIM Hole In One release sparked in the mind of golf enthusiast Pavel Suchanek. His 4-day WGM Czech Open Championship attracted 140 professional golfers this year alone. With prize money of around 8.000 euros for the winner, it is a local tournament not to be overlooked. The same can be said about the watch that the winner can now add to his collection. Mr. Suchanek decided to take a different route. In cooperation with a local design studio and the watch manufacturer Prim he created an exceptional watch. 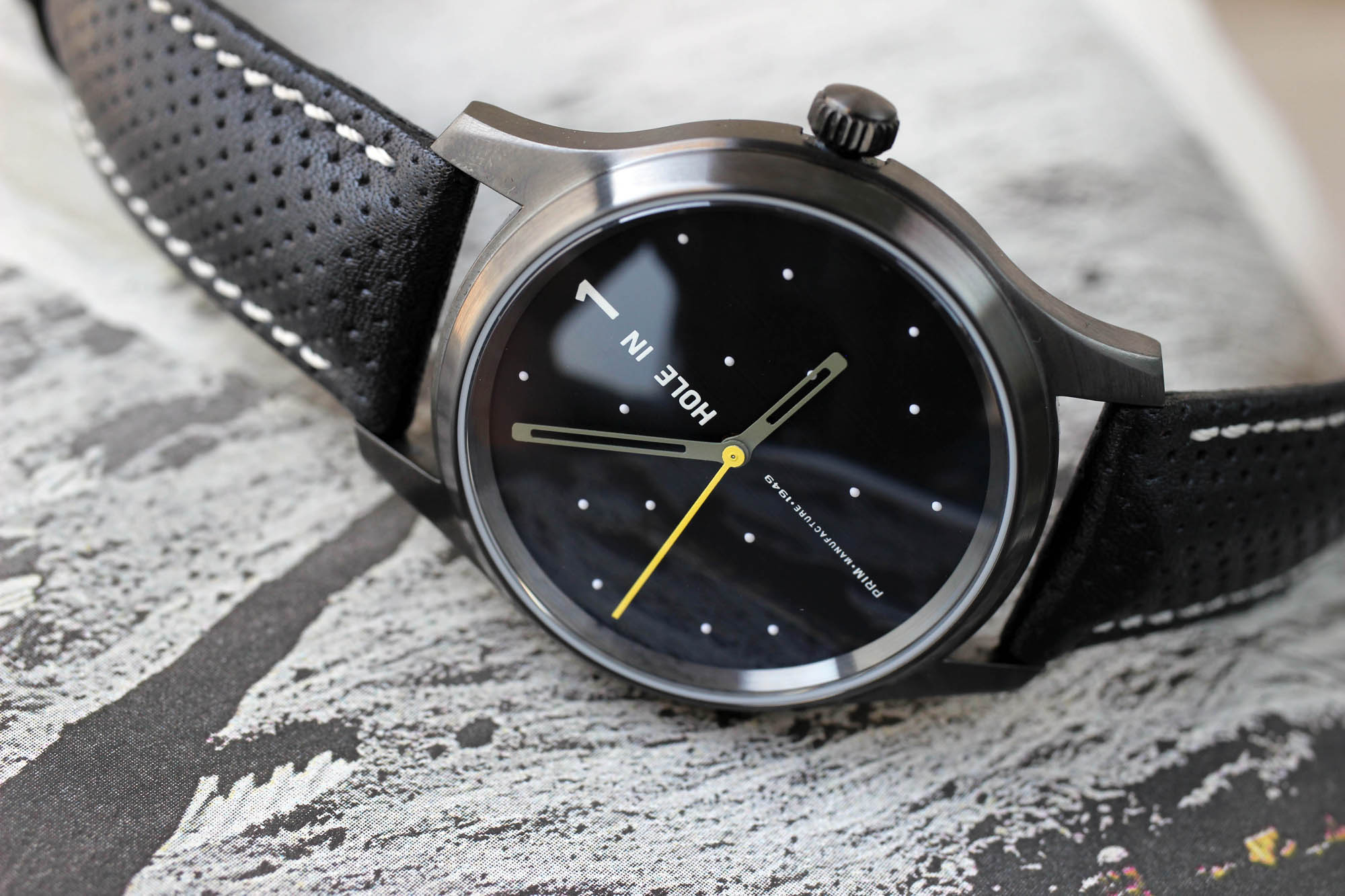 Flying balls on the dial

The dark matte dial is sprinkled with many tiny balls. Each of the balls is put in its place by hand with luminous color. Looking at the glowing balls in the night time one feels like they’re watching the night sky. Okay, a tiny piece of the night sky. If you look more closely and from an angle, you will see relief flying trails the balls left behind. So while at night the arrangement of balls might seem chaotic or random, the special angle reveals they are all flying in one direction. What direction it is? Try to guess. 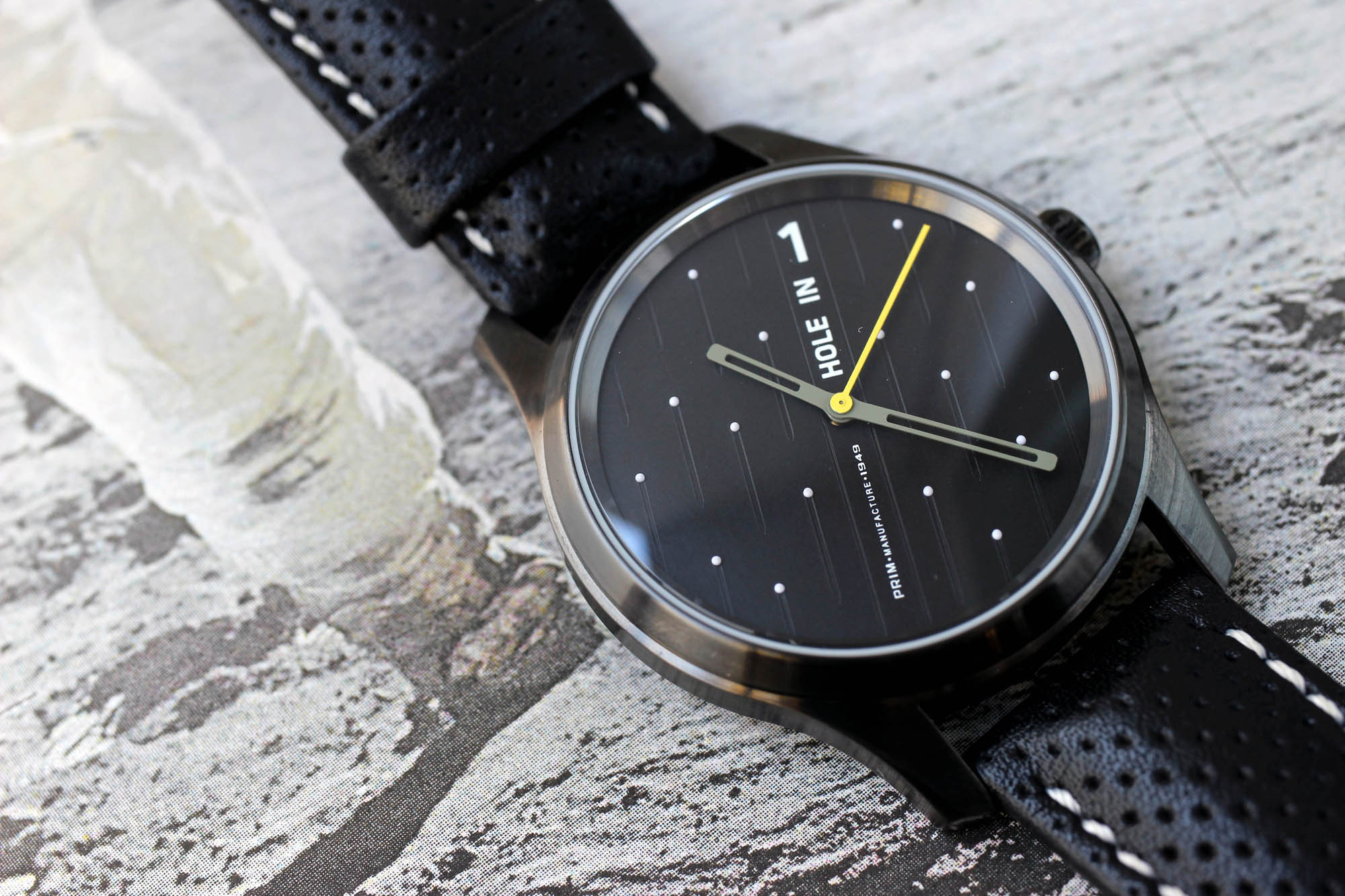 If you look more closely and from an angle, you will see relief flying trails the balls left behind.

There is just one big number printed on the dial. Not 12, nor 6, not 3, nor 9. It is number one. A perfectly awkward position for the only numeral set on the dial. I don’t want to be the party pooper here, but the additional HOLE IN text completely kills the genuine idea, in my humble opinion. I dare to say that without the unnecessary six letters, the charm of this watch would quadruple. It would be much cleaner, simpler, more mysterious, and smarter too. Full stop. 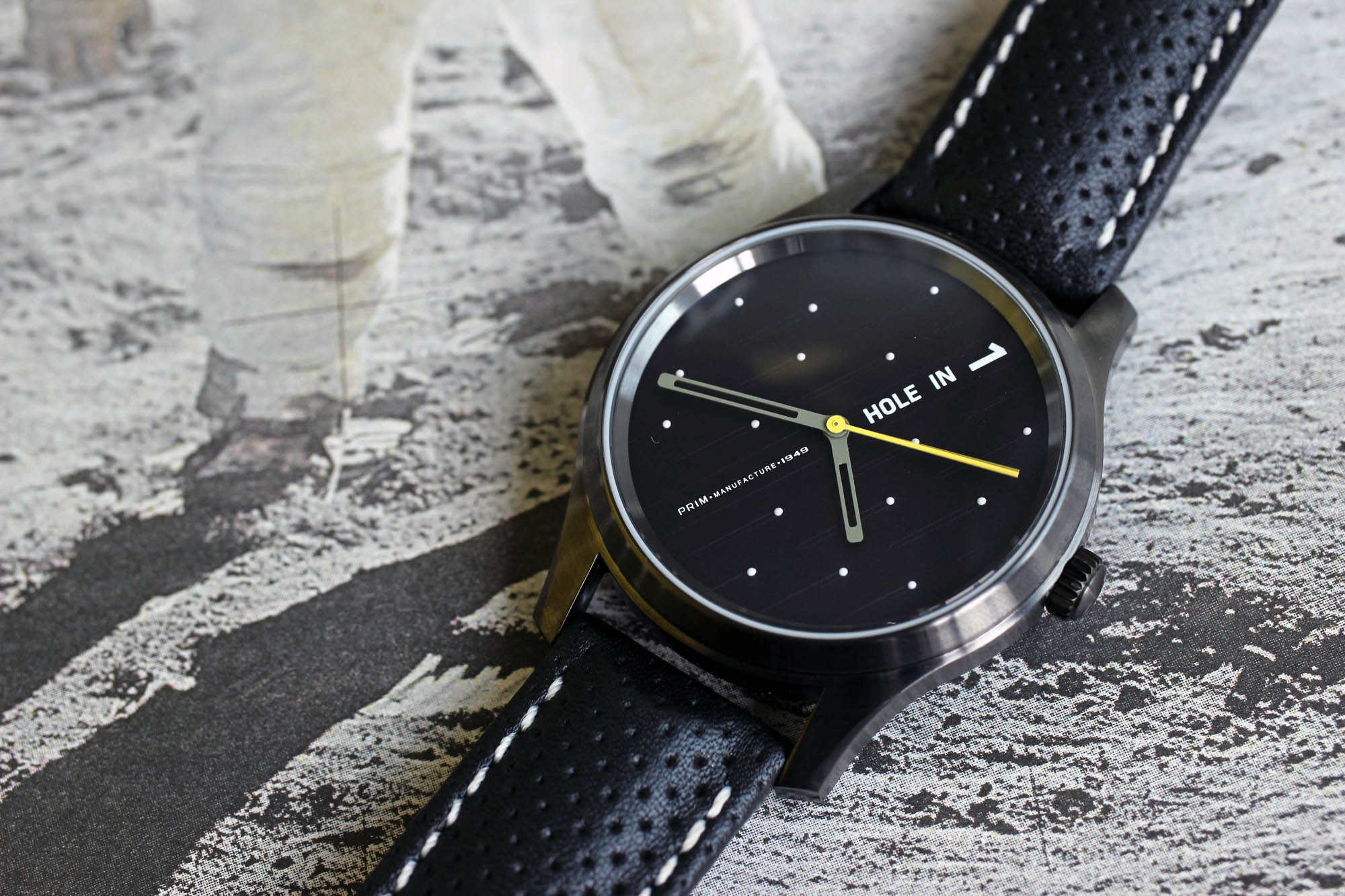 Would the HOLE IN text not be on the dial, the tiny inscription on the other side would get the spotlight it deserves. It says PRIM Manufacturer, the only Czech watch producer with seven decades of heritage and its in-house calibers. The automatic caliber 98.01 ticking inside the Prim Hole In One has a rotor decorated with a lion, one of the Czech state symbols, signifying power and sovereignty. You can enjoy it swinging over big blue screws through the transparent case back with very decent markings. 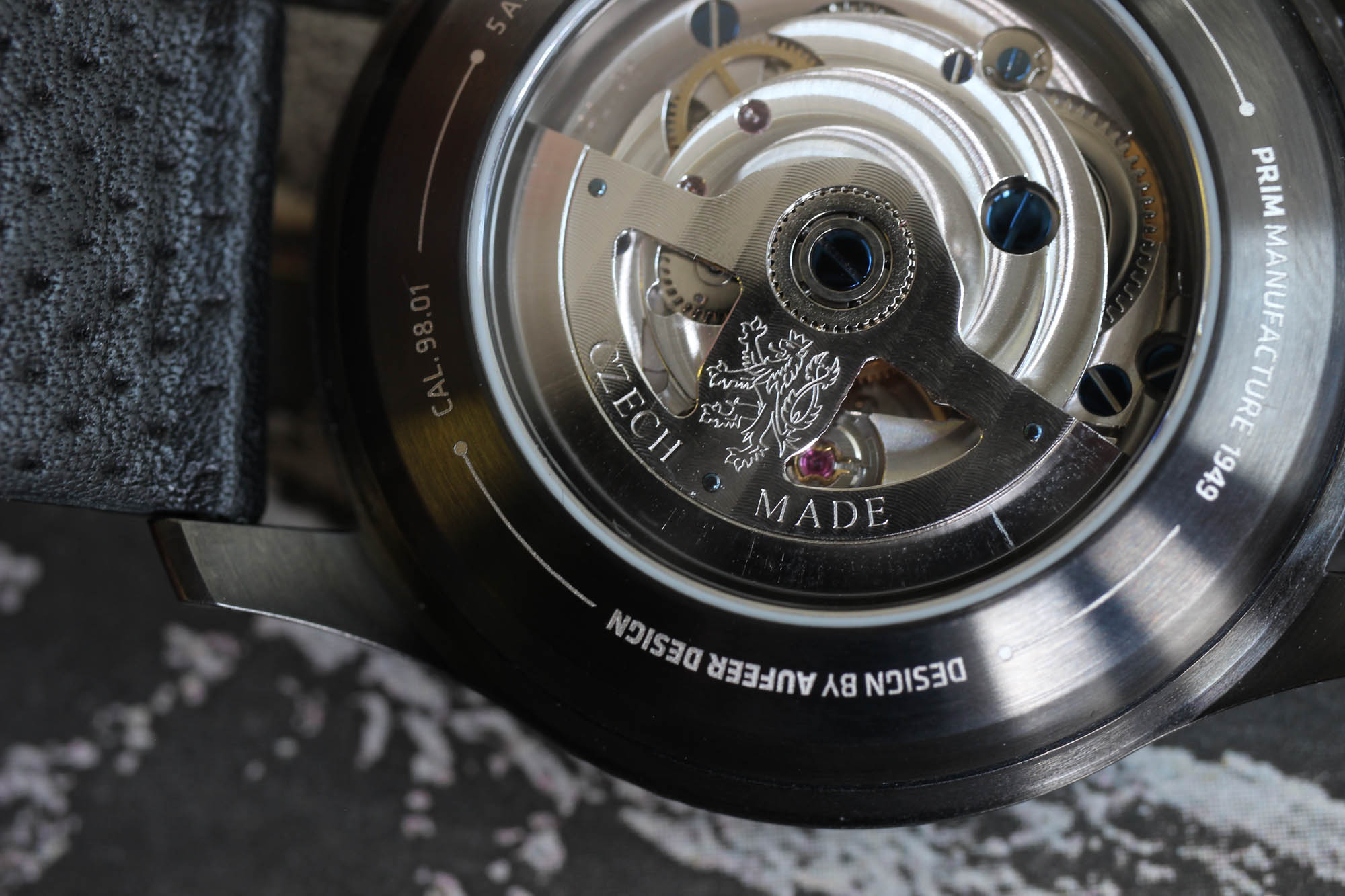 The watch case seems smaller than it actually is. It has 39,7mm diameter and wears comfortably. The brushed stainless steel 316 with a DLC coating comes in space grey tones similar to Apple’s Macbook. It evokes the moon topic and looks coldly fresh. Even the crown has the same finish, and with the simple case shape and almost flat sapphire glass, all the attention is rightfully drawn to the dial. 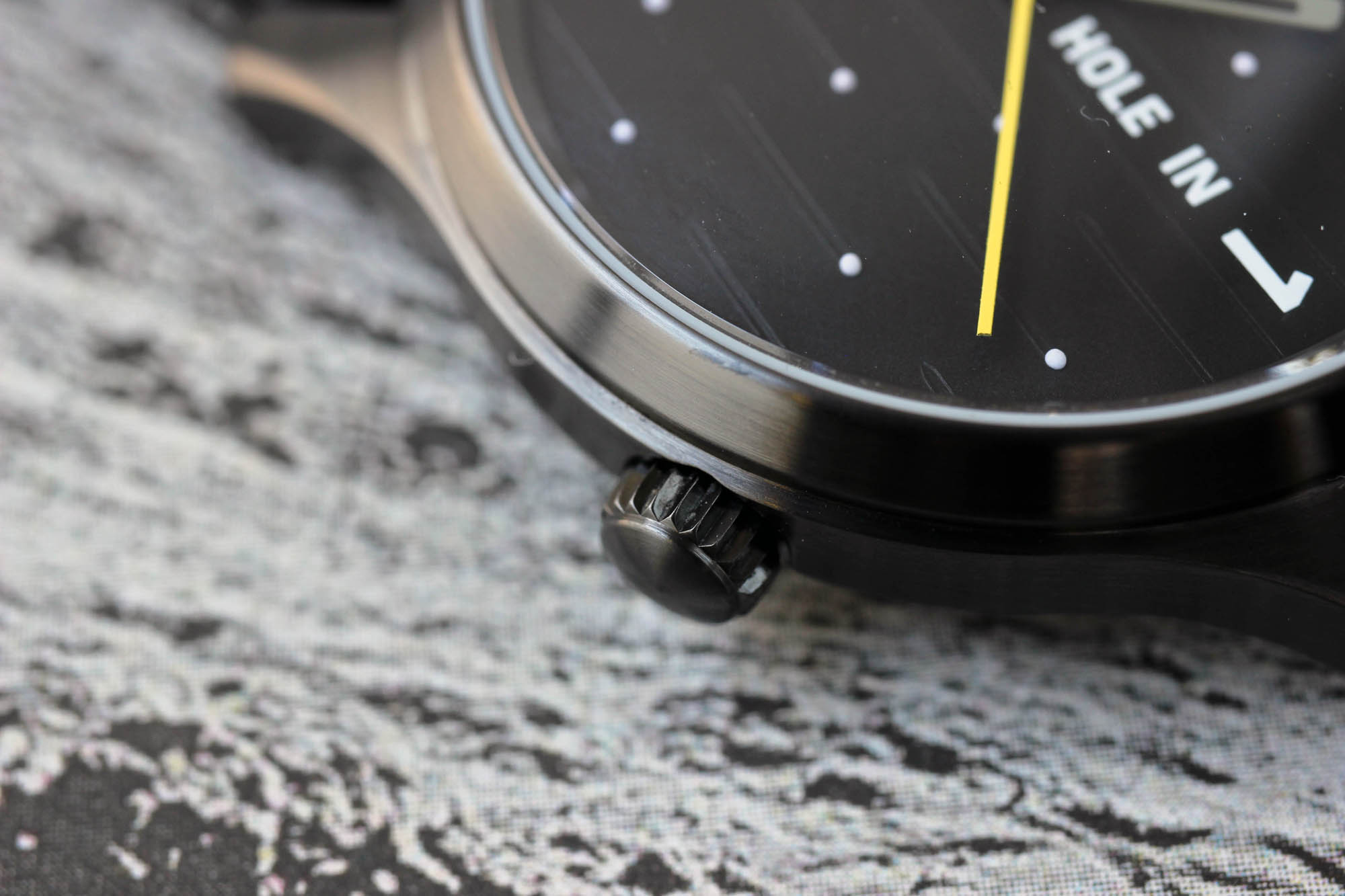 The first pieces out of the limited series of 100 pieces are already produced. More are being produced and will be released gradually before Christmas. The Prim Hole In One is still available according to the creator. The price tag showing 3830 Euro is quite ambitious, but Czech Prim Manufacture is not complaining about the sales. If you want to, you can see and try the watch upon your next trip to Prague, where Prim recently opened their brand new boutique. The Prim Hole In One can be ordered directly by getting in touch with them via email. 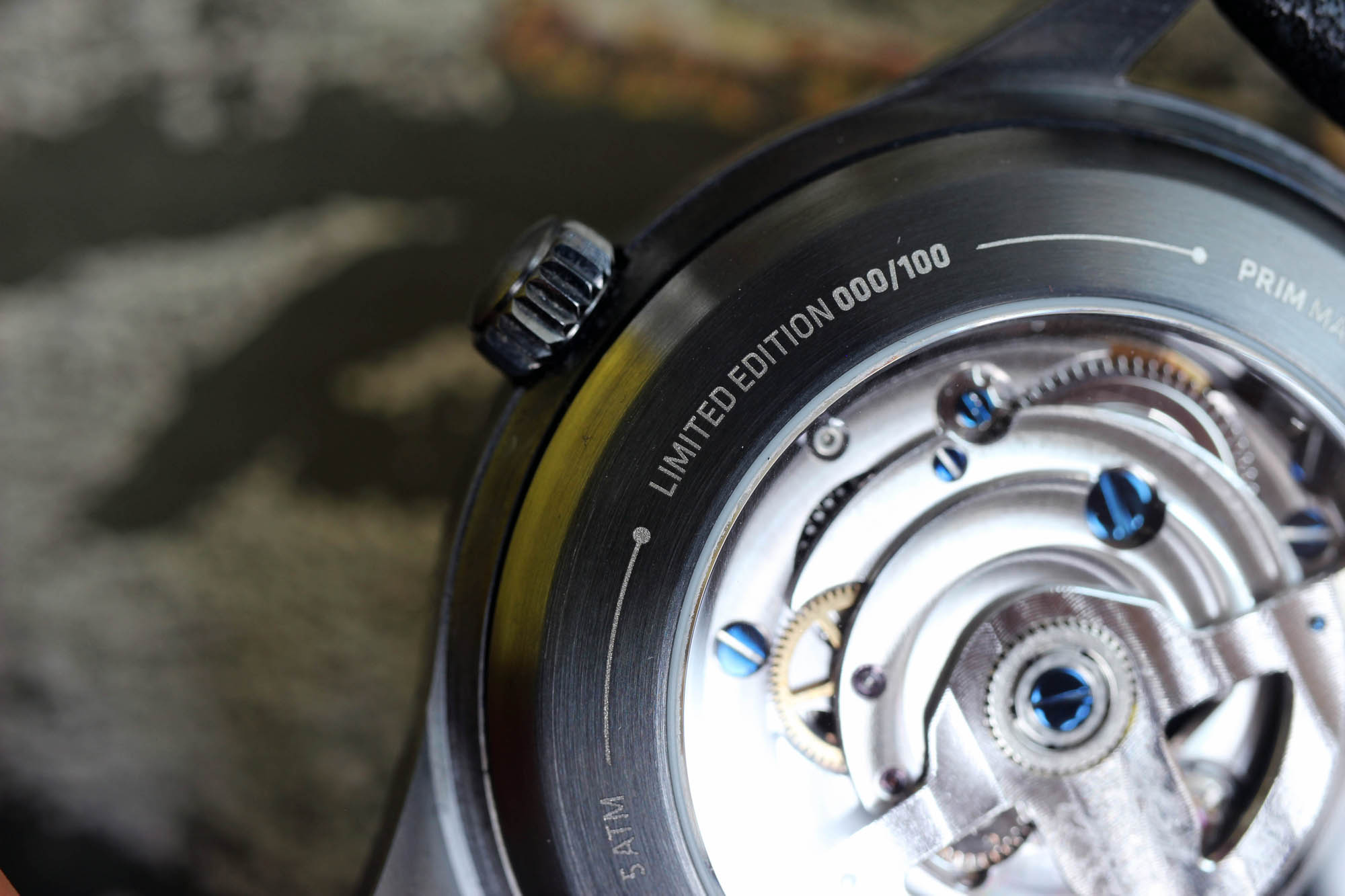 The signed buckle with finishing that matches the case looks good. I also like the shape of the crown. Nothing unorthodox, rather simple, but underlines the consistency of the design. I would appreciate more lume, not only for the golf balls. The skeleton hands look modern but do not expect to read the time in the dark. I am a vocal enemy of dials without indexes, but here the ball structure helps a bit. The yellow central second hand gives the watch some extra juice and fits in with the moon theme. 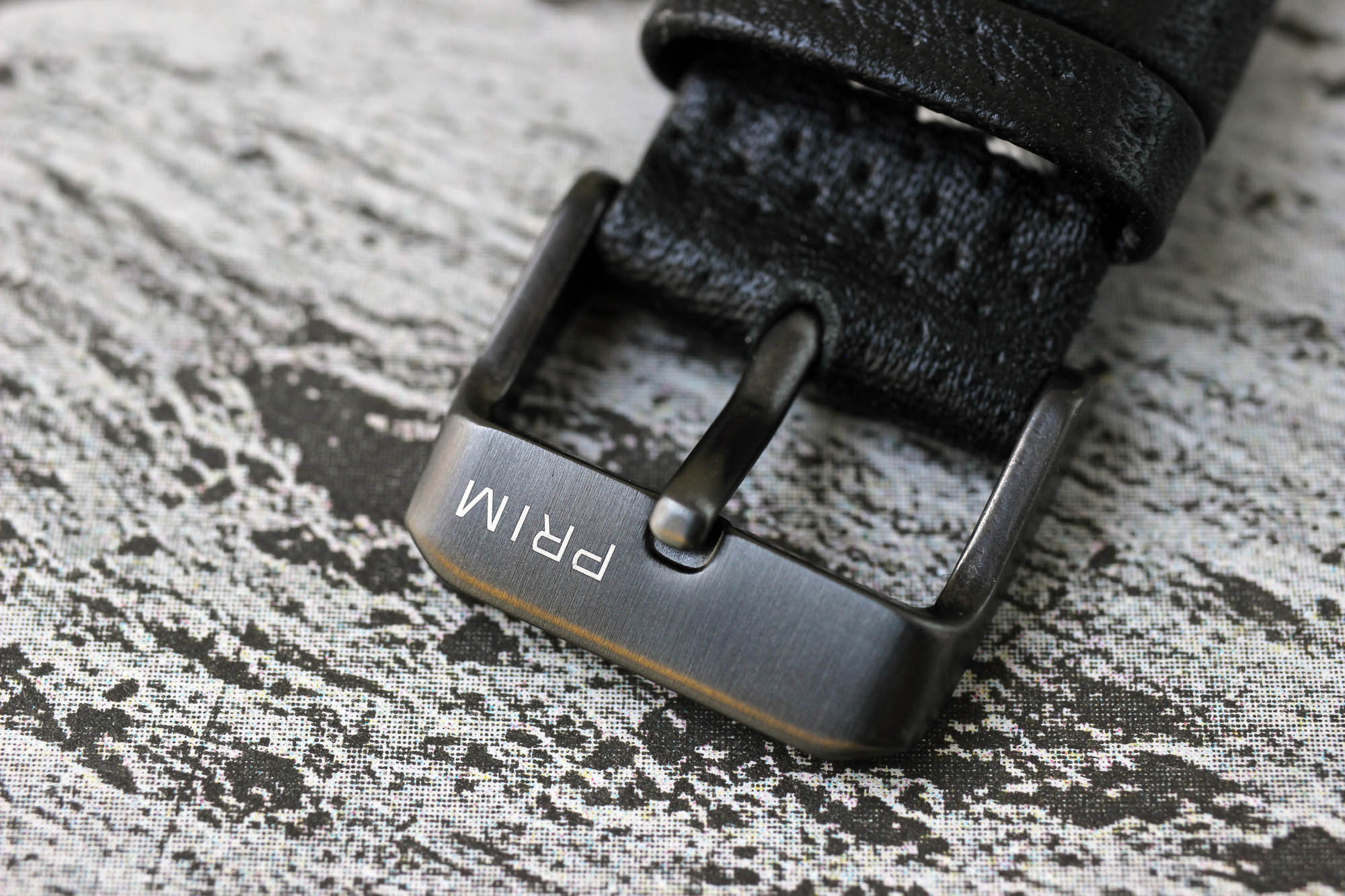 Time for a museum?

Shepard donated the original club he took on his spacey odyssey to the USGA’s museum in New Jersey. He could do so, as the club was his personal property. If you happen to be in the Smithsonian’s National Air and Space Museum, there is a replica of Shepard’s club there too. To conclude on museum tips, NASA issued an Omega Speedmaster to Shepard for use during the Apollo 14 mission, and it also is resting in the Museum since 1977. 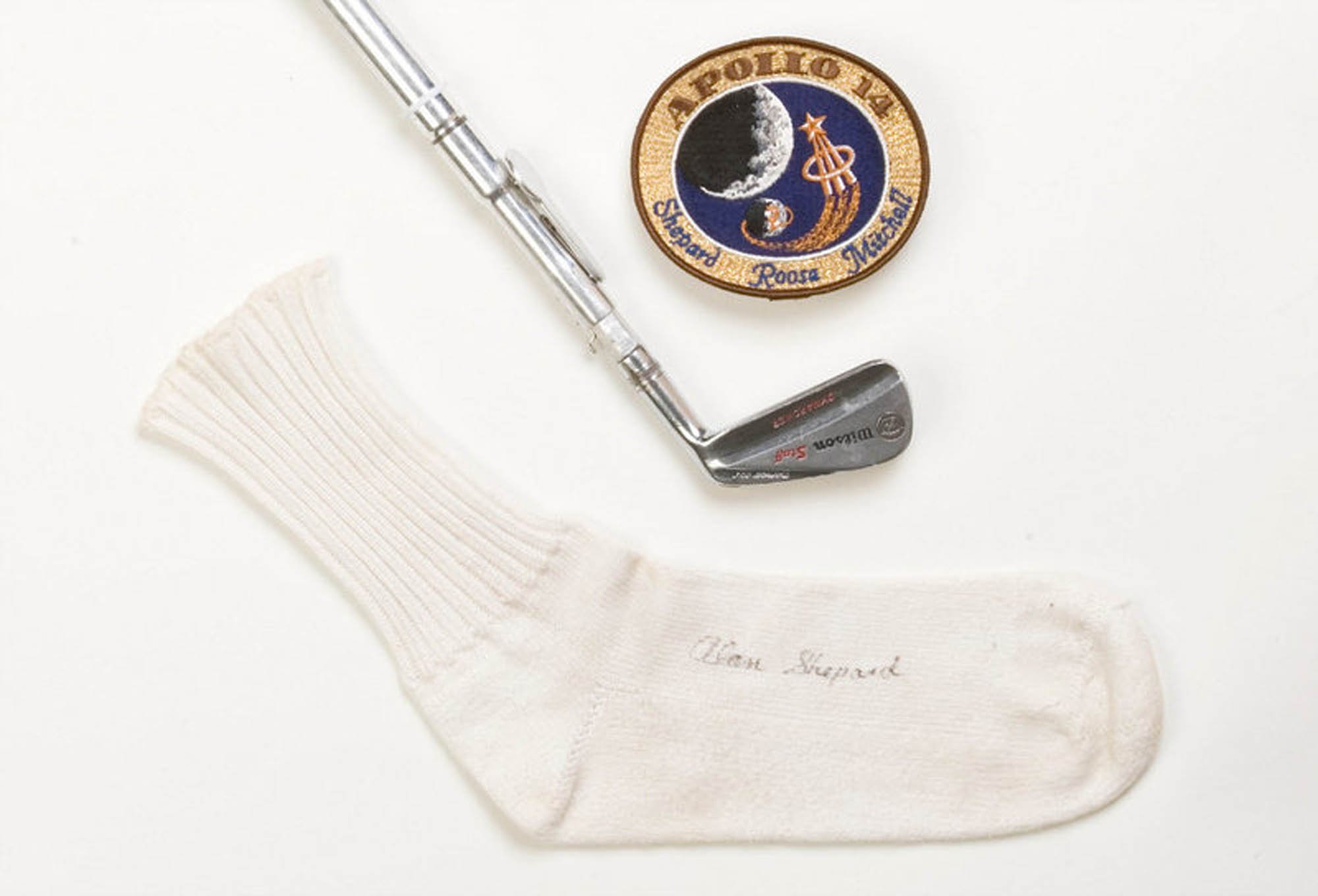 The Moon Club that was carried by Alan Shepard on board the Apollo 14 mission to the moon, (alongside the sock he used to sneak the clubhead onboard). Copyright USGA/John Mummert.

The watch release is entirely off any anniversary date for the moon shot story, which defeats the concept purpose a little. The only link is the fact that a golf enthusiast created it. Overall, a big plus goes out for the dial idea, despite my thoughts on the text. Hats off for the determination and final result. Mr. Suchanek devoted half a year to the watch development, and the final output is a quality built, potentially collectible piece with an in-house movement and likable story. If there are golf lovers with a sweet spot for limited editions, I believe the watch will find a hundred swinging wrists quite quickly.

Hot Topics
Laventure Automobile Chronograph With A Proprietary Movement — Marking A Huge Leap Forward For One Of The Industry’s Most Promising Brands
155 comments
Fratello Exclusive: An Inside Look At The MoonSwatch Production Facilities
75 comments
We Talk To Swatch Group CEO Nick Hayek About The MoonSwatch
53 comments
Selling Your Watch To A Dealer Or Trading It In — Tips From A Former Watch Dealer
49 comments
Summer Splash — Round 2 : Jorg’s Tudor Pelagos FXD Vs. Lex’s Hublot Big Bang Integral Ceramic Sky Blue
47 comments
Popular
Grand Seiko SBGA211 ‘Snowflake’ And Why I Didn’t Buy It
Robert-Jan Broer
22
An Overview: The Tissot Chemin des Tourelles Watches
Fratello
Watch Brand Ambassadors – Does It Work?
Robert-Jan Broer
7