Meet the Raketa “Avant-Garde” watch. Heavily inspired by 20th-century Russian artists like Malevich and Kandinsky who had a new vision of art, which was characterized by colorful abstract shapes. This new 40.5mm Russian mechanical watch was delivered to our office for a hands-on review, and it caused quite a stir in the process…

The fun began when the package arrived. The Raketa box is colorful, decorated with a lot of abstract shapes on its cover. When I pointed my iPhone with Google Translate app at the text on the box, it threw-out “Watch Factory” and “Russia”. The brand name is readable without using that app. Some of the other words are apparently too difficult for this app to translate into English, so perhaps there is a secret message written on the box for the lucky millions that speak Russian without needing to rely upon an app. 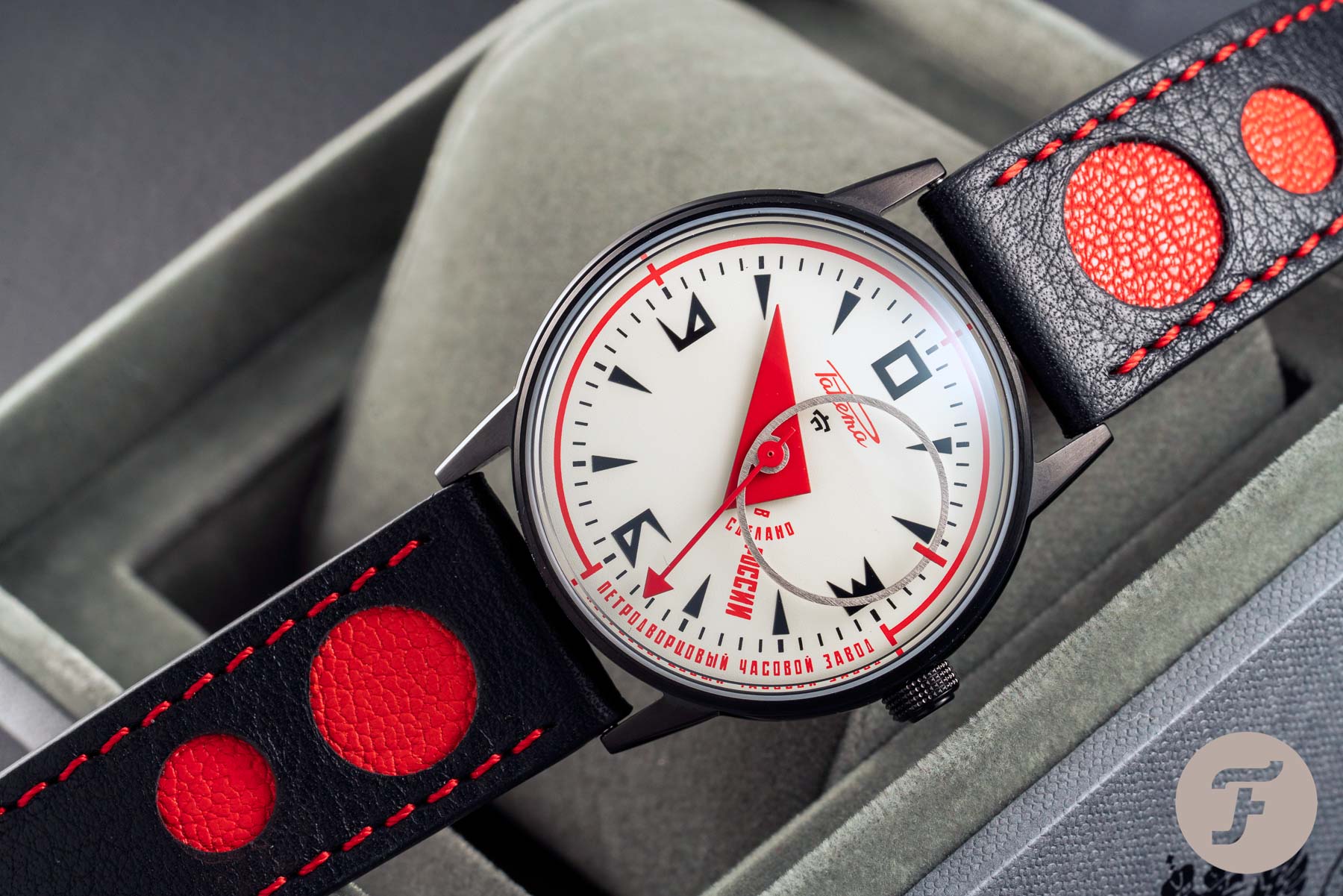 This black watch, with an off-white — almost eggshell-colored — dial with red and black elements, is not for everyone. Nor does it need to be, with only 300 pieces worldwide. I look at the dial and it forces me to think, “what am I looking at here?” The red seconds hand, with an arrow tip, is moving, so that is clear enough. Then we have a large silver circle with a red marker and a big red-filled triangle as hands. The red triangle must be the hour hand, I said to myself. Logically, that would leave the large silver circle as the minute hand. I pulled out the black crown and gave it a turn. The hands started to rotate as expected, proving my assumption correct. The Russian text on the outer cardboard box can also be found on the dial, in red. 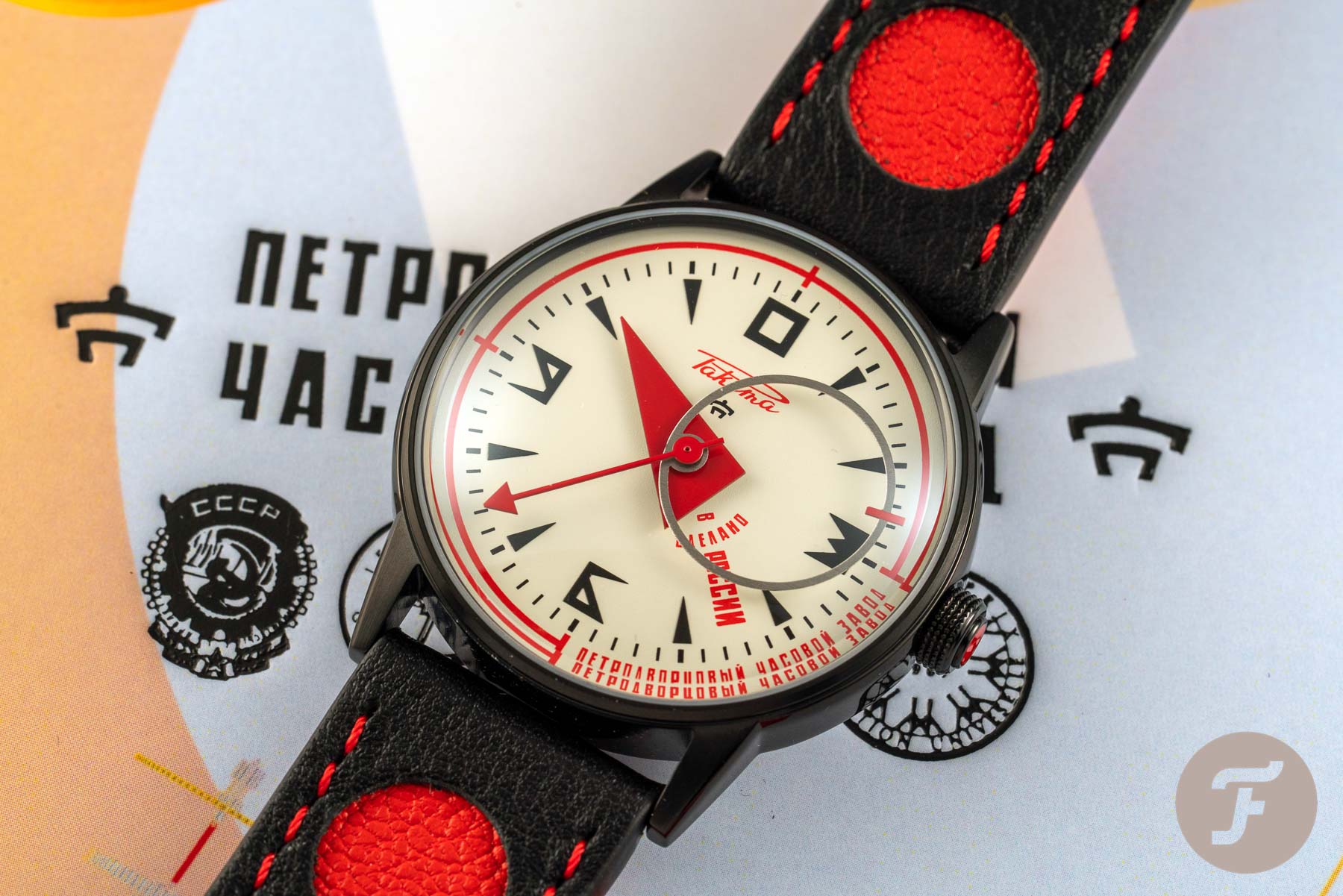 The art is in the motion

After strapping on the Raketa “Avant-Garde”, and wearing it for a few hours, I noticed how the view of the dial is constantly changing. That’s of course always the case with a watch, but due to the large objects that move around on the dial, it becomes immediately apparent. The printing on the dial is pretty interesting as well. It features numerals that are out of the ordinary for sure, and at 12 o’clock there’s a 0. The use of the 0 originates from the 1970s. According to Raketa, Gorbachev was asked by an Italian reporter what the Perestroïka meant for the USSR. While explaining that it had embarked on a new start, he also pointed to the 0 on his Raketa watch. From that moment on, the 0 has been prominently featured on Raketa watches. 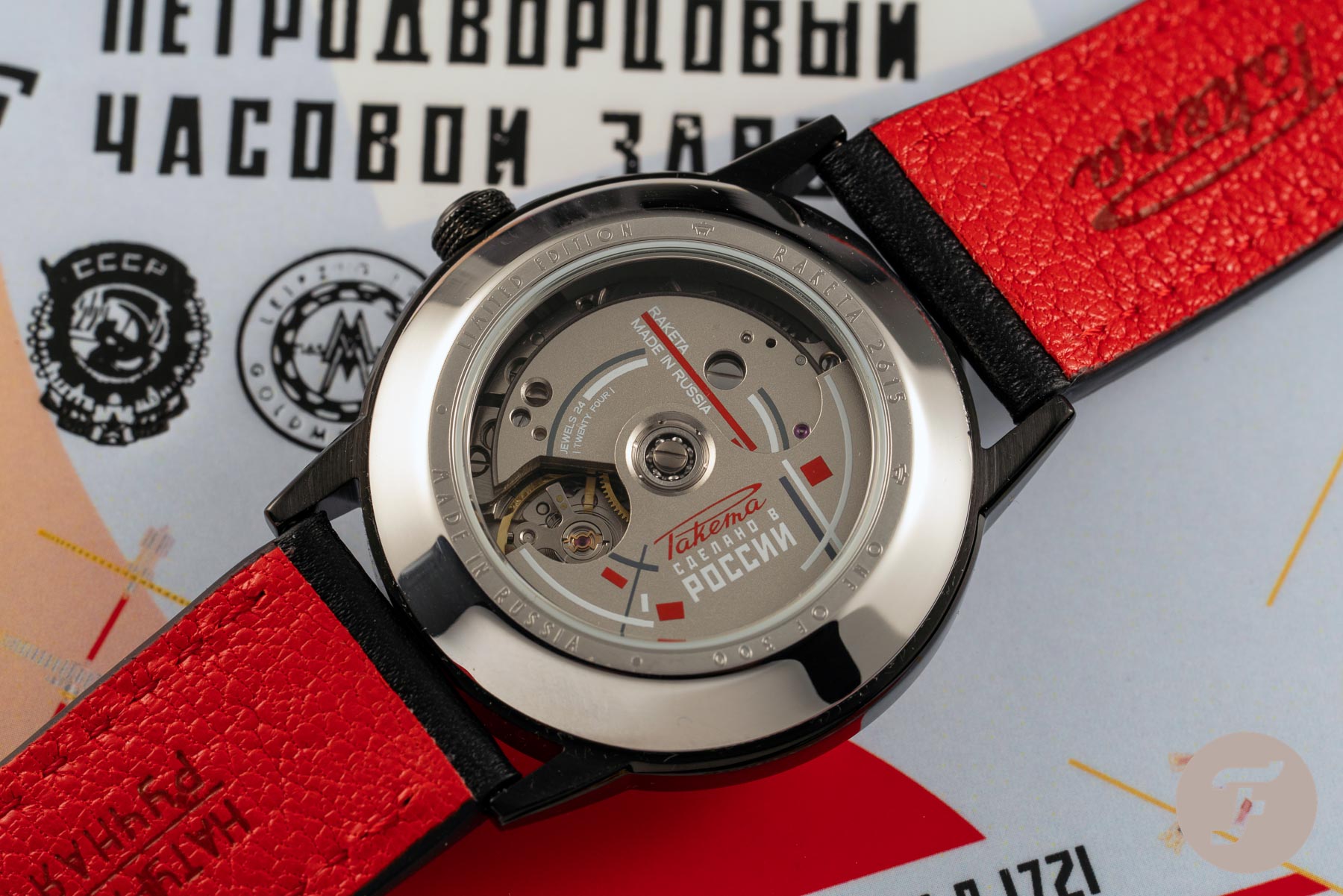 The black PVD case has a steel case back, fitted with a mineral crystal. It shows the automatic movement caliber 2615, which is made in the Raketa watch factory in Saint-Petersburg. Caliber 2615 ticks at 18,000vph and offers 40 hours of power reserve. It is a non-hacking movement with 24 jewels and is regulated in 4 different positions. The decoration on the movement is quite interesting, as it has the “Avant-Garde” printing on the rotor and main bridge. The case back itself is engraved with “Made in Russia” along with the limited edition number. 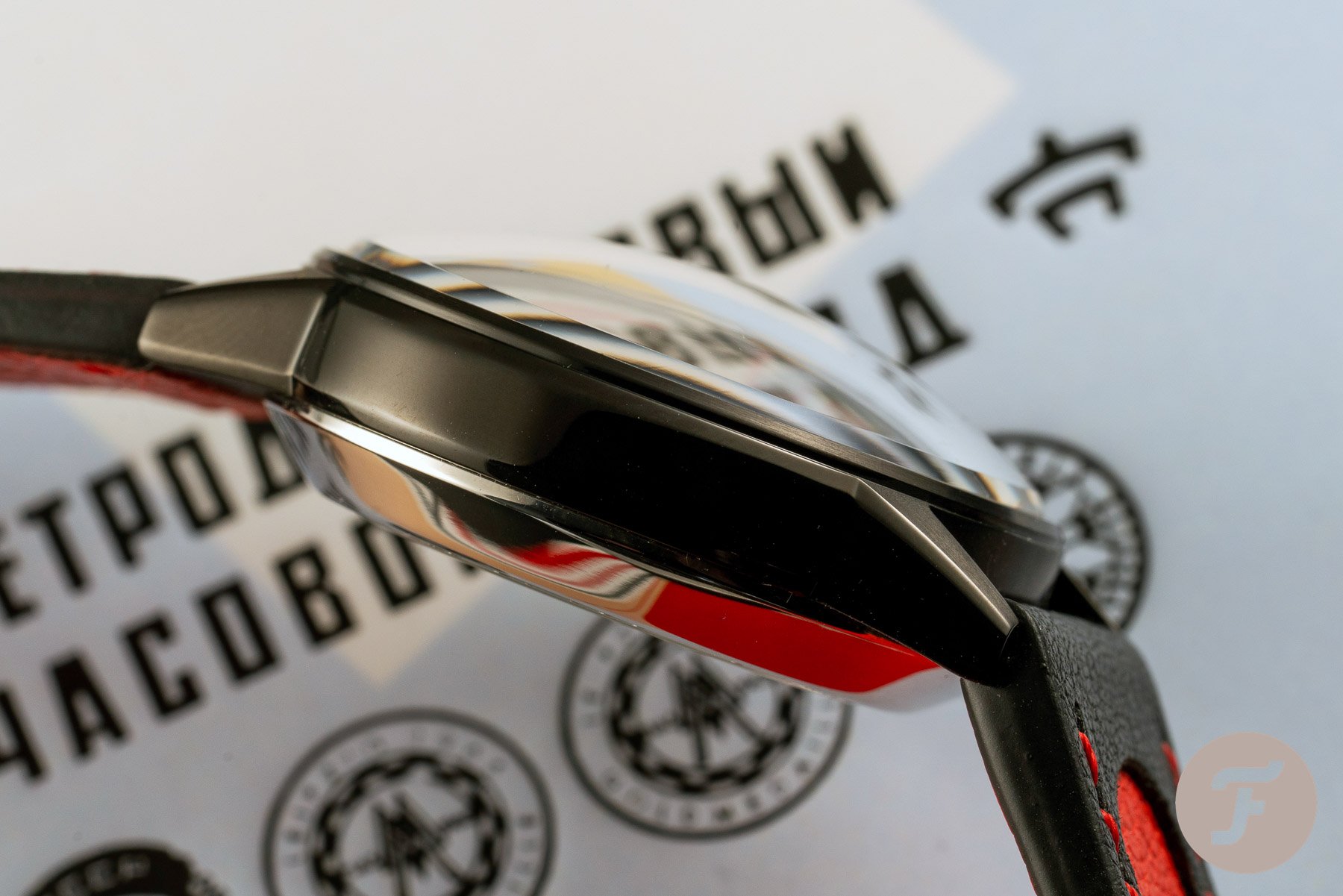 Raketa “Avant-Garde” on the wrist

The black leather 22mm strap with red stitching and red circles perfectly matches the rest of the watch. Besides, it is very comfortable and doesn’t need much time to break-in. The Raketa “Avant-Garde” has a very wrist-friendly diameter of 40.5mm and a lug-to-lug length of 45mm. This watch will fit most wrists, including those of smaller-wristed women. The black PVD case also features a black winding crown, with a touch of red. 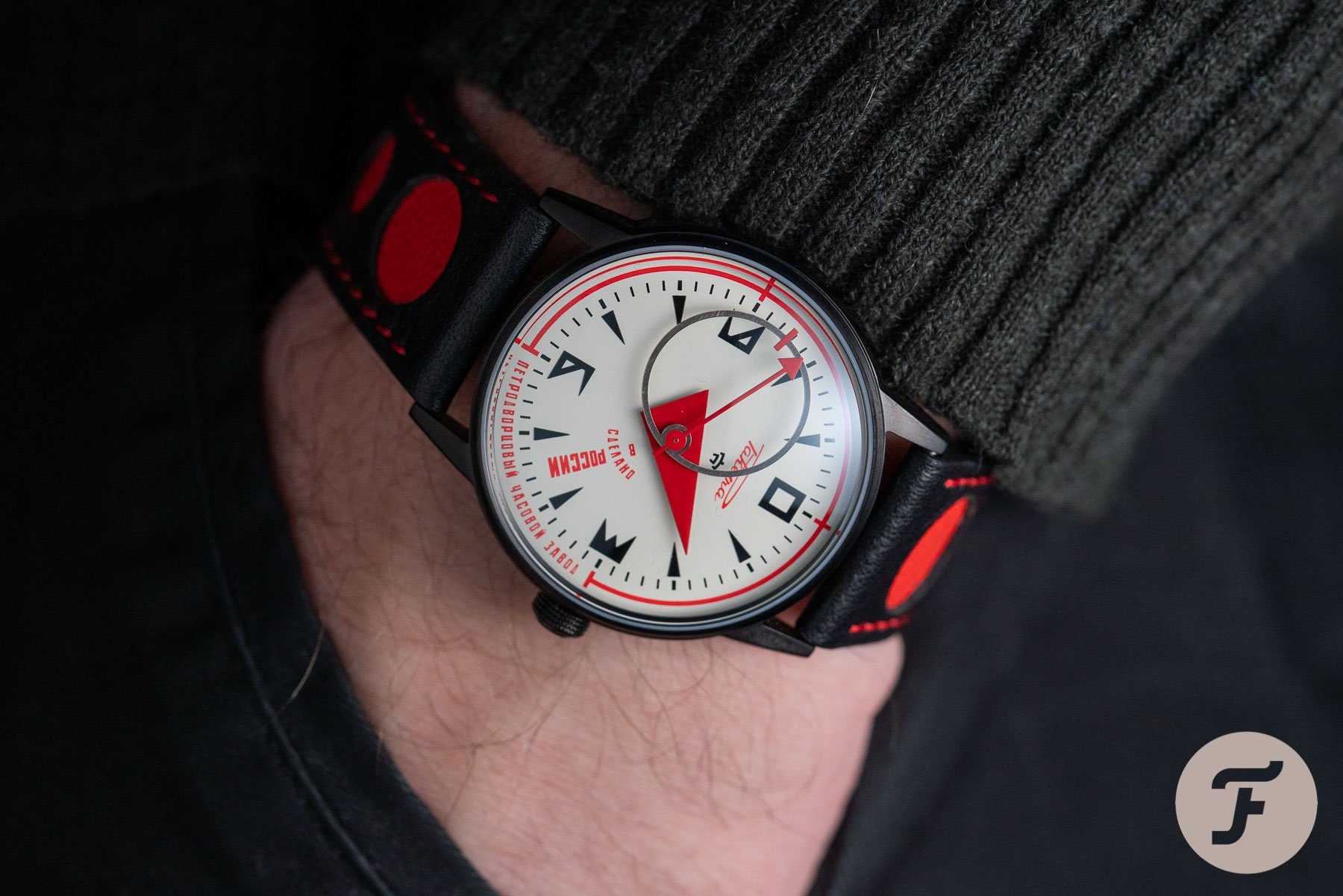 The entire watch is perfectly balanced when it comes to color and design, it just needs to suit your taste. What I perhaps love most about this watch, oddly enough, is the dial color. This off-white color, creamy almost, brings a little bit of subtlety to the table in this otherwise wild composition. 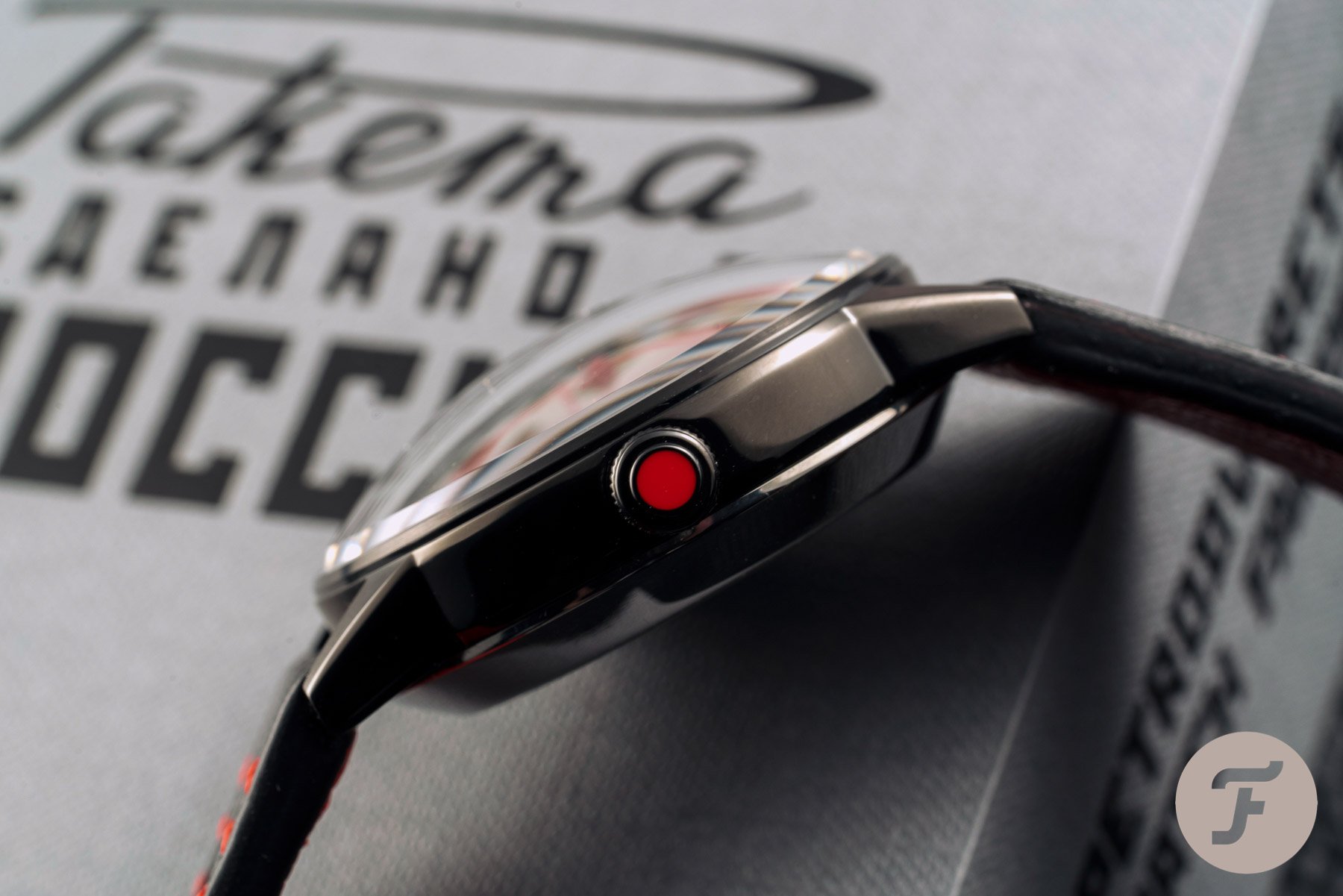 As you can see in the pictures above, the sapphire (front) crystal is super domed. So the artful shapes are not only to be found on the dial of the Raketa “Avant-Garde”, but it is also in the case and crystal. To me, the Raketa “Avant-Garde” is very much a fun watch to wear. It will definitely provoke some proper watch discussions as well, as most eccentric designs will do. 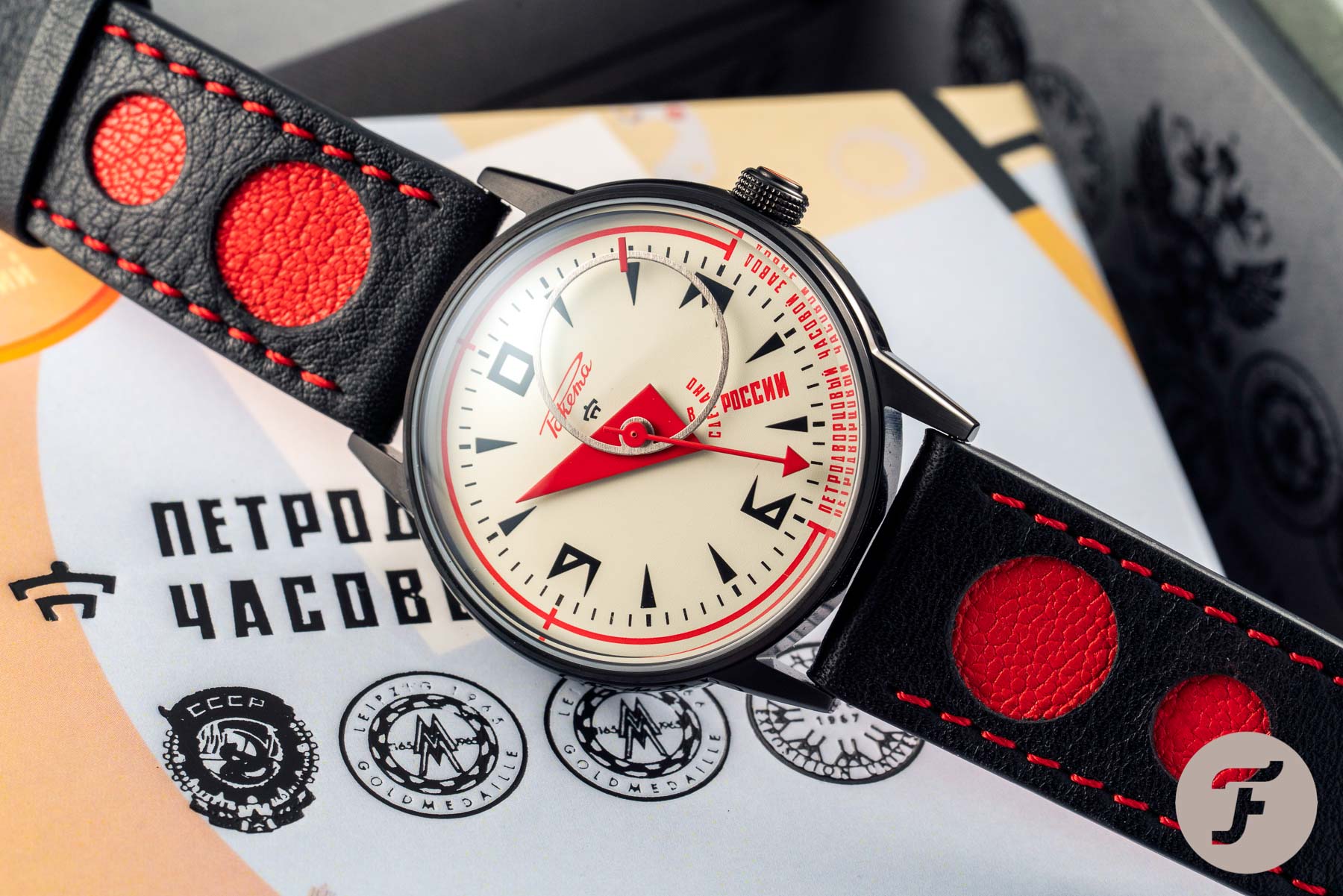 As indicated above, the Raketa “Avant-Garde” is limited to 300 watches only. The retail price of this watch is €1,125 excluding VAT, but includes free worldwide shipping. More information and direct online ordering can be done via the official Raketa website.

Hot Topics
Introducing: The New Seamaster Professional 300M 60 Years Of Bond — With A Special Animated Case Back
105 comments
Introducing: The Oris Divers Sixty-Five Fratello Limited Edition
104 comments
Are You Still After An Omega × Swatch MoonSwatch?
104 comments
It’s Time To Invest In A Dress Watch — Our Picks From Breguet, Omega, Grand Seiko, And More
74 comments
The Rolex Waitlist Conundrum — How Much Will The Price Of Your Watch Increase While You Wait?
50 comments
Popular
You Asked Us: Nomos Orion as a dress watch?
Gerard Nijenbrinks
9
Details Count: The New Oris Divers Sixty-Five Bronze Bezel
Michael Stockton
Tissot T-Touch Expert Solar II – Not a smartwatch
Balazs Ferenczi
4