Though the season for ice diving is quickly coming to an end, Bell & Ross celebrates those brave enough to dive under the frozen surfaces with the BR 03-92 Diver in white. Winter will not officially be over until the 20th of March. But the days have already started to get longer, and temperatures have begun their steady ascent. Soon, in those places where it is still present, the ice will begin to melt. Lakes will go back to their usual liquid state, as the surface layer melts away. However, in some of the northernmost regions, ice diving was still possible until just a couple of weeks ago. Just as hazardous as cave or wreck diving, ice diving is not for the faint-hearted. With today’s release, Bell & Ross pays homage to the thrill-seeking divers that dare to plunge into the icy depths.

The Bell & Ross BR 03-92 Diver is a perfectly qualified companion, complying both with ISO 6425 and NIHS standard 92611. That’s a reassuring feature when undertaking some of the most gear-challenging forms of diving. Modern dive computers have been known to succumb to the cold, their batteries draining prematurely in the icy temperatures. Therefore, wearing a watch, especially a mechanical one, is a good backup option, and one that could prove crucial. Featuring a specially crafted dial with an opalescent silver surface that appears white until you look closer, the BR 03-92 is an eye-catching new addition to the brand’s athletic line, offering nice contrast with the darker tones of its other offerings. 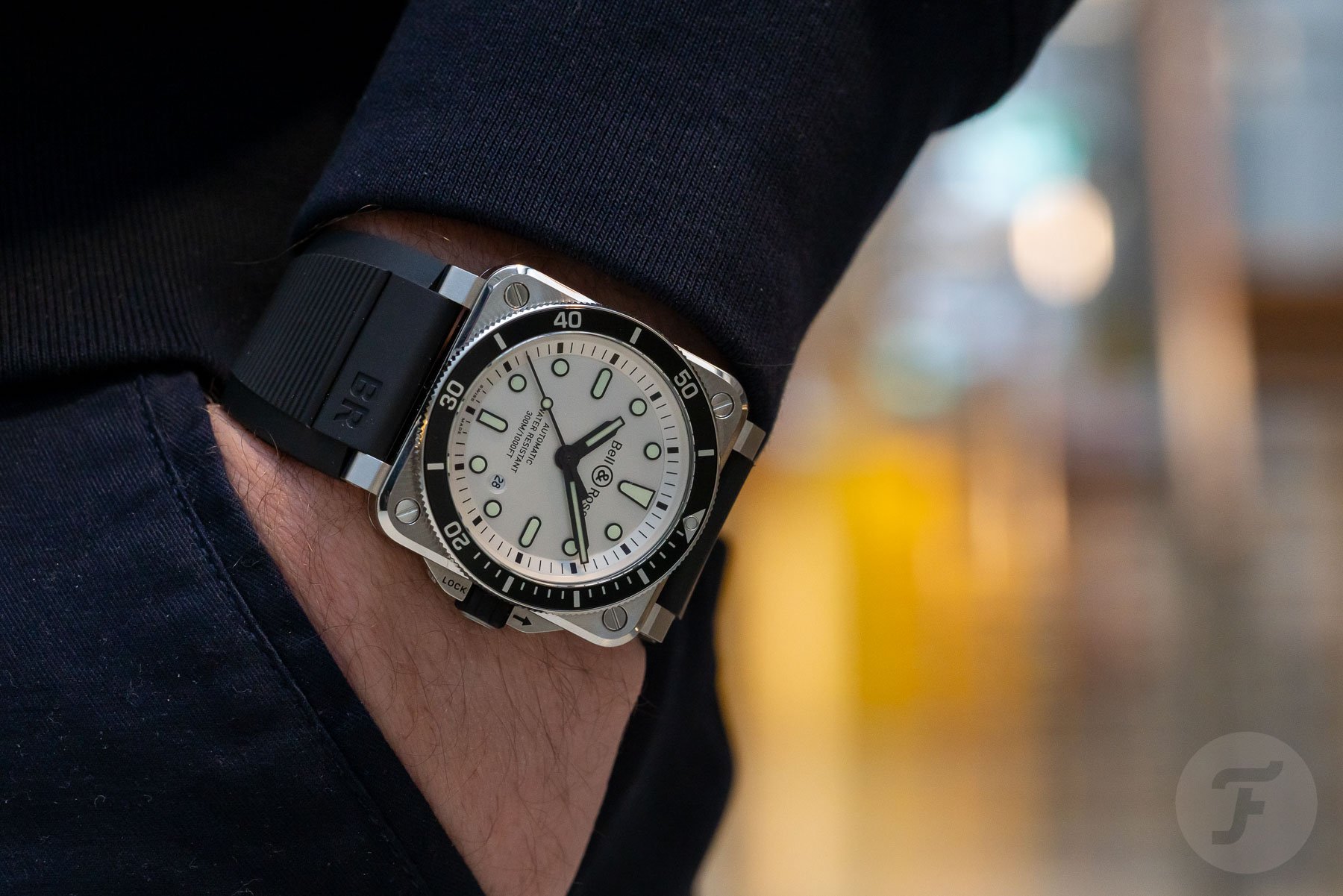 Though Bell & Ross is better known for its aerospace-themed watches, five years after the brand’s founding, in 1997, it ventured into the dive-watch space. Ever since then, its dive watches have aspired to the highest standards in the industry. The first dive watch was the HYDROMAX, in a more traditional rounded case. It was waterproof to an impressive depth of 11,100 meters! Following the HYDROMAX, in 2007, the barrel-shaped BR 02 case was used to create the brand’s second diver. It was 10 years later, in 2017, when the BR 03-92 Diver first made its way to market in the Bell & Ross signature square case. Since then, the brand has produced dive watches in steel and bronze, available in a number of classic colors as well as some more unusual colorways. This latest offering in white will be the first to feature the color in the current lineup.

The combination of the silvery-white dial and black bezel gives the watch a distinctive look. It’s highly legible and has a certain pared-back simplicity to it that works quite well with the angular case. Combined with a perfect signed and textured rubber strap, this watch looks just as at home over a wetsuit sleeve beneath the ice as it does with a black turtle neck at the office. It’s as classic and suitable for any occasion as a pair of black Ray-Ban Wayfarers. Contrasting perfectly with the shimmering white dial are the black hands and applied indices. Having been filled with Super-LumiNova, they light up beautifully after charging under natural or artificial light.

The square case has a 300m water-resistance rating, and the watch complies with ISO 6425 and the NIHS standard 92611. Inside, and operated by the special locking crown, beats the cold-resistant Bell & Ross caliber BR-CAL 302. Based, presumably, on the Sellita SW300-1, it runs at 28,800vph and provides 38 hours of power reserve. 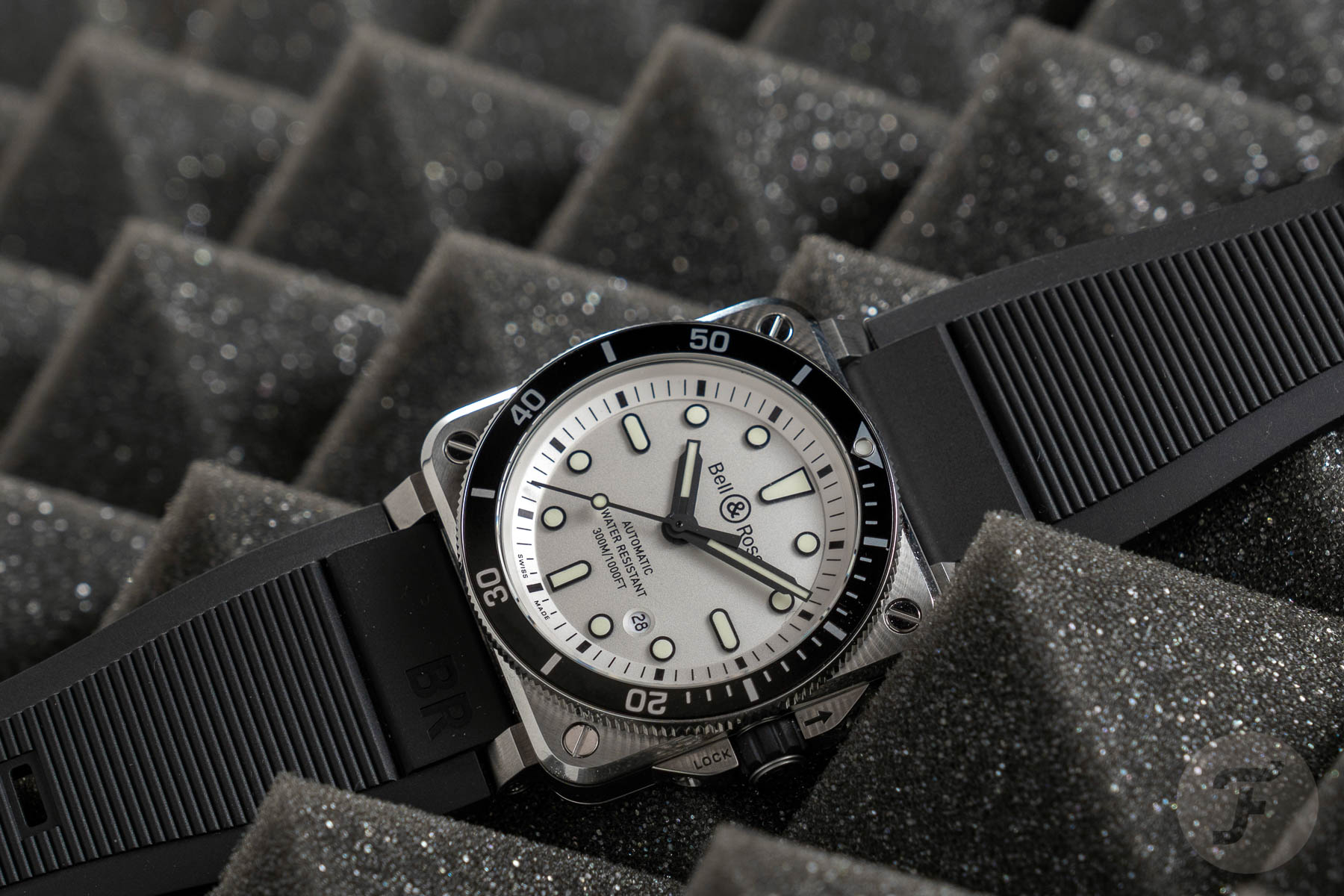 Much like the TAG Heuer Night Diver 300, the Bell & Ross BR 03-92 walks the fine line between capable tool and design object. It is uncompromising in both respects. Whether you seek your thrills meters below the surface of frozen lakes, or you’re simply a fan of minimalist design that surpasses the norm, I can see this watch appealing to you. On the wrist, this 42mm diver works better than you might expect. It wears large, but not overwhelmingly so. And thanks to its sub-13mm thickness, it maintains a comfortable profile on the wrist. Its unmistakably tool-like aesthetic and lovely silvery-white dial certainly make me want to get kitted up and give ice-diving a go! The retail price here in the Netherlands is €3,800. For more information and local prices where you are, please check the Bell & Ross website. 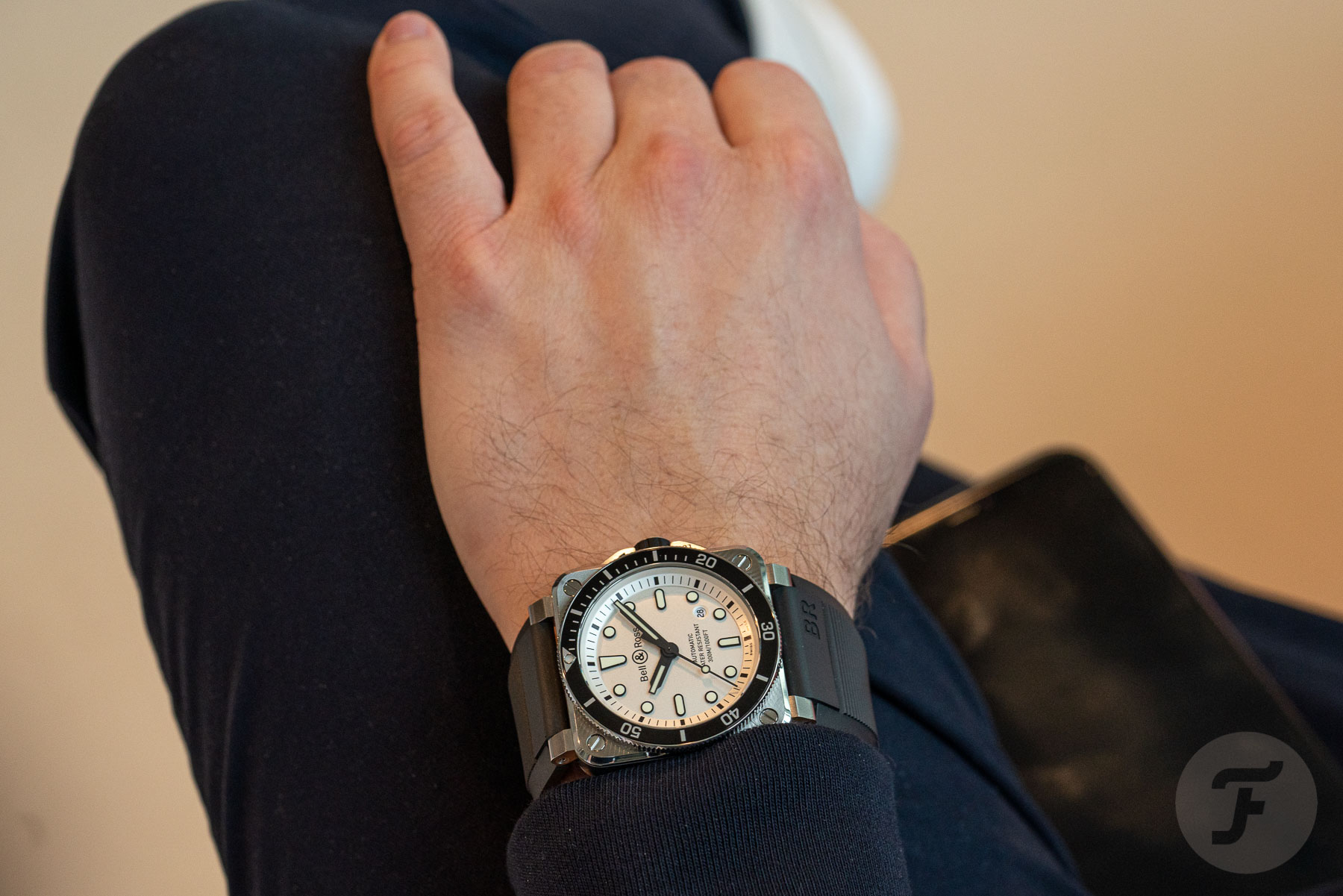 What are your thoughts on the Bell & Ross BR 03-92 Diver? As always, let me know in the comments below.

Hot Topics
Introducing: The Omega Speedmaster Super Racing With Spirate System
165 comments
New Release: The Limited-Edition Seiko Prospex SLA067J1 Diver
65 comments
My Predictions For New Omega Speedmasters In 2023
60 comments
The Best Independent/Microbrand Alternatives To The Rolex Explorer In 2023
53 comments
The Time To Buy Is Now: How The Current Economic Climate Influences Watch Buying And How You Should React
51 comments
Popular
A Question From A Reader: “Which Modern Speedmaster Is Closest To The Original Moonwatch?”
Robert-Jan Broer
14
Certina DS PH200M – Hands-On Review
Balazs Ferenczi
23
Hands-On With The Seiko Prospex Dawn Grey Series
Robert-Jan Broer
12