Were you always intrigued by oil-filled watches? I was! My first encounter with them dates back to the 1990s. At that time, almost simultaneously, Sinn, Bell & Ross, and Kienzle presented their first oil-filled models. Today, U-Boat boasts a full series of attractive oil-filled watches, and I got to try out the Darkmoon 44 MM Grey SS.

Sinn reluctantly transformed an existing diver’s model into the 810Q and eventually rated it to 8,000 meters. SIOK, the Italian agent for Kienzle, presented The Deepest in titanium, which was rated to 9,000 meters. It was later even updated to 12,000 meters while using a resin case. Bell & Ross had the Hydro Challenger (later Hydromax) rated to 11,100 meters in 1997 and was eager to say the brand was unique with its oil-filled watches. It was obviously not, but we have to understand that this was pretty much before the internet when things weren’t as transparent as they are now. 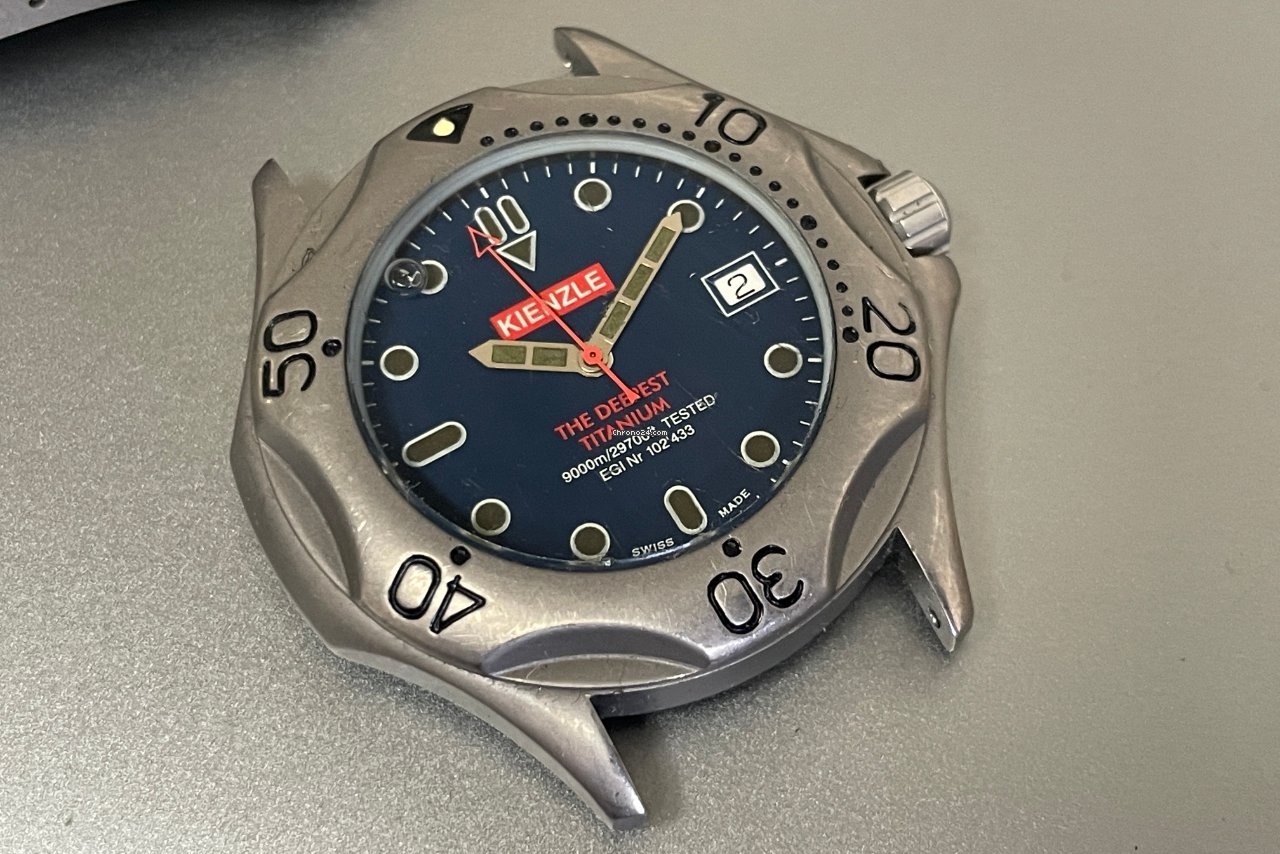 The examples mentioned above were aimed at solving the problem of pressure and depth ratings of diver’s watches. Despite depth ratings up to 12,000 meters, however, it became clear that the quartz crystal contained in a movement could not withstand a pressure of more than 500 bar. Equivalent to 5,000 meters, that would be much more than sufficient for any human-worn dive watch anyway. With the UX, Sinn still has an oil-filled dive watch in its catalog. 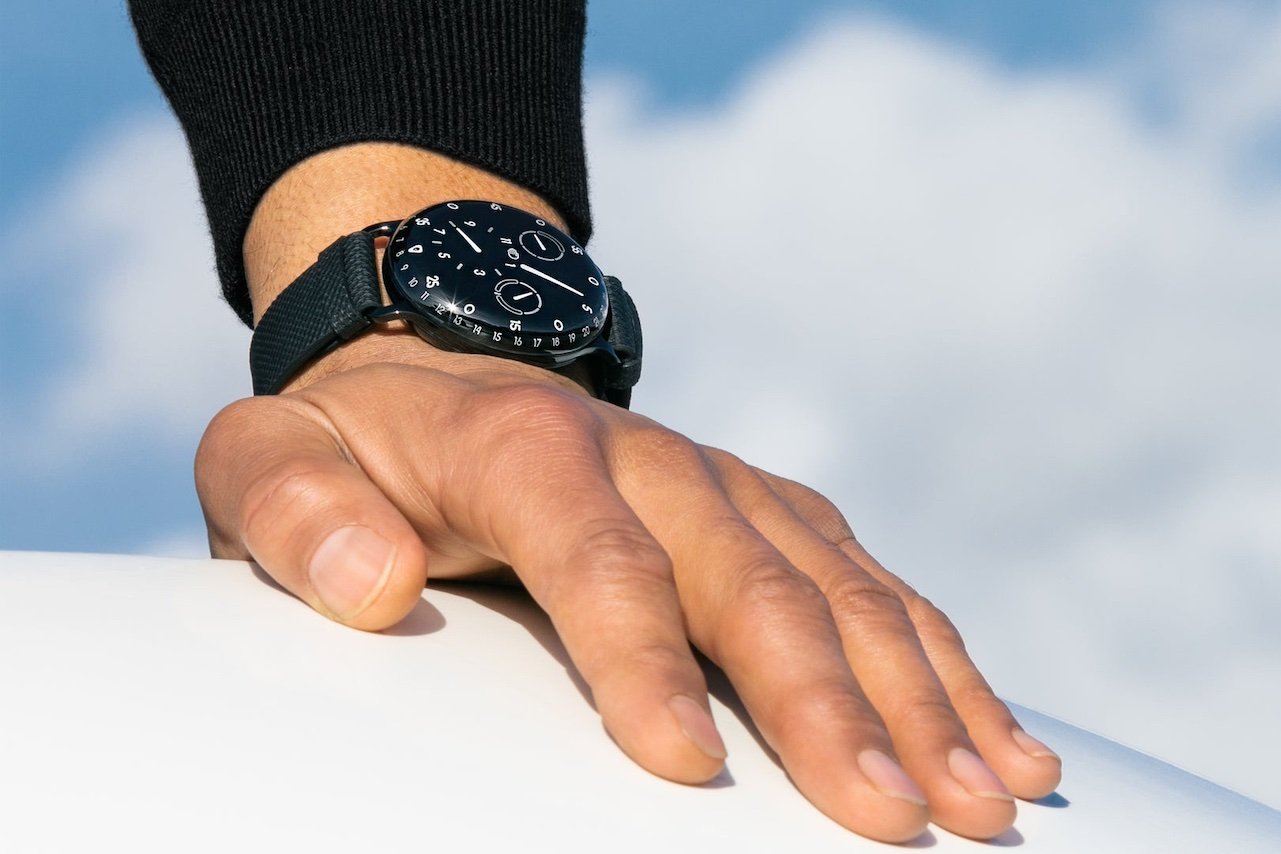 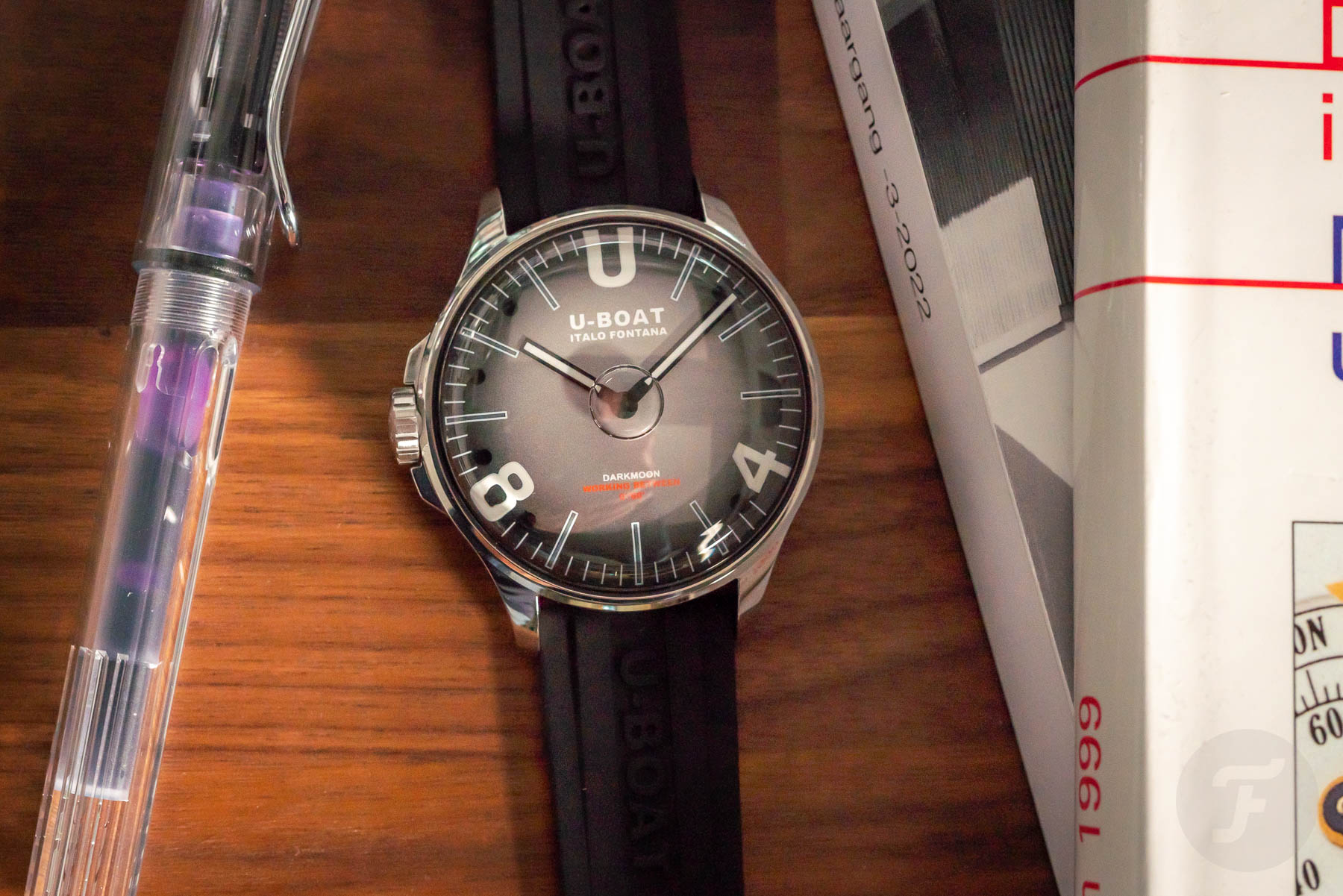 The appearance brings me to U-Boat. For aesthetic reasons, U-Boat uses oil-filling in two of its model series — the Capsoil and the Darkmoon. I was happy that U-Boat sent in one of the latter to write this hands-on review. The model that U-Boat provided me with was the Darkmoon 44 MM Grey SS. This nomenclature says it all: the watch measures 44.8mm in diameter, sports a grey dial, and has a stainless steel case. And it’s good that the model name is so descriptive because U-Boat offers many variations of the Darkmoon. There are 40mm and 44mm sizes, at least six different dial colors, two case colors, and even a version with a red-colored crystal. Don’t hesitate to explore all variations here.

The Darkmoon is no diver’s watch, so the reason for oil-filling can’t be the enhanced pressure rating. But the other advantage that oil-filling brings — improved readability and an attractive appearance — is exploited to the fullest.

Expansion of the oil

One of the first things you’ll notice when looking at the U-Boat Darkmoon is the air bubble under the glass in the oil. One might think this is a flaw, but it’s intentional and, in fact, necessary. 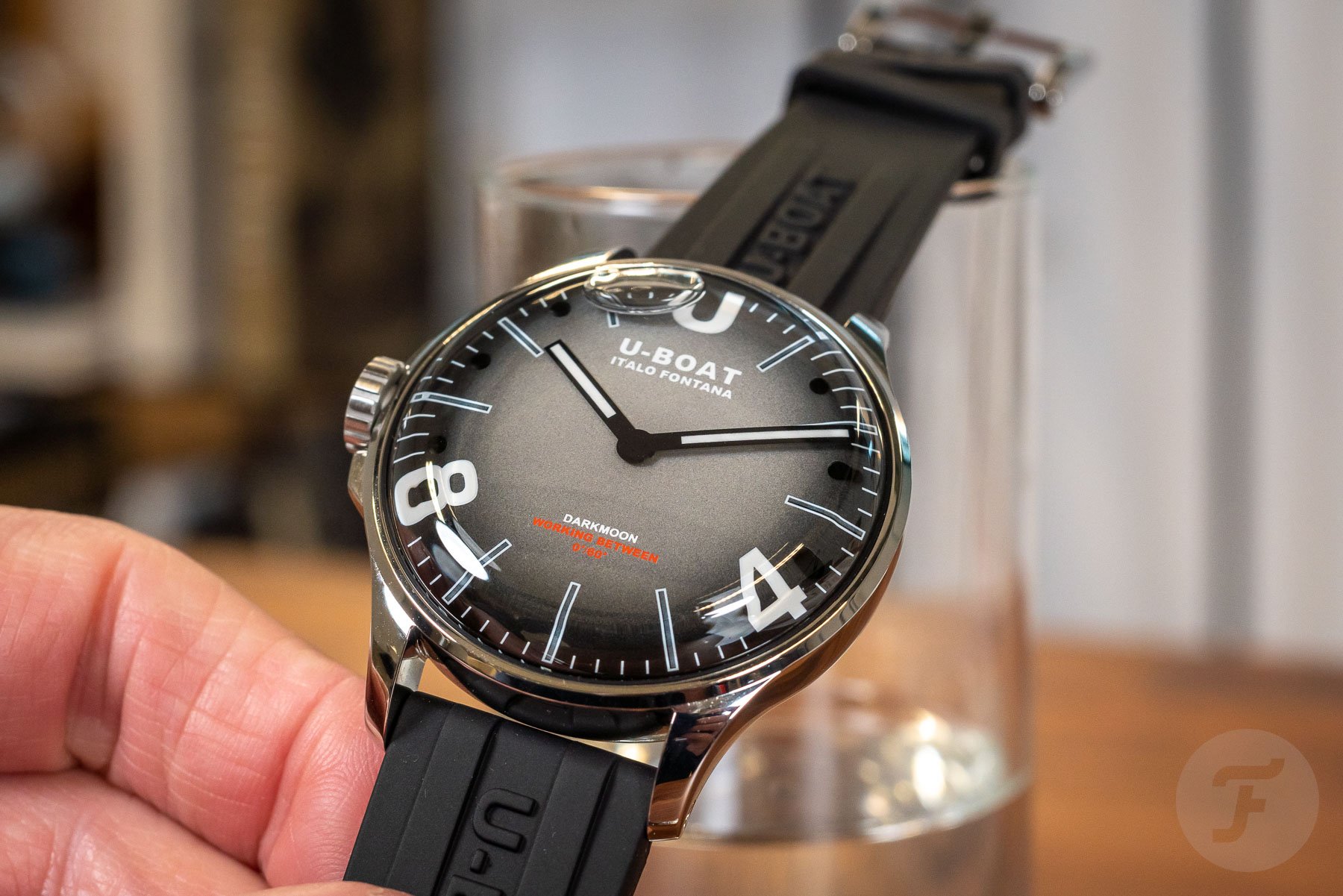 With temperature changes, the oil will expand and contract. Unlike air, oil isn’t compressible. So if the temperature of an oil-filled watch rises, the oil will expand, and if a watch case is fully filled with oil, the oil has nowhere to go. To tackle this problem or situation, different watch brands found different solutions. Sinn uses a case back that acts like a membrane. When the oil inside the watch expands due to increasing temperatures, the inner part of the case back slightly moves outward. Ressence invented a neat, specially designed system where seven air- or gas-filled bellows are placed inside the movement in the oil. These bellows expand or compress to compensate for changes in the oil’s internal volume between -5° and +55° Celsius. This range covers all temperature situations a watch might encounter. 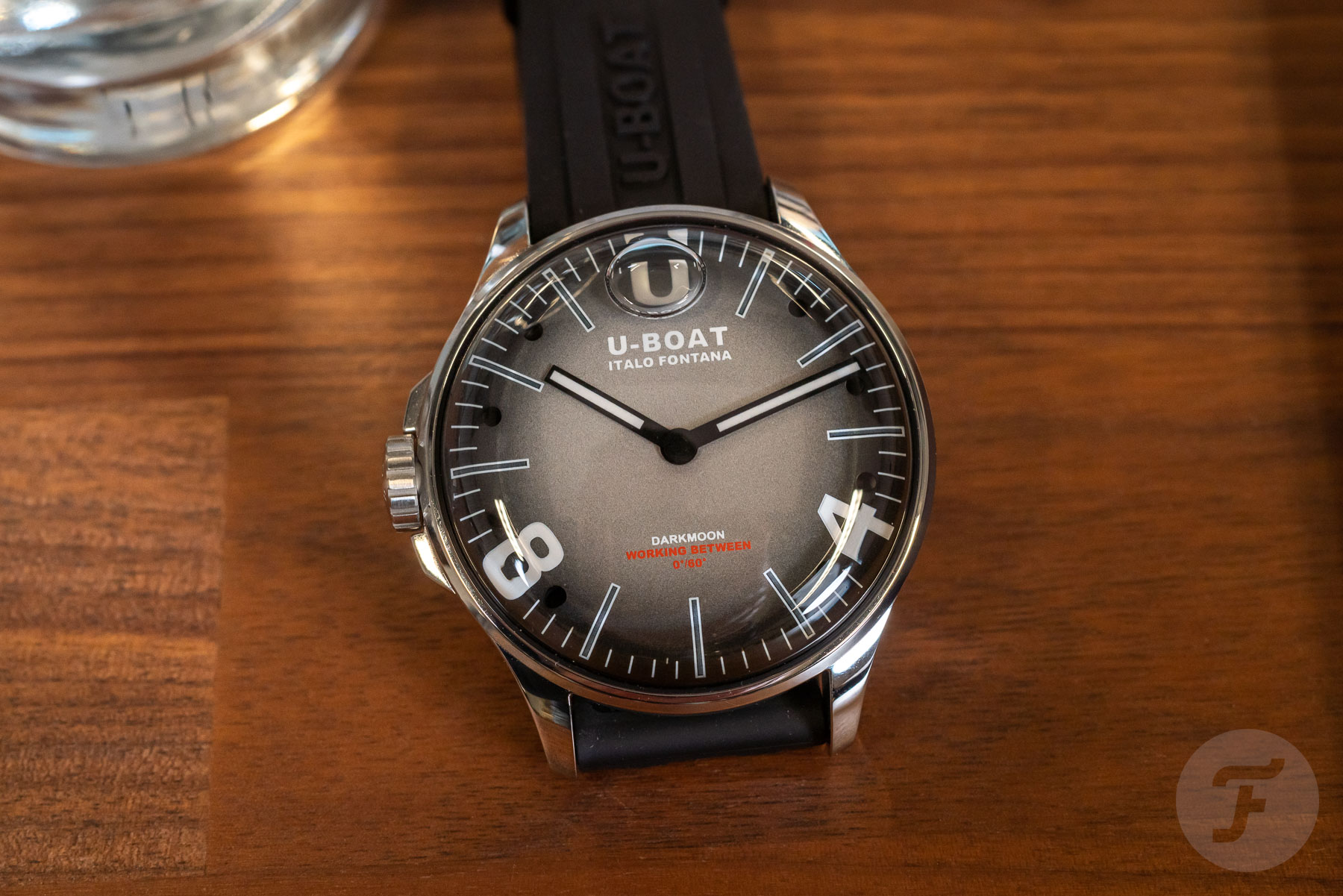 However, a simpler system leaves a little air in the oil. A bubble of air can compress and retract and act equally as well as Ressence’s bellows. The big difference is that the air bubble freely moves through the oil and will be visible on the dial. To me, the air bubble in the Darkmoon isn’t annoying at all. I’d even say I like it as it’ll be an excellent conversation starter. I do wish the bubble had been slightly smaller, but I guess its size is probably calculated with the expansion and retraction of the amount of oil in mind. For this watch, it’s very well possible that a smaller bubble wouldn’t do the job correctly. As we can see in the picture of the Kienzle The Deepest at the start of this article, the air bubble is much smaller, but I’m sure the amount of oil in the watch is too. 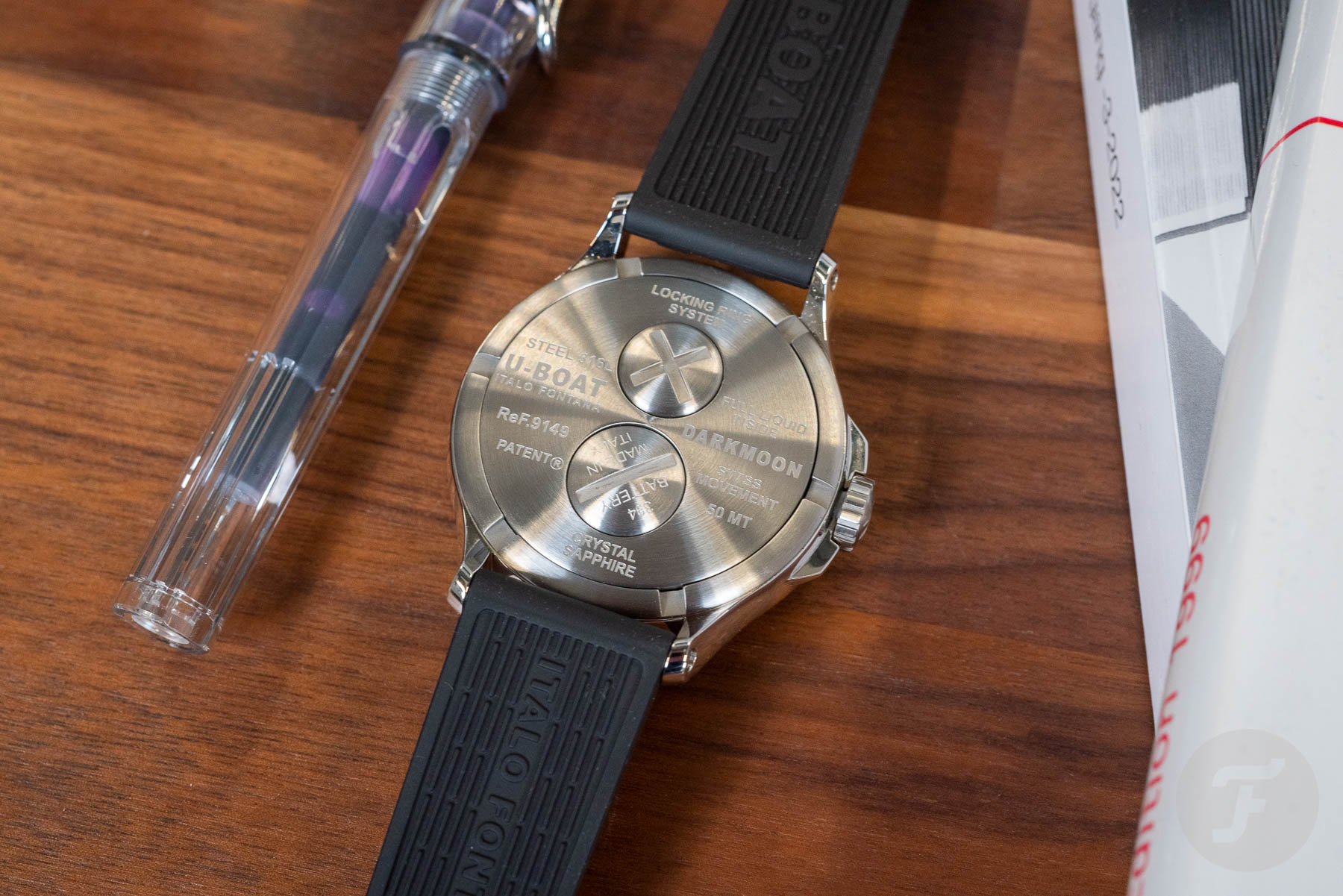 What else is good?

With battery-powered oil-filled watches, there’s always the fear of changing the battery. Without precautions, the oil will spill out when opening the watch to change the battery. Not with the U-Boat Darkmoon. The brand developed an innovative locking system (Locking Ring System), allowing for quick and worry-free battery replacement. Another feature that I welcome is the left-hand crown. Specifically, with a watch of this size and a crown on the right side, there’s always the risk of irritating the back of your hand. I’m happy to report, though, that this Darkmoon is pretty comfortable to wear despite its 44.8mm diameter. The rubber strap is soft enough, and I like that it sports a regular pin buckle. For me, especially on more substantial straps, that’s often more comfortable than a folding buckle. 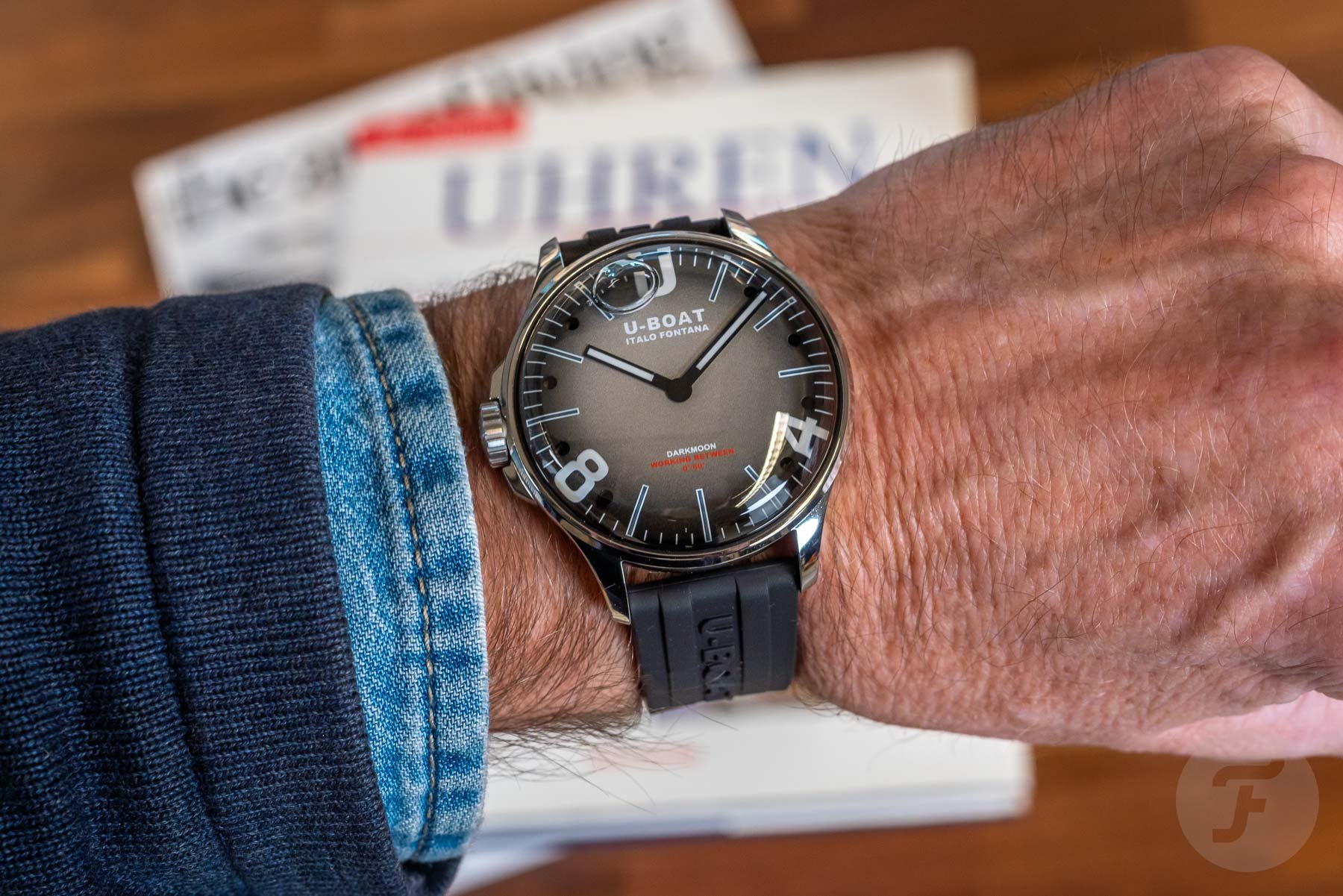 I enjoyed wearing the U-Boat Darkmoon Grey 44 MM Grey SS. I think I was attracted to it because of a picture on Instagram, and in real life, it didn’t disappoint. Although the 44.8mm size suits my 18cm (7″) wrist, I think I would opt for the 40mm version if I wanted to buy one. Of course, U-Boat is famous for larger-sized watches, but I believe the 40mm version would be less showy because of its size and more attractive thanks to its extraordinary aesthetics.