A collaboration of the highest order. It is so good, you can’t tell for sure who is helping who here. Contributions are equal. You can see both parties’ influence, but the end product feels different. It’s just better. Louis Erard × Alain Silberstein Le Régulateur combines best from both DNAs in a unique piece that doesn’t have competitors. Why?

I always respected and admired Louis Erard for its obsession with regulators. Since the brand’s rebirth in the early 2000s, watches with three separate hands became its primary focus. That was a shame, but it was understandable. I can imagine it needs a lot of persistence to go against the mainstream. 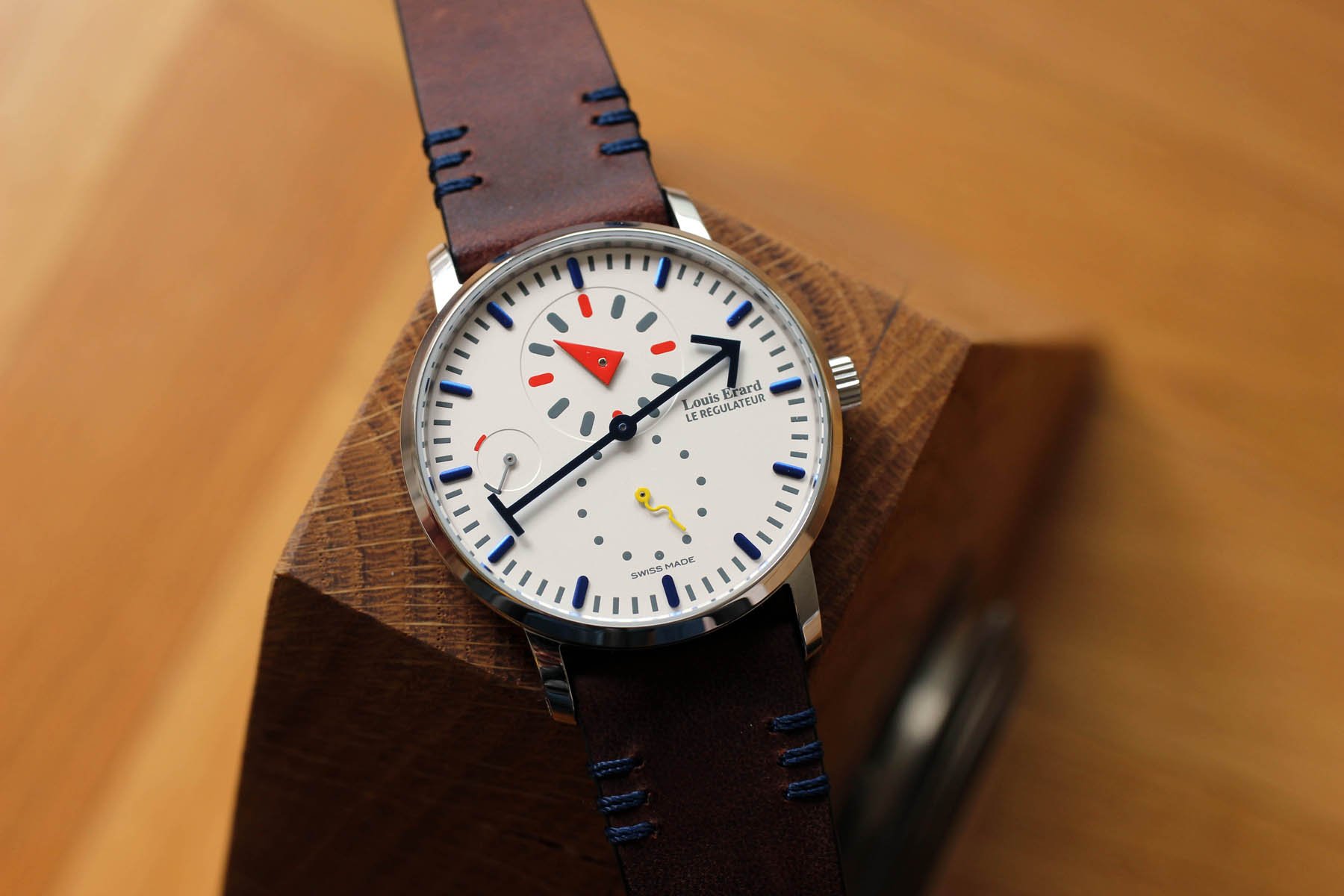 French artist Alain Silberstein has been bringing bold colors to horology for three decades now. It would not be far from the truth to say his daring watch hands have shaped many creative efforts trying to disrupt conservative standards in watch design.

Until last year my attitude towards both brands was quite emotional-less. However much of a soft spot I had for Louis Erard, the brand was yet to create a model that could threaten my bank balance. I was aware of Alain Silberstein and his signature elements, but none of his watches (and their price tags) featured on my wishlist. It was always a bit too much or too far even for my vivid imagination. All that changed in the middle of the last October when Louis Erard × Alain Silberstein debuted this regulator watch. 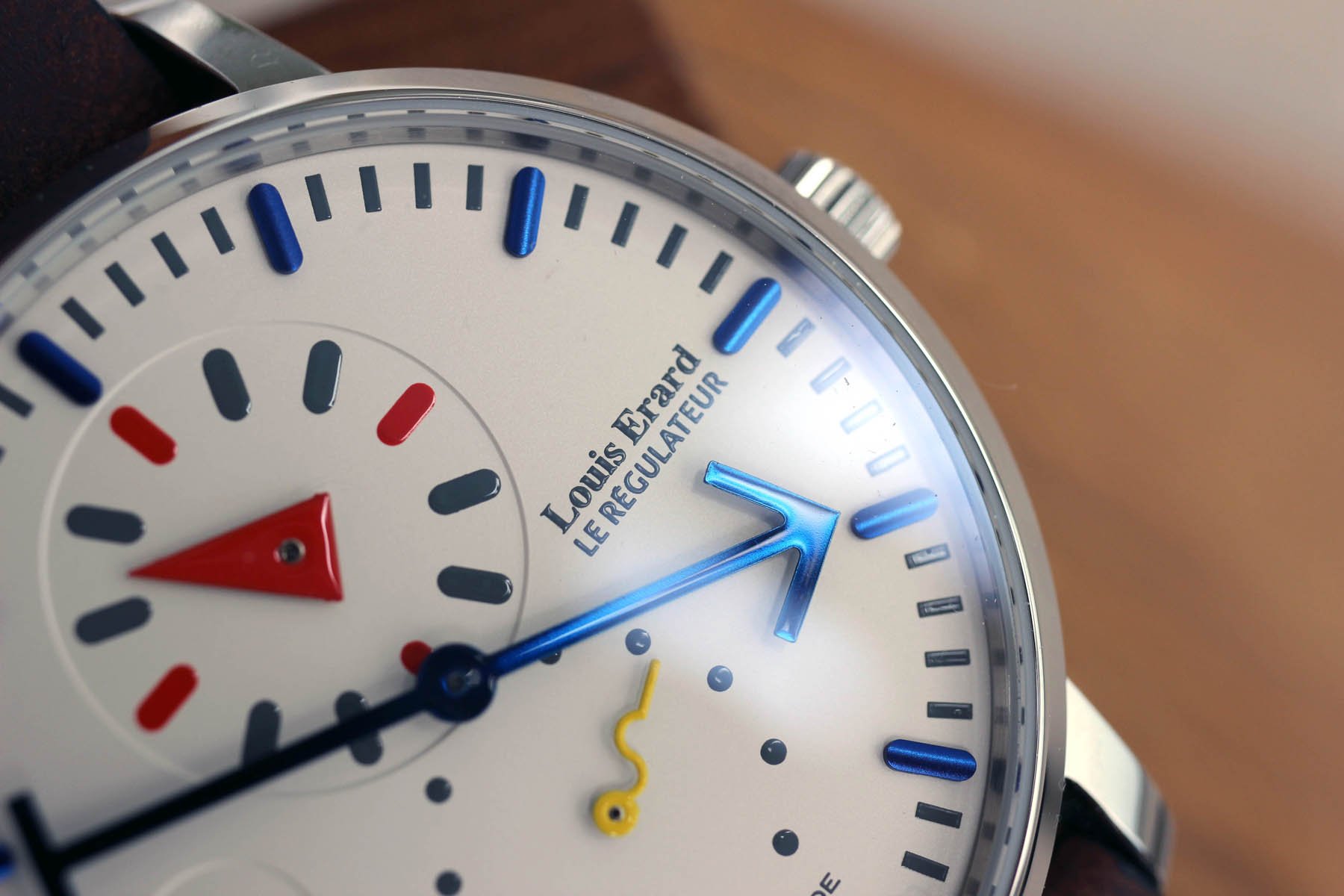 From Alain Silberstein to Louis Erard

That’s how I see it. Alain Silberstein gave Erard and its regulators some juice. At the same time, he lent them his visual code, built over decades. He gave them a minimalistic version of his maximalist expressive elements. Silberstein gave Erard not only shapes and colors, but also sound, style, confidence, and charm. But don‘t get me wrong, it’s not going to be a one-way handout.

From Louis Erard to Alain Silberstein

Louis Erard gave Silberstein as much as they took. Until I saw Le Régulateur I could not explain what was missing from Silberstein’s watch designs for me. I knew they were too much but I didn’t know why. This new model finally answered that question for me. I got it as soon as I saw the new Le Régulateur watch.

Erard gave Silberstein essential space. The regulator watch gave Silberstein room to build the story for each element. All of the crazy elements coalesced where they might have clashed before. What I see now is a better manifestation of Silberstein’s philosophies. I see a well-matured enfant terrible and I cannot resist it. 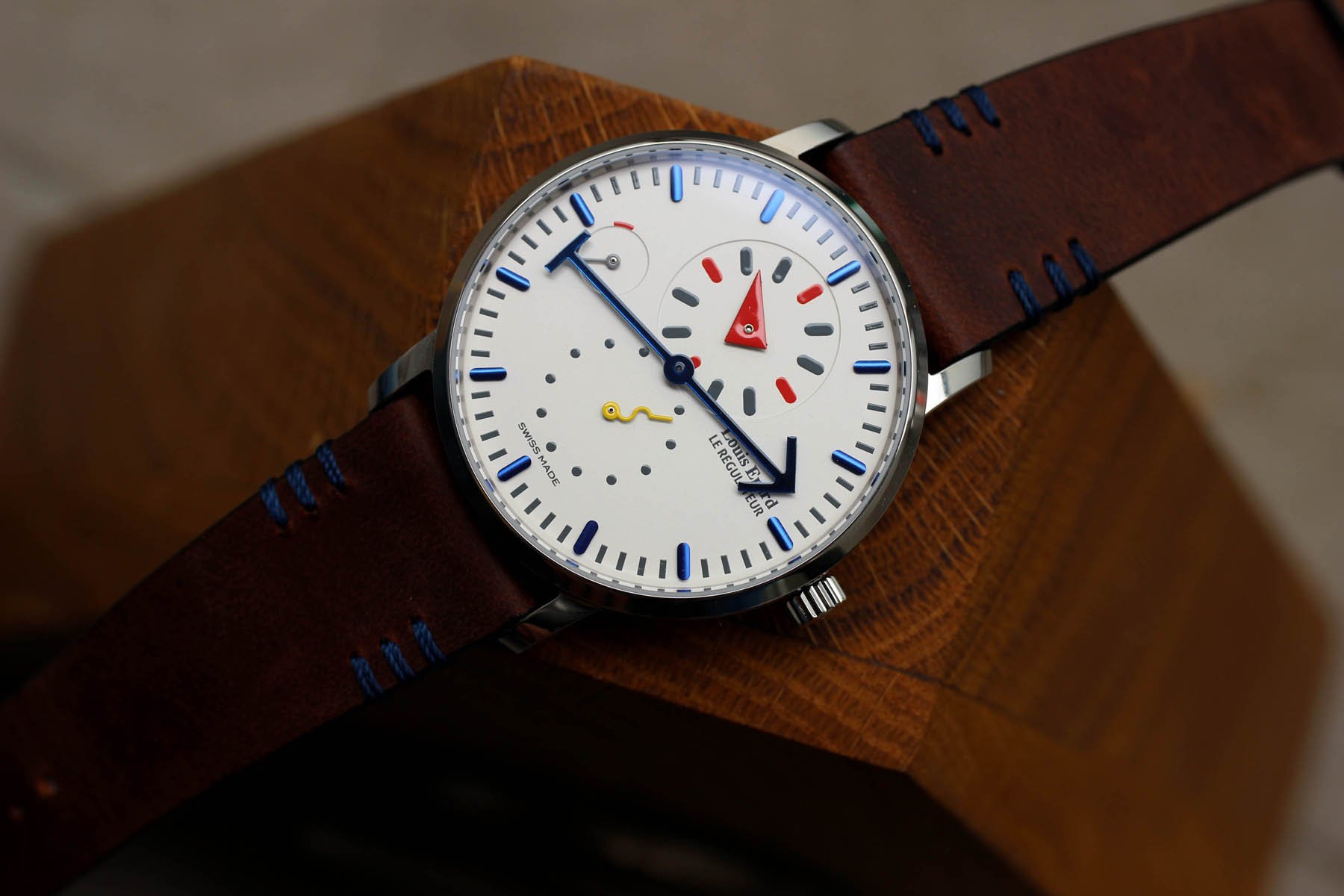 Louis Erard × Alain Silberstein Le Régulateur watch is available in two versions. There is a stainless steel version that comes with a white dial and black PVD has a black dial with a contrasting white sub-register displaying the hours. Both models are numbered up to 178. I repeat, there aren’t thousands of them. Not even two hundred for one color is a very limited run. I guess it will be challenging to get one of these pieces once they‘re sold out. And according to the news from the Louis Erard team saying that only the last few pieces are for grabs, it won’t take long for that to happen.

My choice was clear

The black variation is a bit more extroverted and more daring. A contrasting white ring on a black dial draws too much attention and disrupts the balance so needed for a regulator watch, in my opinion. I’m not saying it’s bad. But rather, I prefer a clean version where all of the regulator’s major elements get equal priority. When an opportunity for a hands-on review arose, I didn’t hesitate for a second. I was instantly hooked by the white version, that I consider more elegant and more faithful to the regulator style. 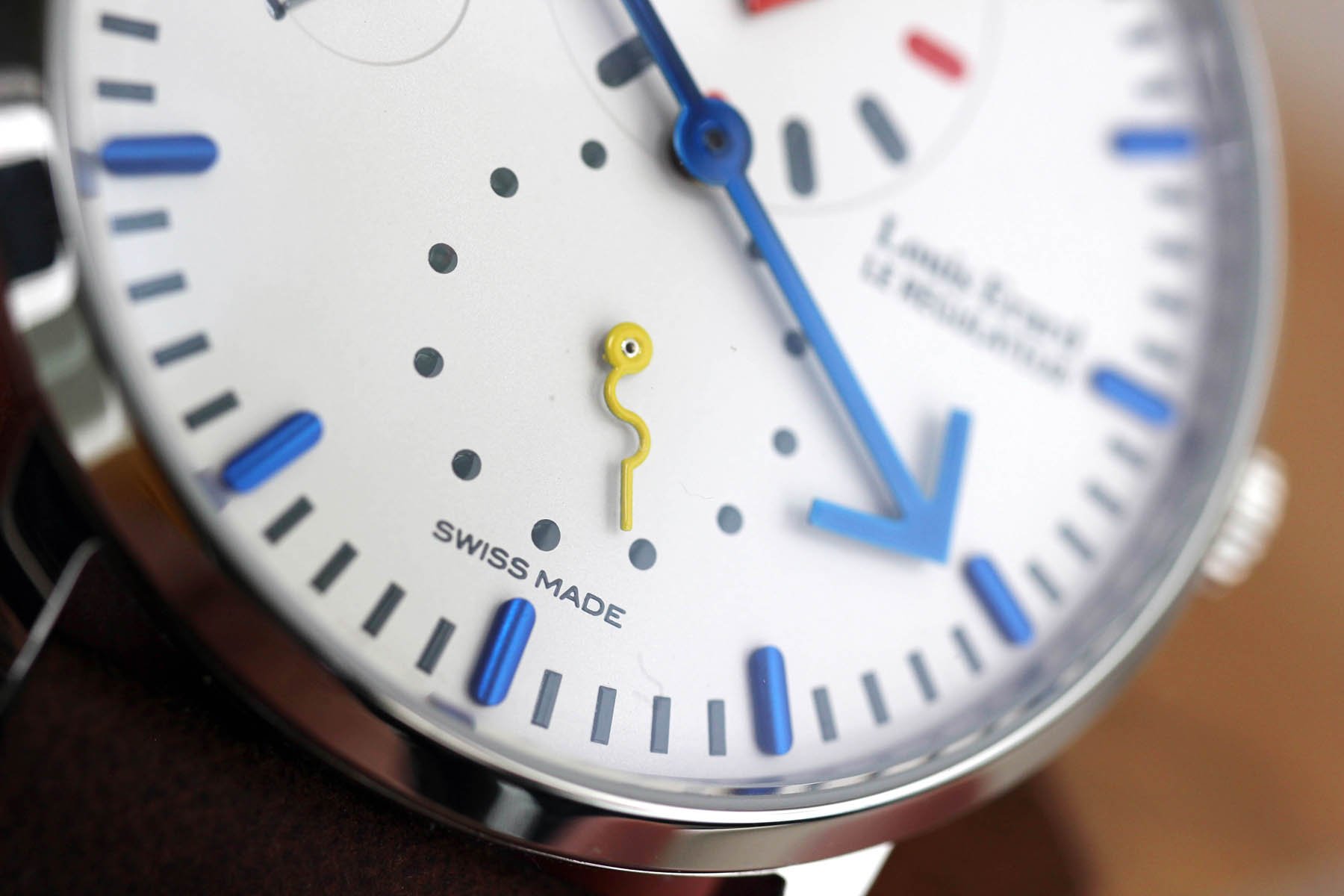 I wouldn’t change single detail on the dial. The dial ring that shows hours is slightly sunk and gives the watch more plasticity. I feel like the hours and the rest of the dial are competing in the black variant, but the white dial lets all the elements sing in a harmony.

The cardinal hour indexes are printed in the same hot red as the simplistic triangular hour hand. All the other hour indexes and dots forming the second track are in grey. The only yellow accent was assigned to the serpentine hand, which looks especially cute.

The central minute hand is nothing but majestic in size and style.

Round-edged and especially proud five-minute indexes in blue make a strong statement, but they do not disturb. The central minute hand is nothing but majestic in size and style. At its core, it is a simple design. The basic arrow shape is inspired by traditional train station clocks. The color (and the form of the hand) however, are far more arresting than one would expect to find on a train station platform. 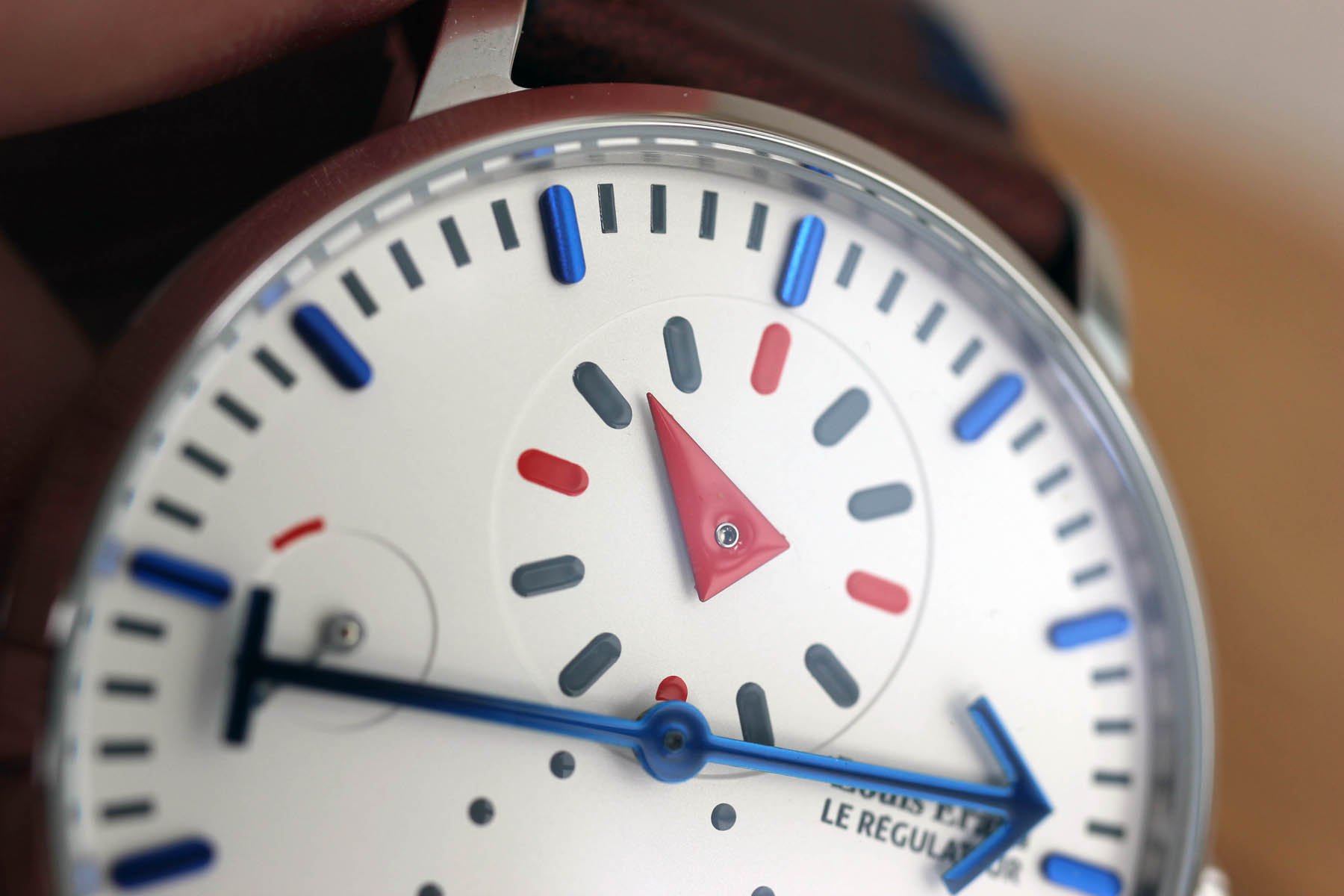 One of my favorite elements is the power reserve indicator. It is a quiet (and rather polite) feature that perfectly counter-balances Louis Erard Le Regulateur branding at three o’clock. The cherry on the cake is manual wound ETA Peseux 7001 movement with an additional Louis Erard RE9 complication on top. 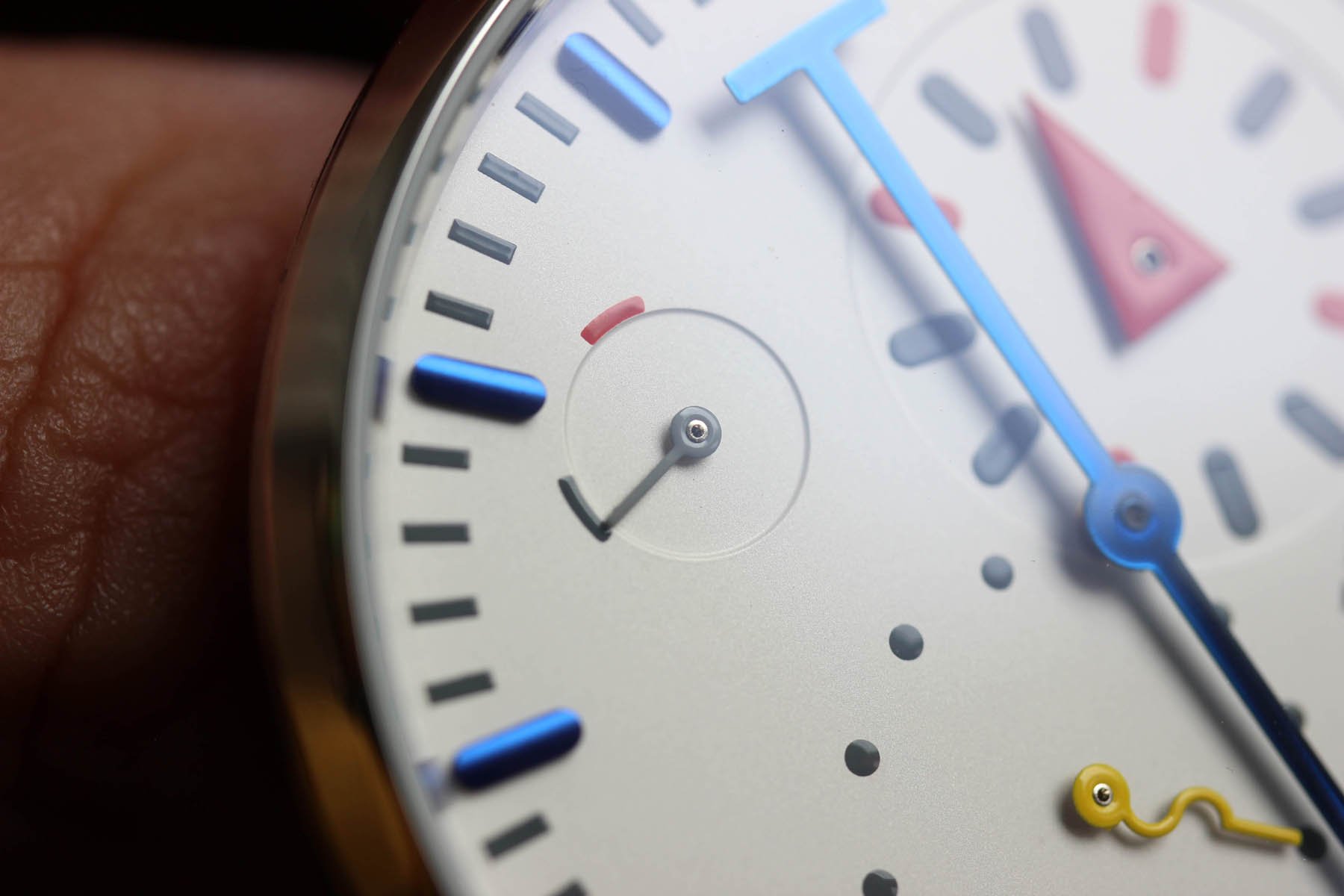 The lugs look thin, but quite standard when you look from the top. Only profile view reveals their truly original round shaping. The crown seems unaccountably small at first glance, but the winding experience is good. It‘s secured thanks to the steeply sloping case and the long tubular neck hiding the stem. Your finger can slide comfortably under the crown and winding is splendid. Chunky buckle mirroring the lug’s style made me smile any time I saw it. The brown leather strap is tender to the wrist, but I am afraid a lot of people might miss one more hole for a tight fit.

Louis Erard says that they have never given carte blanche to a designer. While Alain Silberstein had never before designed a regulator watch. The best news is that both parties involved apparently knew what they were doing. Silberstein and Erard gave their best and managed to create highly individual but at the same time very elegant and sleek regulator watch. If you pitched me this idea before they put pen to paper, I might have worried about the result. 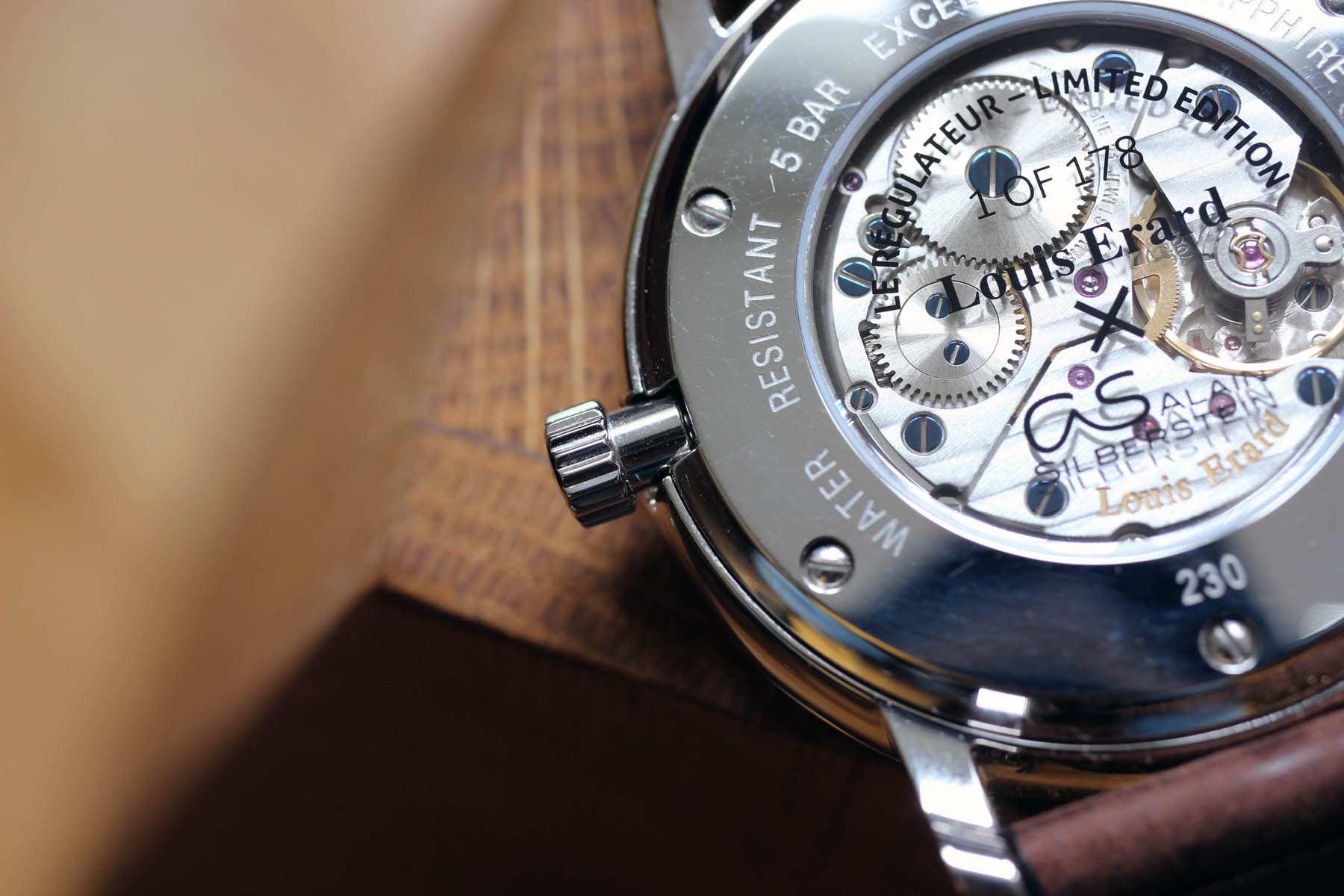 After a week on the wrist, I am convinced. This combination is glorious. The playfulness and simplicity of the Louis Erard × Alain Silberstein limited edition is a pleasure to behold. Everything hangs together well. The proportions, the colors, and the shapes mesh expertly. Le Régulateur is a universal watch that pairs with jeans as easily as it slides under the cuff. It’s different and it’s comfortable. It attracts eyes but collects respect for the uncommon complication. A manual winding and functional power reserve indication come as a bonus. I am really tempted not to send it back to Louis Erard. If you are considering a new watch around €2,500, don’t think too long.