Alarm watches are among the most incredible pieces the vintage world can offer. Almost every major brand had an alarm in its collection, from Angelus, Tudor, and Omega to Citizen, Enicar, and Vulcain. That last brand stands out from this crowd for a simple reason. In 1947, Vulcain released the Cricket, the world’s very first alarm wristwatch.

Now, 75 years after this legendary achievement, Vulcain is reviving the Cricket in two new models. With the help of watch-industry veteran, Nivada Grenchen and Excelsior Park co-owner, and all-around nice guy Guillaume Laidet, the brand presents the Cricket Classique and the Cricket Tradition. 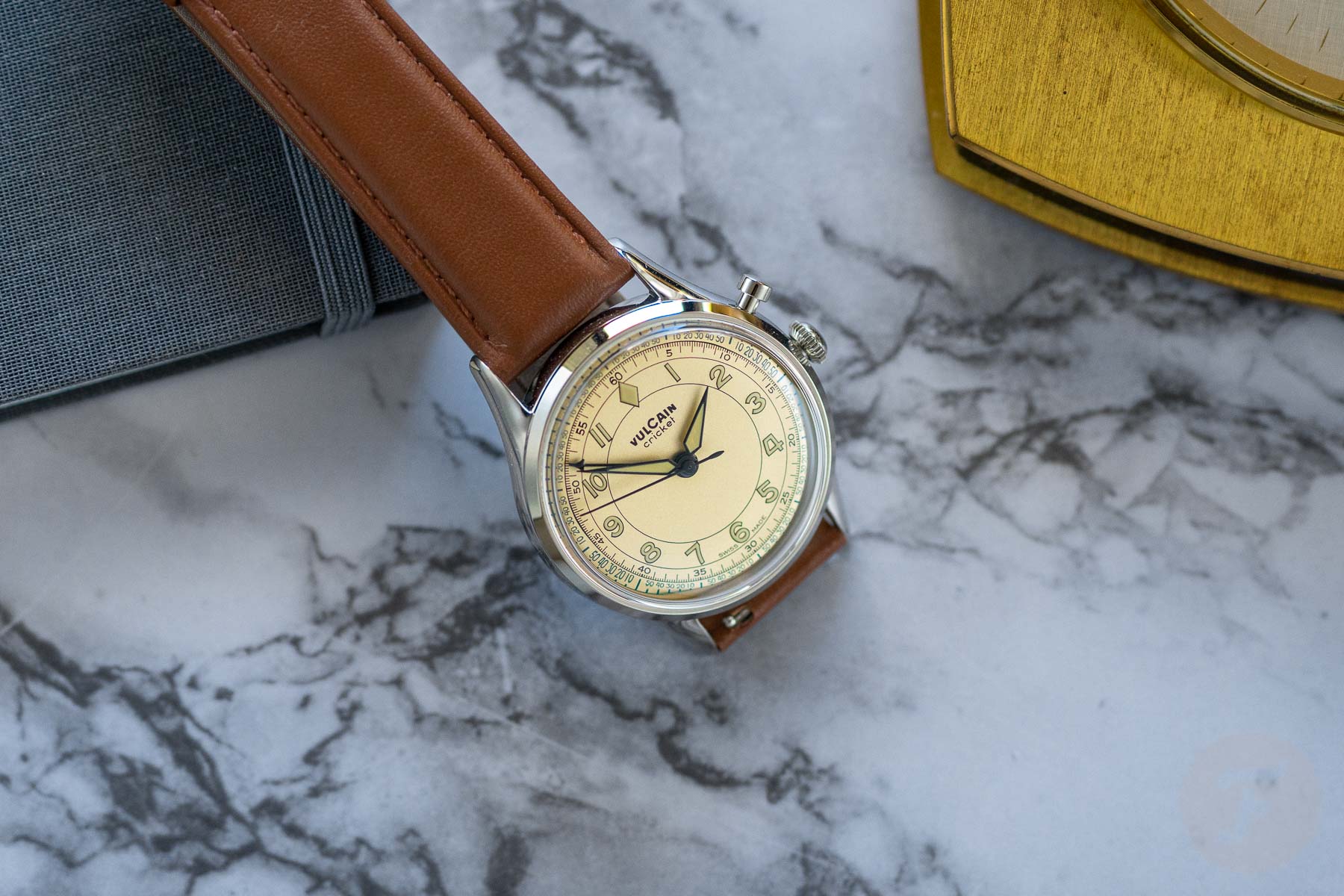 It would be useless for me to dwell on the history of the Cricket. Tomas has already done a fantastic job of covering some of the most notable vintage models from his collection. I suggest you read his articles on these beautiful little pieces. However, if you want a quick rundown of the story, here are some key facts. Vulcain came to life in 1858 in Neuchâtel, Switzerland. It was founded by the Ditisheim brothers, who took the name from the Roman deity Vulcan, the god of fire, volcanoes, and smithery. Although the brand was known for producing complications, great success came in 1947 when Vulcain launched the Cricket alarm wristwatch collection. This immediately bolstered the brand’s reputation not only in Switzerland and Europe but also overseas. US Presidents Truman, Eisenhower, Nixon, and Johnson were all Cricket wearers, which led to the model’s moniker, the Presidents’ Watch. 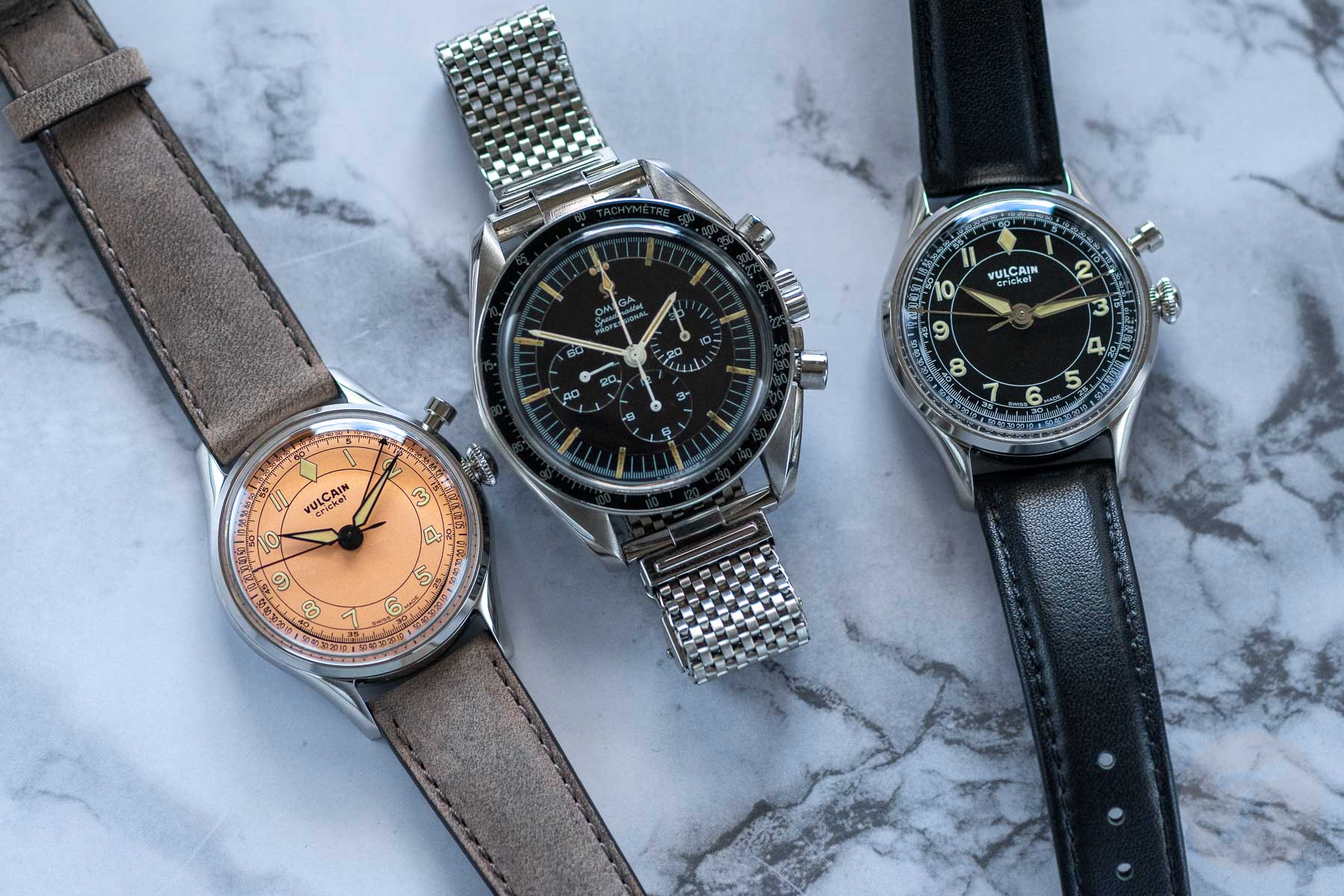 Now, with the help of Guillaume Laidet, Vulcain is releasing a watch that closely resembles the very first Vulcain Cricket timepiece that hit the market 75 years ago. Better yet, there are a plethora of options to choose from. The Vulcain Cricket Classique features a dial design that is a virtual recreation of the vintage dials, albeit in a few different colors. In a 36mm case, it’s the closest you can get to the 1947 original in size and design. But for those who would like a more modern size, it is also available in a 39mm case. Alongside the Cricket Classique models I have here, Vulcain is also releasing the Cricket Tradition collection. These models also come in both 36mm and 39mm cases, but their dials feature non-luminescent applied indices and all-polished hands. 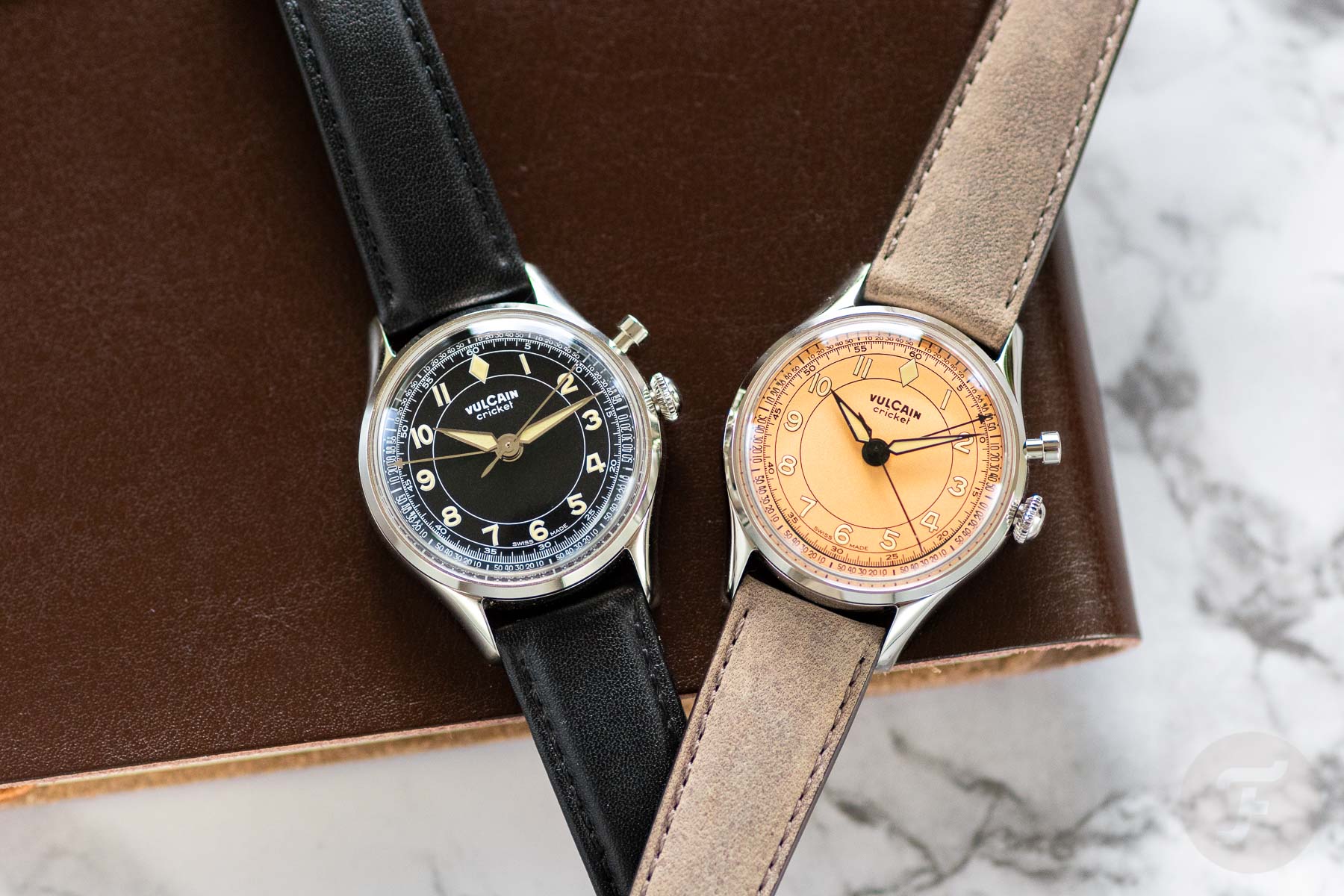 As you’d expect from any watches that Guillaume Laidet lays his hands on, both the 36mm and 39mm models will be available in several colors. These tones include salmon, beige/khaki brown, eggshell, and black. The salmon-dial Classique and Tradition pieces will be limited to 50 pieces each, while the other dial variants will be regular-production models. So even if you are not the biggest fan of salmon and limited editions, you’ll likely find a Cricket that tickles your fancy. 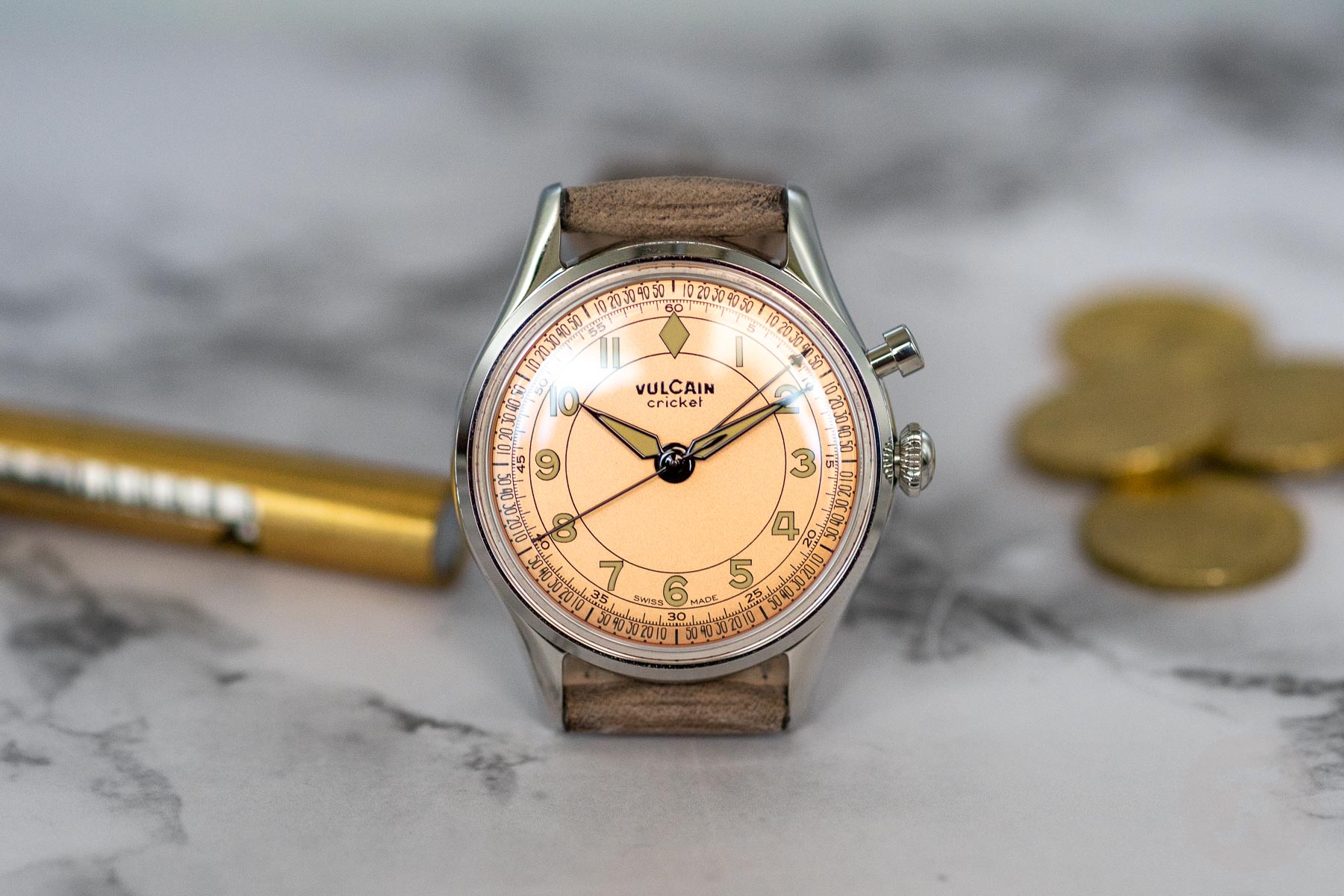 Many watch brands in the past used third-party calibers in their alarm watches. A. Schild (ASSA) was one of the most prolific manufacturers of these movements. I wrote about it in my article on the Angelus Datalarm. However, inside all of the new Cricket models is the Vulcain manufacture caliber V-10. Here, we have a hand-wound, mechanical alarm movement with 25 jewels. The V-10 consists of 165 components, utilizes two barrels (one for the alarm and one for the time), and employs Vulcain’s friction-reducing Exactomatic system. It also has a frequency of 18,000vph and a 42-hour power reserve.

The alarm will ring for around 20 seconds on a full wind. I must say, it’s rather loud, especially if you place the watch on a wooden surface, such as a bedside table. On the samples that Vulcain sent me, the case backs were solid steel, but there is also an option of a display case back. Through it, you can see the V-10 movement’s blued screws, skeleton ratchet wheels, and nickel-plated treatment.

Furthermore, for a fun horological experience, you can watch the alarm hammer strike over 1,000 times in its 20-second run. To see what I mean, check out this video of the V-10 movement in Brandon’s older Heritage Cricket. 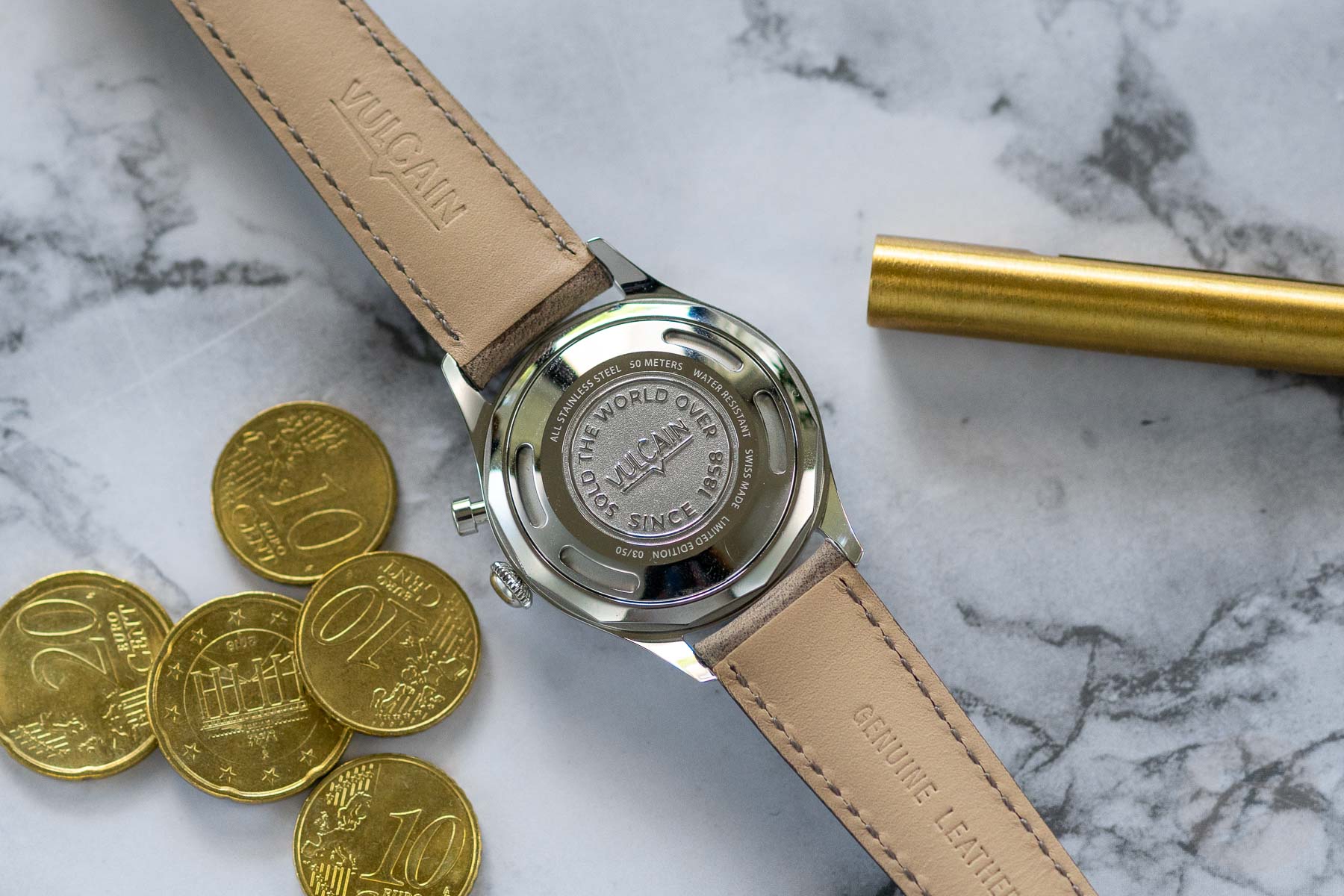 While I wear a lot of 36mm watches, I felt that the 36mm Cricket Classique in salmon and black looked a bit small on me. The polished bezel is thin, so the watch looks like it’s mostly all dial. I must say, however, that I enjoyed wearing the 39mm beige version a bit more. I also enjoyed the refined nature of the Cricket’s setup.

You see, many alarm watches have two crowns. There is usually one at 2 o’clock and another at 4 o’clock, used for winding and setting the alarm and the time, respectively. The beauty of the Vulcain Cricket, as it was in the past, is that you only have one crown and a pusher. The latter acts as a selector for setting the alarm. To do so, simply push it down until the crown pops out to the alarm-setting position. But you can also wind both barrels through the crown by turning clockwise for the alarm and counterclockwise for the time. That cleverness makes the Cricket look much classier and more straightforward than other alarm watches. 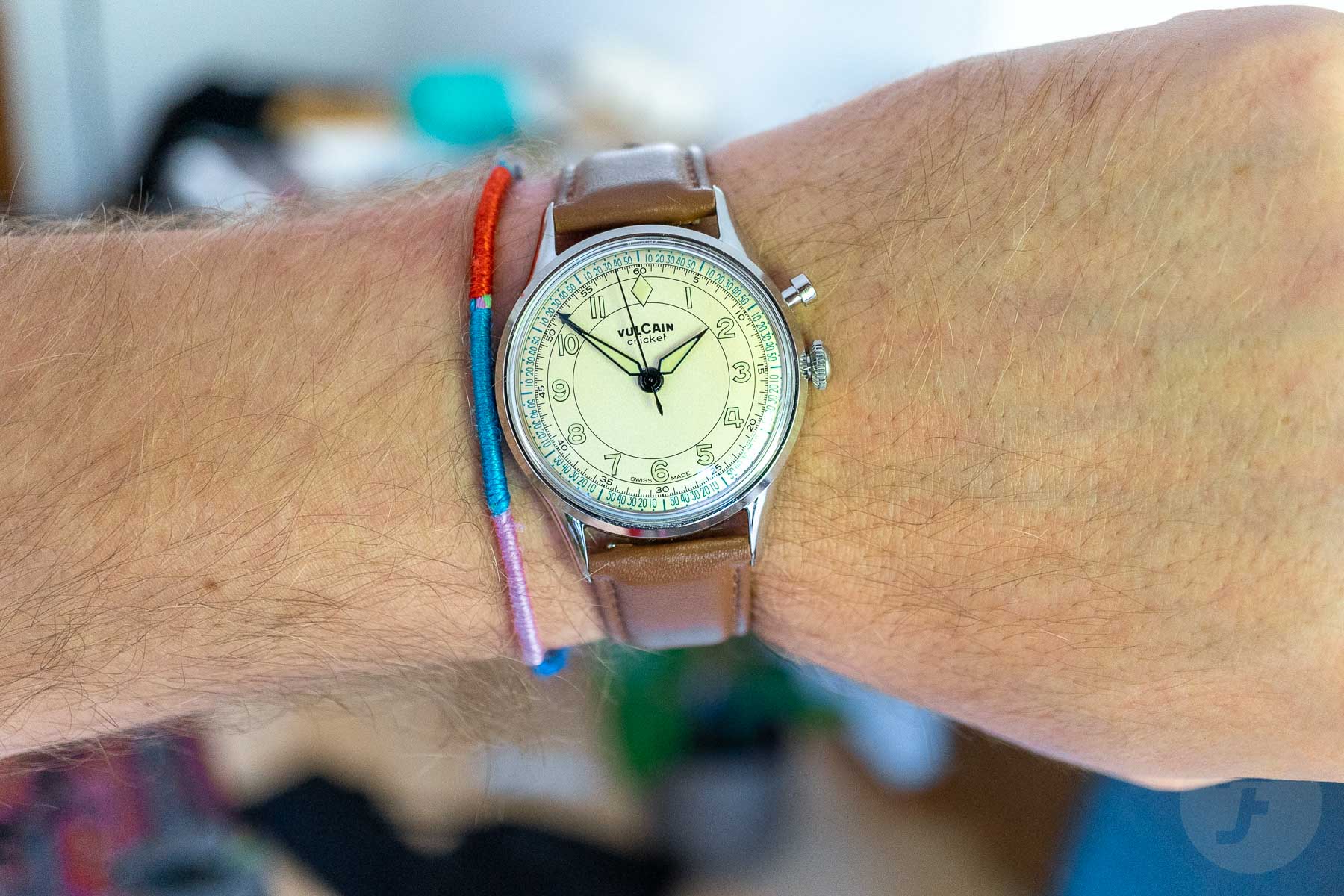 Thanks to its thickness of less than 13mm, the watch feels incredibly comfortable on the wrist. Though it’s such a small detail, I loved the steel Vulcain buckle on the strap. The one thing you might find odd is that the alarm is not as loud on the wrist as it is on the table. A human wrist does not resonate the same way that wood does. I usually used the alarm function as a reminder during the day, but it also works perfectly well to wake you up in the morning. 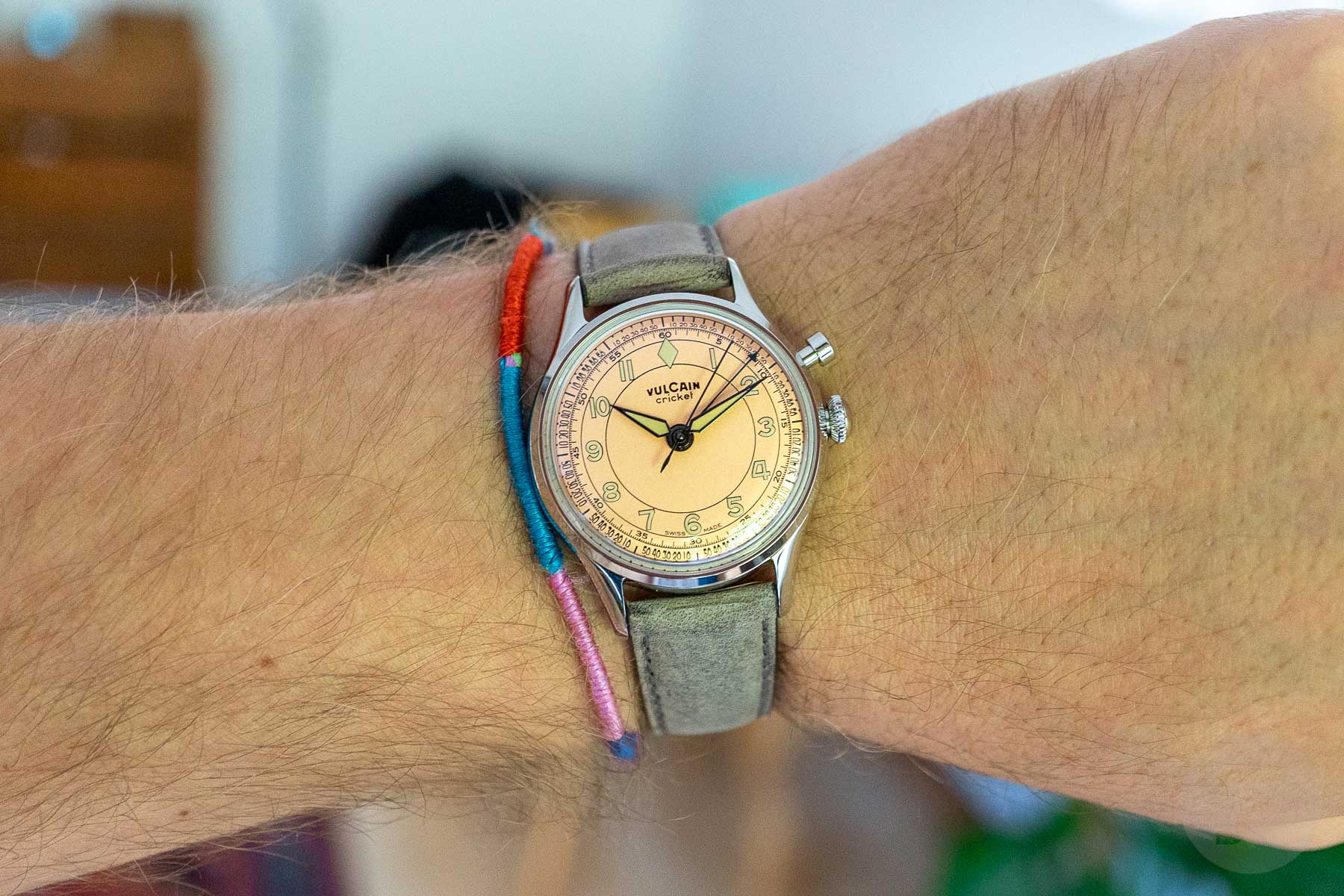 Price is a crucial point with this watch. Well, when you read “manufacture movement” in regards to any watch, you know that it will not be super affordable. Still, I feel that CHF 3,900 for the 36mm version and CHF 4,200 for the 39mm Cricket Classique is a fair price. Please keep in mind that you are buying a timepiece with an in-house movement and a particularly rare complication. If I had to choose, even though I’m an advocate of smaller vintage watches, I’d still pick the 39mm Cricket Classique, possibly with the beige dial. However, if you want one as close to the original size as possible, you’d better pick up the 36mm variant. Either way, I’m sure you won’t be disappointed.

You can pre-order your new Cricket Classique or Tradition through the official Vulcain website. The first batch of 100 pieces across all colors is slated for December delivery, but at the time of publication, all orders for that have been filled. Pre-orders from now are scheduled for delivery before March 2023.

What do you think of these new Cricket models from Vulcain? Let us know in the comments section below.