A watch signed by the Brazilian champion right on the dial
Tomas Rosputinsky
comments ...
Share

The young Czech brand Bohematic has had a lot going on this year. To appeal to a more worldwide clientele, the guys behind the brand decided to change the name to Robot. And to get some attention, they partnered with the legendary Formula One driver and launched the Robot Minor Emerson Fittipaldi Limited Edition.

“He is driving like Fittipaldi!” my dad used to shout when someone overtook our slow car at such a high speed that the only thing we could see was the swirling dust. I was little, and I could barely pronounce Fittipaldi. My father, however, was just three years younger than him. After I did some math, I realized that when I heard my dad shout his name, Fittipaldi had already retired from F1. Clearly, he had left an impression on my old man. I never watched Fittipaldi race in real time, but my very lively early childhood memories positioned him as one of the best drivers ever. 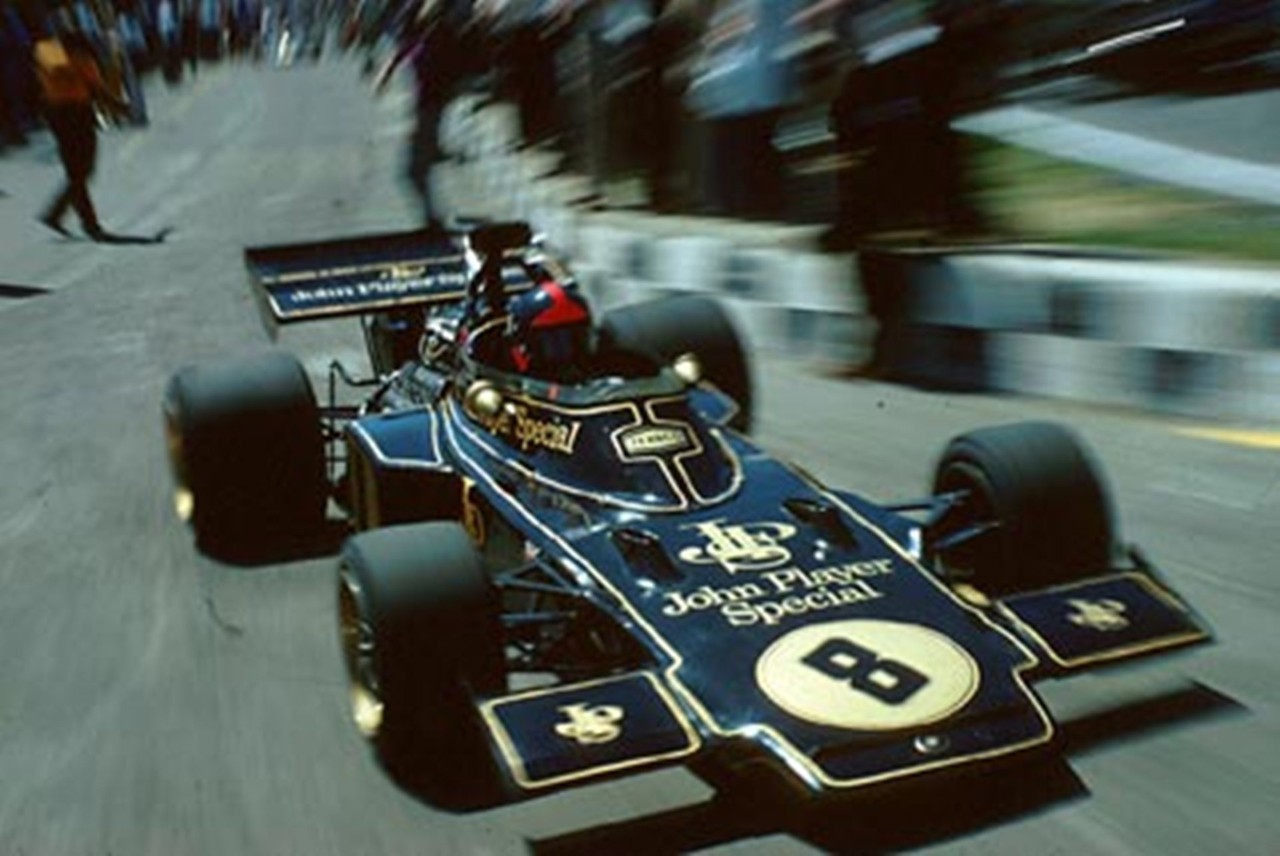 When my brothers and I started watching tight F1 races, Mika Häkkinen and Michael Schumacher were dominating the circuits. I read all the news published during their rivalry, and I couldn’t wait until the next Grand Prix. At that time, Emerson Fittipaldi still held the record as the youngest F1 world champion. When he won his first championship in 1972, he was 25 years and 273 days old. Neither Häkkinen nor Schumacher broke this one. He remained undefeated until 2005 when Fernando Alonso won his first championship, aged 24 years and 57 days. Fittipaldi added another title in 1972 and “secured” it with another two Indianapolis 500 titles later on. 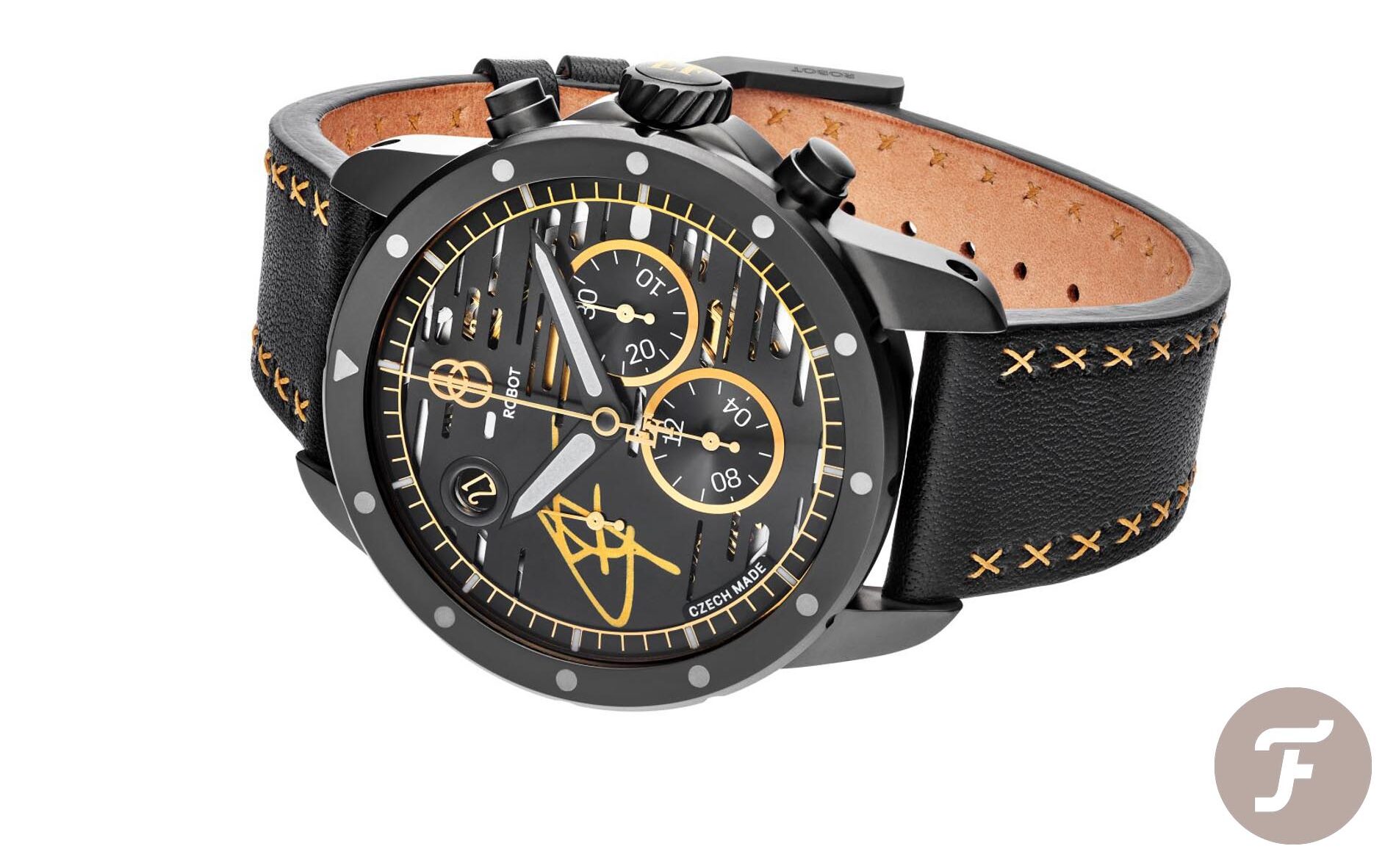 Celebrating with a limited-edition watch

This year, Emerson Fittipaldi celebrates the 50th anniversary of his first F1 championship victory. When the young Czech brand approached him with its flagship model that I reviewed here, he said suggested doing “Fittipaldi’s take” on it.

The Robot Minor itself has a beautiful story behind it. In 1949, an unknown Czech car called the Aero Minor Sport shocked the world’s best racers. It came in second place at the 24 Hours of Le Mans race, right behind the winning 12-cylinder Ferrari. Only two prototypes of the Aero Minor were ever made, and Robot’s founder Josef Zajicek and his friends managed to restore one of them. They even took it to Le Mans again… 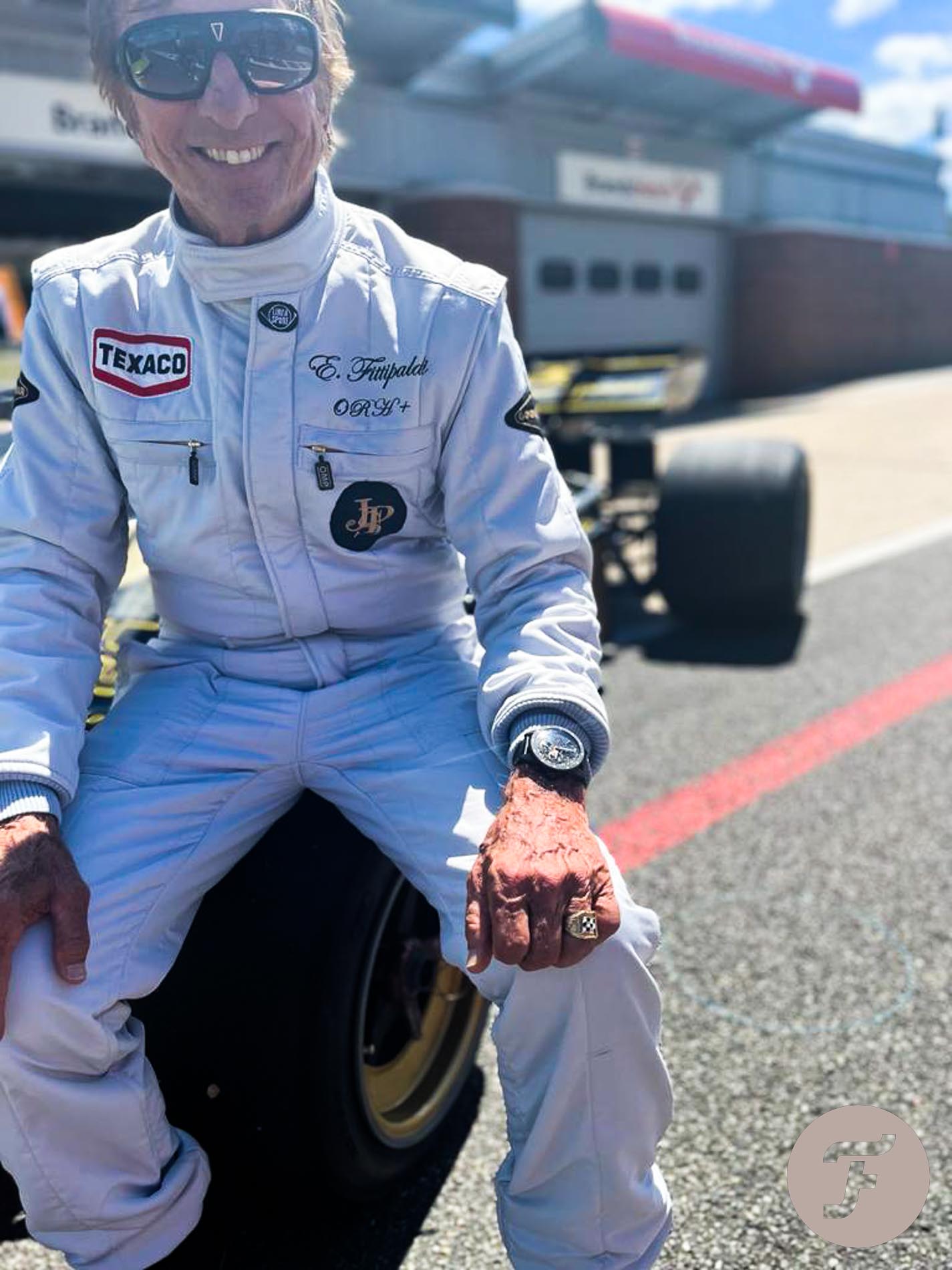 The Brazilian racing legend participated actively in the design of this attractive black and gold edition, which is a strong reference to the colors of Fittipaldi’s Lotus car in the livery of John Player Special, the team’s title sponsor. It’s clearly a Robot Minor, but it is quite far from the “stock” design, and that’s a great thing. Those who know Fittipaldi and his car would be surprised by how perfectly balanced the black and gold details are.

When I met Josef Zajicek for the first time and he handed me the Robot Minor Fittipalidi 005/100, I hadn’t seen it before, and I had no other details. I opted not to have an opinion beforehand. My eyes instantly landed on the small seconds hand with no track to point to. It was placed right in the middle of what looked like Fittipaldi’s signature. 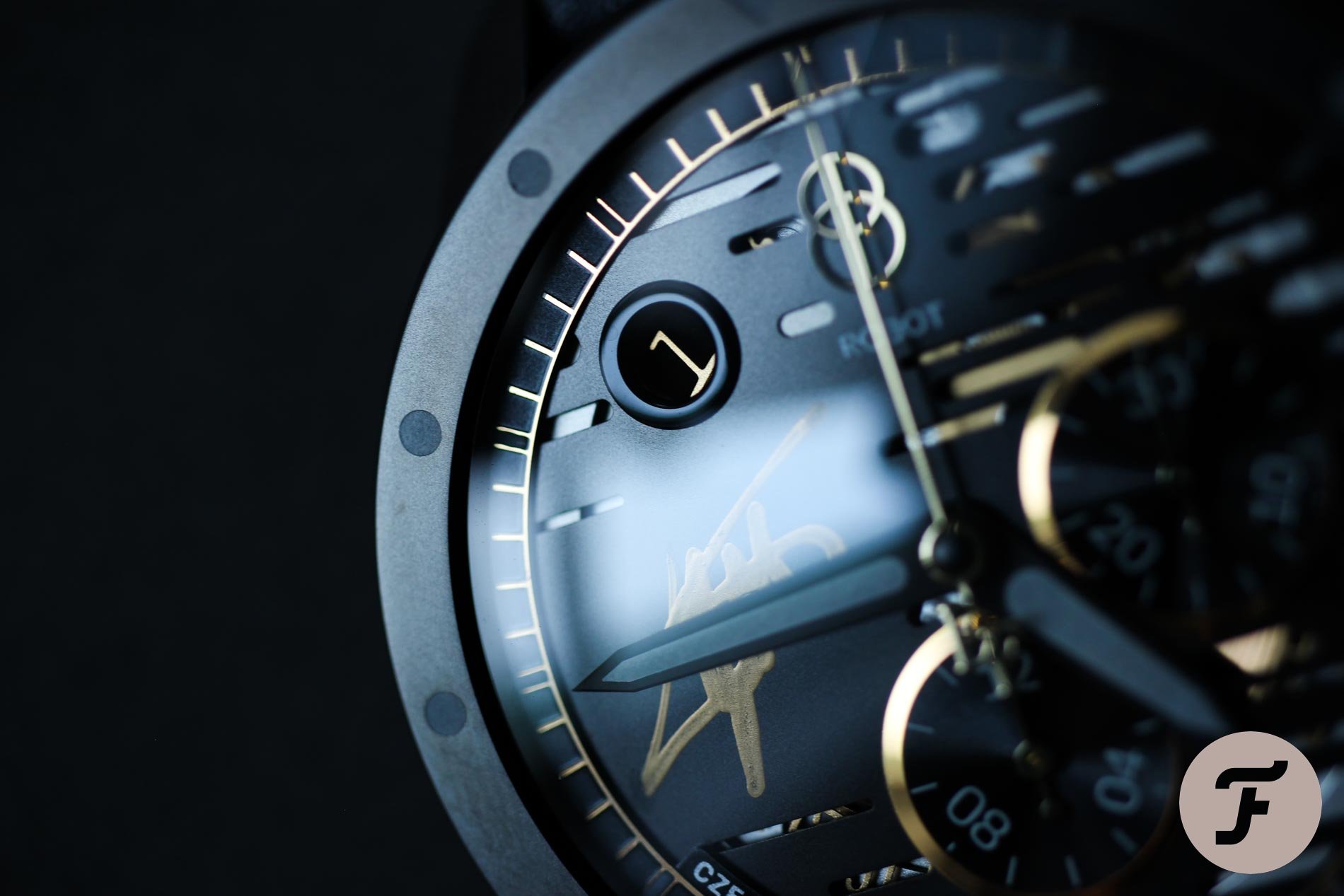 I used to collect a lot of stuff as a kid. Cards and autographs of famous hockey players were “my thing” too. So when I looked at the dial and saw that rich plastic structure that only oil paints leaves, I knew exactly what it meant. “It’s hand-signed, isn’t it?” I asked Mr. Zajicek, who just smiled back.

The 44mm case is still made of sandblasted Grade 5 titanium, and the bidirectional bezel didn’t change much either; both have just turned black. I have to say that I didn’t notice how sharp the tips of the lugs were before. I’m not sure if it’s good or bad, but it’s different. I am afraid that strong knocks may leave some visible marks on it, but I preferred not to find out. And not only because of its price tag, which sits slightly above €5,500. New owners can reserve specific numbers if still available. And with a mind-soothing warranty of eight years in total, the lugs should not be an issue at all. 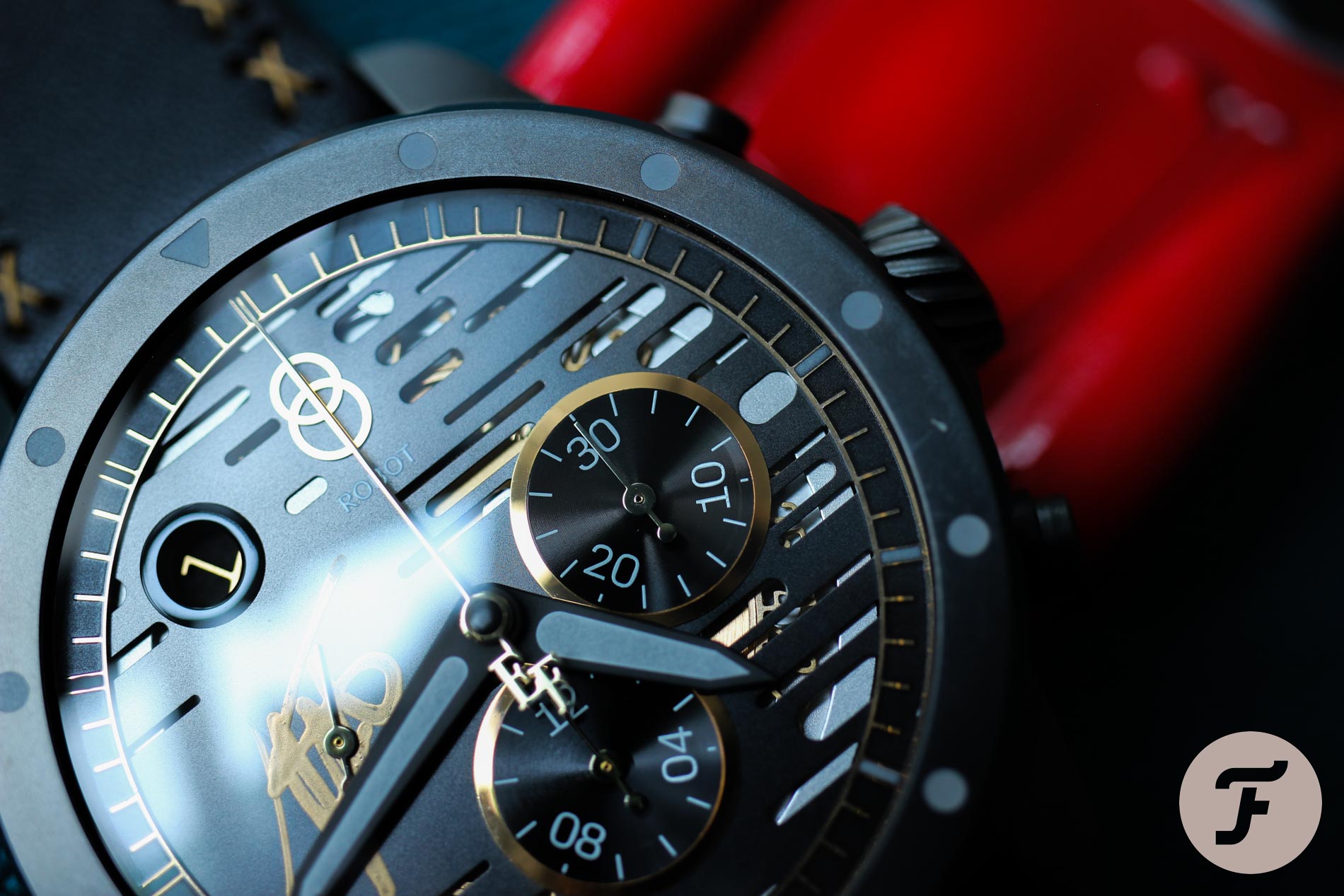 One of the most impressive features of the standard Minor model was the mesh dial structure, which was a direct inspiration from the 1949 Aero Minor prototype car. The weather during the 24 Hours of Le Mans was so hot that drivers had to drill holes into their cars’ bodies to help with cooling. Fittipaldi’s LE forgoes the mesh but keeps the perforations alive. Longer and thinner cuts alternate with shorter and wider ones, creating quite a dynamic structure akin to a speeding formula car. And in fact, they expose the movement even more than the original Robot Minor. 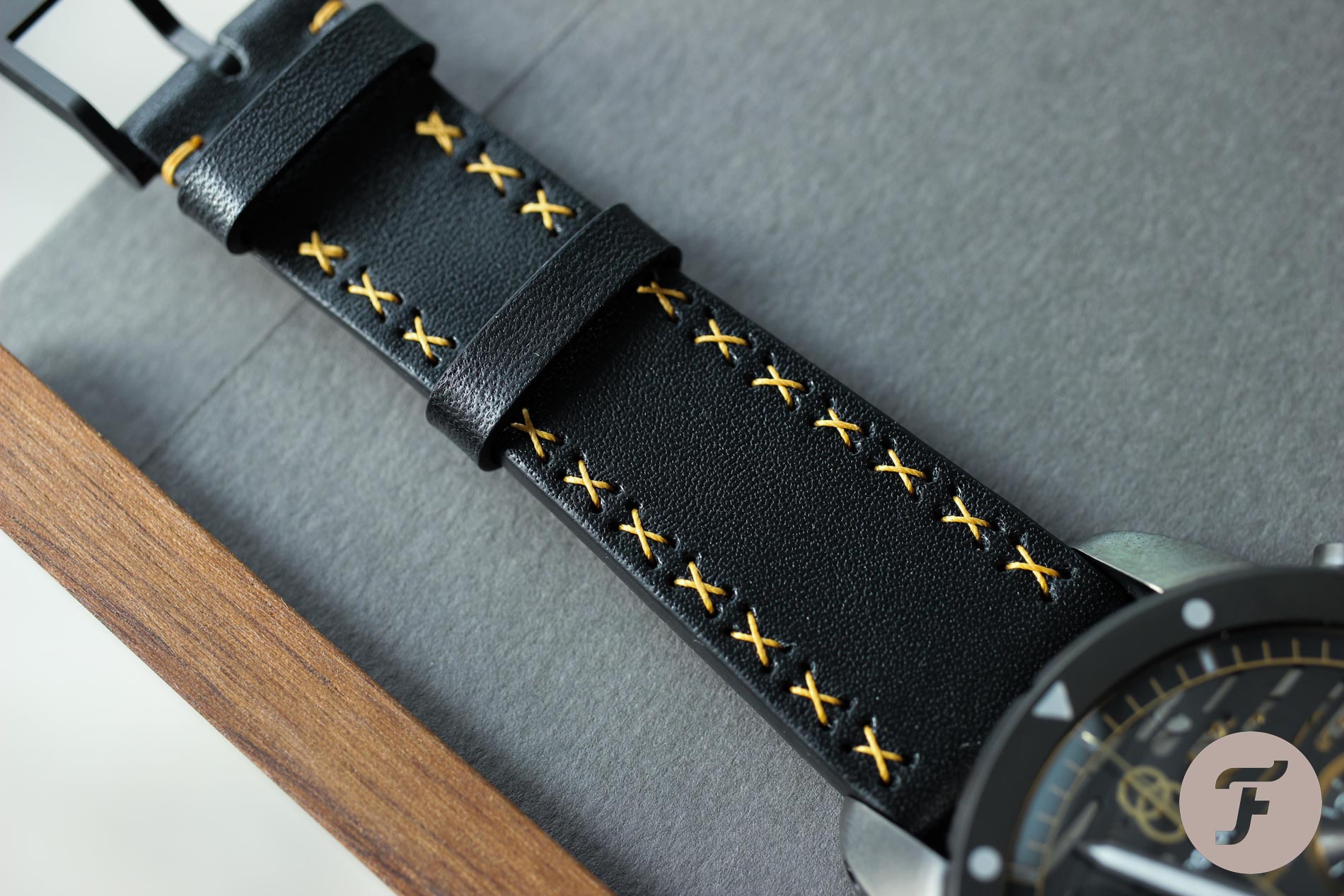 Although my Cartier Santos gave me its best shot, I never learned to like bimetallic watches. With the Robot Minor Fittipaldi, however, I realized that gold over black is an entirely different story than gold over steel. To my eyes, when steel and gold are used together, it appears as though they’re constantly fighting. While I have no fresh memory of other gold-over-black watches, here, gold doesn’t undermine the black dial. Rather, it awakens it and gives it more life.

The gold minute track, the thick frames on the sub-dials, and the date (which I already named one of the best date implementations) are my favorite details on the dial. The black and gold scheme continues on the hand-sewn black leather strap with decorative stitching in gold thread. I swear I would hate it if I saw it in a picture, but I swear I liked it after I saw it in the flesh. I found it flashy and little bit kitsch, but it looks interesting in reality. Furthermore, the cross-stitching shows admirable quality and precision. 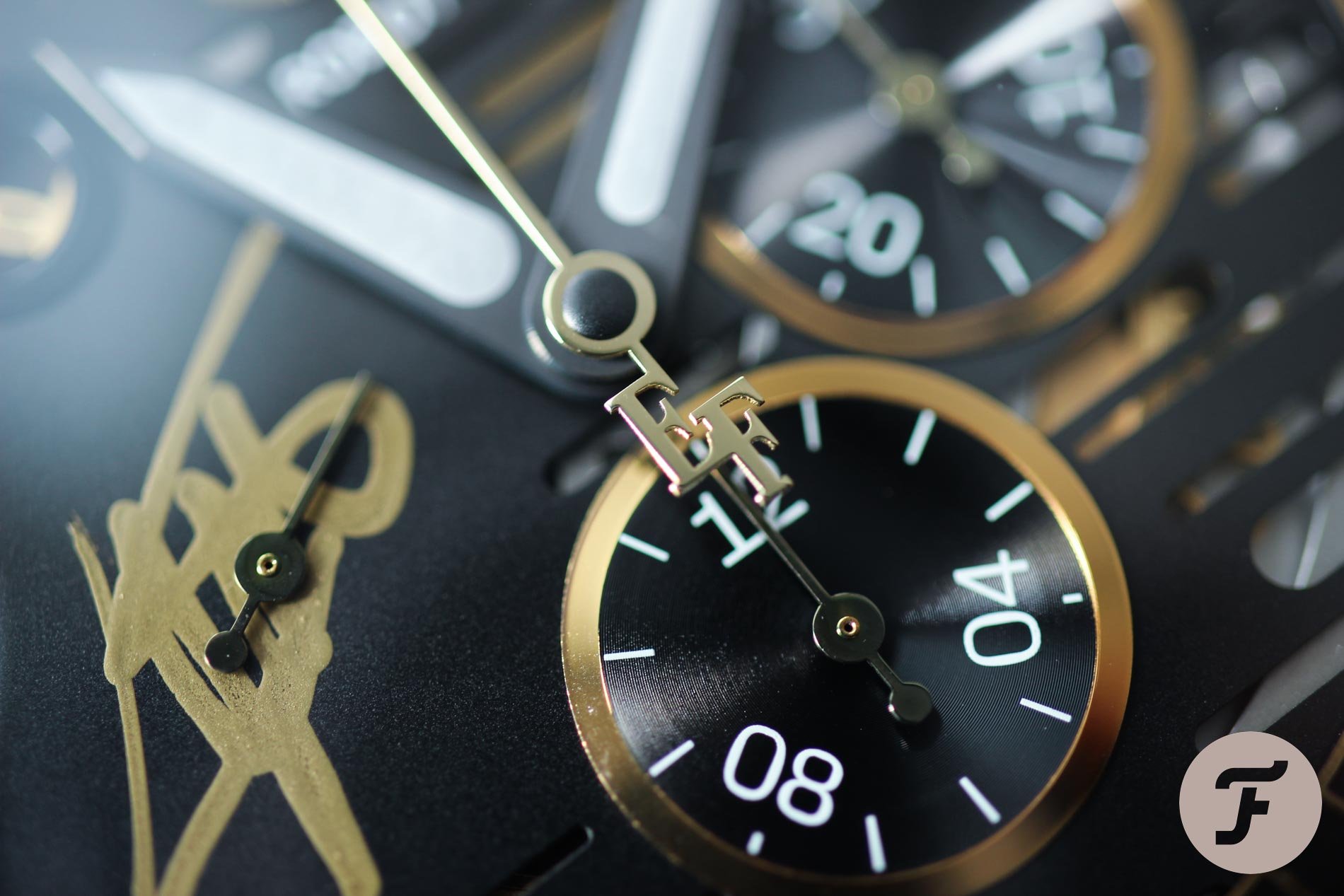 When I first saw Fittipaldi’s John Player Special formula car in pictures, I thought I was dreaming. It looked like a card taken from a poker deck. It was so daring and so confident that I found it to be a mockery of fate. The watch designers did not forget the “Gatsby” JPS initials and included a nod to them too. The font of the monogram “EF” on the chronograph seconds hand’s counterbalance echoes the characteristic serif typeface. The EF initials moving around are magical in a way, even when they’re upside down — almost like a reminder that even the best drivers sometimes roll over… 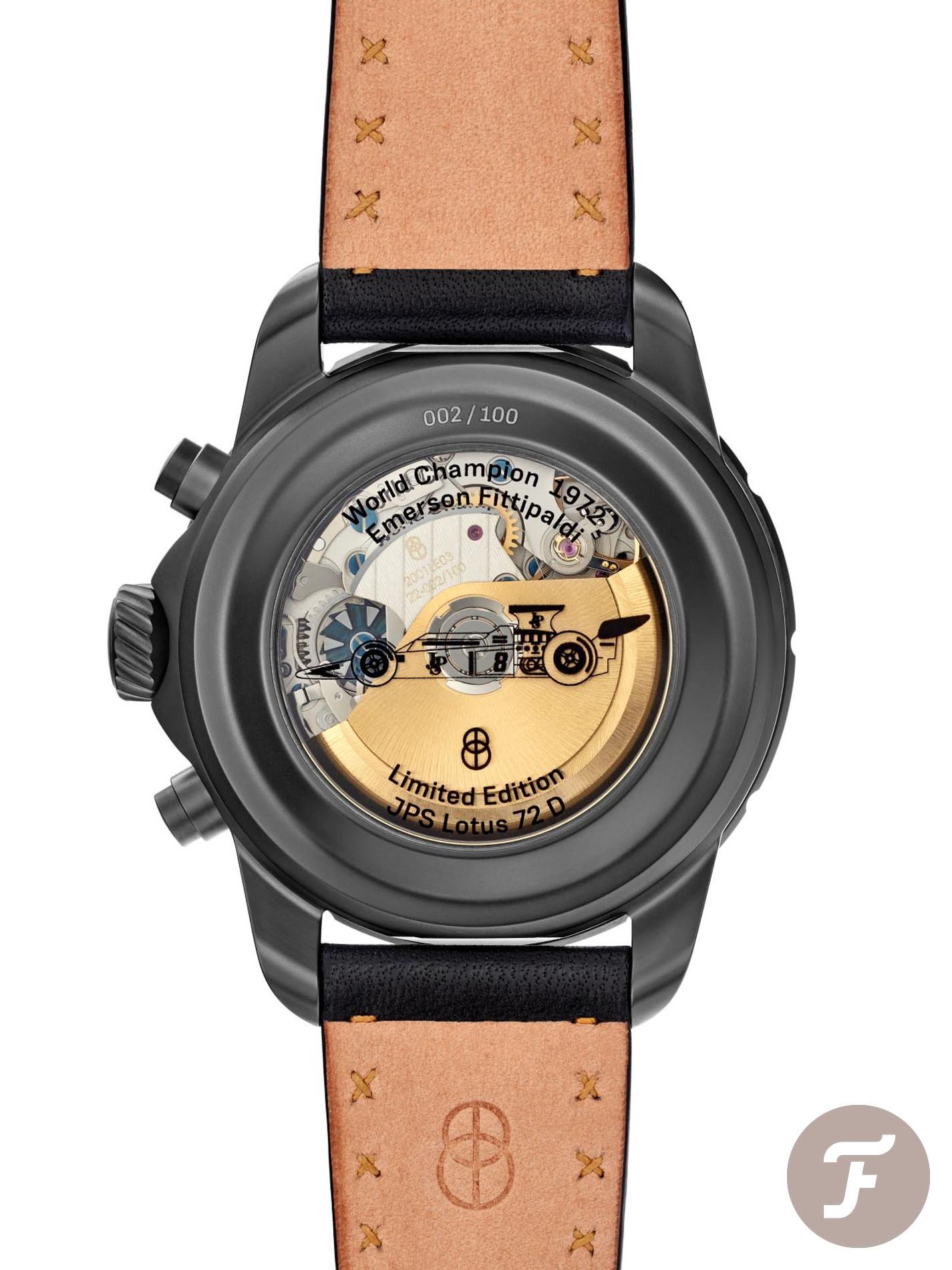 If you turn the watch around, you will find the silhouette of the Lotus car and an inscription commemorating its overall victory in the championship in 1972 on the sapphire case back. You can also see a bit more of the La Joux-Perret 8120 movement, which features a column wheel and 55 hours of power reserve. Unfortunately, the guys from Robot haven’t addressed my original issue with the bottom pusher, which requires way more pressure than the top one. Maybe they think that if you wear a 44mm sports watch, you should also be strong enough to press the pusher.

The Robot Minor Emerson Fittipaldi Limited Edition is definitely a watch with a sharp attitude (not only lug tips), and it sends a strong message. It’s massive, it’s sporty, and it stands out of the box. The brand may not be instantly recognizable, but that’s exactly what some owners like — finding and wearing something new and different. If you are more into F1 racing than the race to the Moon, the backstory of the Robot Minor watch and Fittipaldi’s hand-signed dial could be something special to consider.

The watch retails for €5,663 including VAT. For more information, check it out on Robot’s official website.