Hands On With The New Bohematic Minor Titanium Chronograph

In 1949, an unknown Czech car called the Aero Minor Sport shocked the world’s best racers. It came second at the 24 Hours Le Mans race, right behind the winning twelve-cylinder Ferrari. Meet the Bohematic Minor, a titanium-cased chronograph with an unusual mesh dial that pays tribute to this successful race car.

It’s a fascinating story. Only two prototypes of the racing car Aero Minor were ever made and both raced the same 24 Hours Le Mans race. Out of 60 racing cars, only 19 made it to the finish line, including both the Aero Minor cars. Not only did the Czech drivers Krattner and Sutnar come in second after the Ferrari, but their average speed of 99.664 km/h was also the absolute best performance in their class. 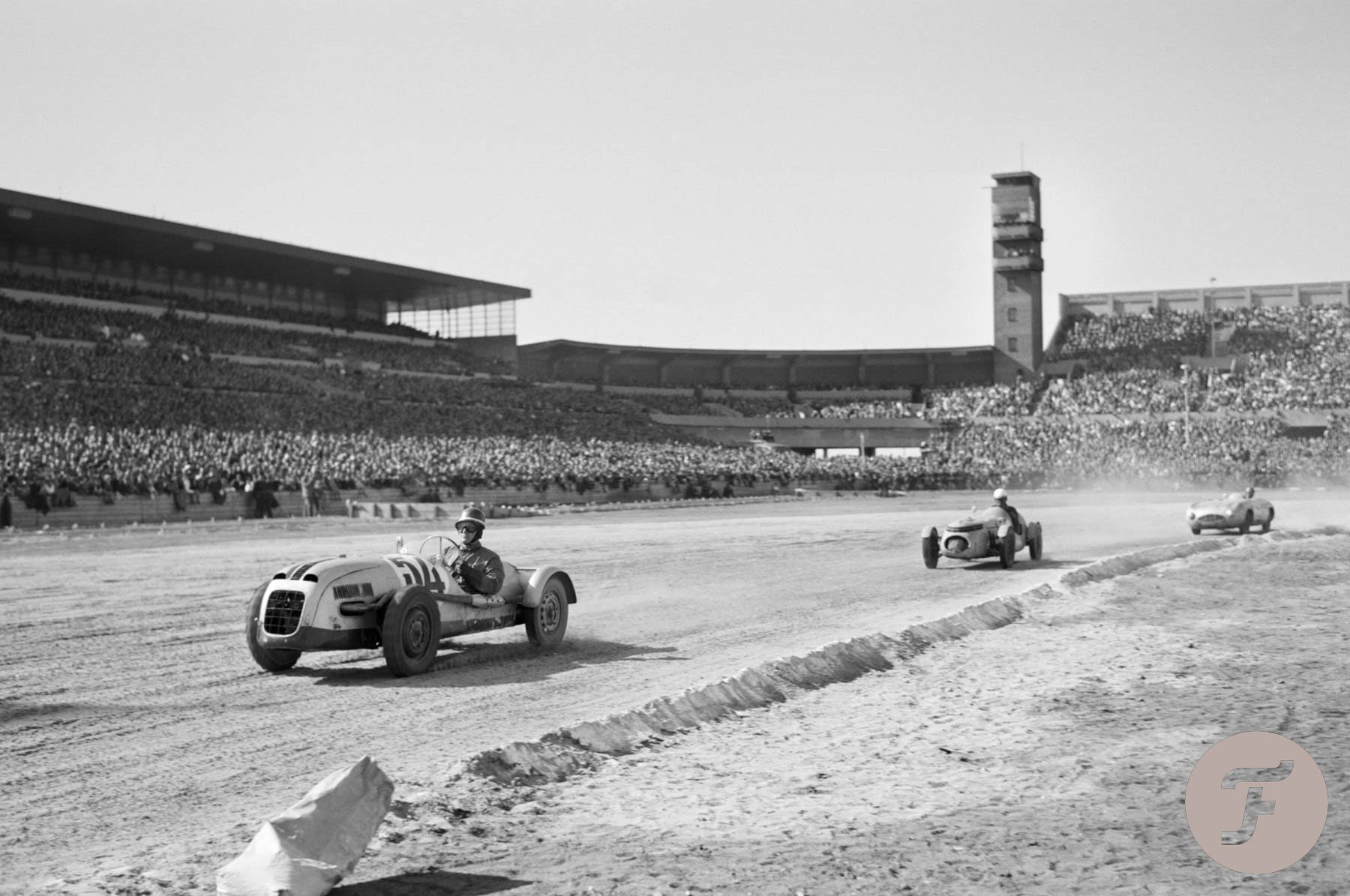 Interestingly enough, due to technical problems on the way to the race, the Czechs almost missed the race registration. The story goes that the organizers didn’t even expect them to finish the race, so they allowed them to compete. The final second place for the Aero Minor Sport car donning the number 58 was a spectacular result for Czech motorsport. Both drivers got a reward of 500,000 Swiss Francs, which they put into Swiss banks on their way home. Instead of a warm welcome, the Communists kept their success a secret. The drivers were not even allowed to participate in next year’s Le Mans. Since they refused to support the party, they were subsequently accused of treason and imprisoned for 11 and 15 years respectively. 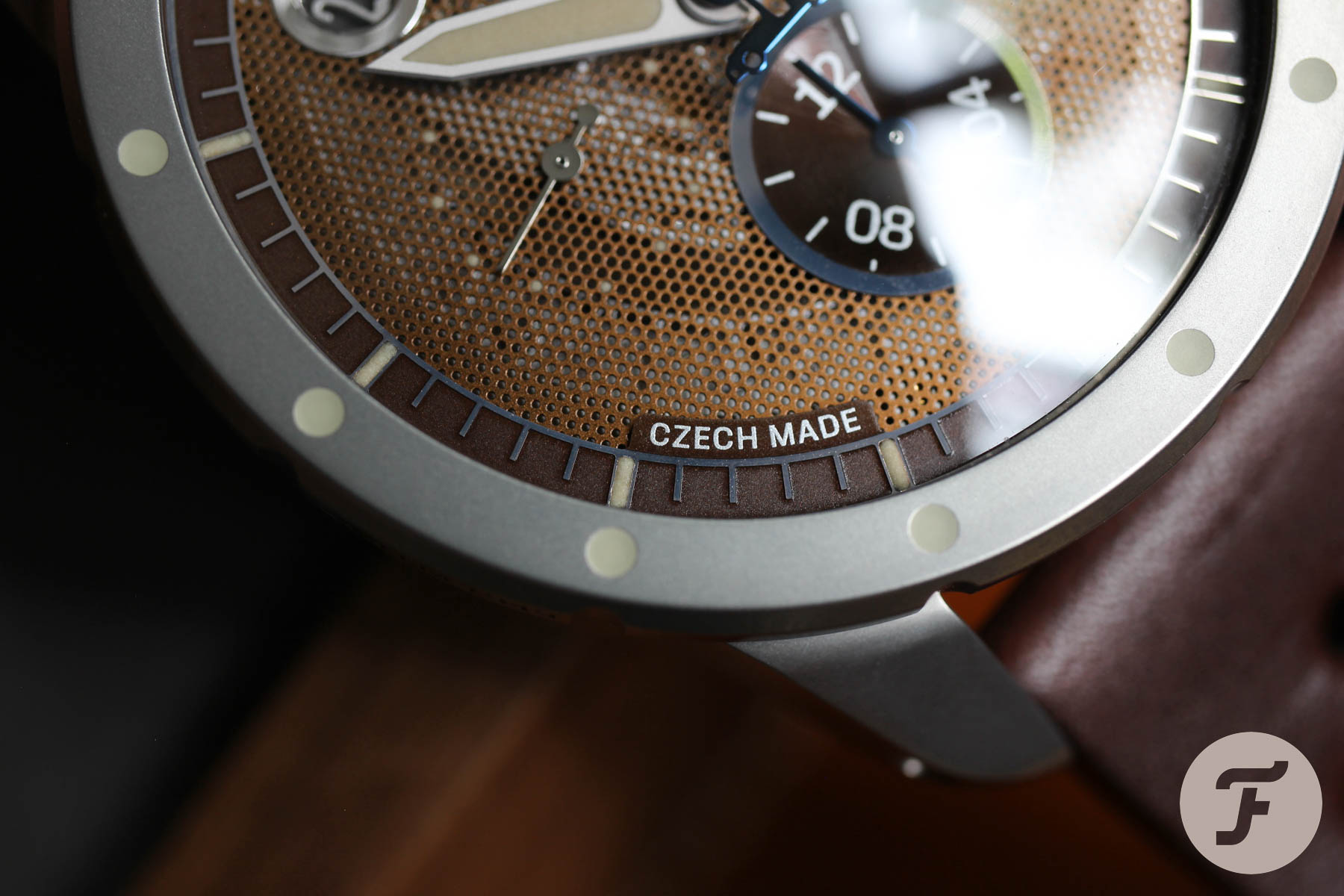 Putting the Czech Republic on the watch map

The same year that the Aero Minor Sport participated in Le Mans, the Czechoslovak government decided to build its own watch manufacture. That’s how Prim was born. At that time, only seven countries in the world produced watches — Switzerland, Germany, the US, France, Great Britain, the Soviet Union, and Japan. Deciding to build a watch factory in the middle of nowhere in Czechoslovakia and without any watchmaking heritage was pretty crazy. Yet by the 1970s, Prim was producing half a million watches and clocks annually. No surprises then that there are still is a lot of skilled watchmakers in the Czech Republic today. 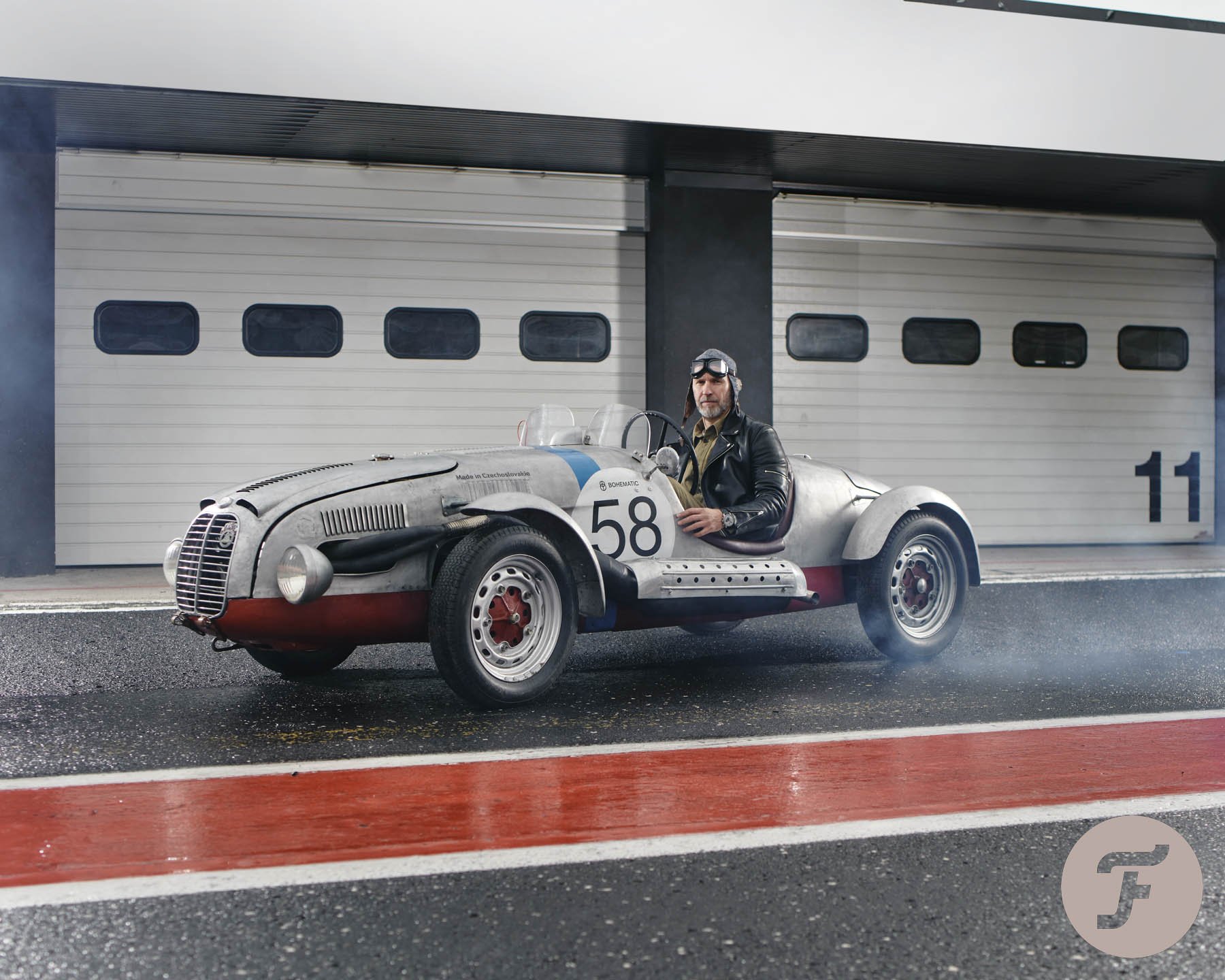 Bohematic as an act of passion

Back to the Aero Minor Sport. While one of the racing prototypes ended abroad, the second one remained in the Czech Republic. In 2018, Josef Zajicek, Michal Fronek, and Jan Nemecek acquired the original Aero Minor Sport car, renovated it, and returned it to the racing circuit. The ultimate goal of these three enthusiasts is for the vehicle to participate in the Le Mans Classic race. All three of them are successful in their businesses. And all of them are watch lovers. It didn’t take long for them to create independent manufacture called Bohematic. Their first watch creation is nothing other than a Minor inspired chronograph. 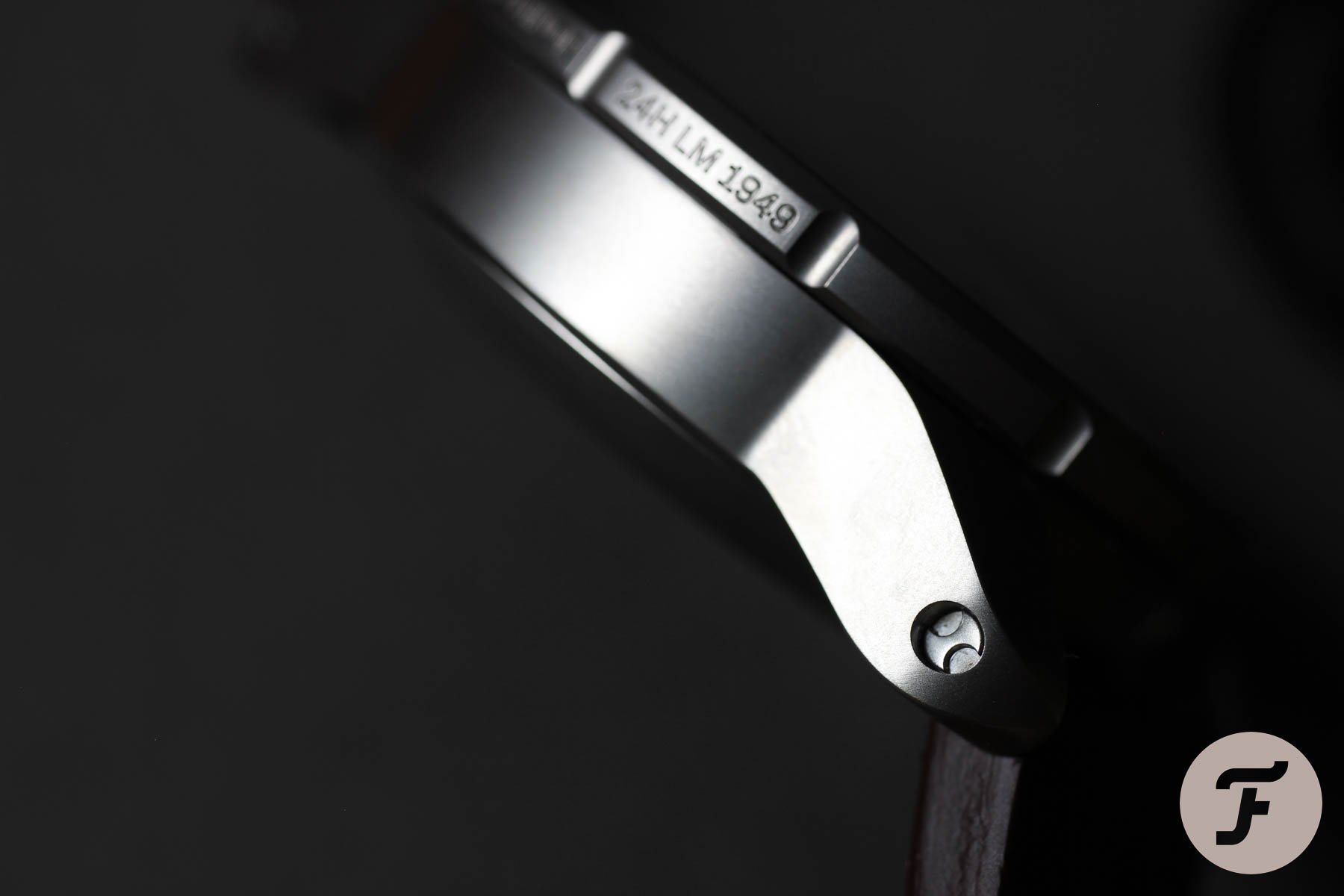 The 1949 Aero Minor Sport car was powered by a straight-twin 744cc engine. Its duralumin cigar-shaped body could reach 28 hp at 4,500 rpm. With a full 50 liter tank of petrol that was placed behind the driver’s seat, it weighs only 455 kilograms. No surprise then that the Bohematic is not made of steel, but of durable and lightweight sandblasted titanium. Mr. Zajicek and Mr. Fronek have years of experience in watch design and the final case shape, including the special screws instead of springbars are an in-house design. The 44mm diameter is not exactly my size, but if you prefer a big window view, you have a lot to admire.

Dial as a secret

The most eye-catching detail is the mesh-structured skeletonized dial in sunburnt tones. It also represents the strongest reference to the race car story. The weather during the 24 Hours Le Mans was so hot, that the Aero Minor drivers had to drill holes into the car body and brakes shortly before the race to help the cooling. There are 2,300 holes drilled into the dial, although there were not so many in reality. The biggest ones are concentrated towards the center with the thinnest around the edge. When I asked the guys at Bohematic where and how they produce it, they were pretty hesitant to reveal any information. All they said was that it was a painful process to get to the final result.

If I were forced to name a problem with standard chronograph designs, I would say it’s the fact that the small second has the same layout as chronograph counters. The Bohematic Minor comes with a witty solution that distinguishes the small seconds sub-dial from the chronograph recorders. The designers smartly utilized the dial’s mesh structure. By injecting luminous material directly into the twelve mesh holes, the Bohematic achieved an original, airy sub-seconds track that is both there and not there. If only it had a stronger glow in the dark, it would be perfect. It definitely helps to read the chronograph faster. 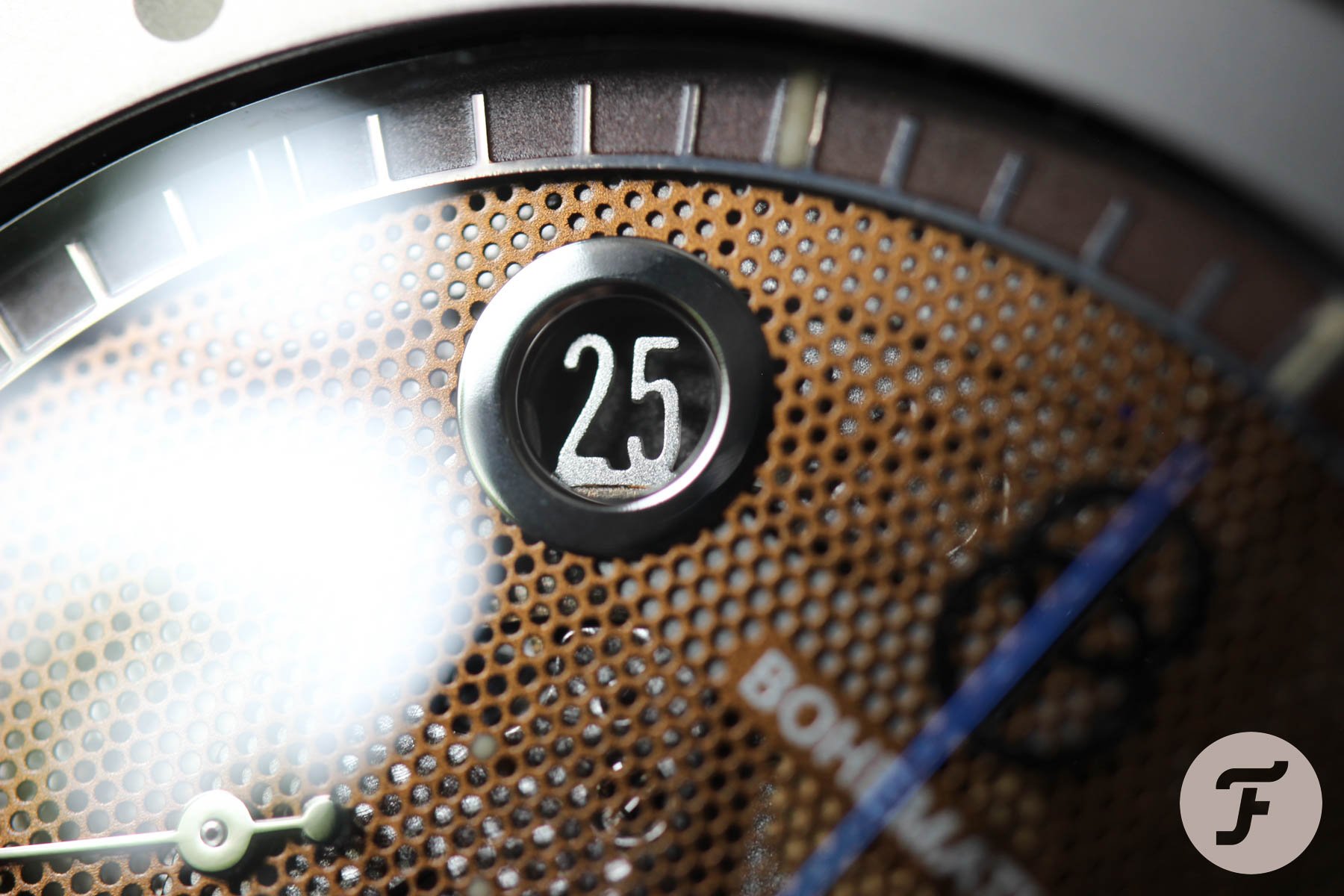 The best date in a long time

The mesh dial is one step lower than the framing minute track. No over-creativity there, just a bit of spice with good old luminous hour indexes. Forget printed dials, as Bohematic used galvanic plating for minute ring finishing. The frame rings around the chronograph recorders and date window are highly polished and look sharp around the edges. I’ll tell you, the Bohematic guys paid some real attention to the date. Look at the macro shots and you will notice the real depth and plasticity of the displayed numbers. How come? I didn’t notice it at first. The date ring is not printed, each single number is laser cut and “welded” onto the hardly visible base ring. A very thoughtful and nicely executed detail.

I chose the sunburst dial in favor of the blue, black, or white dial, as it is the only version that comes with a warm aged-toned lume. The sunburst reflects amazingly in the sun, casting tones from gold yellow, clay orange, and brick red, to dark brown. It reminds me of an old car chassis that blossoms with rust. Honestly, that would be my first and only choice for the Bohematic Minor. 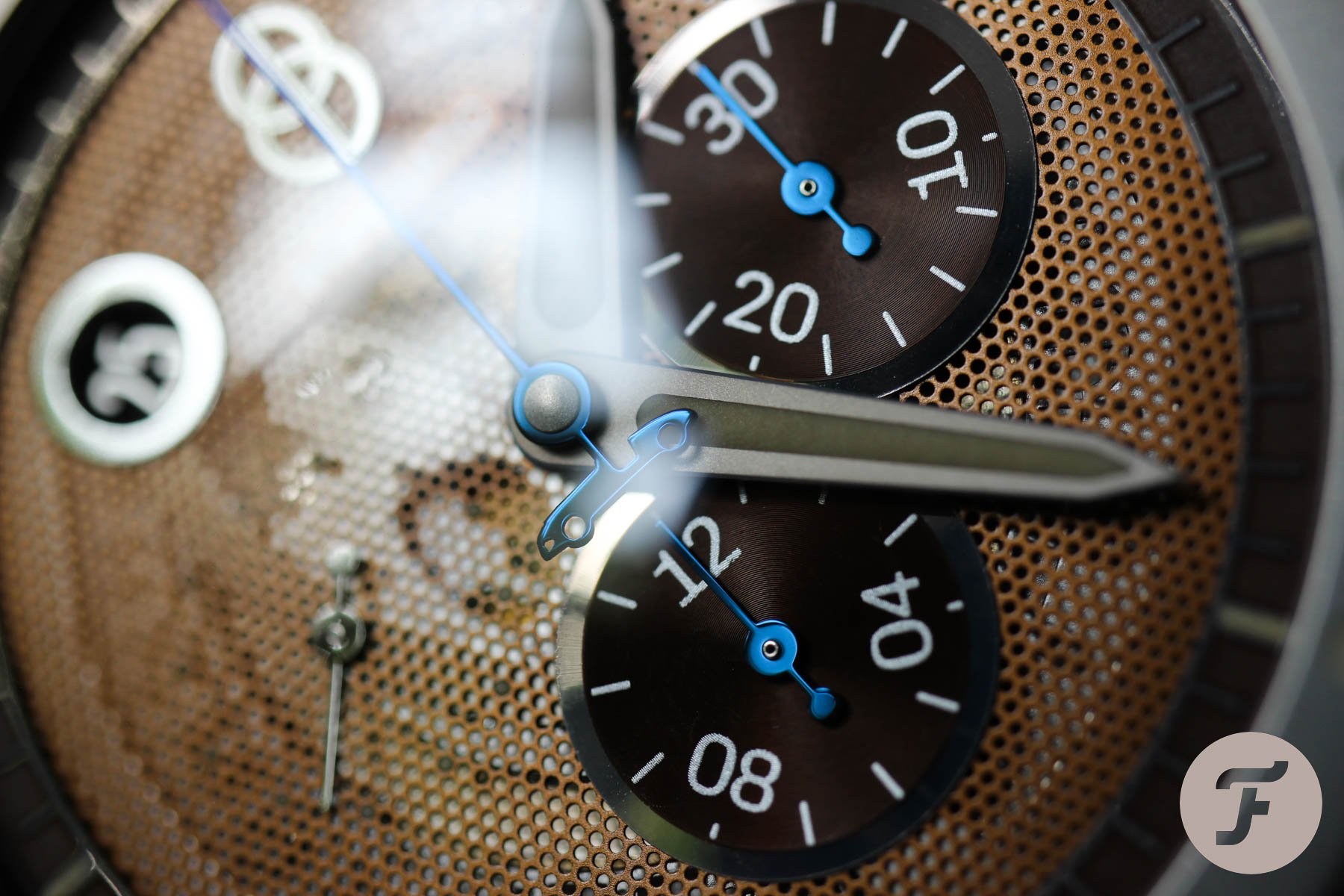 If you turn the Bohematic Minor around, you will immediately realize that the founders are designers. They left the case back as clean as possible, without a single word printed or engraved. You can thus fully focus on the movement through the transparent sapphire decorated with a silhouette of the racing Aero Minor. The Minor Aero shape is also nicely visible in the blued chronograph’s central second counterbalance. The shape of the original car’s wheel is embodied in the blued rotor on the La Joux-Perret movement with a 55 hours power reserve. It’s quite an unusual movement choice compared to a standardized ETA or Sellita. Well, at the end of the day, any details that go toward justifying the €5,700 price tag count.

I already mentioned that the 44mm diameter is not my jam. I took the Bohematic Minor for a review anyway, mostly out of curiosity to see the difference between pictures and reality. A few minutes were enough to see the level of attention that went into the details. And yet I haven’t mentioned the retro pump-pushers or the predatory-looking crown. The crown is actually another car reference, this time to the transmission gears. While the crown is fun and feels real under your fingers, the chronograph left me a bit uneasy. Mike wrote an ode on the La Joux-Perret in Aquastar, and so did I in its integration in the Hanhart.

The upper button operates easily, and both the start and stop are recognizable only by the sound of a click. Yet the lower pusher needs precise and incomparably higher pressure to be applied. If you perceive it as good protection against unwilling reset, you win. I don’t like it as it felt a bit imbalanced and reported the fact back to Bohematic. 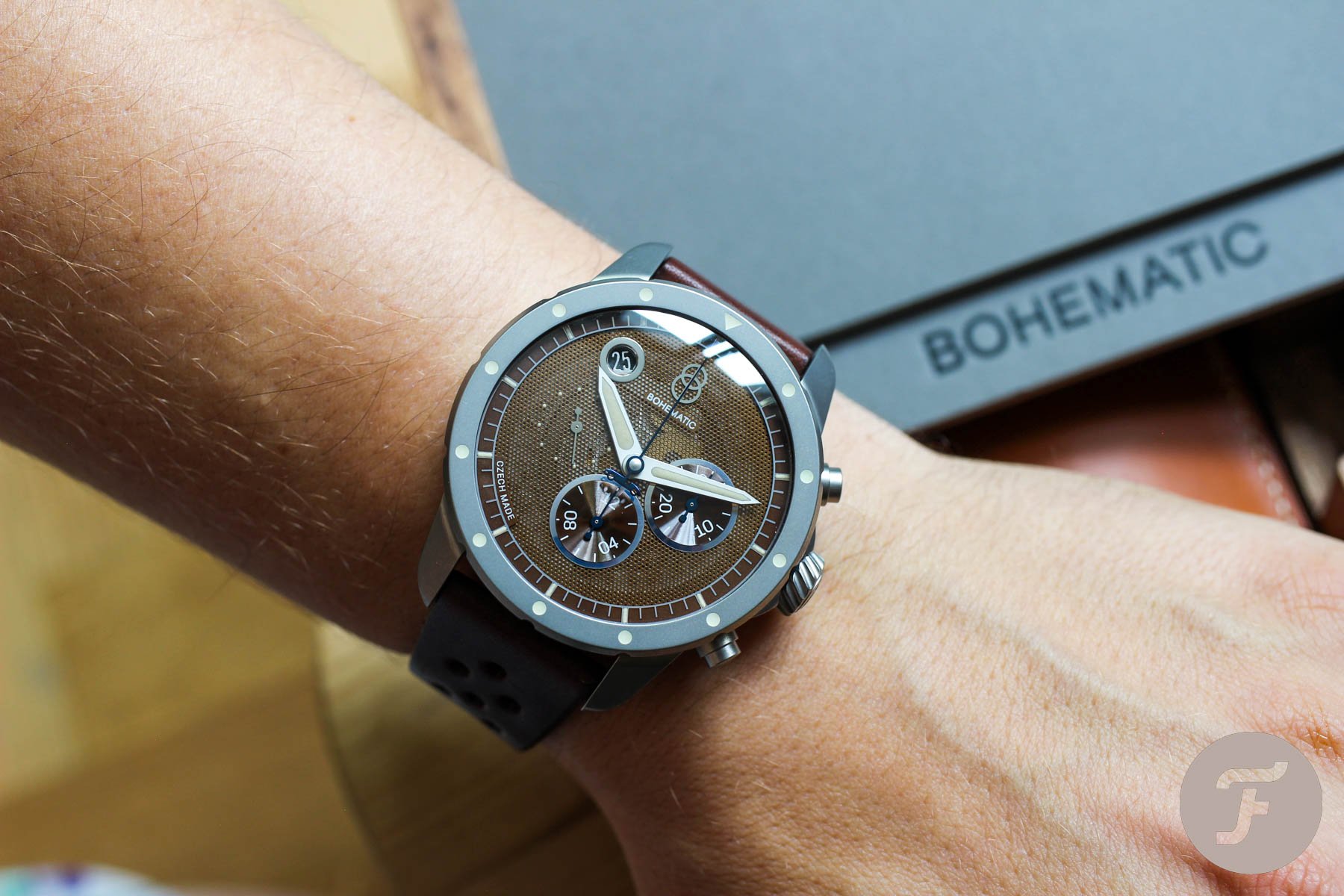 The “Czech made” tag makes me proud. I am not sure about the asymmetrical placement, but that’s something you can also see in Prim watches. We can call it a Czech signature, if you like? If I had to name the weakest point, I would say it’s the bezel. It’s bi-directional and rotates with decent muffled clicks. I don’t know if it’s the result of its thinner sizing, but it became a bit wobbly. It springs slightly to the touch from the top.

Songs of praise go to the sharply edged buckle, however. It is very individualistic. The brown leather racing style strap is made in the Czech Republic too. Also, notice its blue loop: each car at Le Mans had to be painted in national colors. That’s why the Mino Aero Sport got a striking blue stripe over the body and the loop highlights that detail.

I was instantly drawn into the Aero Minor Sport Le Mans story. I was both fascinated and moved when I learned about the attempt to save this precious piece of local car racing heritage with a global legacy. The price tag seemed slightly higher at first look, but that’s the reality when you are an independent microbrand that insists on producing its own high-quality screws. All Bohematic Minor watches will be produced as custom orders and Bohematic will even allow you to personalize them. We shall see in a few years how they are holding up. Tires crossed!