Vintage Hanhart chronographs are a solid part of many vintage watch auctions. A strong military heritage, Steve McQueen’s endorsement, and striking visuals mean they have become quite sought after. Today we will look at the two modern reinterpretations. The smaller monopusher Hanhart Mk 1 and double pusher Hanhart TwinControl.

I remember when I first learned the story behind the red chronograph pusher. The legend says that the woman painted the button with her red nail varnish so that her man would think of her always. Whether it was his wife or mistress, is not important. Is the story real? That’s the question for the marketing genius that came with it. True or not, the red button is the distinctive trademark that has characterized Hanhart since the company first introduced its chronographs in 1938. Hanhart has a rich history and Balazs summarized it nicely in one of his articles here. 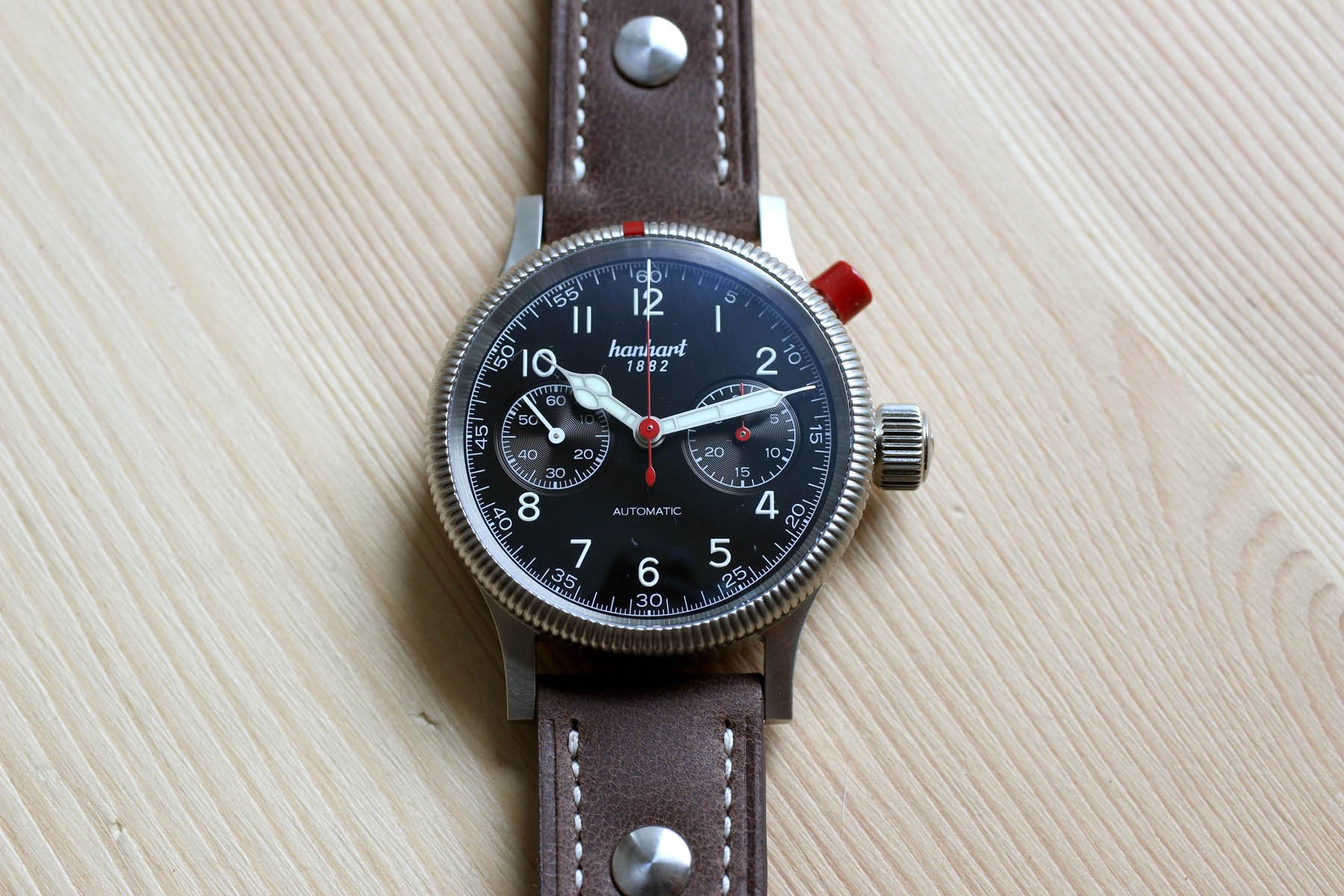 For me, the red button is one of the most beautiful and most consistent visual signatures around. So when the opportunity came to take not one but two in for review, I didn’t hesitate much. For the classicists among you, I took a smaller 40mm in diameter MK 1 with a fluted bezel. If your wrist enjoys bigger sporty watches, my second choice was the 42mm TwinControl with a flat bezel. 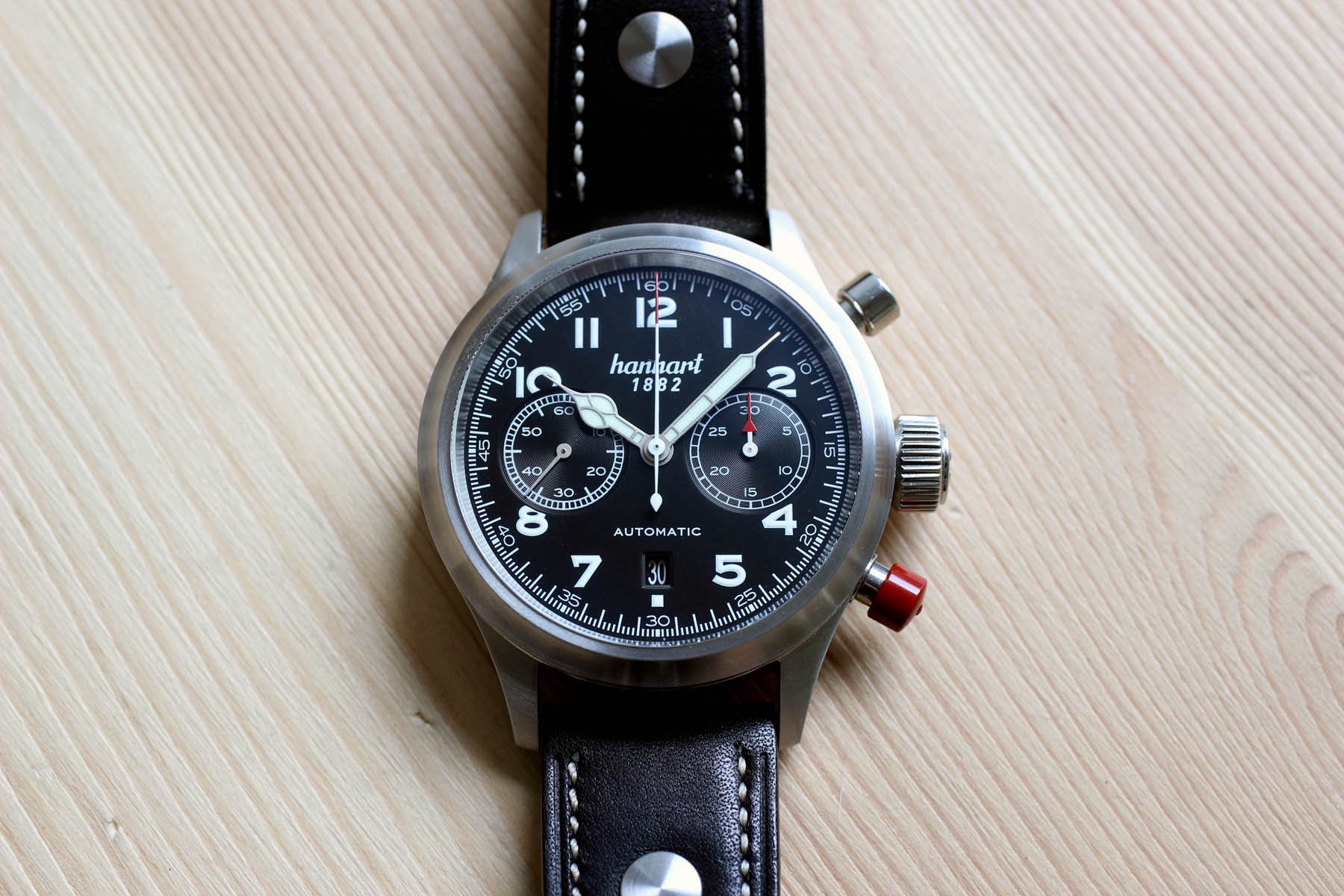 Not a typical red

First of all, to call it just a red button would cheapen its importance. When you say red, I see my daughter’s pencil-set red. The Hanhart red is very deep, looks more serious than dynamic. It reminds me of a drop of thick blood, which is very symbolic if we realize the first pilots to use these watches did so during deadly dogfights. 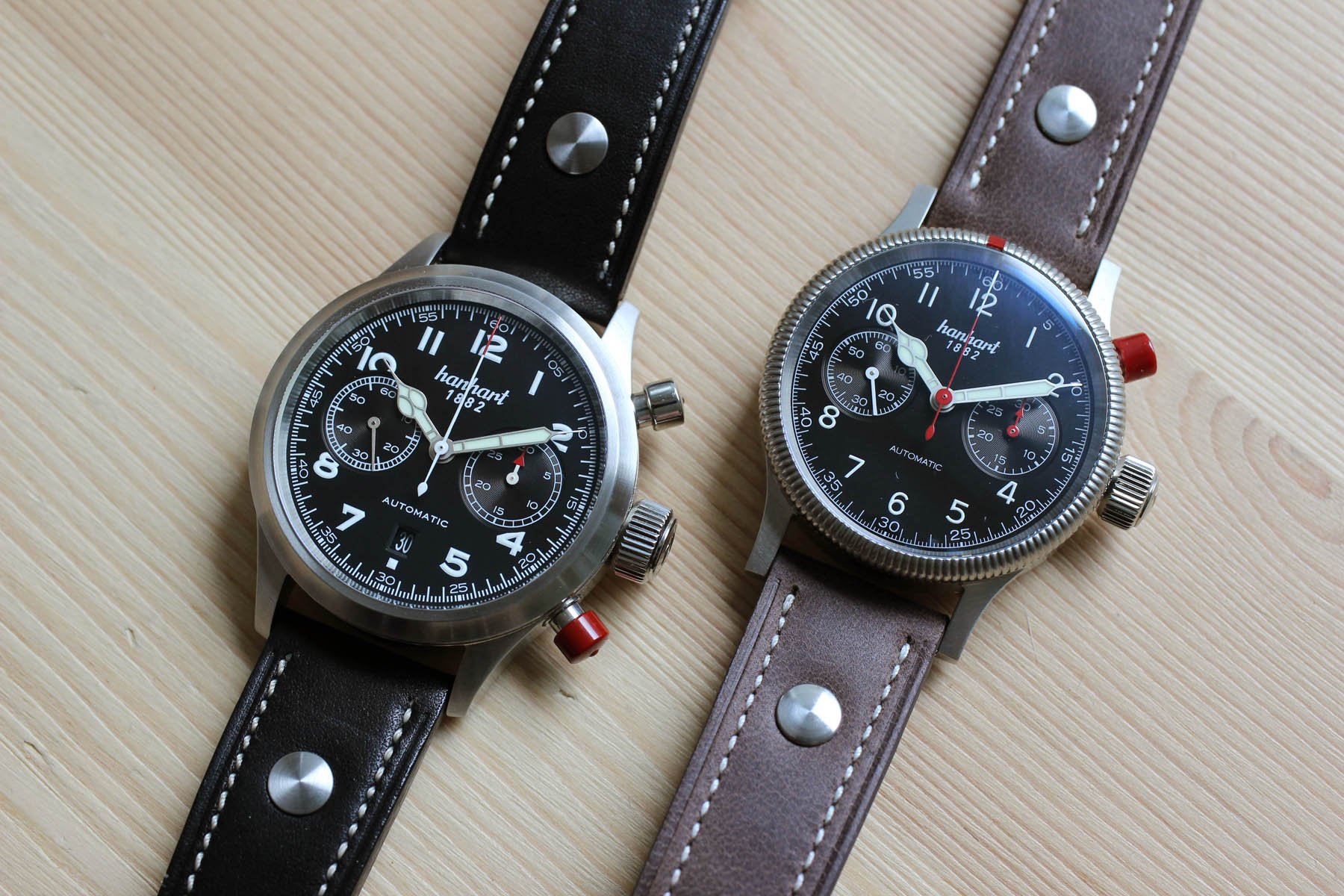 The drawback of the monopusher set-up is that the Mk 1 can‘t be restarted from the point at which it is stopped. It works in the same way as the 1938 Calibre 40 with the start, stop, and zeroing, all performed by a single button (in that sequence only).

The TwinControl, however, works like a typical chronograph with a start/stop pusher and a reset button. Both movements are ETA-based, but the TwinControl uses a La Joux-Perret module. I dare say that even unexperienced hands will feel the difference under the finger. Operating the TwinControl is smoother, gentler, and roughly half as loud. You don’t need to press so hard to engage the chronograph and stopping it running requires even less pressure.

The Hanhart TwinControl feels like shifting with a modern gearbox.

The monopusher Hanhart Mk 1 is stiffer and rougher under the finger. To give you an idea, the Mk 1 reminds me of the 1970s-1980s Porsche 915 gearbox. Often referred to as the last gearbox offering the classic Porsche experience. You need to shift strongly, but very carefully and precisely. You need to feel the mechanics. The Hanhart TwinControl feels like shifting with a modern gearbox. It’s so smooth you don’t even think about that. Well, my problem is, I would never give up on my old gearbox. As such, it’s the Mk 1 that gets my vote with its clinking and crackling pusher. 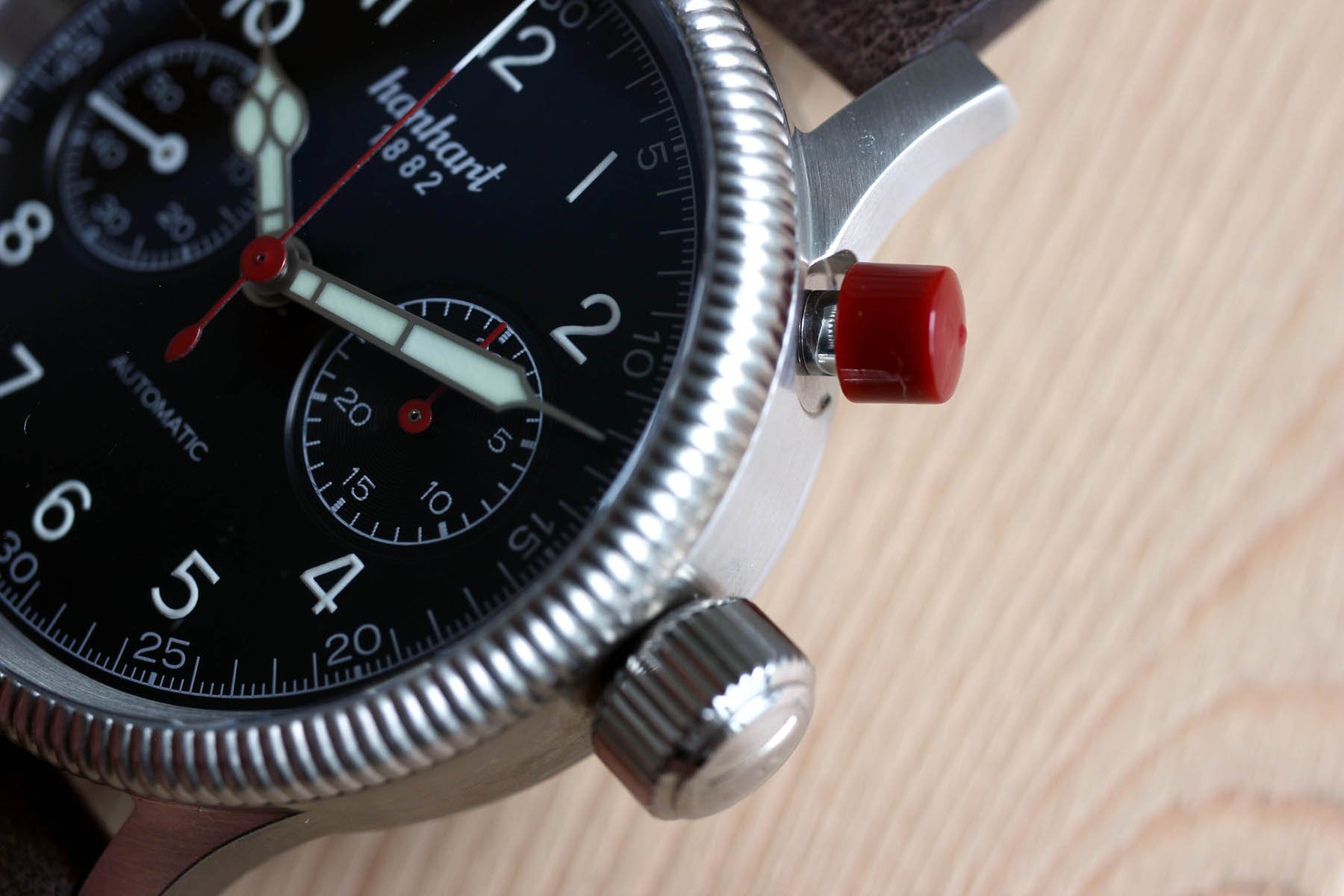 After a few days, I  realized that the pushers on Mk 1 and TwinControl differ quite a lot. The Hanhart TwinControl has much thicker pusher tubes than the Mk1’s single pusher. The pusher caps on TwinControl are also a hair wider, I believe. In comparison to the TwinControl, the Hanhart Mk 1’s pusher is charmingly compact and chic.

If you look from the side, you can also notice, how different the lugs are. The lugs on the Mk 1 have much sharper edges. Whereas theTwinControl’s lugs slope down rapidly. For me, the MK 1 wins here again. I much prefer the proud pusher and old-school-shaped lugs. 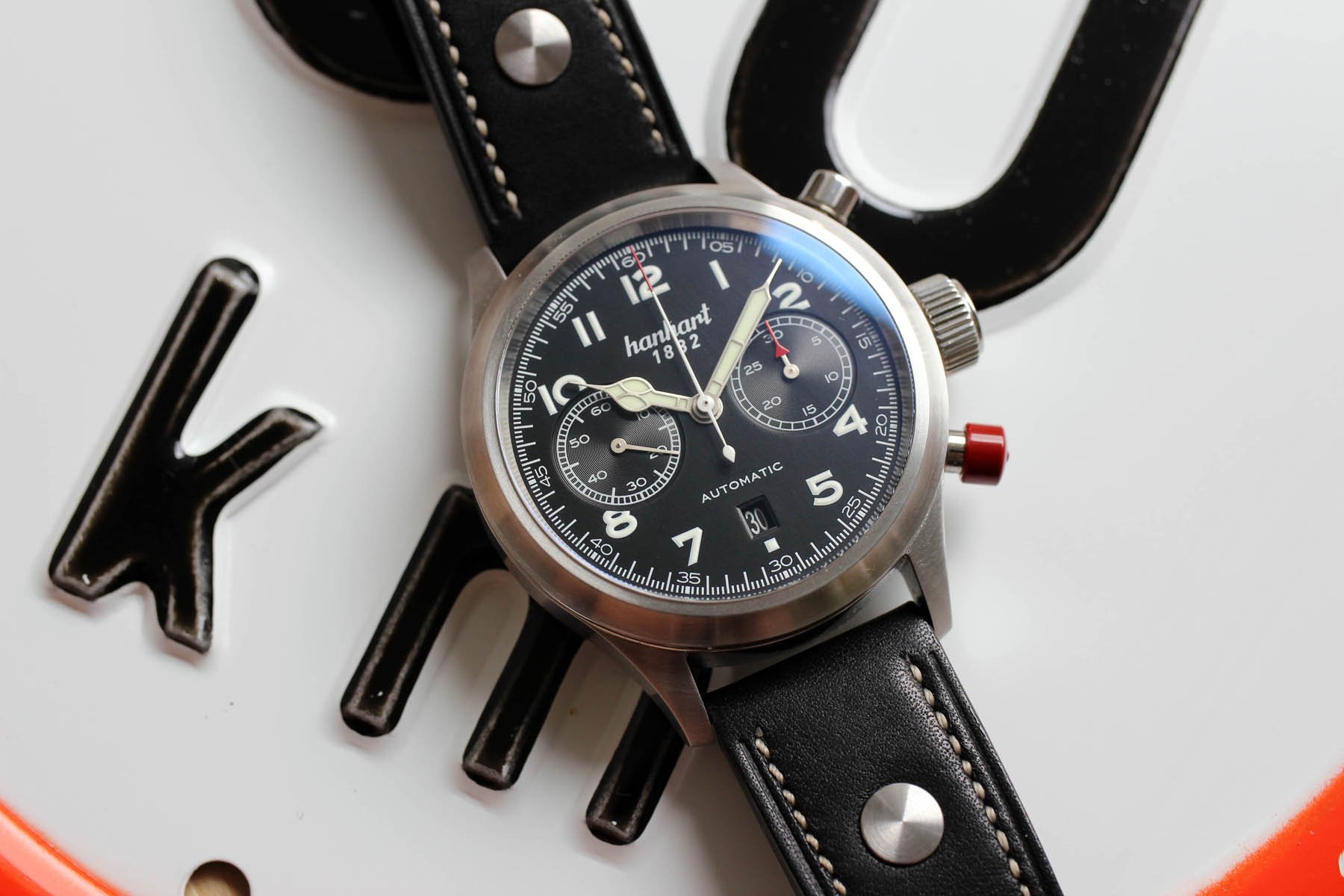 What is the button made of?

After a week, the picture of an old Hanhart chronograph came to my mind. I don’t even remember seeing vintage pieces with red pushers as the coating has, by now, more often than not worn off. So I started to ask myself, how long will the painting on modern Hanhart pushers last? That was the moment when I realized that red pushers might not even be made of steel.

Pushers on Hanhart Pioneer are made of HyCeram…

To confirm this, I approached Mario Gaspar, local Hanhart distributor to enlighten me on what material Hanhart uses for in-house pusher production. “Pushers on Hanhart Pioneer are made of HyCeram, that combines the advantages of 60% microfine ceramic and modern 3D cross-linked polymers. It’s chemically resistant and could resist temperature up to 200°C,” says Mario. I guess it won’t melt in the next few decades unless you plan on spending them on the Sun’s surface… 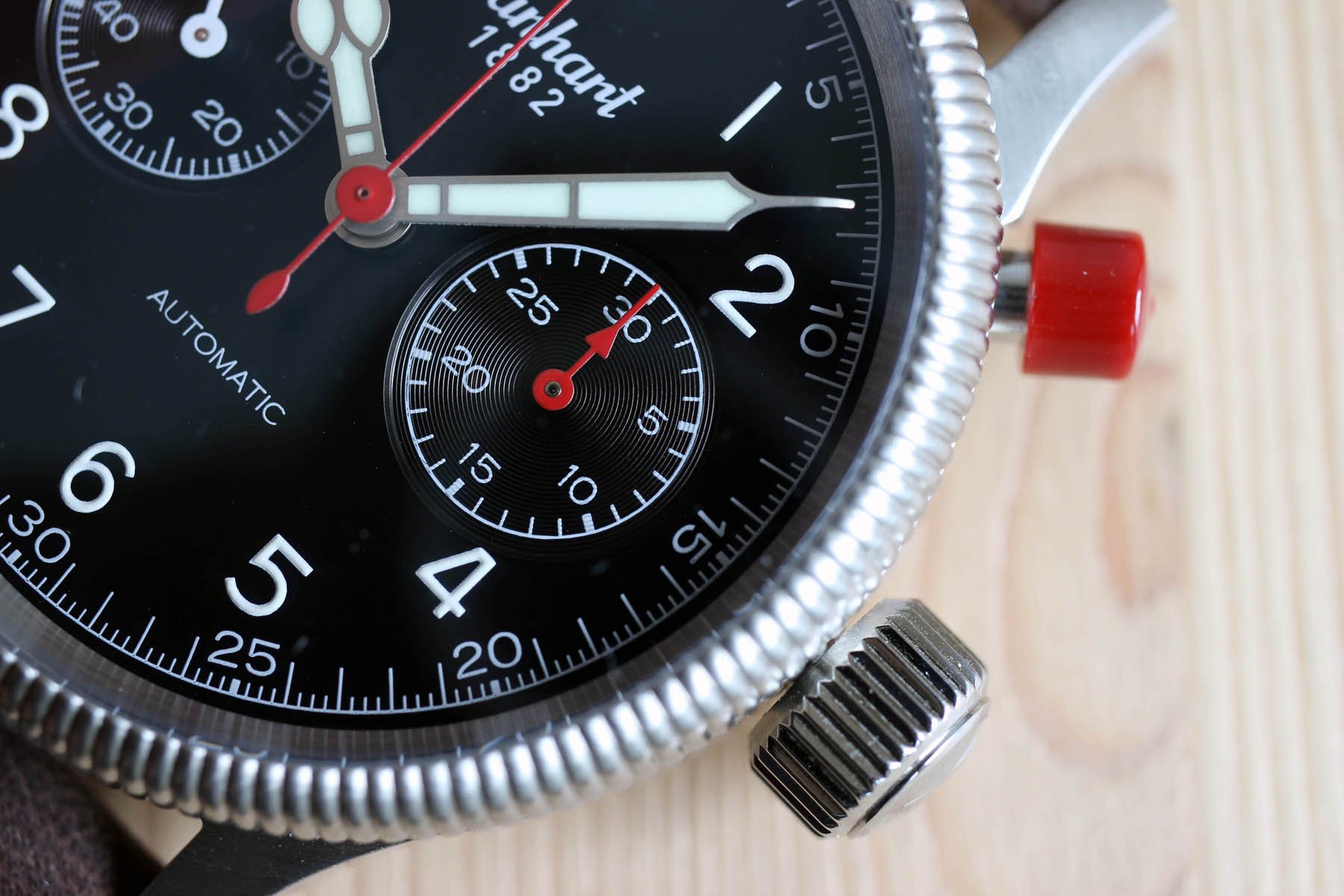 The dials on both models look almost identical. It’s just the rail-tracks in the sub-registers and thicker Arabic numbers that split the two apart. Here Hanhart TwinControl wins, as I consider numbers on Mk 1 too slender resulting in their feeling a little bit lost. I don’t know why Hanhart decided for the slimmer typeface in this case. The original one is quite rich and fat (and better, in my opinion).

I saw on the web that you can get the TwinControl with a fluted bezel too. The flat one is nice and modern, but, for me, it kills all the Hanhart sentiment. Additionally, the fluted bezel is surprisingly nice. It embraces the glass precisely, there isn’t the slightest wobble in operation. It rotates easily, but not too loosely. Its high and round shape is a joy to operate. For me, it is in the same class as Breitling Navitimer bezels, which it feels quite similar to. It’s practical for short and simple timings and it looks beyond cool. I would go with the Hanhart MK 1 this time, 100%. 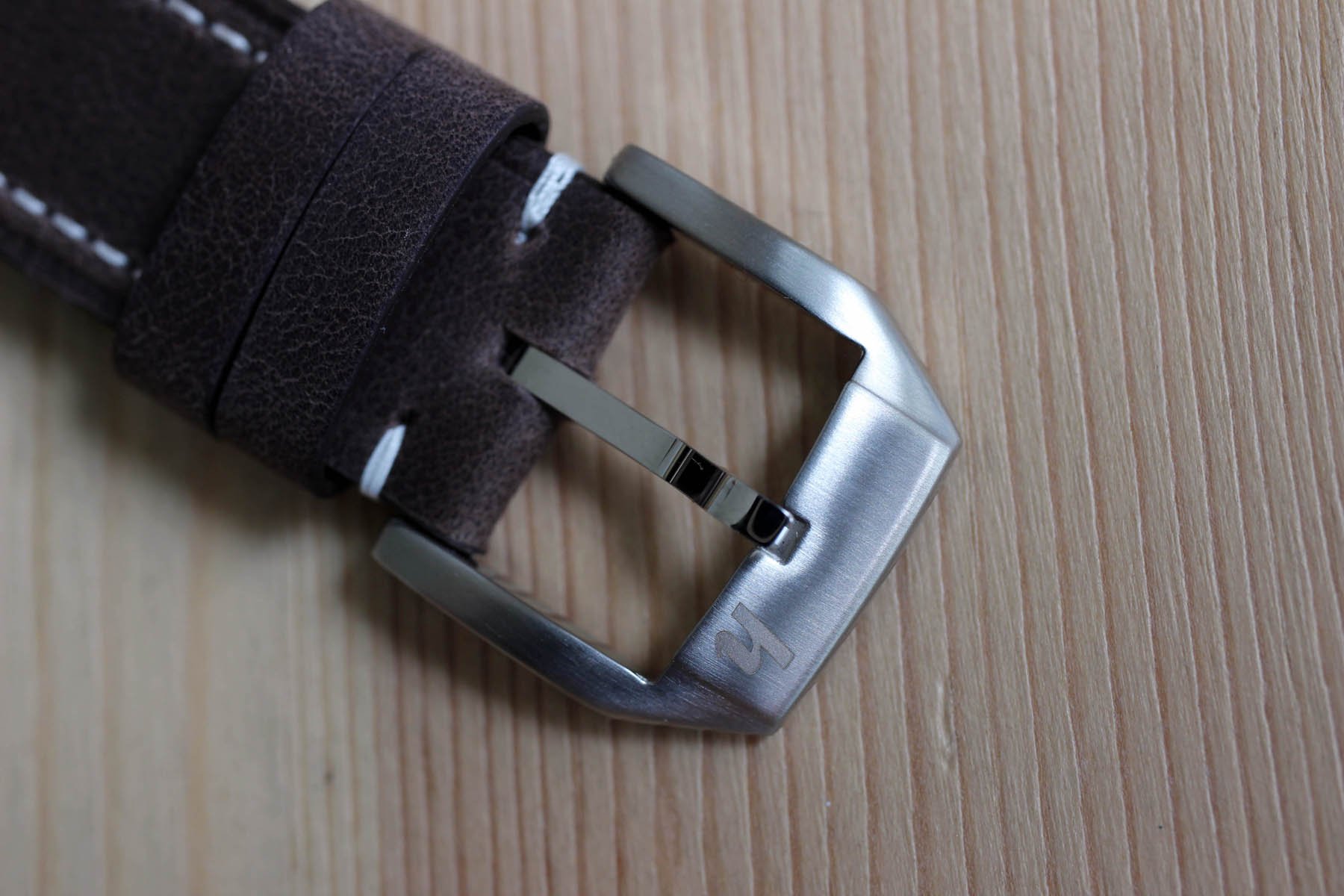 The crowns are identical in shape and style. The Mk 1 crown is just a bit smaller. Winding is as comfortable as any crown of this type could offer. I will just say, that if you consider Hanhart to be your daily beater, then you probably won’t touch it as much as both models are powered by automatic movements. I guess the market dictates the priorities here, but I can’t but think that manual calibers would fit these designs better. Leather straps with iconic rivets are thick but surprisingly supple. And let’s not forget Hanhart buckles! They really nicely shaped and quite original. 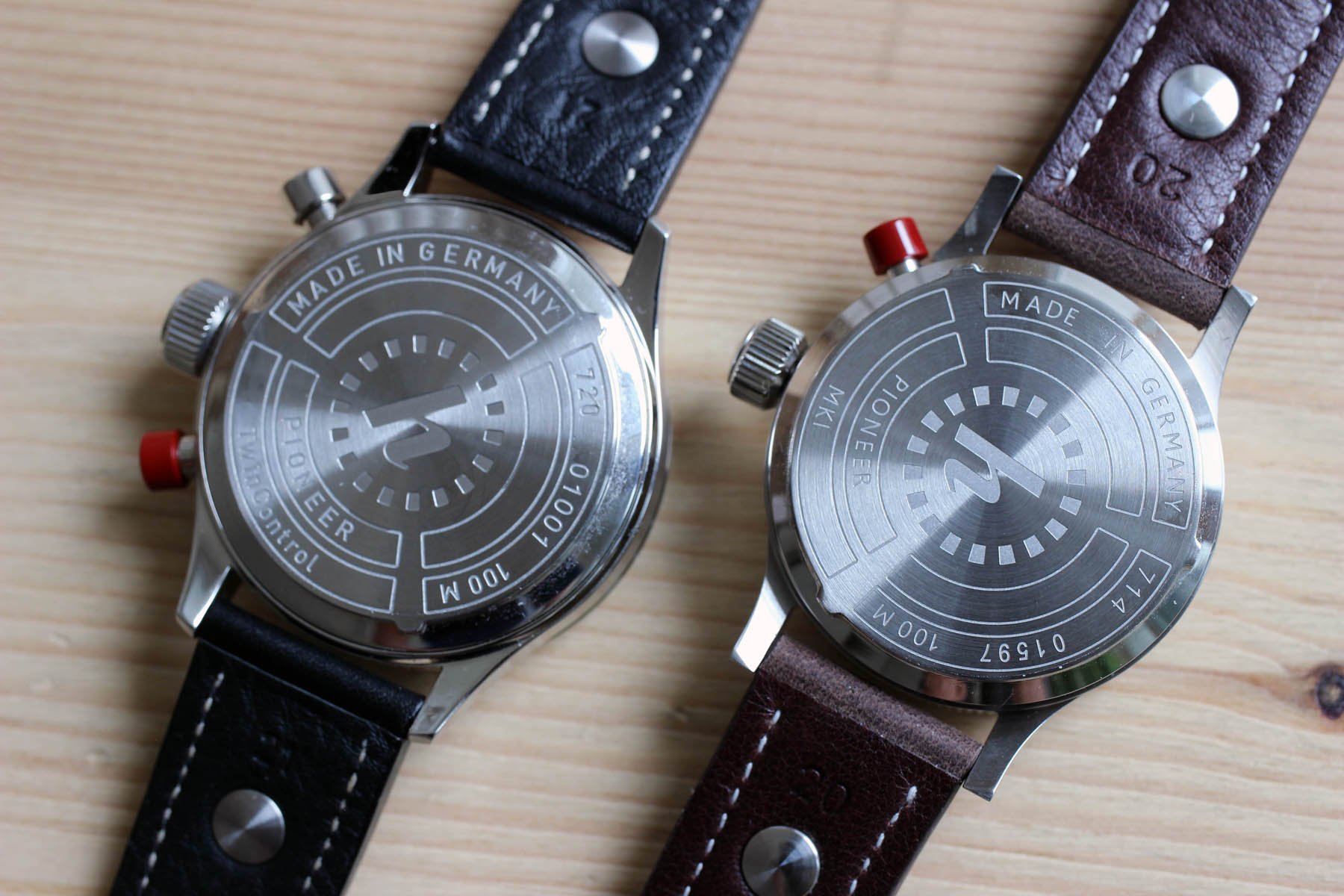 Last, but not least are the case backs. Both are steel and non-transparent. I don’t know if that’s just me, but they are so awfully boring. What I always admired on full case backs, is the option to create something unique that allows the manufacturer to uplift the brand aura. Bring a new angle. Play with a story more. Well, I like simplicity, but this is just too simple. Almost cheap. It looks like something I could do in PowerPoint. One big missed opportunity for Hanhart.

Before the review, I saw two almost identical Hanhart watches and I didn’t expect much difference. The Mk 1 and the TwinControl are similar in style, but they have so different attitudes. The case detailing is well-considered and brings a lot of character to both pieces. As both watches wear quite tall, I think 40mm diameter was just enough for me. The fluted bezel was a big charmer, although I also liked the date on the flat-bezel TwinControl.

If I had to decide between the two, I would take the mono-pusher Hanhart Mk 1. Although I would rather like to see it with a more patinated lume in yellow-ish vintage tones. But which one of these appeals to you more? Let us know by voting below. You can find more information and full specs here and here.