Hands-On With The Corniche Heritage Chronograph

This will be a bit of a controversial review. In general, we’re not that fond of watches with fancy names and quartz movements. So it would have been understandable if we had passed for the Corniche Heritage Chronograph as well. But we didn’t. I don’t exactly know why to be honest, hopefully, the review will make it clear.

For investigation purposes, I’ve done a little query on my Instagram account and asked what the first thing was people thought about when looking at a picture of this watch. The majority answered ‘Patek Philippe, reference 5170’ and some said ‘Lange 1815 Flyback Chronograph’. The Patek was the first watch I thought about as well when I got the Corniche in my hands for the first time. Upon further investigation, both the Patek Philippe 5170 and Lange 1815 have roman numerals. The Patek has a different set of hands as well. The Corniche’s hands are more or less identical to the Lange 1815, and this is where the Lange answers came from I guess. Despite these differences, it’s quite clear that the Corniche Heritage Chronograph strongly resembles these two highly regarded watches. 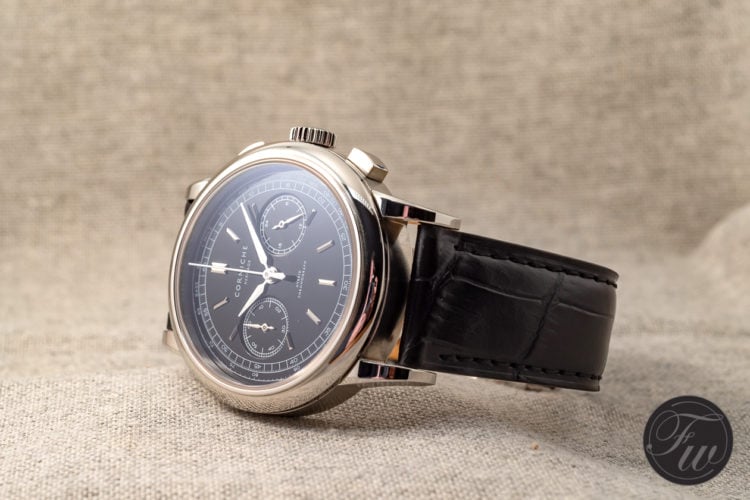 The brand name ‘Corniche’ finds its roots in the famous coastal roads, between Nice and Menton, at the French Riviera. The founders of the brand seem to have spent their childhood in this region and found inspiration in that to name their brand after these roads. I’m just thinking, this might have very well been the spark for me to do the review, as coincidently, this is where I spent most of my childhood holidays as well. For the rest, I can’t feel much affection for the explanation for the foundation of Corniche. Explained as a strong belief that luxury and versatility doesn’t have to be compromised (I didn’t know it was), and endeavouring to make the ordinary extraordinary and the everyday timeless (doesn’t ring my bell). 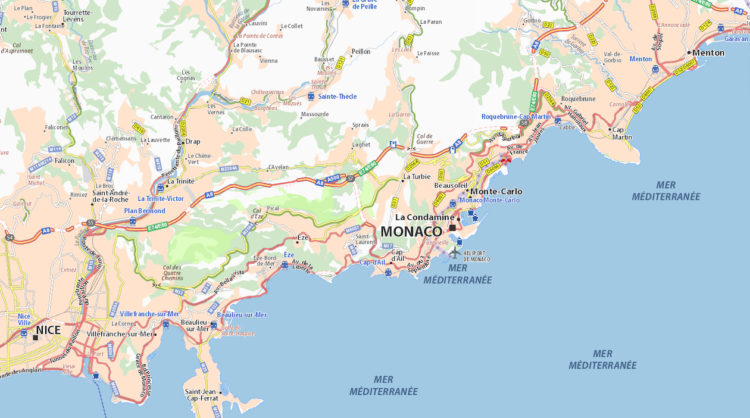 Map copied from and (c) www.viamichelin.com

Looking at their website, I must admit, however, that Corniche extremely well succeeds in transferring the feeling of the Côte d’Azur into their watches. And this might very well help for anyone knowing that feeling to want a Corniche watch. The video shown here perfectly explains what I mean.

Corniche offers three different watch lines today. The 40 mm Men’s- and 36 mm Women’s Heritage, both with Miyota 2025 quartz movements. Then there’s the Men’s Historique in 37,5 mm, available with either a Miyota 2025 quartz or a Miyota 9015 automatic movement. And thus the model we review, the 39 mm Heritage Chronograph with a Seiko VK64, so-called, hybrid chronograph quartz movement. Besides these regular and general available models, Corniche presents some limited editions as well. Examples are the Cap Ferrat Prestige, the Heritage Roquebrune and Visage No2, and the Paloma Beach. Of which respectively only 250, 399, and 499 pieces will be, or have been, produced. 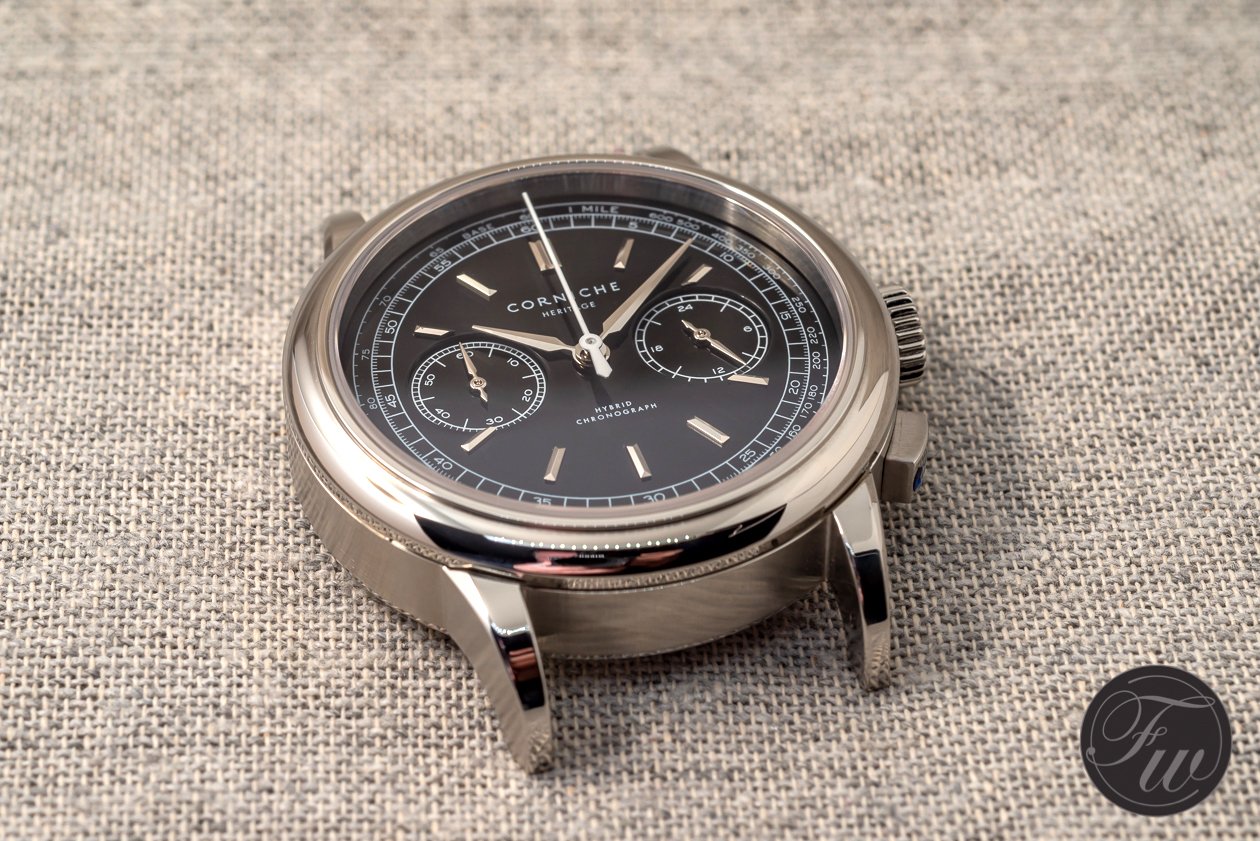 The last thing I want to be is snobby. But as mentioned at the beginning of the article € 385,= watches are not the standard here at Fratello. Normally I wouldn’t start mentioning a watch’ price before writing anything else about it. But now I think it’s important to do so. Because it’s all too easy to measure and review this watch according to our regular standards, and that wouldn’t be fair. Let’s face it, the price of this watch competes with the price of a strap of many watches found in our reviews.

So, that means that the Corniche Heritage Chronograph is of way lesser quality? No, it doesn’t! And that’s the surprise, that’s the good part. Many of its specifications, and certainly the way the whole watch is finished, are way beyond my expectations. As can be learned from my little Instagram query, it’s been compared to two of the most famous chronographs around. The Corniche Heritage Chronograph is an extremely good looking watch. 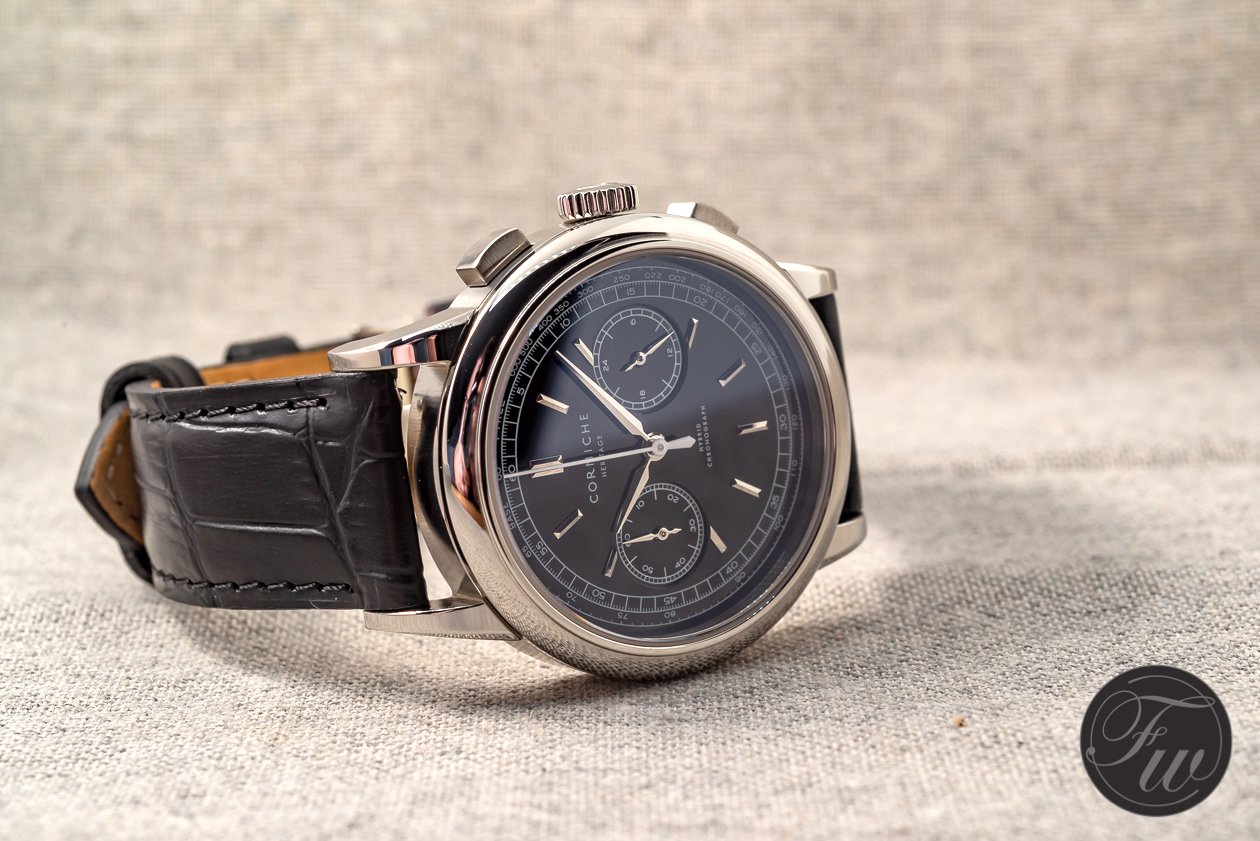 Being good looking is a key feature in the success of a watch, so that’s 10 points for the Corniche. A slight point of concern is where it got that looks from. Some people might not like a watch which heavily relies on the design of another watch, certainly not if it’s a highly respected model. Most of us will remember Dan Henry. Their watch designs are all directly taken from well-known vintage watch models. Or the brand Steinhart (I’m sorry no link to them in my article) using almost straightforward designs copied from iconic watches as well. They might sell, however, don’t get much credit from watch aficionados. From time to time it can be heard that these kind of watches are homages to the originals. Not in my book, they’re just using a stolen design to ignite sales.

I wouldn’t go that far and place Corniche in that same league though. Inspired by the early days of chronographs and looking at everything from early Longines with the 13ZN movements, to early and new Patek references and Lange’s astonishing chronographs, Corniche couldn’t come up with much different than their current design. Certainly the black dial resembles the Patek and Lange quite a bit, however, there will be different colors in the near future as well which will give it totally different looks. 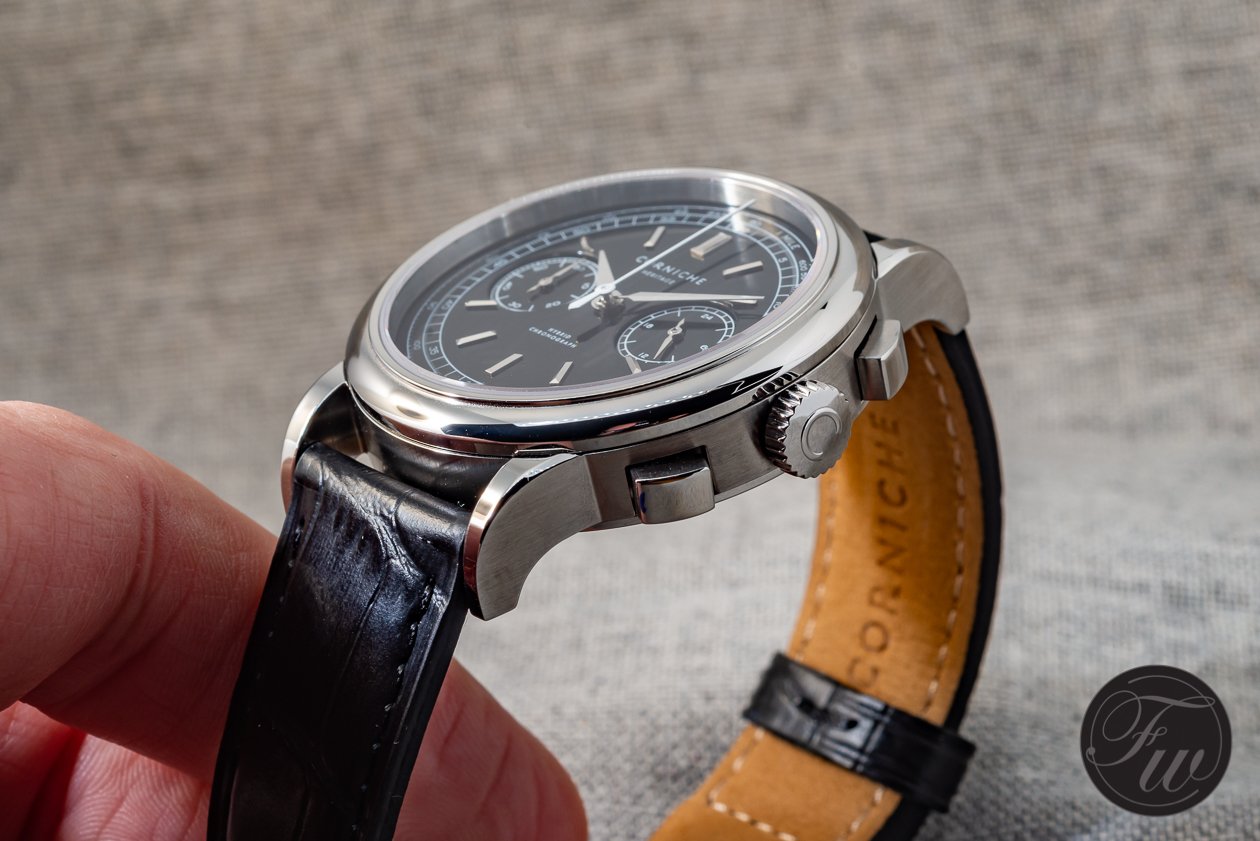 Another matter which influenced the design of the Corniche Heritage Chronograph is the choice of movement. Corniche wanted to keep the price of their chronograph south of $ 500.=. That ruled out most of the automatic movements, except for some Chinese. After some research, it became clear, however, that there really aren’t any good ones while still keeping the price down. And after hearing horror stories regarding reliability issues from colleague watch manufacturers the choice was made for the SII (Seiko Instruments Inc.) VK64 reliable hybrid movement. This movement has a layout which looks like a duograph, although the register on the right side of the dial, in fact, isn’t a chronograph function but a 24-hour time indicator.

Case design, hands, and hour markers are taken from Corniche’s time-only Heritage 40. This to keep the family bloodline clear. The diameter was slightly changed though. It came down from 40 to 39 mm. With a more busy dial than the Heritage 40, and because the chronograph is somewhat thicker, the watch would become too bulky in 40 mm. The Corniche Heritage Chronograph is commemorating the 5th anniversary of the Corniche brand. The case back has Corniche’s traditional pine tree engraved. The pine tree’s iconic silhouette is a classic along the rocky coasts of Southern France from where the brand roots from. 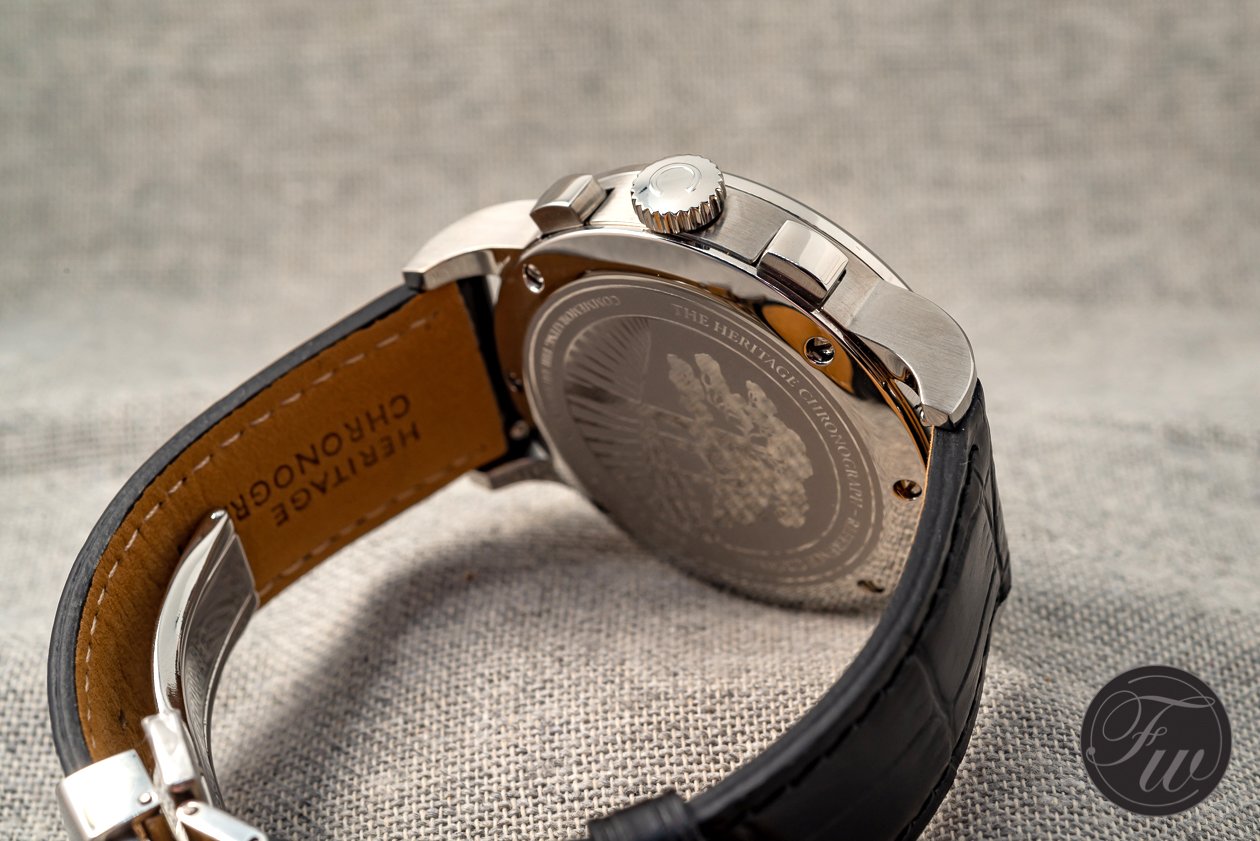 A short note on Seiko’s VK64 Hybrid Chronograph, also known as mecaquartz movement. In my ears ‘hybrid’ sounds something like ‘almost seamless’. Is it a quartz movement, or is it not? Whilst the timekeeping mechanism indeed is essentially quartz, the “meca” part comes into play every time you reset the chronograph. With components taken from Seiko’s own in-house mechanical chronographs, the chronograph hands are disengaged from the quartz motor and are snapped back to zero, meaning you don’t get that sweep back to zero that is representative for standard quartz chronographs. Rather, you get a timepiece with the distinct look and feel of a mechanical chronograph.

Mecaquartz calibers aren’t new, they’ve been around for years. Jaeger-LeCoultre introduced it’s caliber 630 at the end of the eighties. A well-known watch using this movement was IWC’s Pilots Chronograph with reference 3741-001. However, these movements were beautifully built and decorated and meant to be high-end. Seiko adapted the principals in the first place to produce an affordable chronograph, still, with sort of a mechanical feeling.

A good looking watch with hardly arguable perfect dimensions. A solid three-piece stainless steel, 5 ATM, case design. Sporting sapphire crystal and a nicely etched case back. A quick-release croco-print leather strap with folding buckle. Everything supplied in a beautiful box with adequate booklets and certificates. And that all at € 385,= shipped – what’s not to like? 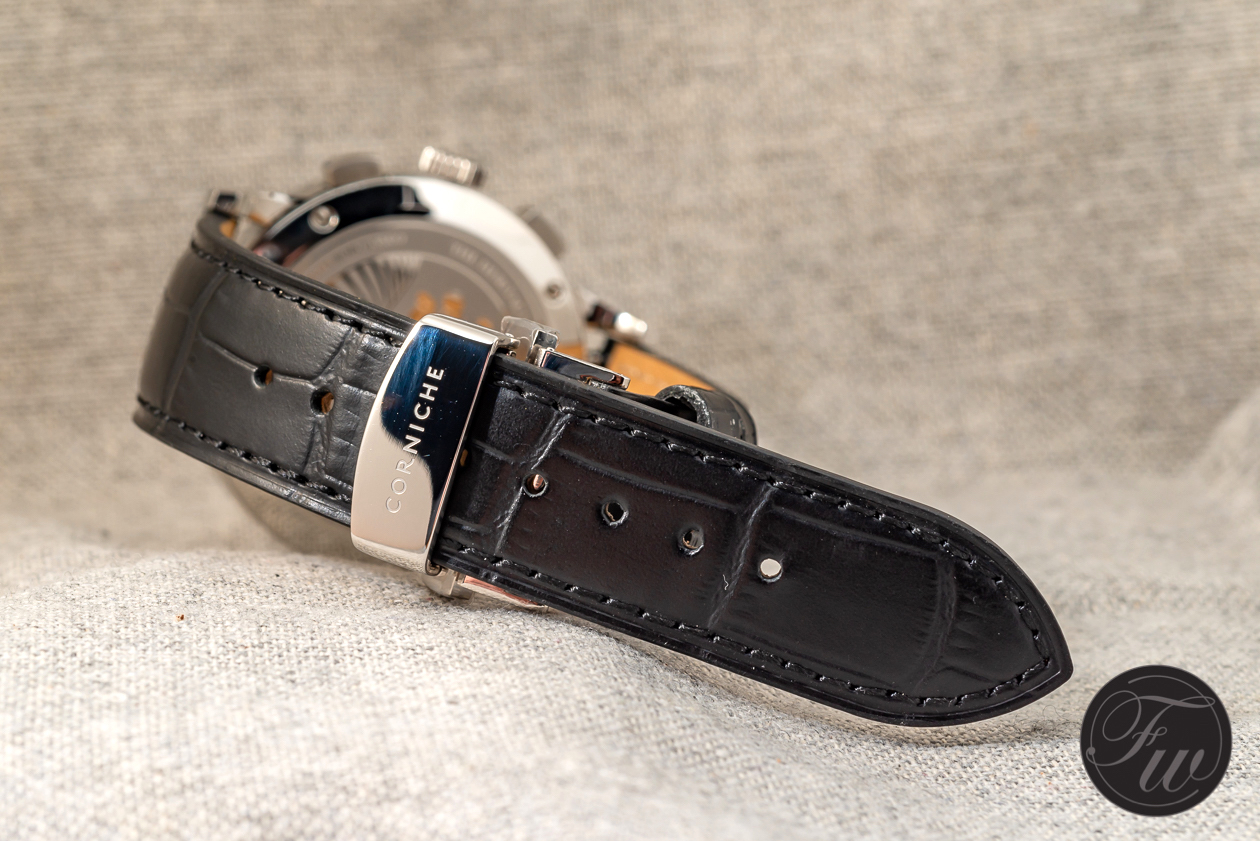 Not much. I would have loved the strap to be somewhat softer and more flexible. But hey, with a strap I liked better I could have easily added an extra half of the price of the watch. So what else to whine about? The only thing I really found a bit annoying, and not on par with the rest of the watch, is the way the chronograph pushers are fixed. Although square, they’re able to rotate slightly and that just doesn’t look and feel very right. Nothing influencing the functionality though, that’s perfect. It just looks a bit weird, I hope the pictures here above will explain what I mean. 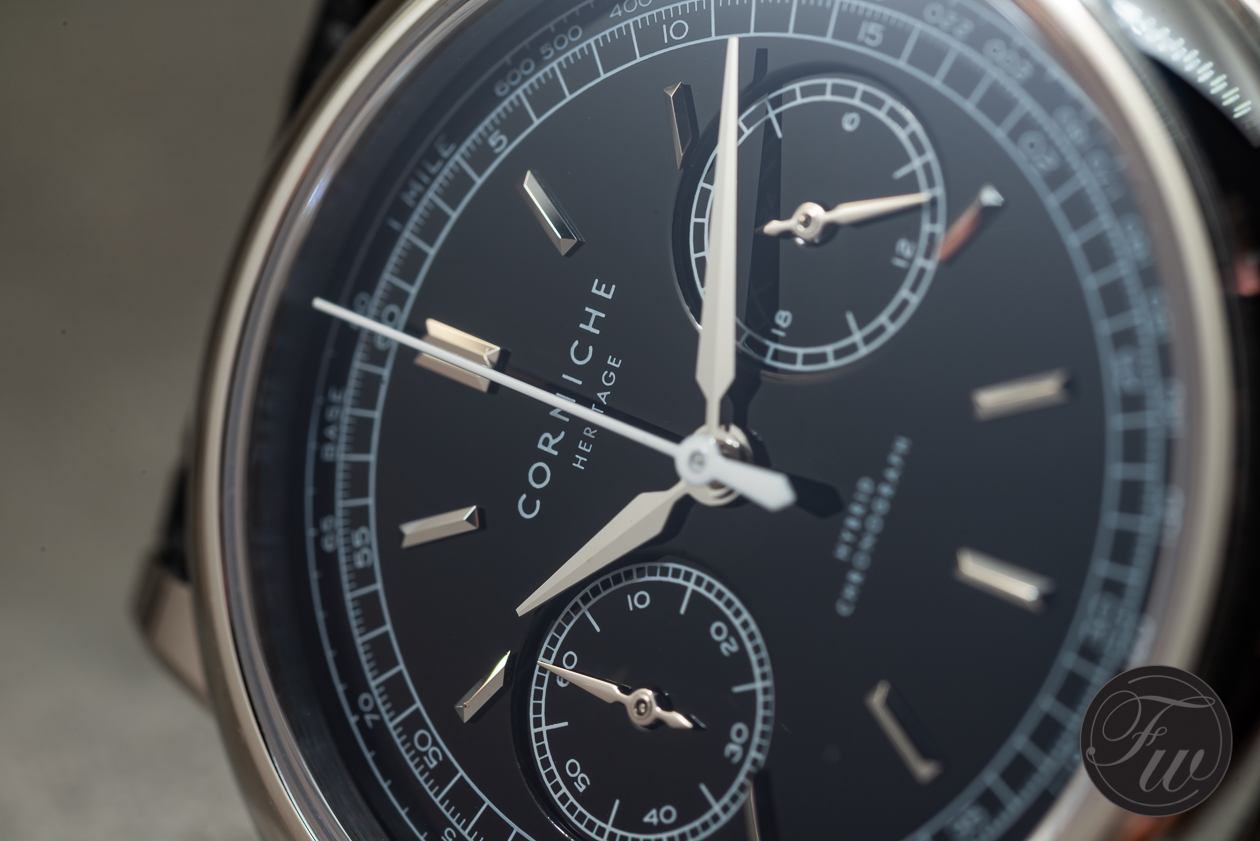 More information on Corniche, and as well on how to order the Heritage Chronograph, please head over to www.cornichewatches.com 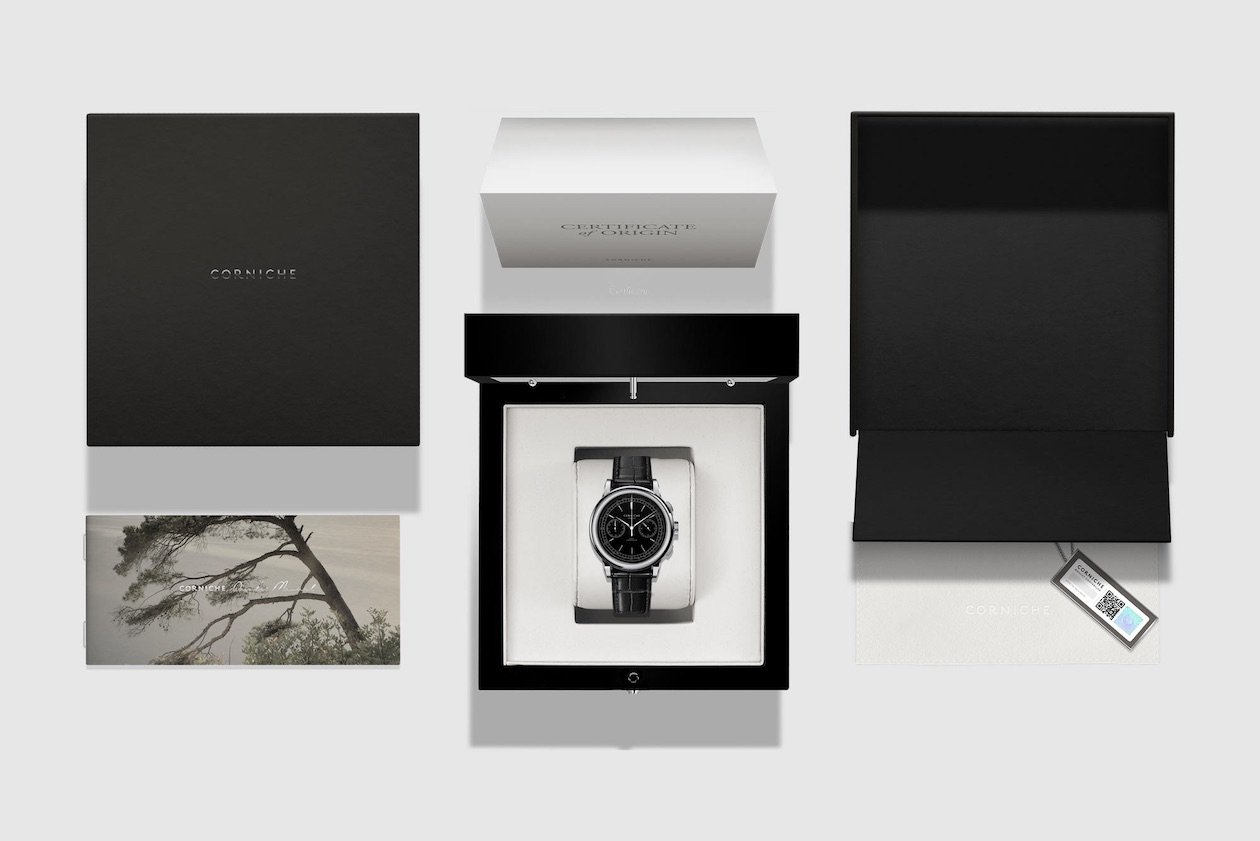