Hands-On With The Farer Pilot Watches Bradfield And Morgan

The same but so, so different...
Tomas Rosputinsky
comments 3
Share

The design of early “three-hander“ pilot watches never spoke to me. They just looked too much like a dashboard instrument and not enough like a watch. Farer however took that design and transformed it into something that really grabbed my attention. Let’s take a closer look at the new shiny Farer Bradfield and the more subtle Farer Morgan.

Farer often launches as many as three models at a time. As usual, I couldn’t make up my mind so I asked to review two models. After carefully checking the new line of Farer Pilot watches online, I scratched the Cayley and opted for the white dial Bradfield and the black, night-rider Morgan. 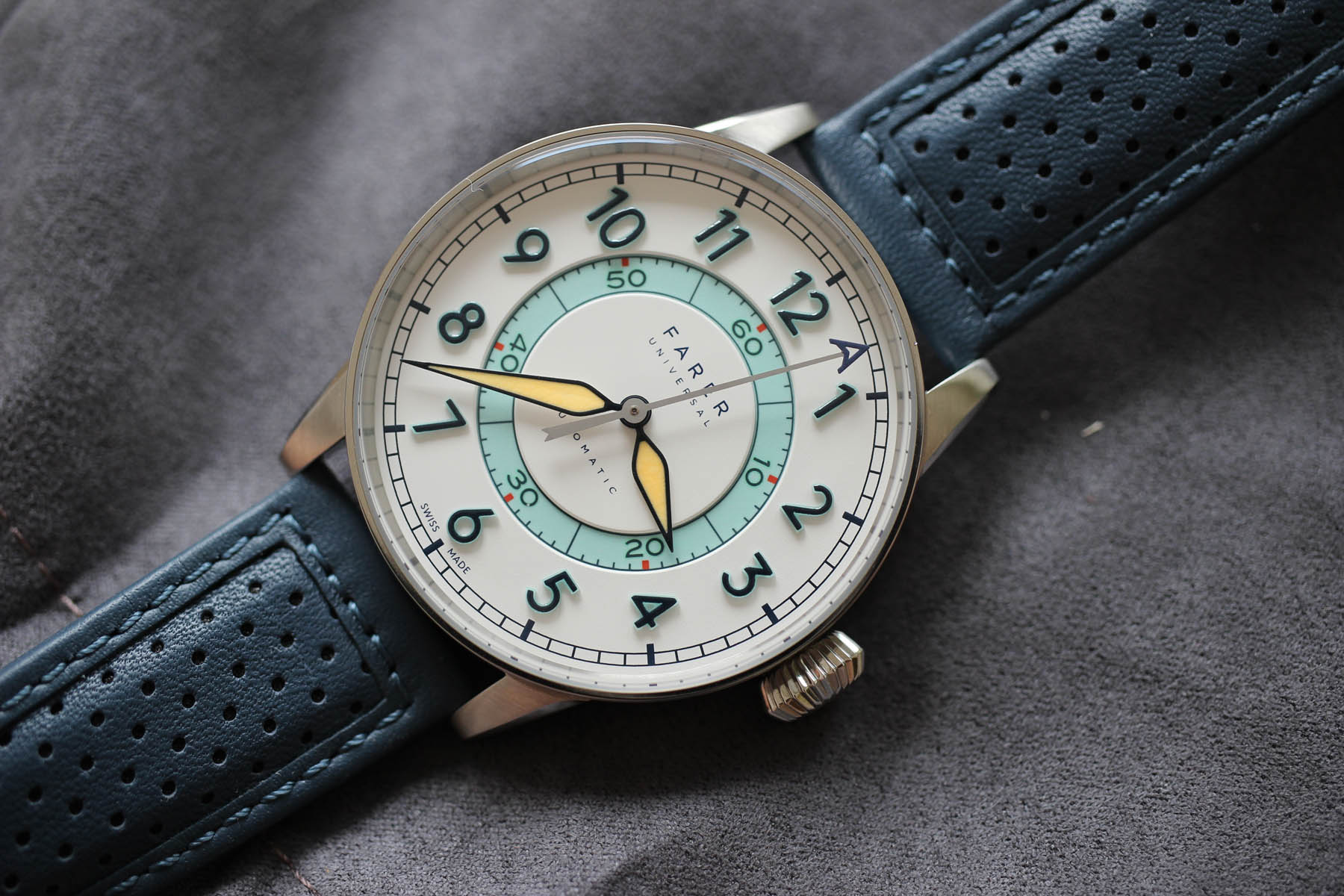 You don’t need to wait till the end to find out who my winner is. My vote goes to the bright Farer Bradfield and I have to tell you, it was not a close call. The Bradfield crushed the Morgan on all levels. Why is that when both watches have the same case and handset? Blame the dial.

Do you remember the creative genius of the Farer Maze? Farer did something similar this time. The brand’s feel for choosing colors, shapes, and typography is just phenomenal. Even with such a simple watch like the Bradfield. I am left speechless by the result that preserves and respects the elements of the original iconic design while, at the same time, creating a fresh and novel look original to Farer only. I don’t need to be a pilot to see the early 1900s pilot watch in the Farer Bradfield. 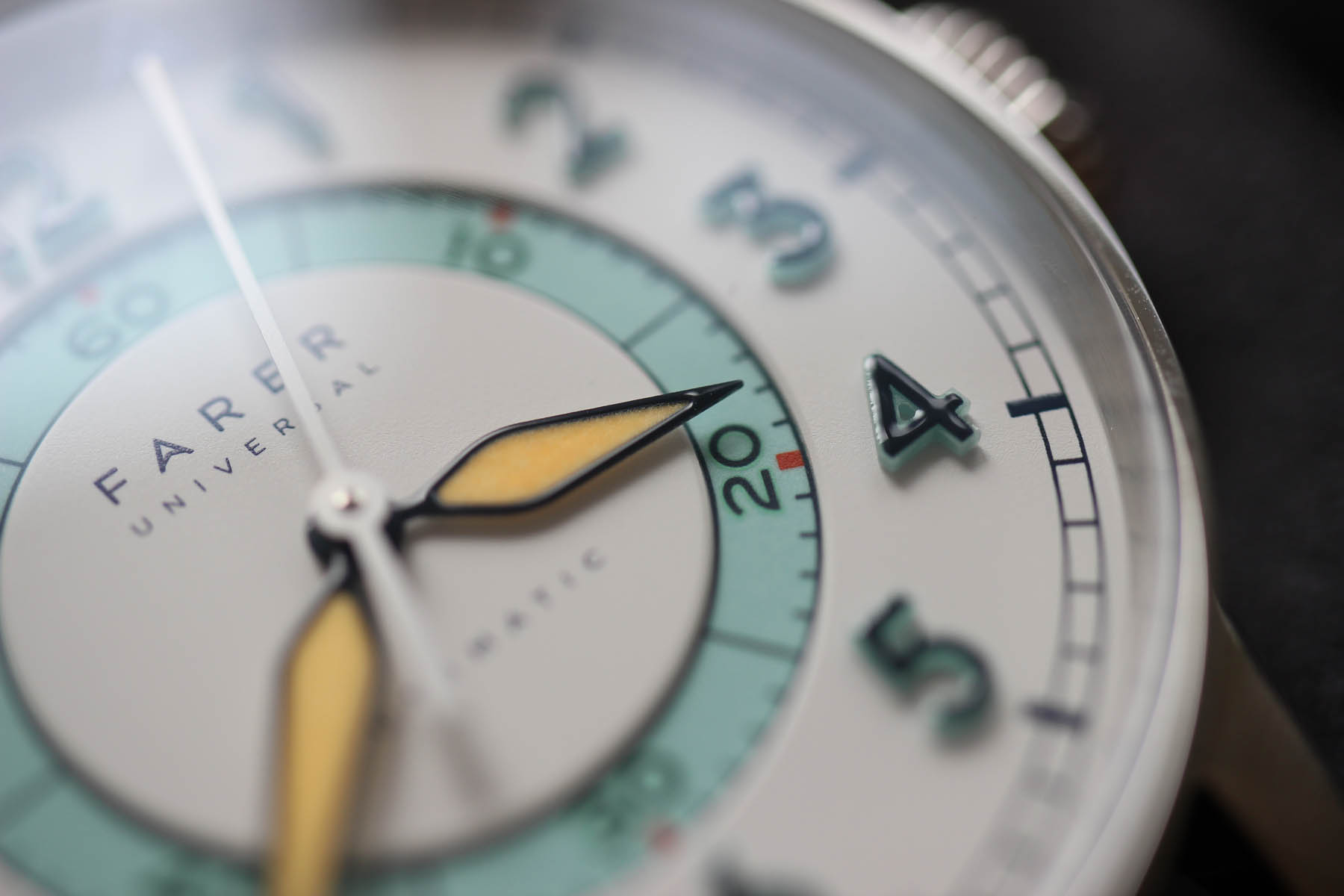 The big modern Arabic numbers sit so high over the white-off dial that they feel like they were carved onto it. Their deep blue top finishing is very reflective and I can’t decide if I see some liquid or porcelain in it. The mint-colored side of each number underlines the contrast with the dial. The handset looks majestic in its size. If we were chatting privately over a pint, I would tell you that the alpha hands are gigantic and sickly overweight. Sickly good, if you ask me! And look at that sponge-like yellow lume on it! Amazing.

Even after three weeks of looking at the Farer Bradfield, I struggle to believe it has a 39mm diameter. My doubts were so big that for the first time ever with a modern watch I had to dig out my calipers and check the factory specs. Everything on the dial feels so big, it feels like I am wearing a 43mm watch. Well, I am not. To postulate that the dial size equals the case diameter wouldn’t be far from the truth. 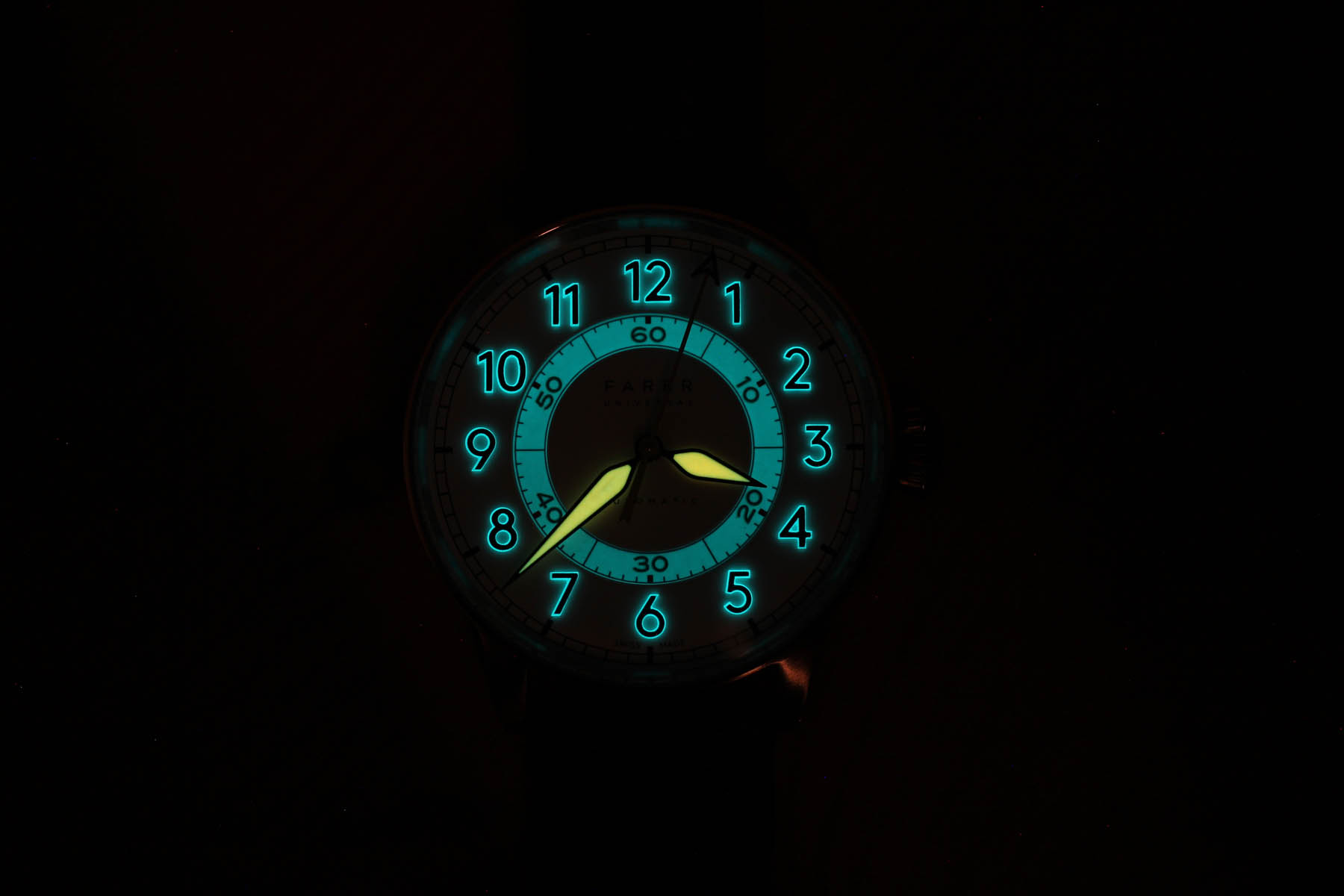 The central dial disc sits at the same height as the outer white part. The mint-colored minute track dividing the white dial is slightly recessed and looks like a sea washing the shores of the small central white island. In daylight, nothing looks suspicious and it’s easy to enjoy the functional color harmony. It will be the first night after unboxing that your excitement will catapult you over the roof. Everything that I referred to before as “mint” is nothing less than the highest Grade-A Super-LumiNova. It makes for one heck of a show after sunset. Just saying, get ready to lock yourself in a dark room…

The story behind The Farer Bradfield

When I searched for the name origin, I was amused to learn that Bradfield graduated with a degree in Mathematics from Cambridge University in 1917. She was the first to apply to the Royal Aircraft Establishment at the end of WW1 where she became an expert in wind tunnels. Her work was so exceptional that in 1935, she was put on to the male pay grade and RAE directors had to fight to keep her on such preferential salaries throughout her entire career. A pretty unusual story and name for a watch that (I assume) aims to target male wrists. Hats off, Farer! 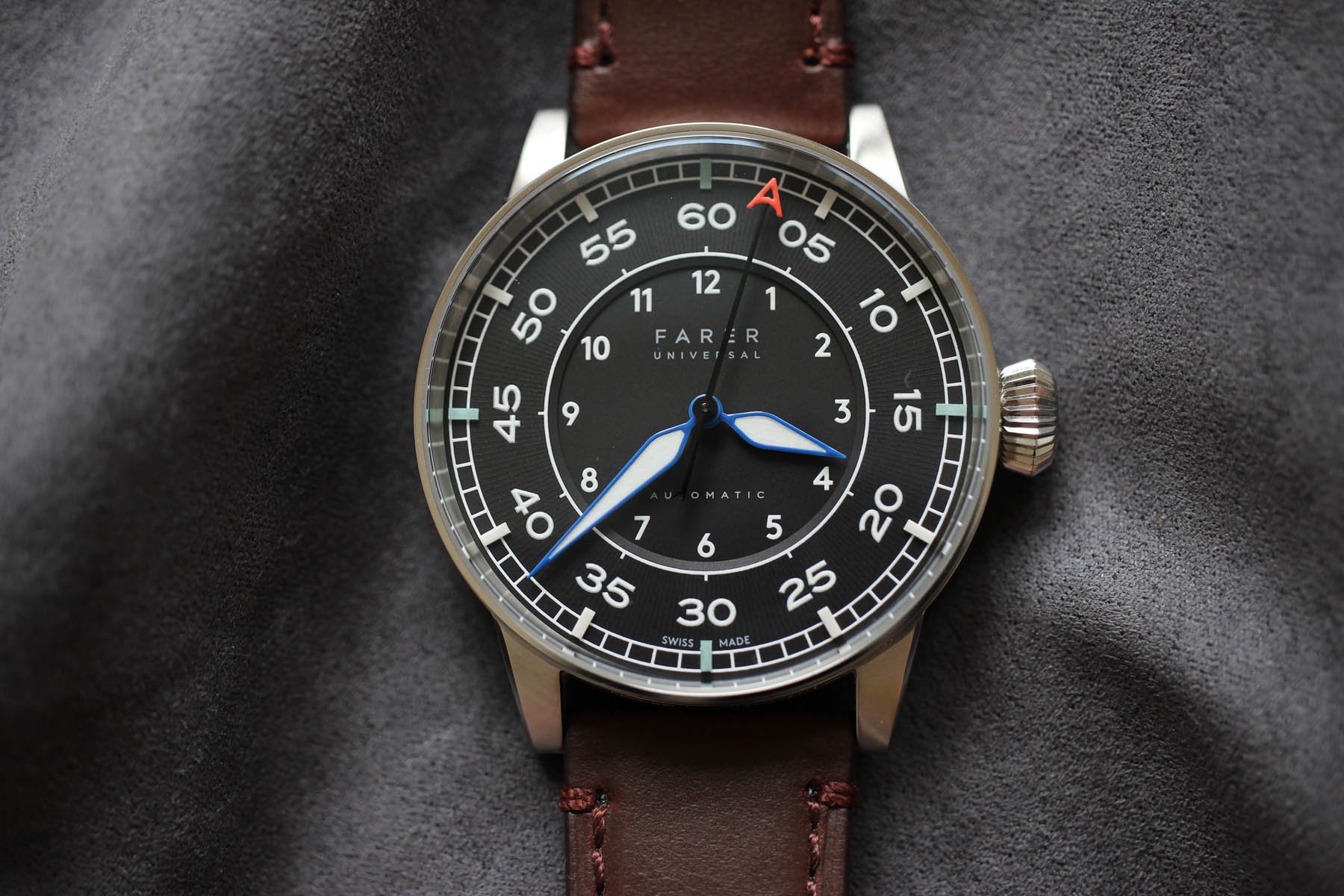 Let’s switch to the Farer Morgan that might feel a bit jealous to see me praising the Bradfield so much. Here are the major differences: the minute and hour tracks are switched, the entire central part of the dial is recessed, and the colors aren’t that vivid. The Farer Morgan is pretty much flat. Perhaps, this iteration of the Farer Pilot line is designed for a broader, more conservative audience. Yet looking at the glass half full, the Morgan is even more true to the source material’s DNA than the Bradfield.

The case and finishing

If you look at the case backs, you’ll understand it’s not only the design that makes both watches fit in the “Pilot” category. Magnetic fields can have detrimental effects on a watch movement — slowing down, speeding up, or even stopping a mechanical watch. To neutralize any potentially harmful magnetic fields around the Swiss Made Sellita SW200-1 movement, Farer created a Faraday soft-iron inner cage. With up to 500 Gauss, it delivers eight-times the standard level of anti-magnetic protection. That’s a nice detail to point out with a sub-€1,000 watch. 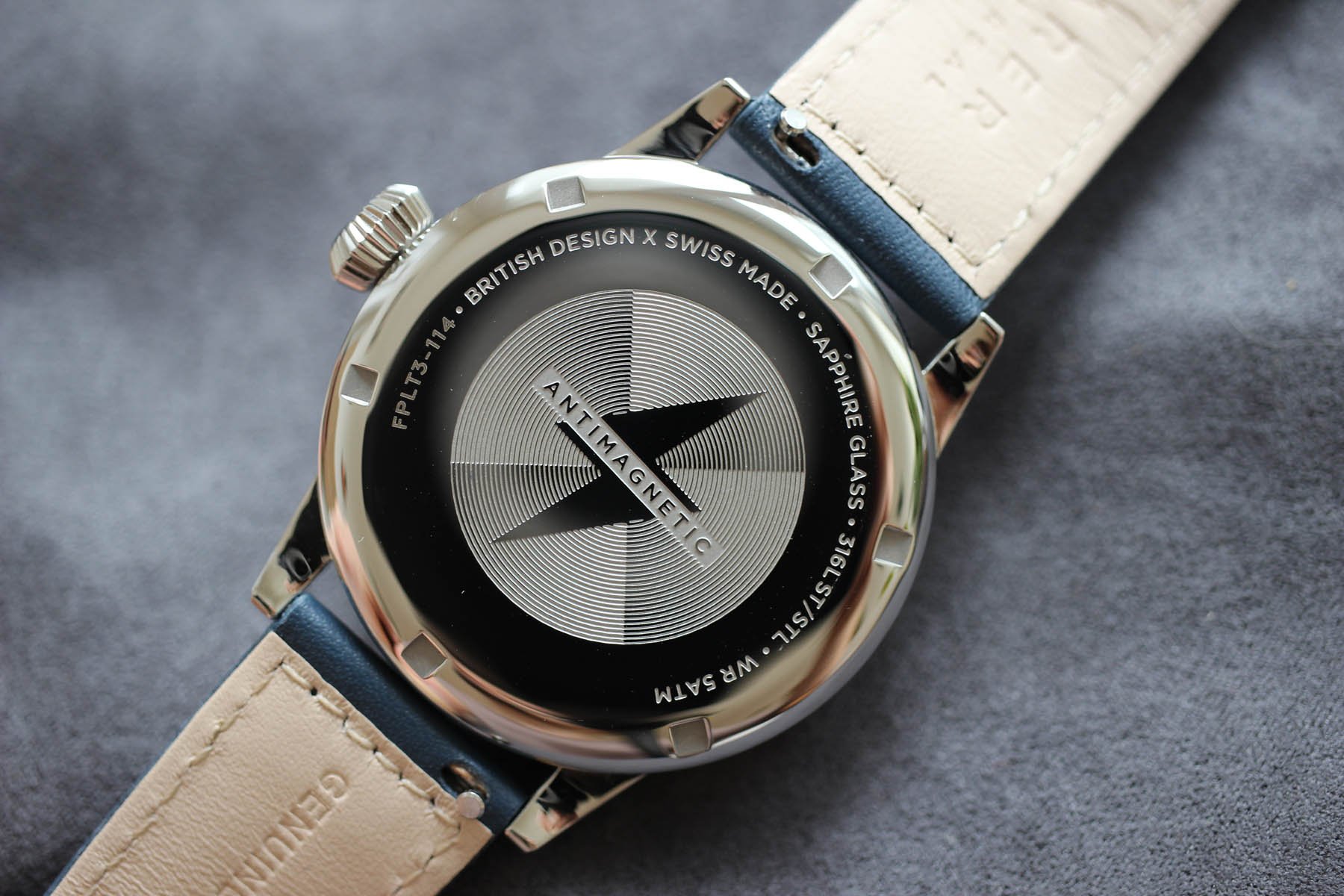 A slightly domed crystal enhances the watch’s profile. The same is true of the brushed treatment of the upper third of the case. The lugs are brushed from the top and polished from the sides, so your eyes will appreciate the bevel edges. The cherry on top is the onion styled crown with diamond-like ridges. Not only do these crowns great, but they also operate perfectly. The blue perforated leather strap on the Bradfield was more pleasant than the slightly stiff brown leather on the Morgan.

The Farer Bradfield is definitely more youthful in comparison to the buttoned-up Morgan. The only detail on the Bradfield I didn’t like is the slightly illogical position of the inner stepped minute ring. I wouldn’t object were it not followed so perfectly by the tip of the hour hand. I prefer to stay classic and have the hour hand reaching the proper track in case it has to reach something. The Morgan wins on this front (but only this front, really). 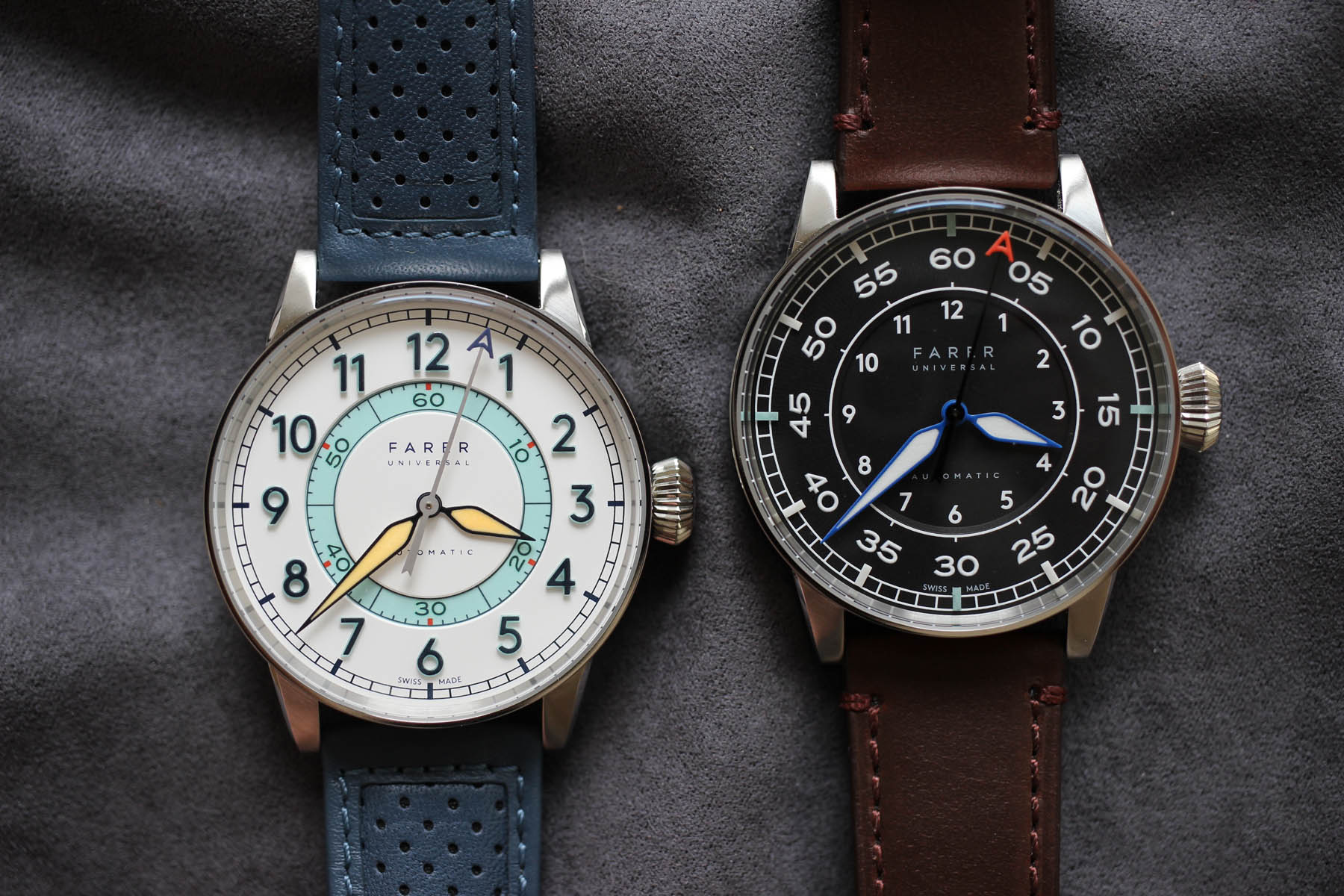 At the end of the day, I am on team Bradfield purely because I think the Morgan has not reached out far enough from the typical military or pilot watch re-interpretation. The Morgan is a safe play. On the contrary, the Farer Bradfield stands out and feels novel. If you are looking for a watch under 40mm diameter with a lot of attitude and a striking wrist presence, here it is. The night view comes as a bonus. Learn more about Farer here.

Hot Topics
Laventure Automobile Chronograph With A Proprietary Movement — Marking A Huge Leap Forward For One Of The Industry’s Most Promising Brands
155 comments
Fratello Exclusive: An Inside Look At The MoonSwatch Production Facilities
75 comments
Selling Your Watch To A Dealer Or Trading It In — Tips From A Former Watch Dealer
49 comments
Summer Splash — Round 2 : Jorg’s Tudor Pelagos FXD Vs. Lex’s Hublot Big Bang Integral Ceramic Sky Blue
47 comments
The Top 10 GMT Watches Right Now — From Ball, Grand Seiko, Tudor, And More
44 comments
Popular
A Question From A Reader: “Which Modern Speedmaster Is Closest To The Original Moonwatch?”
Robert-Jan Broer
13
(From The Archives) Shut Up & Read The Truth About Cartier Watches
George Cramer
21
Grand Seiko SBGA211 ‘Snowflake’ And Why I Didn’t Buy It
Robert-Jan Broer
22