You’ve all certainly already heard about the new Tudor Pelagos 39. It kind of stole the show last week while the watch world’s media gathered in and around the Beau Rivage for Geneva Watch Days. The new Pelagos came as a surprise but a logical follow-up to Tudor’s last two like-sized releases. It seems that no matter what it does, the brand manages to get people either excited or riled up. But an emotional response to a watch release can only be a good thing. It’s certainly better than no reaction at all. That’s especially true in a world so driven by emotions because, in the end, it’s just as much about the watch as how it makes you feel. That said, let’s first talk a little bit about how the watch made me feel, then about the watch itself.

We (the Fratello team) had a chance to wear and photograph the new Tudor Pelagos 39 while in Geneva last week. Following the path through the new Tudor building at Rolex HQ, I was filled with excitement and anticipation. Once welcomed into the new Tudor showroom, we were presented with the watch of the hour, both on the matching Grade 2 titanium bracelet as well as on the rubber strap. Some of my colleagues were also happy to see and handle the new Tudor Ranger in the metal for the first time. But none of us could escape the siren’s song of the novelty, passing the watch from one to the next with excitement. A strong first impression. But now, one week later, how has that impression aged and evolved? 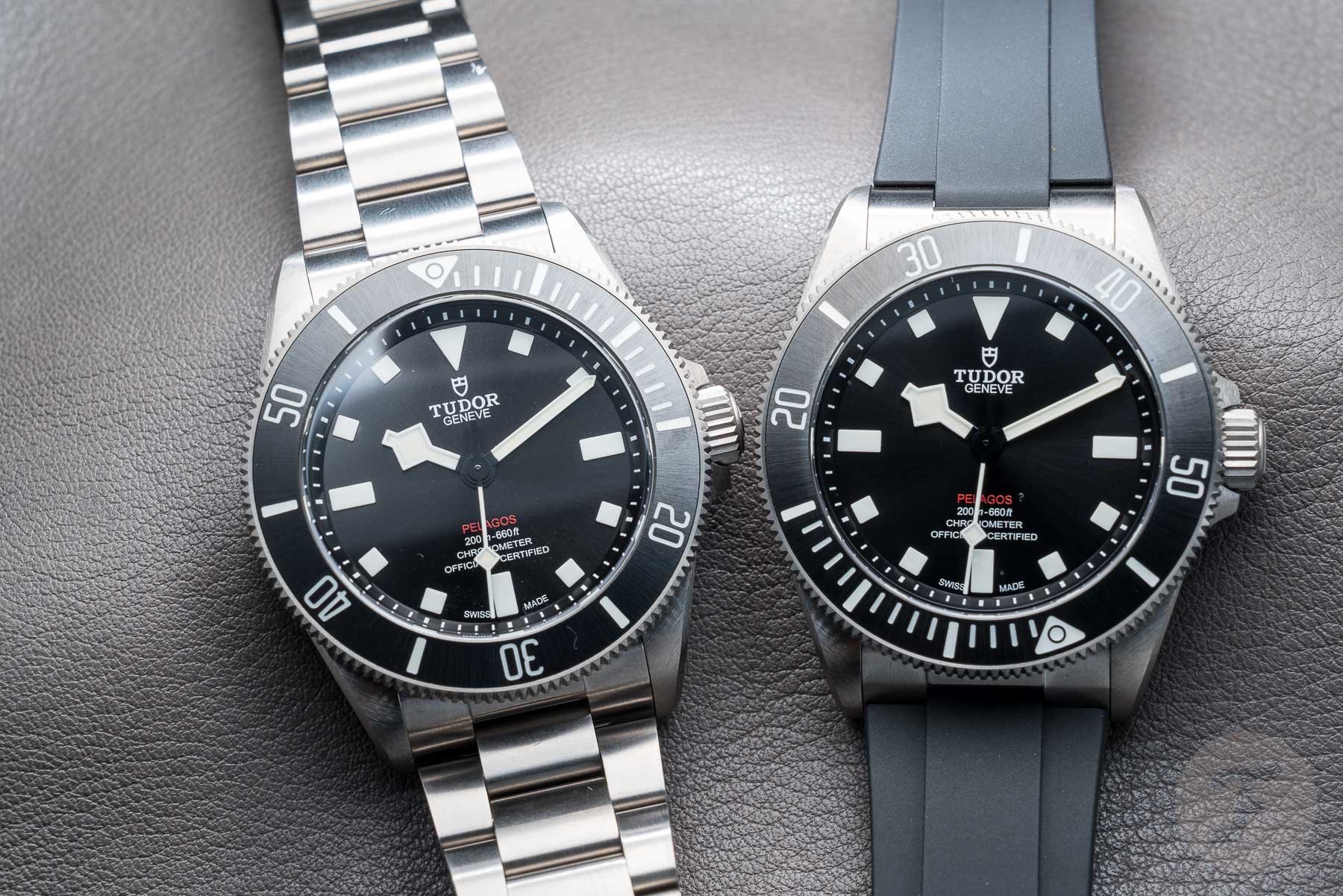 A new chapter for the Pelagos

I have always admired the Tudor Pelagos from a distance, but I have not yet owned one of the three classic models (blue, black, and LHD). The “Pelagos” name rings with the gravity of a no-nonsense, over-specced, professional dive watch. It has done so for a decade since its launch in 2012. It’s the muscular, matte black, brooding Dark Knight of watches (which I guess makes the Black Bay Fifty-Eight a rather fitting Bruce Wayne). Even the famous adjustable buckle introduced with the original Pelagos looks like something you’d find on Batman’s high-tech utility belt. Sure, there was also a rather bright blue version of the OG Pelagos, but you get what I’m trying to say.

We all remember last year’s Pelagos FXD, an impressive, slimmed-down take on the brand’s pro diver and excellent collaboration with the Marine Nationale. This was the first time we saw the Pelagos strip back some of its features in favor of a slimmer yet no less serious form. Doing away with the helium escape valve and reducing its water resistance by 300 meters was a bold move that was met with criticism from the more hardcore spec-obsessed enthusiasts. But it was a move that opened the door for the equally lesser-specced and slightly smaller Pelagos 39 to enter. You can’t blame Tudor for not easing us into it, at least. That said, it’s not just the reduction in case size that is new. In my eyes, the 39 and all its divergences represent a new chapter for the Pelagos. 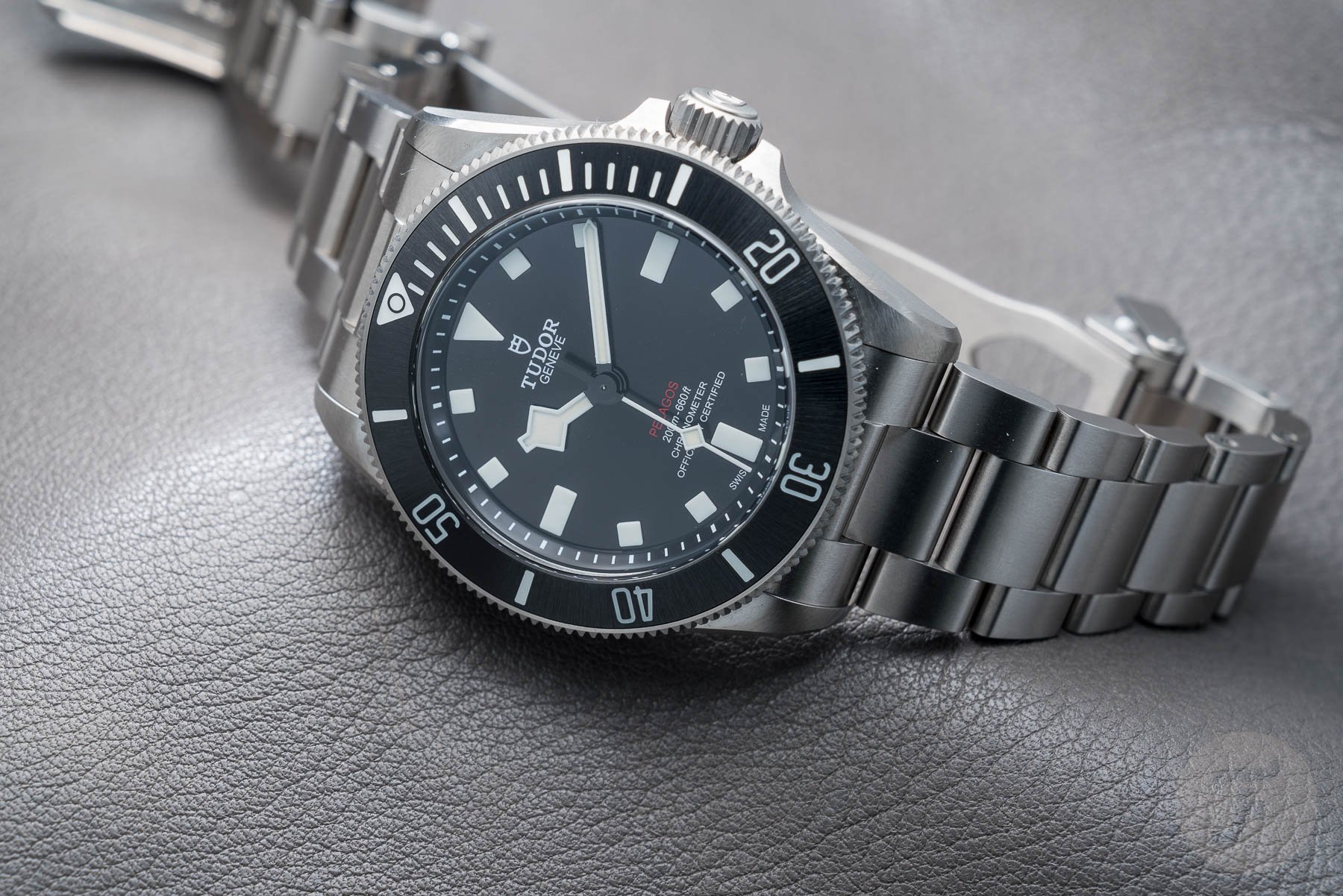 Sized down and styled up

For better or worse, things change. The thing is, change is not necessarily a bad thing. It’s how we react when faced with it that matters (at least to our subjective experience). All that is to say that I, like most of you, have an opinion on the shift in looks that the Pelagos 39 brings to the lineup. In fact, my feelings have evolved significantly this past week. Ultimately, I found that my subjective opinion of the watch was a positive one. The only sticking point was the idea introduced in the marketing surrounding the new Pelagos. Talk of “chic aesthetics” and “urban sophistication” didn’t seem right in a press release for what was previously a strictly business-only watch. It made as much sense as introducing a new Hummer, which, due to its smaller size and metallic paint, is said to be perfect for driving to the opera. 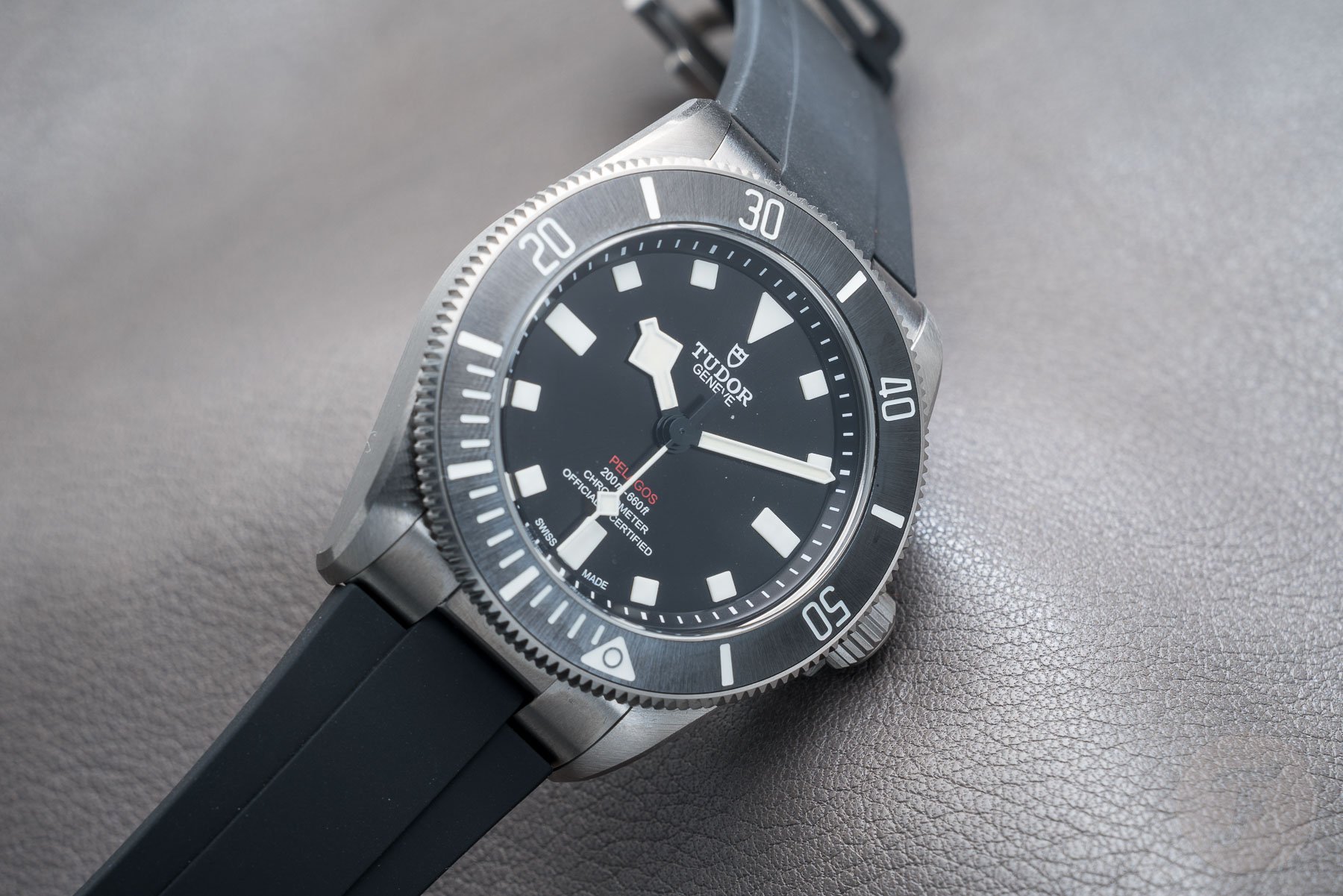 I only realized this when thinking about how much I love the Seiko SPB143, a watch with a textured bezel and a subtle sunburst dial. If this look never bothered me on the Seiko, so why should it bother me on the Pelagos? I guess Seiko just never told me what I was supposed to think of it. Sure, I’d love to see the Pelagos 39 fully matte like its predecessors, but at the same time, there’s no innovation without change. So I’ll criticize a marketing approach that betrays what the Pelagos name has come to mean to many of us. But looking past that and weighing up the watch for its own merits, I can’t help but enjoy the new take on a watch that in just one decade has deservedly earned its spot on the Mount Olympus of professional dive watches. 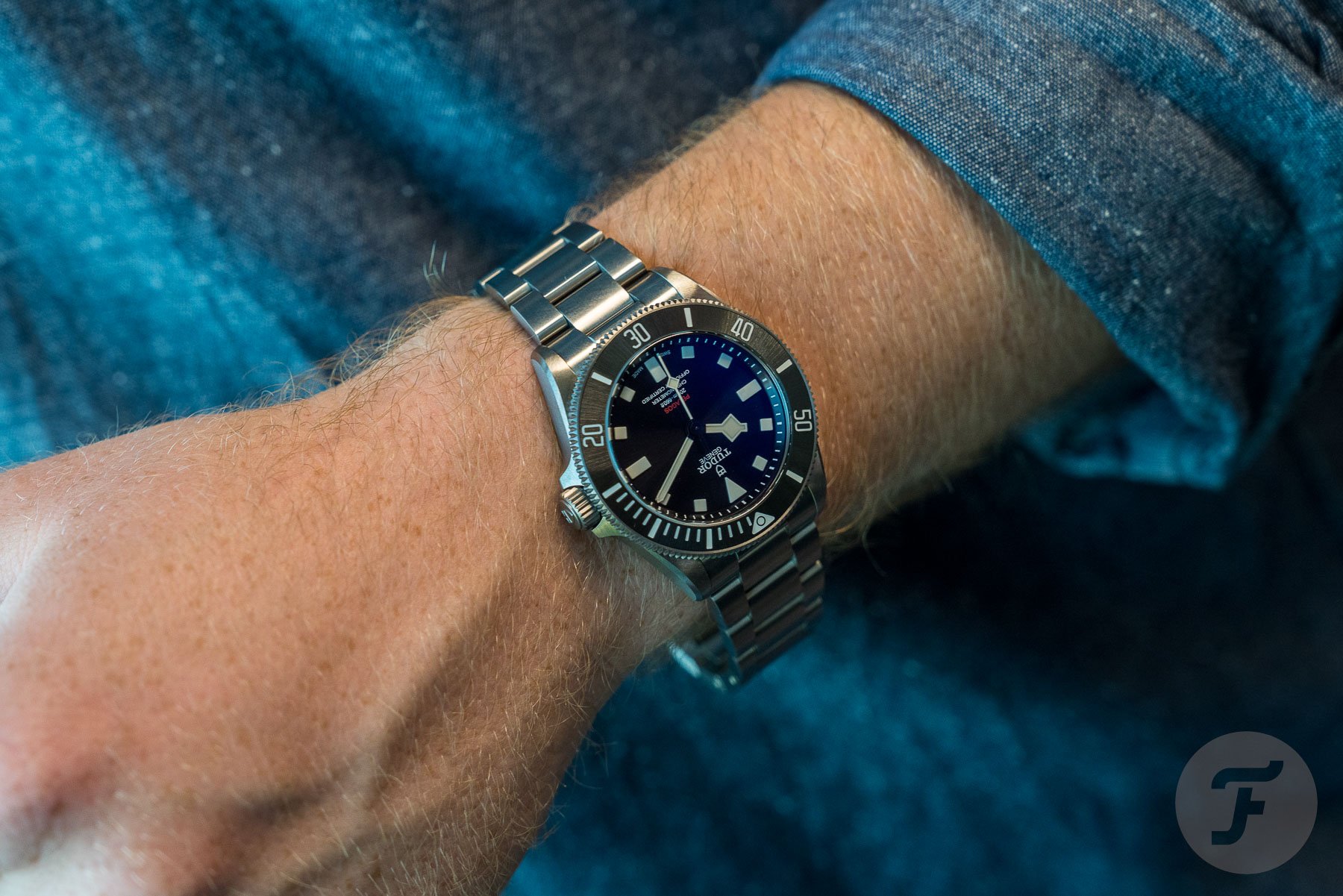 The new Tudor Pelagos 39 on the wrist

Now that I’ve talked “a little bit” about my feelings on the Pelagos, let’s get into the watch itself. How does it wear? How does it feel? What’s new? What has been improved? And finally, what do I wish hadn’t been changed? Let’s start with wearability. The dimensions of the new Pelagos 39 tick all the boxes, hitting the sweet spot size of five-digit Rolex models. It’s also where the Black Bay Fifty-Eight has reigned supreme for years now. With a 47mm lug-to-lug, the Pelagos 39 is 1mm shorter than the Black Bay Fifty-Eight, adding to its wearability. It’s also 11.8mm thick instead of 11.9mm thick, a minimal difference but a change in the right direction. One last thing to note is that the bezel measures 40mm in diameter, sitting slightly proud of the 39mm case. Inside that case is Tudor’s COSC-certified manufacture caliber MT5400 with a 70-hour power reserve. 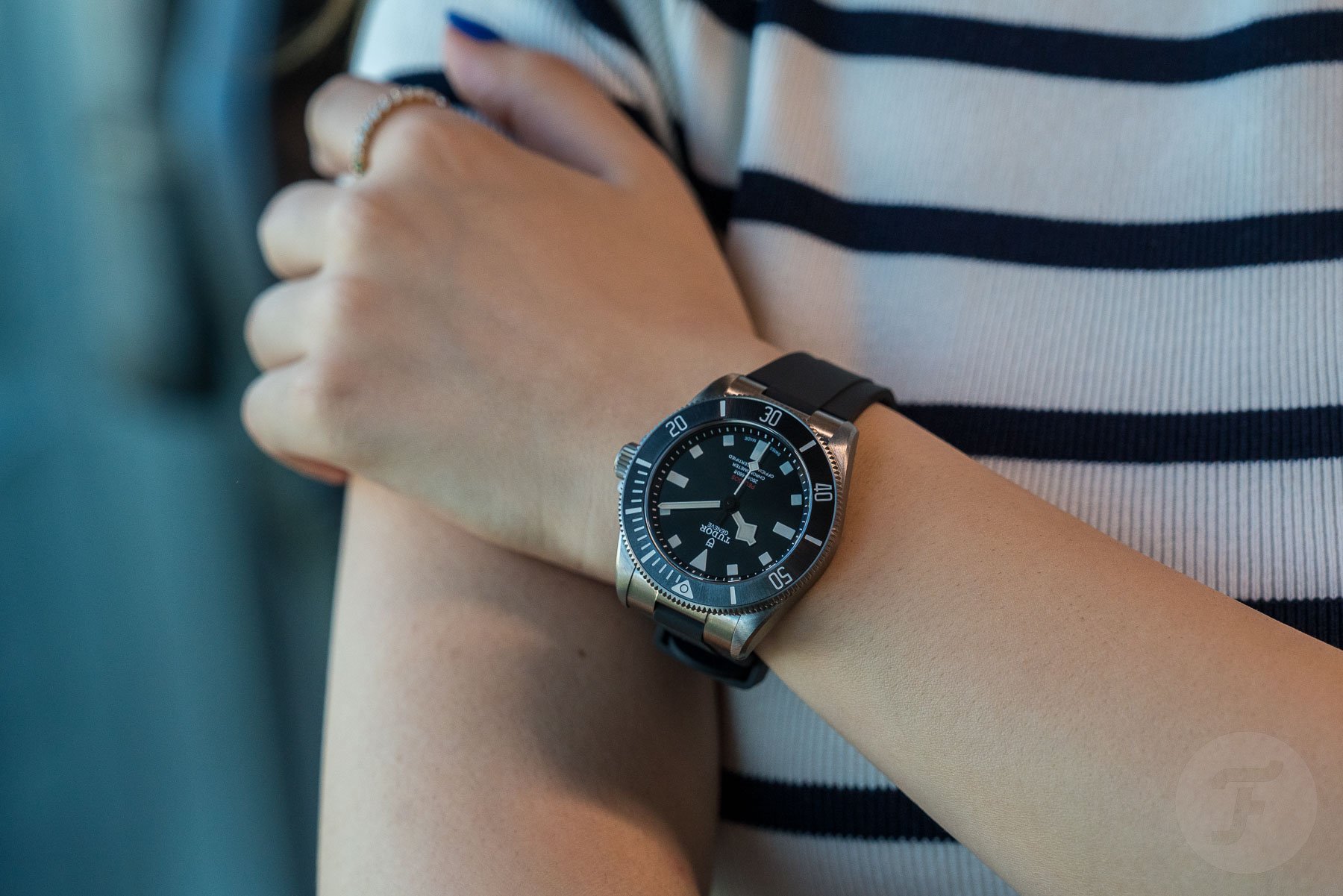 On the wrist and coupled with the light weight of the Grade 2 titanium, the Pelagos 39 improves on the Black Bay Fifty-Eight’s attempt at perfection. This watch sits just how you wish every other watch would sit. I’m aware that the lightness of titanium is not for everyone. Some say it feels a bit flimsy or plasticky. But nothing about the Pelagos feels insubstantial. The tolerances are what you might expect from Tudor. And despite its lack of weight, it’s not lacking in substance. The red “Pelagos” text on the dial is a nice touch, harking back to the Pelagos LHD. The one thing I wish hadn’t changed is the rehaut, which wrapped nicely around the hour markers on the original Pelagos. I suppose it was a matter of how it scaled down, but I’ll miss it nonetheless. 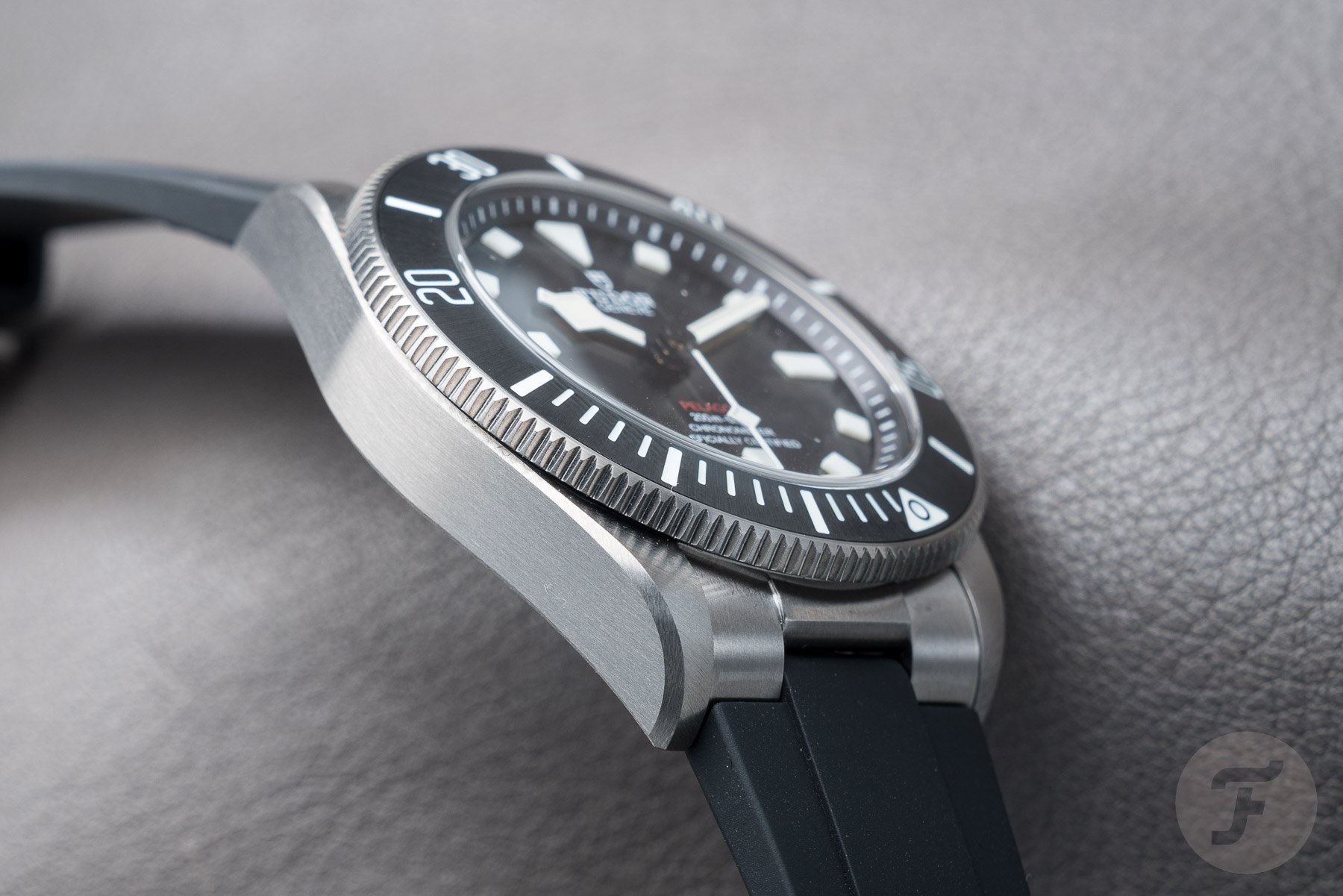 Anything more is just overkill

Other than losing the signature rehaut of the original Pelagos, there’s one last thing that I wish hadn’t changed. I’m referring to the lug width of the Pelagos 39, which has been reduced from 22mm to a non-standard 21mm. If you’re anything like me and you own an amount of NATO straps that threatens to put your relationship at risk (most of which are 20 or 22mm wide), this is a bit of a pain. Yes, there are plenty of 21mm NATO straps out there, and the bracelet (equipped with the T-Fit system) is so good that there’s almost no reason ever to take it off. So no, the lug width is not a dealbreaker. Still, it’s always hard to understand why brands do this (I’m looking at you, 19mm specialists Longines and Tissot). Besides that, the lume and the finishing on the case and bracelet are excellent.

I mentioned the dial and bezel earlier, but it’s worth putting this down on “paper.” The texture on the bezel is beautifully applied. It adds depth and a little bit of charm to the Pelagos 39. The dial is as subtle as most of us would like it to be. Some people like sunburst dials. I think that there’s a time and a place for them. The effect here doesn’t become overbearing. There’s a sort of matte sheen over the sunburst texture. And in anything other than harsh, direct light, the dial remains dark and moody enough to make the 42mm Pelagos proud. Like on the FXD, water resistance comes in at 200 meters, and there’s also no HEV. For most of us mere mortals (even those of us that enjoy and practice scuba diving), this is more than enough, and anything more is just overkill. 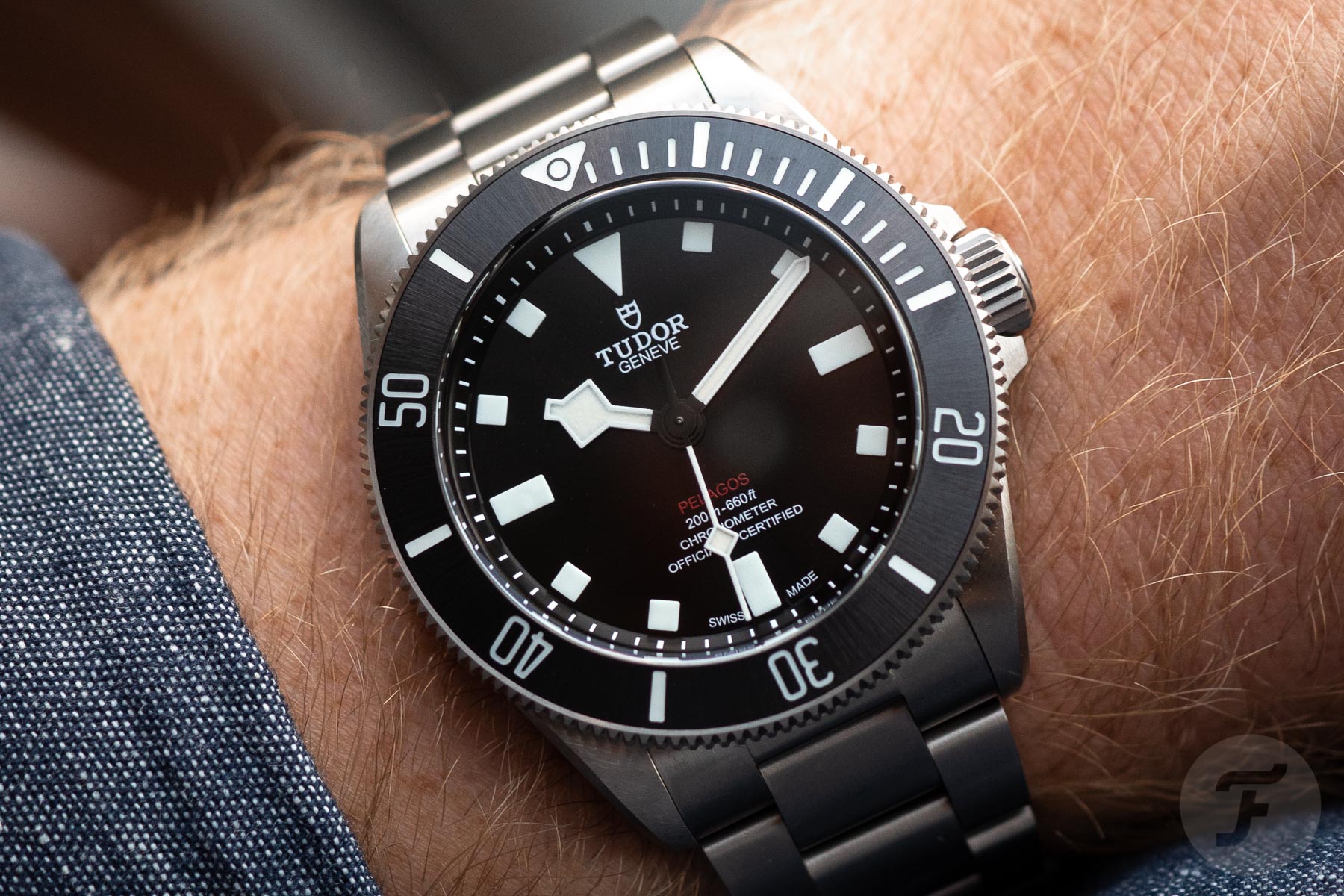 When a brand like Tudor creates a new version of a watch with a name that’s been around for a decade, it’s hard to leave the luggage at the door. But ultimately, when I ask myself whether or not the Pelagos 39 holds up on its own, the answer can’t be anything other than a resounding “yes.” If you want to ask whether it stands up within the legacy of its namesakes, things get a bit trickier. The answers to these questions only have subjective answers. When a new watch comes along, much like change, what matters is how we react to it.

Some might criticize the Pelagos 39, swearing by the old and calling this a lesser version. For others, this will be the first Pelagos they learn about and experience. Having seen both the old and the new in person, I can honestly say that the new Pelagos is a watch worthy of that name and everything that it means.

Plus, whereas the 42mm size of the old model (coupled with its height) made it one for the larger-wristed among us, the 39mm version opens the door to a whole new crowd of Pelagos lovers. Whether chic and sophisticated or a bit more on the rugged side, it doesn’t matter. The point is that we should all be able to enjoy all watches out there, especially those that make us feel something. If the new Pelagos 39 allows a group of people who would have previously not dared to embrace the magic to enjoy it, it should only be celebrated.

The Tudor Pelagos 39 is now available for €4,170 (US$4,400) on the titanium bracelet and includes a complementary rubber strap with a diver’s extension. As always, let us know how you feel about this release in the comments.

Hot Topics
Introducing: The Omega Speedmaster Super Racing With Spirate System
149 comments
Design Vs. Specs — Which Is More Important To You When Buying A Watch?
85 comments
The Updated Bracelet For The Omega Speedmaster Professional 3861 — Here Is What’s New!
51 comments
Introducing: The New Cartier Tank Française
49 comments
The Time To Buy Is Now: How The Current Economic Climate Influences Watch Buying And How You Should React
48 comments
Popular
(From The Archives) Shut Up & Read The Truth About Cartier Watches
George Cramer
21
Rolex Submariner Hulk versus Seiko SLA019 : Shades of Green
Michael Stockton
29
#TBT A Vintage Seiko Buyer’s Guide to Affordable Goodness
Michael Stockton
32