Hands-On With The Nezumi Voiture VQ3.201 Chronograph — A Meca-Quartz Classic?

When does a young brand transcend its status as a microbrand? After more than ten years, Stockholm-based Nezumi Studios ticks all the boxes with ease. With some racy collaborations to its name including Porsche-tuning icon Ruf, Nezumi has become a small brand to inspire others in the genre for sustainable growth. At the same time, while introducing new watches to the collection, the Voiture Chronograph has evolved slowly but securely. Still retro-evocative but mature, I go hands-on with this Nezumi Voiture VQ3.201

The Voiture is the original and first chronograph from the 11-year-old design studio’s horological debut in 2015. It is a testament in itself to see the same model with the same design and case having become a small brand classic. After the rather-tempting 10 Year Anniversary model with its mechanical movement made it to the market earlier year, is the allure of dependable meca-quartz still enough to entice the fans? With the Voiture now both a regular-stock item and subject to cool collabs, it would seem so. But does its maximalist motorsports vibe only match denim shirts and roughed-up leather jackets, or is it actually quite versatile? 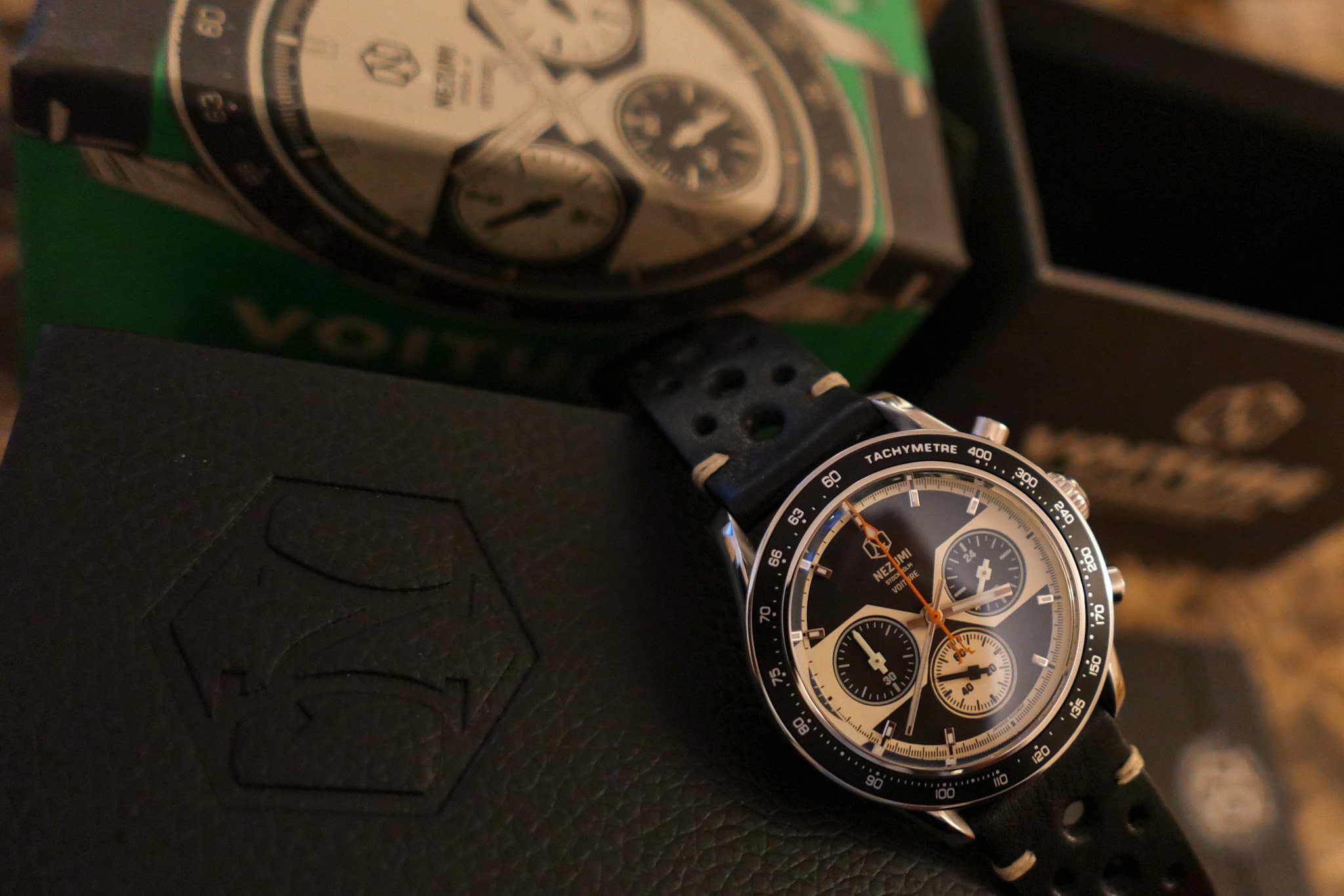 Nezumi Studios got me at the packaging

What a boring headline, eh? And yet, it’s so true. If you’ve perused eBay and auction sites, you will have seen the faded colors of NOS (New Old Stock, dude) watch boxes from the ’60s and early ’70s. The Voiture VQ3.201 comes in a perfect replica (sans the flimsy nature) of its inspiration. The apple-green cardboard box has a premium matte finish and immensely solid quality. With a sharp, period monochrome print of the chronograph and retro text in a studied font. The leatherette inner box is another quality touch, solid and with an embossed logo, big kudos to Nezumi. Sometimes eschewed even by much larger brands, I find packaging essential for that first feeling of quality and, in this case, a warm nostalgia. 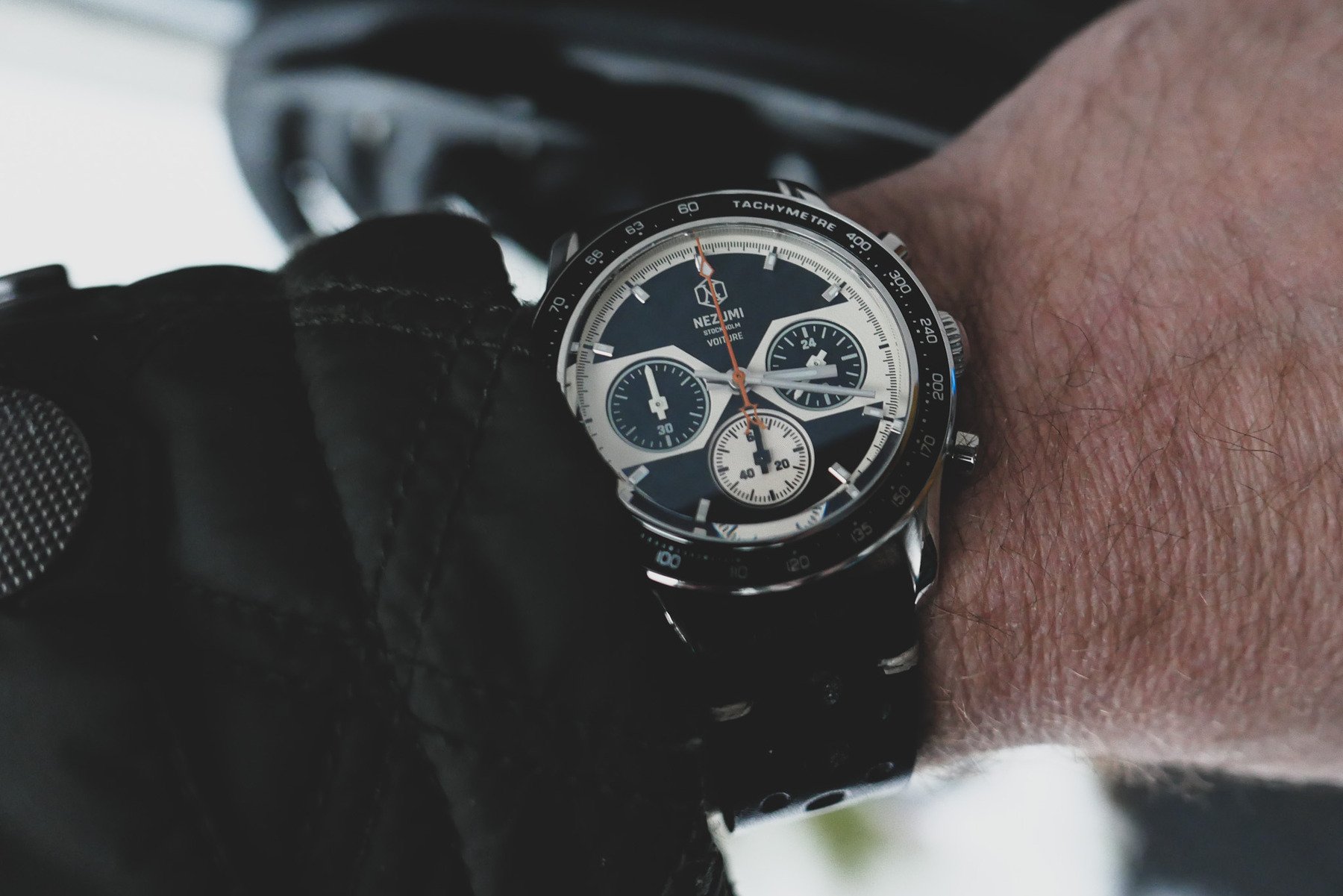 First impressions on the wrist

Is it versatile? Well, that is an easy “yes!” The 40mm case seems almost large these days, but the magic tip-to-tip lug length of 47mm is perfect. The slim Seiko VK63 meca-quartz means that the case back protrudes insignificantly. Yes, there is no hiding the fact that the lyre lugs have a distinct touch of Speedmaster about them, but brand founder and designer David Campo knows his ergonomics. The ends curve down dramatically with a sweep of a polished bevel, making for a wrist-hugging shape. This is, as far as I know, the third evolution of the Voiture, with a svelte 11.25mm case under a 1.75mm AR-treated double-domed crystal. Nezumi has also gone for a drop-dead gorgeous sapphire design with, instead of the usual retro box shape, a slight dome with a broad bevel. This means yes, the looks are Le Mans-racing tough, but its slim shape will slip under your business shirt. 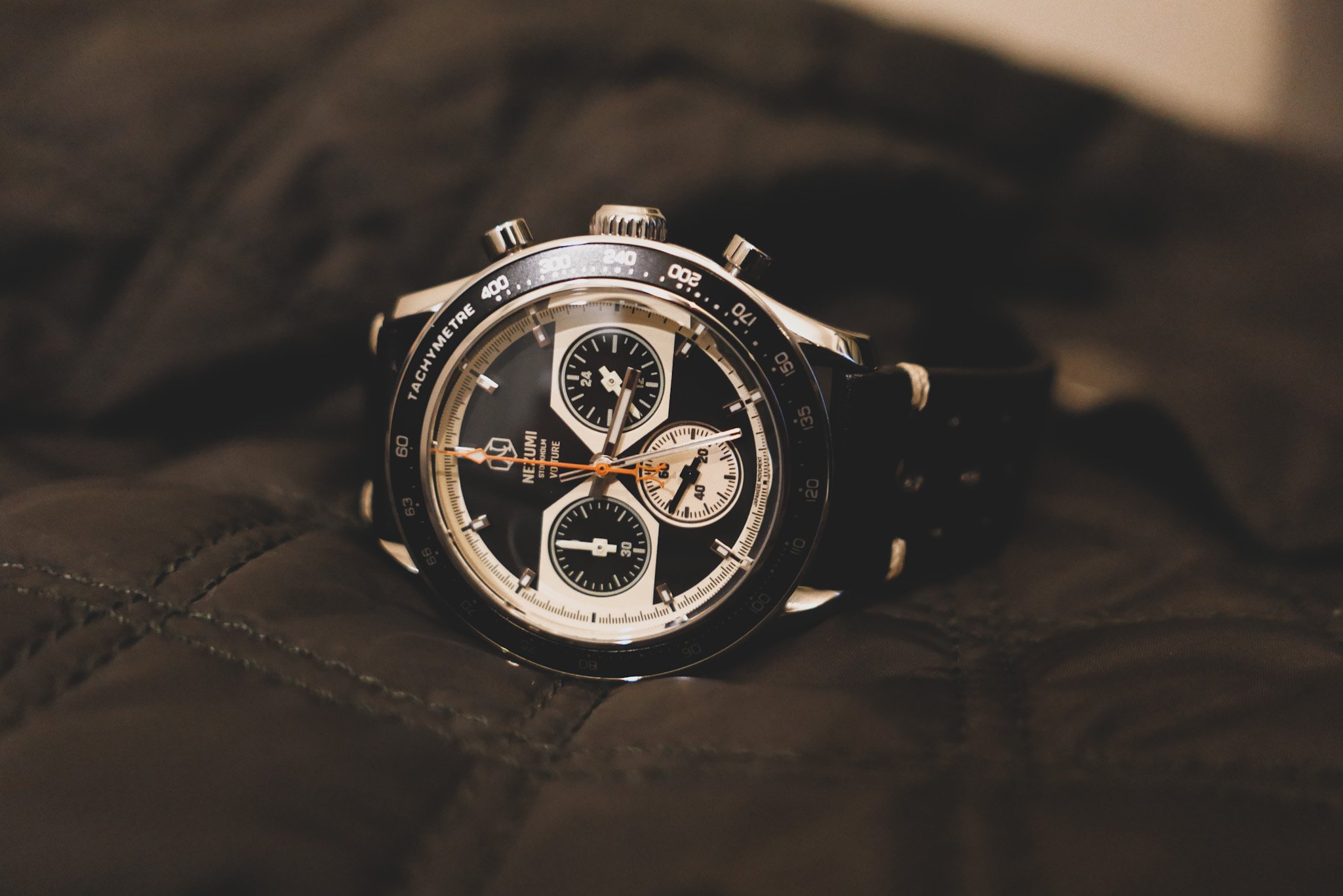 A daily driver with ambitions

So the Nezumi Studios Voiture chronograph has a svelte and distinct vintage vibe. What about that maximalist dial? This is where the action is, for sure. It is motorsport-infused like race day in 1973 at the 24 Hours of Le Mans. The vintage-Porsche-collecting background of David Campo shines through in every detail, starting with the Rindt rally strap. I have a petrolhead past, so naming a strap after the famous Porsche driver Jochen Rindt is thought-awakening. Its soft embrace brings as much vintage inspiration to me as the Zorro-esque dial geometry. The first time I saw the dial some years back, I felt it was too symmetrical and way too busy. But the best albums are the ones that don’t catch you from the first listen.

What did this week with the Nezumi Voiture VQ3.201 bring me?

Delight, pure and simple. And a compact wrist presence with a strong-enough personality makes me enjoy this equally as much as Swiss watches at ten times the value. Campo’s sharp eye allows us to feel a deep inspiration from vintage Breitlings, Speedies, and Heuers — it’s a vibe. The Nezumi Voiture is firmly placed in the golden heyday of motorsports but plays its own game. And it’s not a game of chance. Time has given the Voiture a following and a studied feeling way above its sub-€500 price point. From the polished frames of the tachymeter bezel to the sharp print of the moody cream-and-black dial, everything has its place. 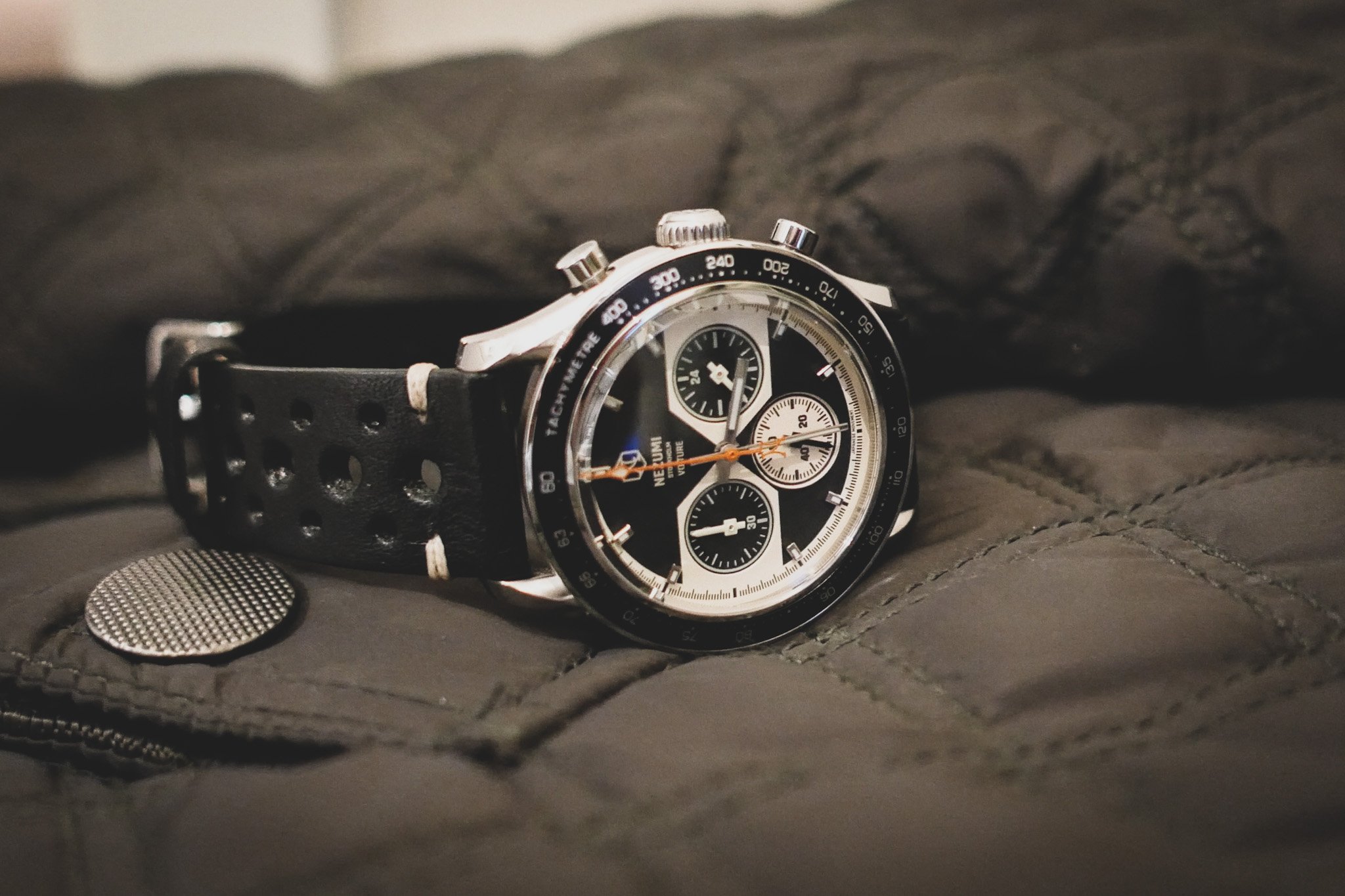 Take something seemingly simple like the bezel insert in aluminum. For the vintage-feeling tachymeter, David Campo hand-drew the scale, scanned it in low resolution, vectorized it, and added it to the technical drawings. This was done to recreate a vintage printed look. Checking it with a loupe, you’ll see that no two numbers are the same. This third evolution of the Voiture 201 has only slight touches tweaked, like a color tone here and there, a redesigned crown, and “Sweden” removed from the dial. If it ain’t broke, don’t fix it (and yes, I have been seriously impressed, David!). 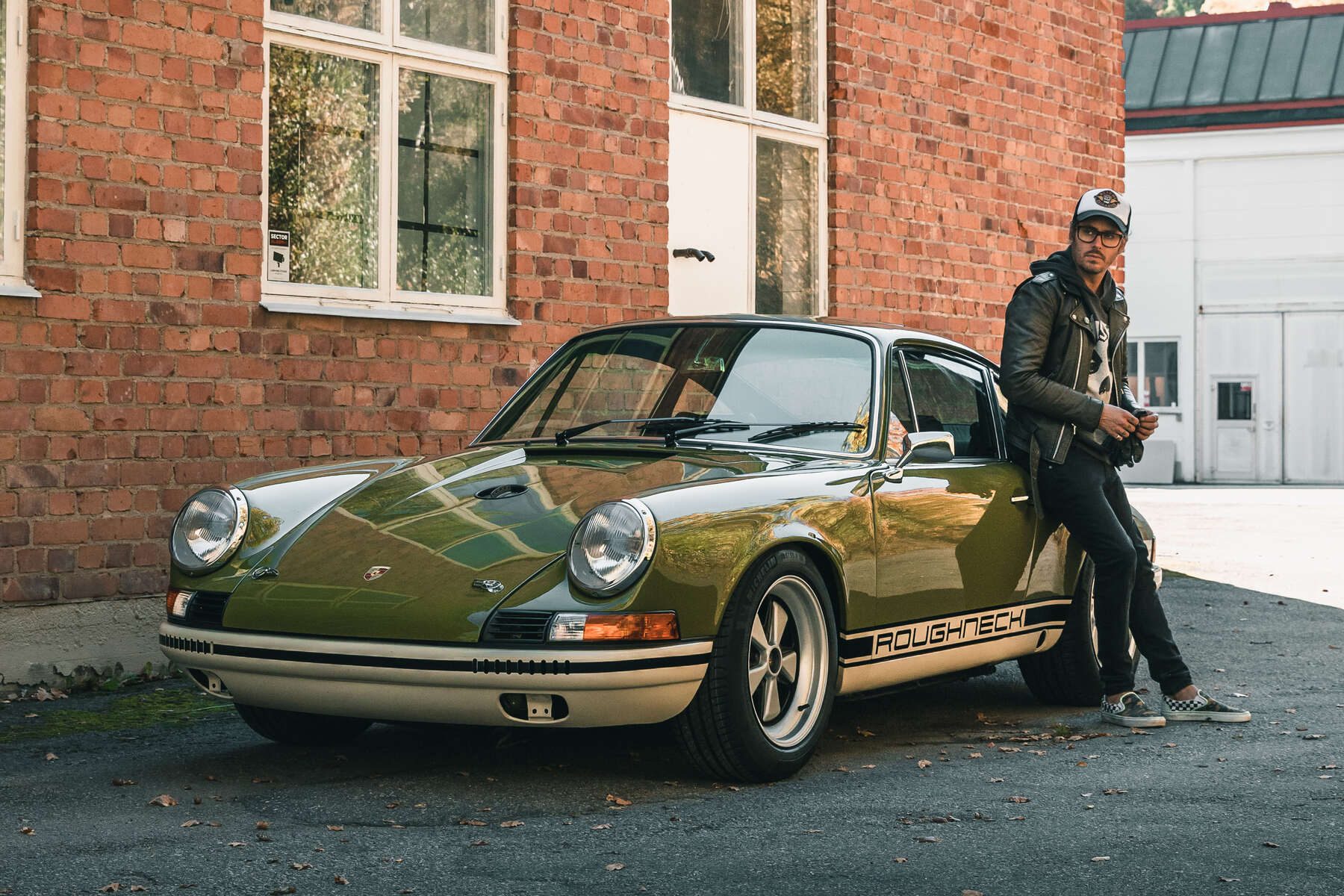 Where is Nezumi going?

I ask David Campo about his brand’s journey. He told me, “It’s been a mixed bag as with all businesses. I ran the brand for eight years by myself; from product design to supply chain, photography, sales, distribution, you name it… That took its toll, but it’s been and still is a fun ride, and we are growing by the minute. We are now a great team at the Nezumi HQ which gives me more time to focus on the creative parts of the brand.” And in my eyes, it shows.

In regards to the future, David told me, “…beyond the horizon are fun collaborations and new watches like an automatic GMT. We’ve only just begun.” On that note, I’ll mention the Voiture’s finishing touch — a trademark of the brand, the fresh orange seconds hand. Its arrow-shaped tip and elaborate, skeletonized Nezumi logo are still fresh as they were on day one. A small but studied part of the Nezumi identity, it helps makes the price of around €320 from Nezumi Studios a knock-out value.

So, am I right in being ever less of a movement snob than I used to be? Or are some of you still mechanically monogamous? Let me know in the comments, Fratelli.