Hands-On With The Revived Orator Sportsman

Any vintage-watch nerd remembers the Orator Sportsman. I guess it’s partially because of the vigorous “diamonds” bezel that would make it a perfect watch not only for divers but poker players too.

When I shortlisted it among the top 7 vintage watch bezels that would never be made today, I had no idea it was in the making already. Technically, it’s done today, but it is “just” a reinterpretation of the famous predecessor. When I got a message a few months ago from Christian Schmitt, one of the brand’s refounders who decided to raise Orator from the ashes, I was instantly in. Christian sent me prototypes for both versions of the revived Orator Sportsman, one with a blue dial and another in full-black attire. 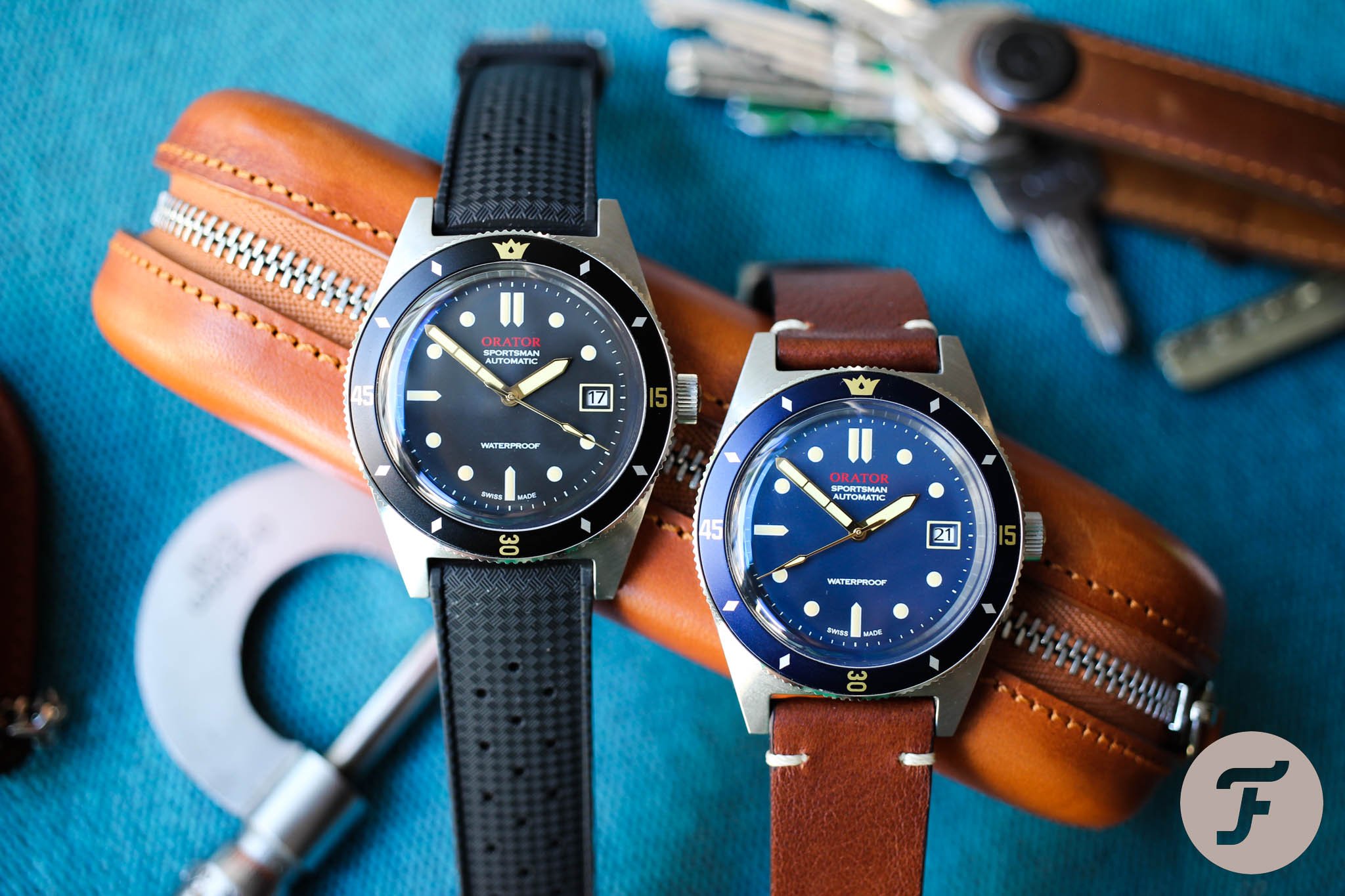 The bezel of the Orator Sportsman

Try to guess what I did right after the Orator watches arrived. I completely forgot about the dial and the case, that’s what. My eyes were glued to the bezel. I rushed to strap it on because I wanted to feel how the bezel worked under my fingers. The pressure you need to apply to get it rolling is about right, and it’s almost perfectly precise. The bezel sits tightly; it’s neither loose nor stiff. Only in some cases when you “overshoot” it will the bezel slide back a tiny bit back to lock into the tooth.

Having 120 clicks on a CNC-milled stainless steel bezel means that you can adjust it in half-minute increments. It’s a nice feature, but not sure about its practical use in daily life. I thought that half-minute positions would be easier to use if the bezel (at least the first 15 minutes) were marked in minute intervals. Alignment with a minute track on the dial would be faster. Anyway, it’s just an academic thought because the bezel is perfect as is. The rather sharp edge is easy to grab. The handy and flat skin-diver lugs will allow you to rotate the bezel even more comfortably. 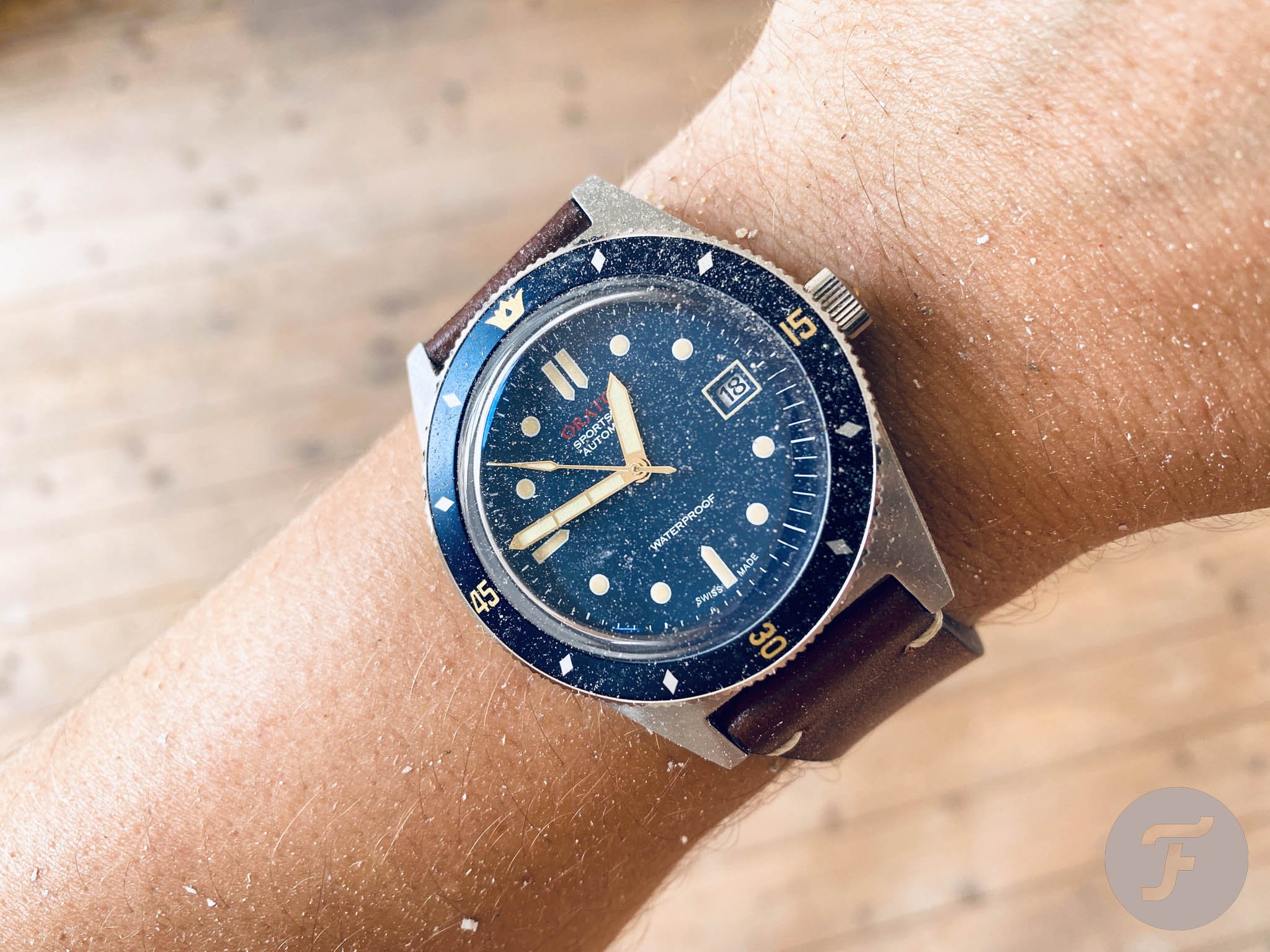 The dark matte black aluminum insert looks as honest and true as you would expect from a vintage-inspired dive watch. It sits in its position well. I would only challenge the super-tiny gap between the edge of the bezel inlay and the bezel itself. I did not notice it at first, but over the days when I took it on some “dirty” trips, I found some microscopic dust particles settling down in there.

No big issue, as many won’t even notice, I guess. As the picture above suggests, I didn’t just pamper the Orator Sportsman behind my desk, but instead, I showed it some “real” work. “Do whatever you need to do,” said Christian when I asked how far I could go with the testing. I liked even more how he responded to my observation about the bezel-inlay gap. “That’s the feedback we want to hear. It’s a prototype and this detail should be an easy fix for mass production.” 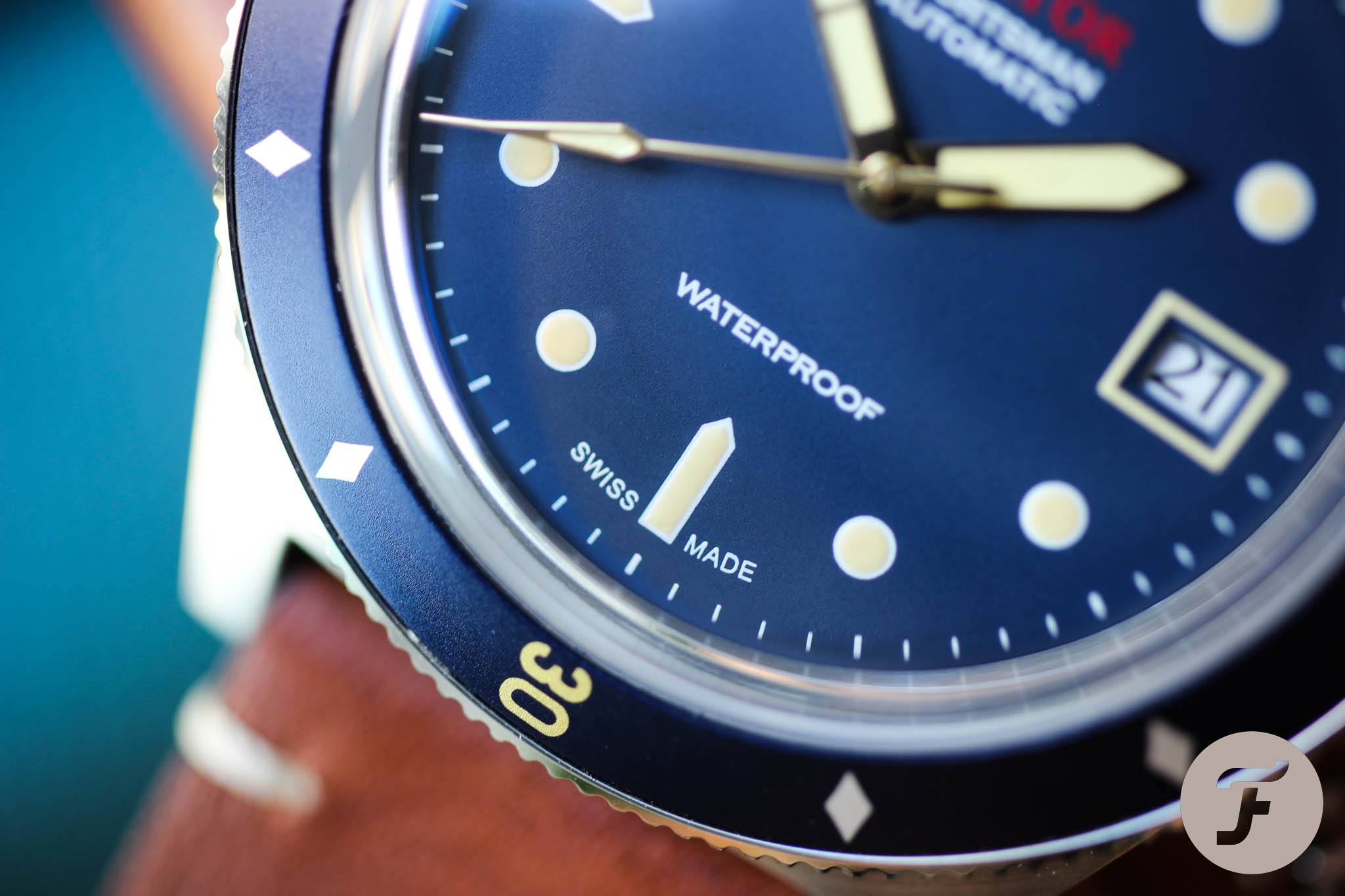 The king of all bezels

From a visual perspective, you get one of the most interesting bezels out there with the Orator Sportsman. Honestly, Christian and his partner Hans could open a second business and sell bezels alone as necklaces or keyrings. This bezel is so individualistic, so different. I tried to dig deeper to find out why there is a crown symbol instead of lume pip, but I ended up being Jon Snow, knowing nothing. 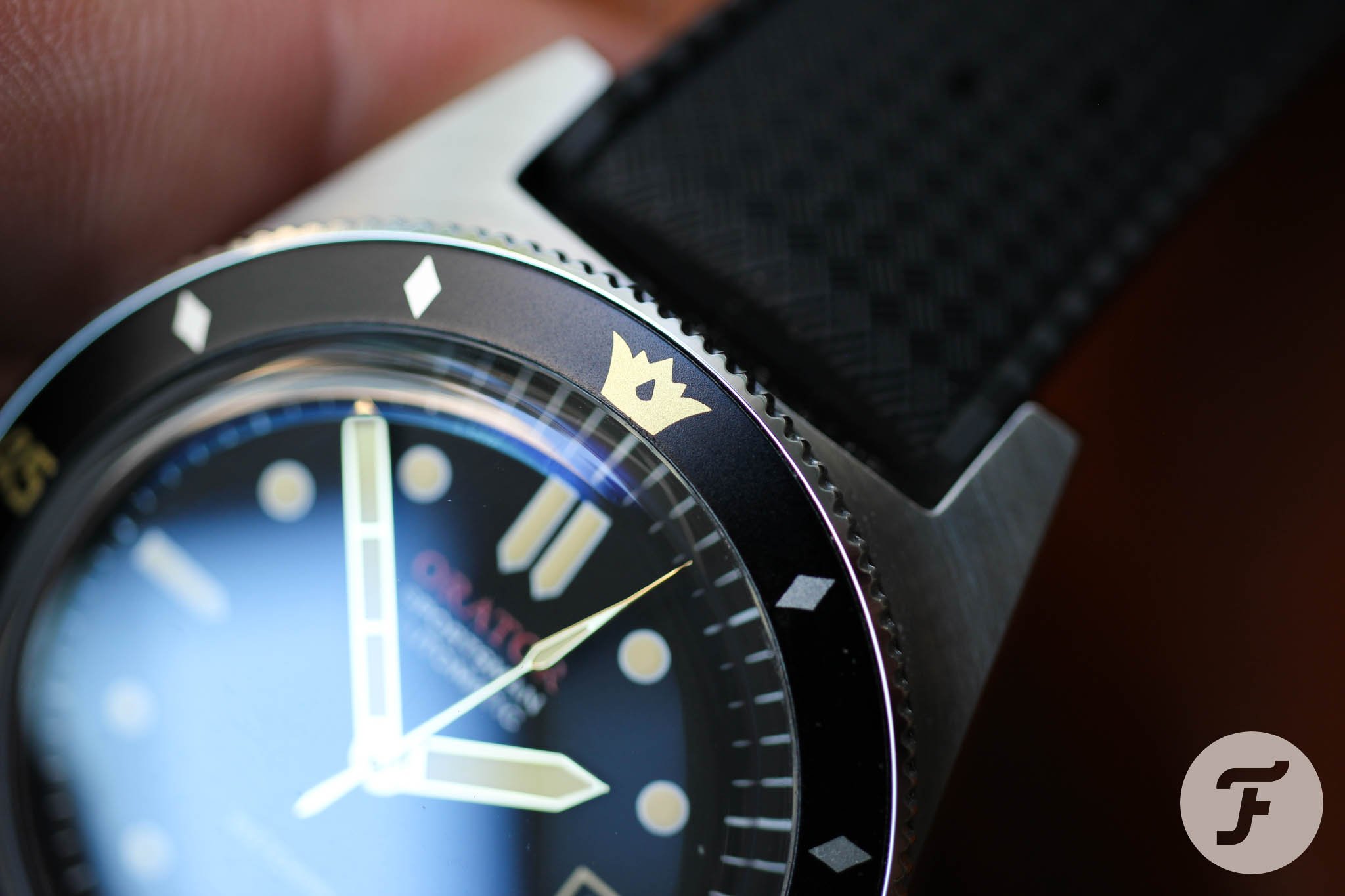 Besides the crown symbol and the crazy rotation of the 15, 30, and 45-minute marks, you get eight diamond symbols instead the rest of the numbers or hash marks. The diamonds’ needle-thin tips aren’t any thicker than the minute track on the dial. I have to say they serve the purpose of tracking elapsed time elegantly. On top of that, the diamond shape gives the entire watch an unusual jewelry-like touch. That mix of diamonds and a hardcore, technical font on a skin diver plays with your brain so effectively that you would be surprised.

A note on colors

I am not a fan of bimetallic watches. Since the unexpected landing of a Cartier Santos, I softened my narrative, but I am still not sure about that. I kind of like to keep precious metals separated. It would be an exaggeration to call the Orator Sportsman bi-metallic, but both the hands and the bezel are gold PVD-plated. I was reluctant, but it grew on me over a month on and off my wrist. 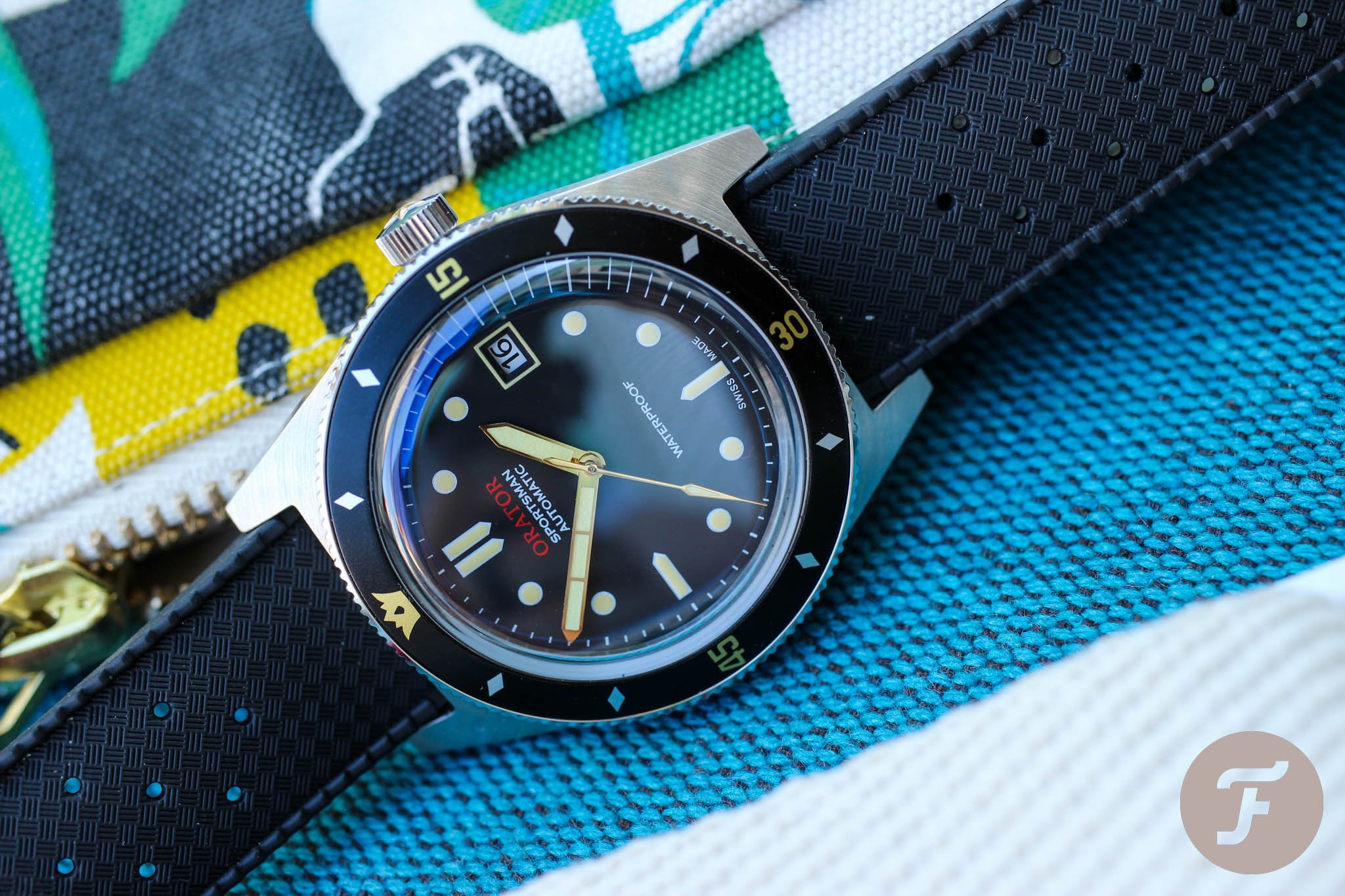 The font color on the bezel especially won me over. I wasn’t even sure what to call the color, so I asked Christian to elaborate. “Due to the different material and the matte finishing of the bezel and the shiny finishing of the hands, there is a slight difference. In mass production, the color of the bezel numbers will be the same as the hands’ color.” Well, from what I see, there is a major difference. The bezel’s tone feels more brassy and slightly darker. Other than “premium” and “slightly mysterious”, I can’t find better words to describe it. I raise both hands for the matte finishing that we see on the bezel to make its way to the hands for the final production series. Let’s see!

I went to the countryside, which involved multiple half-day hikes and a few days of reconstruction work on an old house. Whether painting walls or sanding windows, I kept Orator Sportsman on. With a 40mm diameter, it’s slightly pumped up compared to its grandfather, but it makes the Sportsman a pretty contemporary watch. The rather flat and slim case wears feels very comfortable and light, but it doesn’t disappear on the wrist. On the contrary, it feels like the biggest skin diver I’ve ever had, but not so big that it loses that skin-diver feel. If you’ve ever had a vintage skin diver, you’ll know what I mean. 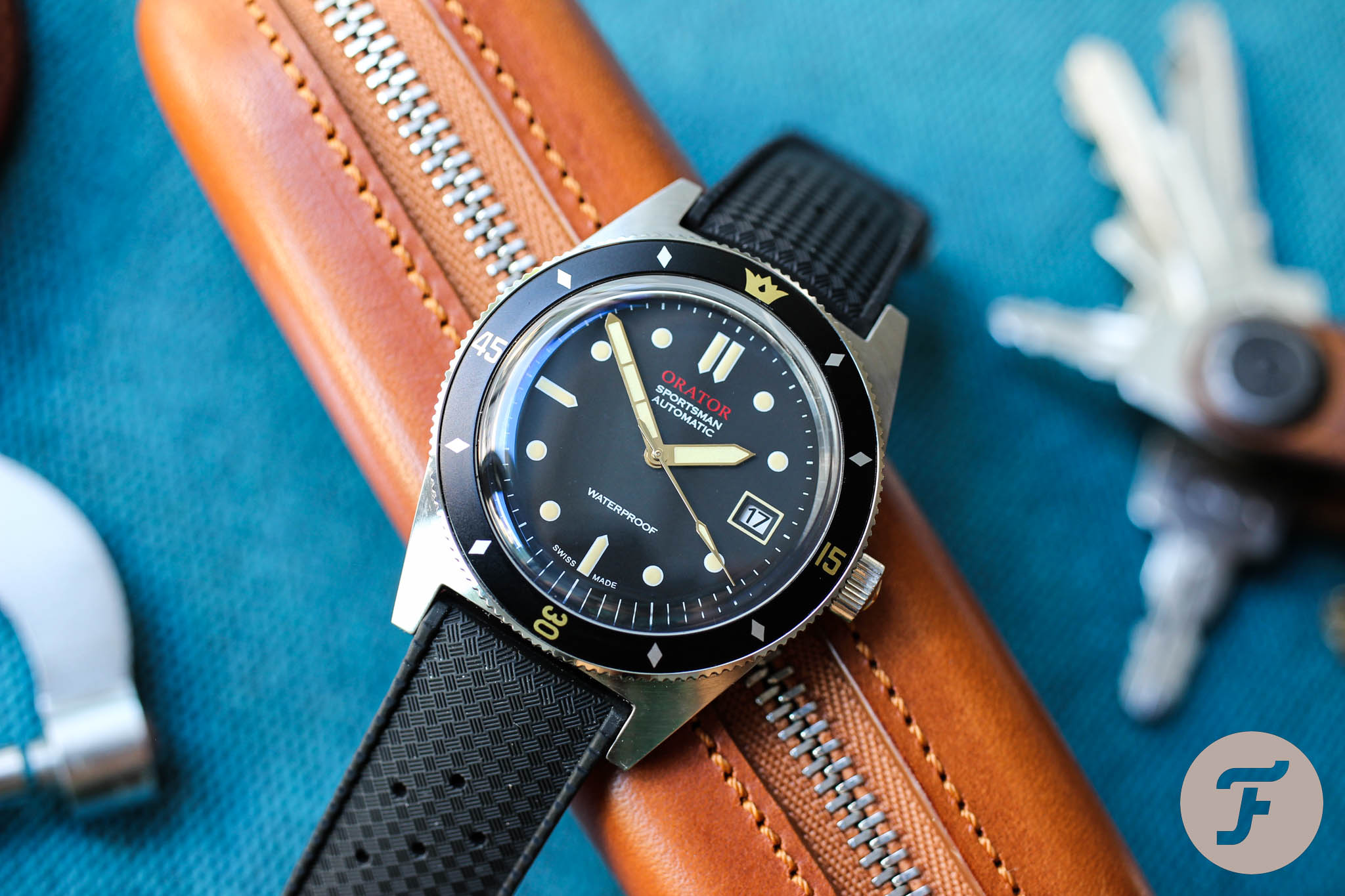 When I read that it has a Ronda automatic movement, I didn’t know what to think. Ask me what brands are using Sellita, and we can open a wine bottle to it. But ask me about Ronda, and there will be an awkward silence. I even called my watchmaker to ask him how he felt about the Ronda R150. He hasn’t had any on his bench yet.

There has been a lot written about Ronda’s first mechanical automatic movement on watch forums, but we are here to share our own experience. We can’t argue that huge production volumes and constant improvements have strongly impacted the quality or perfect tuning of this movement. Ronda has not made a major breakthrough with some relevant watch brands; that’s a fact. Another fact is that this movement did not start ticking right after I put the watch on my wrist. The rotor seems a bit lazier than what I am used to, and the Orator needed a strong push to get it running. But that is not a big deal because once the watch has stopped, you set the time and give the crowns a few winds anyway. Otherwise, all works fine and reliably. 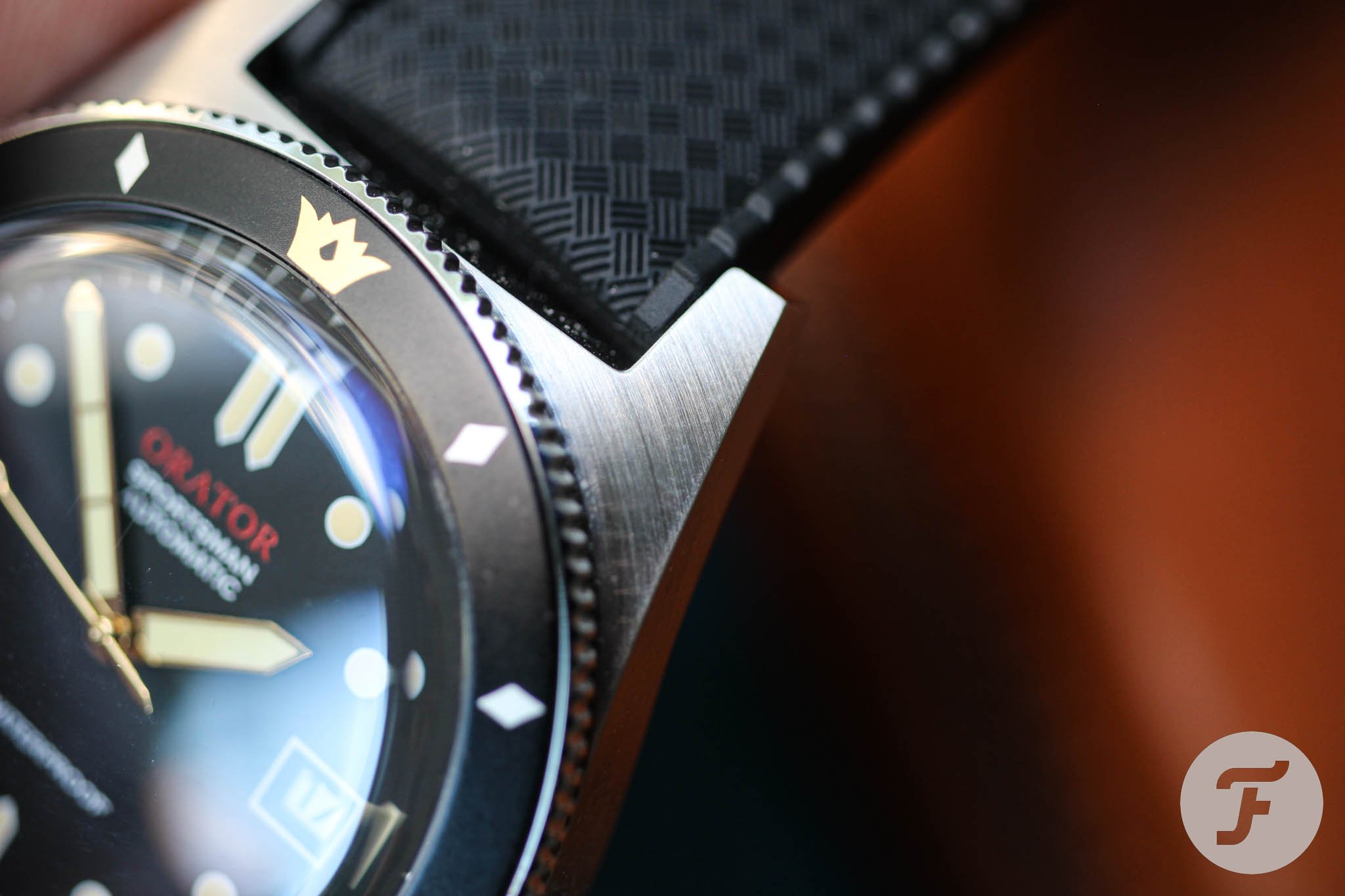 As the days passed, my reticence and uncertainty towards the Ronda movements changed completely. I have had so many Sellita watches, and I often didn’t mind. It has been (and it is) just a reliable standard. What I mind now is that I didn’t use to mind Sellita’s “prevalence”. I don’t know how reliable the Orator with the Ronda R150 and an Orator-decorated rotor will fare in the long term, but I am willing to try it. The more I wore the Orator Sportsman, the more I liked the idea of having the first Ronda R150 in my collection. This movement deserves a chance and support. 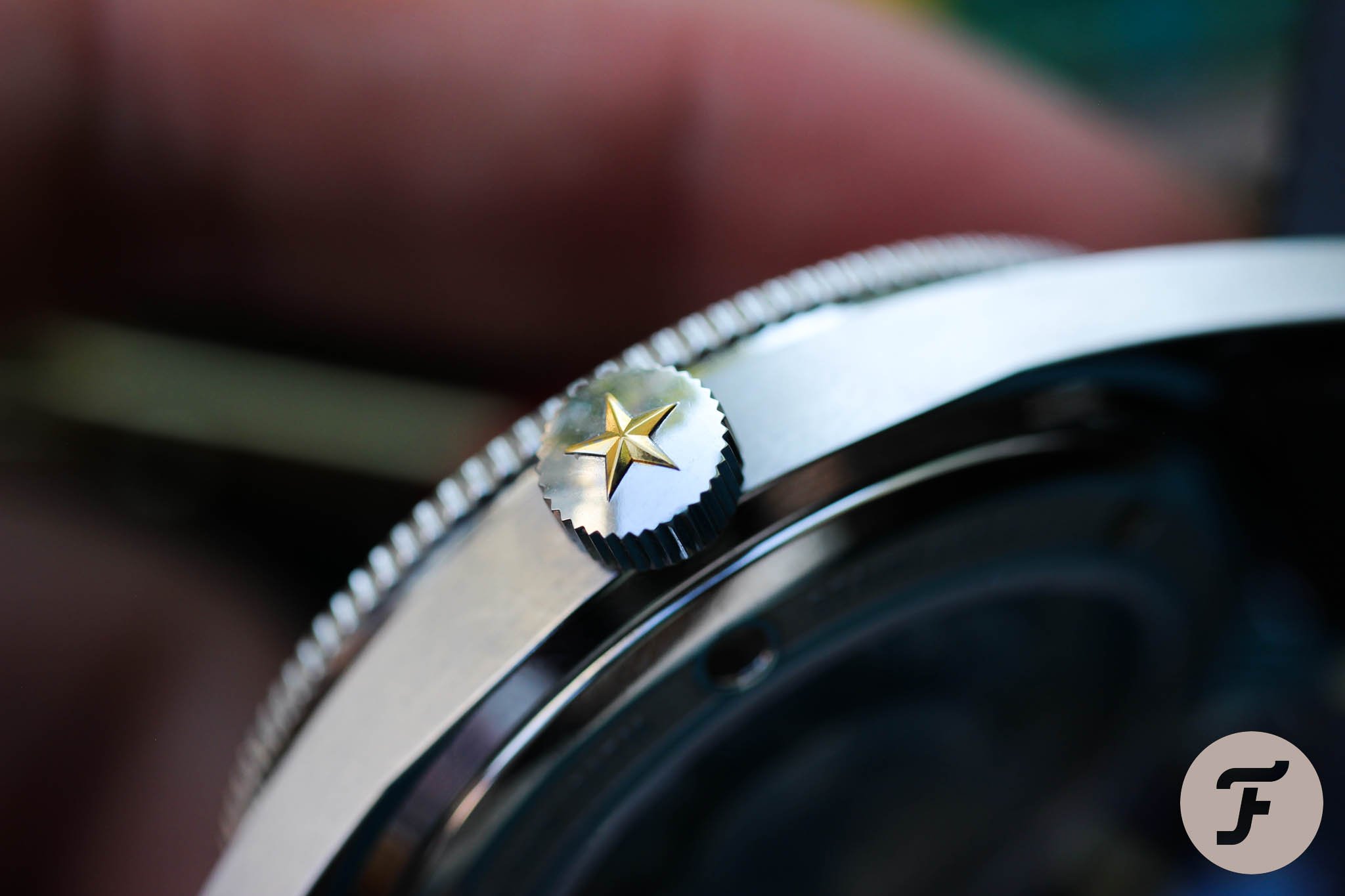 What do you see?

A crown decorated with a shiny gold star reminds us of Zenith a bit. It’s neither great nor wrong. The fact is that the crown screws down and secures 100 meters of water resistance. More educated customers might find a full-steel case back a more appropriate option than the transparent case back Orator has selected. I would too if it had Sellita. Implementing the Ronda movement, which is quite new to me, puts it in a different perspective for me. I don’t know the movement well, and I welcome an opportunity to look at it. Also, to have a transparent case back at €1,000 may be a nice bonus for many customers new to mechanical watches.

The case back itself is nicely decorated and engraved. No matter which dial color you choose, you will get it individually signed with a number from 1 to 888. Yes, the revived Orator Sportsman arrives as a limited edition. Once it’s sold out, there will be no other chance to get it again. It hits Kickstarter today, and the earliest backers can get it for €750, which is €430 less than the expected retail price. A combo of an easy-release FKM rubber Tropic strap and a calfskin strap is a nice bonus, especially in this price category. 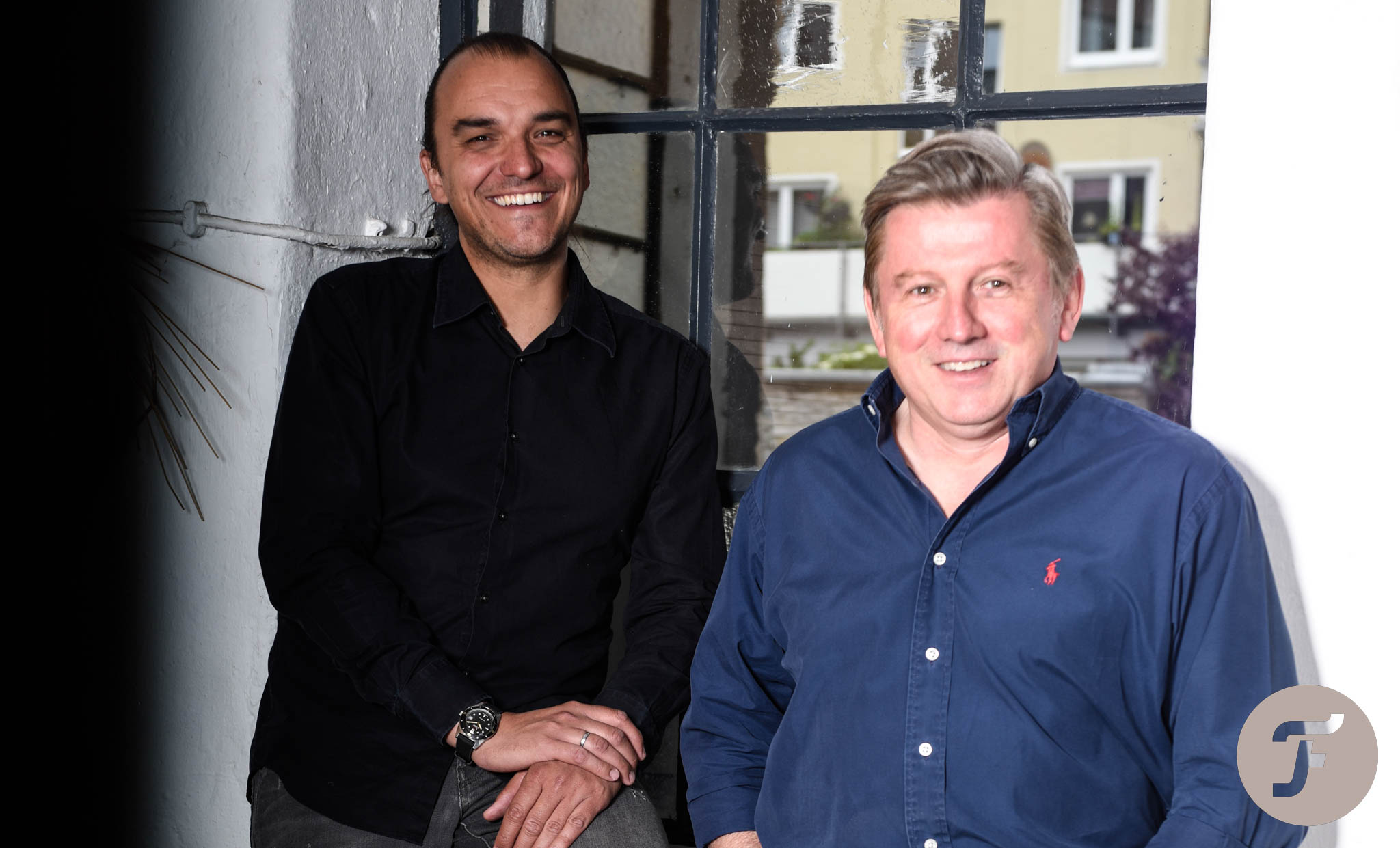 Who stands behind the new Orator?

Chris and his partner Hans Meeder are not new to the watch business. Hans has been trading vintage watches since the late ’80s. With the Swatch hype of the era, he opened several Swatch retail stores in Wurzburg, where he also met Christian. Ten years ago, they visited the watch exchange in La Chaux-de-Fonds, where they bought an Orator Sportsman. Their fascination with that “strange” bezel and the special hands set them on a journey of discovery. After successfully registering the Orator trademark in 2019, they decided to make the Sportsman their first release. After three years of development, here we are.

Orator was a brand name under Schild from around 1957. Christian and Hans found out that the first Orator Sportsman came out in 1962 as the “Date-O-Matic” for Aqua-Lung in the US. The same year, the Sportsman debuted under the brand name Orator. “The biggest companies for diving equipment in the United States in the ’60s were Voit and U.S. Divers Co. Both of them wanted to sell diving watches through their catalogs, so they had to find a watch manufacturer with high-quality diving watches, which was not that easy at that time. They found Schild with its brand Orator and Blancpain with the Fifty Fathoms. Both watches were sold under U.S. Diver Co’s brand name “Aqua-Lung”. 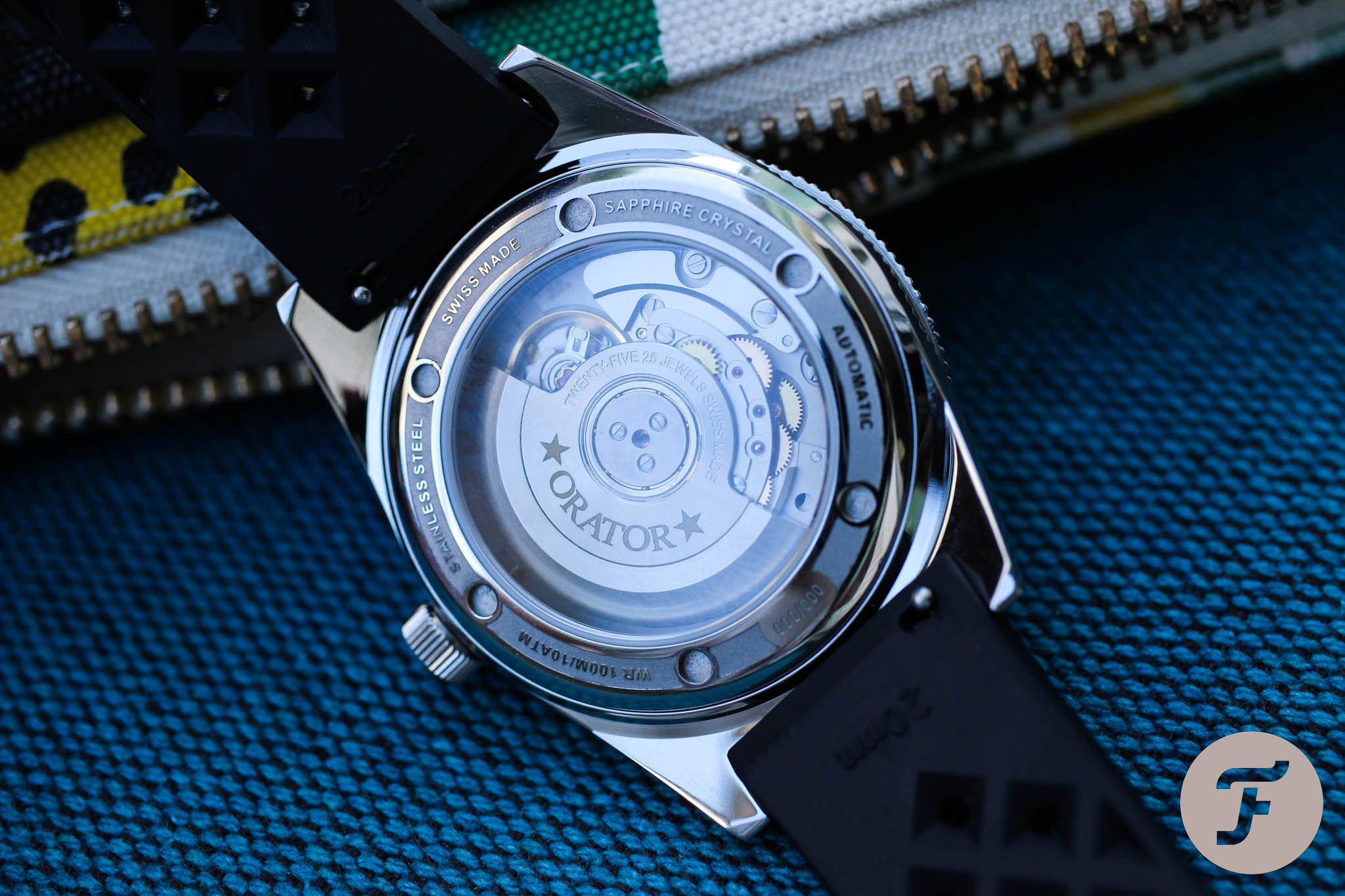 Sometimes I can’t stop wondering how many shades of black and blue I can see on a watch dial. The black Orator has that “light” matte black, almost pale look. In direct light, you might even look a bit grayish. The blue Orator is more lively, and it has that school-ink vibe. The “brick-like” minute hand is a very strong and memorable detail, and the legibility when reading the time is fantastic. I like the case back design and engraving. It looks very solid. The round holes for the case back opener are deep and nicely integrated.

The realm of vintage watches is full of surprises, and the Orator Sportsman is one of them for me. You may find another amusing detail if you google the old Aqua-Lung catalog. The Orator Date-O-Matic watch was $5 more than the Blancpain “Date-O-Matic”. Christian and Hans decided not to let the Orator be forgotten and took on an adventurous ride through the already-competitive market. Judging from what I see and the founders’ attitude to make it even better, I hope there will be many more releases from Orator in years to come.

For more information about the Sportsman, visit the official Orator website, or check their Kickstarter campaign.