When you think of Urwerk the first thing that comes to mind is their hi-tech and futuristic designs. Just one of those exotic brands that you will recognise from a mile away. And all of that right from Switzerland which is more known for its ski resorts rather than sunny beaches. Yet the name of this creation makes up for that. Time to meet the Urwerk Black Cobra. 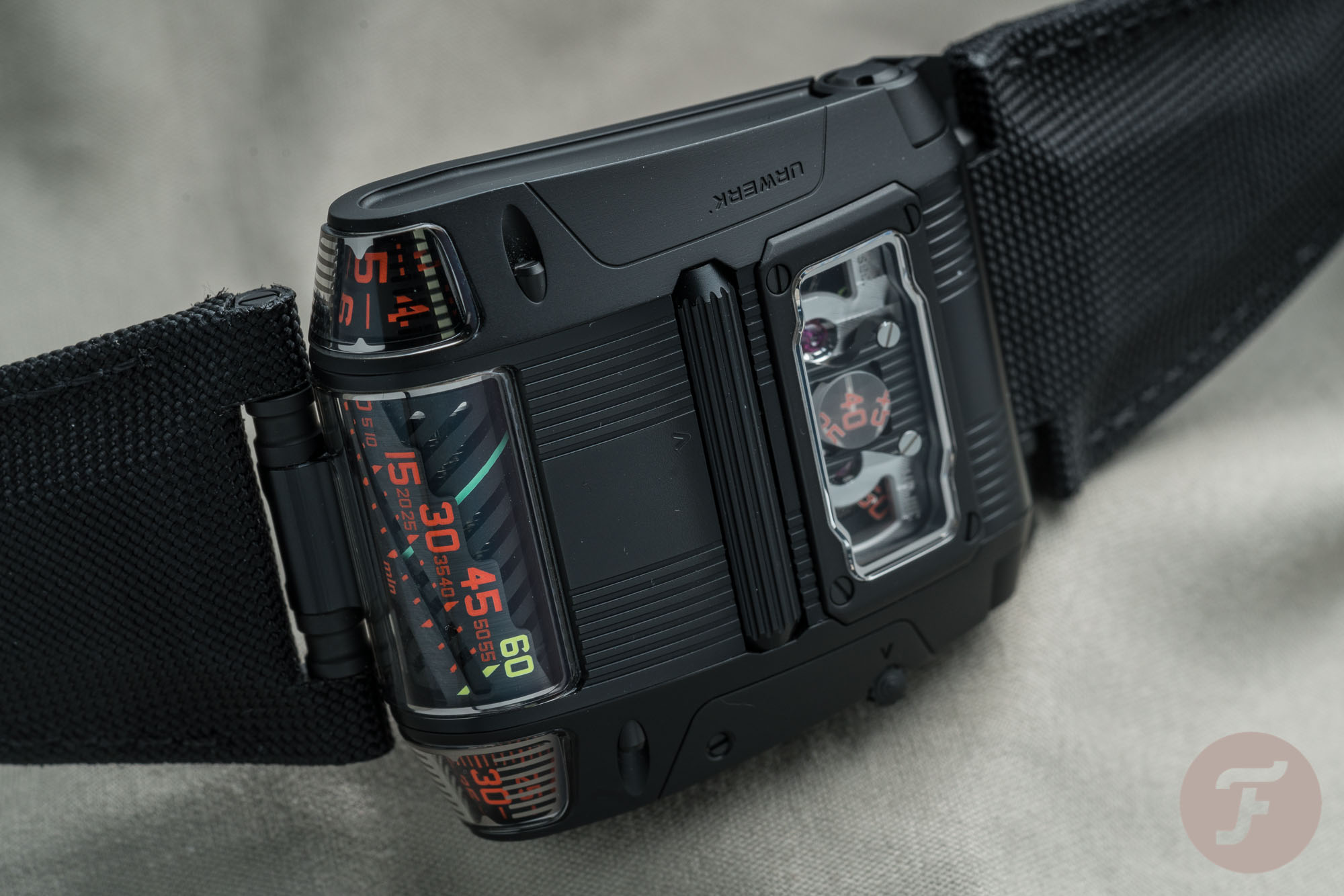 Ever since the founders Felix Baumgartner (master watchmaker) and Martin Frei (chief designer) first met back in 1995 they have made some crazy works of art. Although technically they make watches it’s a term that doesn’t do justice to their innovative designs. Hence they are always on our agenda when we visit the big events. And what better fits their all-black booth than a stealthy black UR-111C Black Cobra? 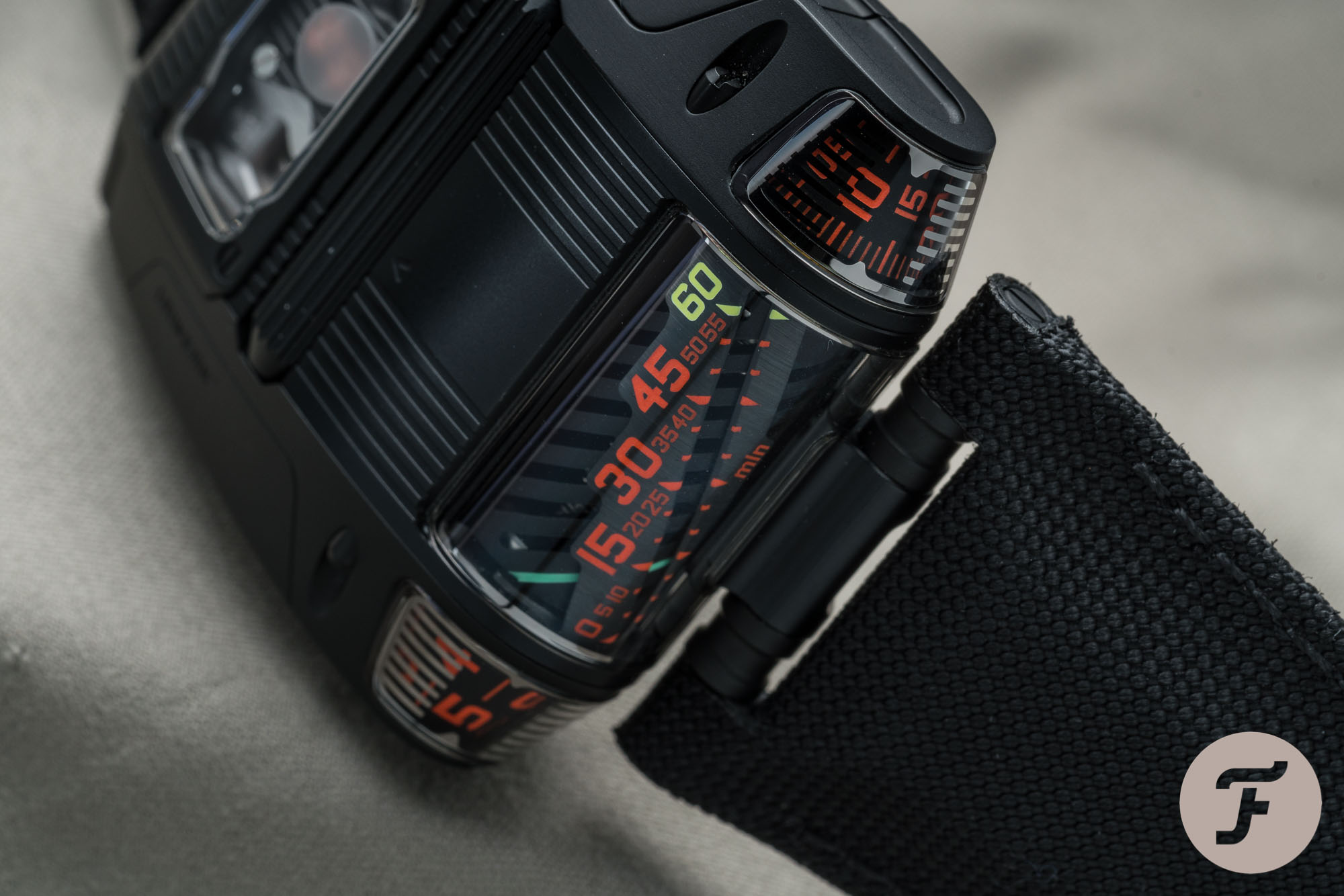 From the outside, everything is pretty much black while the bright coloured time display attracts your attention right away. With a sleek case that sits on your wrist the UR-111C wear very comfortable on the wrist. And where it looks nothing like traditional watchmaking, from the inside it’s nothing but. Yet with a not so standard way of telling you the time. Something that you get used to quickly and it’s a lot easier to read than you would expect.

With a case that lies flat on your wrist, it stays in place thanks to a wrist-hugging curve. So unlike some watches that rotate a bit, the Urwerk will stay perfectly in the right place. Due to the stealthy black case, the most important elements stand out. Behind multiple glass displays in the case, you will find several indicators. From the top of the case which normally would show the dial and hands, you have visual access to part of the finished movement. In the center, 2 open-worked wheels alternate each other displaying the running seconds. Each wheel weighs only 0.025 grams including the numerals. In the center where both wheels come together, a display accentuates the running seconds. This is made from a “dense cluster of precisely aligned optical fibers, known as an image conduit”. 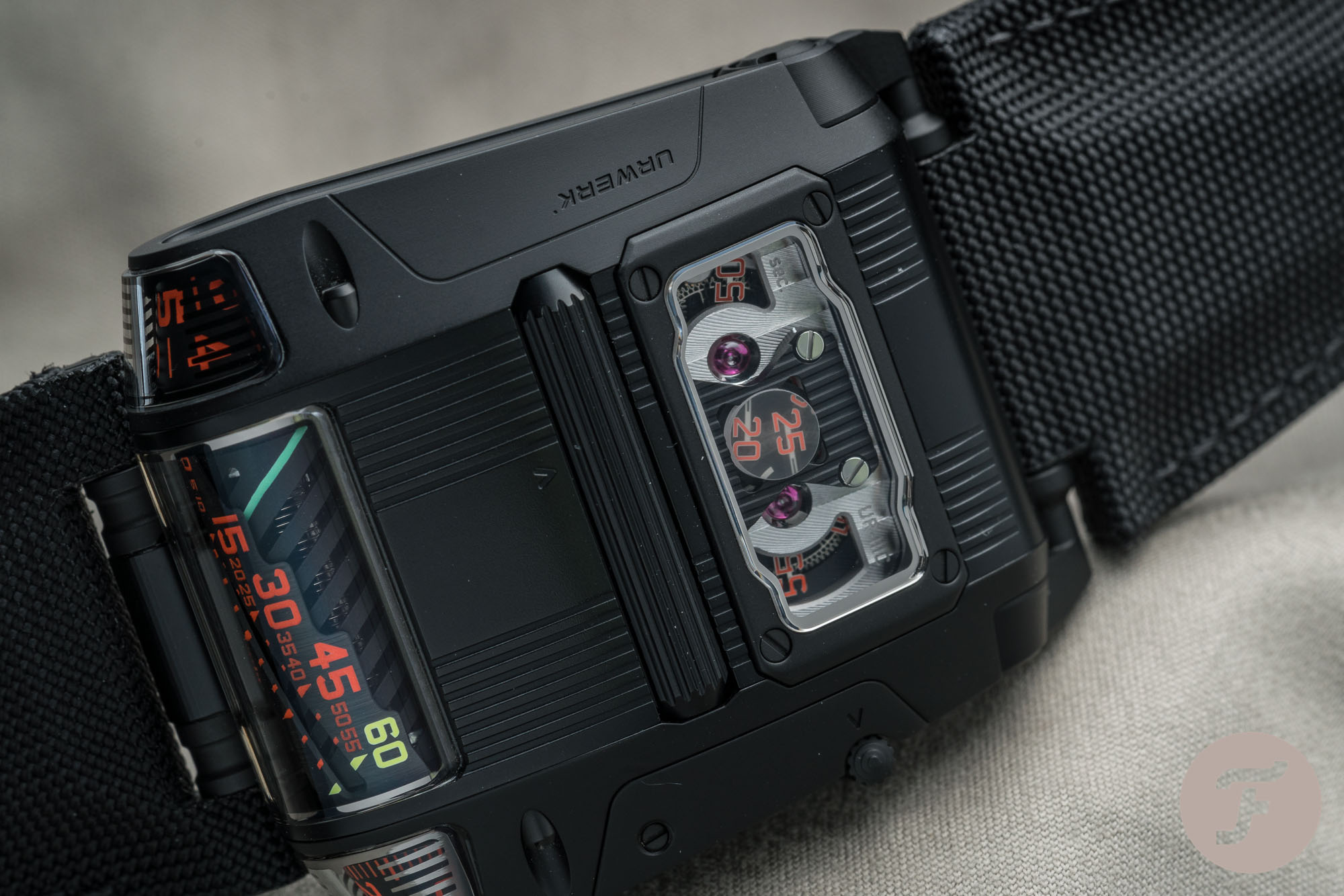 Parallel to the seconds display is the linear crown which is used for winding and setting the movement. This barrel is easy to operate and works in both directions. To use the different functions one has to operate a lever which is located on the side of the case. With the lever in the closed position, the barrel winds the movement. Should you want to change the time, all you have to do is pull the lever away from the case and turning the barrel will advance or reverse the time. If you look close you will see ‘set time’ embossed in the lever. When done you simply push the lever back into position. Simply said it’s just like an ordinary watch but executed in a completely different way and much easier to operate. 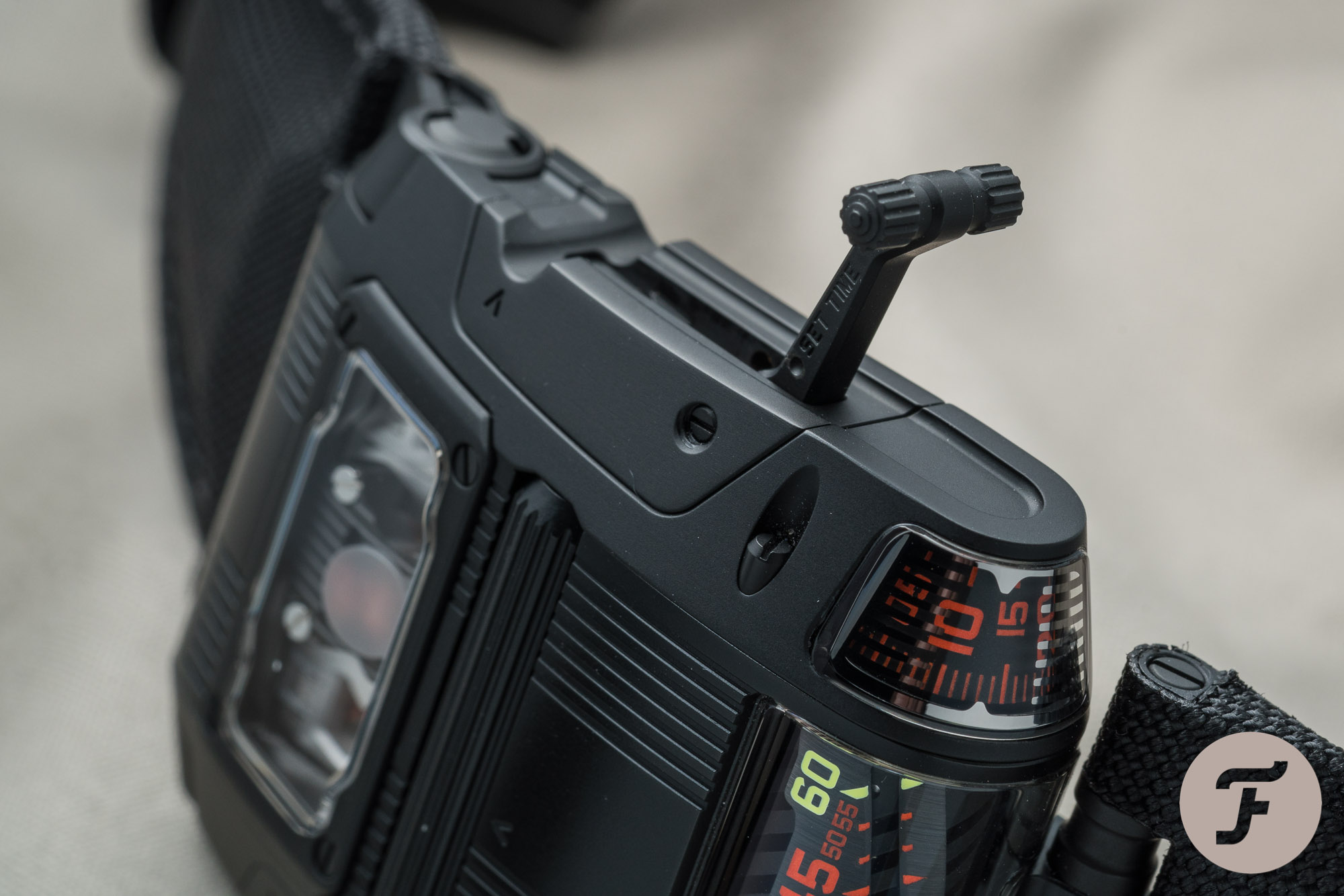 On the side of the case, you will find the main time indications which are split up between 3 different displays. And where you think that on the side of the case doesn’t make sense it actually does. While having the Urwerk Black Cobra on the wrist you notice how easy you can read the time without turning your wrist much. Just a glance at your wrist without turning it is enough. From the side, the case is designed symmetrical and has 3 zones with displays on either side and a large display in the center. 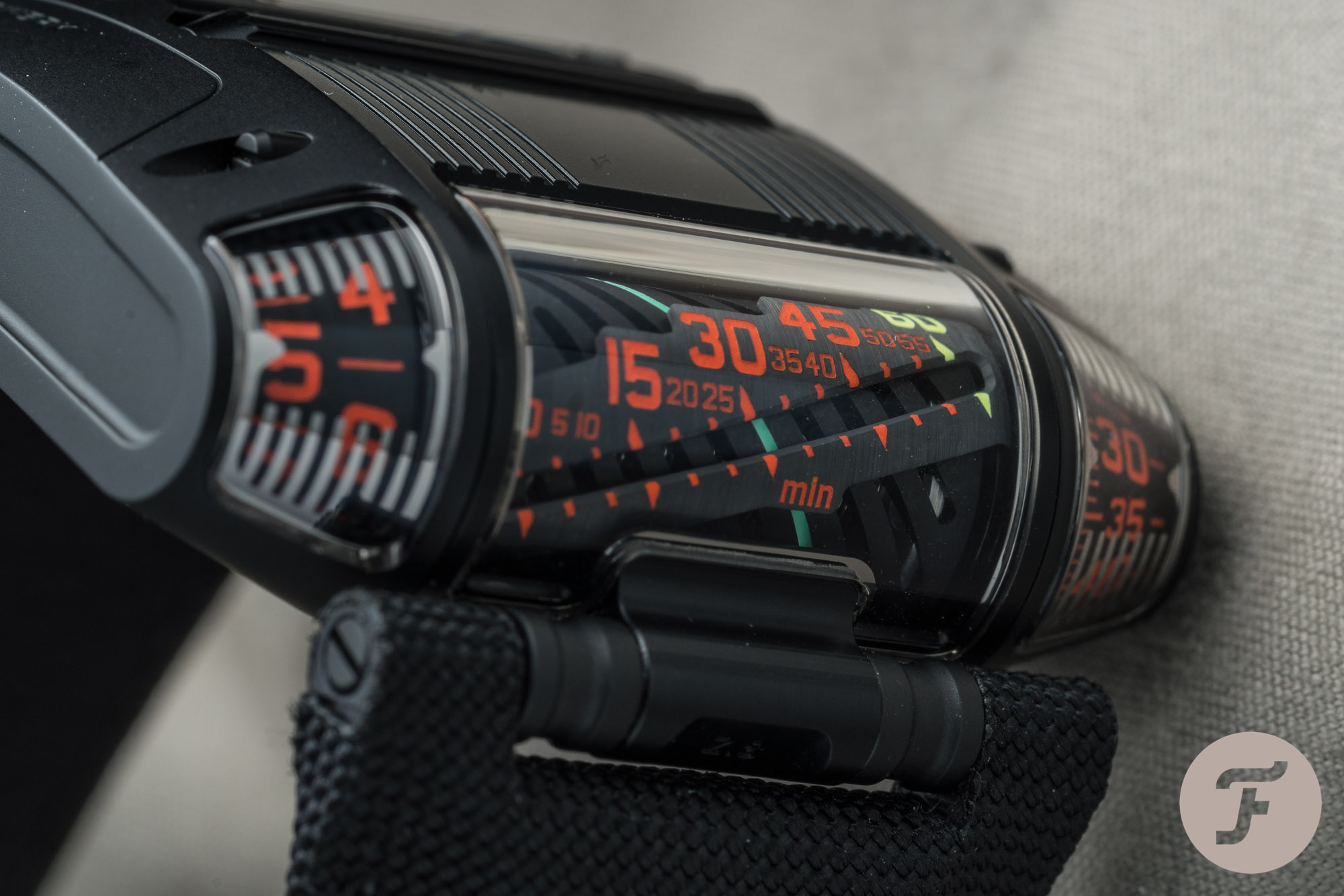 On the left side, you will find the jumping hour display and the other 2 displays show you the minutes. In the center, a wide aperture has a diagonal minute indication with a rotating barrel behind it. By rotating the line on it appears to move to the right until it starts again in the left side after 60 minutes. This gives the impression of a retrograde display. On the right side, you will find a regular minute display that revolves once every hour. This gives you a more precise reading of the minutes. So apart from the functional displays, the case is fully closed without showing you much of the movement. 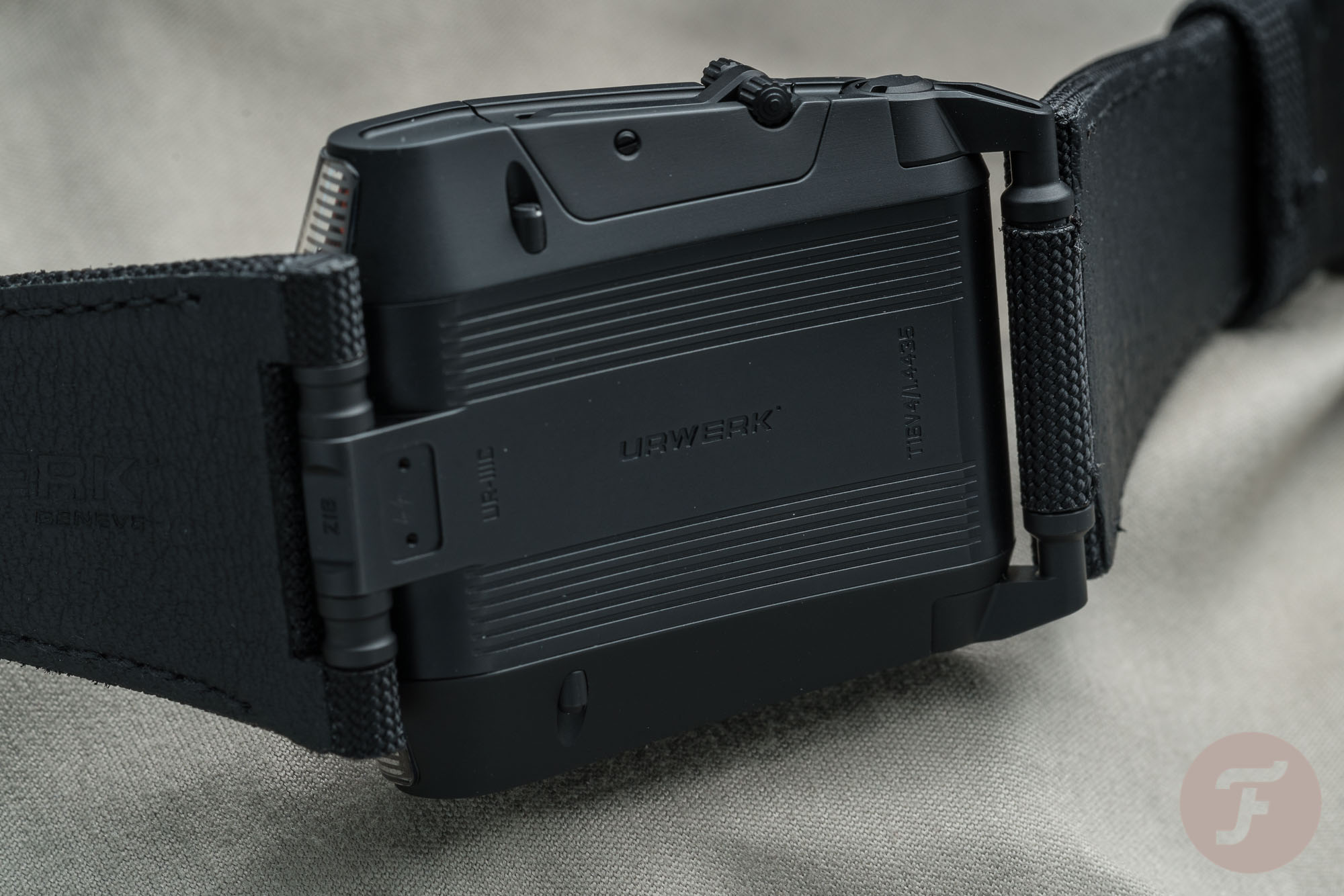 Due to the unconventional design and the lack of a case back, the movement is installed into the case from the side. The self-winding movement comes with a power reserve of 48 hours. The case itself is made from grade 5 titanium and stainless steel which are coated with black PVD. As mentioned earlier it wears very comfortably on the wrist despite its rather large dimension. The case measures 42 x 46 millimeter with a thickness of 15mm. With a water resistance of up to 30 meters, it’s not the type of watch you can wear during any activity but something tells me you wouldn’t do that anyway. 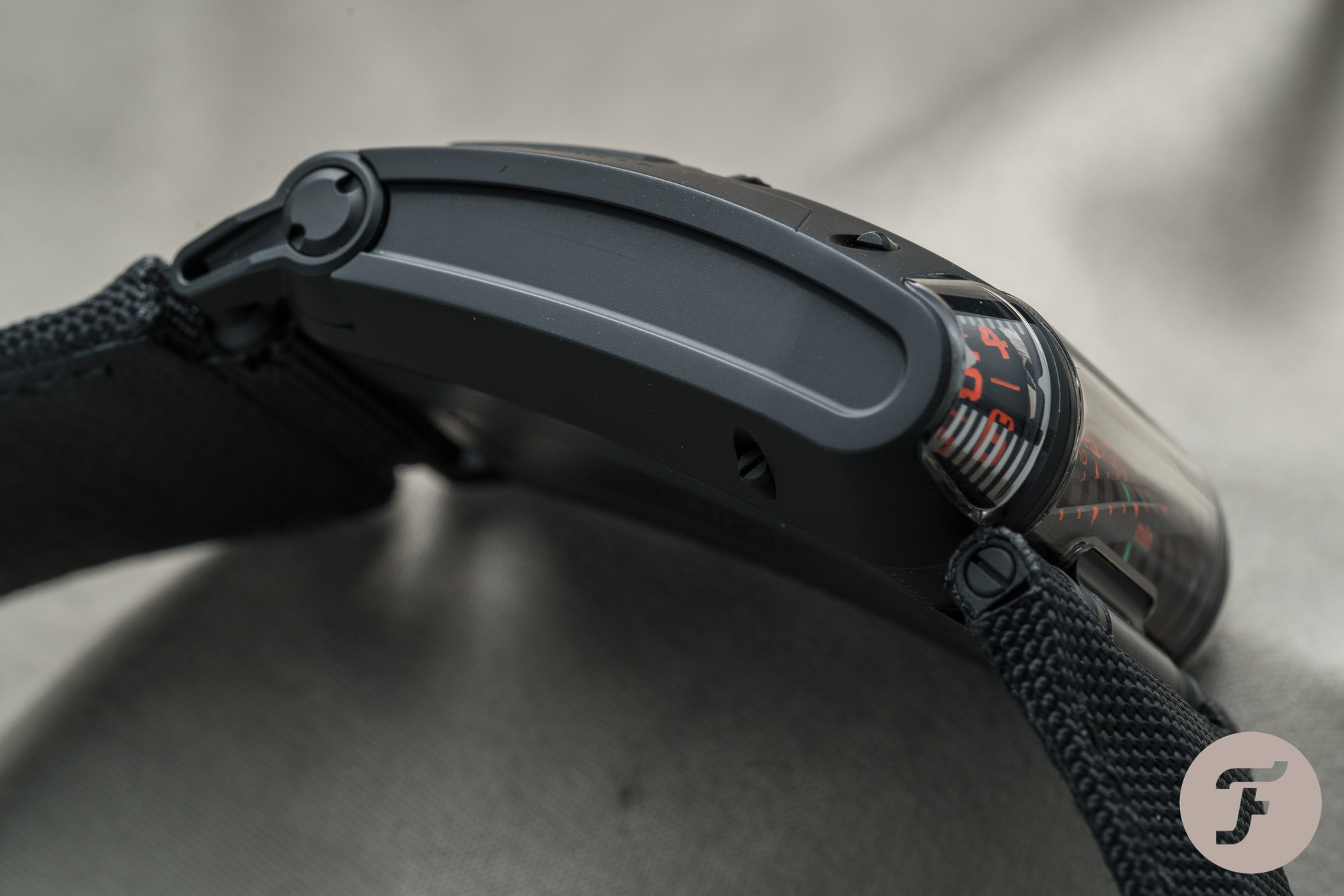 Watches like these are incredibly cool yet not in reach for many. Not only due to the hefty price tag but also because of their limited production. The Urwerk Black Cobra is strictly limited to 25 pieces at a retail price of 130.000 CHF (plus taxes). That’s nowhere close near their 2,7 mio showstopper on the other side of the booth. But whether you can afford one or not, it doesn’t really matter as there is a lot out there that most of us will never get to wear on the wrist. Which doesn’t mean you can’t enjoy their creations. Whether it’s on a fair or through a magazine like ours. It’s great to see brands creating their own interpretation time. As I always say, “when you get out of your comfort zone, that’s where the magic happens”. Something that sure goes for Urwerk and their impressive creations.

For more info make sure to visit Urwerk.com.

Hot Topics
Introducing: The New Seamaster Professional 300M 60 Years Of Bond — With A Special Animated Case Back
105 comments
Are You Still After An Omega × Swatch MoonSwatch?
85 comments
It’s Time To Invest In A Dress Watch — Our Picks From Breguet, Omega, Grand Seiko, And More
72 comments
The Rolex Waitlist Conundrum — How Much Will The Price Of Your Watch Increase While You Wait?
50 comments
The Best Omega Speedmaster Watches Of 2022
40 comments
Popular
Hands-On With The Seiko Prospex Dawn Grey Series
Robert-Jan Broer
12
Rolex Submariner Hulk versus Seiko SLA019 : Shades of Green
Michael Stockton
27
#TBT A Vintage Seiko Buyer’s Guide to Affordable Goodness
Michael Stockton
32