The Sinn U50 S Mother-of-pearl S Limited Edition surfaced in Geneva. Not in the lake, but in a basement nearby that housed the Baselworld pop-up during the Geneva Watch Days. The highlight of my late afternoon visit to the basement was seeing and holding the black diver’s watch with a shimmering light blue mother-of-pearl dial.

It all started with a stiff in the Baselworld basement bar. It was an Old Fashioned, if you must know, and it landed on an empty stomach. After going to watch fairs for quite some years, I still can’t seem to manage to eat on time, but anyway… With an ever-so-slight but pleasant buzz, my eyes fell on the Sinn U50 S Mother-of-pearl S Limited Edition in the brand’s miniature booth. The odd combination of black hardened steel and hypnotizing MOP struck me. Was it the alcohol talking? To find out, I asked Sinn to send the special U50 S to the office, where I would be able to look at the watch 100% sober. 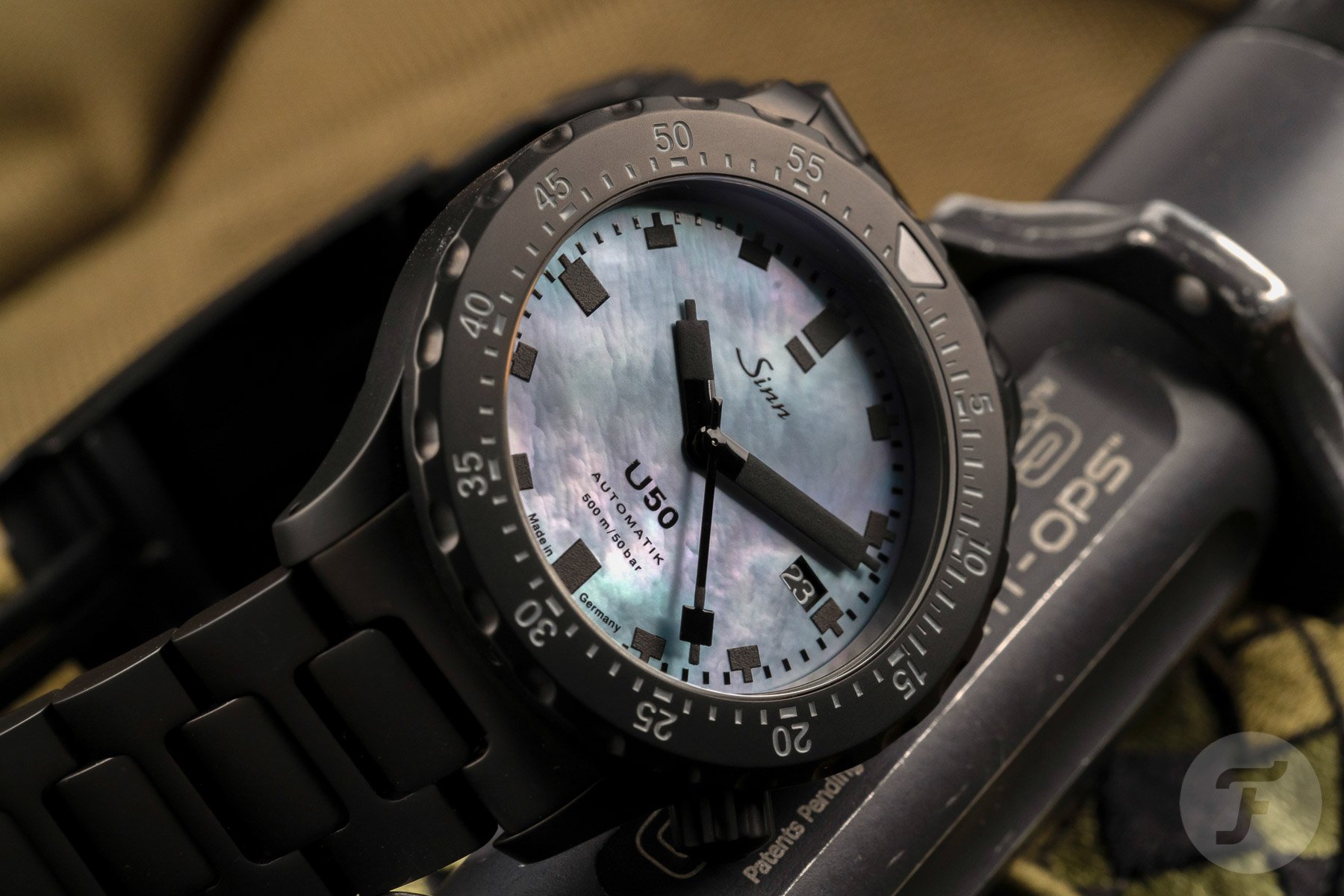 I won’t go over all the specs of the Sinn U50 S Mother-of-pearl S Limited Edition. Ignacio already did that quite extensively right after Sinn’s appearance at the Baselworld pop-up. Please find his impression here. I will just quickly sum up some of the features if that’s okay. The Sinn U50 S Mother-of-pearl S Limited Edition is a 500-meter water-resistant diver’s watch that measures a moderate 41 × 11.5mm. The case is made from extremely tough German submarine steel with a black TEGIMENT coating. More tool watch features include the tough, double AR-coated sapphire crystal and the low pressure-resistant case. 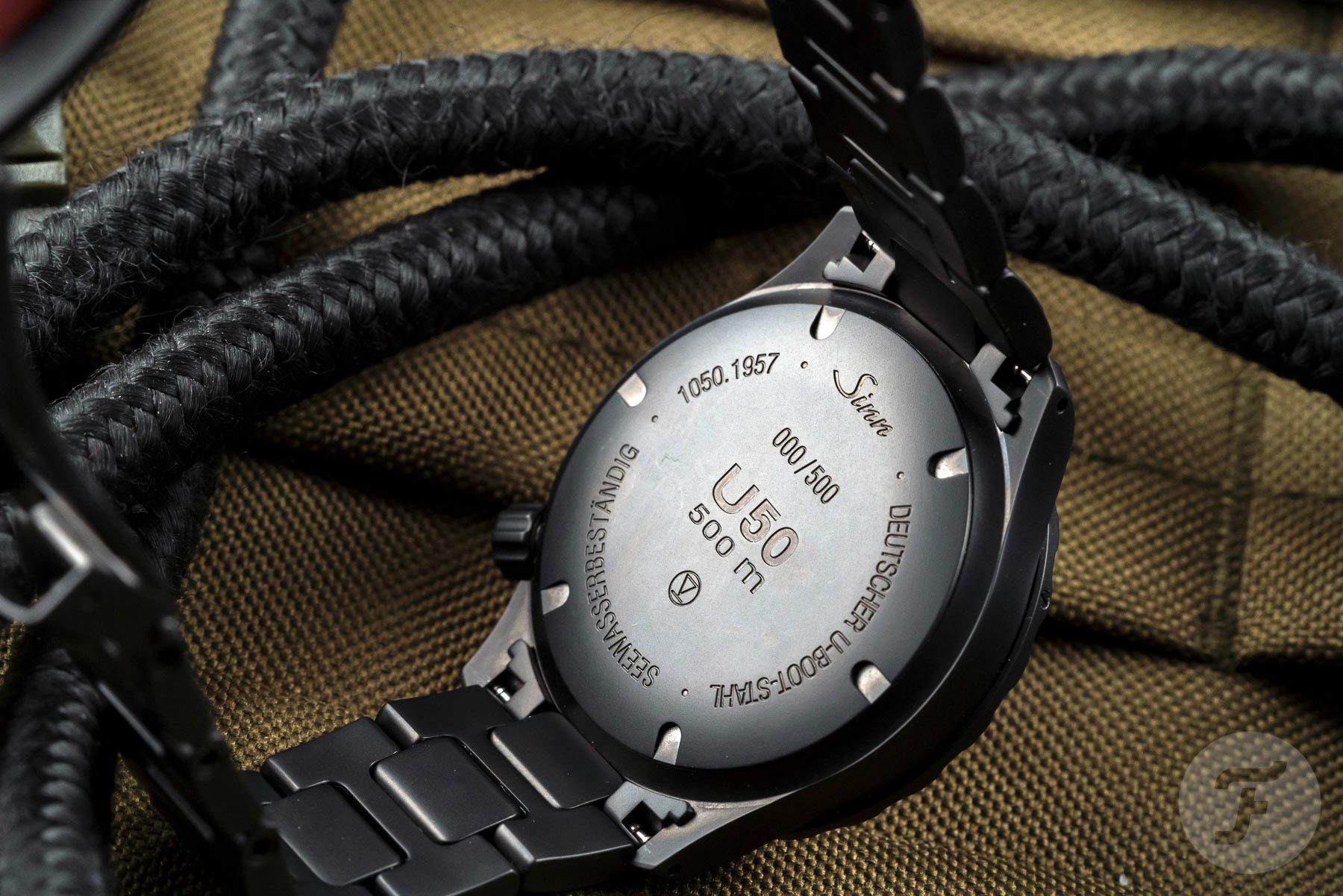 A functional, yet unusual Sinn

Just to cover the basics of the Sinn U50 S Mother-of-pearl S Limited Edition, the movement inside is the self-winding caliber Sellita SW300-1. It’s a 4Hz movement that features 25 jewels, a hacking function, and a 42-hour power reserve.

… on with the more alluring aspects of this most peculiar and unusual Sinn.

The movement is also anti-magnetic and can withstand magnetic fields of 4800 A/m. But enough functional talk, and on with the more alluring aspects of this most peculiar and unusual Sinn.

The Sinn U50 S Mother-of-pearl S Limited Edition is not a watch you buy because of its specs. This is a love-at-first-sight watch. I’m not saying the impressive features and functions don’t matter. They sure do, and they add gravitas and credibility to the watch. But instant infatuation is all about looks. If something looks mind-bendingly good and later turns out to be interesting as well, that’s a double bonus. But it all starts with a first glance. 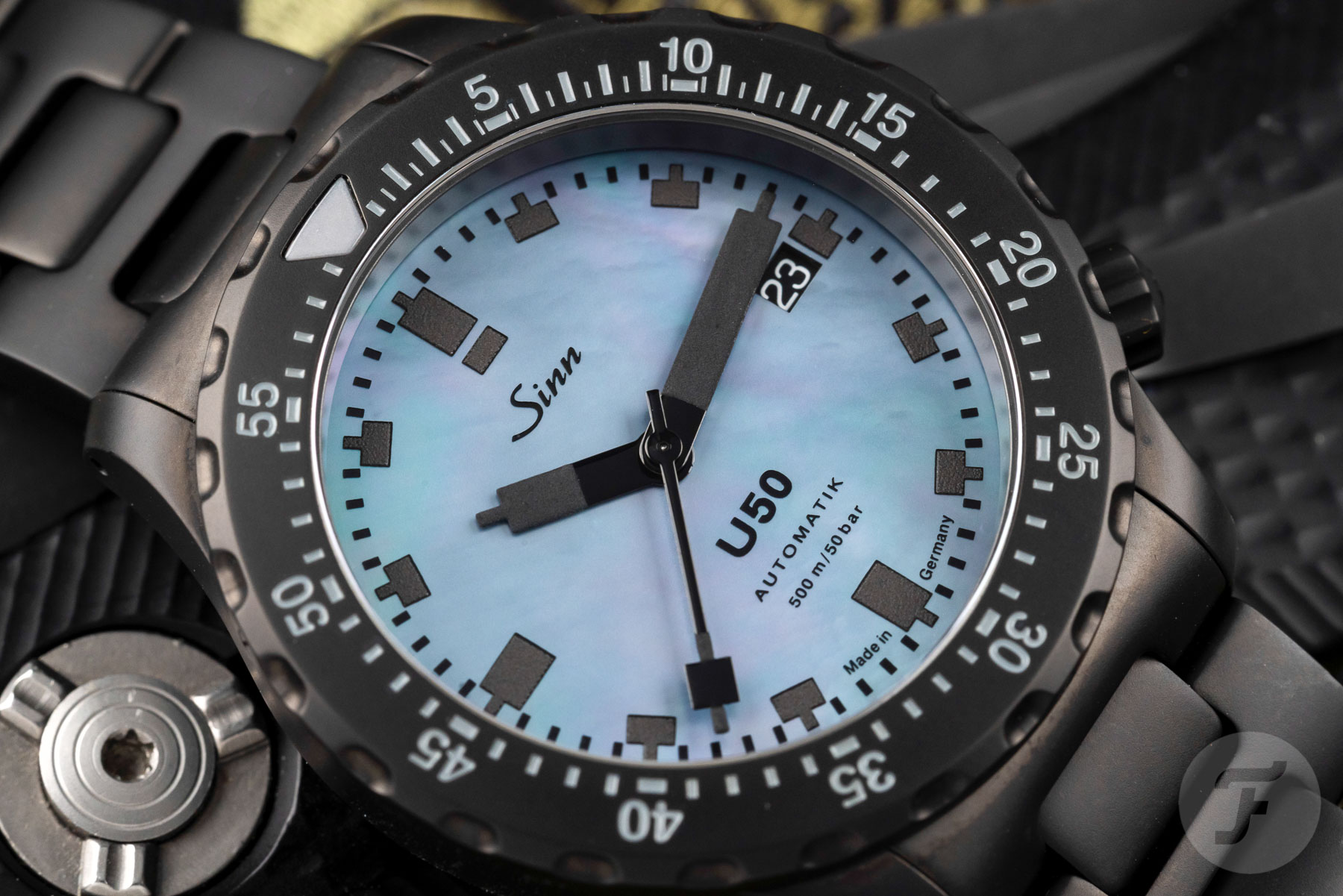 I immediately noticed the U50 S Mother-of-pearl S Limited Edition amongst its fellow Sinns in the showcase. And of course, I eagerly asked if I could hold it and try it, since that’s how watch journalists roll — especially after a drink. The contrast between black steel and light blue MOP is stark, to say the least. There’s a hint of a bluish-gray on the dial markings, but everything except the dial is fully blacked out. And in this all-black surrounding, the softly shimmering pearlescent spectacle with flashes of pink and purple is the star of the show — pop-up Baselworld 2021 in Geneva, that is. 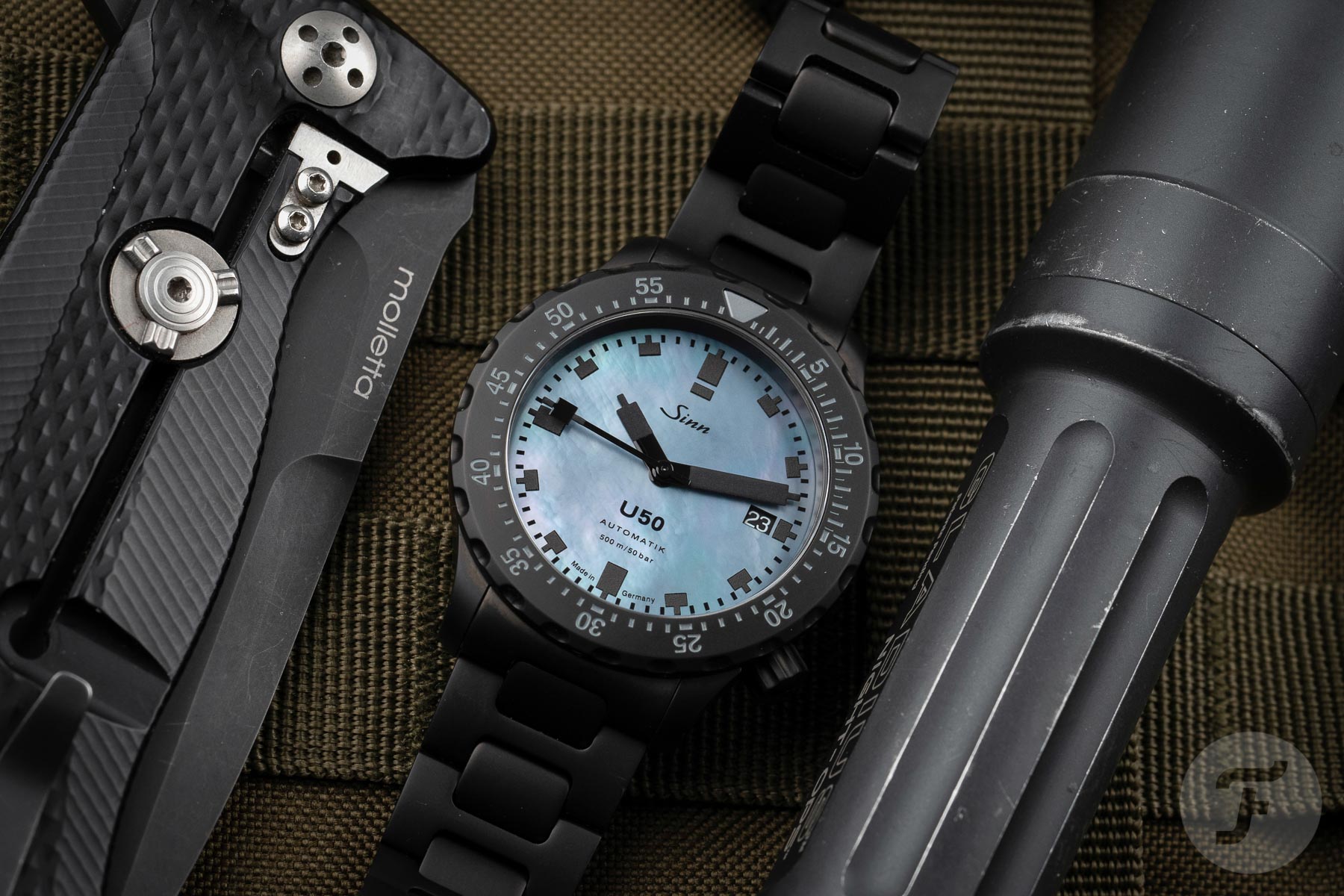 A touch of joy

Luckily, the Old Fashioned didn’t cloud my judgment when I said I really wanted to get up close and personal with the Sinn U50 S Mother-of-pearl S Limited Edition. Because once number 0 of 500 arrived at HQ, I felt the same pleasant tingling sensation once more.

… this watch is like a diver in full gear, wearing colorful swimming trunks over his black diving suit.

A touch of joy, experimentation, and color can transform an essential tool watch into a fun watch, and this Sinn U50 is a perfect case in point. And the great thing is, this watch is like a diver in full gear, wearing colorful swimming trunks over his black diving suit. No sacrifice is made on the functional side; there’s just a bit of added fun to brighten up the day. 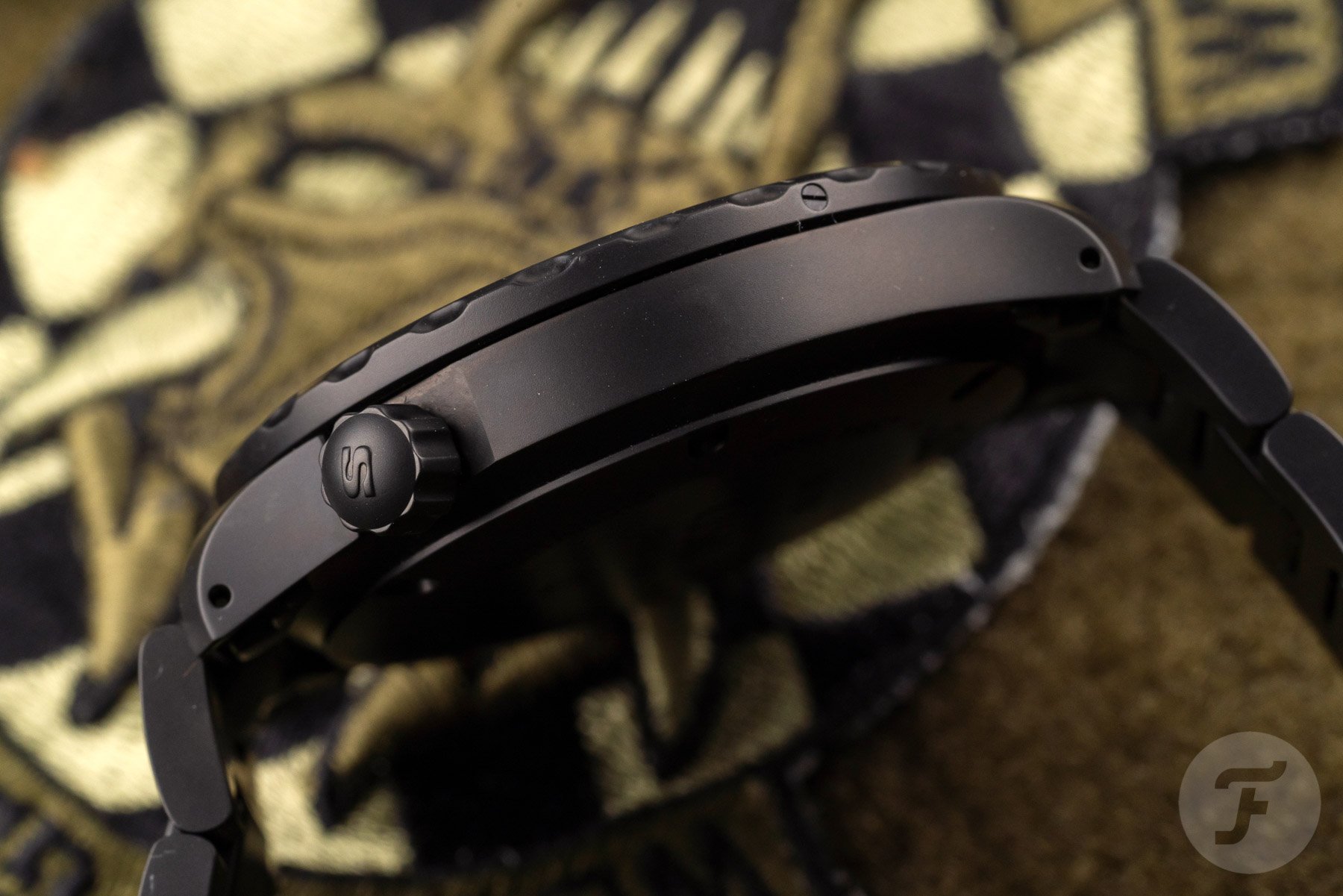 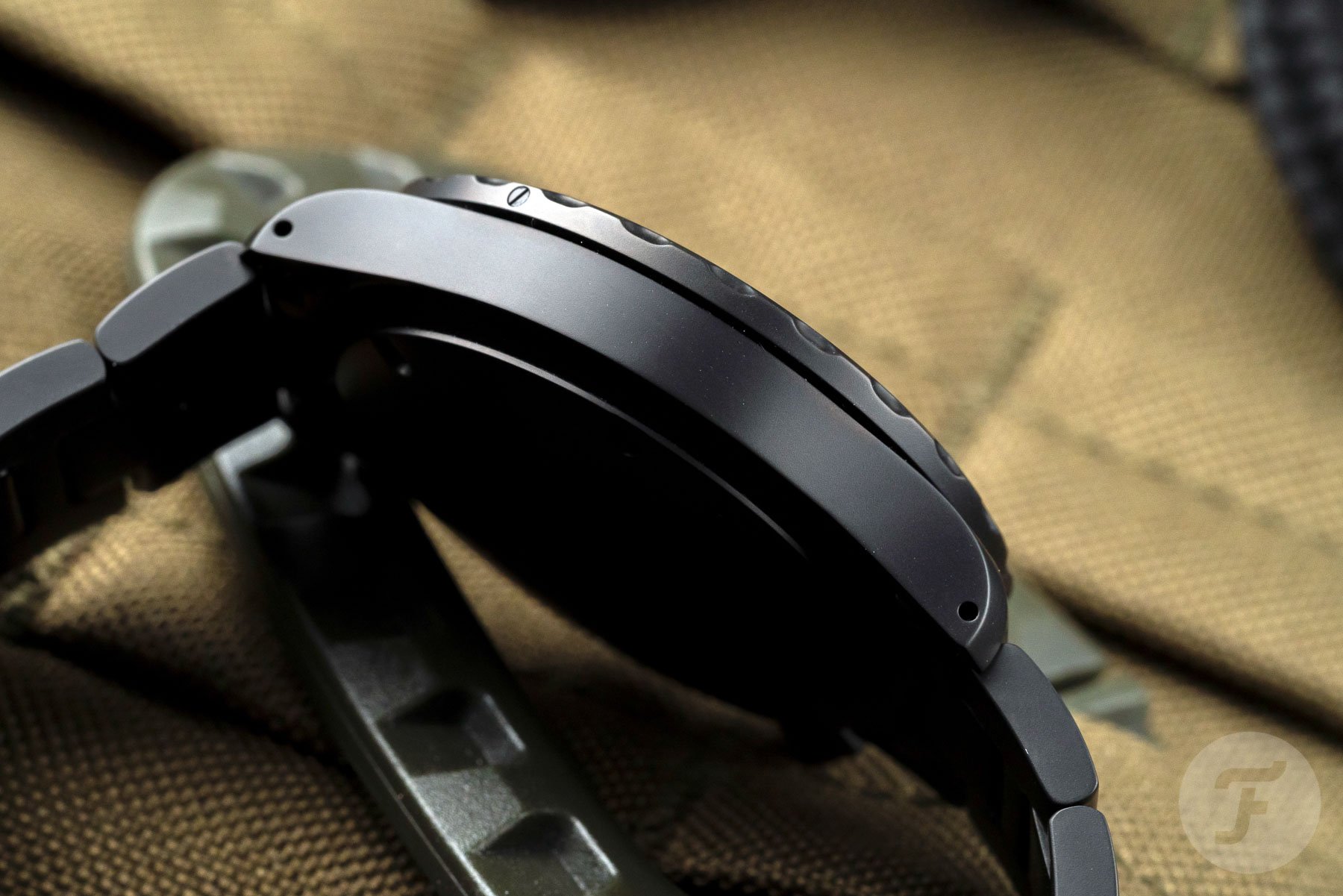 And that’s just what the U50 S Mother-of-pearl S Limited Edition does: it brightens up your day and your mood. There are no sacrifices in legibility either, because the signature Sinn diver hands, with their glossy black finish, feature the same matte black lume that you’ll find on the hour markers. The black date window at 3 o’clock is also a nice touch. When Sinn from Frankfurt am Main does fun, they do it as gründlich as they build tool watches. 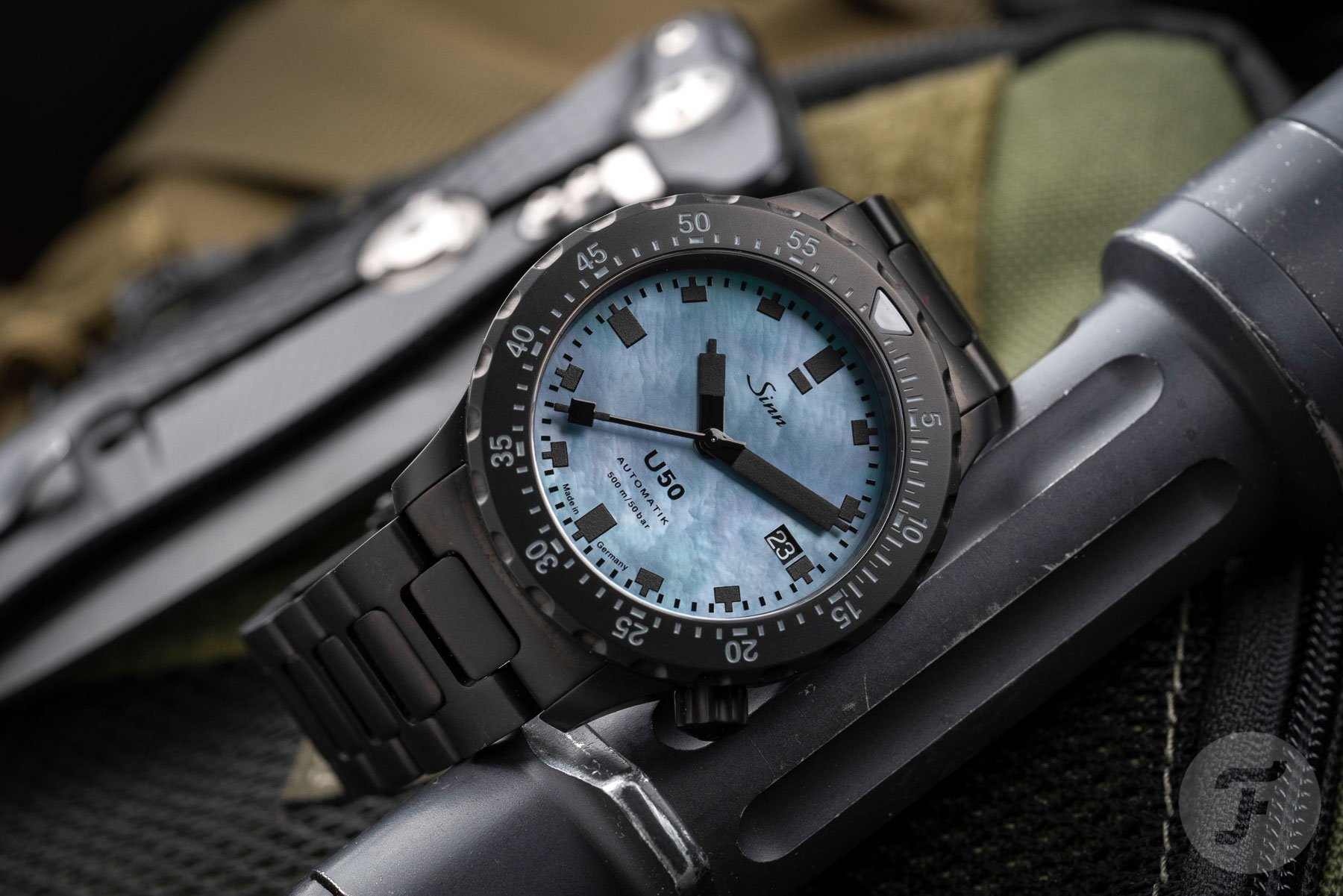 If you find yourself under the spell of this dive watch with a twist, it’s important to know that there were just 500 pieces made. Prices range from €2,450 for the U50 S Mother-of-pearl S Limited Edition on a leather strap to €2,840 on the matching matte black steel bracelet you see in the pics. 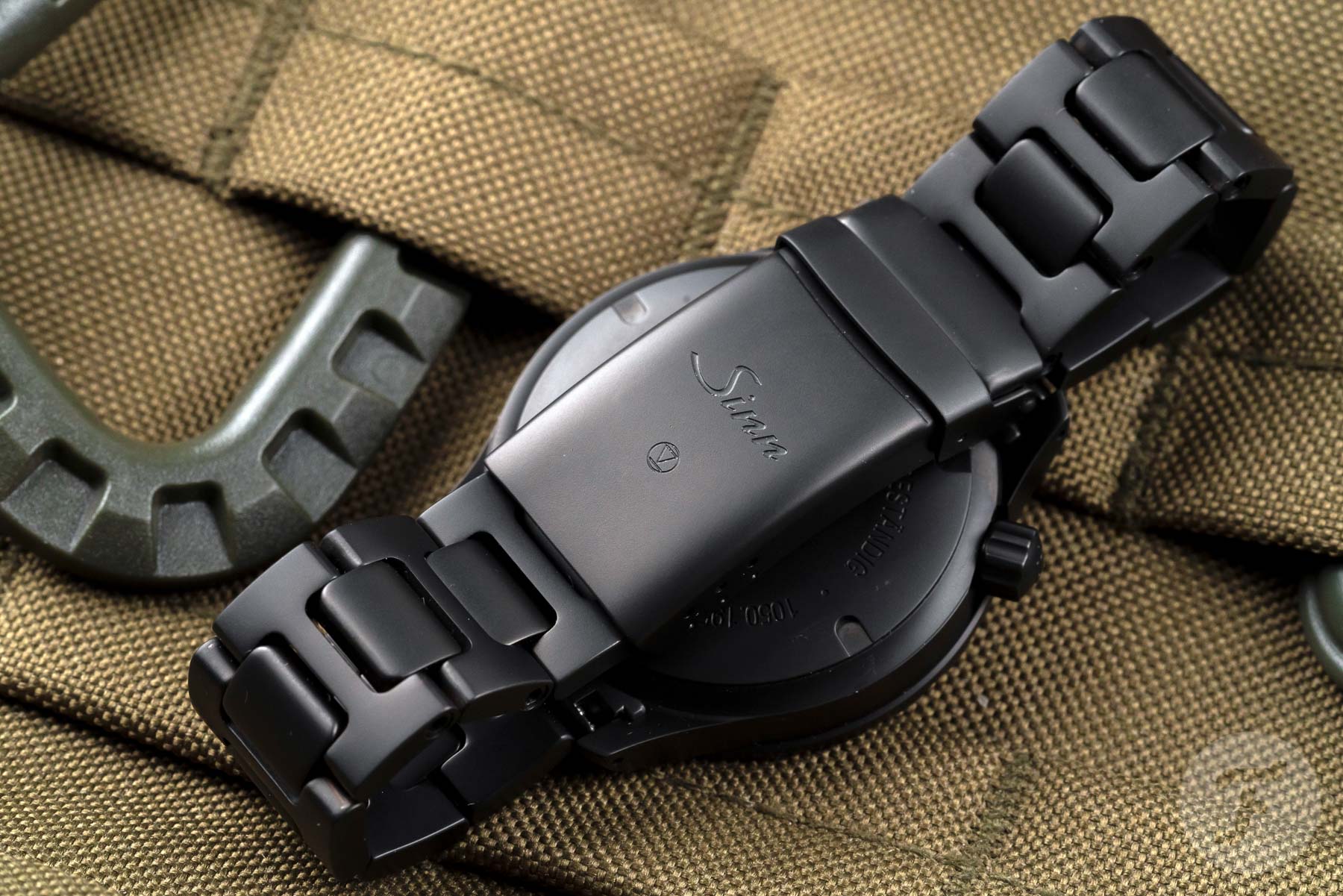 My personal favorite is the €2,750 version with a black rubber strap, though. The sturdy leather strap doesn’t really match the character of the tropical dial — my thoughts wander off to the islands of the Pacific, where palms sway slowly in the breeze — and the same goes for the metal bracelet. It’s just a bit too industrial for me. The rubber strap, on the other hand, is perfect. It’s soft on the skin, wears comfortably both in and out of the water, and that same water also won’t damage the strap. That’s a pretty perfect picture. 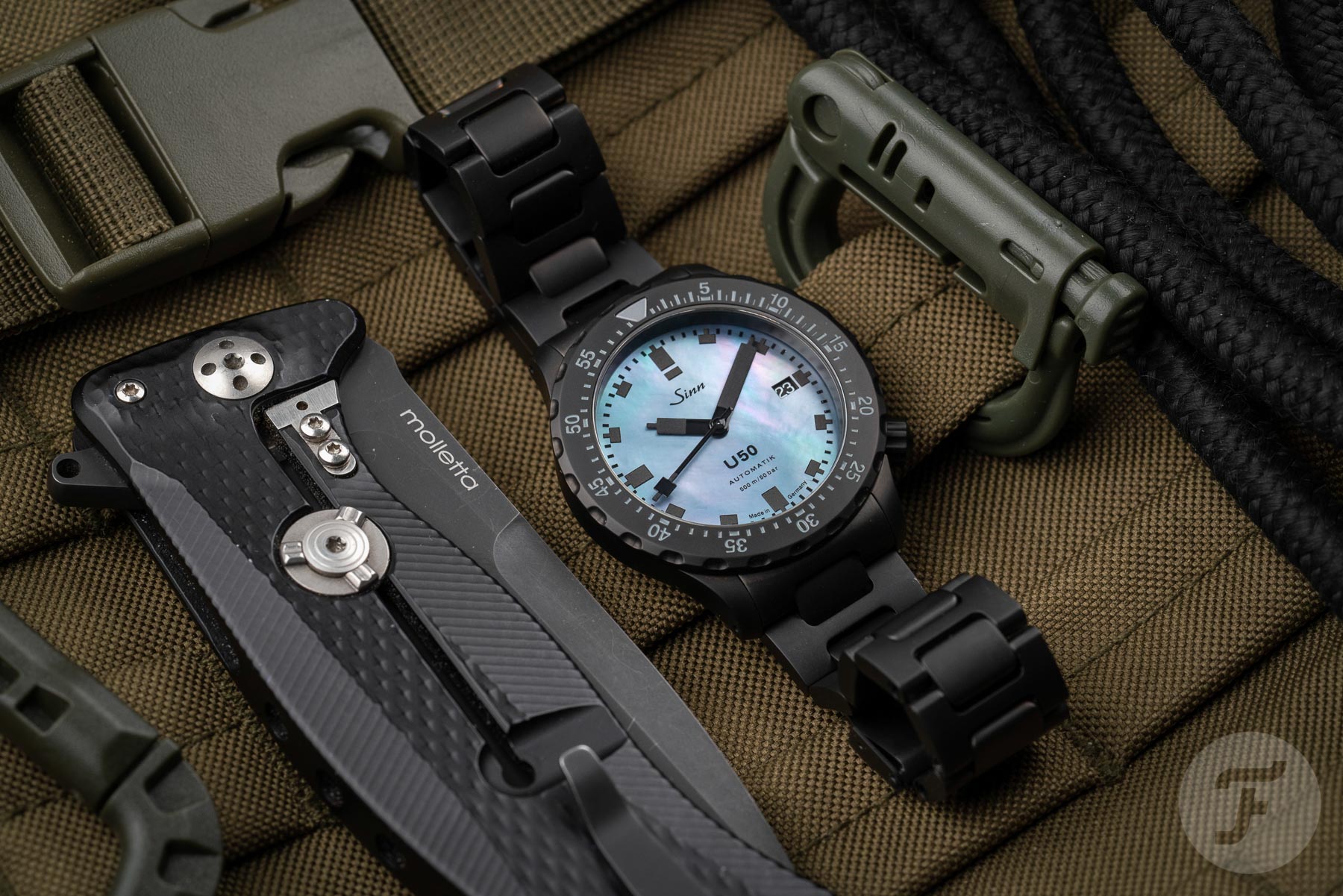