The Monaco Dark Lord returns in its fully square form, and the Leoncino Tiki and the Seventies Chronograph Panorama Date round things off
Lex Stolk
comments 3
Share

Back in 1986, Huey Lewis already knew that it’s hip to be square. I know, I know, Huey wasn’t singing about the shape of your watch. But still, him mentioning that he’s working out almost every day and watching what he’s eating does make sense in a column called Coffee Corner Watch Talk. And that’s because too many cups of coffee per day isn’t good for your health. Moving around the office is, though, and so is drinking plenty of water. So, don’t go for an office walkabout only to pick up a fresh, hot coffee. Instead, make a pit stop at the water cooler too. Oh dear, I sound like my mom now. Anyway, let’s stick to square or squarish watches from TAG Heuer, Magrette, and Glashütte Original. And maybe a little peek at the definitely-not-round Minase Horizon 2.0 while we’re at it…

Did you watch yesterday’s Monaco Grand Prix? Just ahead of this classic race on the Formula 1 calendar, TAG Heuer announced a reinterpretation of a famously sinister version of the square Monaco, the Dark Lord. The €7,750 special edition celebrates not only references motor-racing history and the legendary Monaco Grand Prix, but also the 1970s Heuer Monaco Dark Lord Ref. 740303N — a watch that proves the fact that it’s hip to be square. 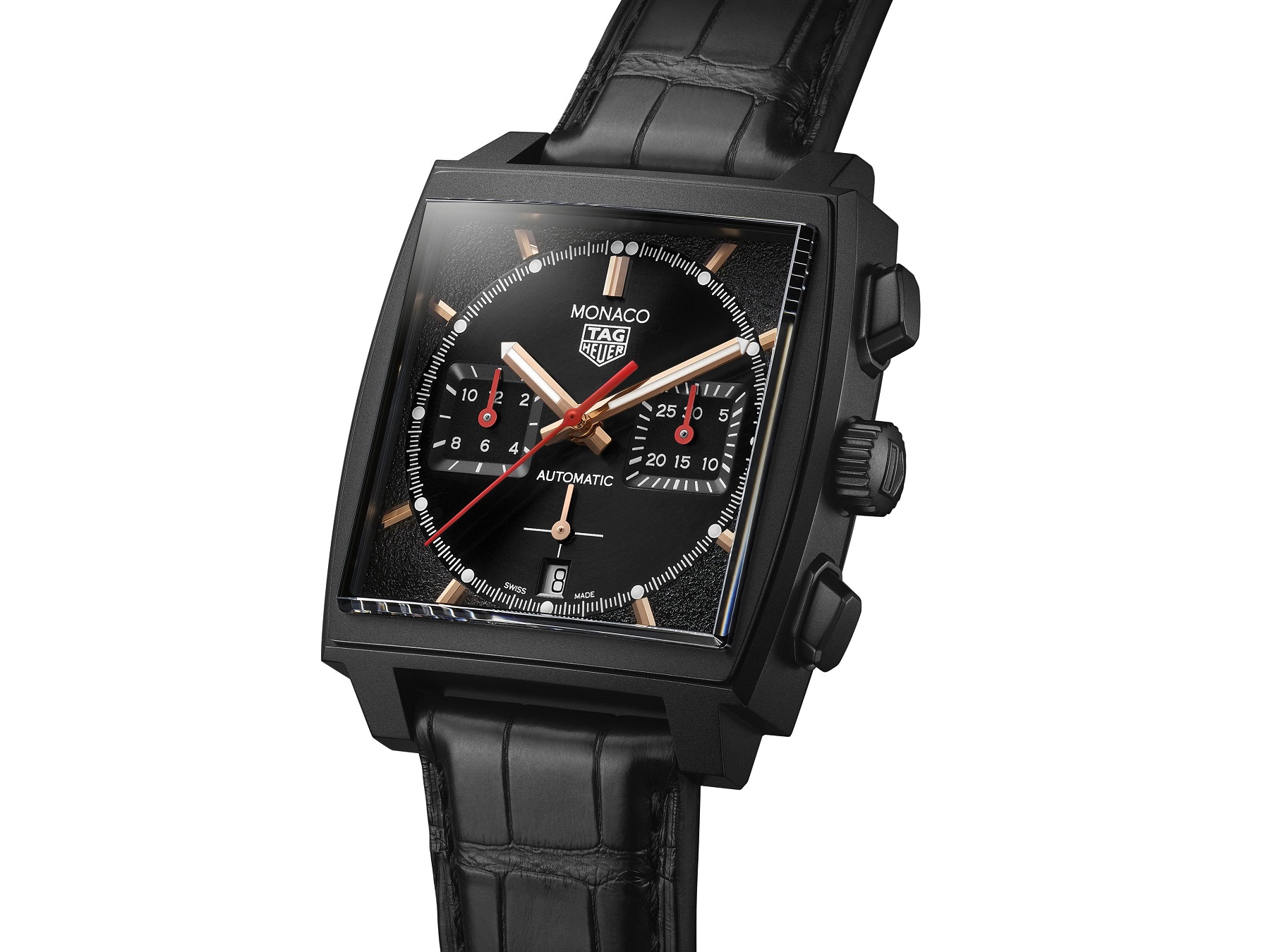 It’s hip to be square with TAG Heuer, but that wasn’t always the case

When the big, bold, and (most importantly) square Heuer Monaco debuted, not a lot of people liked it. The lack of interest in the Monaco, however, gave Heuer license to experiment. So in 1974, the brand put a few steel square cases through a newly developed blackening treatment. Heuer also decided to put different movements in its darkest creation thus far. Since the brand still had a few unused Valjoux 7740 movements lying around, those were put inside the PVD case instead of the Calibre 11. Not only does the 7740 run at a faster frequency but it also has a very different architecture than the Calibre 11, as the latter movement has its winding crown on the left. It is still unknown how many PVD Monaco chronographs with a crown on the right were made, but Jack Heuer thinks it’s between 100 and 200 examples.

The new Monaco Dark Lord is dressed in Grade 2 titanium

The original black Monaco got the nickname “Dark Lord” for obvious reasons. And it fits. When you paint the square case black, something very characteristic, charismatic, and even sinister is the result. The new Monaco gets a Grade 2 titanium case that is coated in diamond-like carbon (DLC). The hands and indexes show a warm gold color, and the outside of the dial has a grainy, asphalt-like texture. You will read more about this very interesting and good-looking watch later this week, so stay tuned.

You can find more info on the official TAG Heuer website. 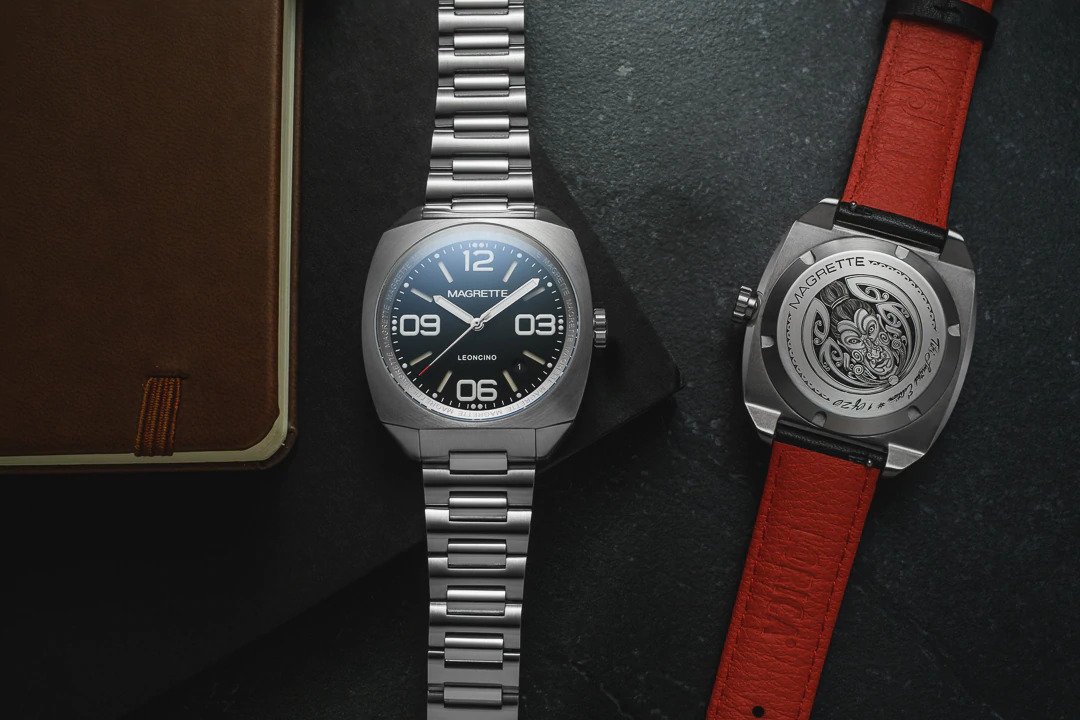 Did you know that Tāne, Lord of the forest and birds, created Tiki, the first man, out of his own blood and clay? Since I know way too little about New Zealand and Māori mythology, I didn’t. Anyway, according to New Zealand-based watch company Magrette, Tiki was lonely and wanted company. And that’s why one day, while he was wandering through the forest, he was elated to see his own reflection in a pool of water. Tiki was so happy because he thought he had found a companion and dove into the water. But when he did, the rippled surface of the water shattered the reflection. Tiki became bitterly disappointed, so he filled the pool with earth from the forest floor. After his labor, he fell asleep, only to awake and discover that the pool had given birth to a woman named Marikoriko, who became his wife. 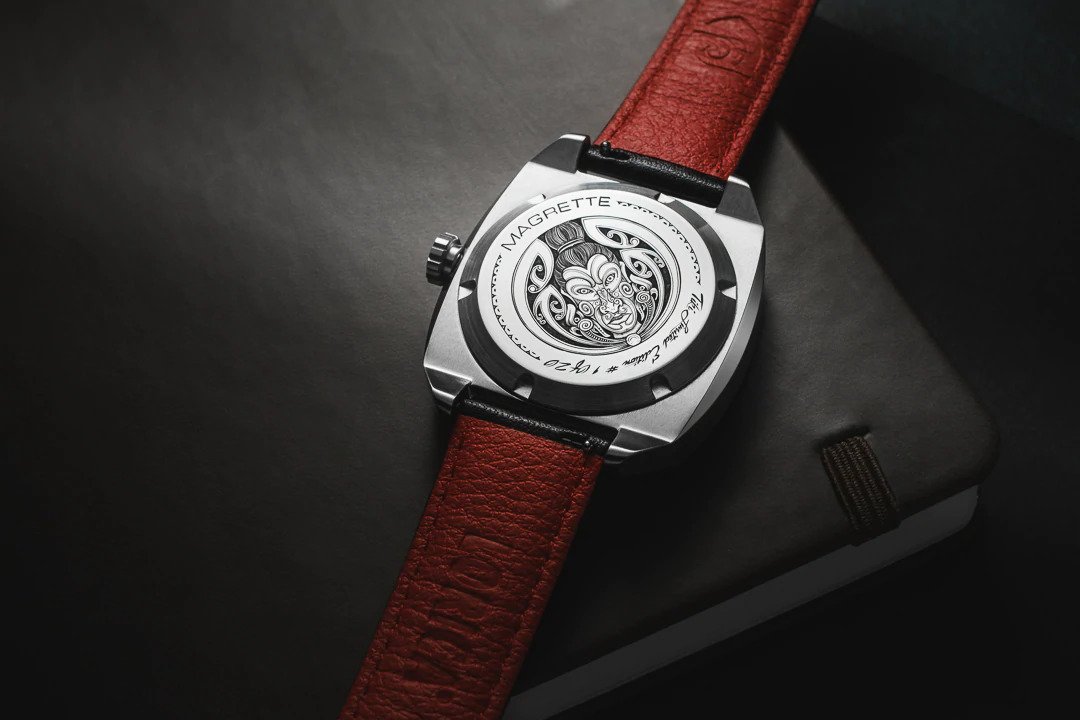 Making whoopee results in a watch

Curious what the watch has to do with Tiki? Have a sip of coffee and bear with me. So, Tiki and Marikoriko from the pool were living happily together. One day, Marikoriko saw an eel, snatched it up, and became excited. And her excitement got Tiki in a certain mood, and guess what happened then… That’s right — the couple made the first whoopee in history. And now we have the squarish Magrette Leoncino Tiki, a watch with a case back that shows Tiki flanked by two Manaia (guardian angels) and a lot of eels. The steel case is 40mm wide and water-resistant to 200 meters, and the Swiss-made Sellita SW200-1 automatic movement beats away inside. 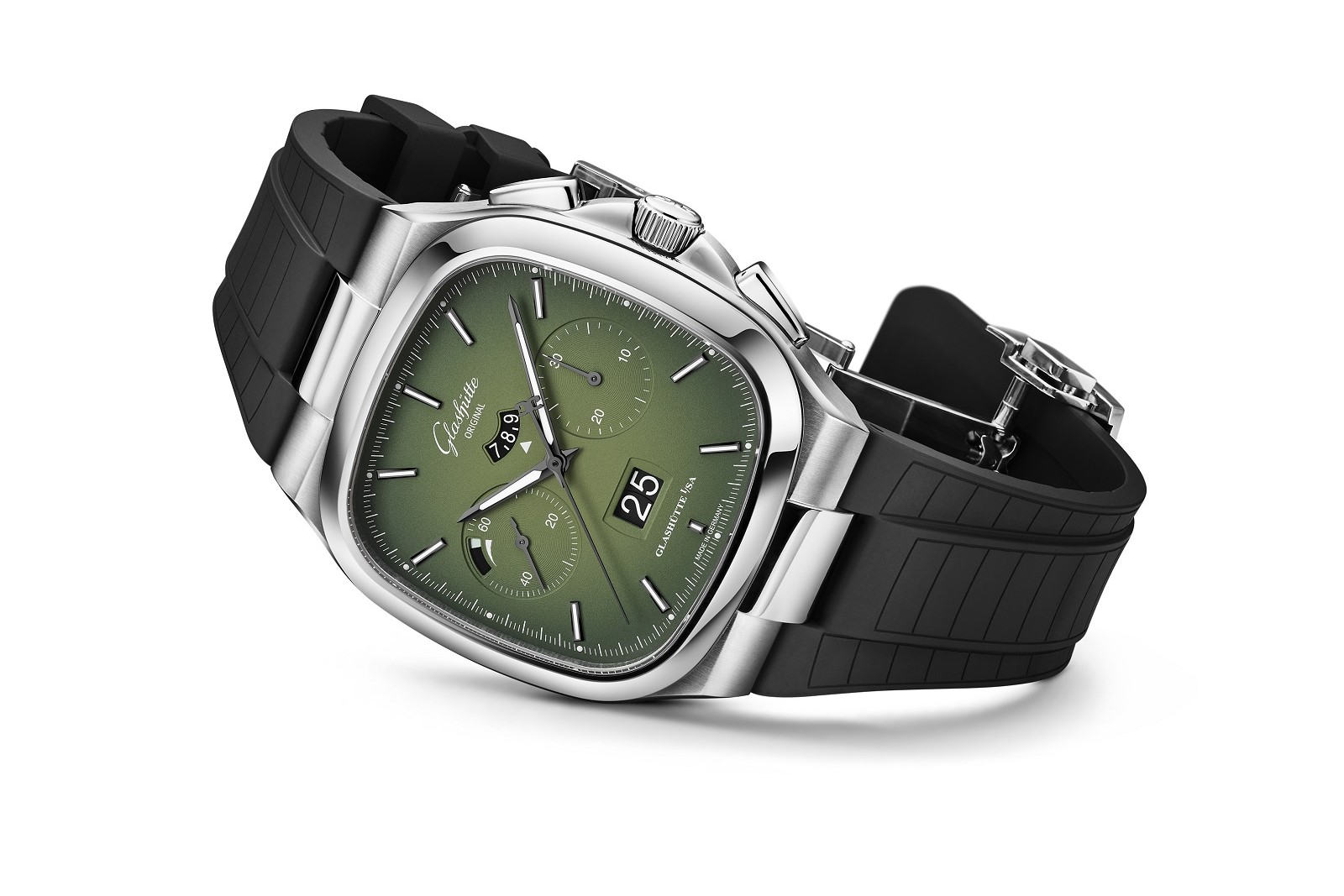 It has always been hip to be square in Glashütte

Glashütte will never, ever be the capital of fashion. The little watchmaking town in the Saxonian hills is not inhabited by the most flamboyant and exuberant crowd. It’s a town where watchmakers rule the roost. And — I really don’t want to offend anyone here — watchmakers don’t mind being square. You need a regular rhythm in life to keep your head clear and your hands steady. But the Glashütte Original Seventies Chronograph Panorama Date in Fab Green is both square and kind of hip. And it’s also quite a complicated watch. Inside the 40 × 40mm rounded-square steel case beats the manufacture column-wheel caliber 37-02. It boasts a 70-hour power reserve, and you can see the exquisitely finishing through the sapphire crystal case back.

It’s the combination of a non-generic square case, a deep green lacquer dial with dégradé effect, black indices and hands, and the brand’s signature Panorama Date that makes this flyback chronograph stand out. There’s quite a bit of 1970s flavor that follows the ongoing retro trend, but the choice of straps and bracelets is nicely contemporary. You get the choice of a brown-gray calfskin nubuck leather strap or a black rubber strap with a fold-over clasp (both €14,200). And if a strap isn’t your thing, the watch also comes on a stainless steel bracelet with a fine-adjustment mechanism for €15,400.

By the way, last year, Rob wrote about the turquoise version of the hip-to-be-square Seventies Chronograph Panorama Date. If you want to know more about the Fab Green version, please visit the official Glashütte Original website.

The last square watch I have to mention is the Minase Horizon 2.0 on my wrist. It’s obviously in the office, and Sky wrote up an article on it, so I’d suggest all fans of distinct Japanese watchmaking check that one out. Have a great watch week, and if you don’t mind, tell us your favorite square watch in the comments below.