With Time to Move complete, we’re now free to shed details on all the new releases such as the new Omega Seamaster 300M Sedna Gold.

Since the release of the new 42mm Seamaster 300M at Baselworld 2018, we’ve been smitten by this diver.  With its reintroduction of the wave dial made popular by Pierce Brosnan as “007”, but with far higher quality looks, what’s not to like?  Whether in full stainless, bi-color (probably the watch we love most), 44mm titanium, or the limited edition tantalum titanium, it’s a real looker.  And with a Co-Axial Master Chronometer inside and a starting price of only 4,500 Euros for steel on rubber, it’s a seriously competitive watch.  Today, though, the ante has been upped as we’ve now laid our eyes upon the new Omega Seamaster 300M Sedna Gold. 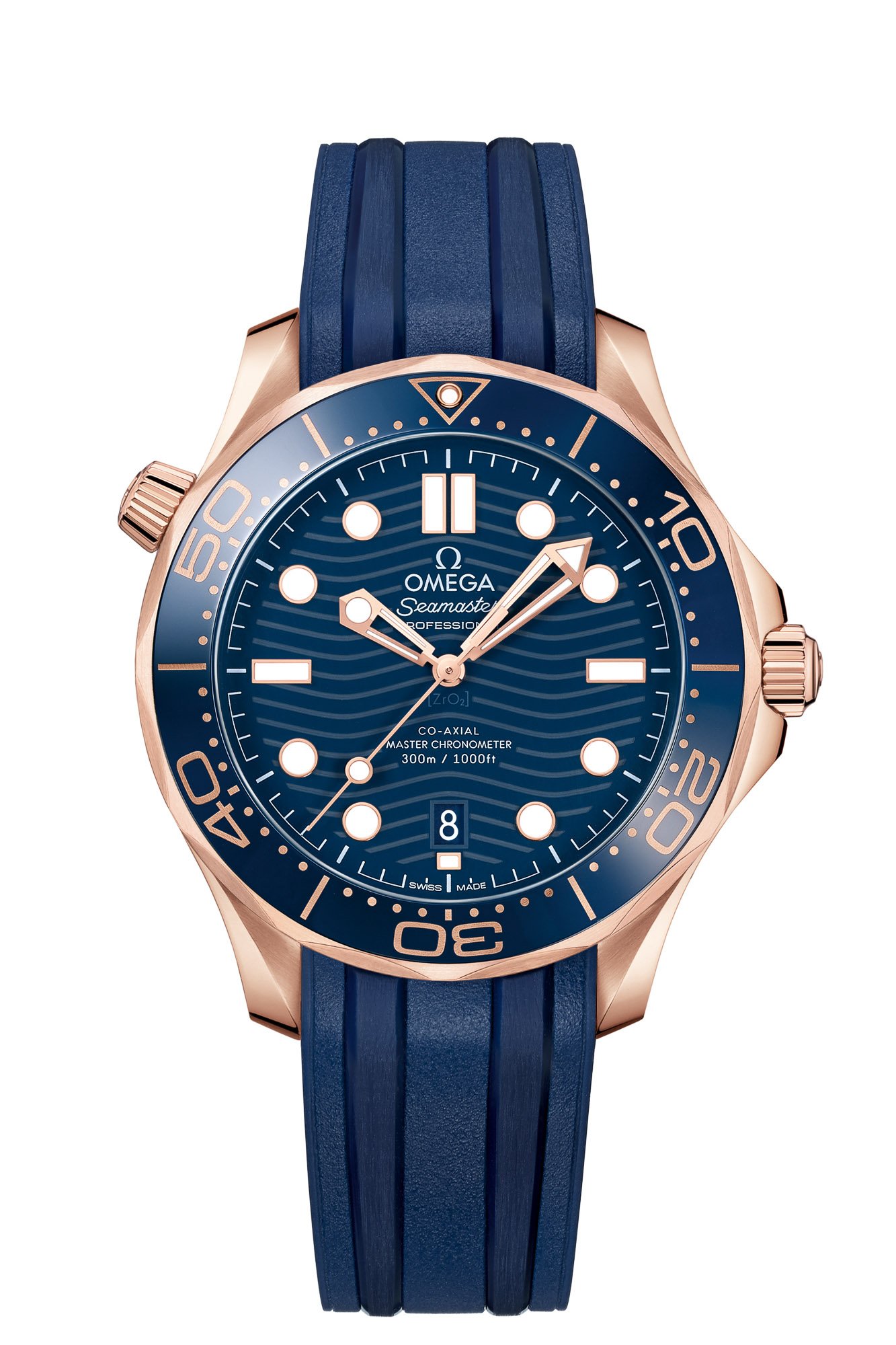 If you’re familiar with the “normal” 300M, then the Omega Seamaster 300M Sedna Gold won’t be a surprise.  The case comes in at 42mm in diameter and all the hardware – case, crowns and bezel – are fashioned in 18K Sedna gold.  For those who aren’t familiar with Omega lingo, that’s a rose gold that will resist tarnishing. 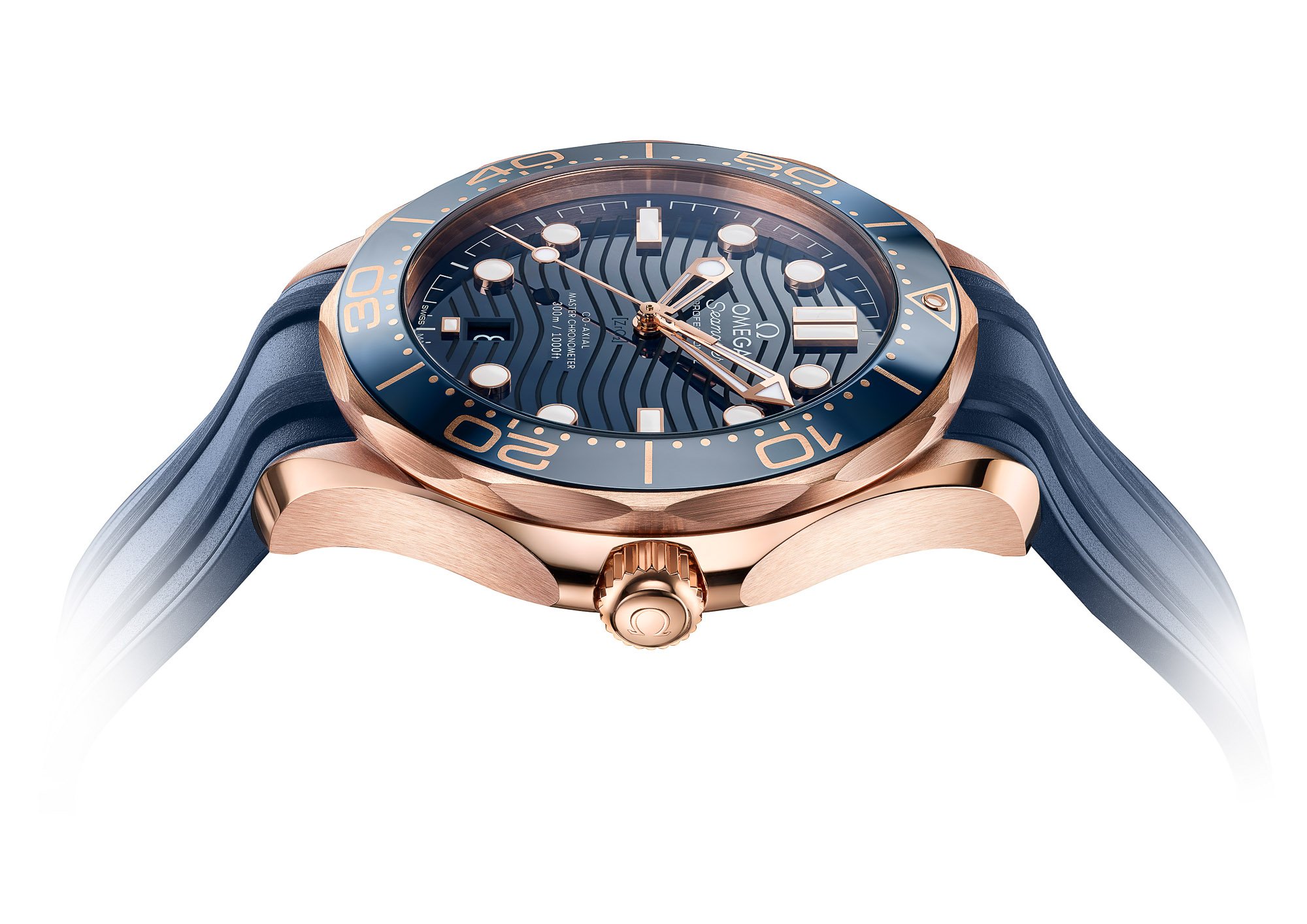 The only dial choice is blue ceramic (with Sedna gold indices) and, naturally, the ceramic bezel insert follows color-wise, but adds Ceragold for the numerals. 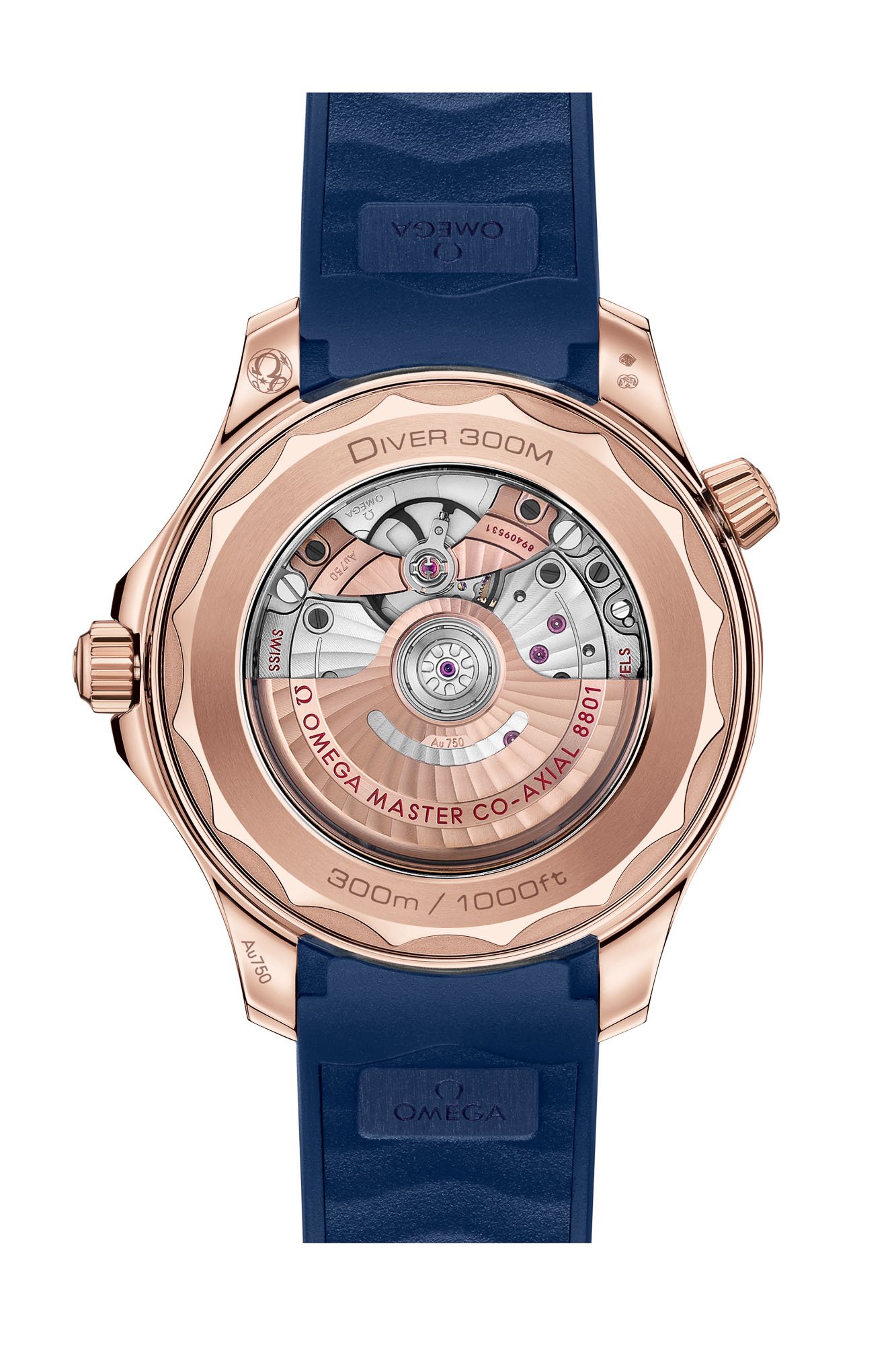 Looking Behind the Curtain

Movement wise, we have the familiar Co-Axial Master Chronometer Calibre 8801 peering out from under a display case back.  On the Omega Seamaster 300M Sedna Gold, though, the rotor and balance bridge is finished in Sedna as well.  As almost all Omegas are converting to a NAIAD lock, all the script around the screw-down case back is always straight. 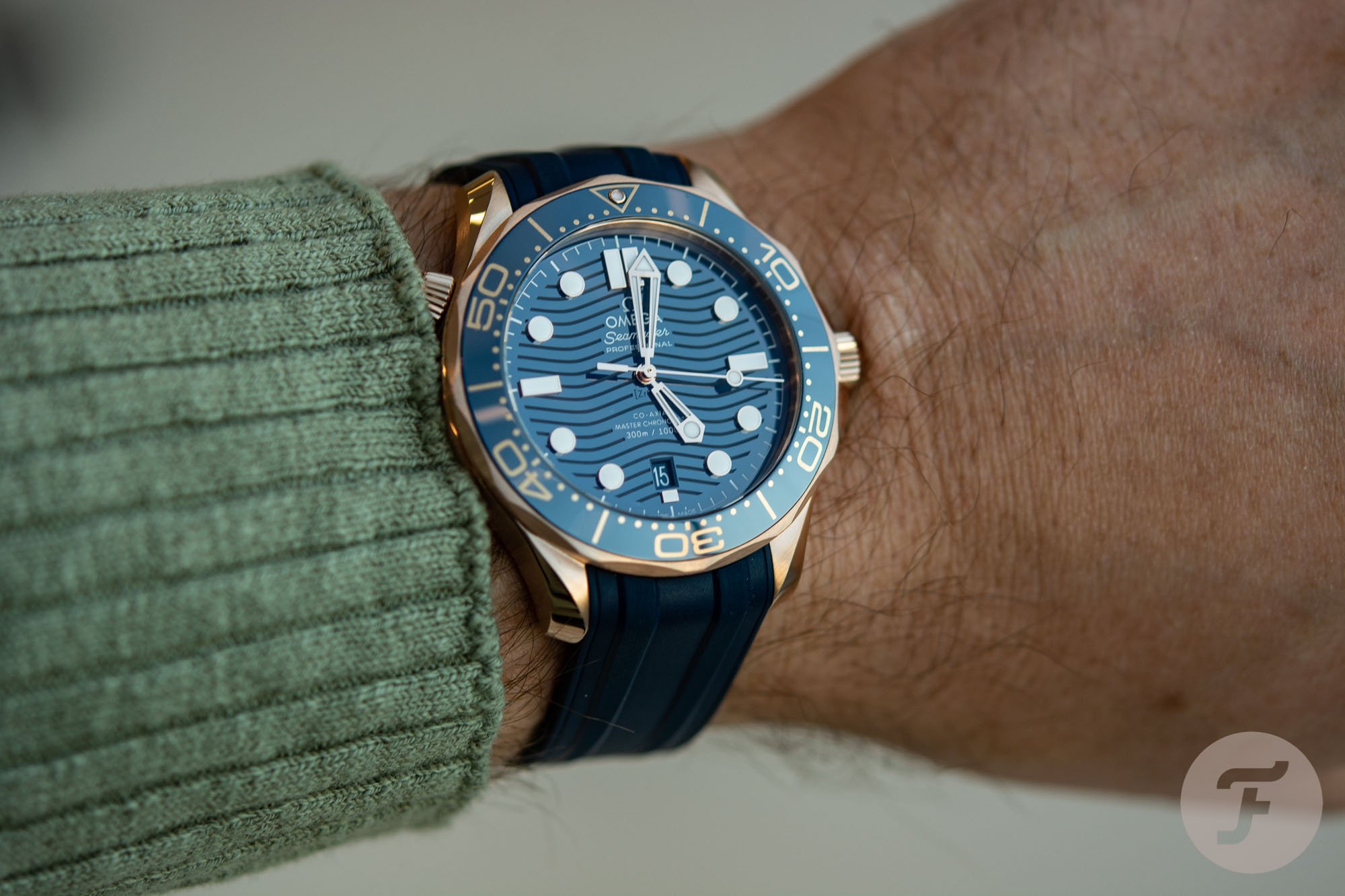 If you enjoy the look and feel of Omega’s rubber straps (and you should), a blue strap is your only choice on the Omega Seamaster 300M Sedna Gold with a corresponding Sedna gold buckle.  It may strike some as an odd choice to not offer a bracelet, but I think the pricing would get so out of hand that there would be very, very few takers.  Incidentally, Omega did offer a full (yellow) gold 300M back in the 90’s (ref. 168.1502) and it featured a bracelet and – there were few takers. 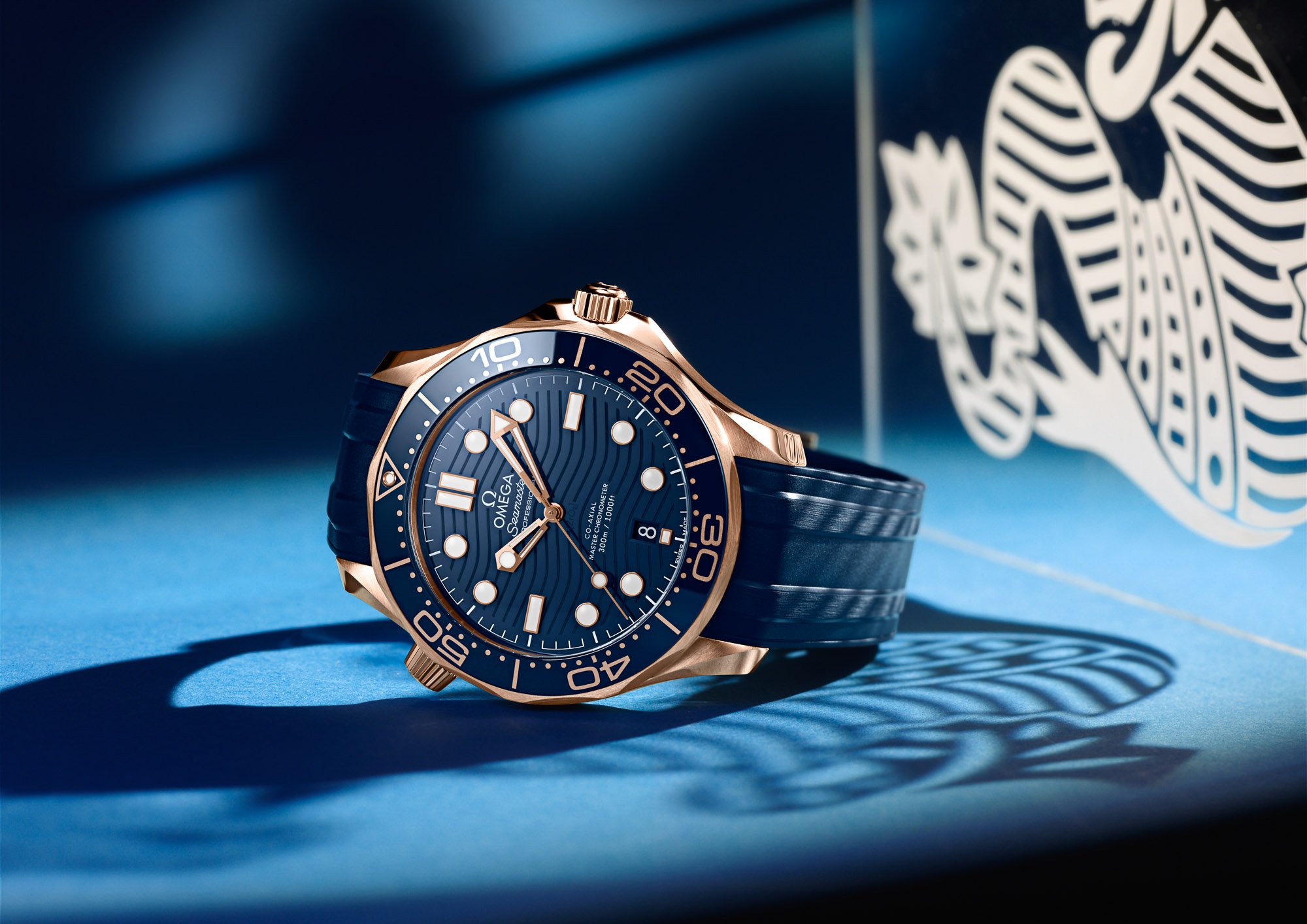 The Omega Seamaster 300M Sedna Gold will retail for 19,500 CHF (ex VAT) and that’s certainly not throwaway money.  That being said, coming in under 20K for a gold watch is a smart move in my view despite it coming on something casual such as rubber.  Of course, one could add any number of leather straps to dress things up, but I think in today’s more casual world it works.  Plus, with so many traveling or working in warm weather climates, this watch should be of interest.  I’d also say that the lack of a full gold bracelet somehow keeps the watch a bit more under the radar and that’s a really good thing if you have any concerns about where you’re heading or don’t want to come off as too flashy. 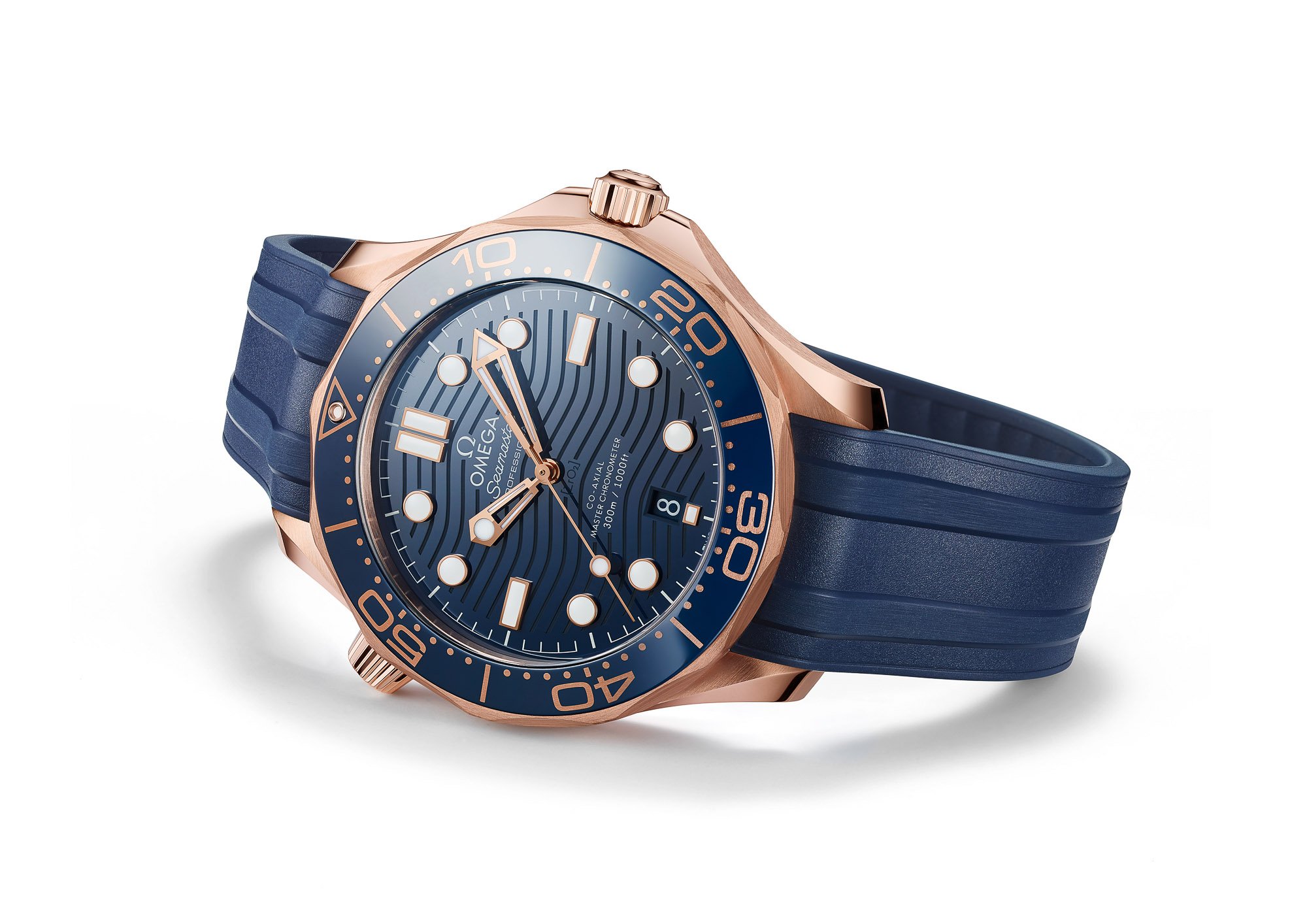 Personally speaking, the Omega Seamaster 300M Sedna Gold was the watch that jumped out at me when looking at this year’s novelties.  Yes, several of us are converted gold bugs and are ordering the gold Speedmaster Apollo 11 50th Anniversary, but this is one striking and clean looking diver.  Sure, just shy of 20 large is a lot of money, but when people are dropping this level of cash for a stainless Pepsi GMT, this is money far better spent in my view.

For more details, head to the official Omega site.