We break down the newest additions to the Panerai Luminor Due lineup.

It’s late August and we have news of five new Panerai Luminor Due models.  That strikes me as somewhat of a curious time of year to release a fairly large number of new models, but with summer over and people now turning their attention to the back end of the year (i.e. the winter and possibly bonus season for some) perhaps the timing makes sense.  Furthermore, it’s probably best to discuss the Due collection, with its oft-maligned 30 meters of water resistance, outside of prime beach and pool season or it may simply serve to feed those rabid keyboard warriors.  And discuss we shall as we break down the five new models and add a bit of history.  Within these five new models, there are a number of “firsts” and unless you are a Panerai expert, those aren’t obvious.  But…we’re here to help. 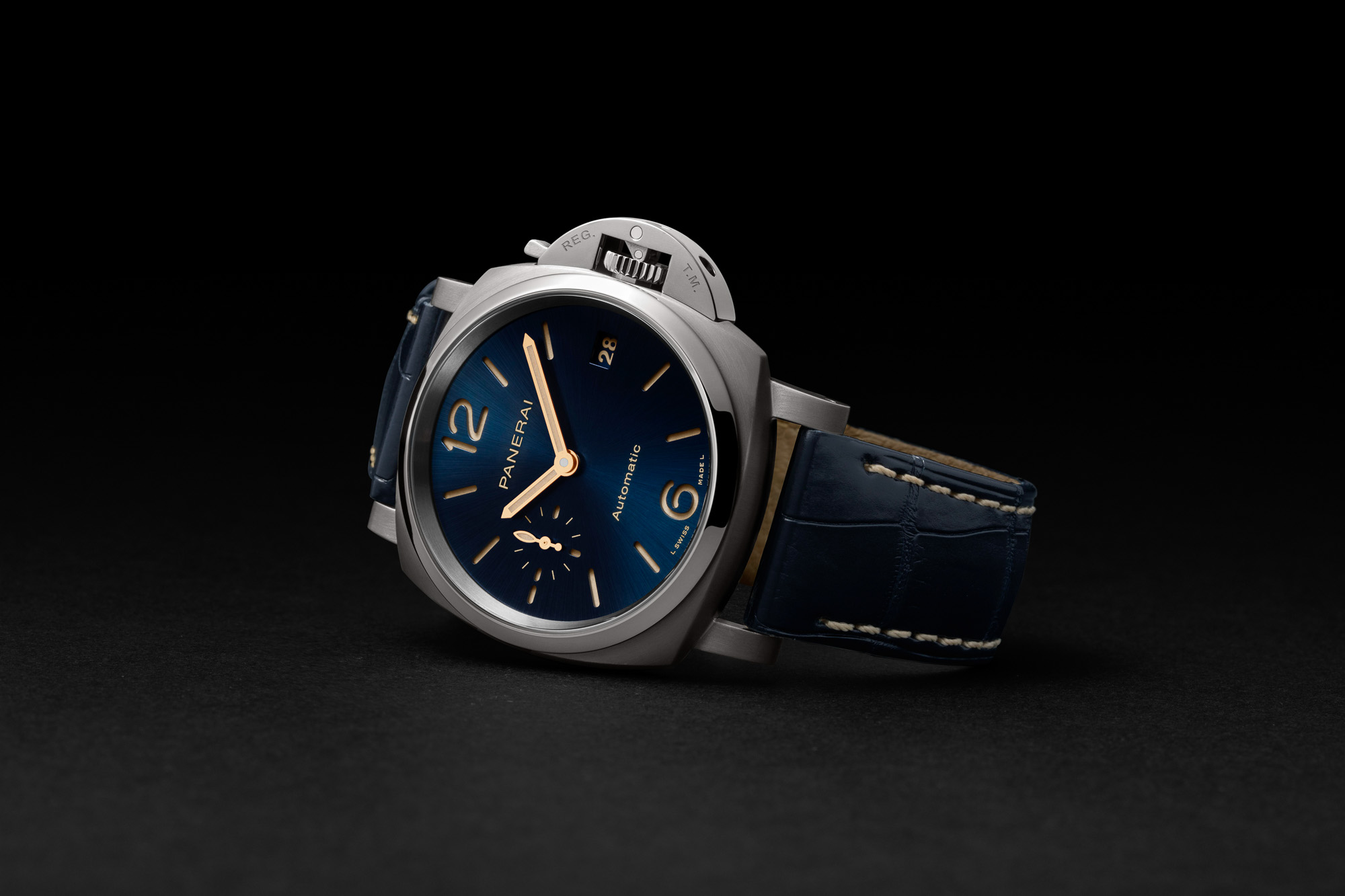 The Panerai Luminor Due Series

The Panerai Luminor Due collection was introduced in 2016 at 42mm, but it was 2018 that brought us the first 38mm models – all with the familiar latch system to lock down the crown.  Now, you didn’t have to be a die-hard Panerai fan to know that a sub-40mm diameter option represented a real departure for the brand.  Yes, a 40mm Luminor Marina option has existed for more than a decade – at times with different dial options available – but it’s a fairly chunky watch and uses an ETA-based automatic.  That PAM1048 is still around and perhaps worth noting because it contains a “true Panerai” 300 meters of water resistance and is priced well within the range of the Luminor Due series.  But with the Due series, we have Panerai’s first targeted attempt at wooing women to the brand.  Plus, no matter what diameter is chosen, the Due watches are slimmer than their more toolish Luminor counterparts and that makes them more suitable for formal occasions.  Regarding “firsts”, we have some exciting news today on the movement front as the brand introduces a new calibre called the P.900.

The P.900 is a new in-house automatic that’s only 4.2mm thick.  It contains a power reserve of 3 days and a date function.  Taking a look at the Panerai Luminor Due collection prior to today’s five releases, it seems that the automatic date models in 38mm and 42mm used the OPXXXIV calibre.  This OP movement is a shared calibre within Richemont and is also in the Baume & Mercier Clifton Baumatic.  Panerai’s plan is to move all former “OP” automatic date movement watches within the Luminor Due line to the new P.900.  We’ll get to pricing later, but there’s no cost increase for the in-house movement over the former OP models.  It’s a bit surprising for Panerai to do an about face after just a short few years, but I can understand a buyer’s desire for movement exclusivity when thinking about laying down his or her hard-earned money. 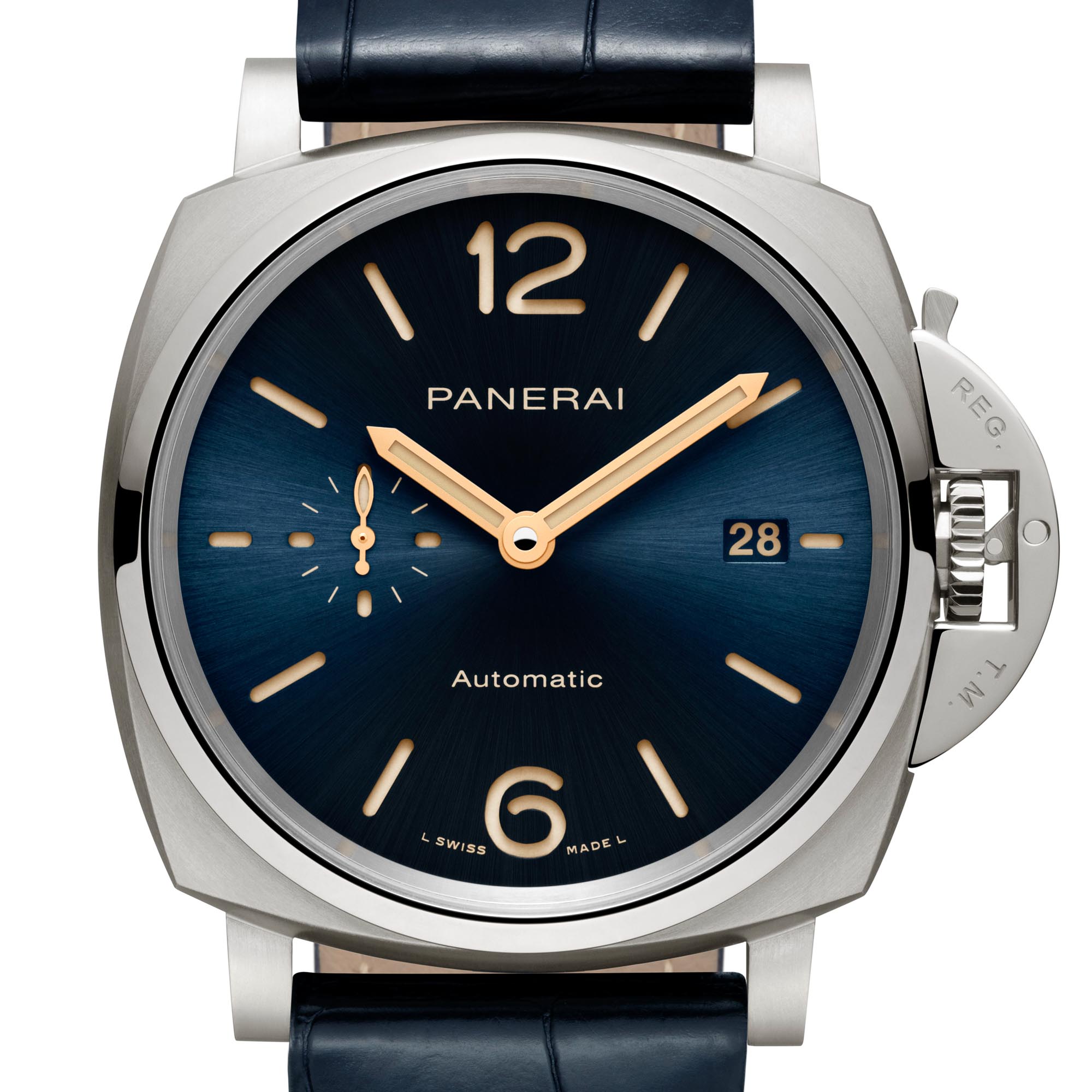 With the PAM00926 and 927, we have the first titanium-cased Panerai Luminor Due models.  Outfitted with dark blue dials containing “satiné soleil decoration” (that sounds like French for “sunburst”), the watches are essentially identical aside from their case diameters.   The 926 is 38mm and the 927 is 42mm and both are brushed.  Due to the size discrepancy, you’ll note that the larger 927 has a hint of a lume marker to the right of the date window.  Speaking of the lume, Panerai employed beige Super-LumiNova in this sandwich dial configuration.  The main hands appear to be gold and the same goes for the running seconds at 9:00. 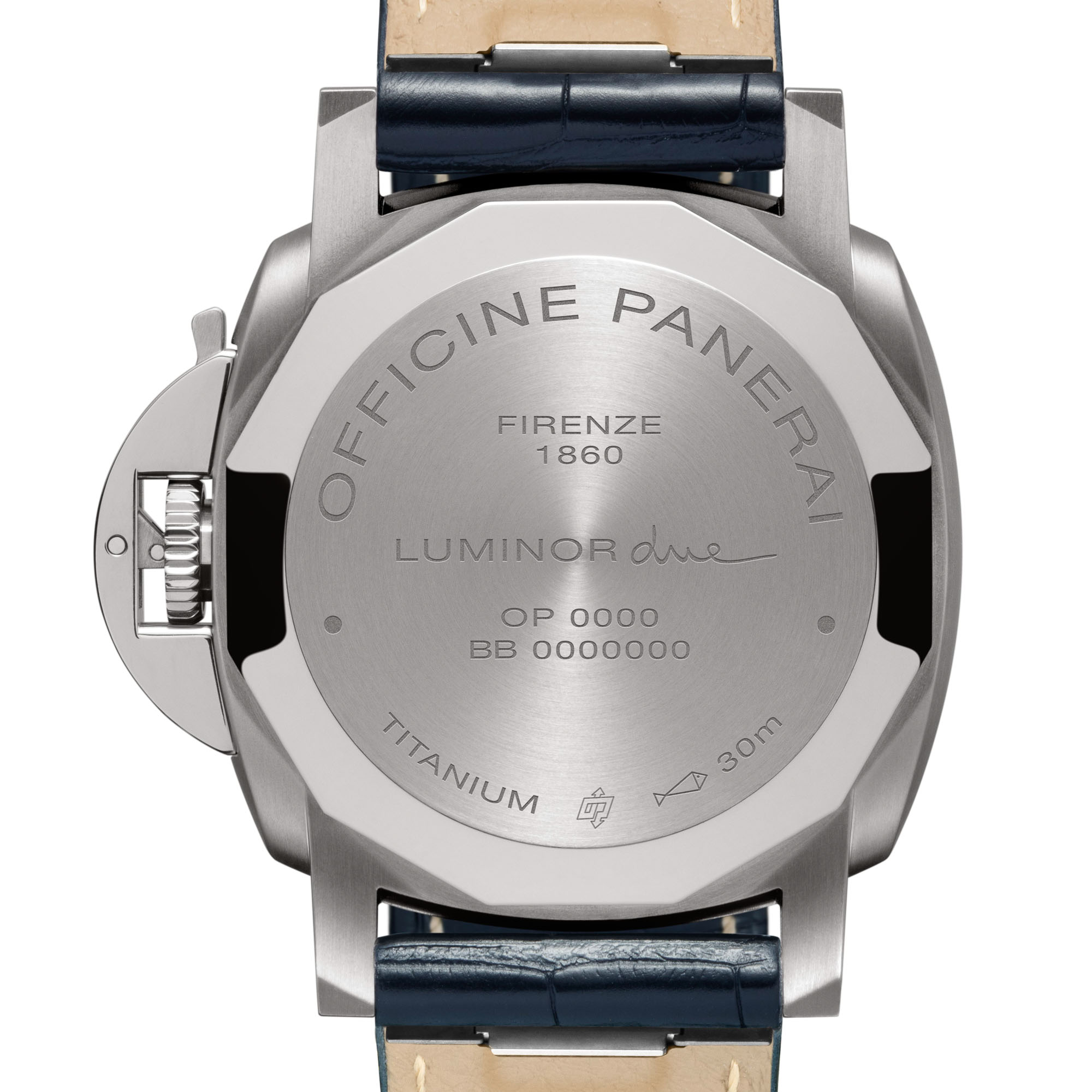 As mentioned above, both of these pieces are fitted with the new P.900 automatic, although it’s hidden beneath a solid titanium case back.  Both pieces also come on matte blue alligator straps and use Panerai’s “quick release” system for easier strap changes.  The clasps are also in titanium.  The PAM000926 will retail for 6,700 Euros and the PAM000927 comes in at an even 7,000 Euros. 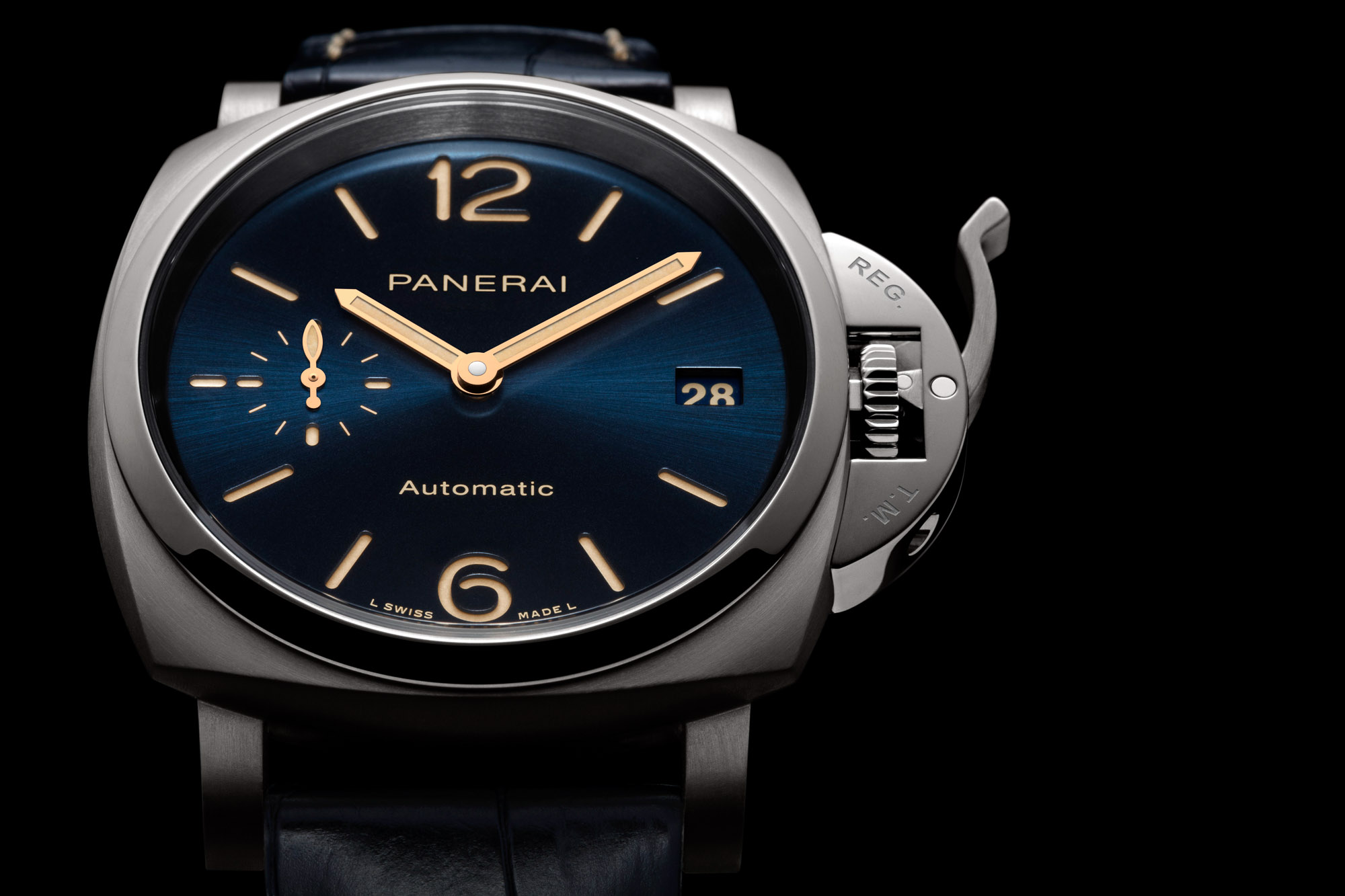 When I report on Panerai, it’s always hard to hold back my admiration for their more simple models and these Panerai Luminor Due pieces fall into that category.  I love the dial design, the crown system and the case shape.  Now, we have a rich blue dial with a warm lume color that I see as more of a stylistic choice versus serving as an ode to faux patina.  Add a new, in-house movement and titanium and these Due models start to become more compelling.  I can only imagine that, whether in 38 or 42mm guise, these slimmer pieces feel really nice on the wrist indeed. 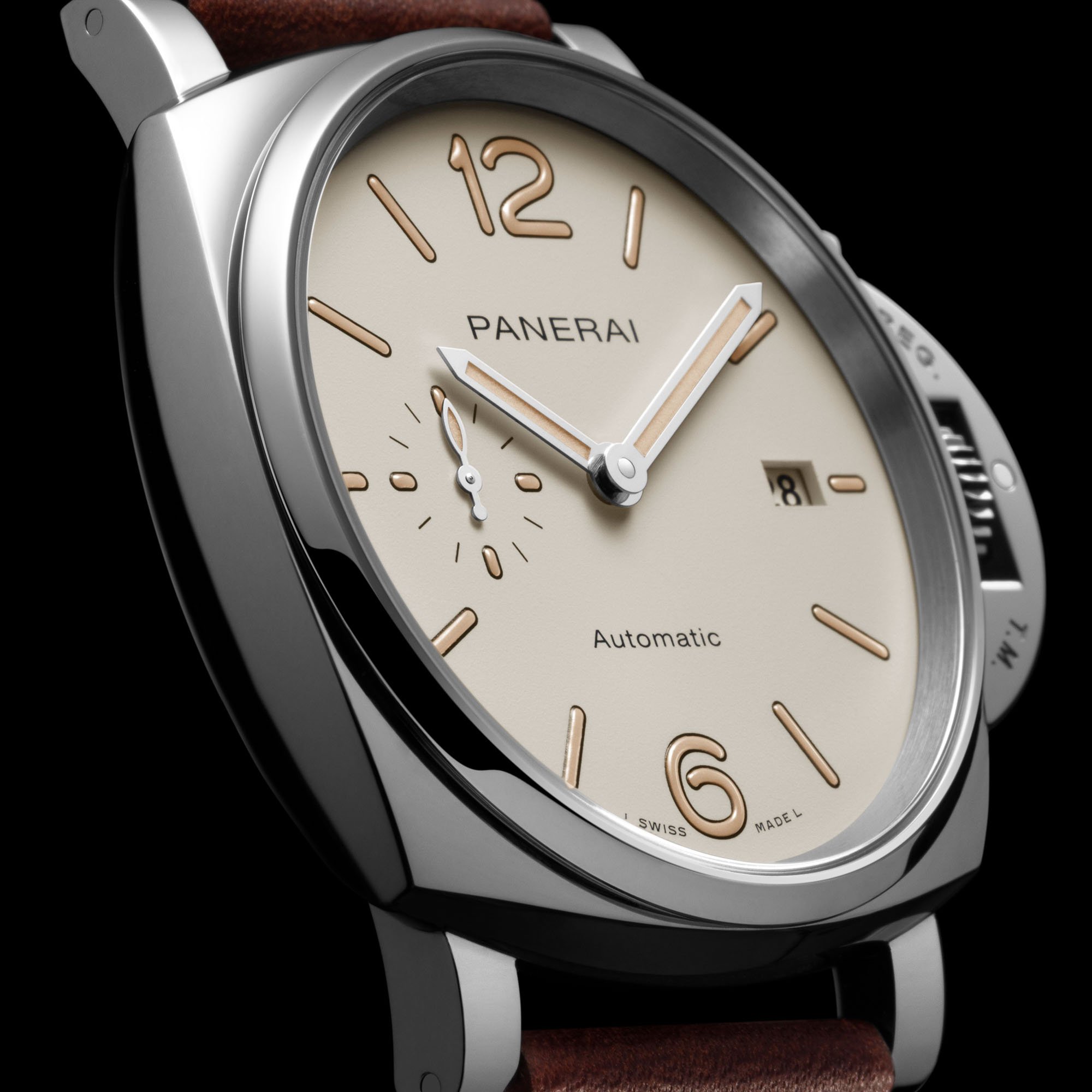 Similar to the blue Panerai Luminor Due models, we get a tandem of watches that differ primarily due to diameter.  The PAM01043 is the 38mm option and the PAM01046 sizes at 42mm.  With these watches, though, polished stainless steel is the chosen case medium.  The white dials also bring beige Super-LumiNova, but the indexes are printed and surrounded by black.  The hands are case-colored and the straps are taupe calf leather.  Once again, the movements used are the new caliber P.900 and they sit behind a solid case back.  The PAM01043 retails for 5,900 Euros and the PAM01046 will sell for 6,200 Euros. 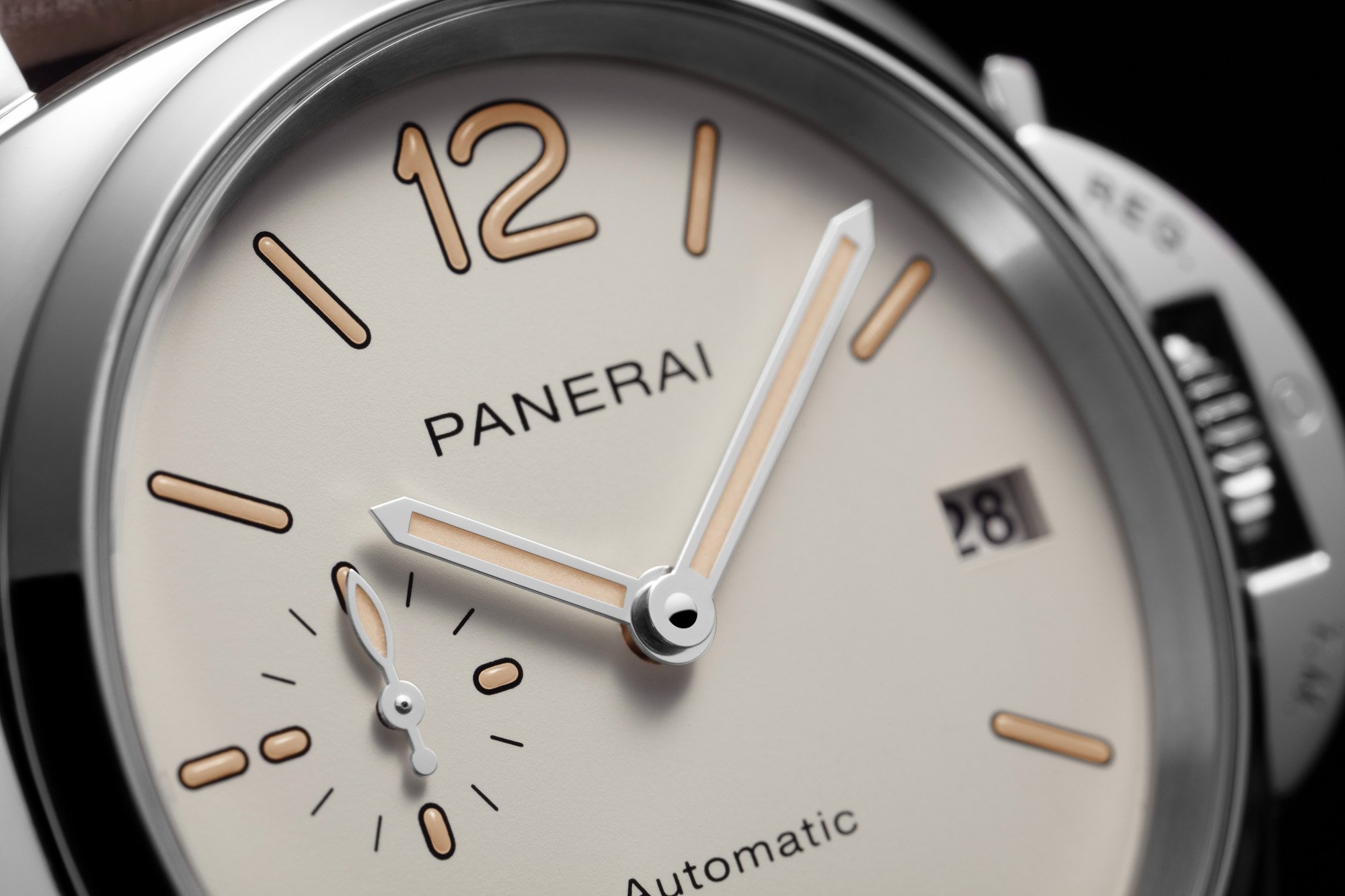 Here again, I’m a fan of these Panerai Luminor Due pieces.  And while my choice would likely lie more towards the blue titanium versions, these white-dialed watches likely add some more visual mass.  After all, white isn’t exactly slimming!  Plus, with shinier cases, these will stand out a bit more.  Of course, the quick release strap system will allow for different strap options and it would be interesting to see them paired with more contrast. 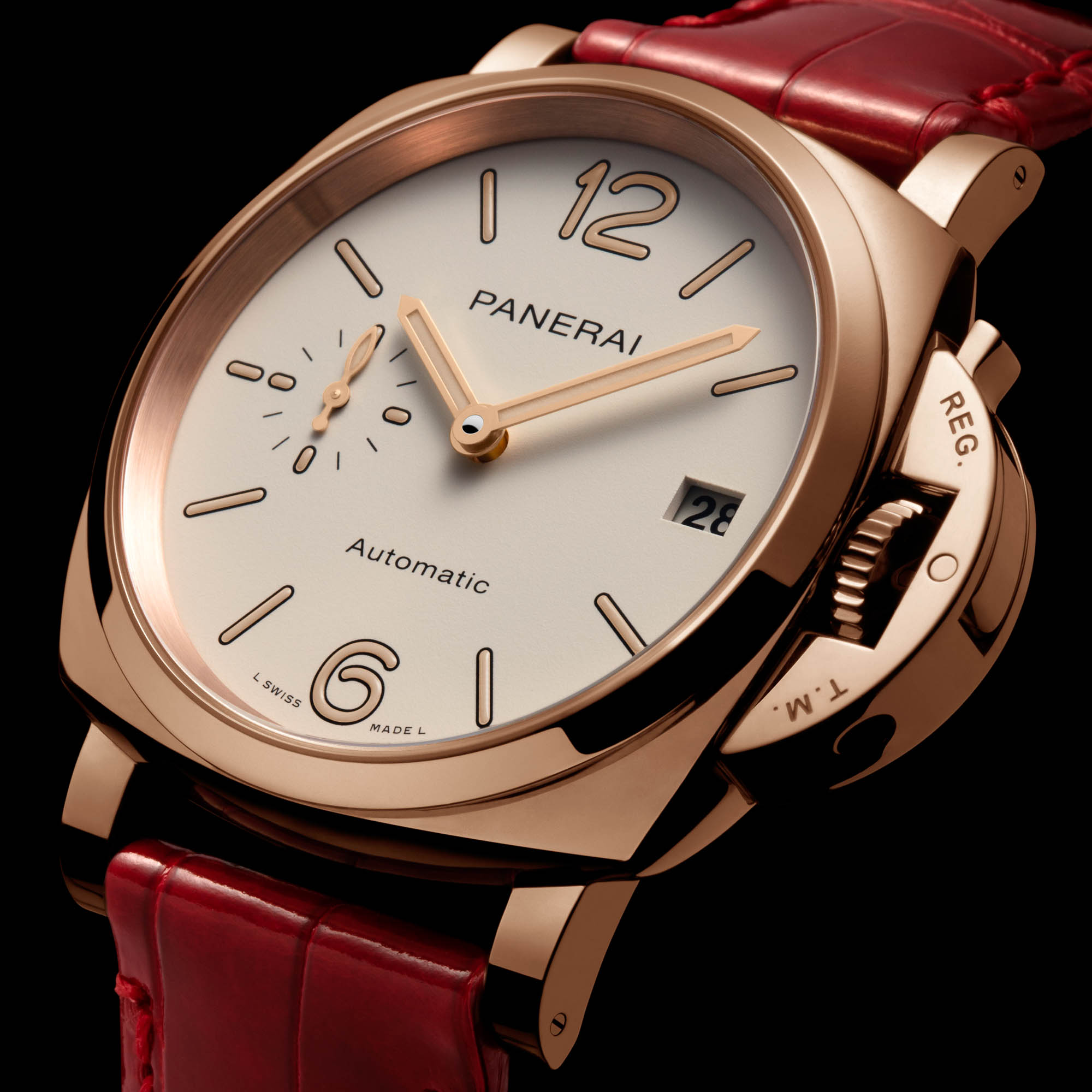 The Panerai Luminor Due PAM01045

The next new Panerai Luminor Due is the PAM01045 and this one is a different piece in terms of material and pricing.  The 1045 is a 38mm piece using the brand’s proprietary “Goldtech” case material.  Goldtech is 18K gold with a blend of copper and platinum that creates a warmer look while resisting tarnishing.  Think of Omega’s “Moonshine” gold and you’re on the right track, but whereas Omega went in a lighter direction, Panerai chose a redder hue.  This hue is balanced with a polished red alligator strap.  The white dial, on the other hand, is very similar to the white-dialed pieces above.  The only difference is in the hands as they’re gold to match the case.  This will be our first chance to view the P.900 as this watch will have a sapphire display back within a Goldtech screw down case back.  The retail price for the PAM01045 will be 14,900 Euros.  This is a beautiful watch and in pairing it with a bold red strap, it seems that Panerai is marketing it towards females – which is still a refreshing strategy to see from the brand. 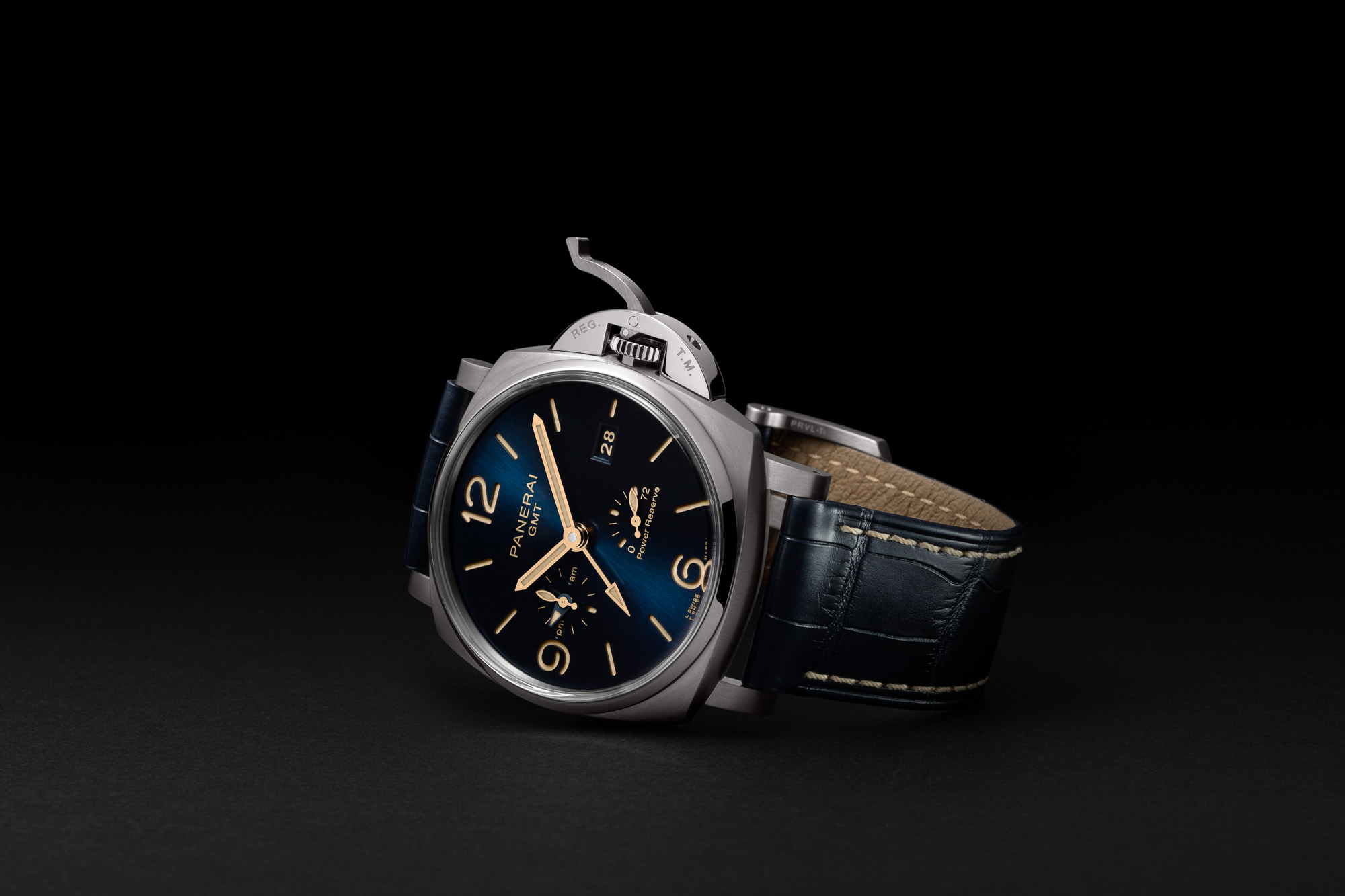 The Panerai Luminor Due PAM00964

With the PAM00964, we have a more complicated addition to the Panerai Luminor Due line.  At 45mm in titanium, the 964 uses Panerai’s in-house P.4002 caliber automatic.  This micro-rotor movement contains a GMT function, am/pm display at 9:00 and a power reserve display on the front of the case showing a scale of up to 72 hours.  While this isn’t Panerai’s first 45mm watch, the Due actually introduced 45mm cases to the brand.  This is the first time we see a titanium GMT Due.  The dial is similar to the aforementioned blue-dialed watches with its sandwich construction.  A blue alligator strap accompanies the watch.  The PAM00964 will sell for 11,800 Euros. 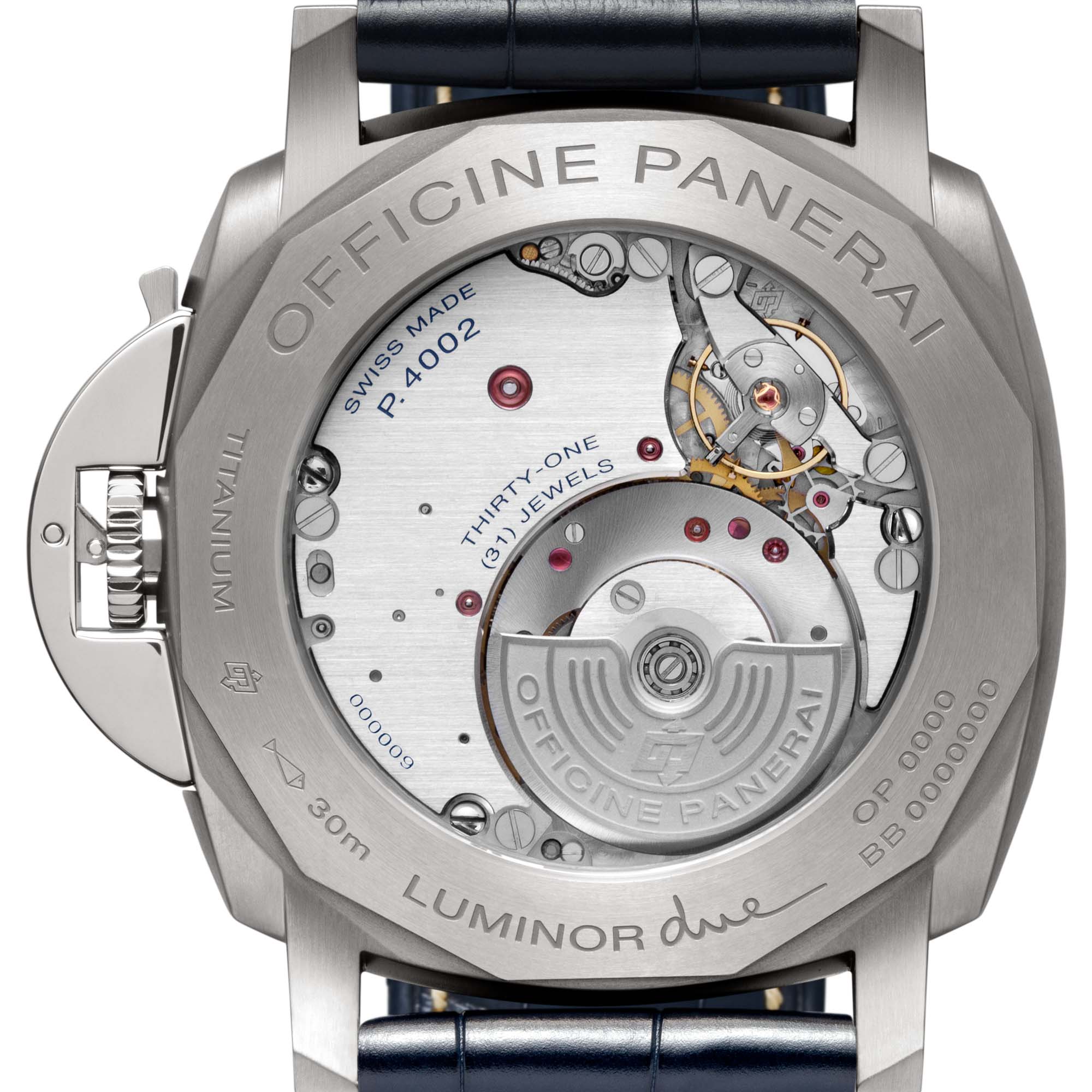 Of the six new Panerai Luminor Due watches, the PAM00964 is probably my least favorite, but that’s due to the dial complexity.  Whether today or 20 years ago, I’ve always struggled to turn my attention away from the more basic models from the brand.  That being said, it’s an elegant watch that should appeal to those looking for a dressy Panerai aesthetic with a bit more functionality under the hood. 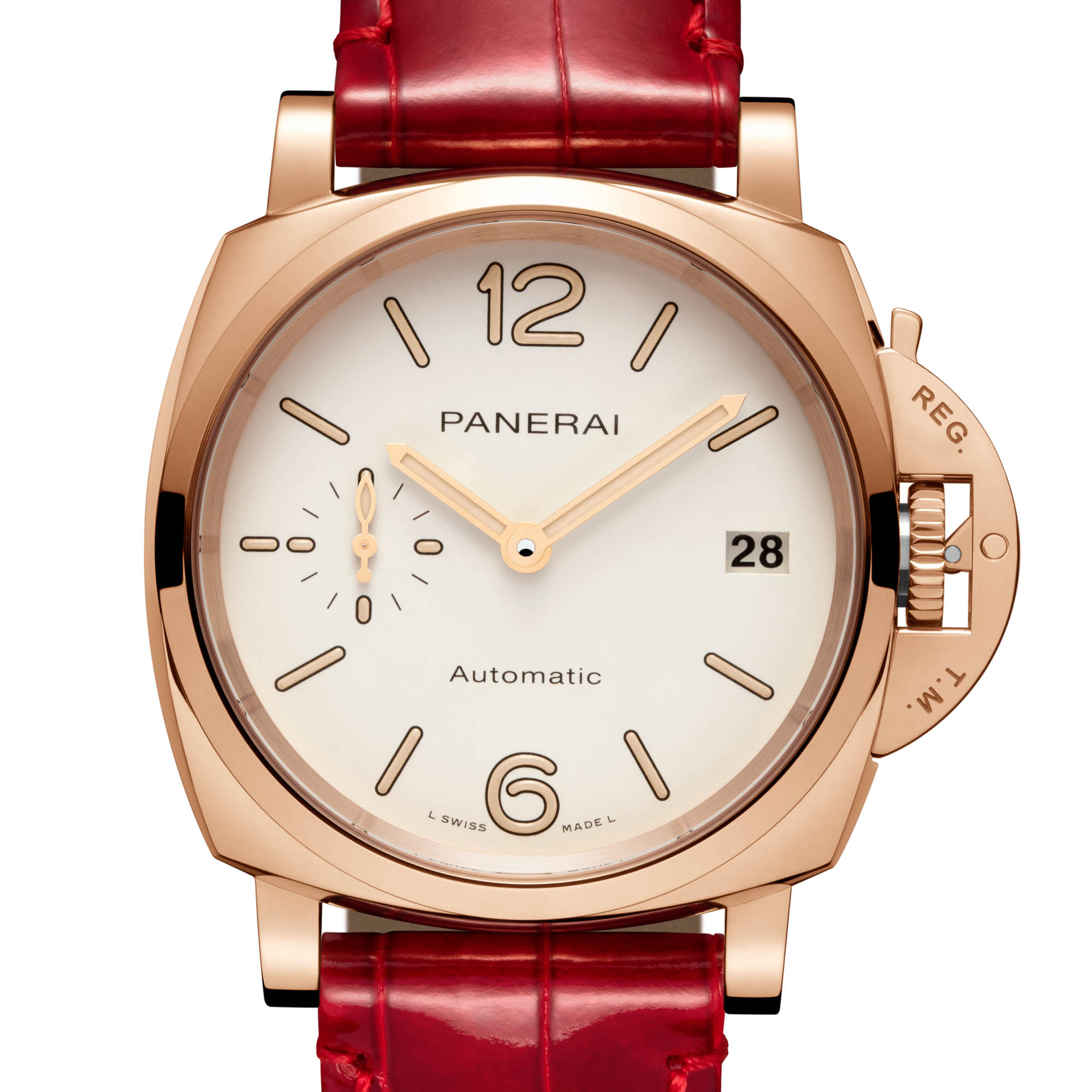 We expect these Panerai Luminor Due models to begin shipping any time as some are already present on the brand’s official site.  I’ll be requesting one of the blue-dialed models for an in-depth review.  Stay tuned…

For more information on the Panerai Luminor Due watches, visit the brand’s official site.