Interview With Nick Manousos, Director Of The Horological Society Of New York

Today, we welcome Nick Manousos to Fratellowatches.com. Nick is a watchmaker, writer, and the current director of the Horological Society of New York.

Rob Nudds: Hi Nick, thanks for sitting down with us at Fratellowatches.com. As director of the HSNY you must get asked this a lot, but would you mind telling me where your watchmaking journey began?

Nick Manousos: Hi Rob, thanks for thinking of the Horological Society of New York! My watchmaking journey began in 2010. I was living in San Francisco and working in the tech industry as a software engineer. I had a great job but was beginning to realize that I did not want to spend my life writing code and building websites.

My wife encouraged me to consider other possibilities outside of the tech industry. Soon, I was on a flight to Miami to interview at the Swatch Group’s Nicolas G. Hayek Watchmaking School. After meeting my future instructor, Paul Madden, I knew that watchmaking was what I wanted to do. I returned to San Francisco, started packing, and we moved to Miami. The rest is history! 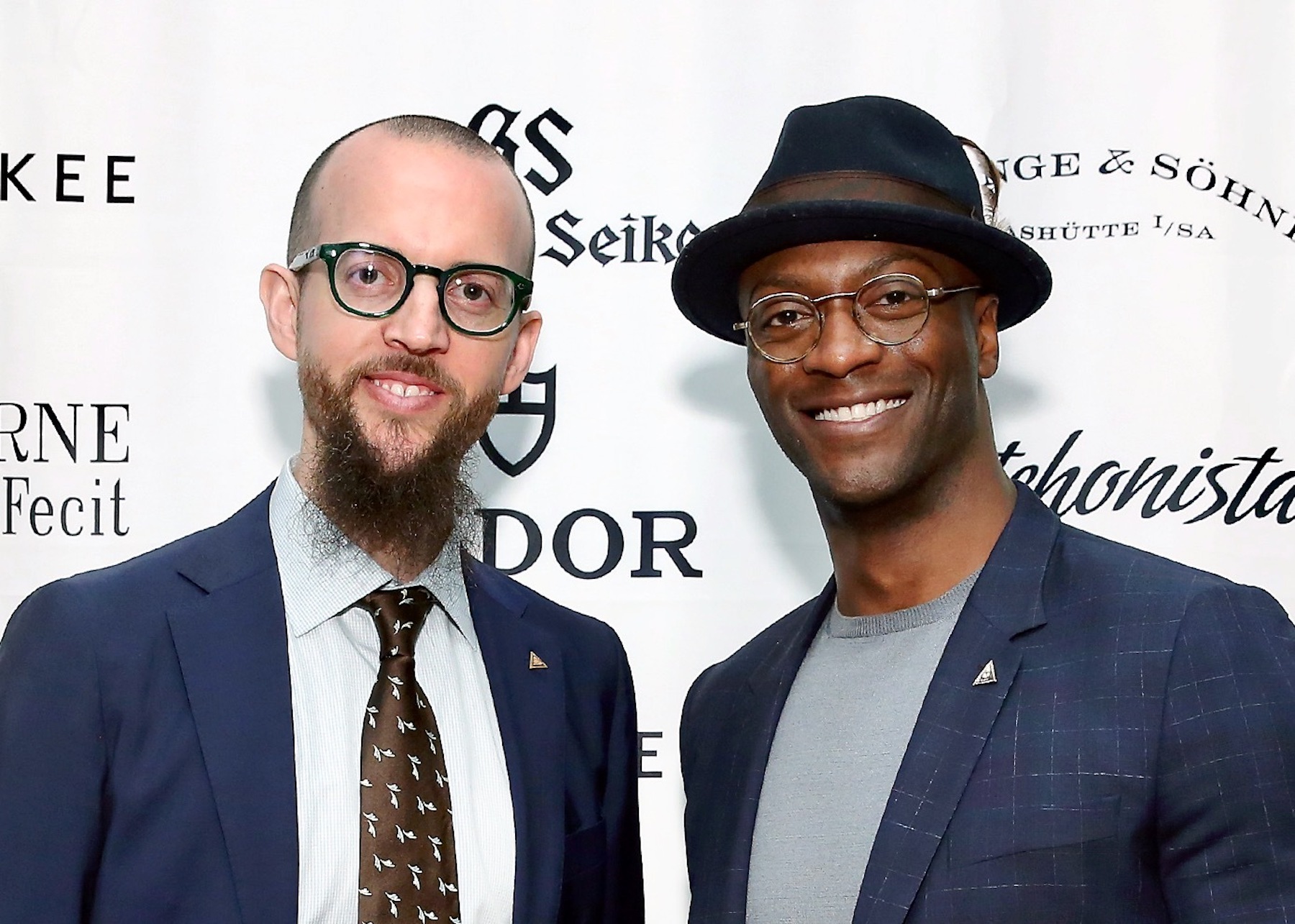 RN: How have you found working for Hodinkee? That must have exposed you to a lot of really interesting people and topics?

NM: I still write for Hodinkee, but on a part-time basis. I remember the first time I met Ben Clymer and Stephen Pulvirent back in 2014. I had just finished work on my 3D printed “Tourbillon 1000%”, a scale model of the mechanism with a co-axial escapement, and brought it to their office for photography and an interview.

After the article published I kept in touch with Ben, and soon joined the Hodinkee team on a full-time basis as Technical Editor. I am incredibly happy for the Hodinkee team and what they have achieved. I remember when I joined the team, there were four employees. Now, Hodinkee employs more than 50 people and is continuing to grow and innovate.

RN: What aspects of horology appeal to you the most? Are you more interested in the technical side of things, the aesthetic, the philosophical, or something else?

NM: Definitely the technical side of things, specifically escapements. During New York’s quarantine, I built a Fasoldt co-axial escapement for a wristwatch movement. The fact that you can ask this question proves how broad a field horology is. No matter what someone’s personal interest is, there is something in horology for them. George Daniels often described the various qualities of timekeepers — they are historical, intellectual, technical, aesthetic, useful, and amusing. I don’t think there are many other objects in the world that can boast all of these qualities in one compact package. 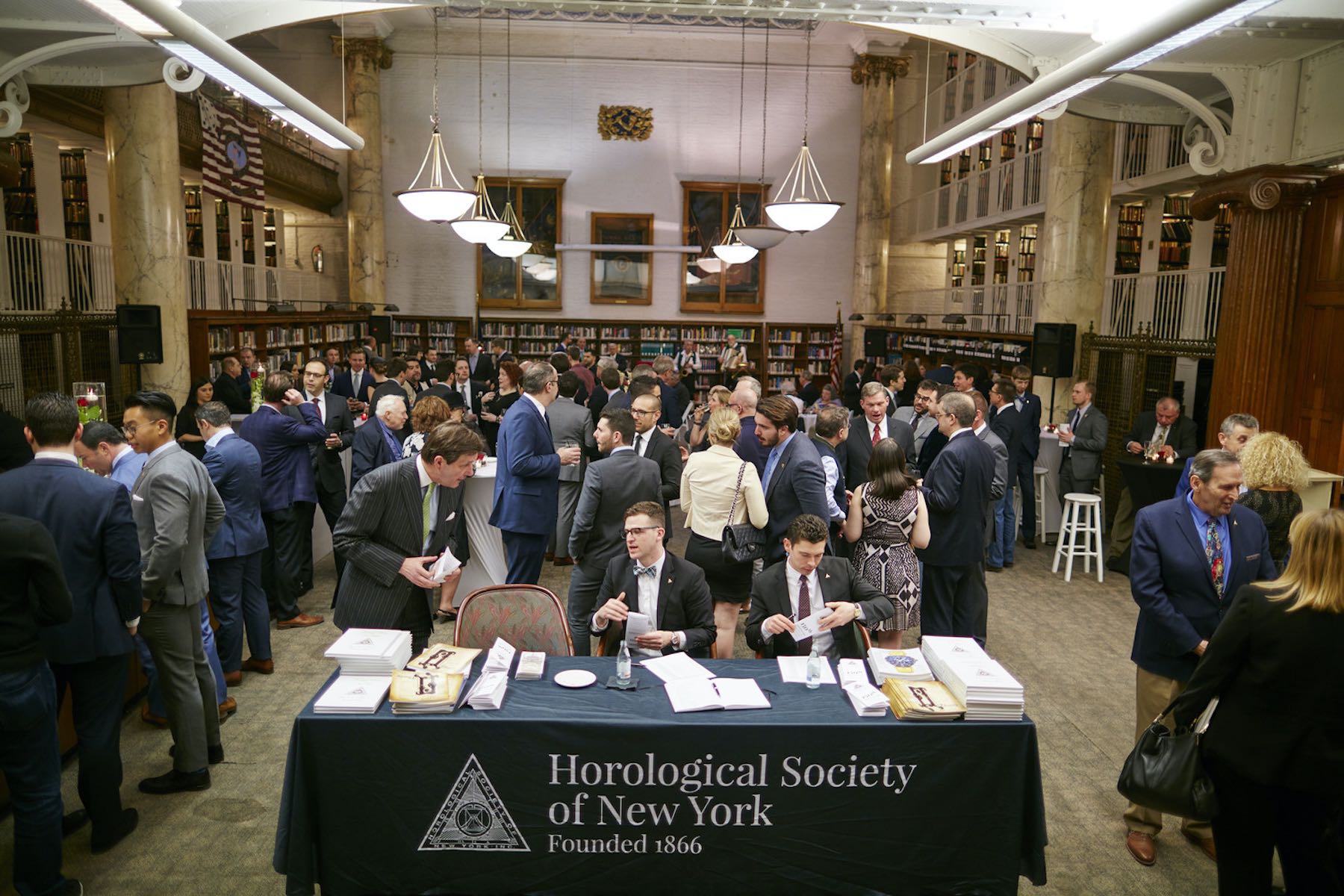 RN: Working at the HSNY must bring you into touch with the finest watchmakers of this generation. Whose work impresses you most and why?

NM: The watchmakers that appeal to me are those that are pushing things forward from a technical perspective. I appreciate fine finishing, special dials, and celebrity ambassadors, but seeing a brand put serious effort towards new technical solutions piques my interest most. I’m sure you will notice that I am not naming any specific watchmakers…

A large part of the reason why the Horological Society of New York has been so successful over its 154-year history is that it has always existed as a neutral organization. Today, HSNY is a registered 501(c)(3) non-profit, with a mission to educate the public on horology. So as you can guess, I need to approach questions like this from a neutral perspective and we truly feel there is space for everyone in the industry.

RN: Of all the great lecturers you’ve had pass through your doors, which three really stand out and why?

NM: In March 2020, François-Paul Journe lectured. This was a memorable night, as it was only a week before New York’s quarantine started. The news was starting to become concerning, and I was nervous to see if anyone would show up. We had one of our largest lectures in modern history, with more than 200 people in attendance. It will be a while until we can do a large in-person lecture like that again.

In December 2017, Roger W. Smith lectured. That night stands-out to me due to the large number of watchmaking students that were in attendance. Almost all of the students from the Patek Philippe School in New York were there, as well as the Rolex Lititz Watch Technicum. I remember welcoming the students in my opening remarks and encouraging them to apply for our scholarship program. After the lecture, an attendee decided to anonymously donate $100,000, immediately quadrupling our scholarship offerings. 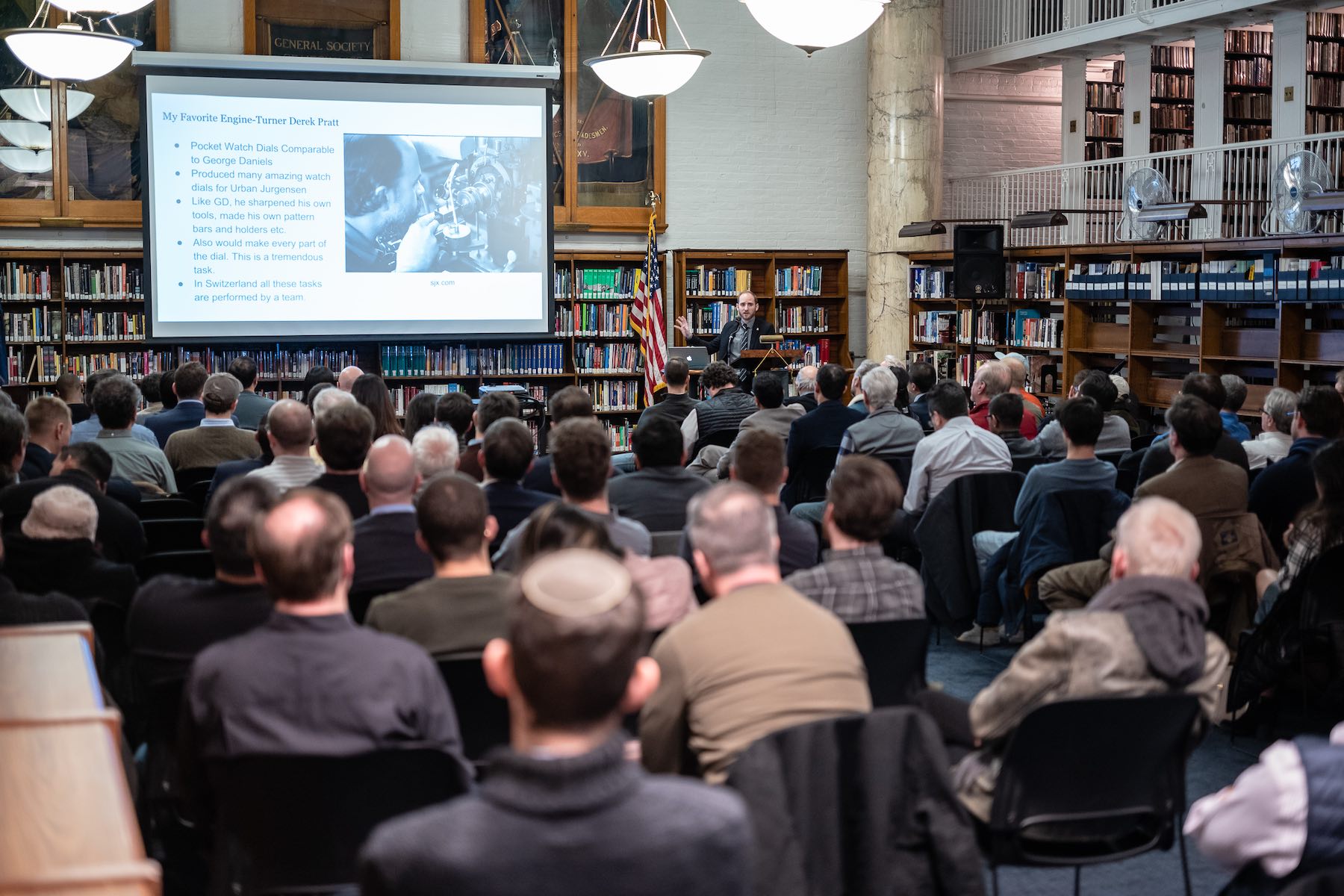 In November 2016, Dr. Demetrios Matsakis, the Chief Scientist for Time Services at the U.S. Naval Observatory lectured. I enjoyed this lecture very much, as Dr. Matsakis discussed the nature of time from a physics perspective. The majority of HSNY’s lectures today focus on mechanical watches, but it is nice to take a diversion from this every once in a while. After all, the name is the Horological Society of New York, and not the Wristwatch Society of New York.

RN: When was the last time you learned something new about horology?

NM: Recently, I learned about Benjamin Banneker’s contribution to early American horology. I knew of Banneker before but did not know of his clockmaking work. Banneker built one of the first wooden mechanical clocks in North America in 1753. This clock was modeled after an imported pocket watch that he disassembled and studied. Today, Banneker is honored with many schools, streets, recreational and cultural facilities named after him. Also, in 1980, the US Postal Service honored Banneker with a postage stamp. I hope that the Horological Society of New York can do something to honor Banneker’s incredible life in the future.

RN: How many of the books in HSNY’s extensive library have you read?

NM: Plenty, but not enough! When dealing with such an old organization, we’re happily tasked with making sure our Society remains true to its mission to advance the art and science of horology through education. We’ve recently undertaken an important project to reinforce our library to support our mission, and we look forward to sharing major announcements in 2021.

RN: What kind of watch gets you excited?

NM: Vintage American pocket watches are particularly appealing to me. The finishing on these watches is incredible; they exhibit a very distinctive style that is not seen often elsewhere. I really enjoy finding American pocket watches on eBay, perhaps not in running condition, and bringing them back to life. Seeing a large bi-metallic split balance begin to oscillate at a leisurely 18,000 vibrations per hour is very satisfying. And perhaps the best bit: they are incredibly underpriced!

RN: What are you wearing right now? 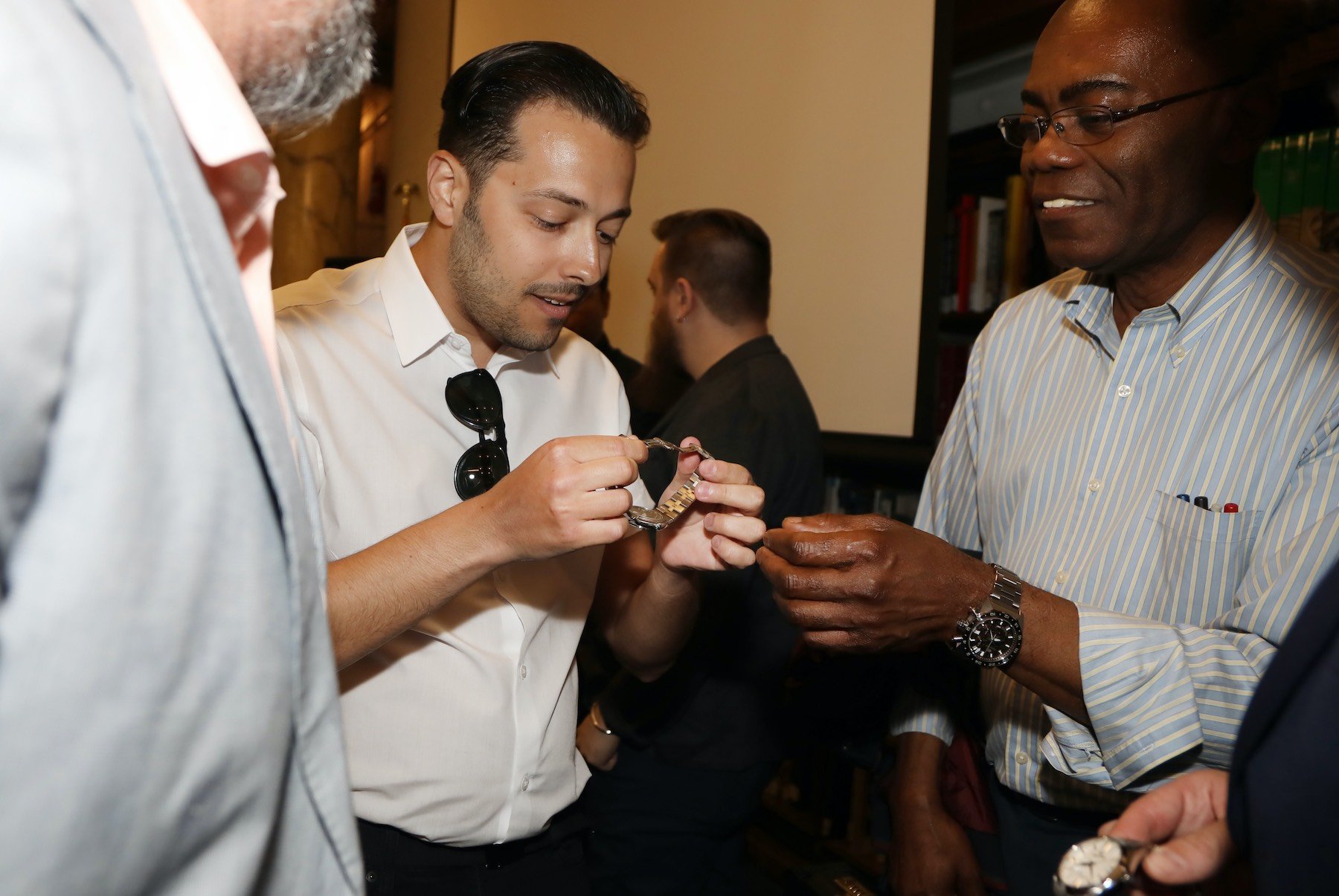 RN: If you could travel back in time and work with any watchmaker from history, who would it be? And you’ve got to deal with the politics of the day too, so hanging around with Czapek might not be the safest option…

NM: George Daniels. Daniels’ life and work have been a huge influence on me. I remember being at watchmaking school in Miami on October 21, 2011, when our instructor told us the news of his passing. I hope that he would be happy with the work that HSNY is doing today to promote watchmaking education.

RN: Does HSNY have any plans to release its own watch?

NM: We are working on ways to offer our members a more hands-on experience with HSNY — stay tuned!

RN: If you were starting your own brand (a la MB&F) and you had to assemble a super-team of watchmakers/designers/engineers, who would you draft in to help you? You can pick whoever you want for whatever task. For example, you might have Roger Smith making the dials, Sarpeneva making the hands, Forsey making the tourbillon, Journe making the case, and so on…

NM: I will use an American perspective to answer this great question! For the dials, Joshua Shapiro. For the design, Aldis Hodge. I’d take David Walter and Roland Murphy for the movement. For the case, Ian Schon. And for the finishing, Keaton Myrick.

RN: Has your interest in watchmaking changed you as a person? Does it make you look at things in a different way?

NM: Absolutely, it has caused me to be more considerate of time. Time is the common denominator for us all, no matter who you are or where you live. In my previous career in the tech industry, the focus was on the short term. What new feature will we launch tomorrow? What bug can we fix today? In watchmaking, the focus on the long term feels much more relaxed and also sustainable. An example: at a recent HSNY board meeting, we were discussing goals for the HSNY’s 200th anniversary, in 2066. Most of us at that meeting will likely not be around for this anniversary, but that doesn’t stop us from planning for it now.

RN: Why do you think watchmaking is important?

NM: Watchmaking is important because time is our most precious commodity. Beyond the philosophical aspects of watchmaking, it is simply a great career! I would certainly encourage anyone considering a career switch to watchmaking to go for it — you won’t regret it.

Hot Topics
Laventure Automobile Chronograph With A Proprietary Movement — Marking A Huge Leap Forward For One Of The Industry’s Most Promising Brands
155 comments
Fratello Exclusive: An Inside Look At The MoonSwatch Production Facilities
75 comments
We Talk To Swatch Group CEO Nick Hayek About The MoonSwatch
50 comments
Selling Your Watch To A Dealer Or Trading It In — Tips From A Former Watch Dealer
49 comments
Summer Splash — Round 2 : Jorg’s Tudor Pelagos FXD Vs. Lex’s Hublot Big Bang Integral Ceramic Sky Blue
47 comments
Popular
Certina DS PH200M – Hands-On Review
Balazs Ferenczi
21
You Asked Us: Rolex Submariner vs Omega Seamaster
Robert-Jan Broer
22
Hands-On With the Seiko Prospex SRPC91K1 – Save The Ocean
Robert-Jan Broer
15