We didn’t have to wait long to witness the continuation of 2022’s watch collaboration trend. It’s month one of 2023, and we already have our first release to combine the efforts of two independent British brands. Maybe it has been the mantra since the pandemic that companies are “stronger together,” but it’s always exciting to see the creation of combined efforts. The Fears Christopher Ward stands for more than “brand × brand.” The goal of the collaboration is to celebrate and raise awareness of the Alliance of British Watch and Clock Makers. So much so that the new Alliance 01 timepiece is only available to club members of the Alliance and at a limitation of 50 pieces.

Since its founding in 2020, the Alliance of British Watch & Clock Makers has aimed to showcase the watchmaking resurgence in the British Isles (including the Republic of Ireland). Britain was once a dominating force in watchmaking during the 16th and 17th centuries. In the 18th century, Switzerland took over as the leader in watch production and still is to this day. During the 1970s quartz crisis, many British watch marques went defunct, including Fears in 1976. However, since the 1990s, the provenance of watch brands from the British Isles has been gaining traction. From the turn of the millennium, the works of George Daniels and later Roger W. Smith reinstated hand-made atelier watches. With Bremont and Christopher Ward providing more mainstream wristwatch options from Britain since the early 2000s, there has been a real boom in the popularity of British watches. 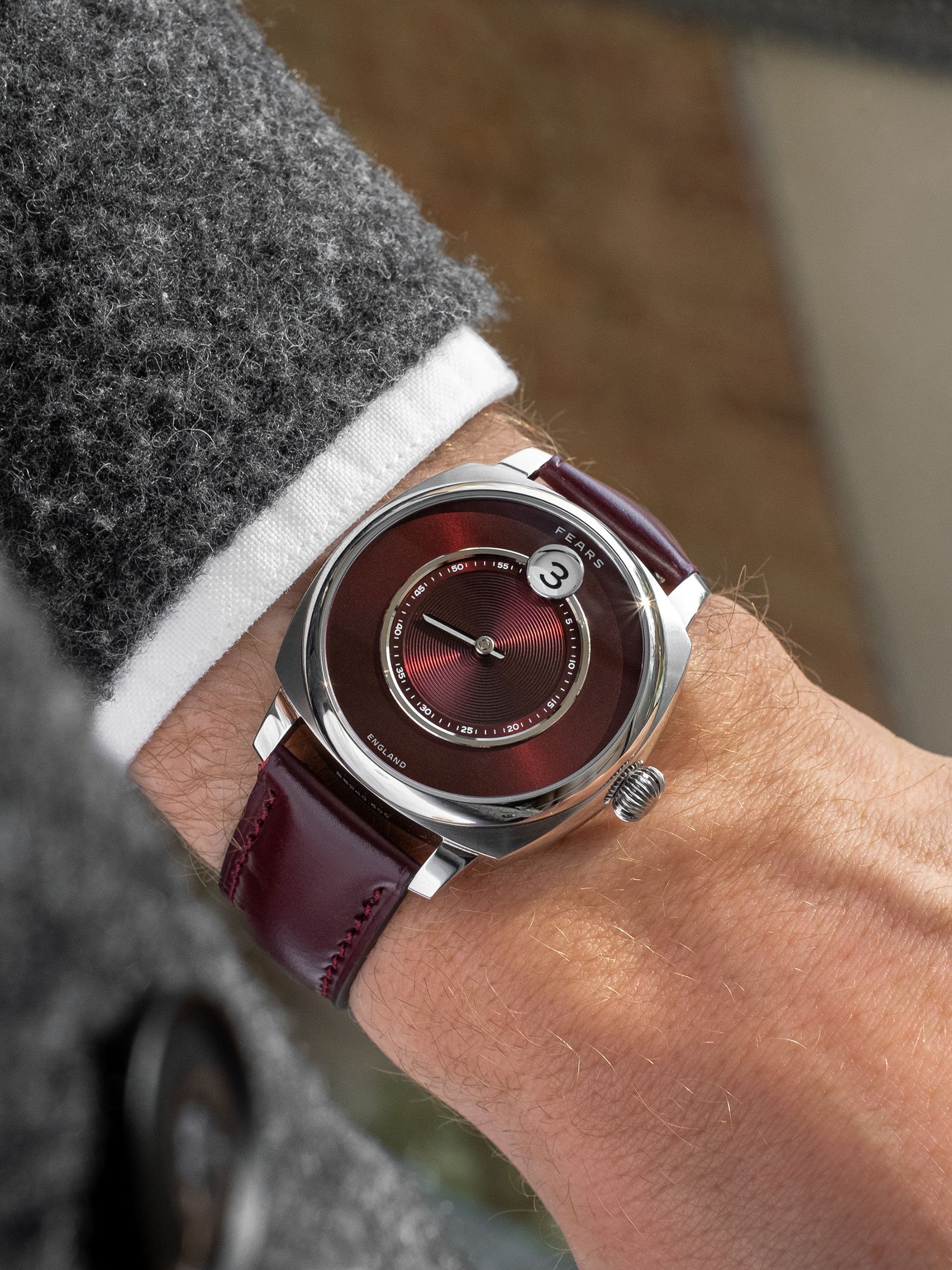 The Alliance of British Watch & Clock Makers comprises 78 brands as of January 20th, 2023. It may come as a surprise to many that this number of watch brands exists in Britain. I certainly struggle to name ten without referring to the complete list here. But it’s worth noting that the Alliance does not require a particular majority of the production on British shores. This is in contrast to the “Swiss Made” label, which necessitates that 60% of the value of a watch comes from within Switzerland. Policing the origin of each component of each watch of each brand would be almost impossible for the Alliance and would present a barrier of entry that goes against its purpose. That said, there are notable absences, including Bremont and anOrdain. The Alliance extends an open invitation to these brands, but both currently remain separate from the Alliance. 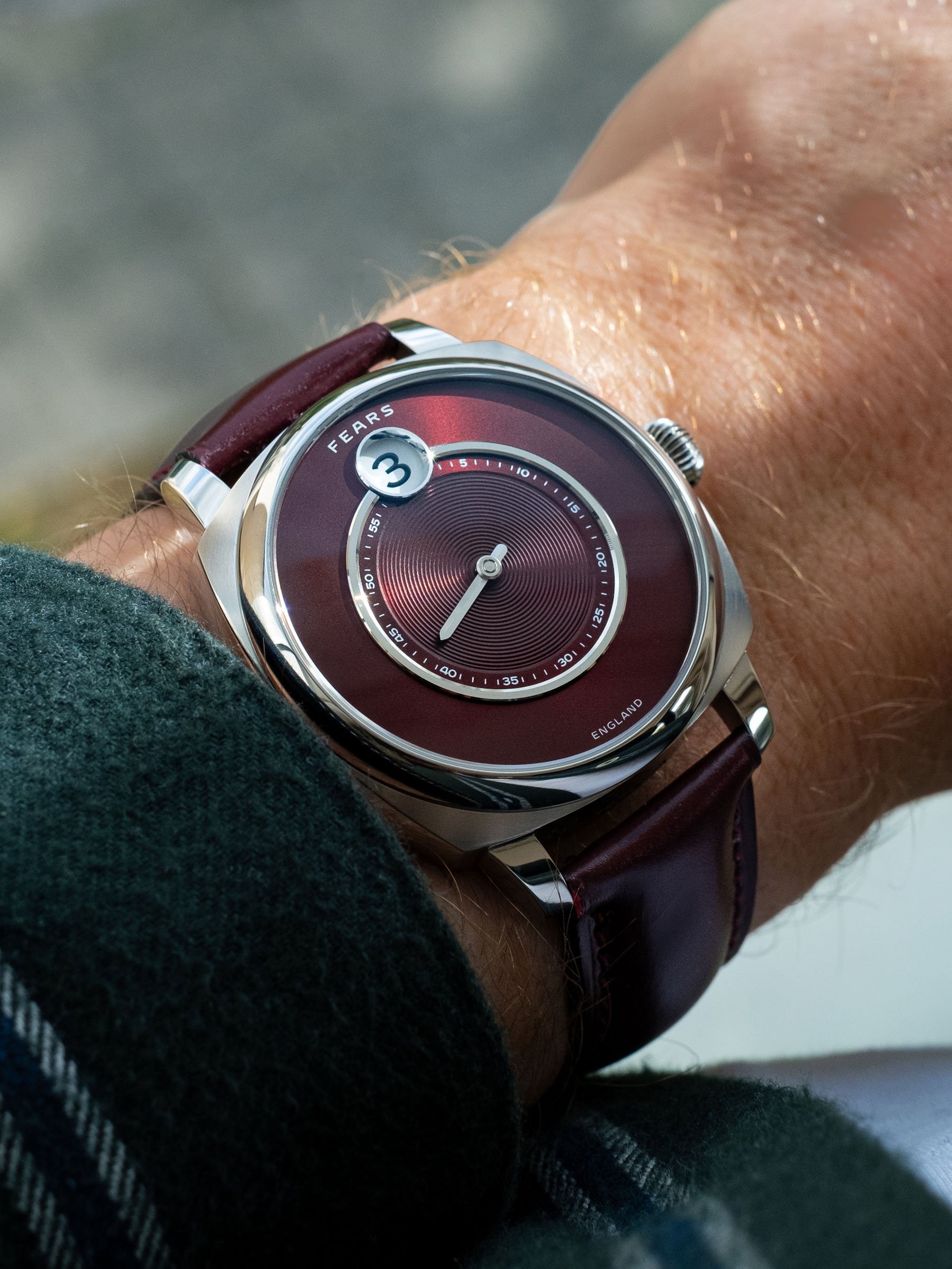 The combined forces of two important Alliance brands have produced the watch that we see today. Founding members Fears and Christopher Ward team up to form the Alliance 01 jumping hour watch. The case is the familiar Fears Brunswick cushion shape in a slightly larger 40.5mm diameter in 316L stainless steel. The case is also slightly thicker at 12.8mm to accommodate Christopher Ward’s bespoke JJ01 movement, which is based on the Sellita SW200-1. On paper, this would make a simple collaboration of watch cases by one brand and watch movements by the other. However, Christopher Ward also designed the dial with a rich burgundy hue. An outsized window with curvy Edwin numerals provides the hour, while a small hand indicates the minutes. At the passing of each hour, the window indication jumps instantaneously with a satisfying click. 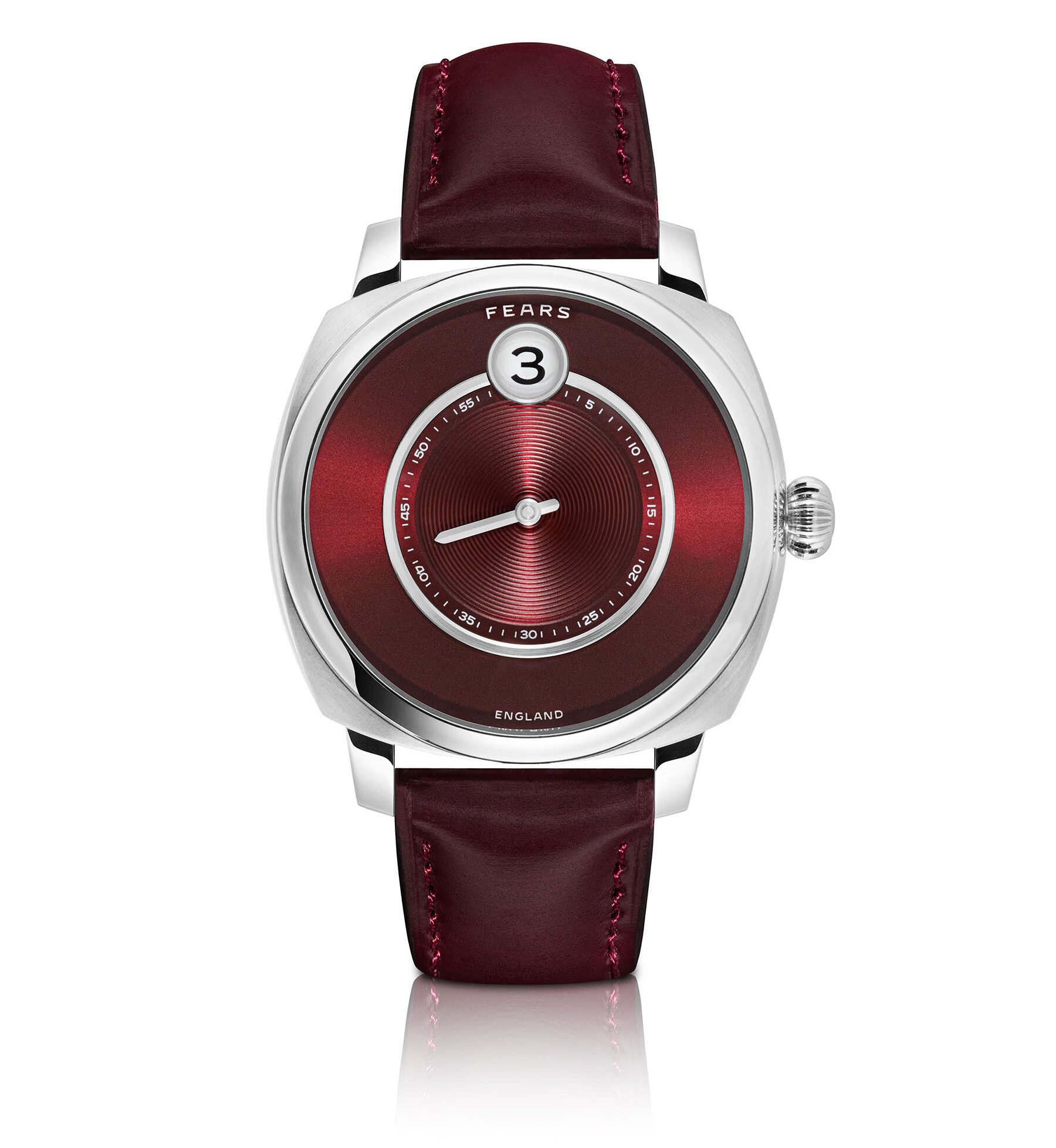 The layout of this display allows for more of the dial color and sunburst finishing to come through without sacrificing readability. While you may need to retrain your brain to read it at a glance, the large aperture for hours makes the time prominent. Running the circumference of the inner minute dial is a steel ring polished by hand and a thinner frame for the hour window. The numerals curve ever so slightly at the edges to fill the circular frame without wasting space. It’s a remarkable execution considering the Brunswick was not designed as a jump-hour watch. And for many, it could be a watch that showcases the curvaceous Brunswick case by completely altering the dial. I liken it to the Code 11:59 by Audemars Piguet, which received a frosty reception at its debut but gained a greater appreciation thanks to the Starwheel complication.

The case remains comfortable and stylish without exceeding its svelte profile. Flipping the watch over presents a solid steel case back with subtle brand logos and Alliance hallmarks engraved on the underside of the lugs to commemorate this historic collaboration. The matching Bristol leather strap maintains the deep oxblood red and comes with a steel pin buckle. All of this effort is to raise the Alliance’s profile. As a non-profit organization, the Alliance relies on donations and club subscriptions, which is why 100% of the proceeds for each watch will be donated to the Alliance. Unfortunately for some, this also means each of the 50 limited edition pieces is only available to Alliance club members. But there is still time to sign up for the Alliance with an annual subscription of £55 before the Fears Christopher Ward Alliance 01 watch goes on sale on January 27th for £3,950.