I’m usually not a fan of blacked-out watches. And — spoiler alert — my opinion hasn’t changed after spending some time with the all-new Brellum Pandial LE.3 DD DLC Chronometer. But I must say that the diamond-like-carbon coating gives the watch a more premium look and feel. Not that the watch wasn’t premium enough without the coating, but I often find that blacked-out versions of watches look a lot more like plastic remakes. That is certainly not the case here.

In the spring of this year, I also wrote the introduction for the white-and-blue version of the Brellum Pandial. I remember being quite impressed, first of all by its size — it’s quite a large watch at 43mm wide and almost 16mm thick — but also by the level of finishing, attention to detail, and the fact that, despite its size, it actually wore quite well. And all those statements are still true for the DLC-coated Pandial LE.3 that Brellum is introducing today. It even looks like that black coating slims the watch down by a few millimeters. Let’s go over the details. 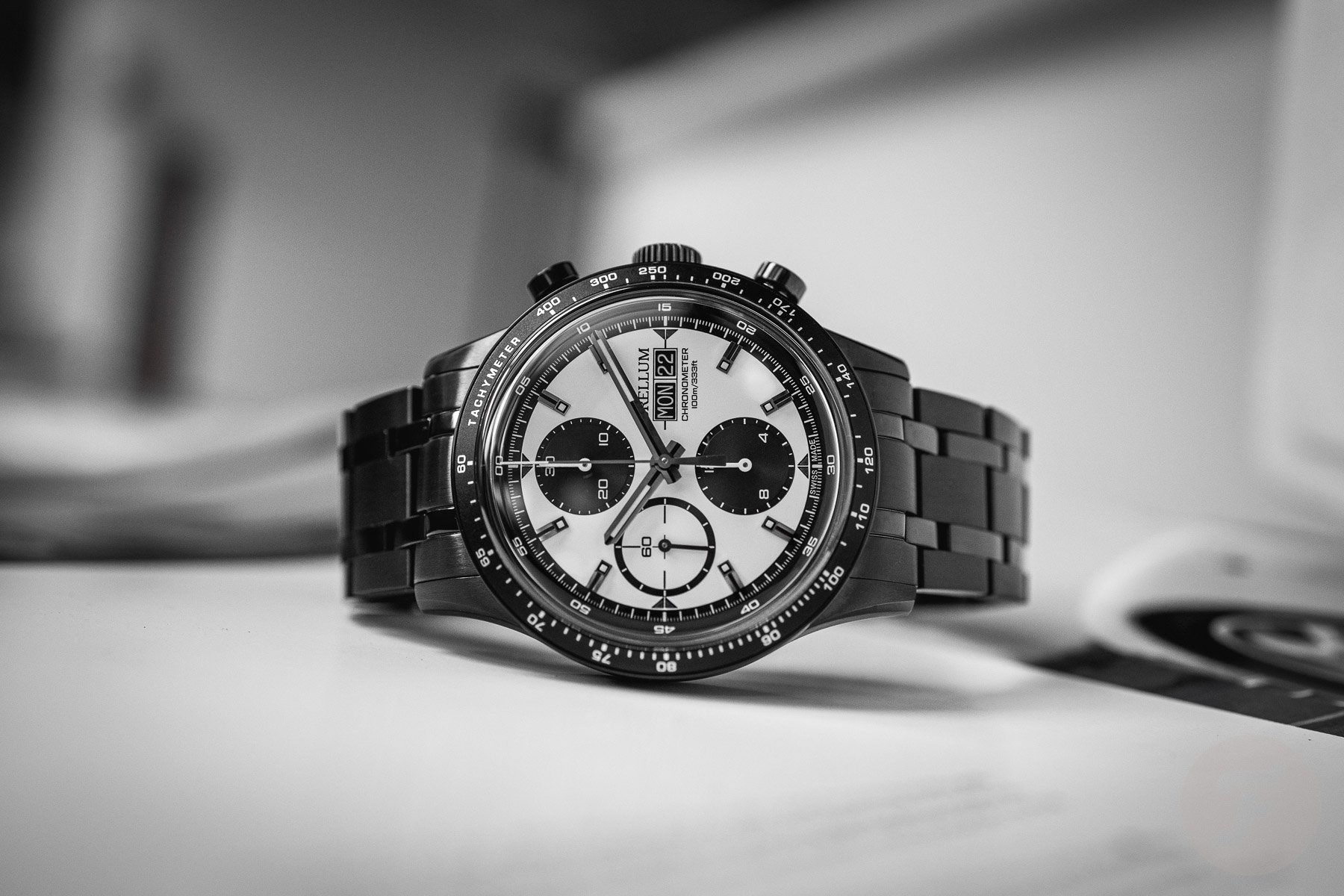 And now that I think about it, I also don’t really own any black clothes. I just don’t feel comfortable wearing black. I guess I just don’t like the look of it. Gray is fine, but black? No thanks. And that might also be why I’m not a fan of blacked-out watches. Again, I think it often makes a premium-looking watch look a lot cheaper than it actually is. But in the case of this Brellum Pandial LE.3 DD DLC, it actually works well and gives the watch a more refined appearance. I believe it’s because that coating has been applied with the same attention to detail that you notice throughout the whole watch. 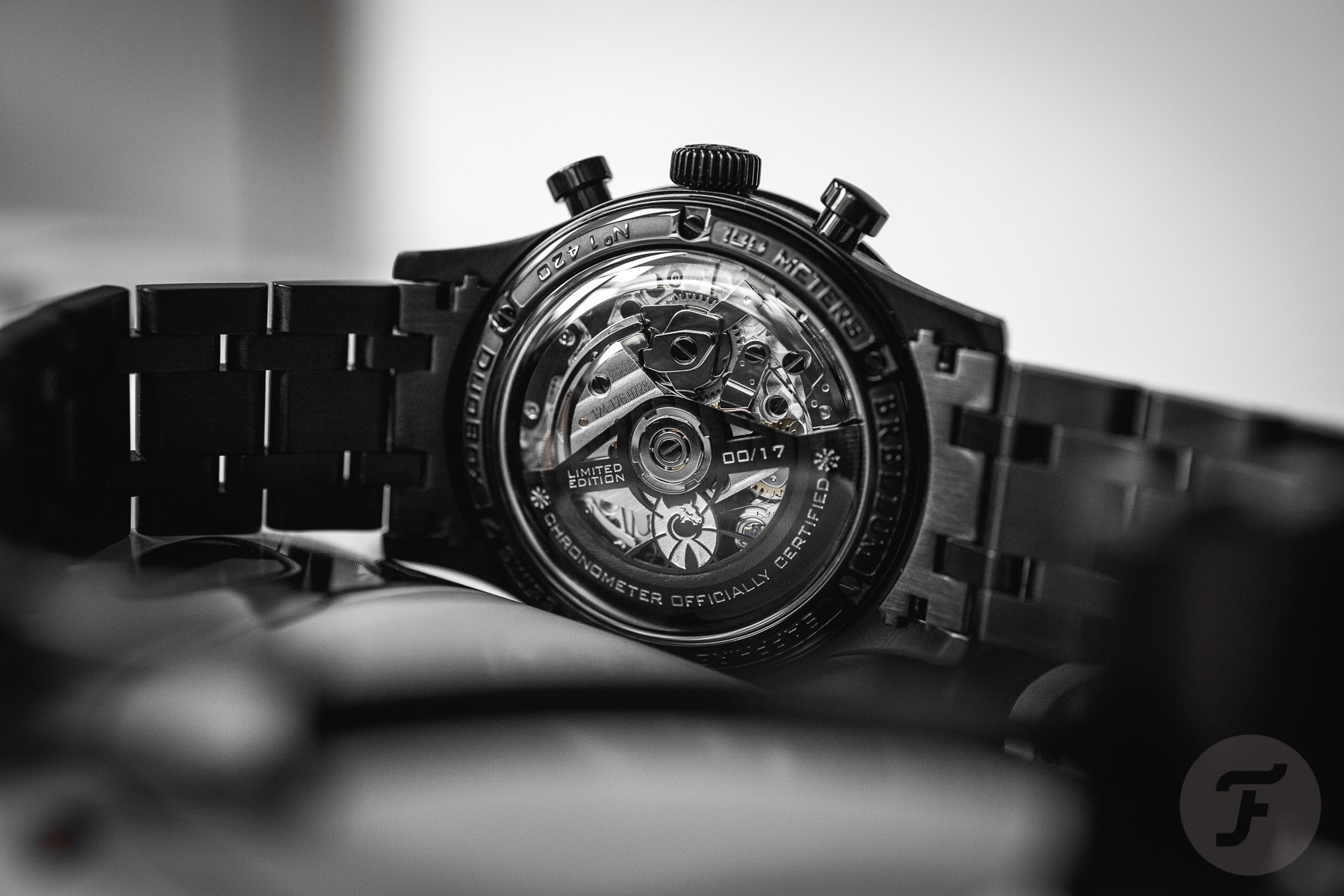 The same but different

Apart from the black coating, there’s not much news here. Like its predecessors, the Pandial LE.3 DD DLC is powered by the Valjoux 7750 automatic chronograph movement. And like all other Brellum watches, it has been adjusted to be accurate within COSC chronometer standards (+6/-4 seconds per day). Additionally, through the impressive domed, AR-coated-sapphire case back, you can still see the perlage decoration and Geneva stripes on it. The rotor, however, has been given a black coating this time, obviously to match the DLC theme. And it also reveals that only 17 pieces of this Pandial LE.3 DD DLC will be made. 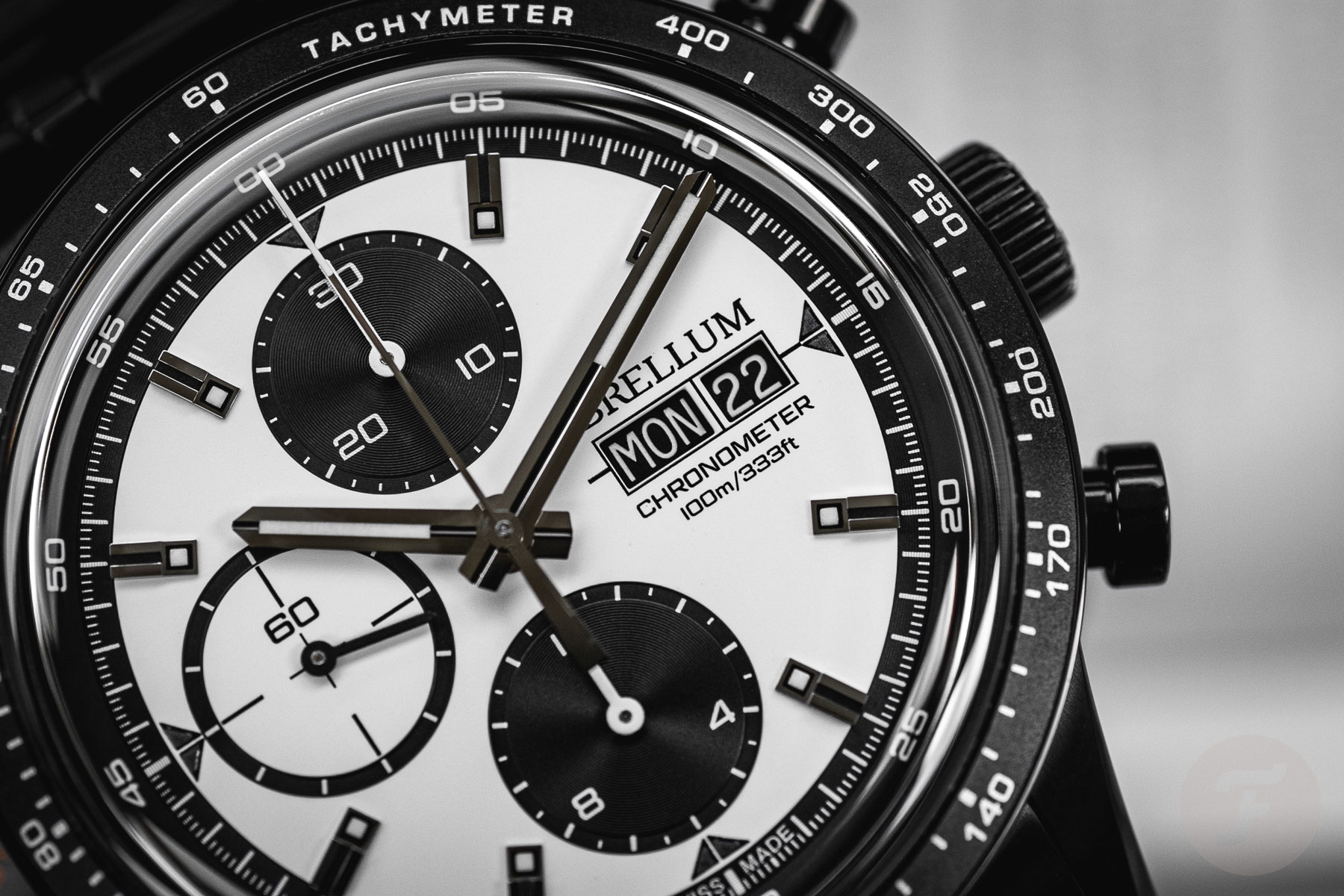 Turning the watch over again, there are also not too many surprises. The dial has the same clear layout as the earlier blue and black Pandial limited editions. It even looks almost exactly the same as on the black limited edition with a stainless steel case and bracelet. There’s just one tiny difference, at least as far as I can see — the day and date discs, which are now black instead of white. And because of the all-black case, the snow-white dial pops even more than on the steel models. Maybe that’s also what gives the watch that more sophisticated look, almost as if it’s wearing a velvet smoking suit.

When you hold the Pandial LE.3 DD DLC in your hand, you immediately notice its weight. Sized for an 18.5cm (7.3″) wrist, it weighs exactly 180 grams. That’s certainly not light, but it also makes the watch feel incredibly sturdy and gives you a sense of quality. But the quality is evident in more than just its weight. When you wind the crown, pull it out, and push it in again, it all feels exactly as it should. It is smooth when you expect it to be and punchy when it needs to be, just like when you operate the chronograph pushers. The feeling of quality carries through to the finishing on the bracelet, the case, the movement, and the dial. It’s not like the design is all that ground-breaking, but everything looks sharp and perfectly aligned.

Is there nothing I’d change, then? Well, the end links do have a female construction, so they should, in theory, allow for good articulation. In reality, though, they still flare out a bit to match the contour of the lugs, which already have a 52mm span. So I would say you need a wrist of at least 18cm (7″) to pull this watch off. There’s also no micro-adjustment option on the bracelet apart from the half-links it comes with. But other than those small things, I think you get a lot of watch for your CHF 2,990. And you don’t have to worry when you take it out for an adventure because the DLC coating makes the watch extremely scratch resistant. Finally, this Pandial is still water resistant to 100 meters, which is a nice bonus.

What do you think of the blacked-out Pandial? Are you a fan of black watches in general? Let me know in the comments below.