We were invited to join Omega this evening on a special event. The exact reason for the press event was not very clear upfront, but seeing the new Omega Seamaster PloProf 1200M with Master Chronometer written on the dial already made us a bit suspicious. Remember our thorough description of the new METAS certification, introduced by Omega last December?

Omega told us that the new watches will have Officially Certified on the dial, as it would mean that the watch meets all the (high) requirements, as tested and approved by METAS. Apparently this will change a bit, as the new wording on the dial is Master Chronometer. 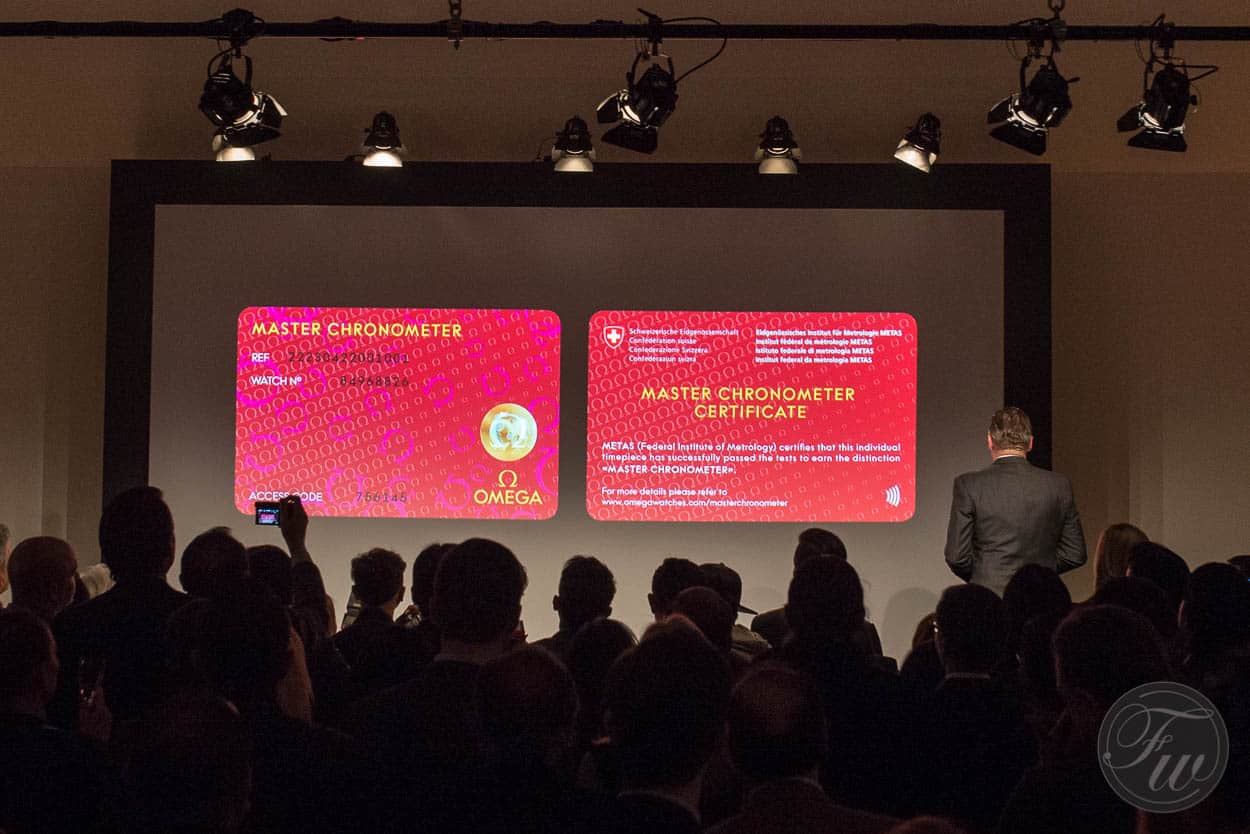 All Master Chronometer watches will come with this credit card ‘certificate’ than will allow you to logon to the Omega website and retrieve all specifications and test results for your particular timepiece.

This evening, Omega introduced to the Globemaster. A name from the past and one that has a close relationship to the Constellation of the early days. We will get back to that on another day, as it will get into details a bit too much for now. 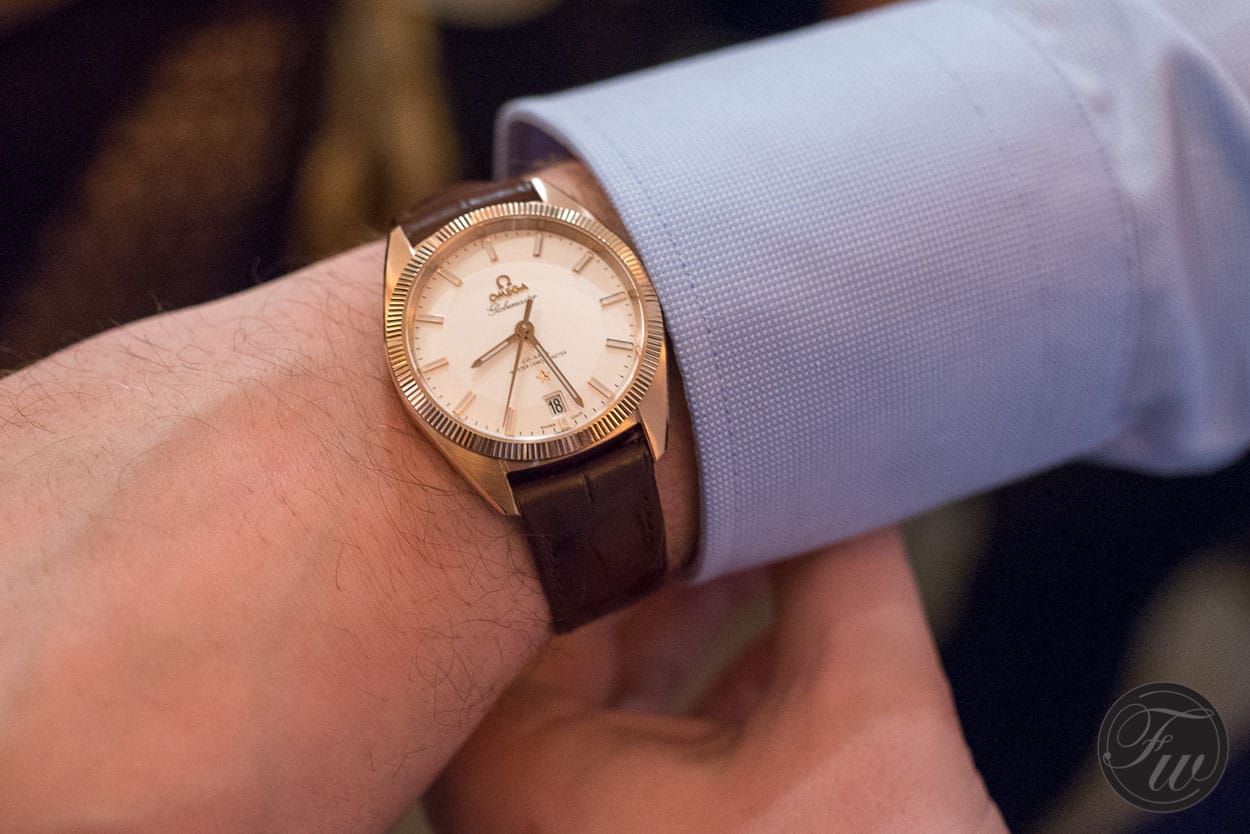 The Omega Globemaster is the first Omega that meets the Master Chronometer standard, which consists of 8 important aspects (and the constellation on the back will show 8 stars, for this reason). These 8 important criteria that are being measured are:

The Omega Globemaster is a 39mm timepiece with a striking appearance, resembling the features of those early Omega Constellations due to the pie-pan. Either a blue dial or a silver opaline pie-pan dial is fitted to these watches. The blue dial is only available for the stainless steel and bi-color models while the silver opaline dial can also be found in the 18 carat gold (including an 18 carat Sedna gold version) models, bi-color and stainless steel versions. 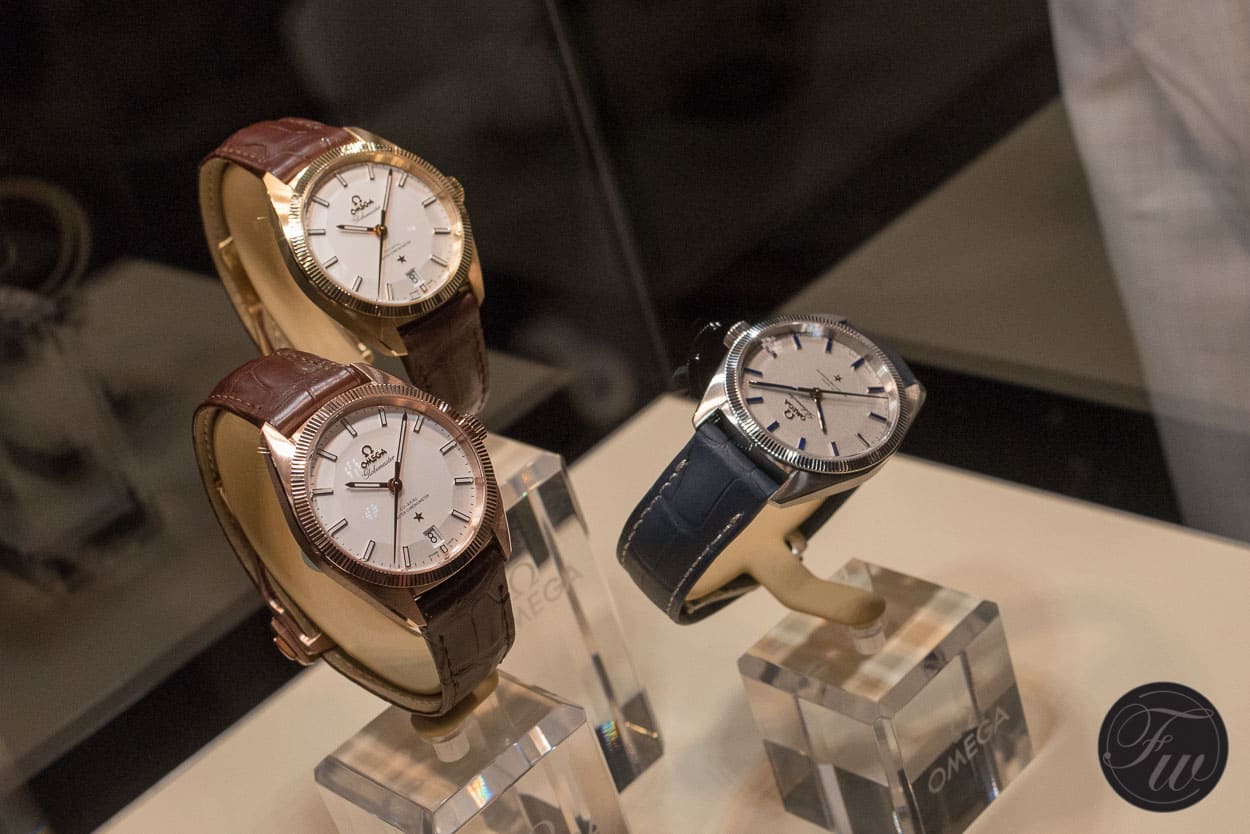 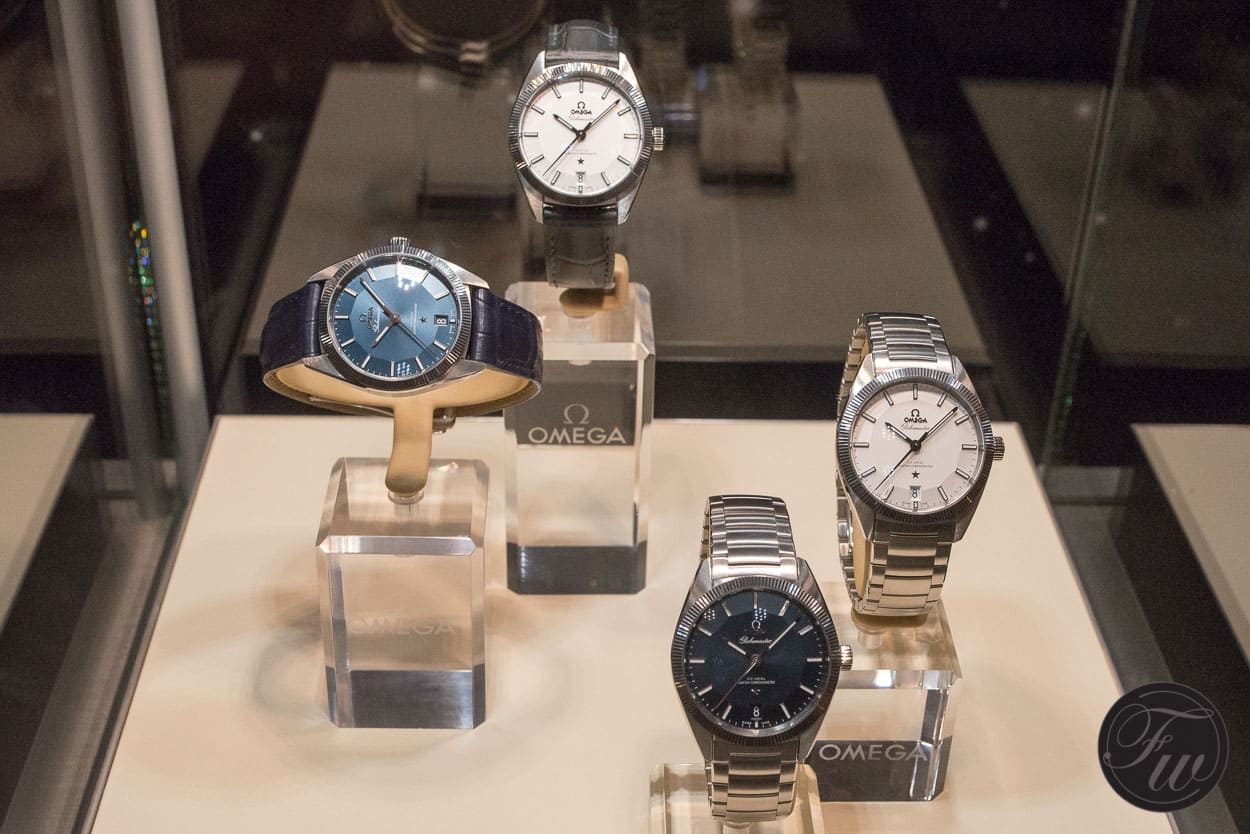 Omega Globemaster watches come with a beatiful fluted bezel (on the stainless steel versions it is made of tungsten carbide), which might make you think of the bezel of a Day-Date or Datejust from that other company. However, Omega has been using fluted bezels for various models in the past, including the Constellation C-case of the 1960s and even much older watches (old chronometer wrist watches).

The movement of the Omega Globemaster is the newly introduced Omega Co-Axial caliber 8900 (or 8901 for the gold models). All models are fitted with a sapphire case back, in the middle the famous constellation medallion with 8 stars on there. 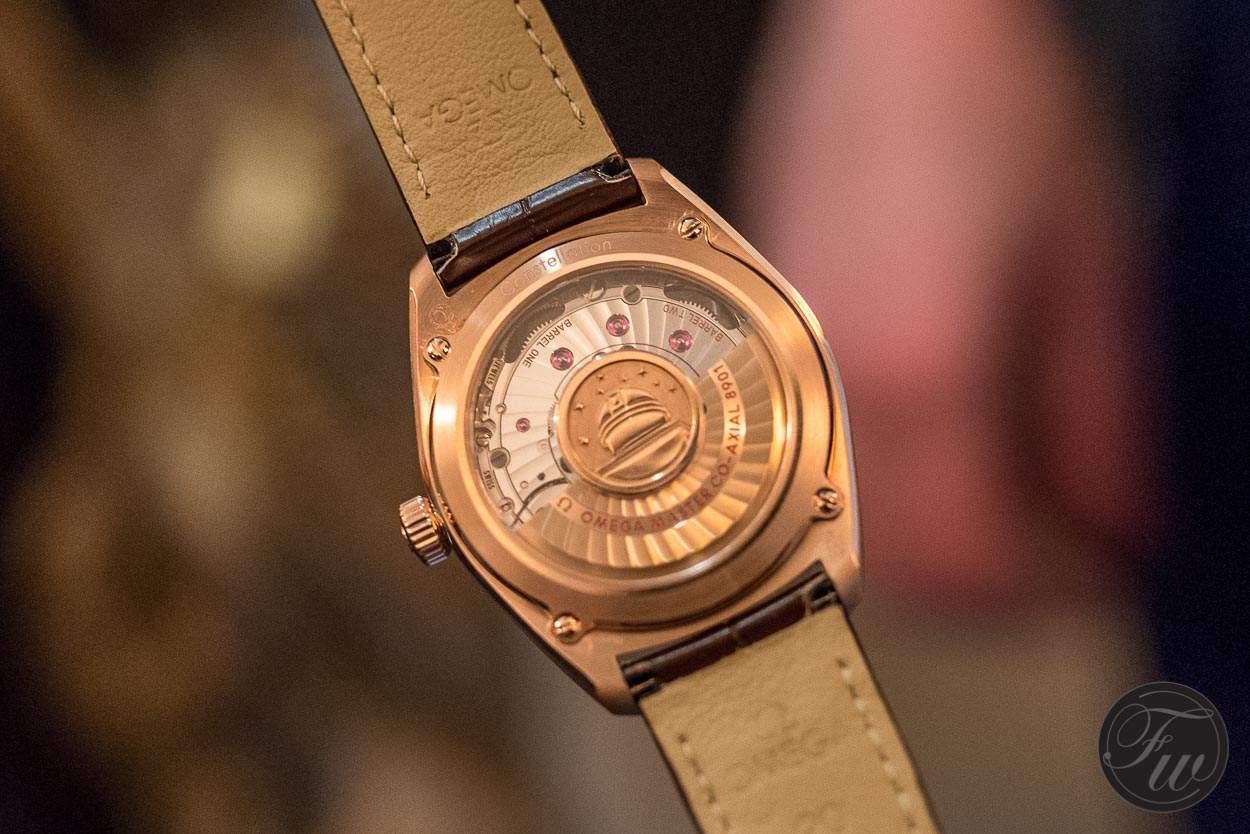 Omega CEO Urquhart and Head of Development Monachon presented the new Master Chronometer movement and of course the Omega Globemaster timepiece with much pride, for a large audience (people waited patiently in long queues in order to get in, to see what Omega would be revealing).

The evening was very lively, great music, drinks and snacks and an audience that was more than interested to learn more about the Globemaster and the new Co-Axial movement. Omega created small test labs in a special area, where you could witness the influence of 15.000 gauss (or test how much gauss your own bag or equipment exposes) in several different settings. The Omega Museum Director was there to answer questions about the historical pieces (mainly Constellations) that were shown there, so you could compare the new Omega Globemaster yourself with the historic models. Omega watch makers were present as well, to explain the new Globemaster to the guests. 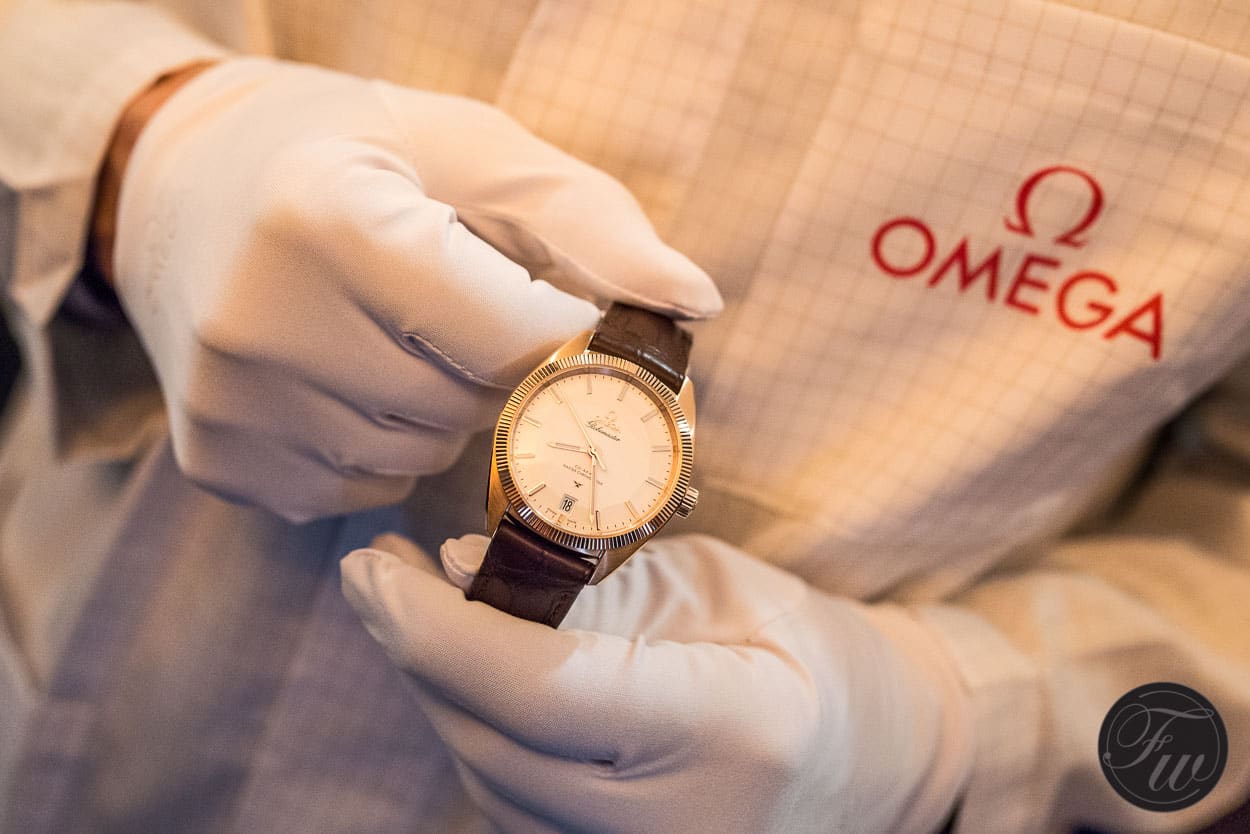 My personal view is that the Omega Globemaster is a perfect alternative for those who always longed for the revival of the original Omega Constellation pie-pan, without losing authenticity and with all the benefits of a new modern timepiece with ditto state-of-the-art movement. I really love the Constellation models, have a few of them myself from those very first models to the more current Manhattan model but always hoped for a cool successor of the pie-pan. The 1999 De Ville Co-Axial was a close call, but compared to the Omega Globemaster it was just a first attempt.

Update: Our Omega Globemaster 2015 article can be found here.

More photos below in the galley. Click for higher resolution images.