The perfect "don't worry 'bout a thing, 'cause every little thing is gonna be all right" watch
Daan de Groot
comments 25
Share

Last week, Omega celebrated James Bond’s 60th anniversary. The brand introduced a Seamaster Diver 300M in blue with the iconic wave dial from the ’90s and a moiré animation on the case back. Through its social media accounts, Omega hinted at that watch prior to its launch. To everyone’s surprise, however, Omega also introduced a Seamaster Diver 300M in Canopus Gold with a gray silicon dial and green and yellow diamonds on the bezel. It is a design that clearly links back to the late Ian Fleming’s house on the northern shore of Jamaica.

During World War II, Fleming was working as a naval intelligence officer for the British Royal Navy. In 1942, he visited Jamaica in that role to investigate Nazi U-boats in the Caribbean. The mission he was a part of was called GoldenEye. After the war was over, he knew he had to go back to Jamaica, which, at that time, was still a British colony. He did, bought 15 acres of land close to Oracabessa Bay, and built a property there. He called it GoldenEye, and that’s where he started writing his James Bond books. Fleming wrote 14 in total, three of which partly take place on the island — Dr. No, Live and Let Die, and The Man with the Golden Gun. This explains why Omega chose to make a watch with such a strong link to the island in the Caribbean. Now, let’s take a look at the watch.

The GoldenEye estate in Jamaica — Image from Theflemingvilla.com

A silicon dial made out of white sand

When I think of Jamaica, I think of white beaches, crystal-clear seawater, palm trees, and the national flag in green, black, and yellow (or gold). Oh, and Bob Marley, of course. It was a bit much to incorporate all that into the watch, but there are certainly a few cool references within the Canopus Gold Seamaster’s design. The dial is made out of natural gray silicon. Silicon is produced using silica sand, also known as white sand. It’s heated to around 1,700°C and then made to react with carbon to create impure silicon. In the end, the silicon slowly recrystallizes, and that’s exactly what you see on the gray dial of this Seamaster Diver 300M. 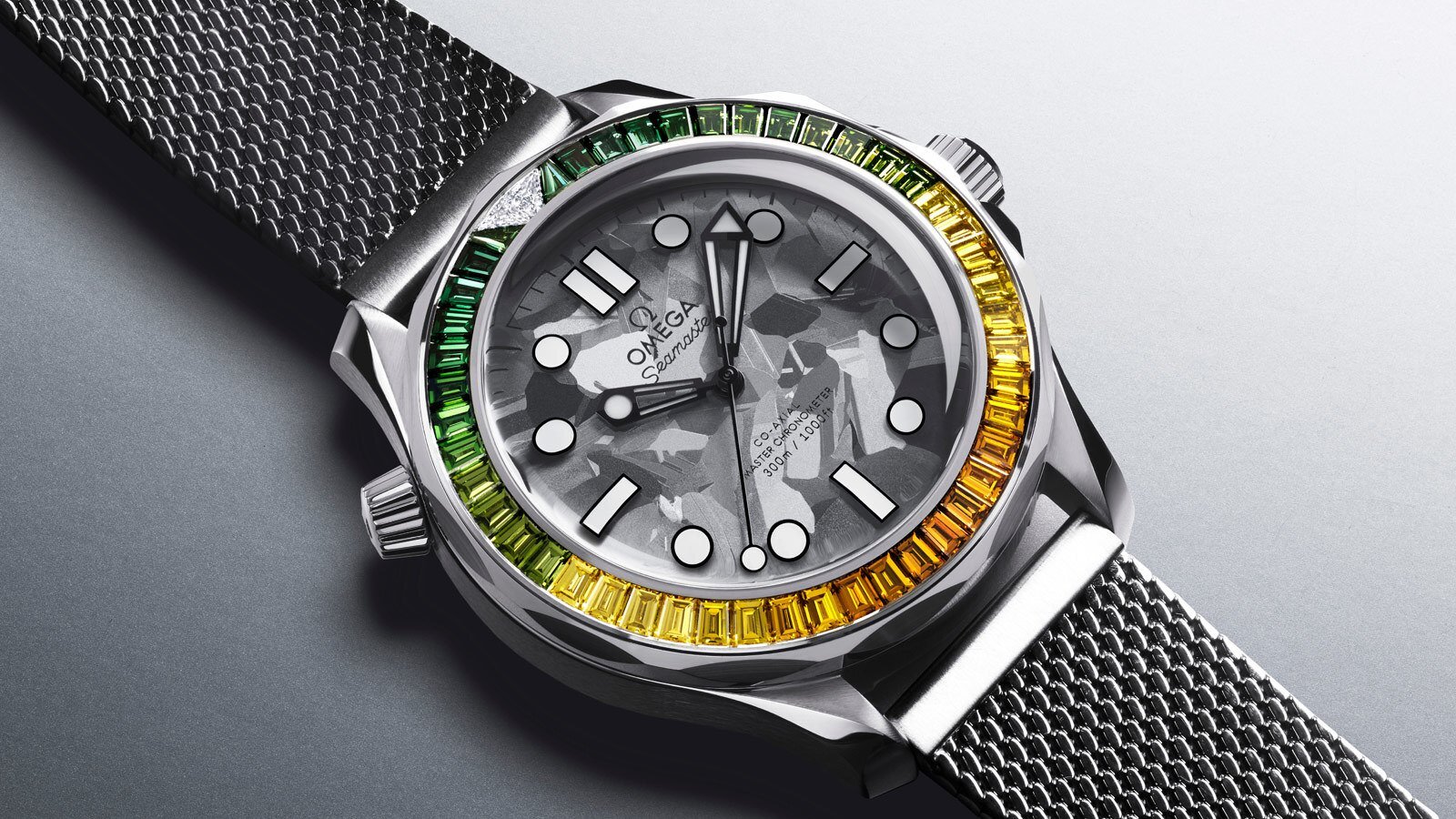 On each of these Canopus Gold Seamasters, the silicon dial structure is unique. It almost looks like a shattered mirror. Each and every splinter reflects the light in its own way. I saw it in person, and it’s really something to behold. The black-and-white markers and hands are a bit toned down, ensuring that all attention is drawn toward that silicon masterpiece. But there might be something else grabbing your attention, and that’s the green-and-yellow bezel. 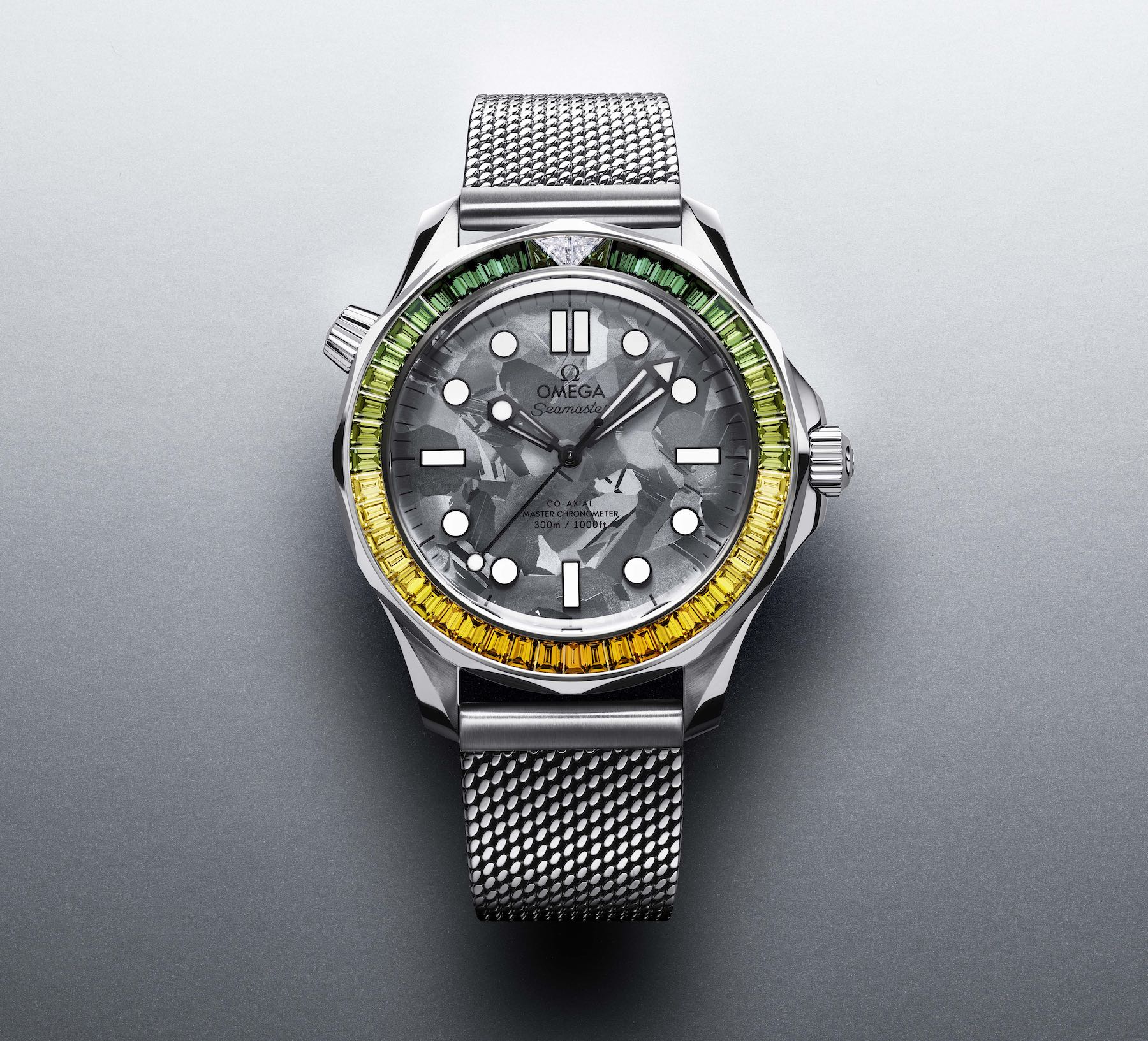 The colors of Jamaica

The combination of green and yellow is inextricably linked to Jamaica. That’s why the designers at Omega must’ve thought, “Why not use those two colors for the ‘diving’ bezel?” And instead of going for a ceramic or aluminum bezel insert, they went with green and yellow diamonds. The gemstones range from forest green all the way to cognac yellow and everything in between. Furthermore, two white diamonds represent the triangle that traditionally sits at the 60-minute mark. That triangle is missing from the blue-dial steel model. But here, it nicely facilitates the transition from the gray dial to the bezel.

Of course, this is a bold and colorful bezel. That said, the colors don’t scream at you. In real life, I felt that the dial claimed more of a leading role than the bezel. They’re both very brilliant, literally speaking, but there’s something about the dial’s irregular pattern that automatically grabs your attention. You don’t see green and yellow on watches all that often, especially not together. But here, I think the bezel pairs very well with the dial. Is it a bit over the top? Of course, but what do you expect from a watch that’s made entirely out of 18K white Canopus Gold? 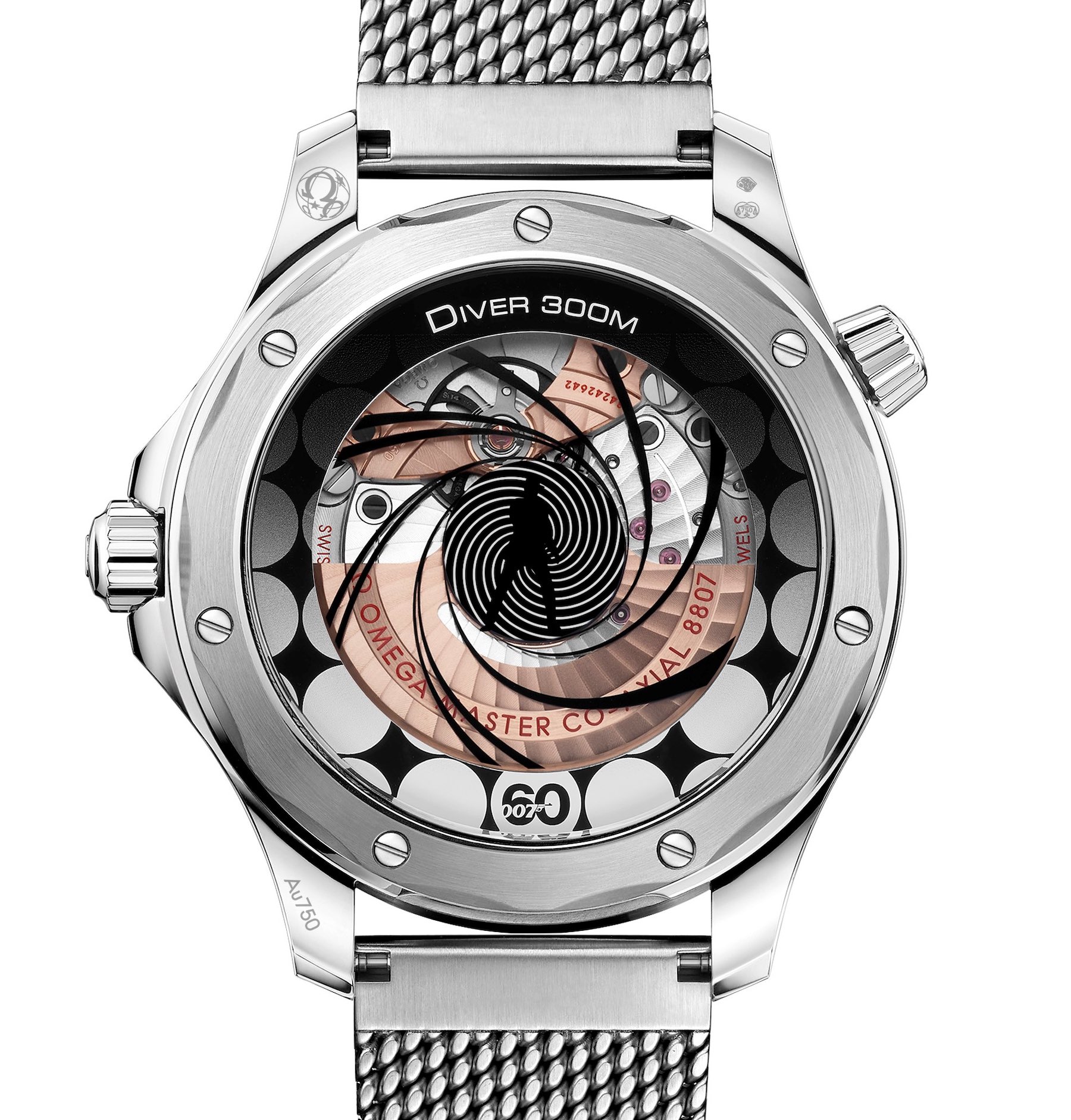 Canopus Gold is Omega’s proprietary white gold alloy, which includes platinum, rhodium, and palladium for color and stability. It is named after the bright star Canopus, which is 71 times bigger and 10,000 times brighter than our sun. The case of this Seamaster Diver 300M isn’t that bright, of course, but it is very bright. It’s also quite heavy. Together with its 18K gold mesh bracelet, the watch weighs somewhere around 250 grams. That’s about twice the weight that I’m used to. But at least it ensures that you’ll notice the watch on your wrist if its design didn’t already do so.

Visible through the case back is Omega’s 8807 automatic movement. That’s the luxurious version of the caliber 8806 with a rotor and balance bridge made of Sedna Gold. But that is not what the case back is about. Just like on the blue James Bond 60th Anniversary edition in steel, this Canopus Gold Seamaster also features the moiré animation. The Bond silhouette shoots at you every four seconds. Its size is actually determined by the weight that the movement could handle, as Omega didn’t want the animation to have any detrimental effect on the movement’s chronometer accuracy and 55-hour power reserve. That’s also the reason why the lollipop seconds hand is made out of aluminum instead of steel, reducing its weight.

“Underneath the Mango Tree”

Apart from the dial and the bezel, the box that the Canopus Gold Seamaster Diver 300M comes in is also a clear nod to Jamaica. It is especially a reference to the song “Underneath the Mango Tree”, which was used in the first Bond movie, Dr. No. The box is made entirely of mango wood, and the inlays are done in mother of pearl to resemble the shells on Jamaican beaches. Again, it is completely over the top, but also completely appropriate for a watch that costs CHF 135,000 (excluding VAT).

Omega’s partnership with the James Bond franchise began in 1995 with the movie GoldenEye. Therefore, I think it is very fitting to launch a watch that links back to Ian Fleming’s GoldenEye estate in Jamaica. And what a watch with which to celebrate 60 years of Bond! Yes, it’s extravagant, but if I had the money to buy it, I wouldn’t even mind wearing this one, especially on one of those Jamaican beaches with white sand and crystal-clear water while listening to Bob Marley’s “Three Little Birds“. For more info on the Omega Seamaster Diver 300M James Bond 60th Anniversary in Canopus Gold, please visit the Omega website.