With just over three weeks remaining in the year, Nivada Grenchen and Worn & Wound have announced a trio of watches to close out 2022. The first is a great version of Nivada’s Chronomaster that comes with the legendary Valjoux 72 movement. This one will make the true chronograph enthusiasts’ hearts beat faster. The other two watches are a pair of Datomaster VK64 models powered by Seiko meca-quartz chronograph movements. All three watches have plenty of style and pizzazz to end this year with a bang.

Ask a chronograph lover to name his top three chronograph movements ever, and there is a pretty big chance that one of them will be the Valjoux 72. This legendary caliber was produced from 1938 until 1974. During that time, it was used by a multitude of different brands for some of the most iconic chronographs ever made. Just think of the Rolex Daytona, Breitling Navitimer, and the Heuer Carrera. Another one of them was the Nivada Chronoking. Now the movement returns in the special Chronomaster Valjoux 72, a 20-piece limited edition designed in collaboration with Worn & Wound. Additionally, there will be two new Datomaster VK64 models. There’s plenty to talk about here. 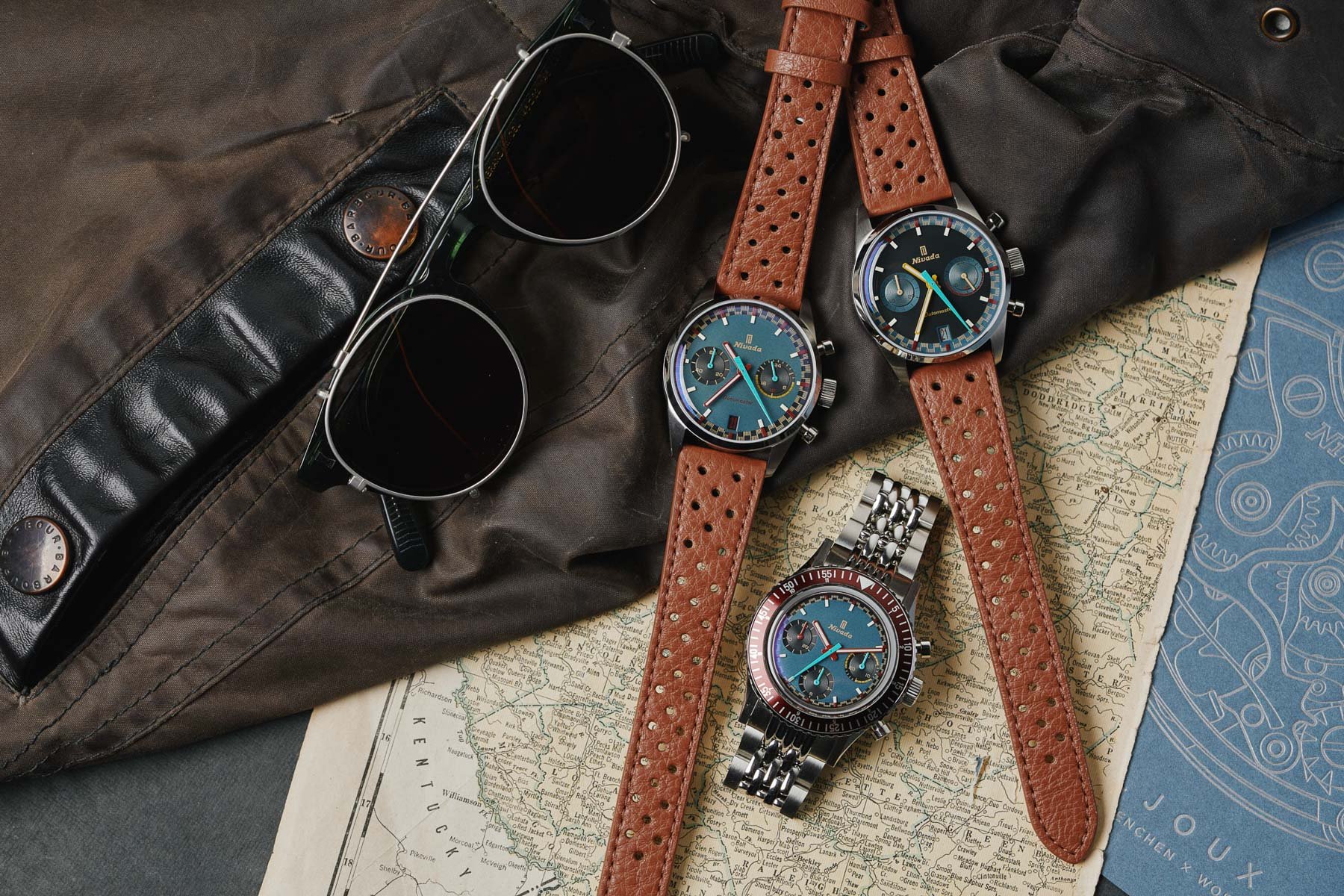 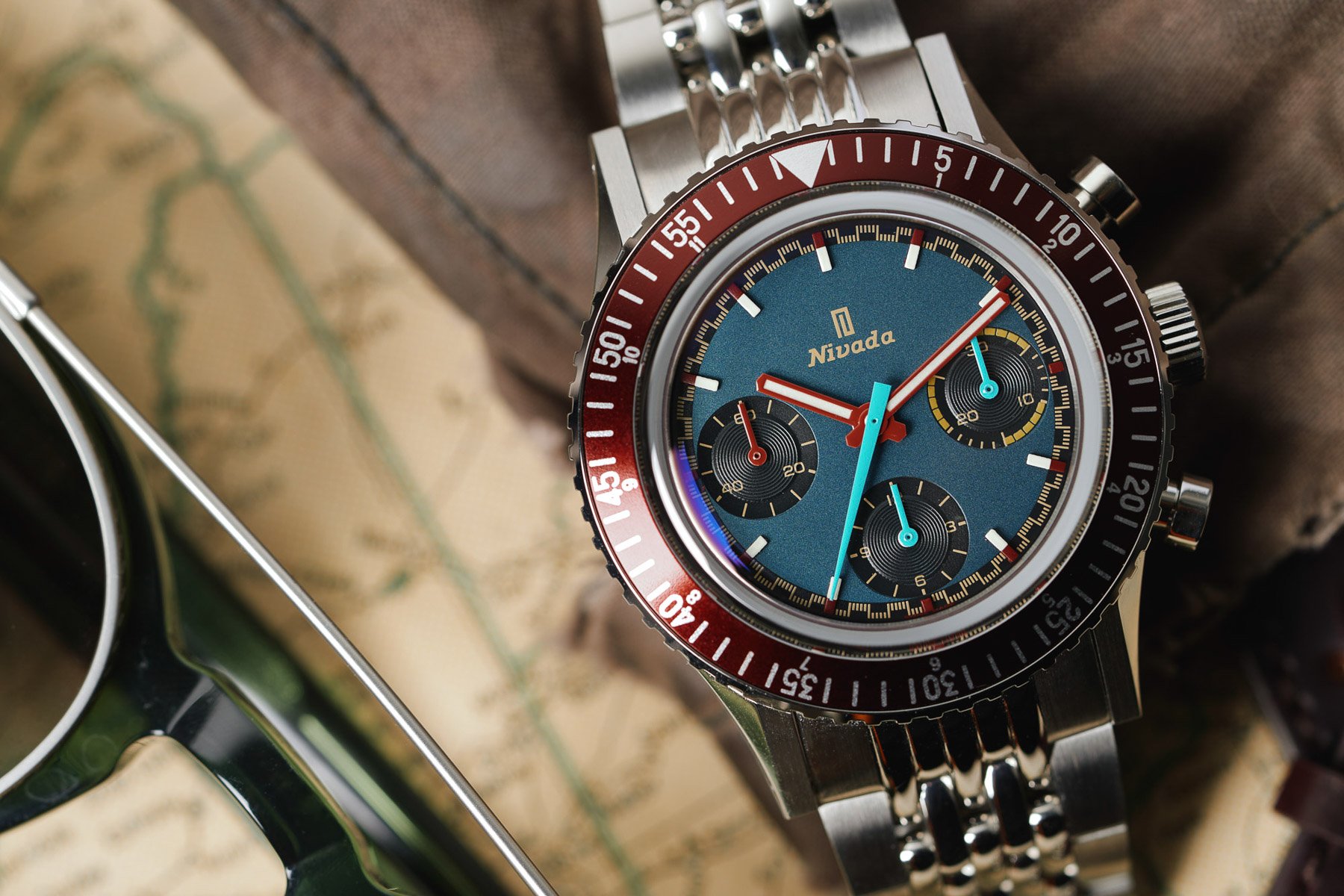 The Chronomaster comes with a 38mm case with a 39mm bezel. The case is 14mm thick, 46.5mm from lug to lug, and water-resistant to 100 meters. It’s the familiar Chronomaster aesthetic that we have come to know and love over the past couple of years. But this Worn & Wound limited edition comes in a very nice color combination that makes it stand out immediately. The watch features a black-cherry-colored aluminum bezel insert combined with a fog-gray dial and a racing-style chrono-seconds index printed in khaki on a black outer ring. In the provided photographs, the dial, rather than gray, looks a very nice shade of blue with great depth. 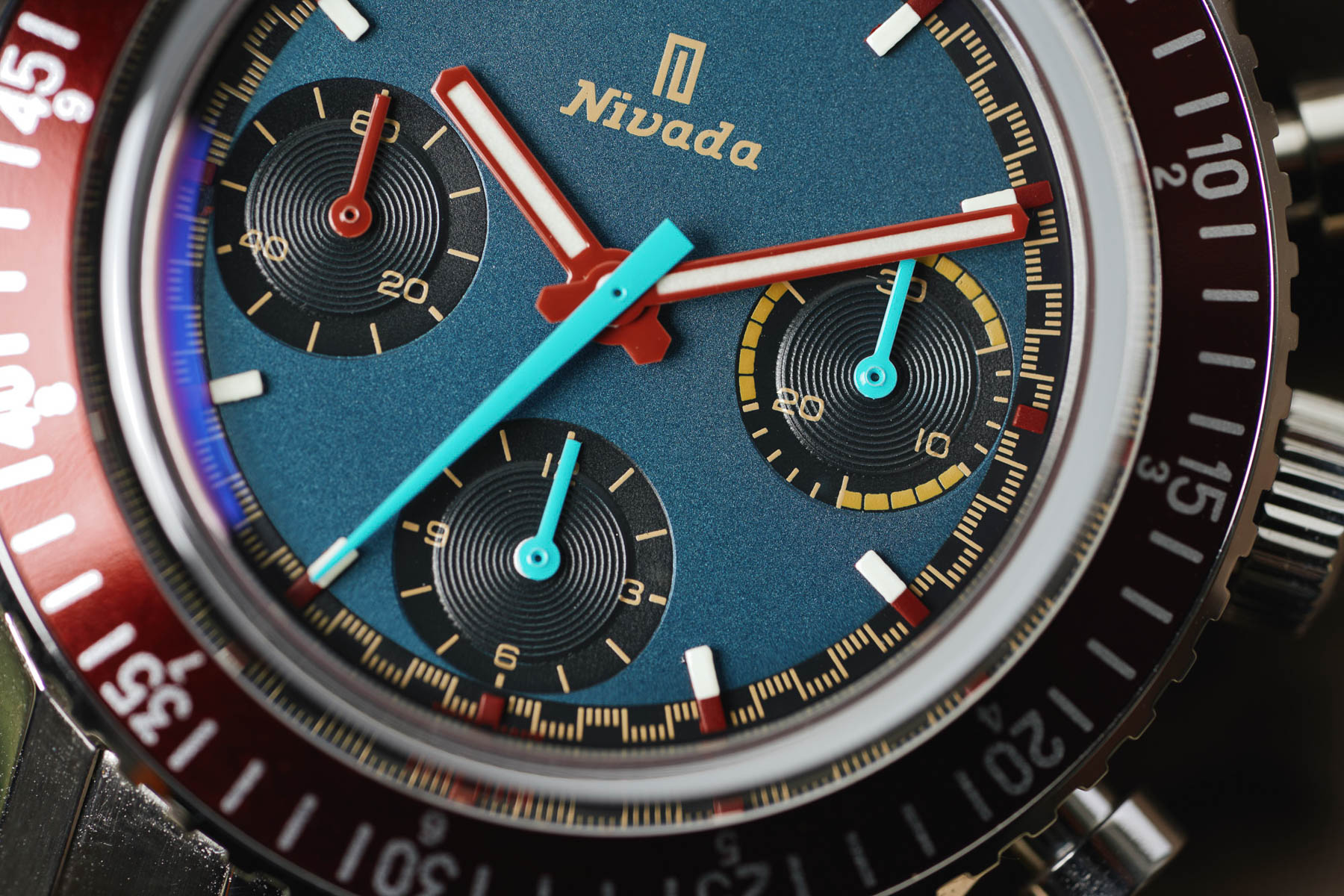 The three sub-dials are black with khaki indexes and three yellow five-minute highlights on the minute counter. The applied luminous hour markers are a nice combination of white and red, and the hands finish the overall aesthetic nicely with a dark cherry color for the hours and minutes and a bright cyan shade for the chronograph seconds. This choice of colors is bold and eye-catching, but it looks like nothing we have seen before from Nivada Grenchen. I was immediately impressed by the looks of this special limited-edition Chronomaster. The style and colors make for a beautiful mix of futuristic and vintage vibes that mesh very well. 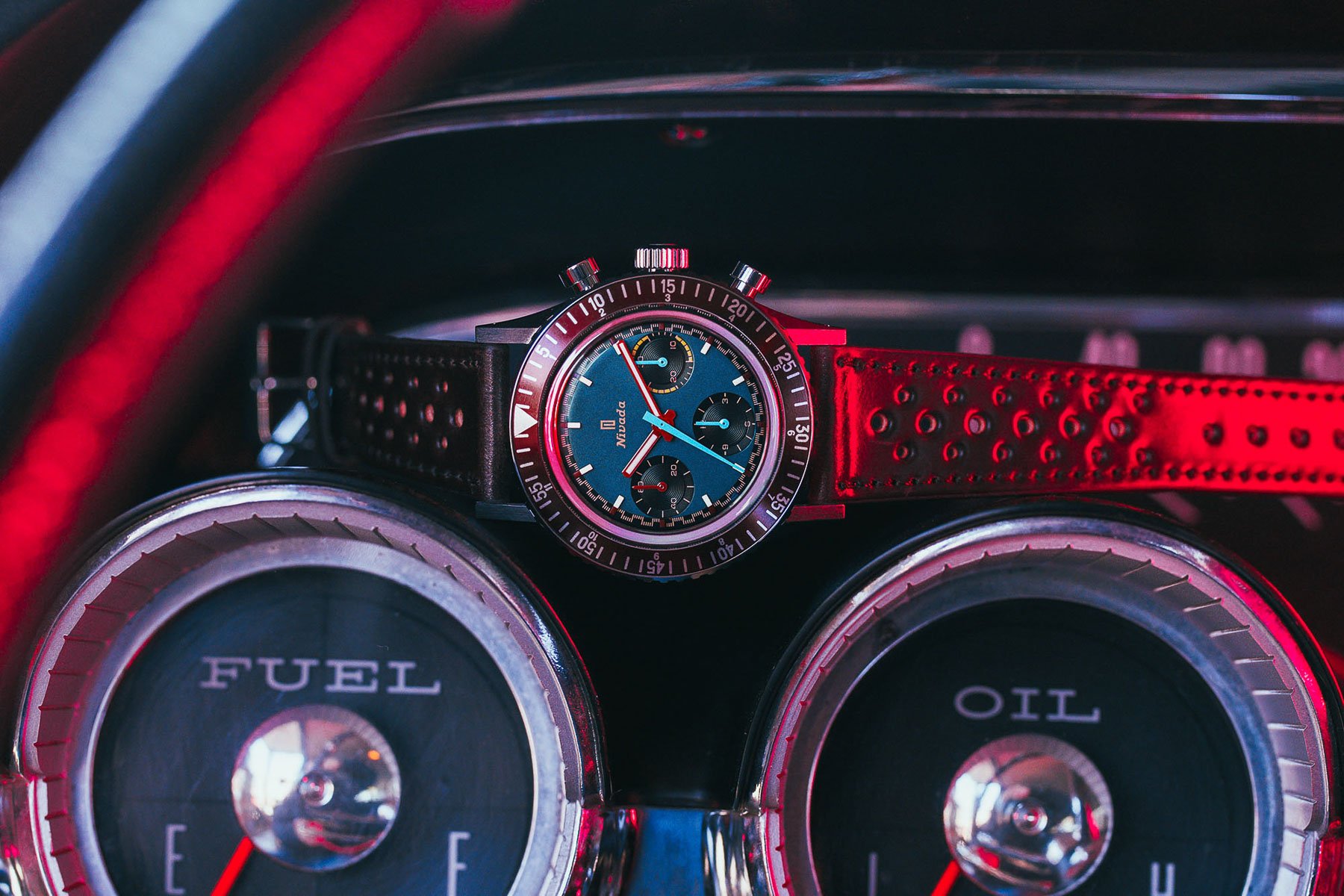 Further enhancing those looks is the beads-of-rice bracelet that the watch comes on. We know this bracelet from other Chronomaster releases. It matches the overall style and is very comfortable to wear. If you are not a fan of the bracelet, the watch will also come with a brown rally-style strap in Shell Cordovan that takes the vintage vibes up another notch. I have to say that both options add plenty of charming good looks to the piece. 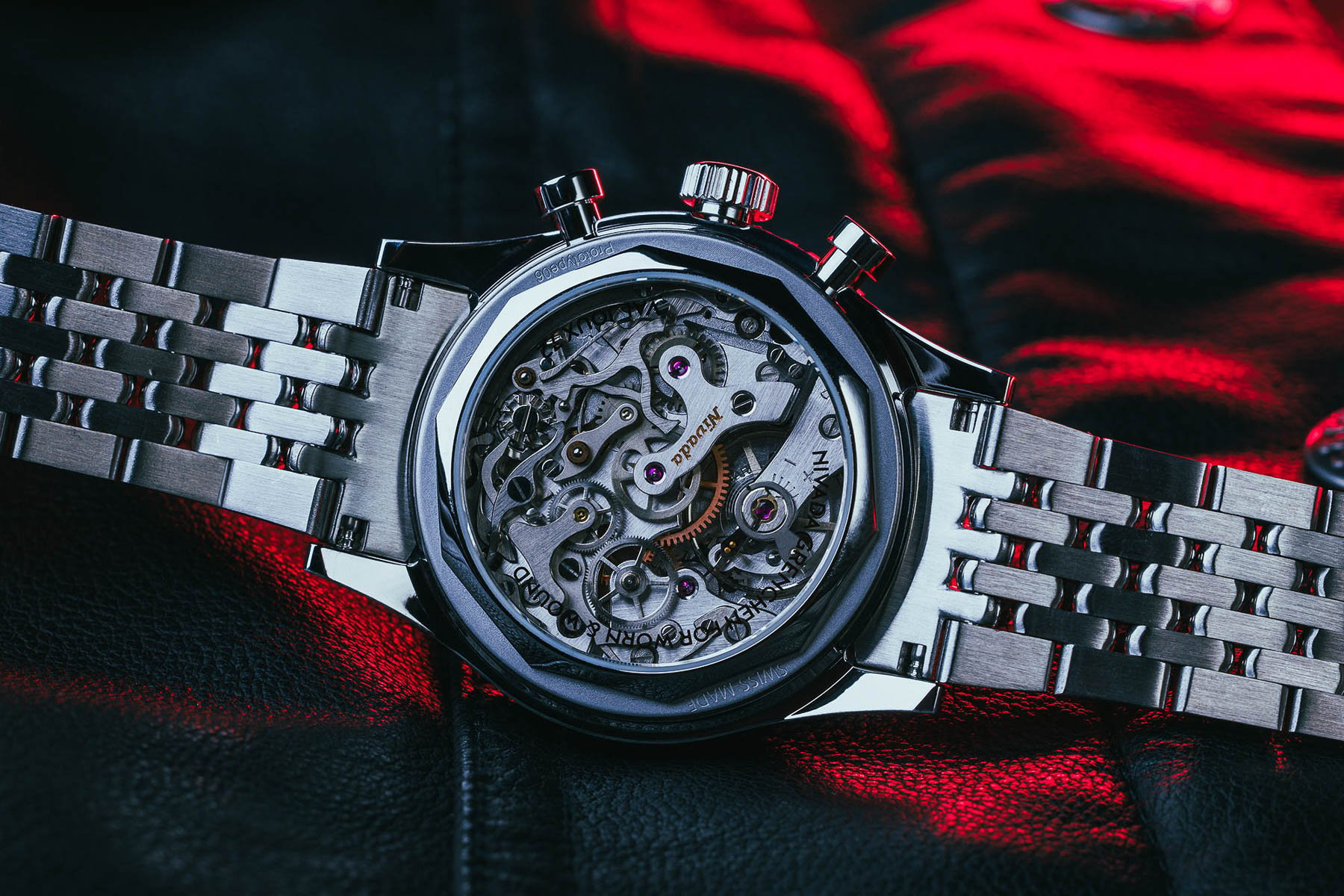 If you turn the watch around, you’ll meet the star of the show. Through the display case back, you can see the Valjoux 72 movement. This column-wheel chronograph caliber operates at 18,000vph and has a power reserve of 48 hours. It features a three-register design with running seconds and registers for elapsed minutes and hours. As you can see, the display case back features black printing indicating that this is the special Vajoux 72 edition of the Chronomaster created for Worn & Wound. But overall, you have a wonderful and nearly unobstructed view of the movement. 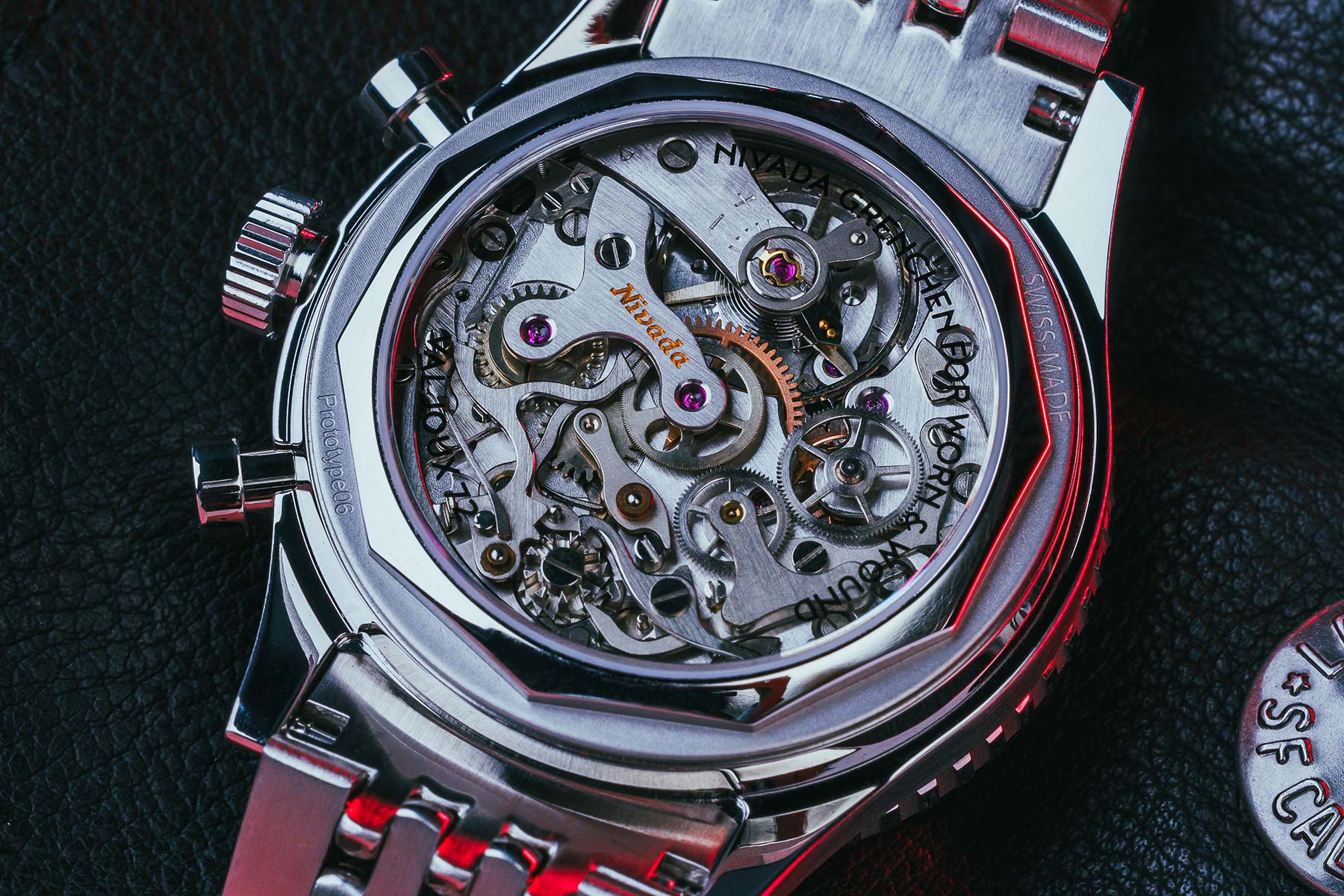 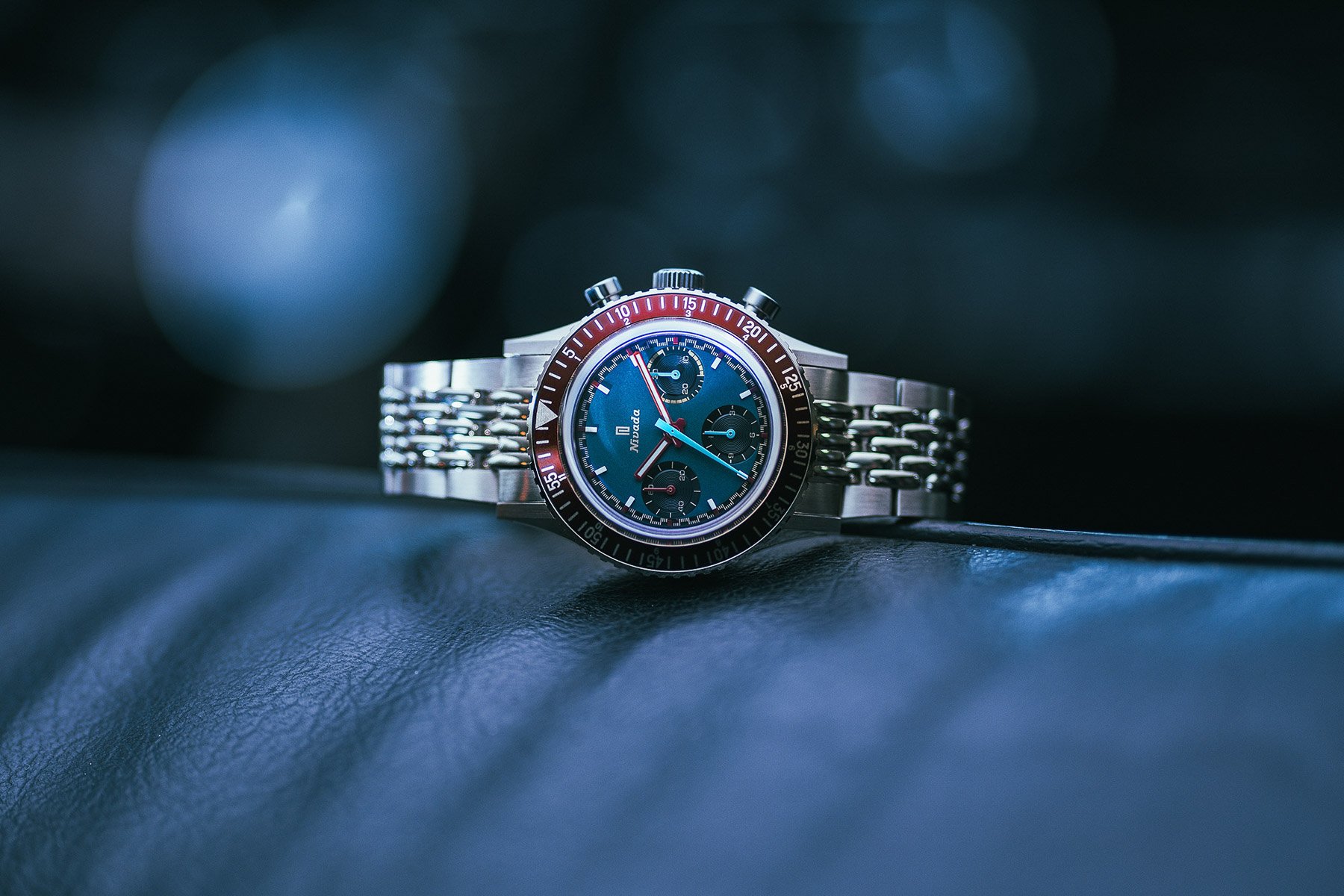 As mentioned, Nivada Grenchen will only produce 20 pieces of this special limited edition. It’s an understandably low number as it is hard to find and restore Valjoux 72 movements. But I love that Nivada did so because it adds great horological value to this fantastic release. On top of that, I adore the color palette of this limited edition. The combination of this grayish-blue dial with the dark red bezel is an absolute winner. It’s not a combination that we see often. When paired with these colorful hands, it makes for a stunning new release. 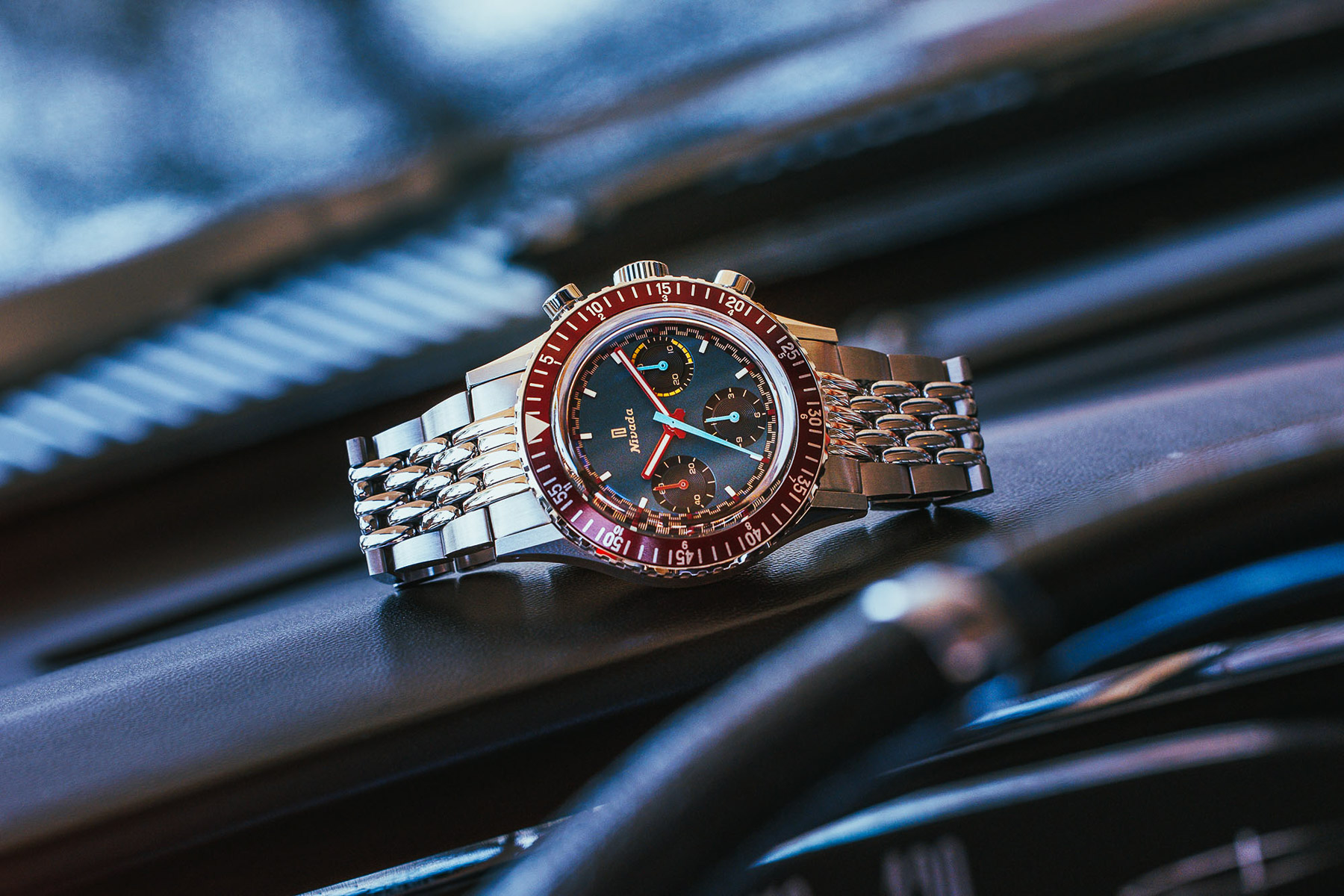 To get one, however, you will have to be quick. The Nivada Grenchen × Worn & Wound Chronomaster Valjoux 72 will sell for US$6,900 on December 8th at 12:00 PM Eastern Standard Time (18:00 CET). What you get in return for that money is one of the year’s greatest releases in terms of its looks and the movement within. I love what Nivada Grenchen and Worn & Wound have come up with, and I have no doubt that far more than 20 people would love to get their hands on this stunner. 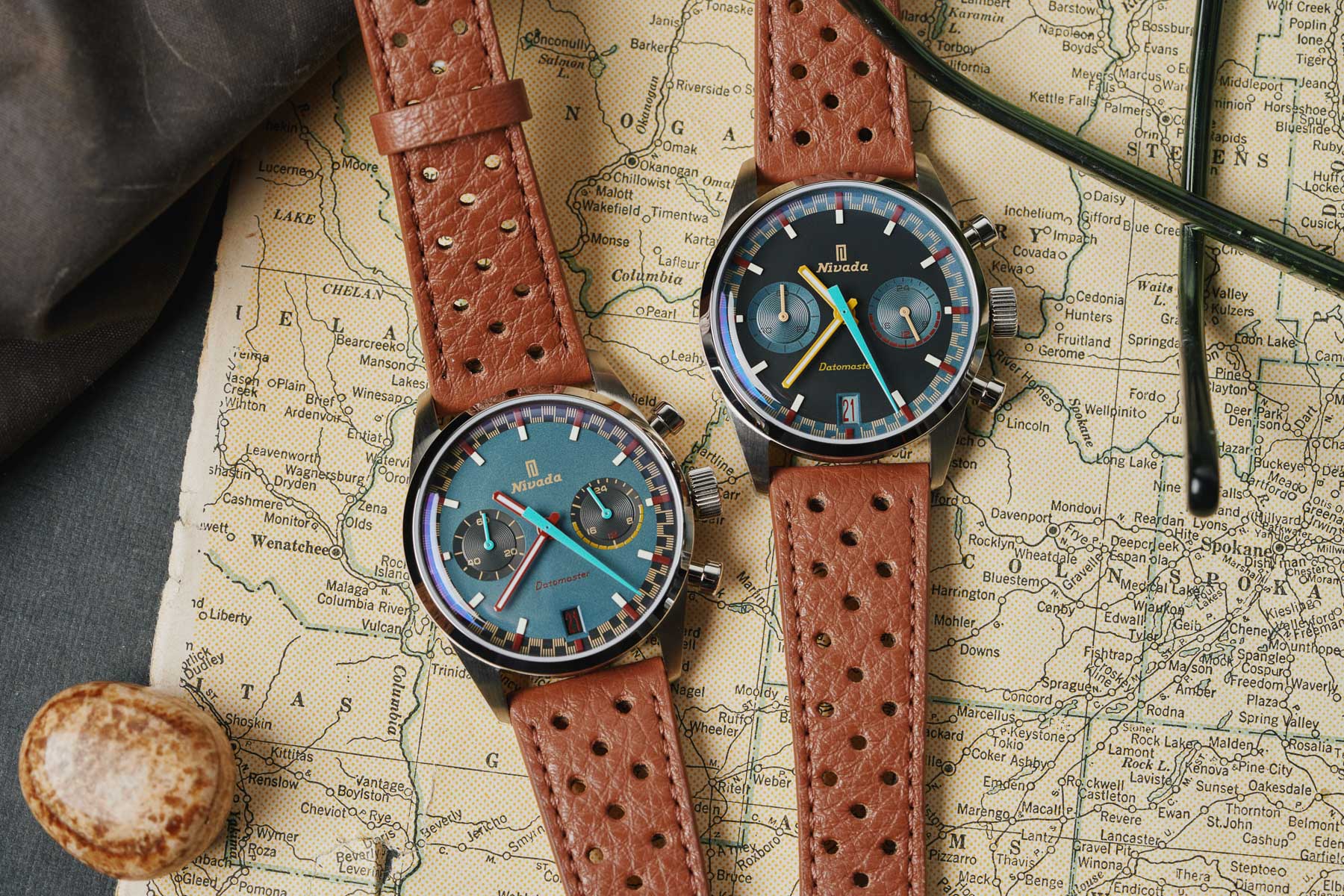 But it’s not where the fun ends. Nivada and Worn & Wound have also worked together on two Datomaster VK64 models that feature the same aesthetic as the Chronomaster. These two Datomasters are powered by Seiko’s VK64 meca-quartz chronograph movements that we have seen used by many different brands in recent times. The two watches feature a 36mm stainless steel case that is 12mm thick, 43.5mm from lug to lug, and water-resistant to 100 meters. 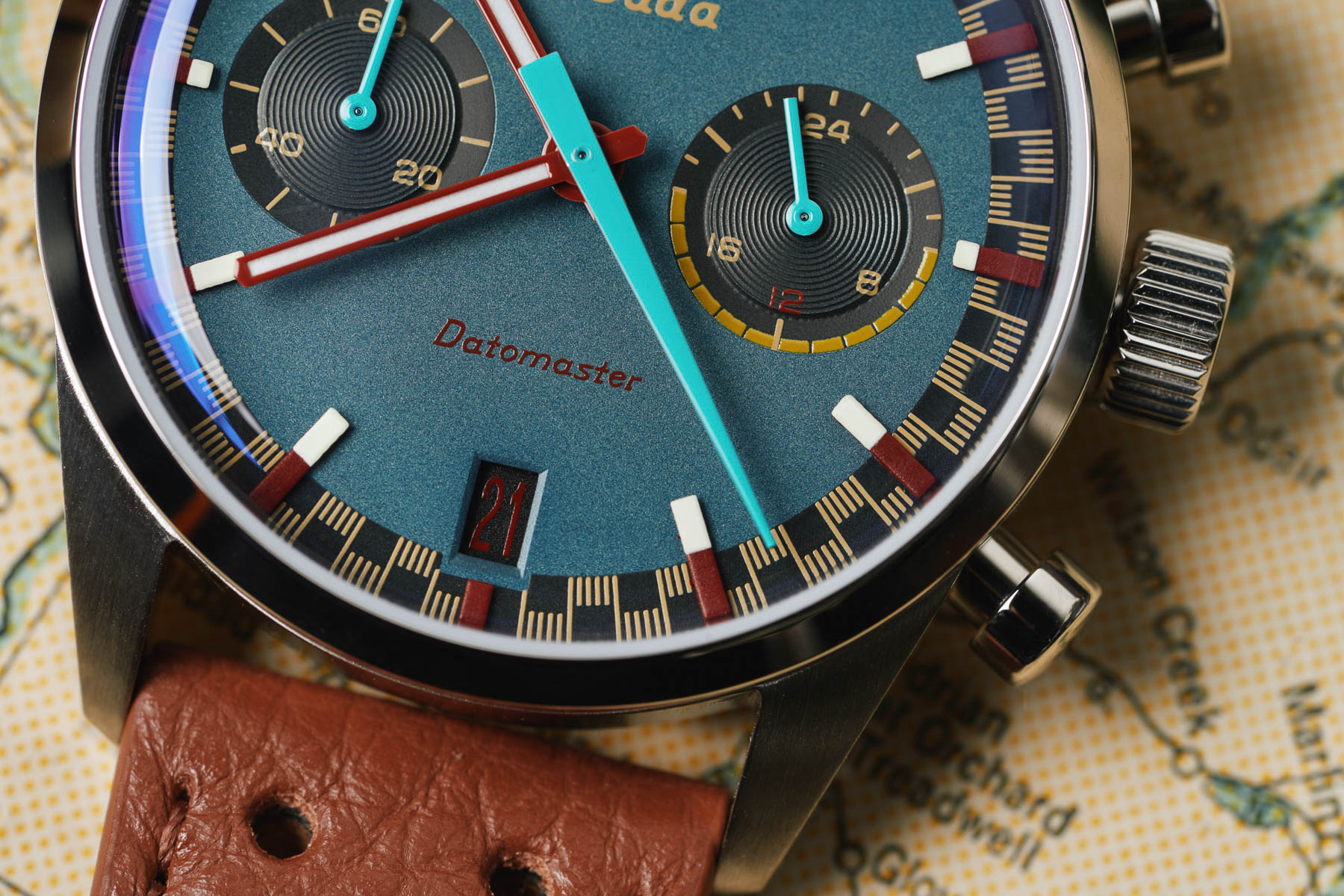 The watches may be modestly sized, but the same racing aesthetic ensures that they will pop off your wrist (figuratively speaking, of course). The first of the two models features exactly the same color palette as the Chronomaster. In addition to this, the watch includes a date window at 6 o’clock. The date disc is executed in black with the dates printed in dark red. I love that the date is executed almost stealthily to add to the overall style. It would have been easy to pick white for readability, but sometimes the obvious way is not always the best in my opinion. 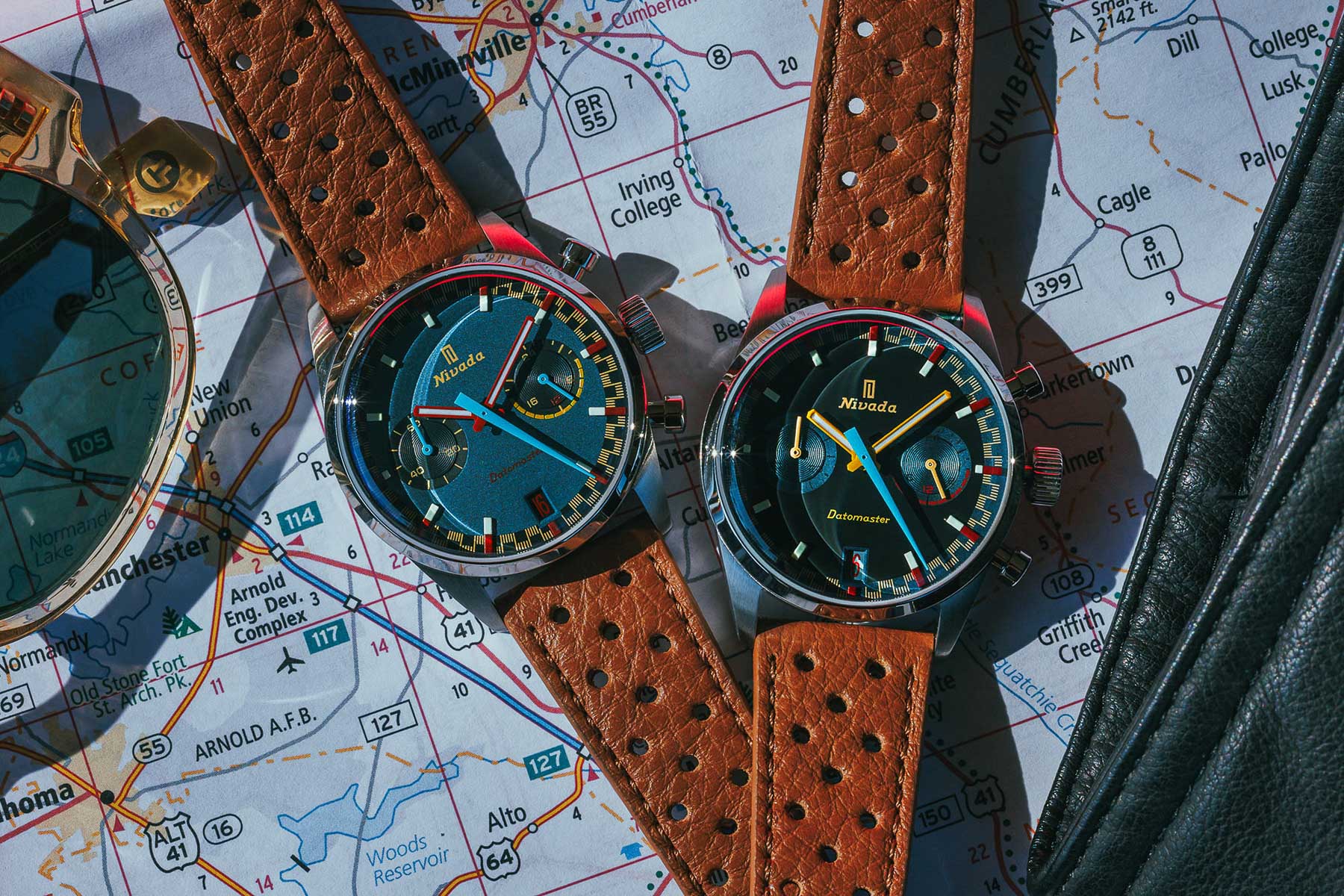 The Datomaster builds on the aesthetic of the Chronomaster

The second of the two uses the same colors but in an inverse setup under the mineral crystal. It features a black dial with a fog-gray outer ring with khaki printing. The sub-dials are also executed in the same grayish-blue color with black and red printing. The hour, minute, and sub-dial hands come in a mustard-yellow color while the central chronograph hand is in the same bright cyan as on the other two models. Both Datomaster variants come with a brown racing-style leather strap to complete the look. 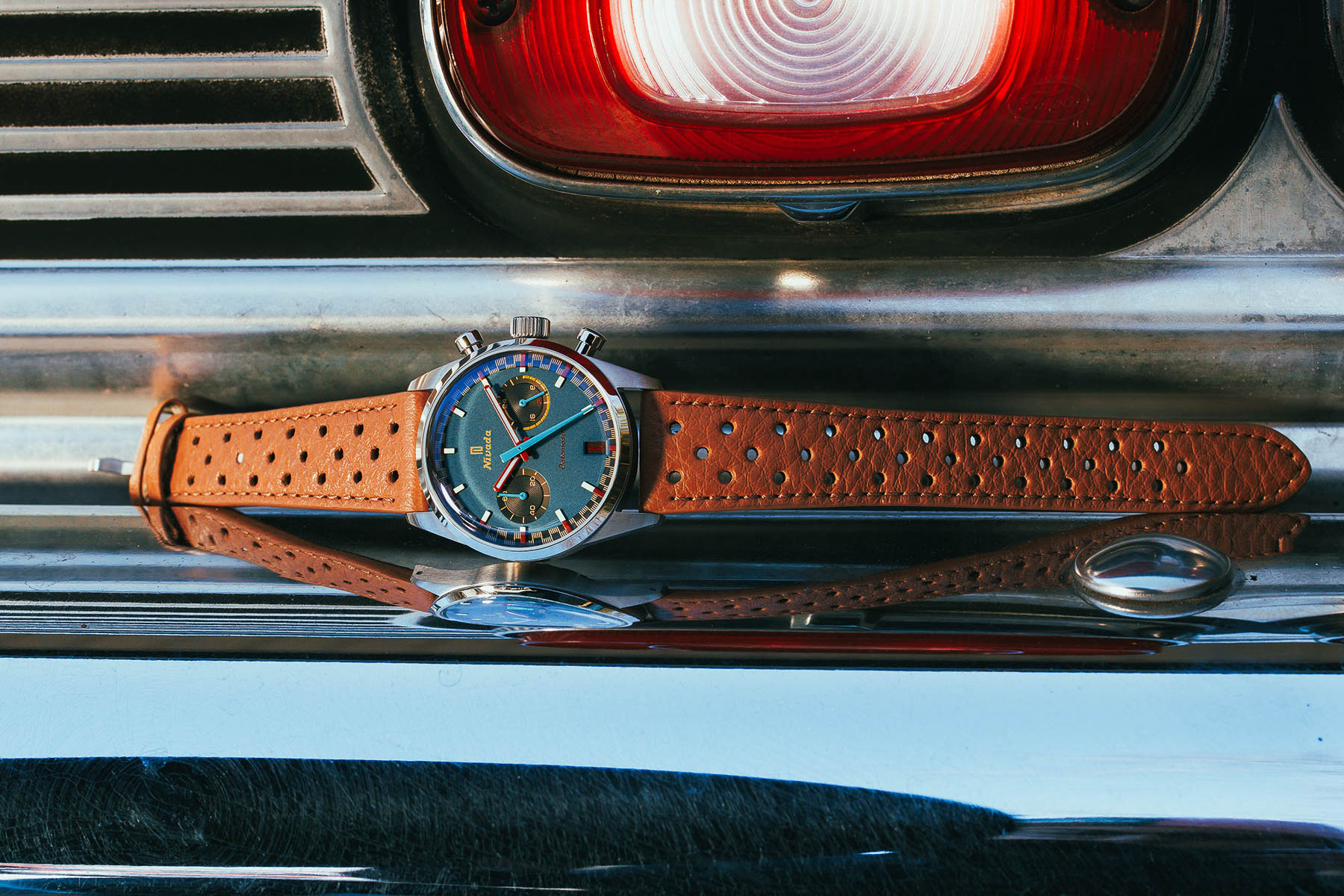 As mentioned, these two models are powered by the Seiko Instruments VK64 meca-quartz movement. The movement combines quartz timekeeping with a mechanical chronograph gear train. As many of you will know, this results in the great accuracy of quartz with the feel of a mechanical chronograph. The two Nivada Grenchen × Worn & Wound Datomaster VK64 models will sell for US$450. Both watches will be available during a 72-hour order window starting December 7th, 2022 at 12:00 PM EST (18:00 CET). To be clear, the window ends on December 10th, 2022 at 12:00 PM EST (18:00 CET). All watches sold in that time frame will be produced and not a single unit more.

A stylish collaboration to end the year 2022

From the moment the Nivada Grenchen × Worn & Wound limited editions landed in my inbox, I have been impressed by their style. It goes without saying that the Chronomaster Valjoux 72 is the most desirable of the three. It is a perfect combination of style and substance. Finding 20 Valjoux 72 movements and restoring them for this limited edition is something truly special. I love that Nivada Grenchen took the time to make that happen for the true fans of classic chronographs. 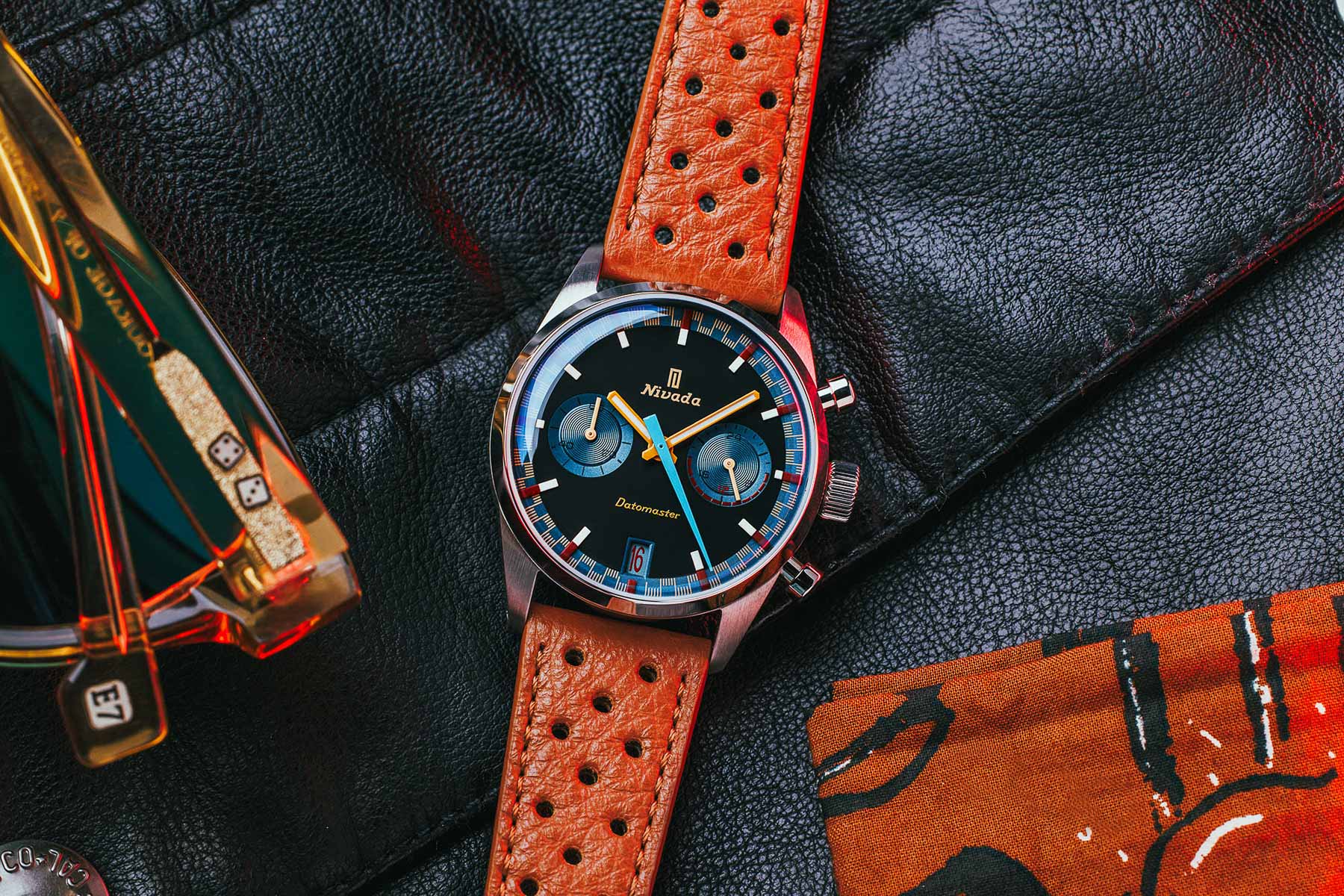 The color scheme of the Chronomaster — or all three watches, for that matter — is a lot less classic than we usually see. Still, I adore the colors chosen. They work very well together and provide a look that you will rarely (if ever) come across. This is why you will recognize this special edition a mile away, and once you do, it will be a great conversation starter. Both the colors and the movement make the Chronomaster Valjoux 72 the full package and a unique and stunning release. The two Datomaster VK64 models provide that same stylish presence for those looking for the same style but unwilling or unable to spend the asking price for the Chronomaster. However, I have no doubt that the 20 pieces will be sold in a matter of seconds. 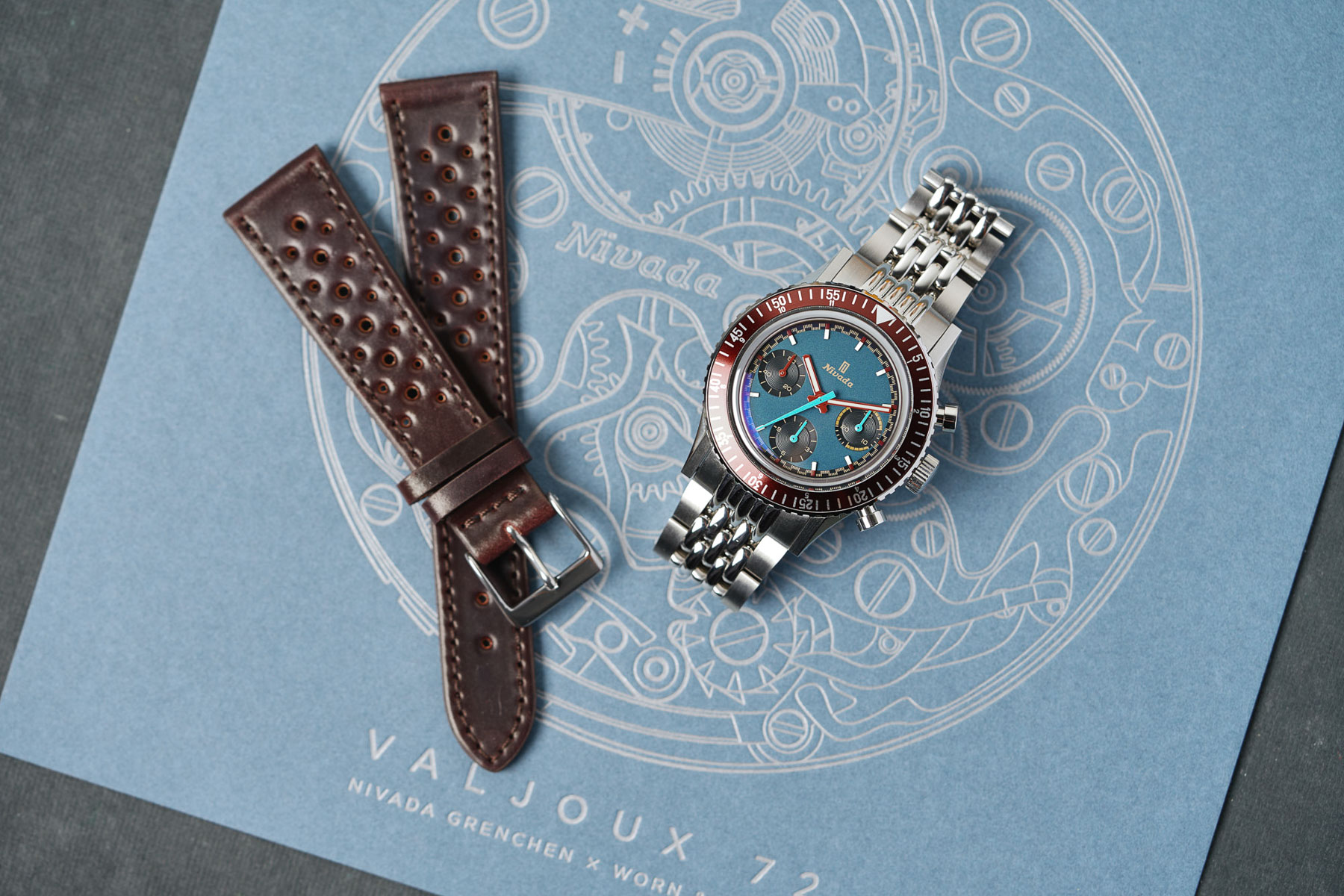 Overall, these three releases add a colorful touch to the last month of the year. If you are interested, make sure to head on over to the respective pages to order. You can try to get your hands on one of the 20 Chronomaster Valjoux 72 pieces here. 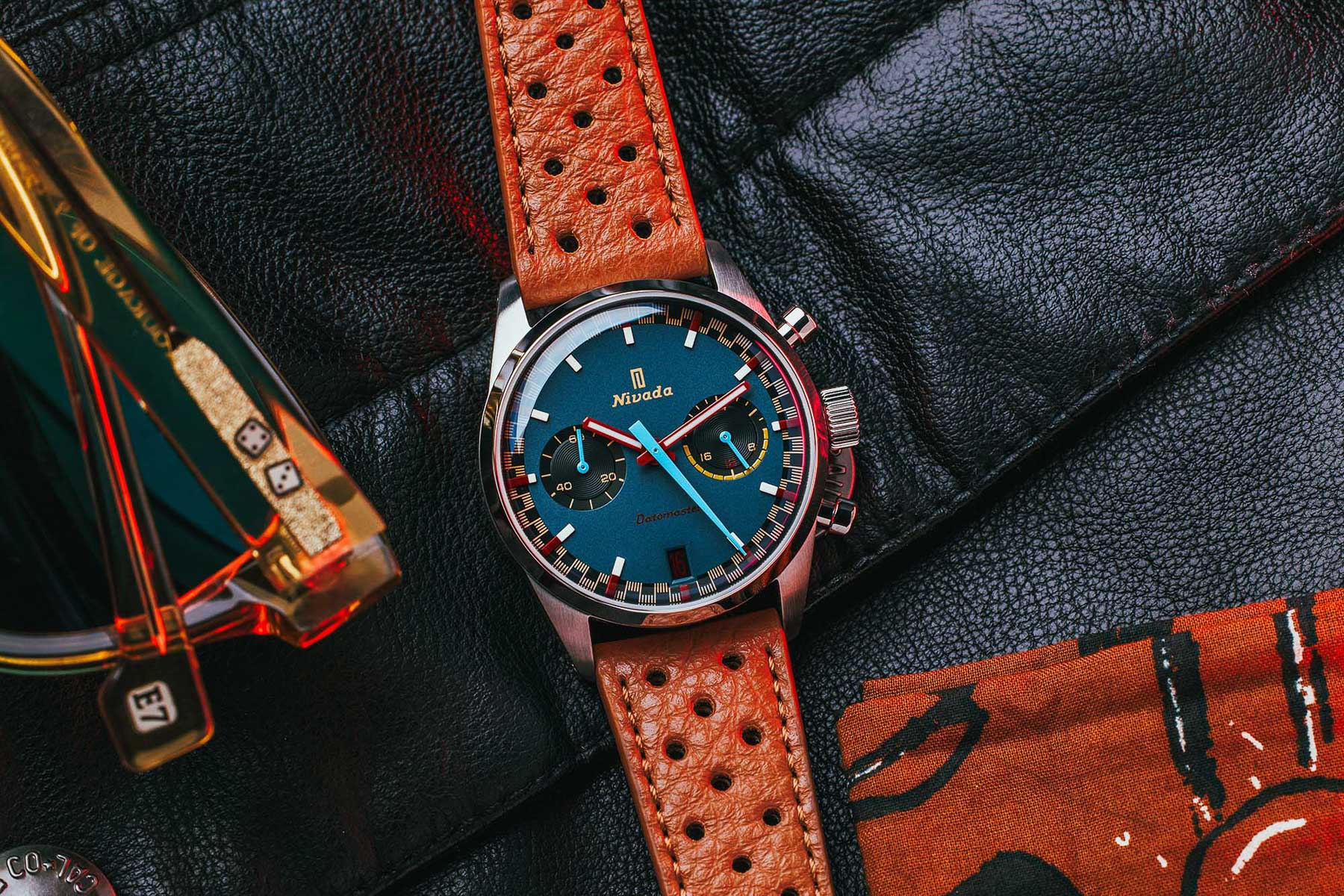 If you are more interested in the Datomaster VK64, you can order one or both through the product page here. Though we will likely see a few more watch releases in the final weeks of 2022, it will be hard to top the Chronomaster Valjoux 72 as one of this year’s best.

Let us know in the comments section which one of these three new timepieces stands out to you!