What would you call a modern watch that looks like the vintage model that served as inspiration? A re-edition, right? The measurements would be a tad larger to accommodate modern tastes, perhaps. Maybe, the design might have some minor changes. But otherwise, the watch would be identical to the original. Inside, however, you’d have a new, often automatic, movement. Now, imagine the same scenario with a watch that is not only the spitting image of the vintage counterpart but has the same movement as well? The new Nivada Grenchen Chronomaster Aviator Sea Diver “Paul Newman” Panda and Reverse Panda are precisely that.

The vintage Chronomaster, “Paul Newman” models, are sought after among collectors. They were only made in small numbers and had the “Paul Newman” Daytona -style sub-registers at the 9 o’clock position. This is where the nickname comes from. Furthermore, inside them beat the legendary Valjoux 23 caliber. Amazingly, the new Nivada Grenchen Chronomaster “Paul Newman” is also equipped with the Valjoux 23. I guess we can’t call these watches a re-edition. Perhaps they are recreations? Or maybe it is simply a “return”?

Chronomaster on the rise

Last September, amid the pandemic but between two waves when life was somewhat open (at least in Europe), Mike and I drove up to the Hague to the Fratello HQ. As we usually do when we meet, Mike brought some of the watches he had for review, and I did the same. He showed me the then-new Breitling AVI 765 as well as the Aquastar Deepstar. As for me, I also had a reedition of a vintage diver chronograph in my bag; the Nivada Grenchen Chronomaster Aviator Sea Diver. Since the brand came (back) to the market, I’ve been following its endeavors. As one of a selected few, Fratello usually has access to the latest and greatest in advance so we can report on these new creations on time. Still, I was beyond excited when I laid hands on the new “Paul Newman” Chronomaster just a few weeks ago. 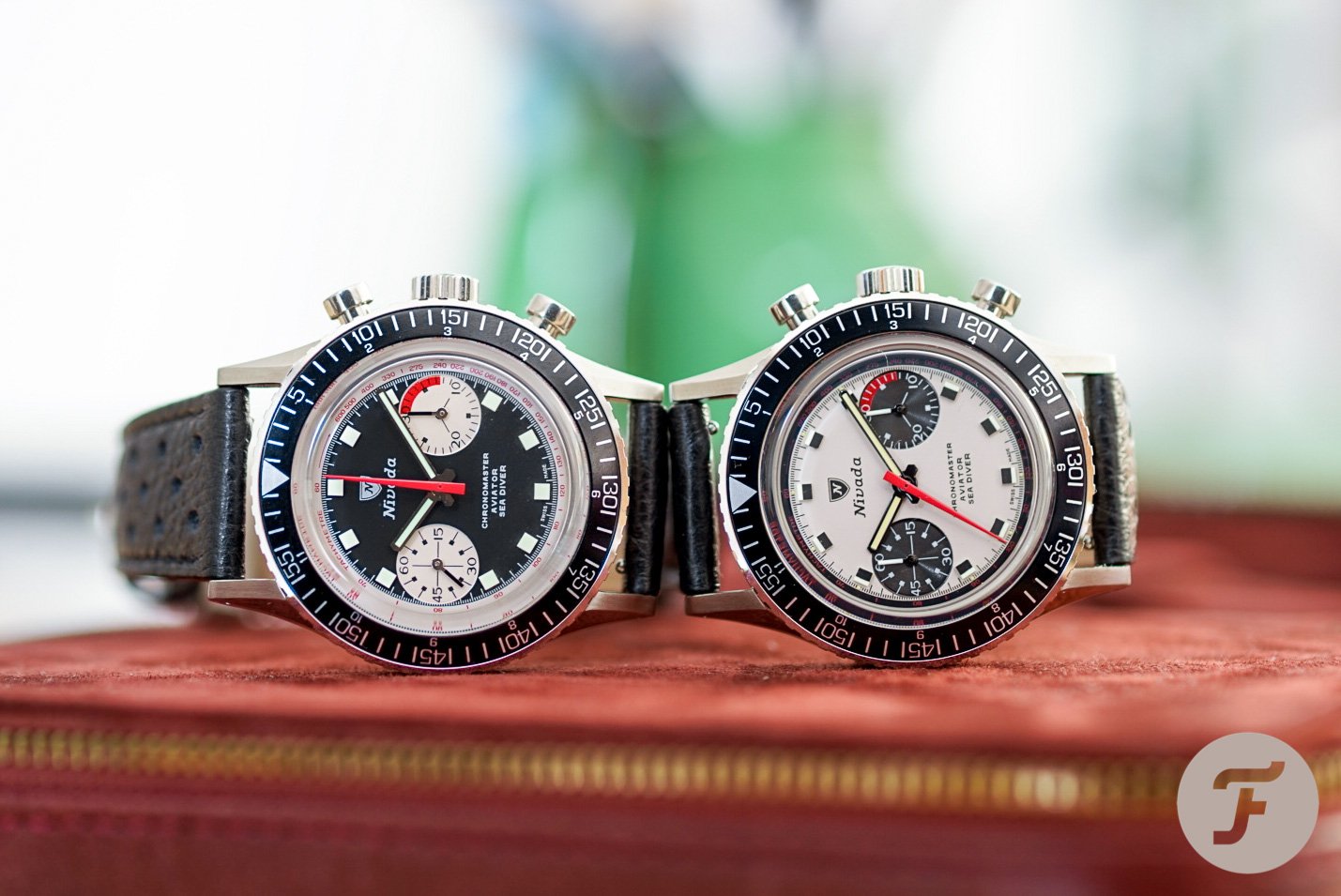 We all know the story of the Rolex Daytona (ref. 6239) and why collectors named it the “Paul Newman”. One of the most prominent features of that watch was its sub-dial markings; long, thin white indexes with white squares at their tips along with Arabic numerals in an unusual font. However, this was not a Rolex-only feature. Singer, the manufacturer of those dials, used the same design on several other models. Vulcain, Wakmann, Candino, and Nivada were all among the brands that received dials with such sub-registers. On the other hand, there have been so many Nivada Grenchen Chronomaster Aviator Sea Diver models over the years that collectors started to name them for the sake of better differentiation. That’s how the two versions of reference 85017/4531 got their nicknames: the White Paul Newman and Black Paul Newman, thanks to their panda and reverse panda dials. 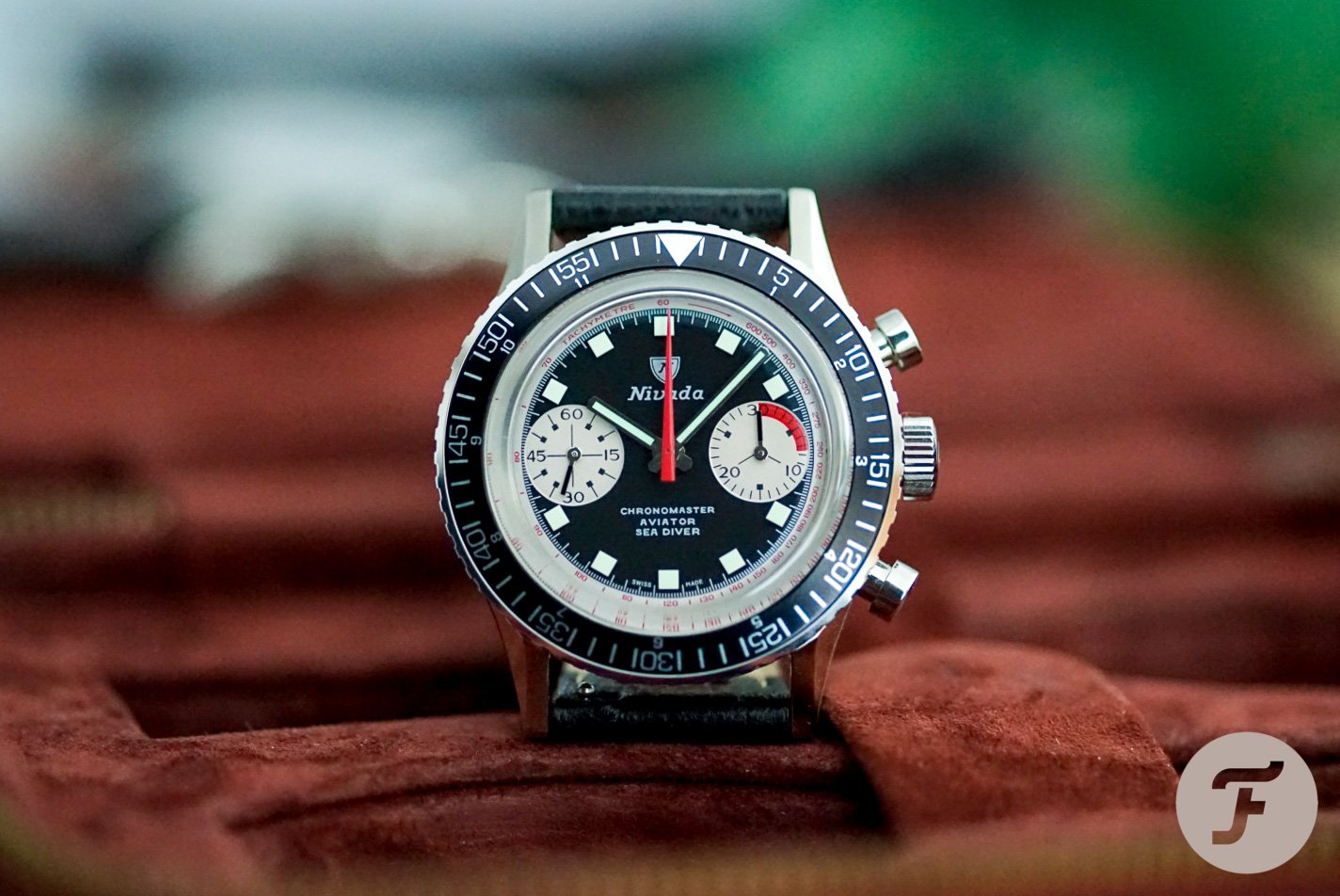 Recreation of an icon

This is a hands-on review of a new watch, though, so let’s not dwell too long on the vintage topic. Nivada has a massive pool of vintage Chronomaster models to choose from, and the brand did well with the initial pieces. Anyone who was a fan of that look could find a model they liked.

Do you prefer broad arrow hands? Nivada has a model that caters to your taste. Are you into the modern logo and stick hands? The brand’s got you also.

It was only a matter of time before they reached back to this iconic look as well. Still, not many of us would’ve thought about a new release and seeing the iconic Valjoux 23 inside them. How is this possible, you might ask? Well, Switzerland is a magical place for so many reasons. 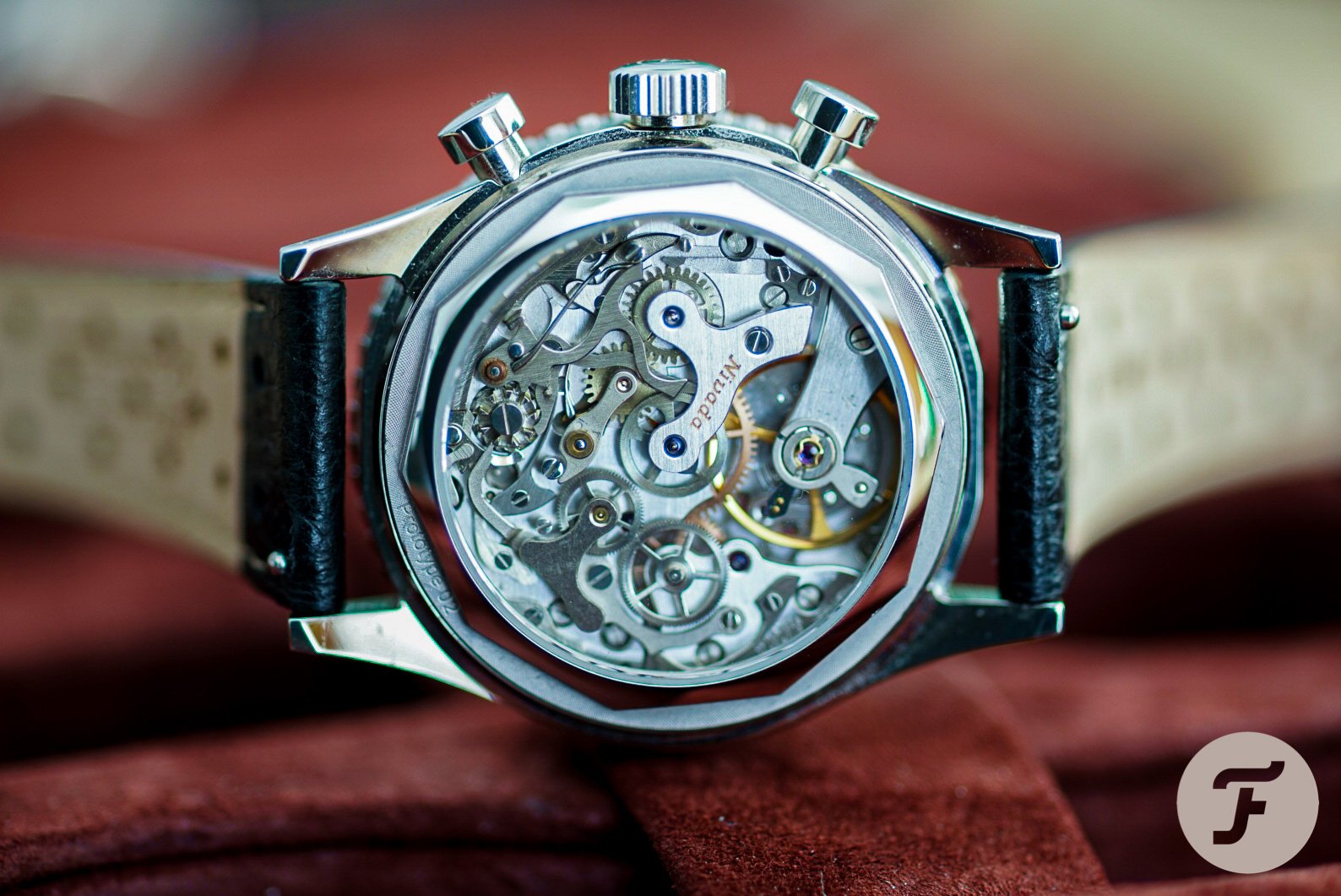 One of them is that you can still find new old stock (NOS) parts and movements laying around in secret warehouses and watchmakers’ drawers. That is exactly how this project came to life. The brand managed to source only a small batch of movements. Due to the limited resources, only 25 pieces are available for both panda and reverse panda versions. Furthermore, the lucky owner will have the chance to choose between open or closed case backs. While the display back is not period correct to this model, it has to be the better choice, in my opinion. Through it, you can admire the magnificent Valjoux 23 column wheel caliber and the Nivada-engraved bridge. Just like you would see it on the vintage Chronomaster “Paul Newman” models. 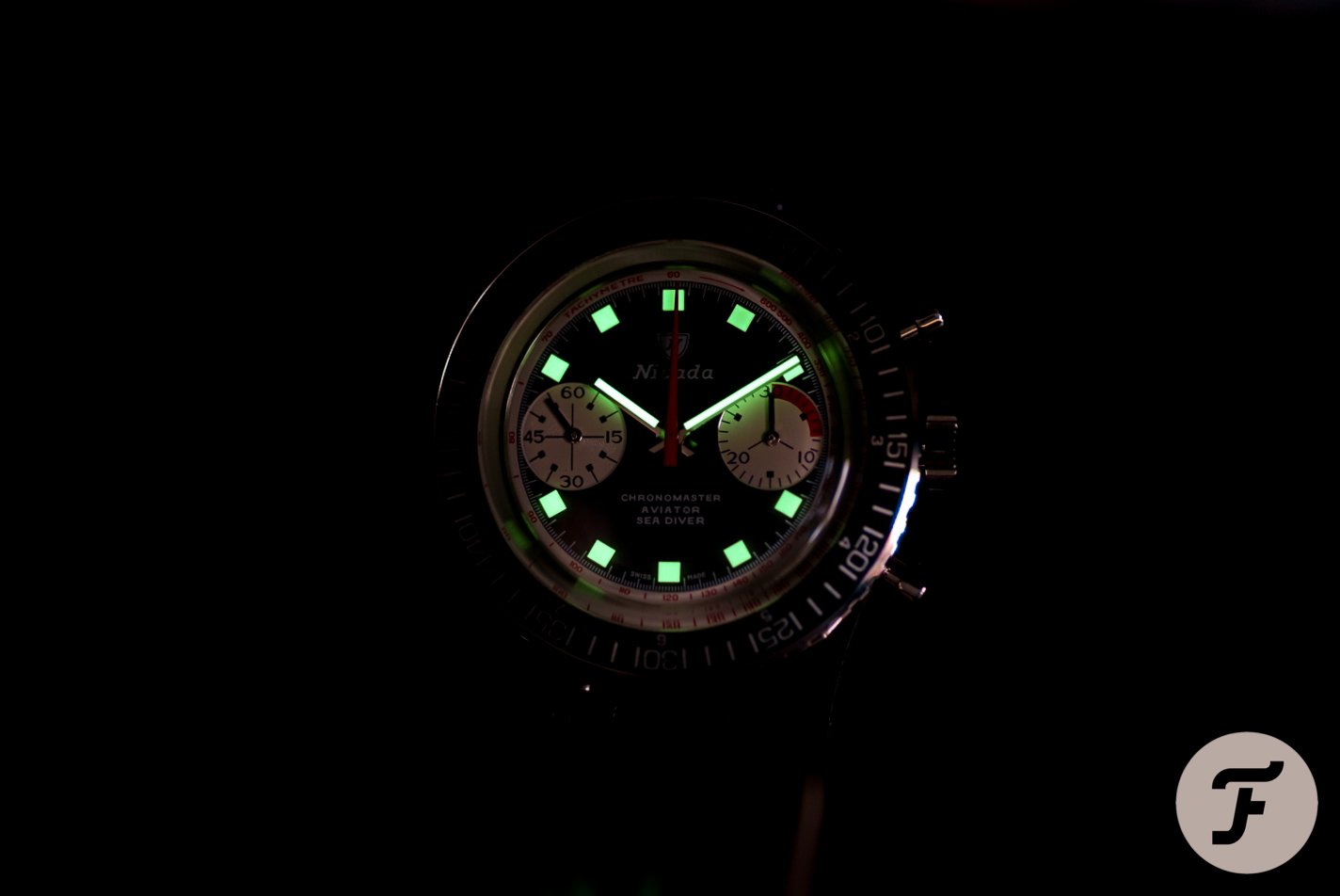 The Chronomaster “Paul Newman”, just like all the other Chronomasters from the past, stayed true to the original model in terms of size. I’m a vintage guy, and this size appeals to me, although I must admit lately, I’ve also been into larger, thicker watches (enter the Synchron Military). Still, at 39mm (46.4mm from lug tip to lug tip), the watch wears great on my 7.5” wrist. the thickness (13.6mm) is standard for a mechanical watch and poses no problem whatsoever. Although under “feel” we should not only talk about the wrist presence. There is a NOS Valjoux 23 chronograph movement beating inside the watch after all. When I operate the chronograph with the top pump pusher, I can’t help but quote Mike with one of his catchphrases: “Nice action on the pusher.” The watch works smoothly, the chrono runs promptly, and the view of the mechanical caliber in action is magnificent. 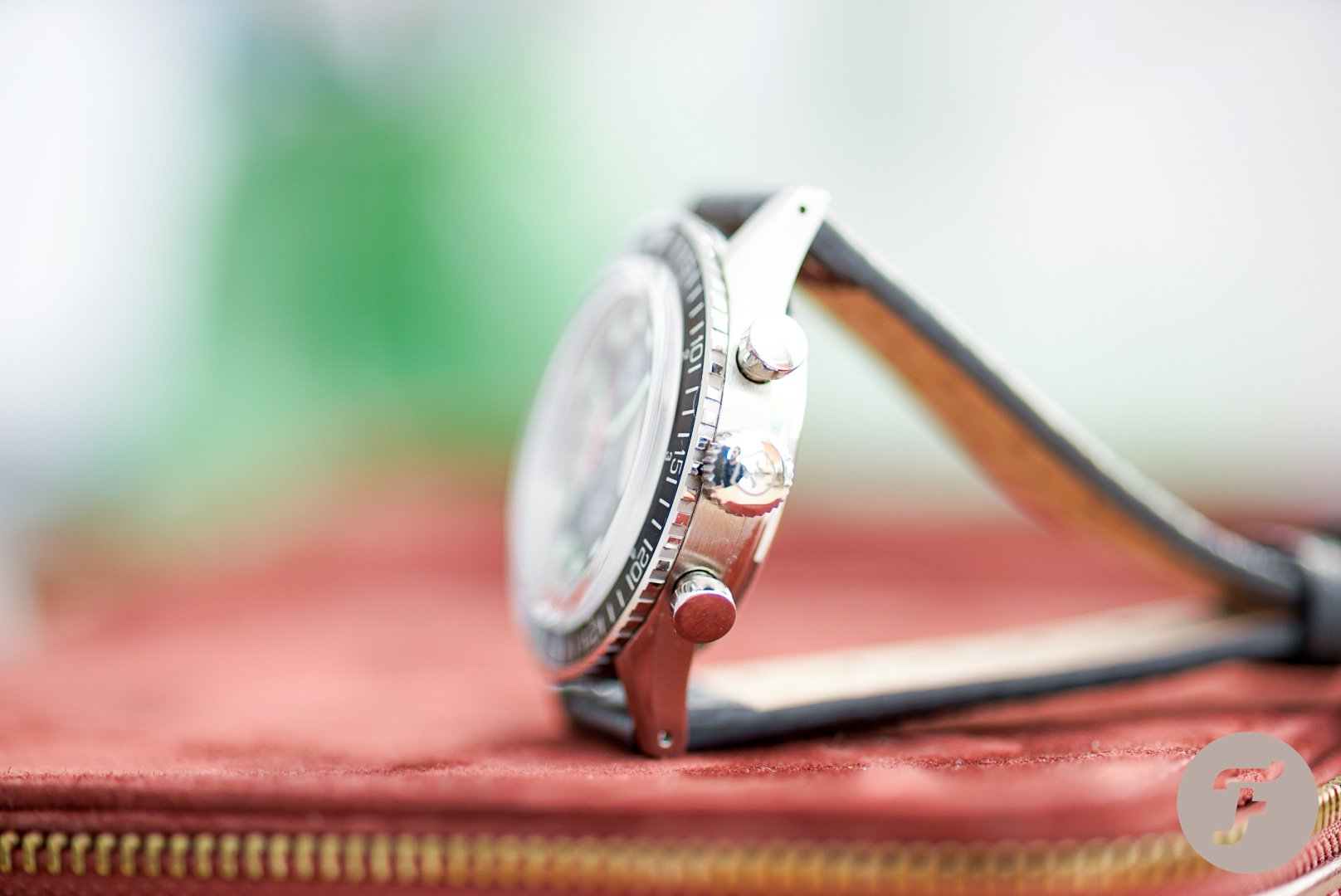 I will not bore you with the technical details; you can find them on Nivada’s website or below the article. What I need to talk about, however, is what it takes to get one. Quite a few of those 50 pieces are already allocated, so you have to be quick if you want to secure one for yourself. I must warn you though that it won’t be cheap. For either panda or reverse panda Nivada Chronomaster “Paul Newman”, you’d have to pay $5,350 (ca. €4,573). Is this watch worth the price? Well, you have to decide that. 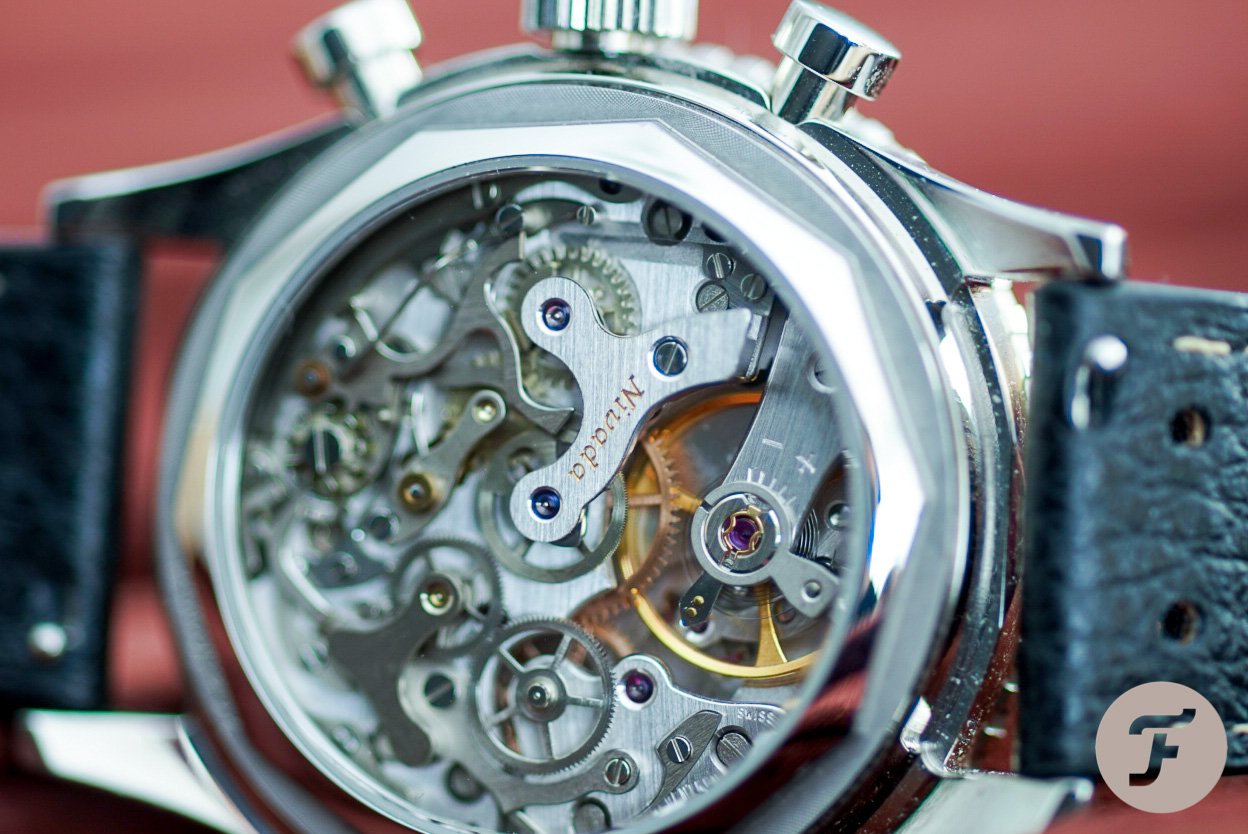 Nevertheless, once we realize what went into the production of this super limited release, I think you have your answer and justification. Am I going to get one? Well, unless I “forget” to send the watch back, the answer is no. But if I had the funds at the ready, a reverse panda “Paul Newman” with a display case back would already on its way to my address in Germany.