To date, I have only seen one meteorite dial in the metal. I instantly fell in love with the uneven and otherworldly texture of this foreign organic material. And although the meteorite traveled the universe for billions of years, it felt familiar. Perhaps it’s due to the fact that I’ve seen dozens of photos of meteorite dials on the internet before. Or perhaps it’s because we humans come from the same intergalactic depths as the material itself. Nevertheless, when you combine meteorite with fine Swiss watchmaking and encase it in a 200m water-resistant stainless case, you get something special.

Two months ago, RJ wrote about the first Zodiac × Watches.com collaboration. He introduced the first 182 meteorite dials on a Super Sea Wolf chassis. The first model had popping orange tones contrasting with the otherwise gray dial and case. RJ went over the specifics of the dial material itself and where it comes from, so I will refer you to his article for more details on that. In this article, I will first talk about the use of meteorite in watches before going over the specifications of this release. 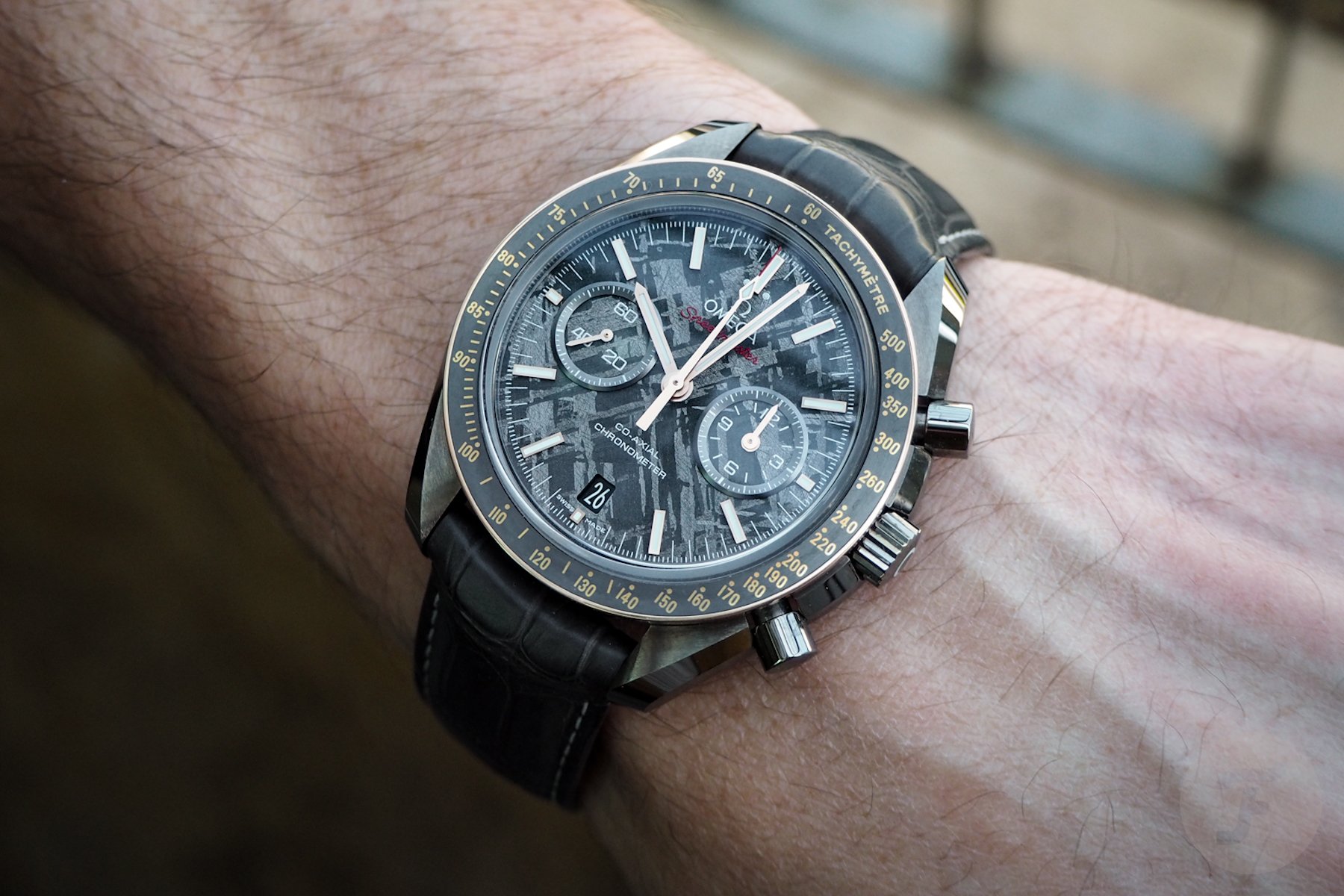 Besides the fact that meteorite is an organic material that has traveled through space, how did it come to be used in watches? Honestly, I had to do some research to find that out. Meteorites are debris from a comet or asteroid that crashed on Earth. They have been used in religious and decorative items since the time of Ancient Egypt’s Pharaohs. But, as is often the case, Rolex pioneered its use on watch dials. The brand first offered meteorite dials in certain Daytona and Day-Date references. Despite my best efforts, I could not figure out in what year this first happened.

Making a meteorite dial is not an easy task. The material itself is hard to work and fashion to fit on a dial plate. The slice of meteorite (or sometimes a tube) goes through an acid bath which is what reveals its Widmanstätten pattern, also known as a crystalline pattern. These are the random crisscrossing lines that make a meteorite dial fascinating to look at. But they only begin to pop after laborious work that involves cutting and polishing the meteorite to bring out certain colors and tones. 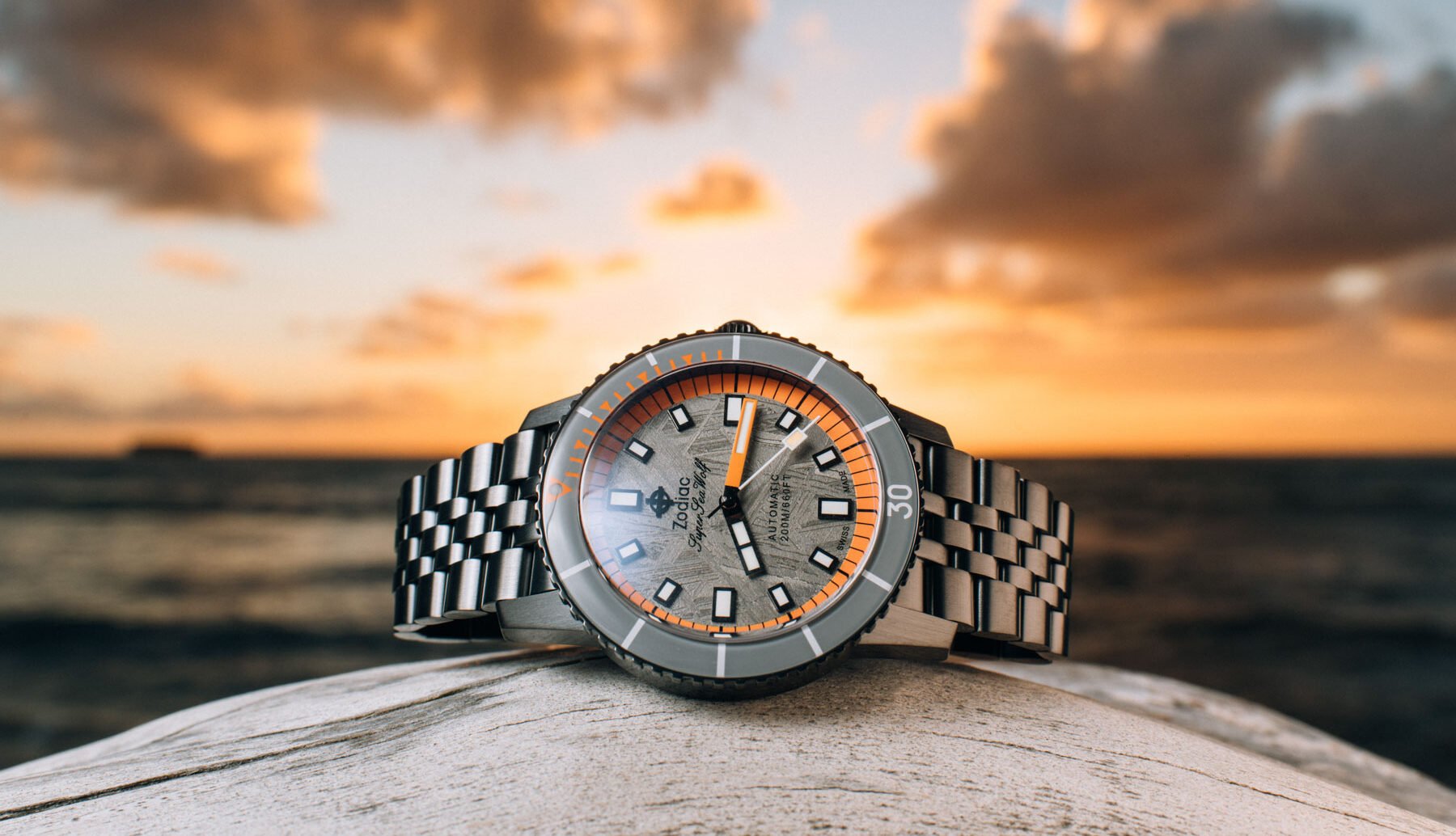 We often hear people say that no two meteorite dials are the same. This is true, and it’s due to a few factors. The first is the specific meteorite that was extracted from — in the case of this Super Sea Wolf, that’s the Muonionalusta meteorite. Second is the angle at which the slice was cut, and third is how it has been treated by the watchmaker to fit the watches. The more I read about it, the more fascinated I am. Although this type of dial is not everybody’s cup of tea, perhaps we can agree that it’s cool. 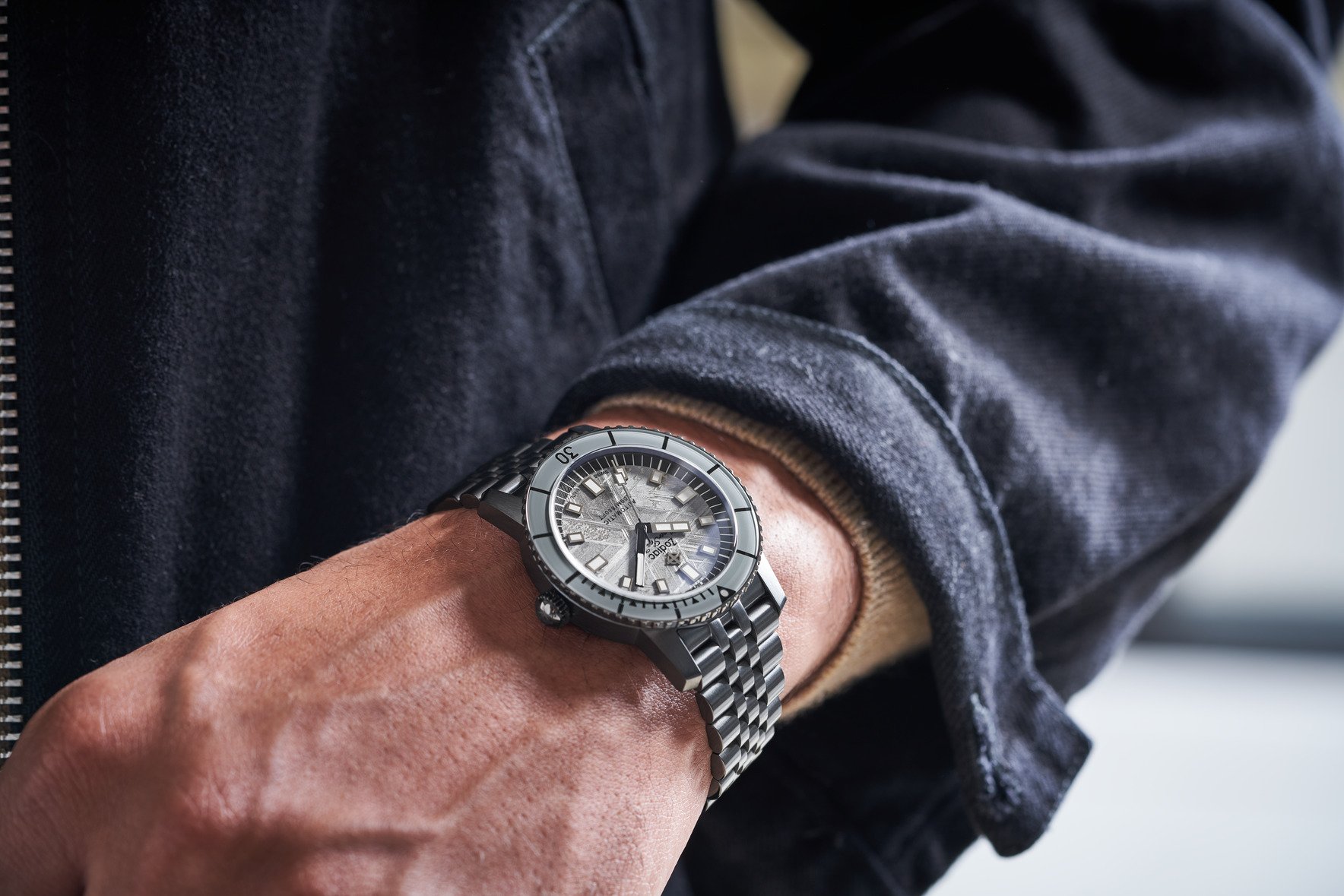 But at its core, the Super Sea Wolf Meteorite is a watch, and we need to discuss its specifications. The case measures 40mm in diameter and 13.9mm in thickness with a 20mm lug width. The case is made of stainless steel that has been coated with DLC. This coating gives the watch the space-gray color that we also find on the dial. The movement inside is the Swiss-made automatic STP 1-11. It beats at 28,800vph (4Hz) and comes with 26 jewels and 44 hours of power reserve. If you are familiar with Zodiac and the Super Sea Wolf, you’ll know the watch also has 200 meters of water resistance.

What makes the Super Sea Wolf a true Zodiac watch is the dial layout. It is designed to be legible and practical, featuring baton hands and rectangular applied markers, both filled to the brim with lume. The minute track sits slightly above the central portion of the dial, where the star of the show shines. In an incredible way, Zodiac reinforced the utilitarian aspect of the watch despite having opted for a meteorite dial. The different shades of gray on the dial and bezel contrast with the lumed portions of the hands and markers. This guarantees ultimate legibility.

At the end of the day, a Super Sea Wolf is a tool watch, regardless of what the dial is made of. 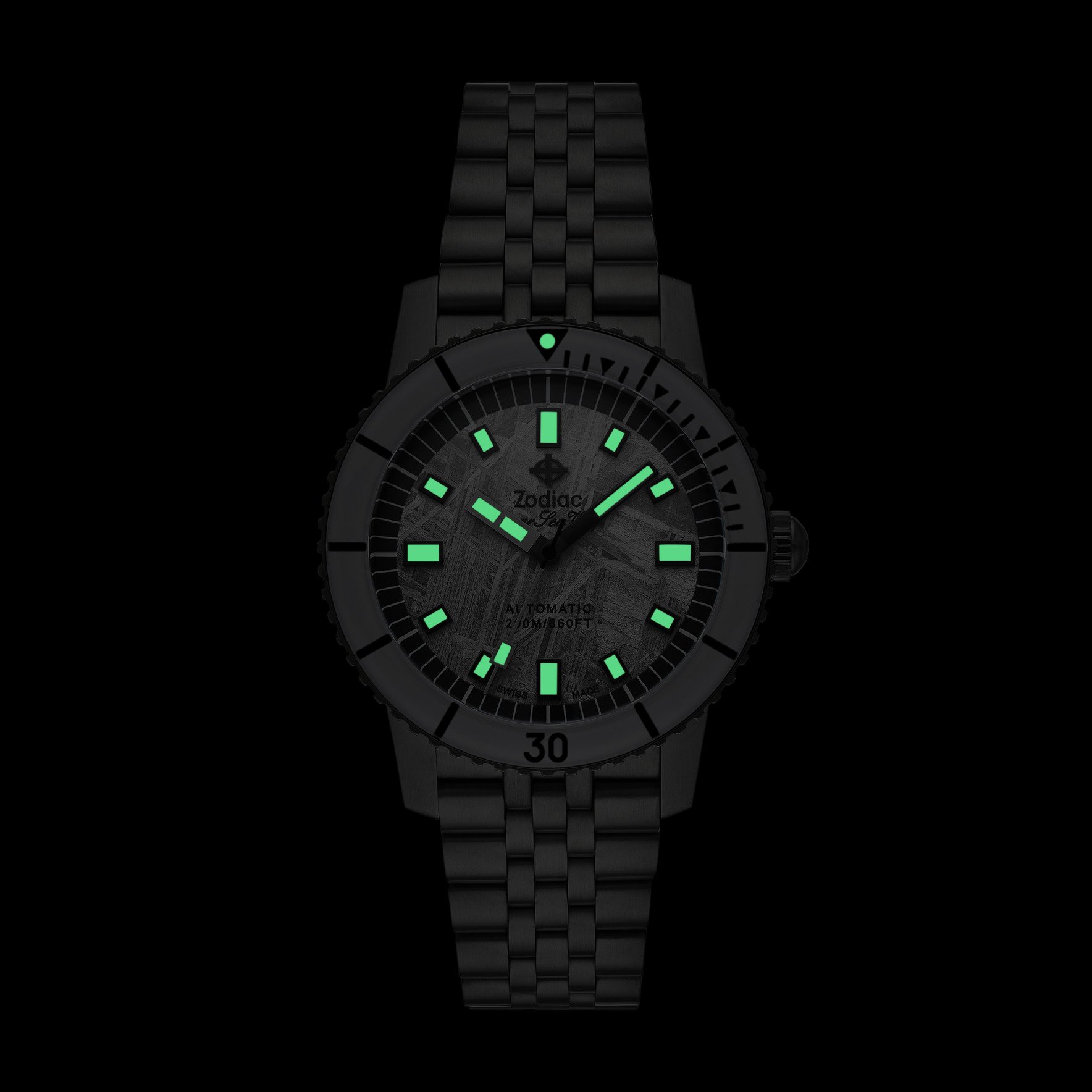 So, what are your thoughts on this newest release from Zodiac × Watches.com? Are you into meteorite dials, and if so, would you buy this watch? If you liked the previous version, I assume you will enjoy this one equally. Given that only 182 of these will be made and that they retail for US$1,795, they will likely sell out quickly. These will be sold exclusively on Watches.com starting today, November 21st, 2022.