Simply reading the fact that MB&F has created 20 calibers in its 17 years of existence is nothing short of impressive. On top of that, every release has pushed the boundaries of creativity, making you realize just how special MB&F is. It’s not that we didn’t know that already, but just reading the facts creates a pretty good idea of the brand’s impressive achievements. But it doesn’t stop just yet. For the 20th caliber, the brand decided to do something truly special. With the MB&F Legacy Machine Sequential EVO, the brand introduces its first chronograph. And as you would expect, it’s not just any old chronograph. Time to check out this phenomenal watch.

MB&F introducing a chronograph — now that is some exciting news! It’s not that we thought that it could never happen. Whether it would happen, though, was a different matter all together. In the brand’s own words, “Maximilian Büsser never said that MB&F would never make a chronograph. What he did say is that MB&F would never make a chronograph like all the other chronographs out there.” And that’s the mission the brand set for itself. And you know that Max Büsser and his horological comrades would not introduce the watch if they didn’t succeed in coming up with something truly special. To achieve this tour de force, MB&F once again worked together with Stephen McDonnell. He previously reinvented the perpetual calendar complication for MB&F with the award-winning Legacy Machine Perpetual. 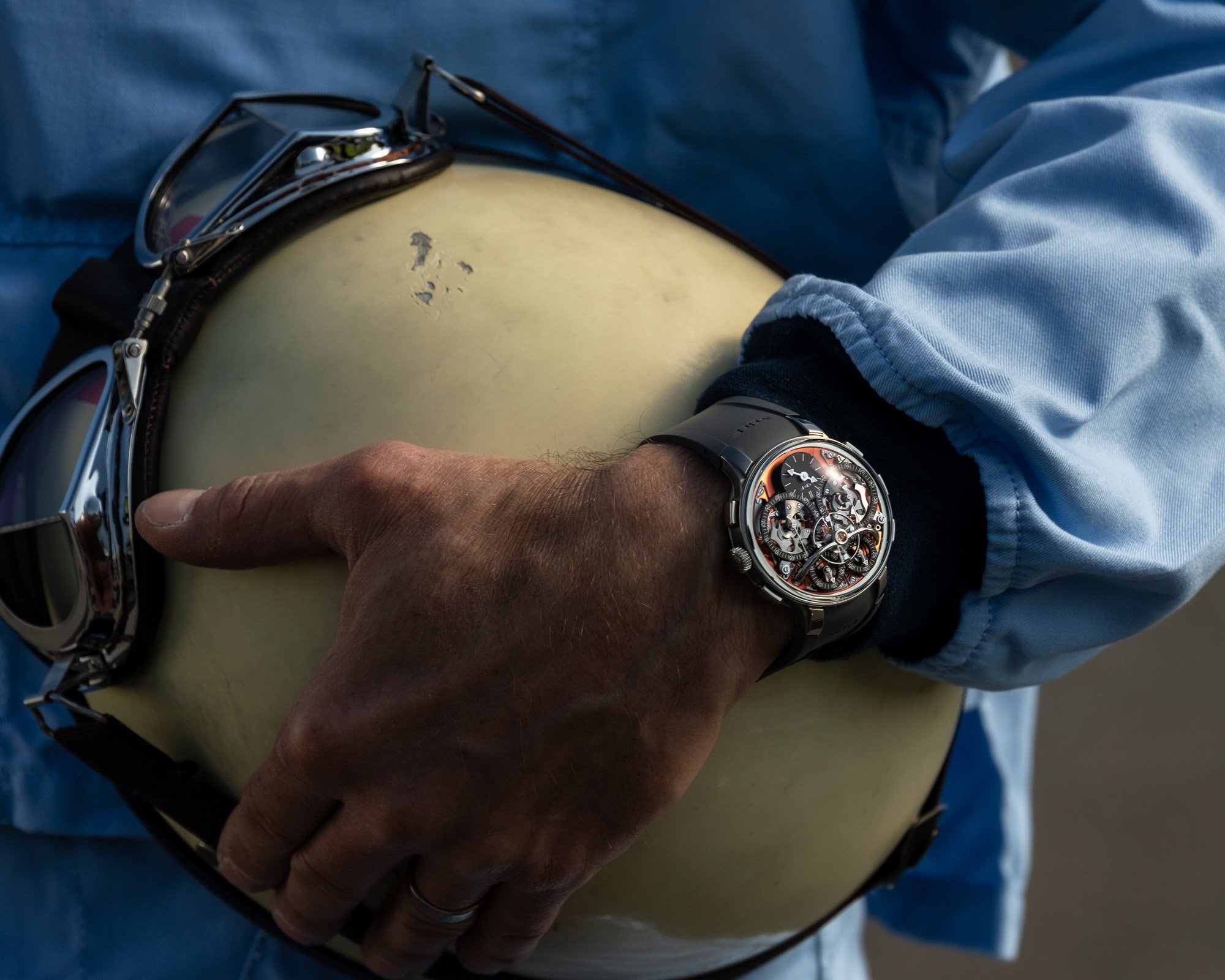 The concept of the Legacy Machine Sequential EVO

Knowing that McDonnell pushes the boundaries in his creations, you can be sure that he wouldn’t design a run-of-the-mill chronograph. He once again reinvented a classic complication and came up with something spectacular. The Legacy Machine (or LM) Sequential EVO features a single movement with two column-wheel chronographs. The watch also features what the brand has named a “Twinverter” binary switch. This switch makes it possible to access multiple timing modes including split-second, independent, and lap-timer modes. It’s an achievement that we have not seen before in any existing chronograph. 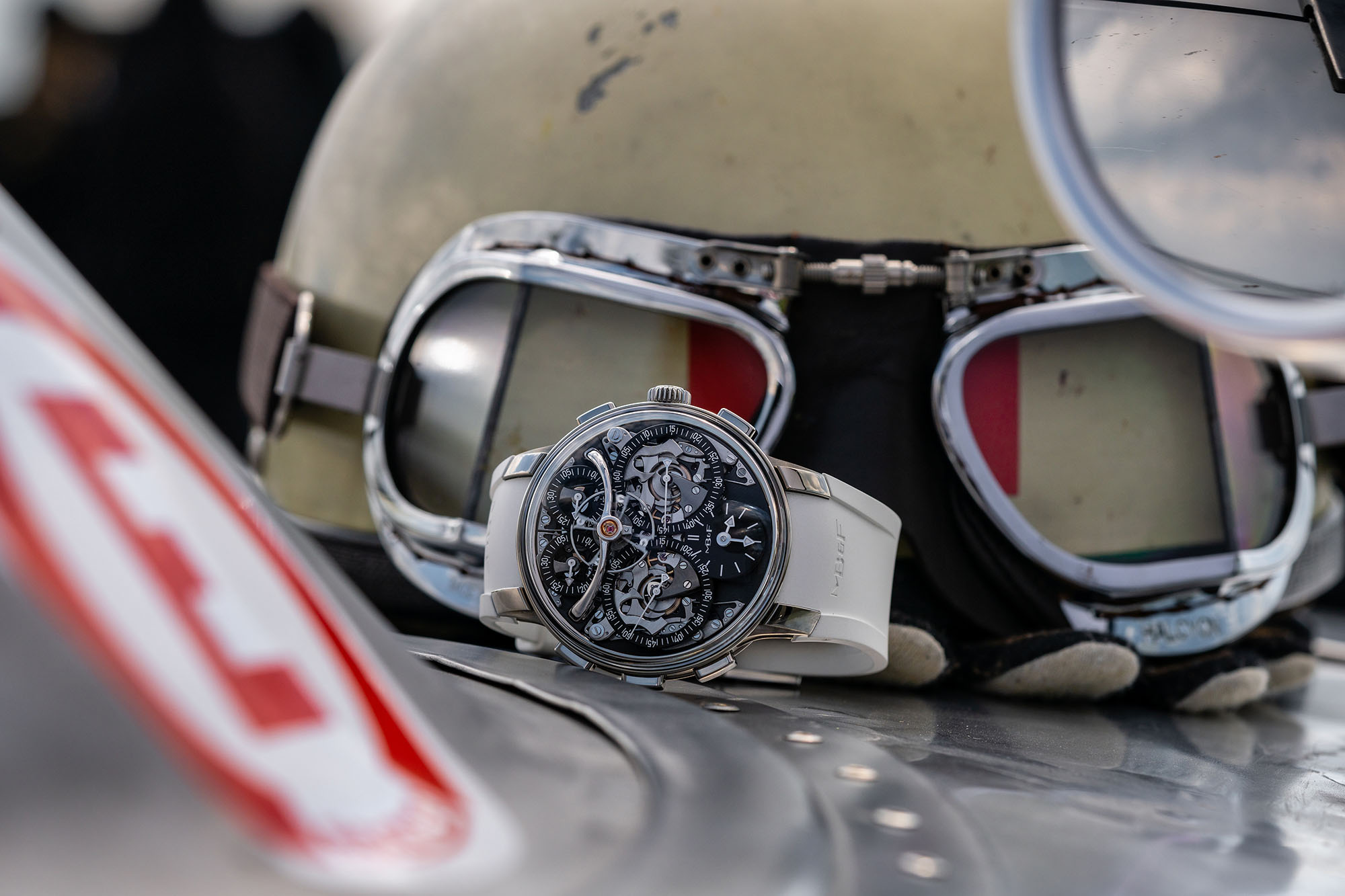 Besides the impressive movement that we’ll get to in a bit, MB&F has created two different versions of the LM Sequential EVO. The first comes with an “atomic orange” dial plate and the second version features a “coal black” dial plate. Both watches come with an integrated rubber strap that complements the technical look of each of them perfectly. Overall, the design looks familiar because it features characteristic elements that we know from the other Legacy Machines, especially the LM Perpetual EVO. But the chronograph layout also feels new and exciting because the technical wizardry brings an array of exciting new functions to the watch. 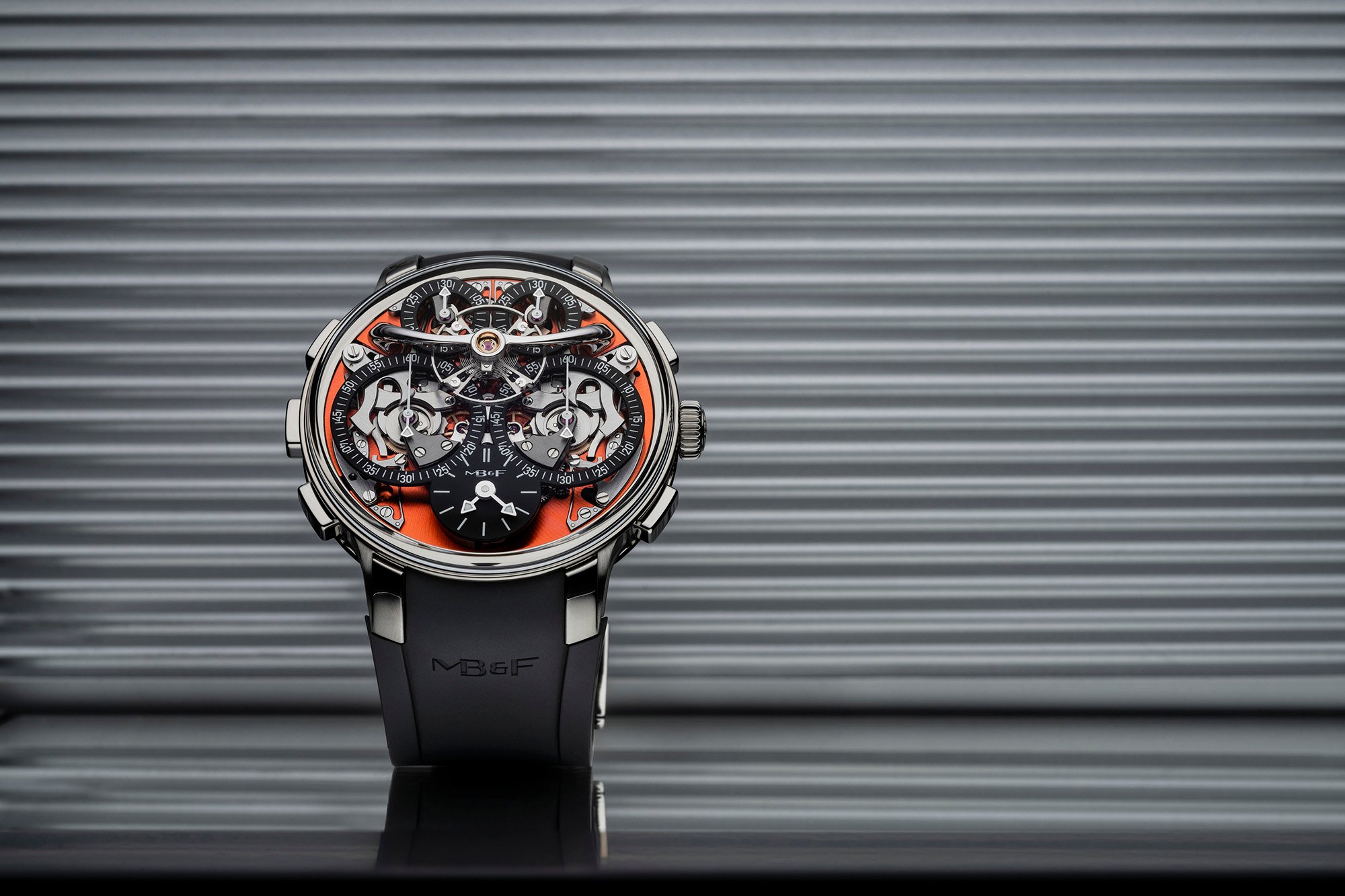 The design of the Legacy Machine Sequential EVO

Let’s work from the outside in. For this watch, MB&F uses a 44mm bezel-less EVO case that’s made of zirconium. This is a metal that is lighter than stainless steel and more durable than titanium. The watch is water-resistant to 80 meters and features a screw-down crown and an integrated rubber strap, as well as a “FlexRing” shock-absorbing system to protect the movement inside the case. The case features the characteristic sapphire crystal dome that we know from other Legacy Machines. It results in a total height of 18.2mm. Underneath the domed sapphire crystal, you will find the dial plate that features two chronograph displays and a time display. The latter is positioned at 6 o’clock and shows the hours and minutes with two arrow-tipped hands. The first chronograph display shows elapsed seconds at 9 o’clock and elapsed minutes at 11 o’clock. 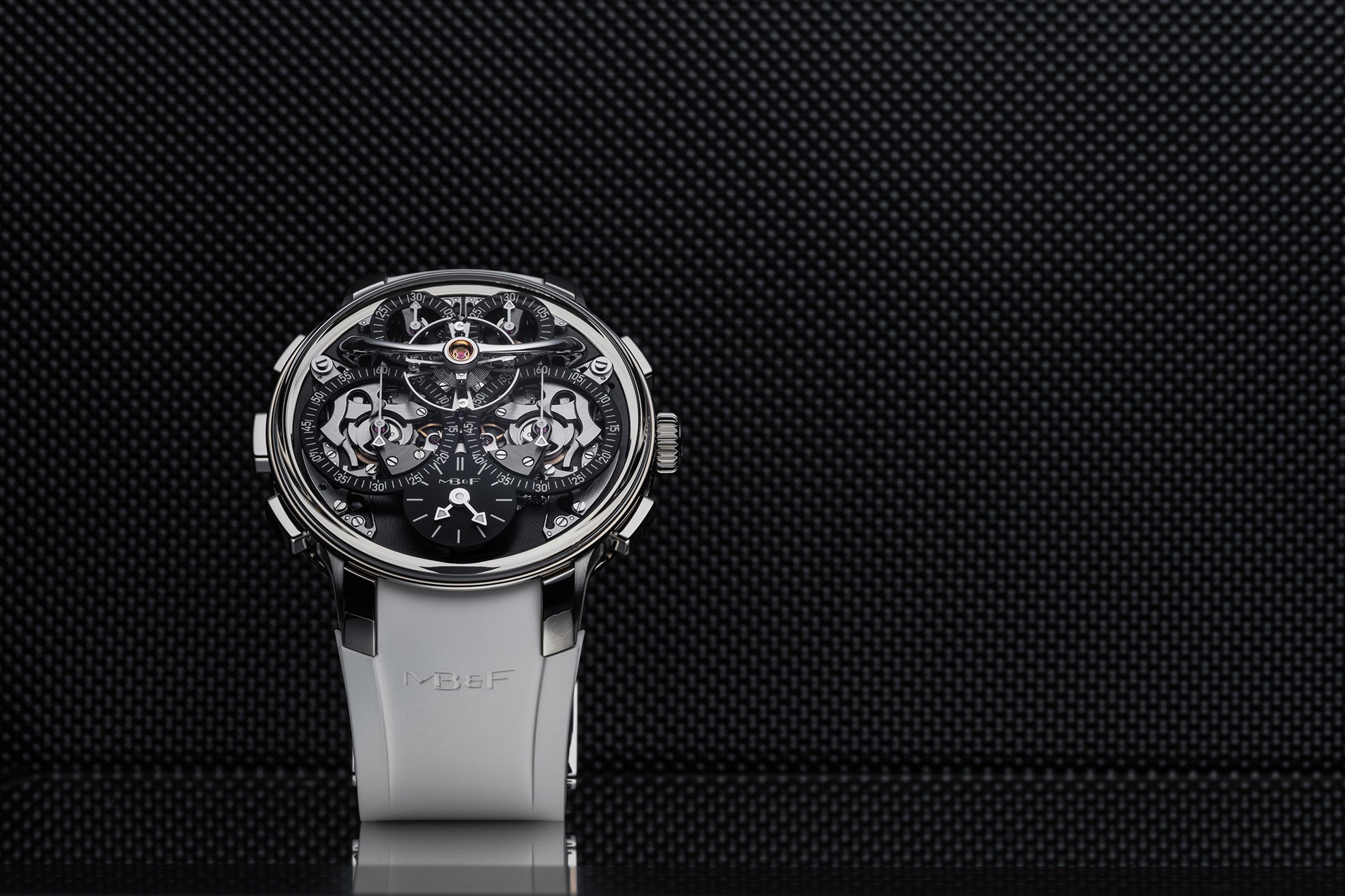 The second chronograph display mirrors this layout, showing elapsed seconds and minutes at 3 o’clock and 1 o’clock, respectively. The user can start, stop, and reset both chronographs independently using the pushers on either side of the case. But as you can see in the images, there is a fifth pusher located at the 9-o’clock position. This is the aforementioned “Twinverter”, and it’s what makes the LM Sequential EVO a truly unique watch. It allows the user to control both chronograph systems, operating as a binary switch that inverts the current start/stop status of each chronograph. This means that if both chronographs are stopped, one click of the pusher will start them both. If both of them are running, the “Twinverter” will stop both. Lastly, if one chronograph is running and the other is stopped, with one click, the running chronograph stops and the other one starts. 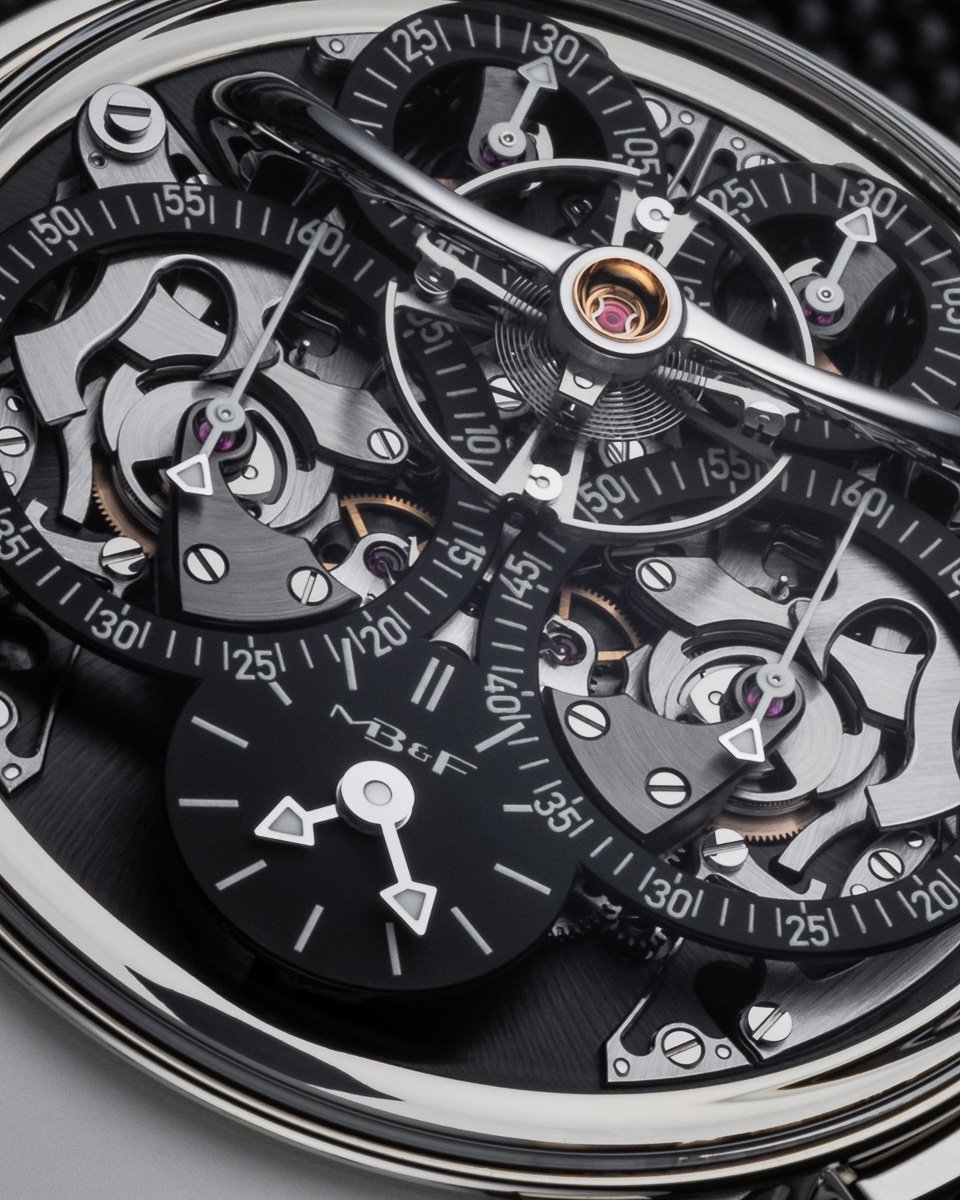 The added functionality of the double chronograph

The utility of the two chronograph mechanisms, however, is not limited to regular chronograph and a split-seconds functions. In fact, MB&F has defined four specific modes that add even more functionality to the watch. The first is the “Independent mode”, which measures the duration of multiple events with separate starting points and endpoints, even when the events overlap in timing. 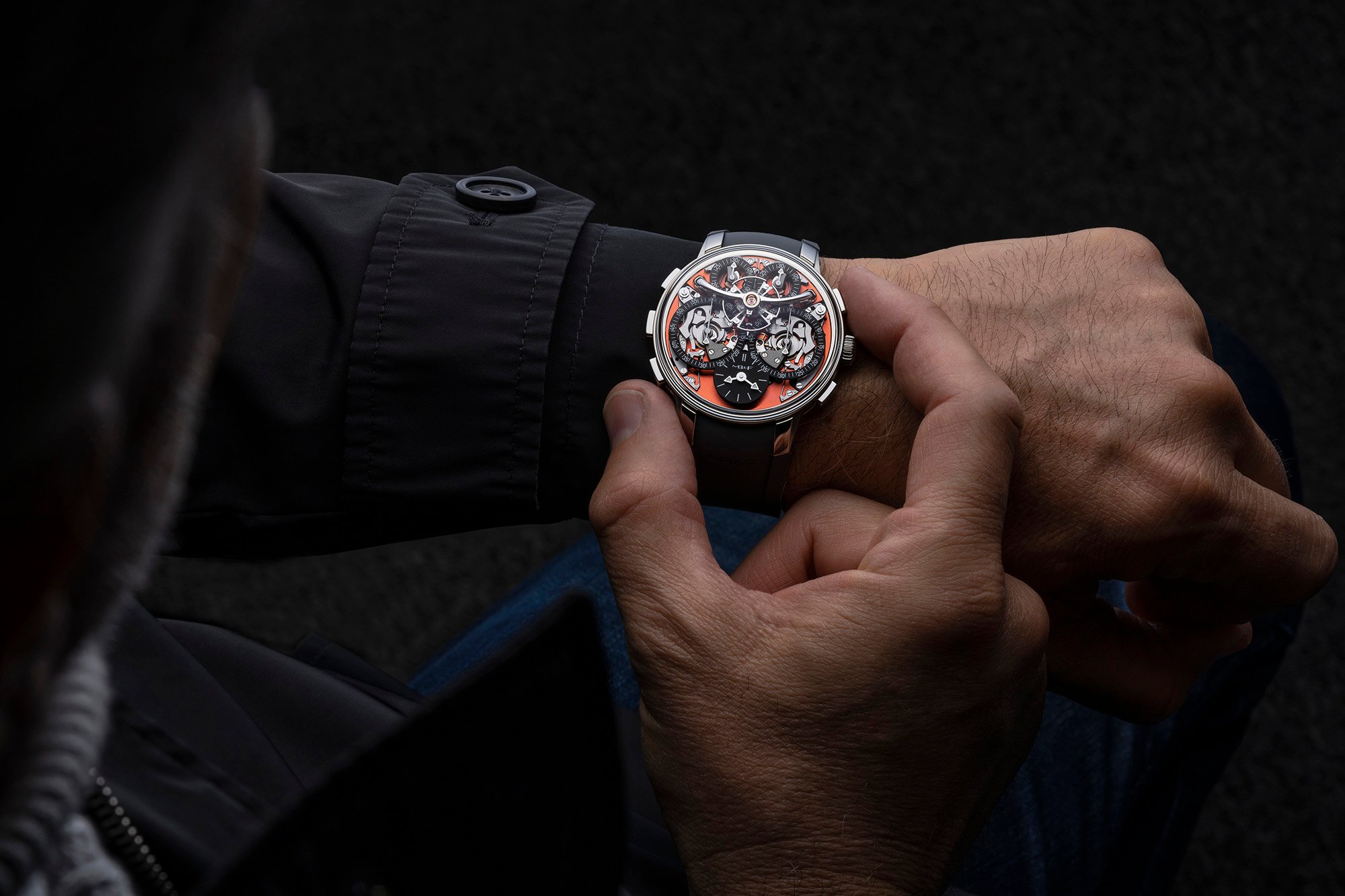 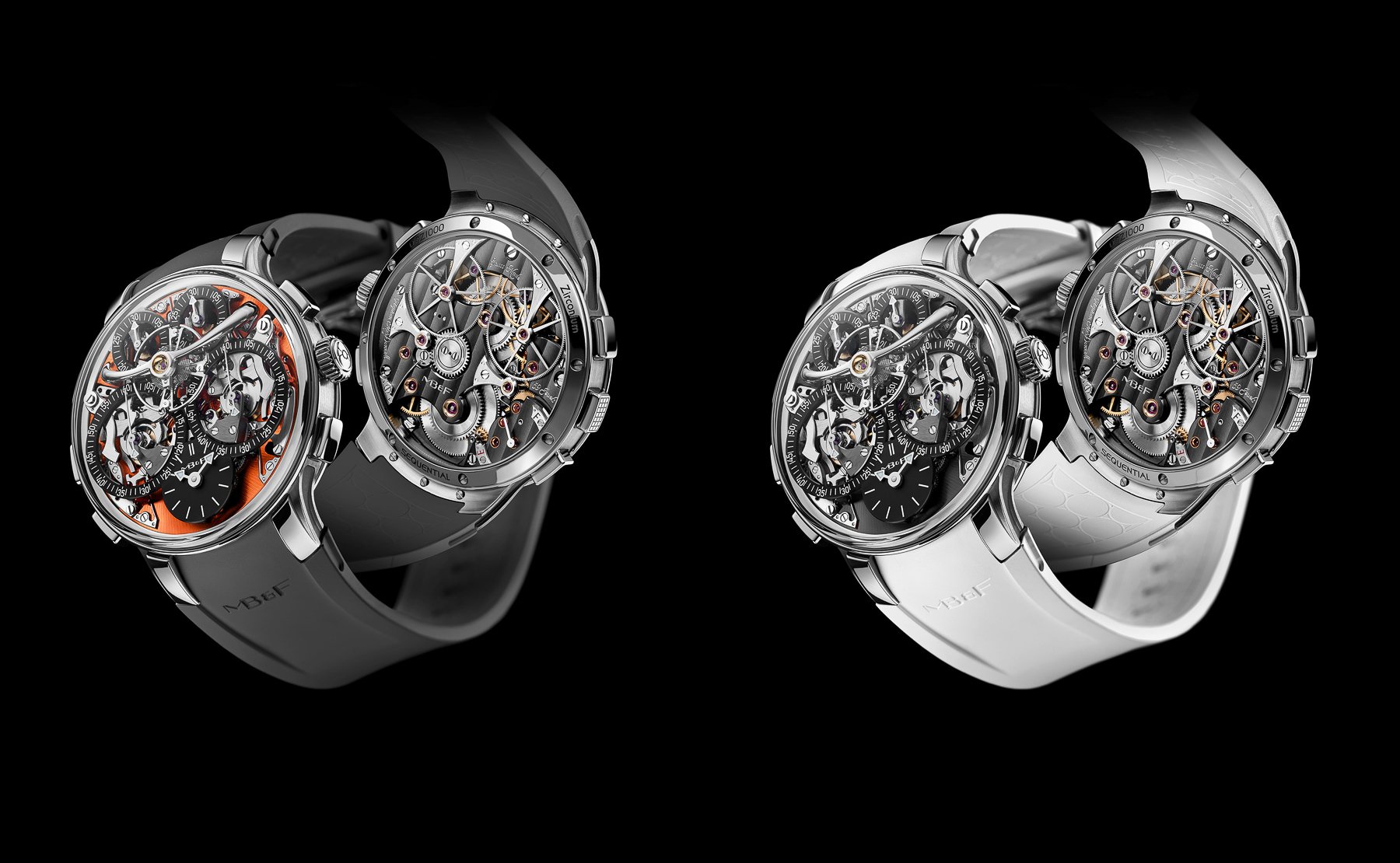 As mentioned previously, the engine that powers the watch is developed by Northern Irish watchmaker Stephen McDonnell. It is a manual-winding movement that consists of 585 components and is visible in all its glory through the sapphire case back. It comes with a double-mainspring resulting in a 72-hour power reserve, and it has a power reserve indicator on the back. The movement also contains 59 jewels and operates at 21,600vph. At the 12 o’clock position on the front, you will find the flying balance wheel with regulating screws. It is one of the visible technical features that we know from the other Legacy Machines. The hand-finishing of the watch is spectacular too. It features internal bevels that are polished to perfection, Geneva waves, hand-made engravings, and darkened bridges. 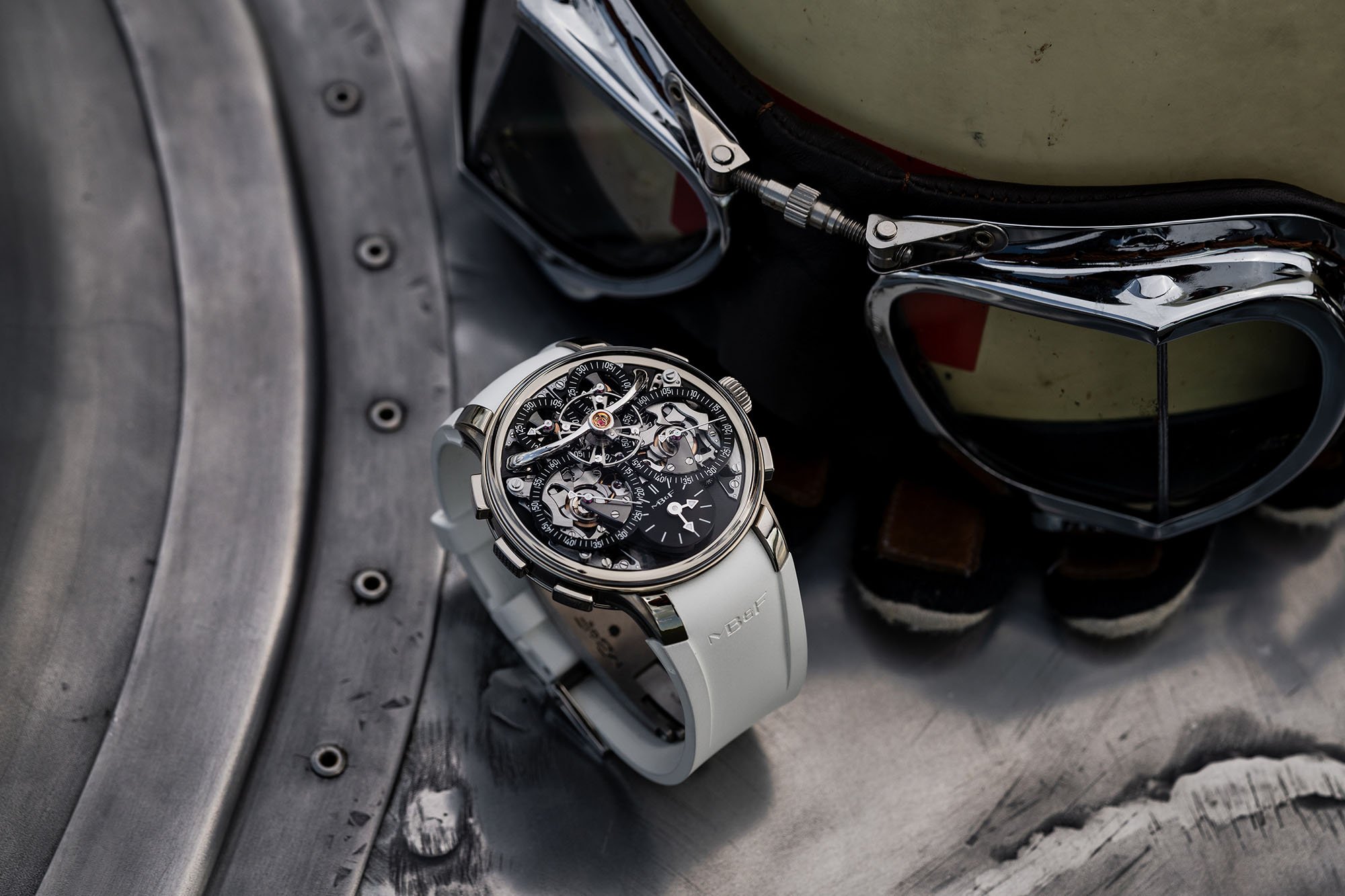 The idea for the movement came about after a conversation between MB&F founder Max Büsser and McDonnell back in 2016. Büsser asked McDonnell what would be a good follow-up to the Legacy Machine Perpetual that the men had collaborated on the year before. McDonnell had been thinking about creating the ideal chronograph. He felt that chronographs were not thoroughly equipped to perform the task that they were designed for — precision timekeeping. For example, in racing sports, lever systems have historically been used to start several individual chronographs simultaneously. In McDonnell’s eyes, however, this is not an ideal system because there are usually small discrepancies between the start of each timer. 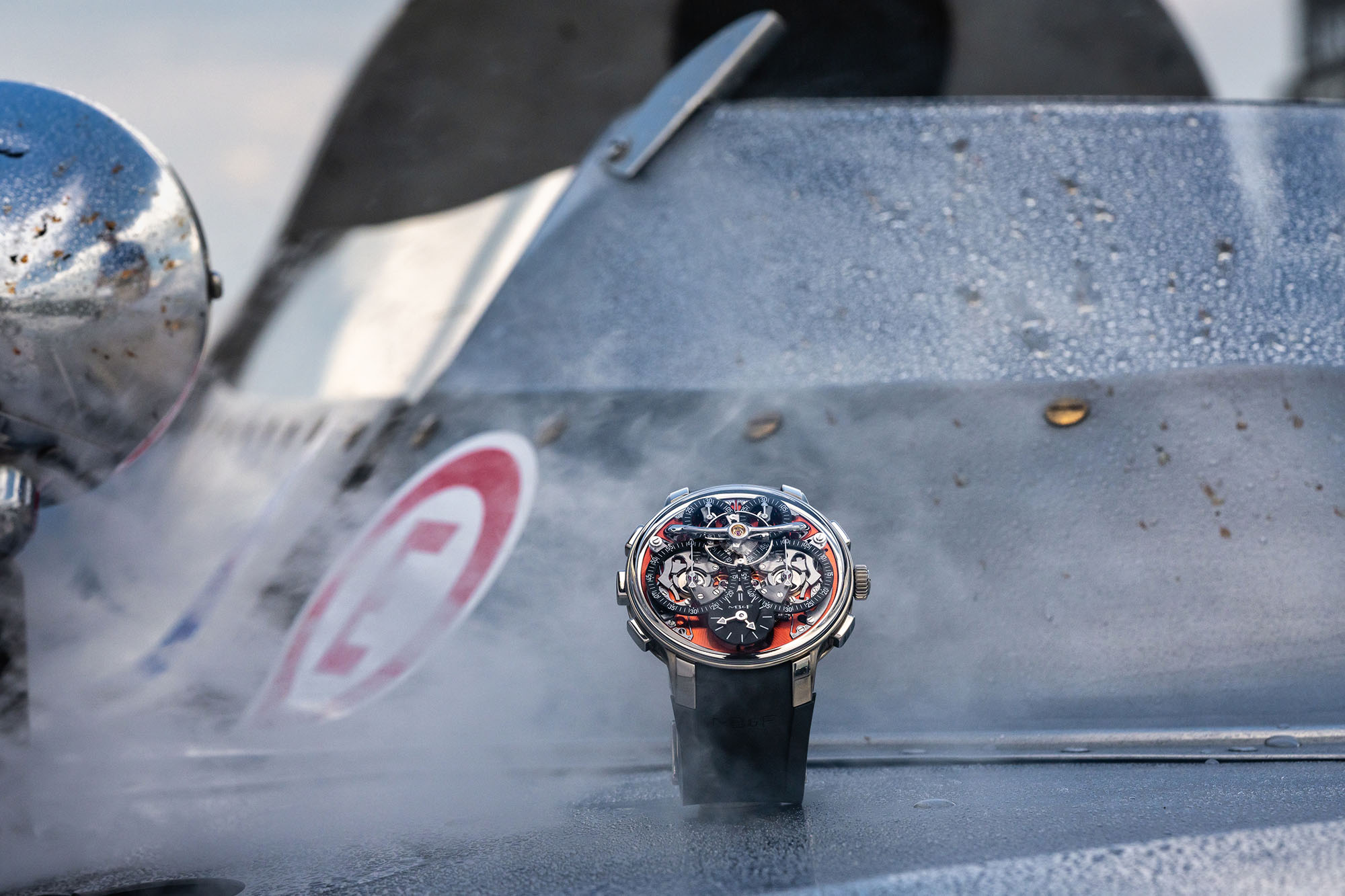 The first step of McDonnell’s solution presented itself quickly in the form of a combined chronograph lever. It would allow multiple chronograph mechanisms contained in one watch to be operated separately. And unlike a traditional split-seconds chronograph, for example, this could allow the user to accurately record split times (sub-durations) of over one minute. With that idea in mind, the plan for the chronograph movement started taking shape. The central idea came to life with two separate chronograph mechanisms linked to the same oscillator. This solution ensures that the small chronometric discrepancies between multiple timing devices would be a thing of the past. 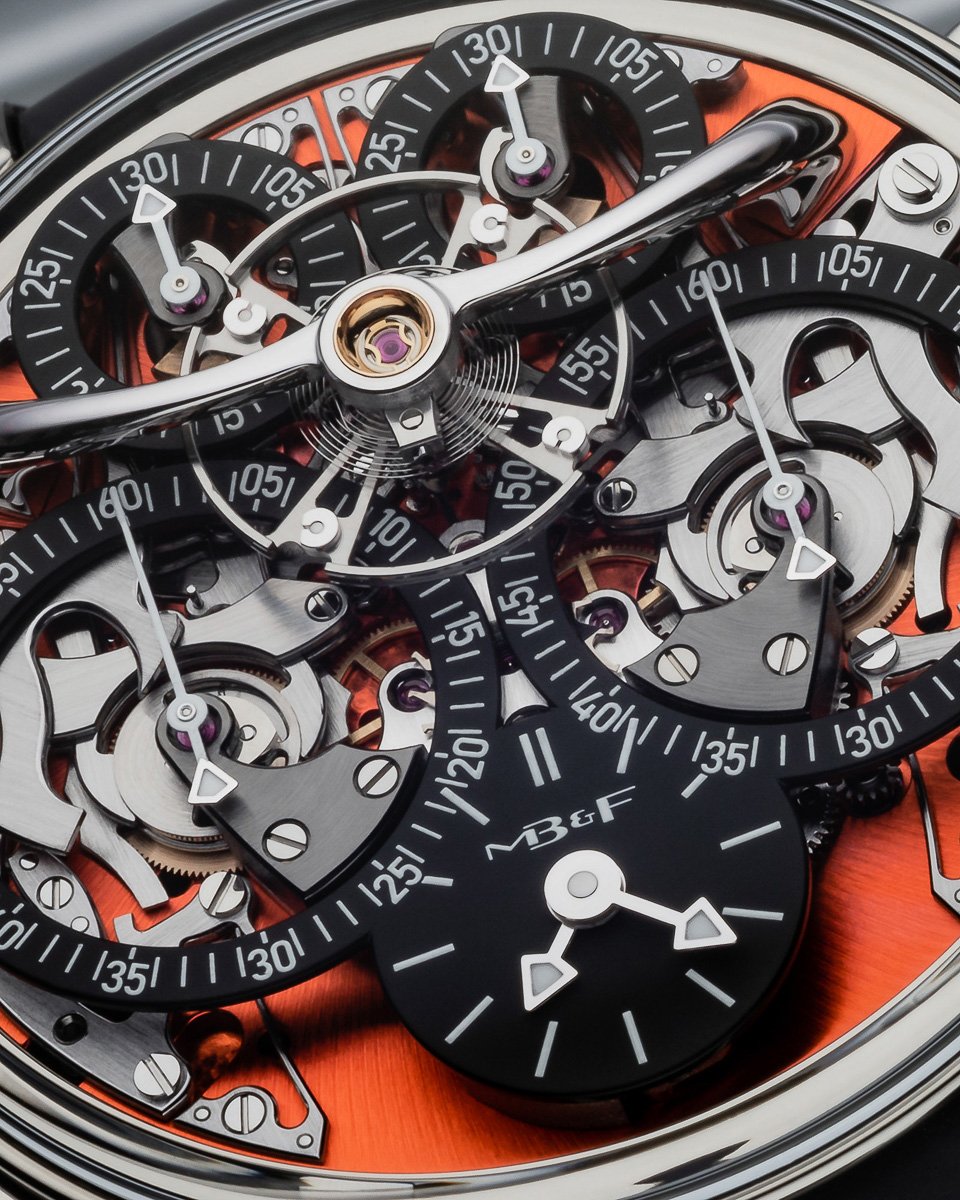 Taking the chronograph into modern times

As another refinement of the chronograph, McDonnell positioned the vertical clutch in the main gear train to eliminate the familiar flutter of the chronograph seconds hand without having to use an amplitude-draining friction spring. Instead, he came up internally jeweled chronograph clutch shafts, which keep the movement’s amplitude stable whether the chronograph is running or not. 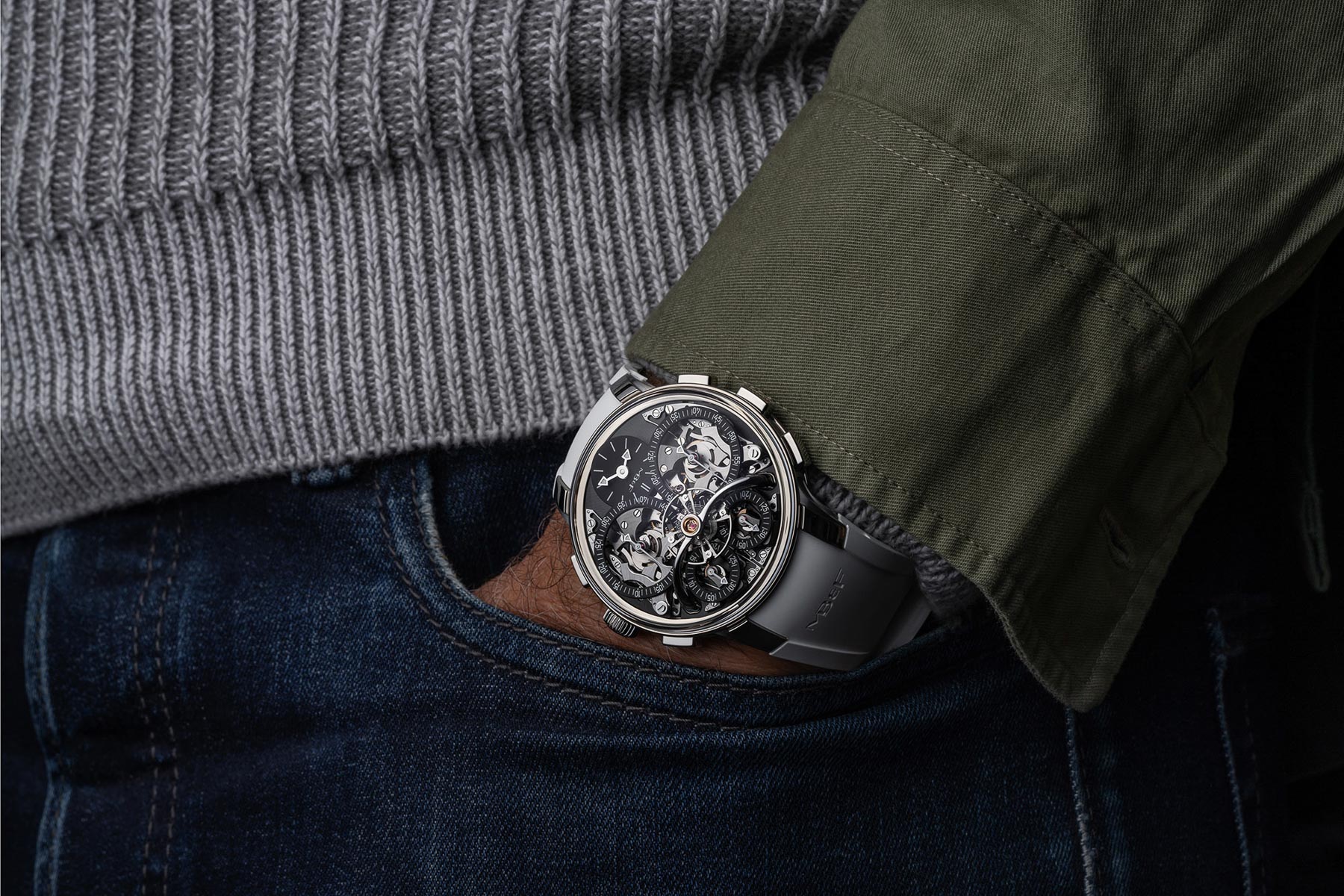 In a final step, McDonnell came up with the “Twinverter” concept. By changing the classic role of the combined starting lever to a toggle switch to change modes, he made the new chronograph a watch that can be used in a variety of modern daily situations. From sports events to work projects and even cooking in the kitchen, the Legacy Machine Sequential EVO is able to help you out in multiple ways. 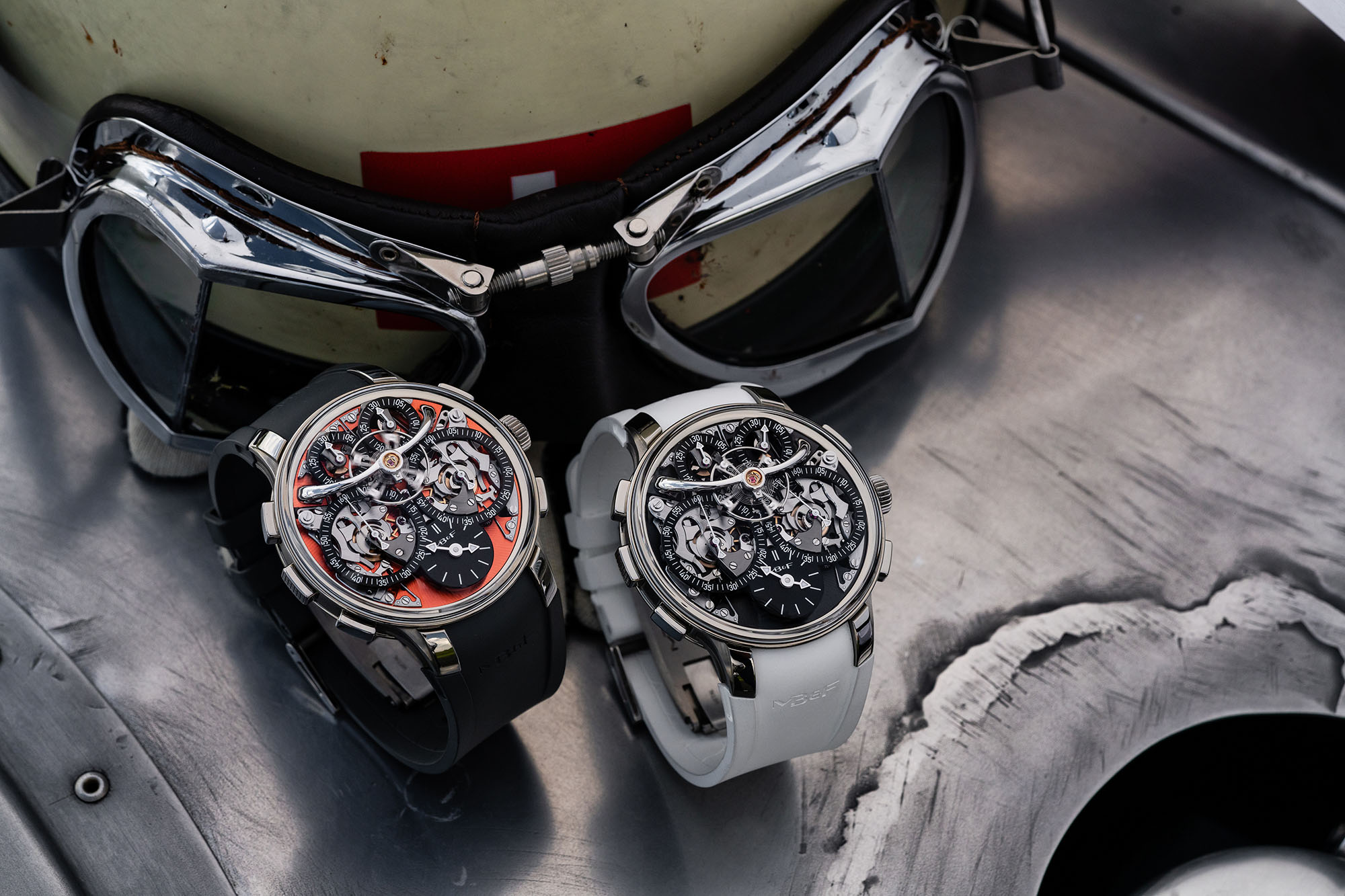 McDonnell’s technical genius combined with the design brilliance of MB&F lead to something spectacular. As you would expect, the results are stellar both technically and visually. That’s where the power of the Legacy Machines lies, so it was obvious that the brand’s chronograph would be the perfect new Legacy Machine. On top of that, it’s the perfect 20th caliber for MB&F. Overall, it’s an epic release that is groundbreaking for the brand and the watch industry alike. As for me, I’m still figuring out all the little details that went into creating this stunning timepiece. 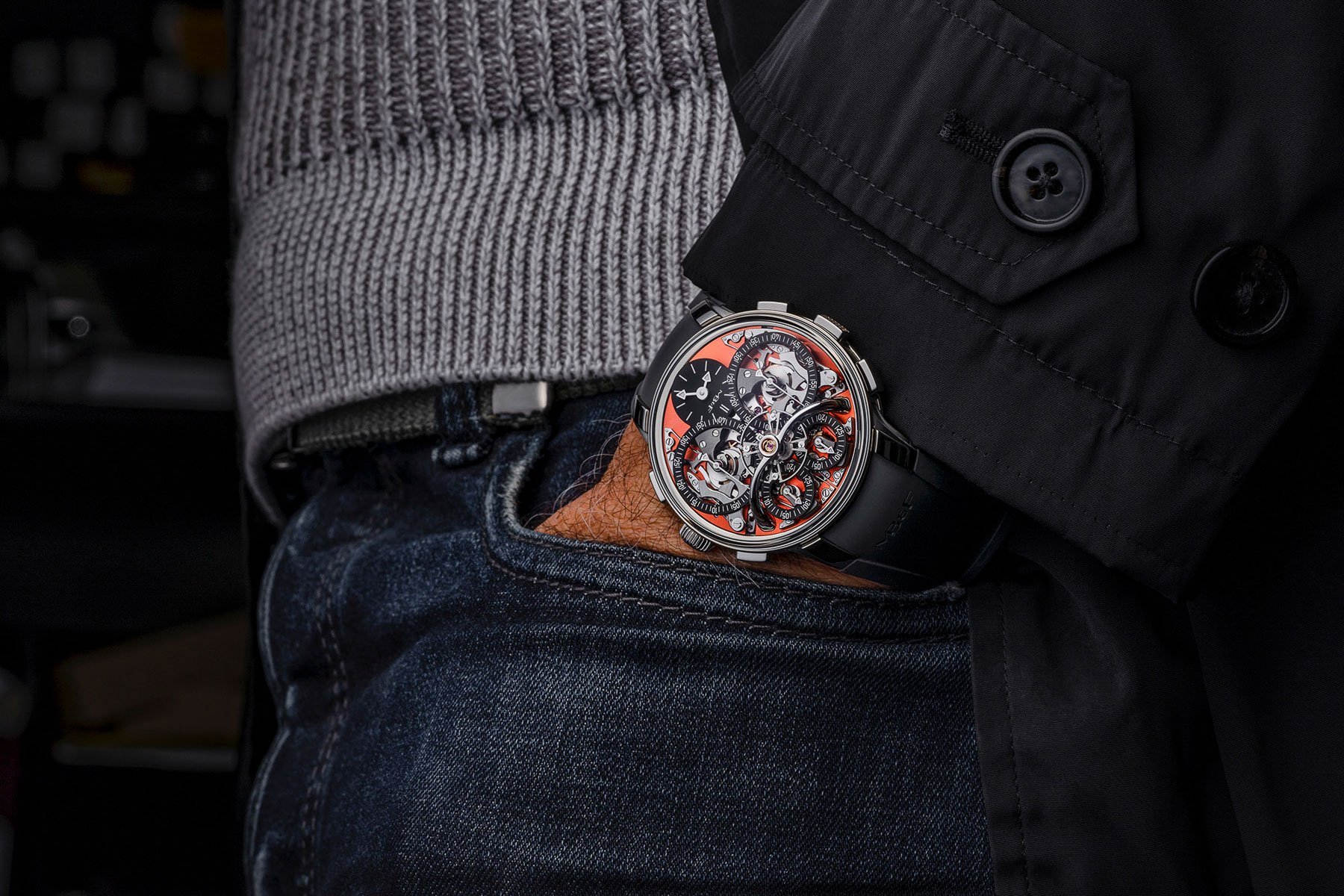 The combination of design, technology, and craftsmanship is absolutely stellar. The zirconium case design with its domed crystal is a spectacular sight, and the integrated strap is a clever design feature. On top of that, the symmetrical chronograph layout is brilliant, and the “Twinverter” concept is a stroke of genius. MB&F and Stephen McDonnell have come up with another masterpiece that redefines the capabilities of the much-beloved chronograph.

These two timepieces will be available for €160,000 before taxes through the MB&F webshop. Yes, that’s obviously a lot of money. As soon as you put this technical mastery in perspective, however, money should not be the topic of conversation. That is how special this new MB&F Legacy Machine Sequential EVO is. Hats off to MB&F and Stephen McDonnell for coming up with this masterpiece.

For more info on MB&F, visit the brand’s official website. Let us know in the comments section what you think of this groundbreaking new MB&F timepiece.