The watch industry has its own superstar designers. The first name that comes to mind for most of us is of course Gérald Genta. You also have a bunch of design studios, like Giugiaro, who has collaborated with a number of watch brands (Seiko Astron GPS for example). However, there are a handful of names in industrial design whose heritage is so vast it spans from aircrafts to chairs, trains to cameras, motorbikes and of course watches. Roger Tallon, creator of the LIP Mach 2000, is one of these designers. Born in 1929 in France, Tallon witnessed and actively participated in the revolution of industrial design. After getting his engineer degree at 21 Tallon worked for companies like Caterpillar and DuPont. Later he joined Technés where he became director in 1959 at age 30. Through-out his career Roger Tallon worked for many big names like, Peugeot, General Electric and Matra. He designed the world famous French super train; the TGV. 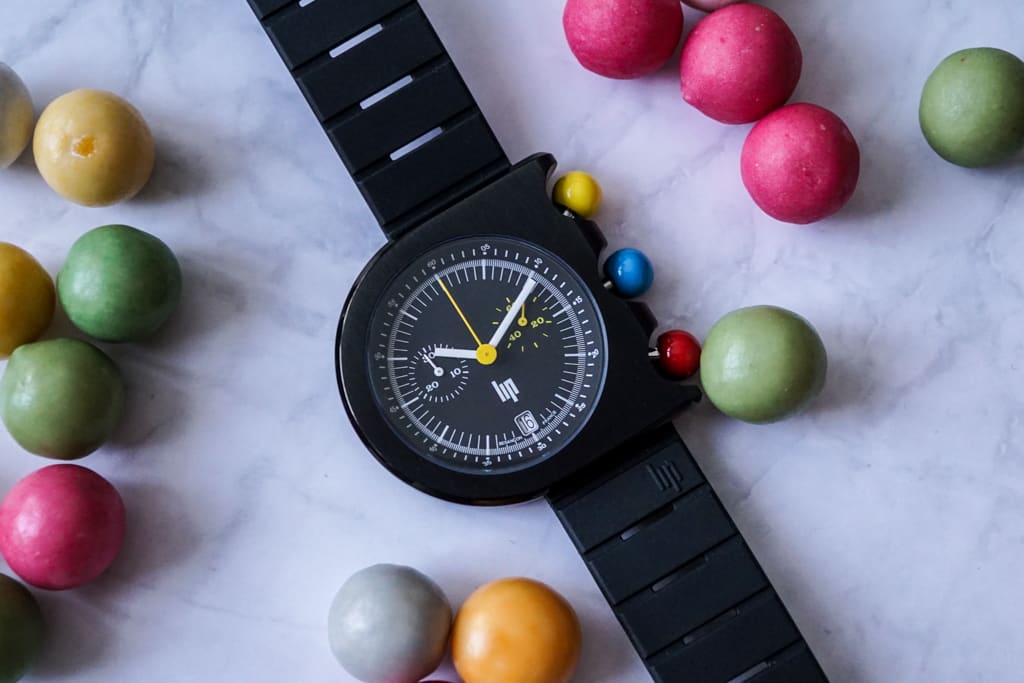 His brilliance is clearly shown by his projects but this one article is not enough to list all of them. So let’s jump to 1973 when French watch manufacturer LIP joined forces with Tallon and his team. LIP was (as a matter of fact still is) a brand that took pride in being a French company. It was very important to LIP to have the manufacture in the county and work with French designers when they could. Roger Tallon was top of his craft during the early 1970’s and the work he did for LIP cemented his name in the history books of watch design, whether some like it or not. The watch industry was already at its decline during the mid-1970’s and needed a shake-up. That could’ve been one of the reasons Tallon chose a design that was pretty unorthodox. 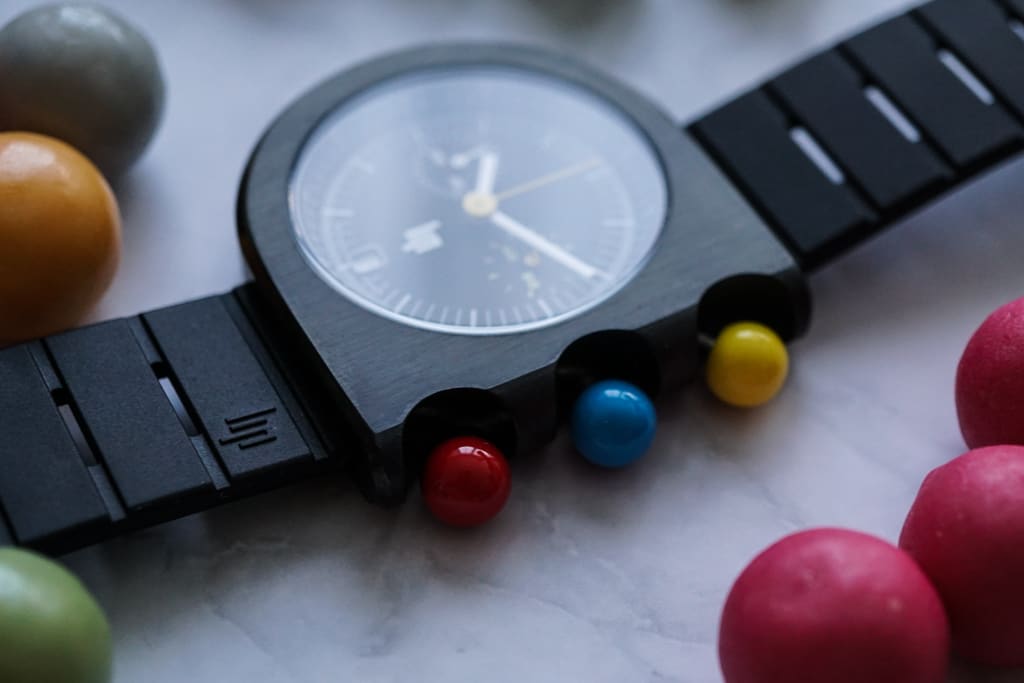 The LIP Mach 2000 models blur the line between serious watches and fun, toy-like gadgets. The black case color is a classic, subtle base. Paired up with the asymmetric shape and the colorful, vivid tones on the hands, pushers and crown reminds us of bubble gums. The clean design is visible throughout the whole watch. The black dial with the LIP logo or the date at 6 o’clock, are all in line with this design code. The LIP Mach 2000 is very easy to recognize when worn. You immediately identify the pushers but also the abstract case shape. If you don’t know what it is, it might seems funny, childish even but to the real connoisseurs who understand design principles it shows something else. It is an edgy design but that makes it “work” on so many levels. 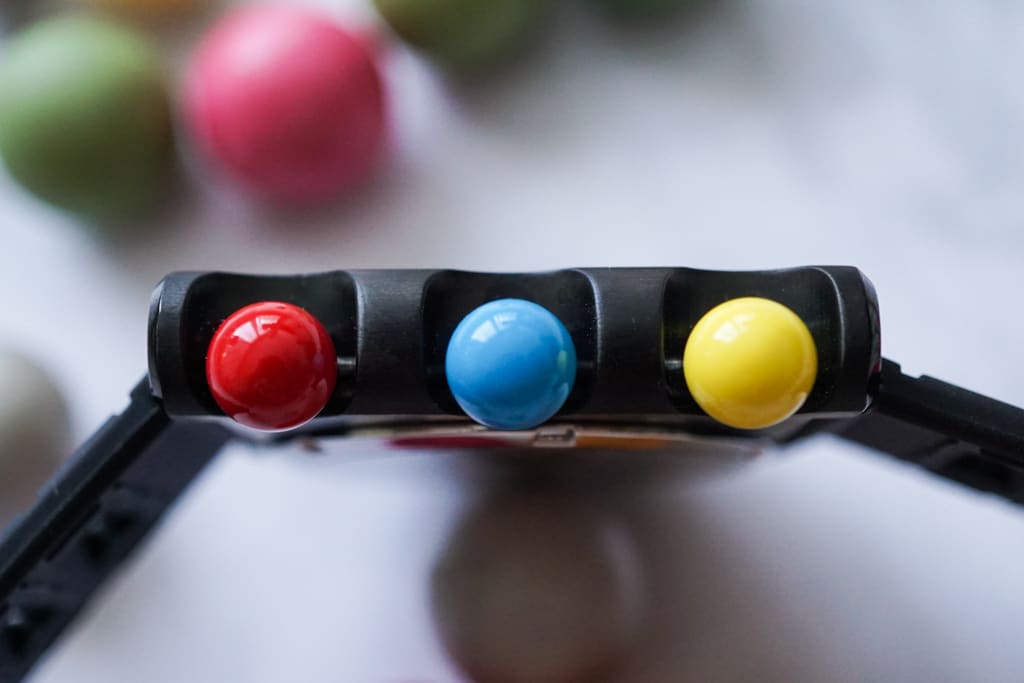 LIP is still, or I should say again, in business. Not only that, they also sell re-editions of some of their most iconic watches, one of these being the Mach 2000. The only downside is that unlike the originals, these now have a quartz movement. The 1970’s Mach 2000 chronograph was a mechanical model. Inside you could find a manual-wind Valjoux 7734. The 7734 is a sturdy and reliable movement, a huge favorite of the era. For cost effectiveness the new LIP Mach 2000 chronographs have an analog-quartz Ronda 5021-D movement. It is a 5-Jewel (Swiss made) battery operated movement with chronograph and date functions. It’s perfect for the job and offers the same features as the original caliber. LIP is proud that their watches are made in France. 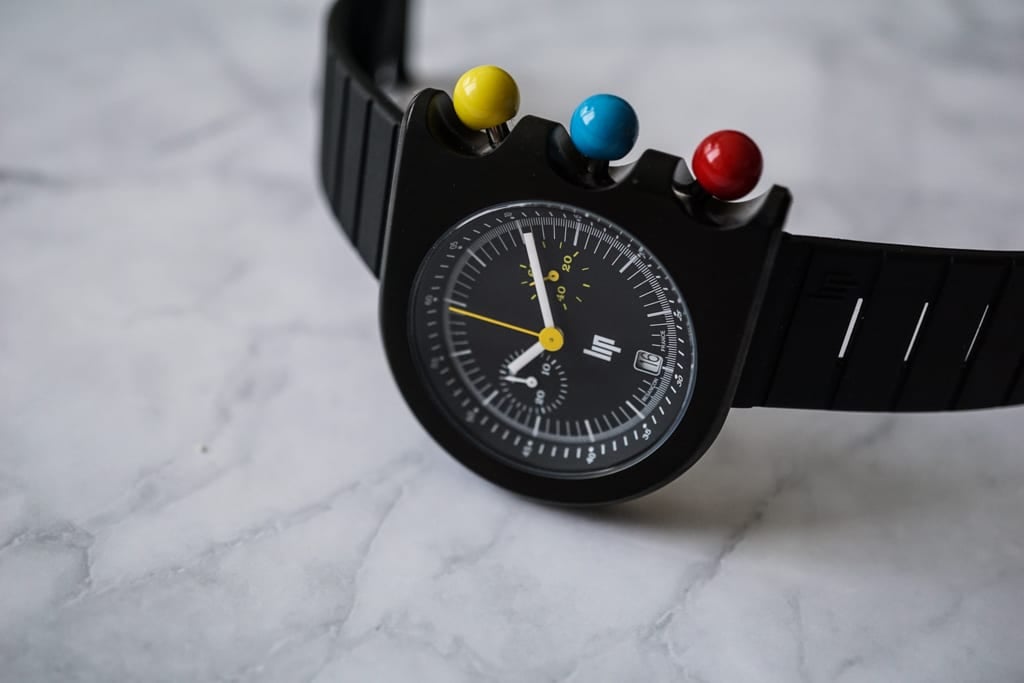 Of course the main thing about these timepieces is not the movement but the design. While I never had a vintage Mach 2000 in my hands to compare the two, as far as I understand, the new ones are nearly identical to the vintage models. The look is definitely the same, the shape of the case, the color scheme even the case back. Size-wise it is also very similar, maybe a couple of millimeters different than its vintage counterpart. If you look at the watch from a consumer’s standpoint, the Mach 2000 is such a easy to operate piece. Due to the black dial and large white stick hands it is super easy to read the time on it. The large pushers help you to operate the chronographs easily and the colors distinguish the different functions. Something we saw from Hanhart a few decades earlier for example. 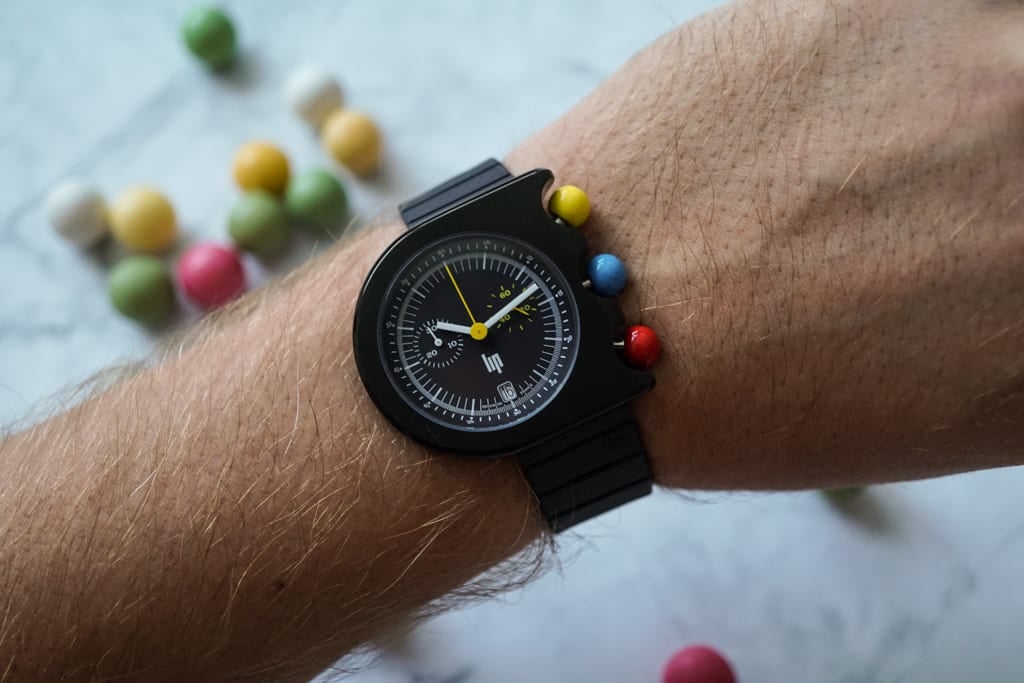 The case is brushed black steel and the strap (at least on mine) is black rubber, though it feels a bit like plastic I must say. The strap is also a remake of the vintage rubber with the embossed LIP logo and singed black buckle. You can buy the Mach 2000 in four versions; black case with rubber, leather or black mesh Milanese strap or brushed steel case with the steel Milanese. The crystal is made of mineral glass and the water resistance is 50m. The watch comes with a standard 2-year warranty from LIP in a cool round box that looks like a big ball. The Mach 2000 is a budget design watch with a price tag of €449 + shipping. This is the price of all four types of this model. 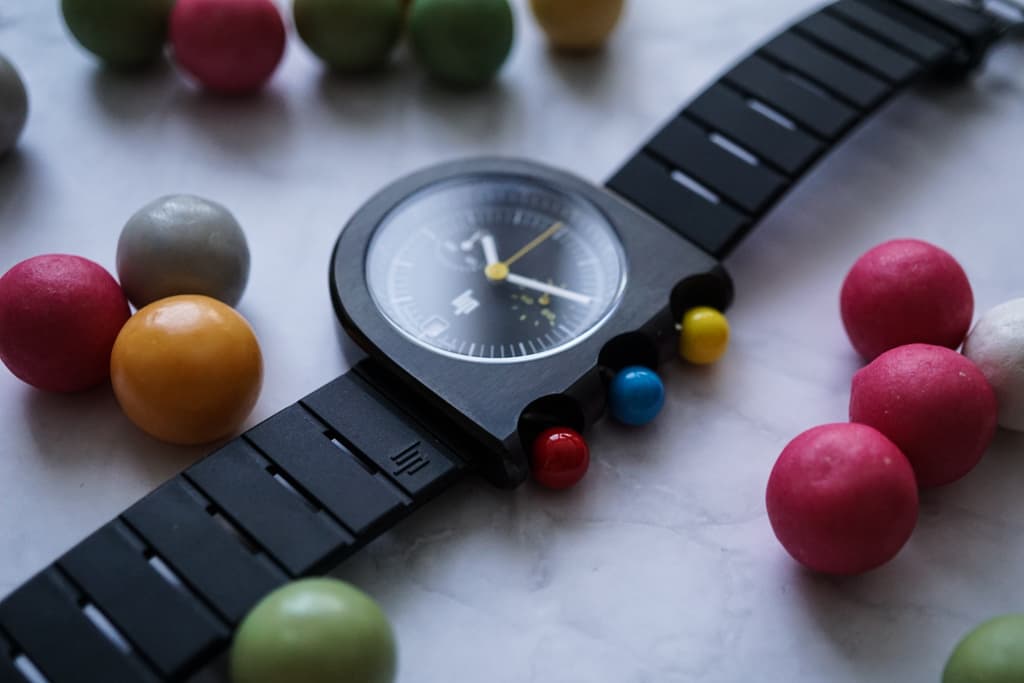 While the LIP Mach 2000 chronograph was the flagship of the brand back then it was definitely not the only model in the line. Time-only (Mach 2000 Classic), ladies (Mach 2000 Mini), square-cased (Mach 2000 Mini Square) even digital watches came out under the Mach 2000 family. Other than the digital, all the aforementioned models are available today. All of these models can be seen on LIP’s website. The LIP Mach 2000 is not only a design icon it is also a great looking watch, a true conversation starter. Not an expensive piece by any means but this is part of the fun and it’s success. It strikes a chord with people looking for an inexpensive watch, design lovers as well as the true watch enthusiasts and the younger generation. For a 40+ year’s old design this quite an achievement.

You can visit the website of LIP by clicking here.