Longines Conquest Heritage 1954-2014 – A Tribute To The Original

Longines seems to be spot on with the Heritage models that they are introducing. We recently did a comparison review between the original Longines Flagship Heritage and an original Longines Flagship (you can read it here), but it seems that Longines is taking the release of the Conquest Heritage a step further and makes it a real tribute by even using the 35mm case size of the original version. That’s right, 35mm. It is quite daring even, for a watch brand to release a men’s watch in 35mm these days. 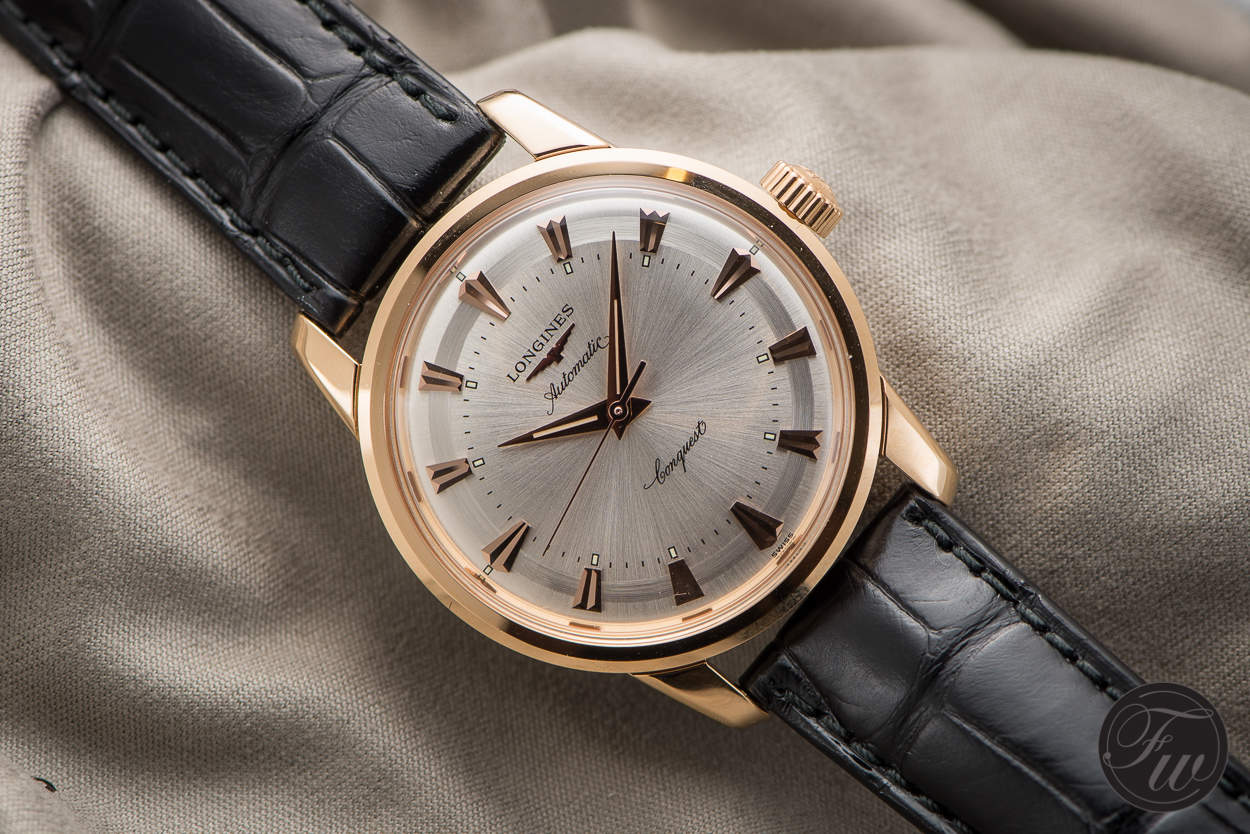 Although we appreciate the efforts of a lot of watch brands to create something retro, to use ingredients of watches from the past to create something new, to target the audience that likes the appeal of vintage watches but with an up-to-date appearance, we have to admit that most of these well-meant initiatives just fail. The new models are too big, have the wrong wording and / or wrong typography, have dials that never existed and so on. Still good watches perhaps, but have little to do with the original timepiece they are referring to. Longines plays this quite right. Their Legend Diver model is one of these perfect examples (click here). This Conquest Heritage is perhaps an even better example on how it should be done.

We’ve found it super interesting to see that Longines decided to create these watches in 35mm, for the absolute purists of vintage timepieces a very welcome decision by the brand from St-Imier. Also, if you look at the dial, you will immediately see that – whichever version you select – you could easily been mistaken by thinking it is the original version from the 1950s. These original pieces from the 1950s had rich (gold) dials, beautiful applied gold hour markers, sun-ray effects and stunning dauphin shaped hands.

In an upcoming article on Fratellowatches on gold watches from the past that we already prepared before Baselworld took place, there are a few photos of historical interesting timepieces that also includes a Longines Conquest. As you can see below, the dial of the watches in those days were simply mesmerizing. 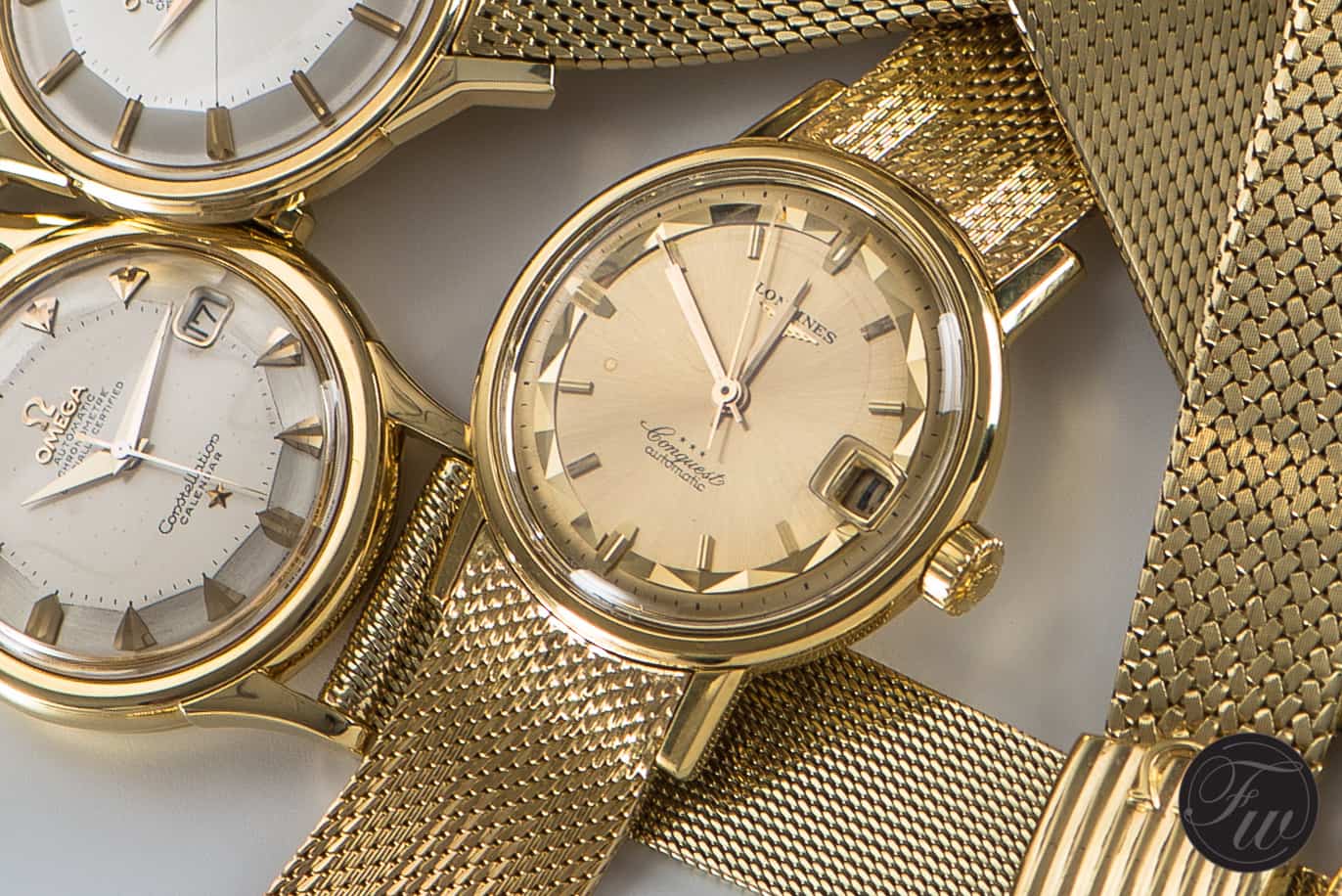 The photo shows how little concessions were made when designing and finishing the dials on these watches. It is also interesting to see that the Conquest was a direct competitor of Omega’s Constellation and showed similarities in terms of style and finish. These days, these watches are quite far apart and have little to do with each-other anymore.

As you will see on the photo below, Longines could easily have you tricked by the new Conquest Heritage 1954-2014 tribute models. Although there were several different models in the past and the one we show above is not exactly the model that Longines based their new Conquest (Heritage) on, it does show similarities in terms of style and how well they studied their own brand’s heritage. We almost would go as far in saying that Longines sets a new standard in creating retro watches, but perhaps that statement would be too bold. But at least it demonstrates how we feel regarding these new timepieces. 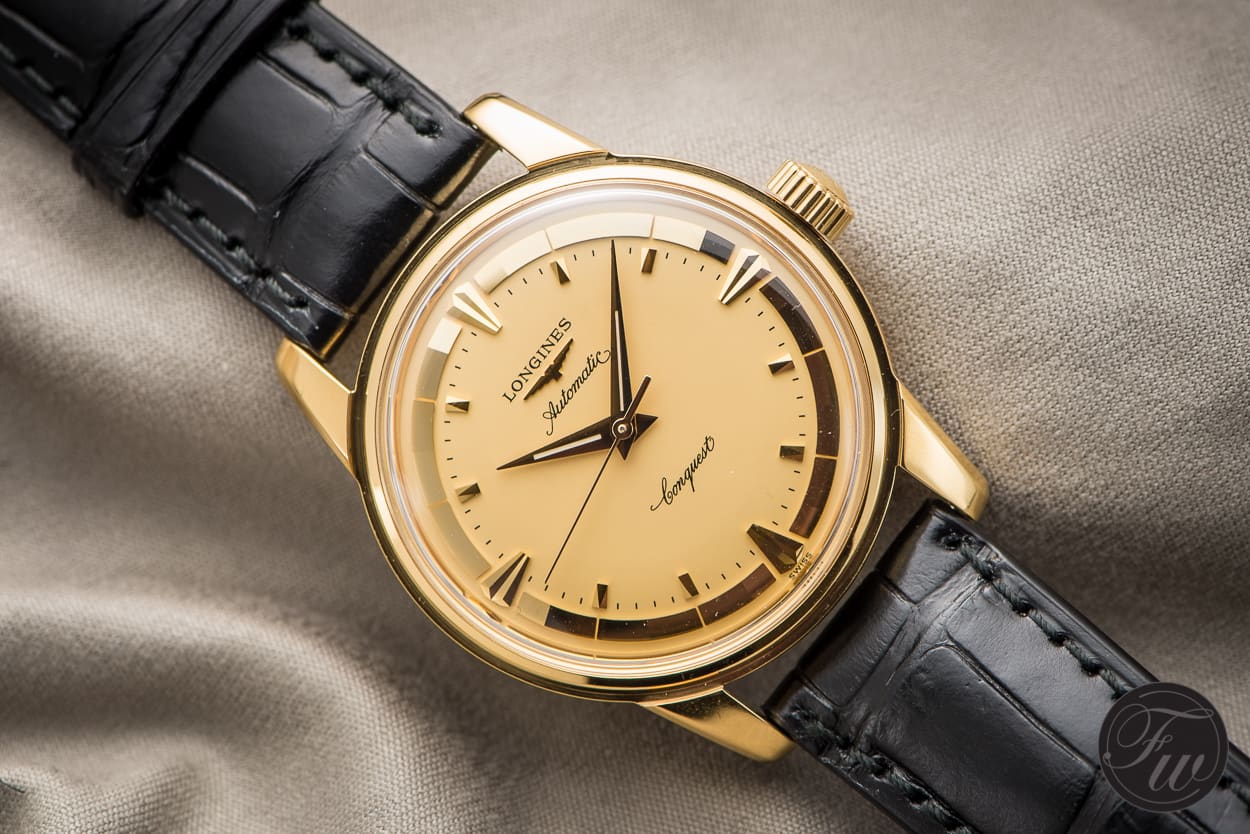 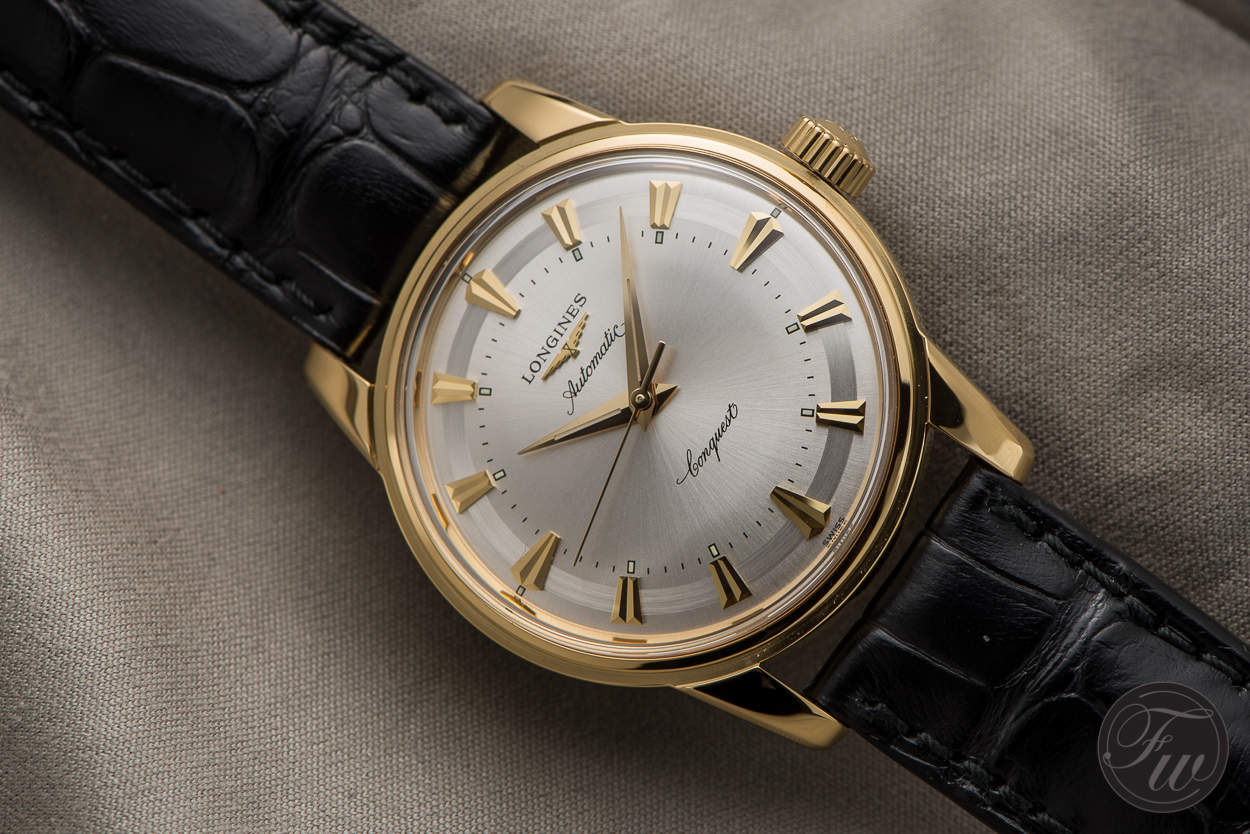 Not only the dial, hands, case shape and case size are important when re-creating an existing blast from the past, it is also about the case back. As you know, the Flagship and Conquest models bore a beautiful enamel emblem on the case backs. The Flagship Heritage had one as well, and so do these new Conquest Heritage models. Below, a photo of one of the three gold models with the enamel emblem that carries the famous ‘wave and stars’. The model name is engraved as well as the individual number of the limited edition. More on that later. 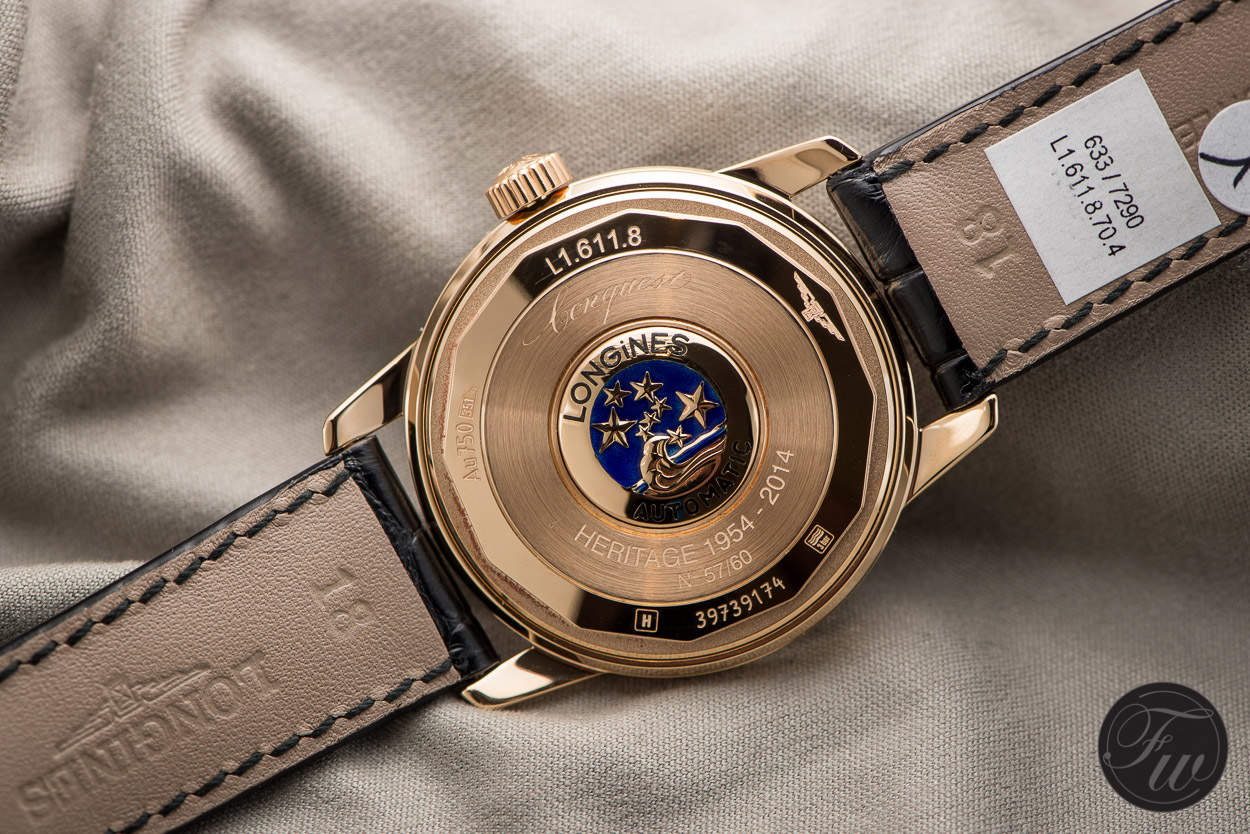 Below a few examples of vintage gold and stainless steel models that belong to a Longines collector. We are not sure whether these watches have undergone some restoration treatments regarding the case back and enamel art, but the Longines wording (spelled as LONGiNES) and enamel medallion are very similar to the ones on the new limited edition Longines Conquest Heritage models. 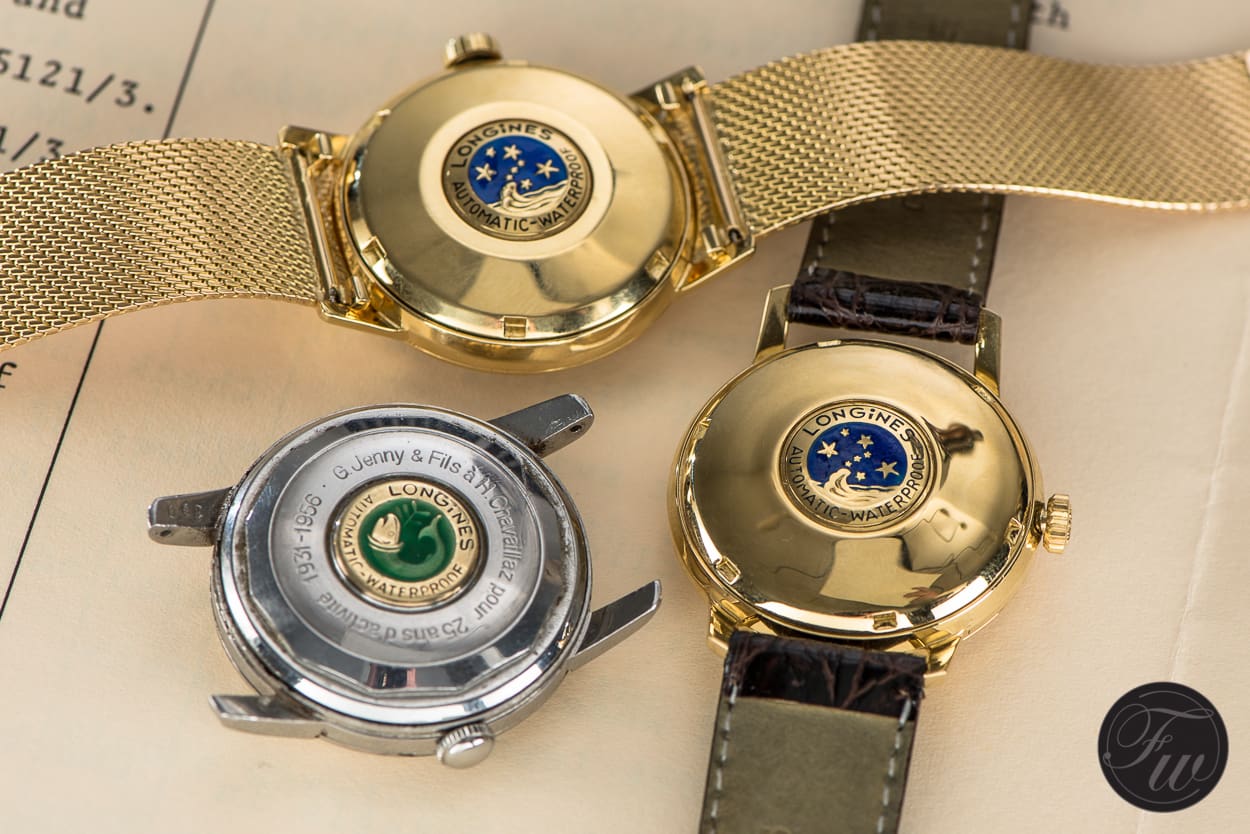 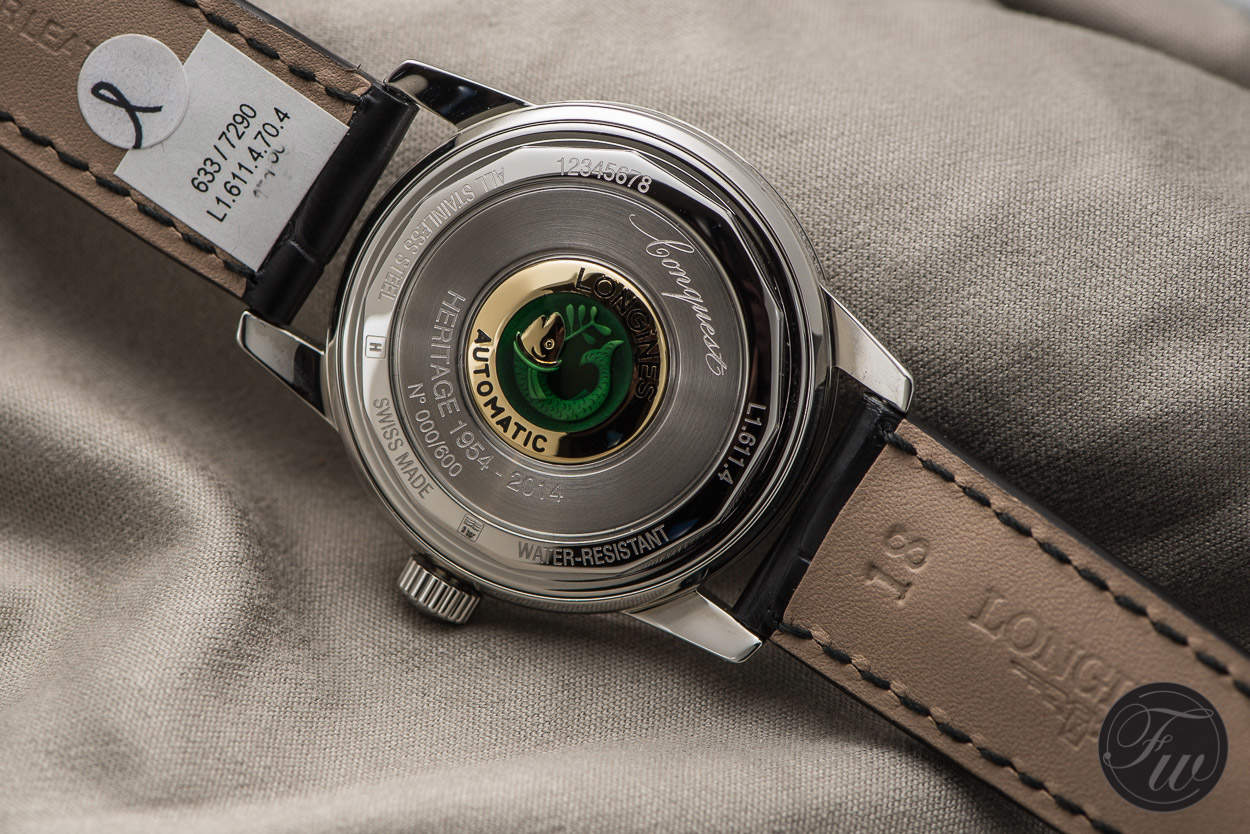 Underneath the emblems it becomes a bit different though compared to the original Conquest watches. These watches used the in-house manufactured caliber 290/291 and the early models used the in-house caliber ASD19 movements where the new Conquest Heritage watches uses the Longines L633 movements. These movements are based on the sturdy ETA 2824/2, which is a strong performer. Purists might rather have seen Longines using a few old stock caliber 29x movements in the Conquest Heritage models, or perhaps only in the three different gold versions (60 pieces each) but our assumption is that these movements are long gone and that it would make this watch probably unaffordable. 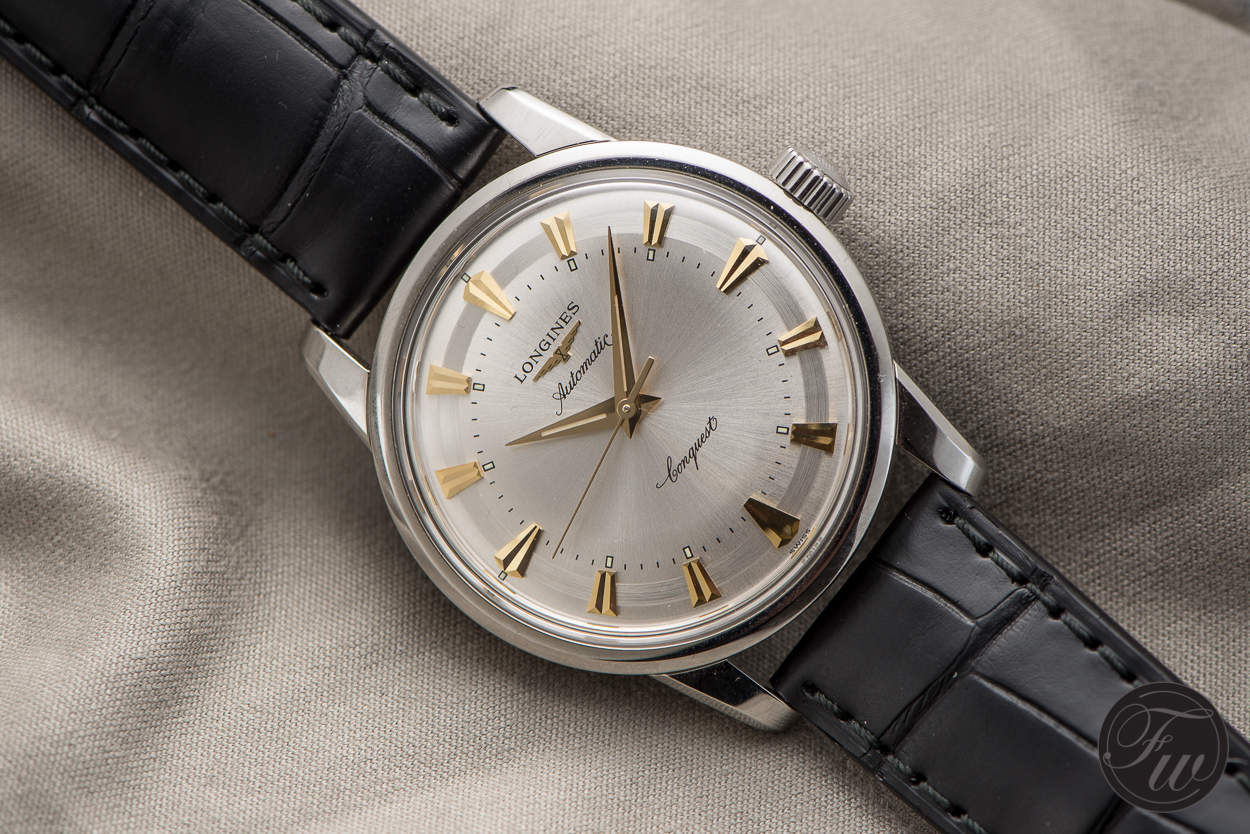 In a nut shell, the four different models have the following reference numbers and pricing:

In the end, we do wonder who is going to buy a Longines Conquest Heritage. Perhaps we will bet on the same customer who is aiming for the Flagship Heritage. In the write-up we did on that watch we thought that it might be a great watch for someone who loves the look & feel of a vintage looking piece but wants to have a modern update. However, as said, the Conquest Heritage is even closer to its forefather than the Flagship Heritage in our opinion. Perhaps the guy who’s father or grandfather had a Longines Conquest in the 1950s or 1960s wants to have a watch that comes really close but doesn’t want to burn his fingers when purchasing a real vintage one. The world of vintage watches can be a tricky one, especially for watches that are high in demand or much sought-after. A nice Longines Conquest in either stainless steel or in gold from the 1950s is not easy to find in an all original condition and without the risk that it has been tampered with. This buying process is especially difficult and hard to see-through when you are not a watch nut. We can also see the Longines Conquest Heritage to be the ‘crown’ on a Longines Conquest collector. For the guy that already has a bunch of them in his collection, it might be interesting to add the all-new limited edition model as well.

In any case, we love the new 35mm Longines Conquest Heritage and have a soft spot for the yellow gold version with the gilded dial.

More on Longines can be found here. Interested in becoming part of the (vintage) Longines community? Visit this Longines forum.