I like big clocks and I cannot lie. The French antique comtoise clock hanging in my parent’s house, for instance. But also the highly decorated table clock my grandmother left me and that has found a place in the bookshelf. And if I had the budget for it – and the matching design house on the coast but that is a different matter – I would give the Jaeger-LeCoultre Atmos in Marc Newson design a prominent spot. And since the Ulysse Nardin UFO table clock landed on my Fratello desk, I also put it on my imaginary list. Another great thing: I felt like Indiana Jones when I uncrated the UFO.

The Ulysse Nardin UFO table clock (Ref. 9023-900LE-3A-BLUE) is spectacular in every way. Even the box it comes in is quite something. It’s a wooden crate – a bit more luxurious than that term suggests – with leather handles that has a sort of old cargo ship vibe. Very much like those wooden crates you see in the last shot of the first Indiana Jones movie, “Raiders of the lost Ark”. The Ark of the Covenant is put in one of those crates and put in a humongous warehouse in Area 51 where it will gather dust for all eternity. Anyway, when you open the wooden box Ulysse Nardin shipped to The Hague, the glass dome covering the clock shows itself – maybe not as monumentally biblical as discovering the Ark, but still a pretty special moment. 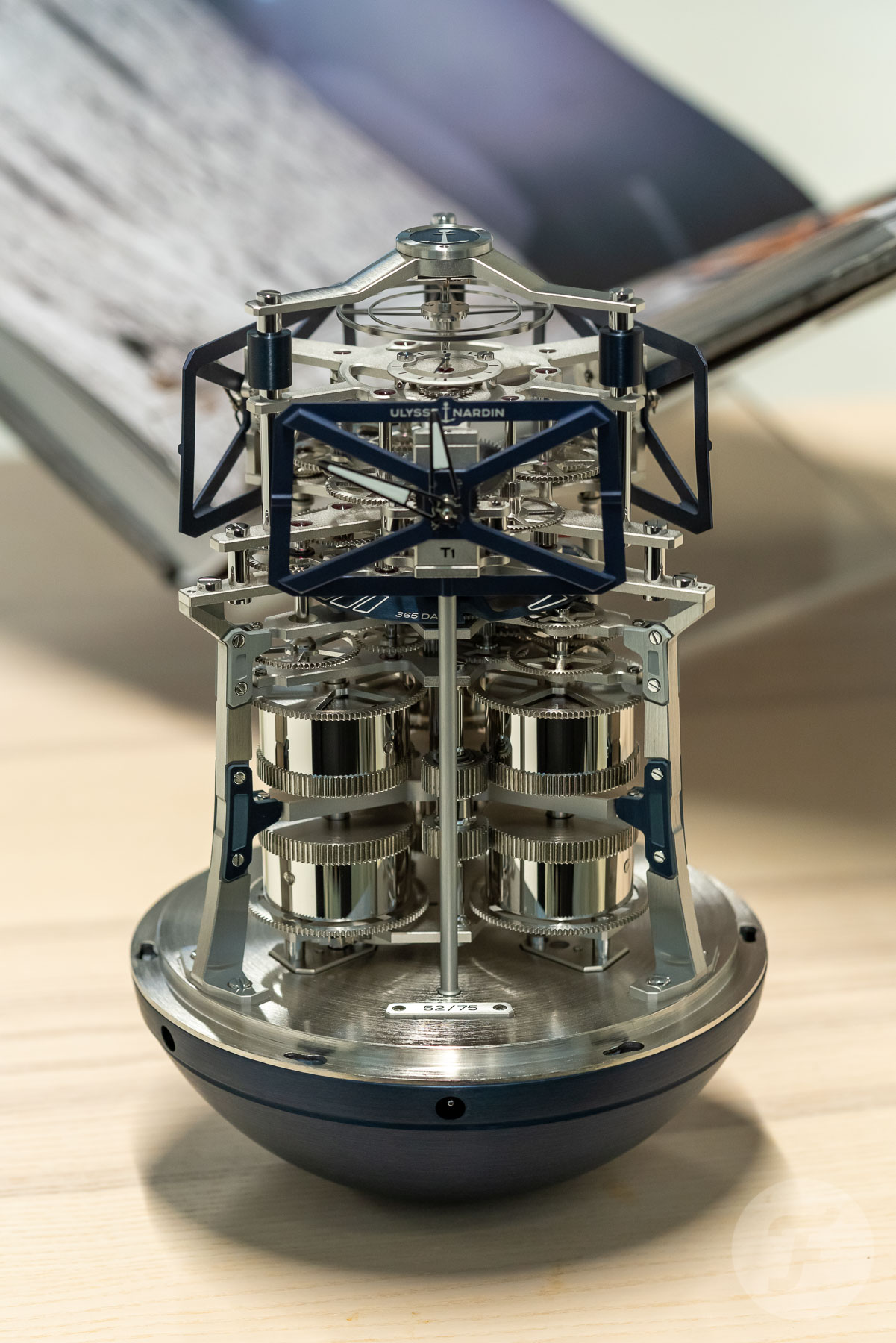 To the spectacular clock itself now. Once uncrated and placed on the desk, a sense of “wow” certainly hits. Especially since I’m so used to opening boxes and finding really petite objects with tiny movements. The Ulysse Nardin UFO table clock is anything but tiny and petite. It’s a tall, 26.3cm “pill” with a diameter of 15.9cm and the inner workings are completely exposed. And it’s not a stable clock, no, it wobbles. Why? It’s a nod to the history of Ulysse Nardin from Le Locle. 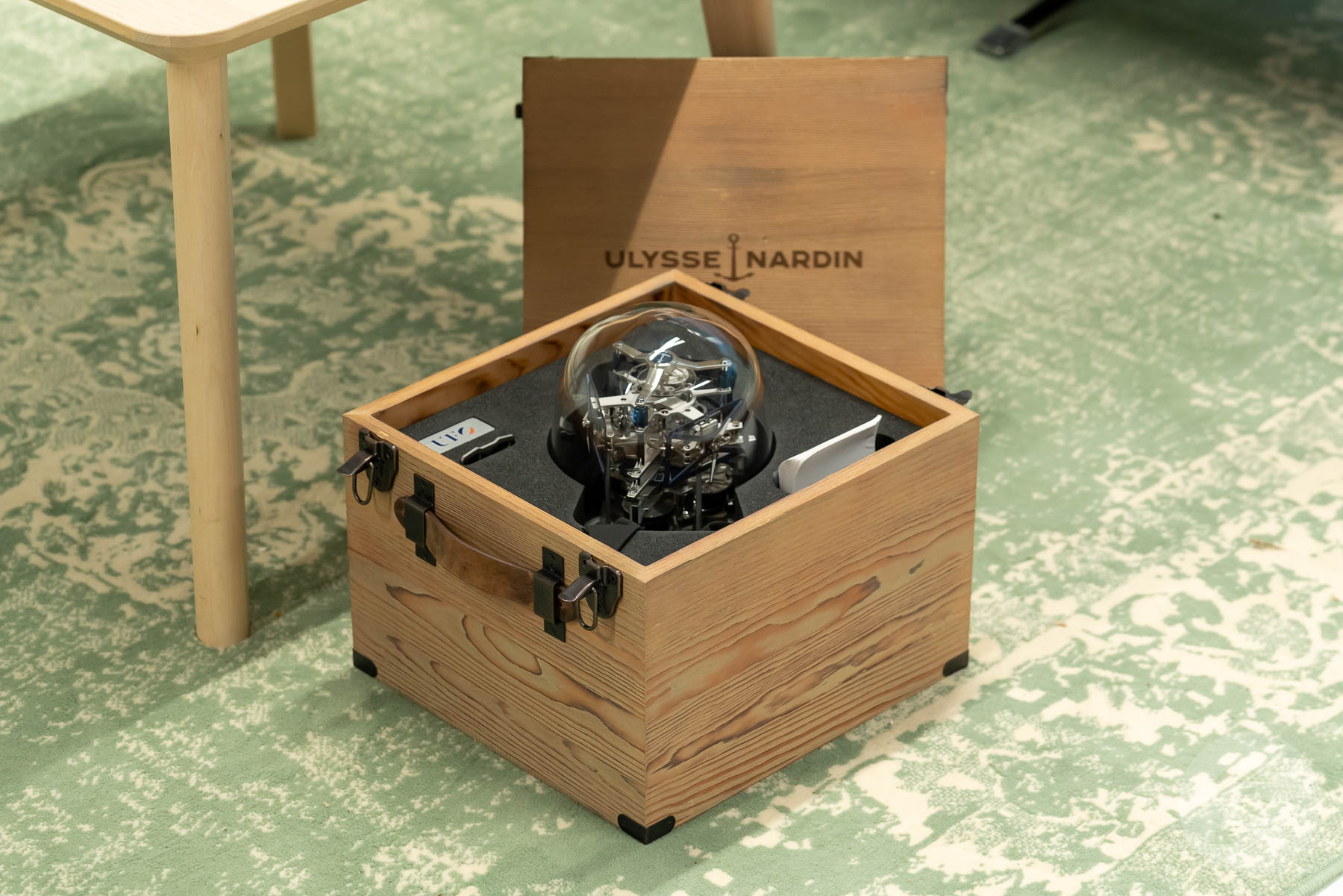 As you might know, Ulysse Nardin made a name for itself in the early 20th century for its marine chronometers. The UFO doesn’t sail the seven seas, but pays homage to marine chronometers that were set on gimbles to counteract the effect of the ship’s motions at sea.

… a rounded bottom that, because it’s a very heavy bottom, acts as a counterweight.

The UFO, that celebrates that brand’s 175th anniversary, does something completely opposite: it mimics the movement of the sea. It has a rounded bottom that, because it’s a very heavy bottom, acts as a counterweight. The 7.2kg UFO will sway and swing when you push it, but won’t fall over. The UFO will swing up to 60° from its axis, and that is quite a sight when it does. The chances of getting seasick by watching the clock have not been tested. 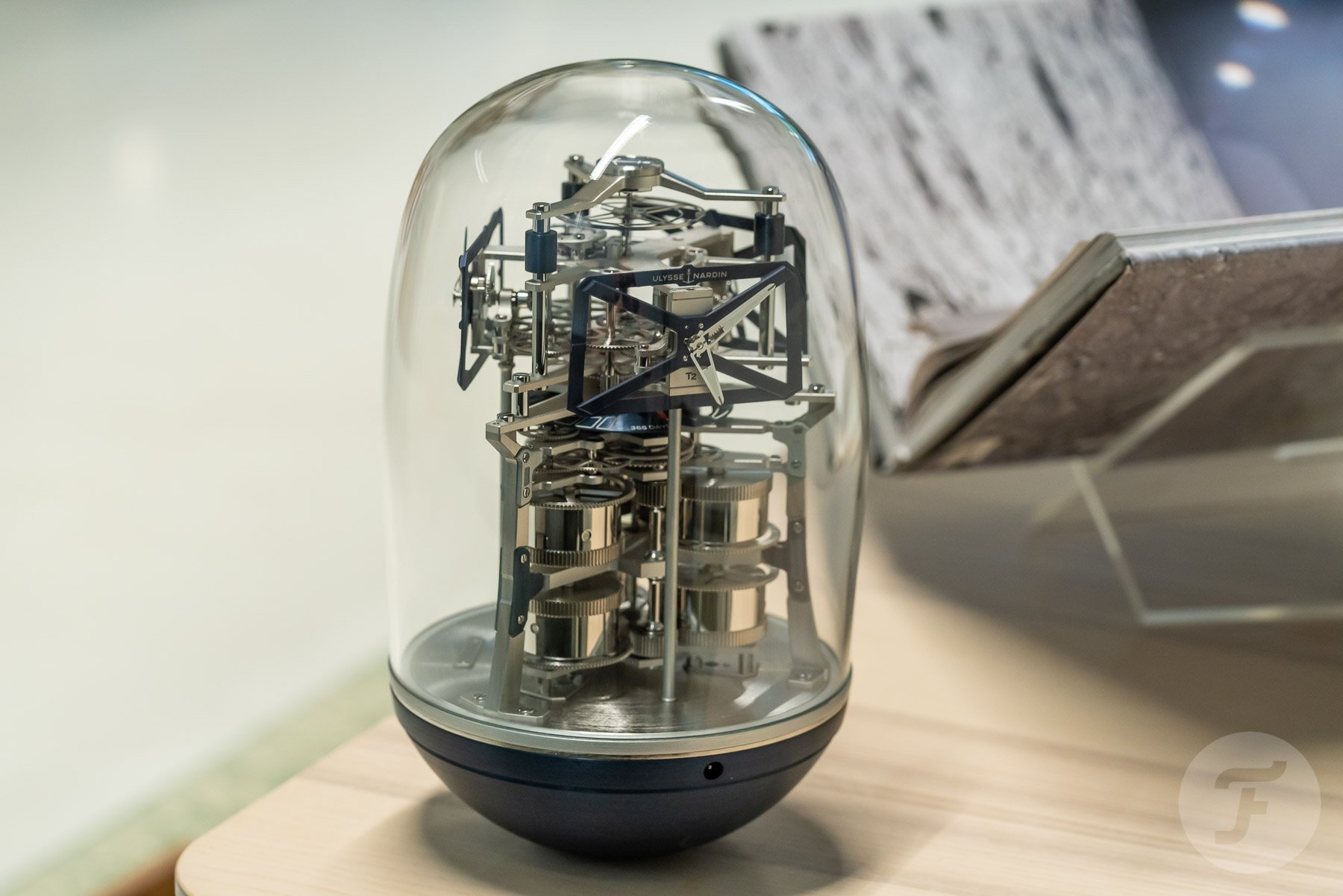 It’s a good thing it won’t topple over because the large ovoid, removable, glass that covers the movement would shatter. The spherical dome is hand blown by glass artisan Romain Montero who works for Verre et Quartz, who created this impressive 3mm thick dome on the shores of Lake Neuchâtel. The dome not only gives the UFO its futuristic shape, but also protects the 663-part movement from dust. And if you thought the number of parts was impressive, the 365-day power reserve is even more mind-blowing. 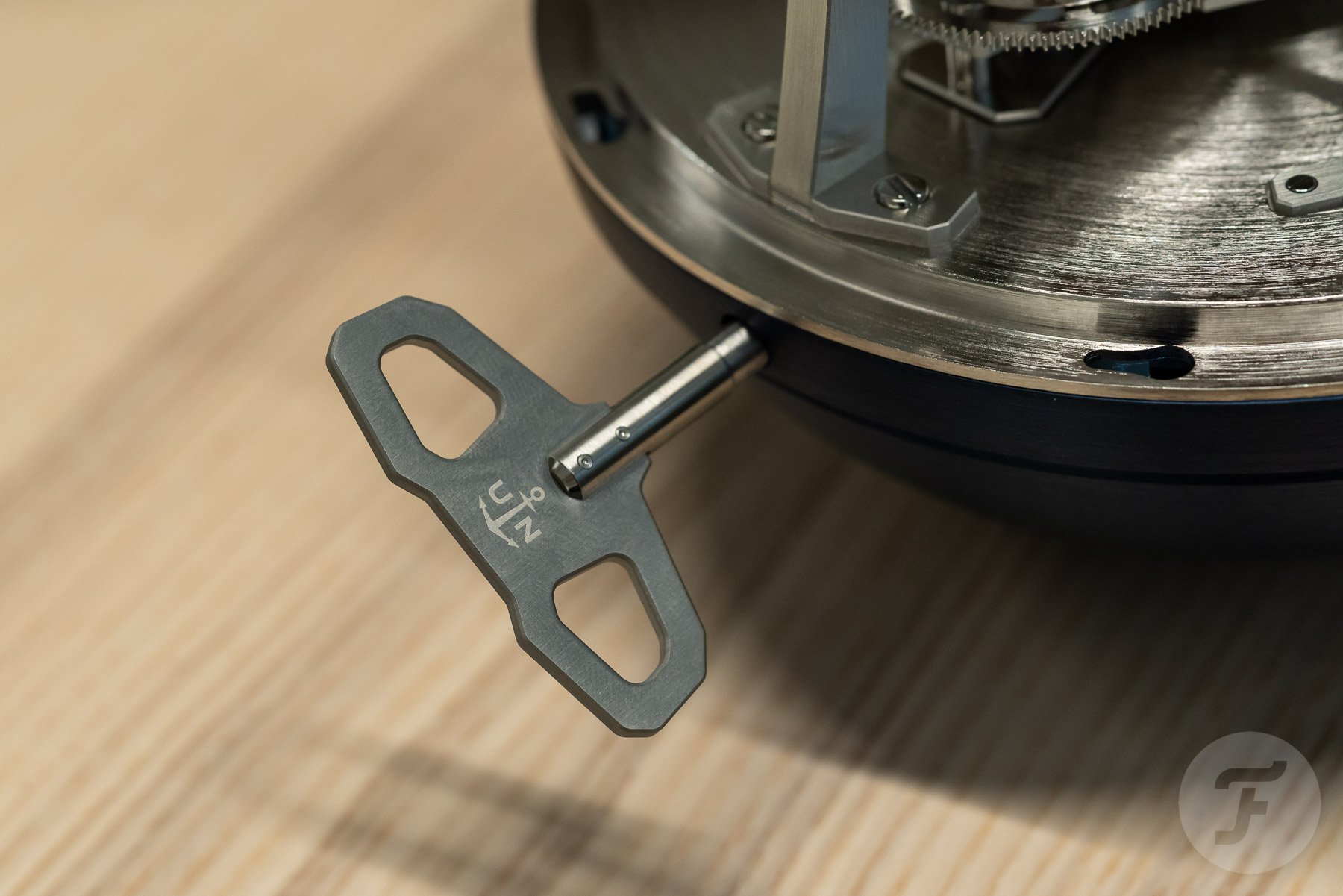 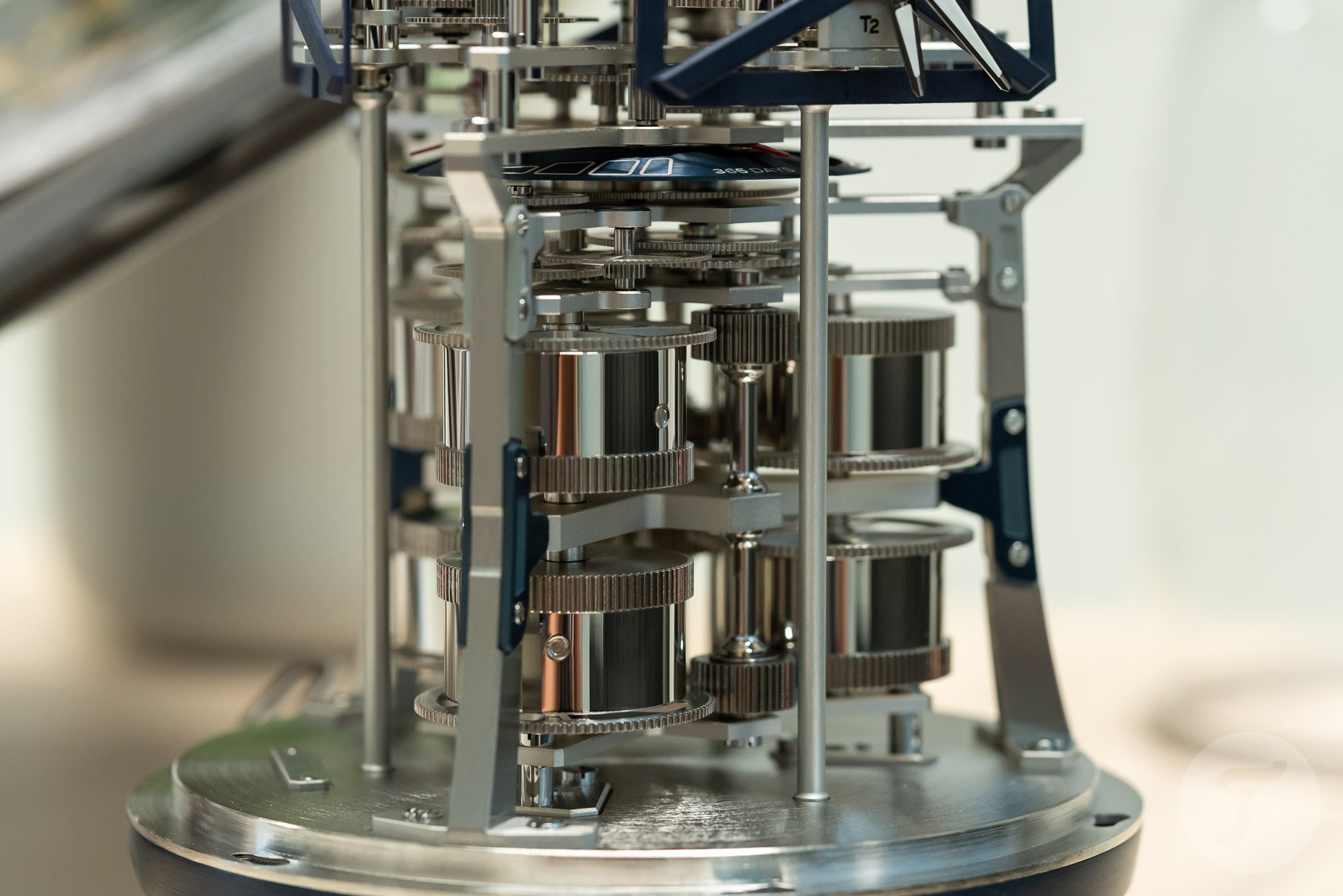 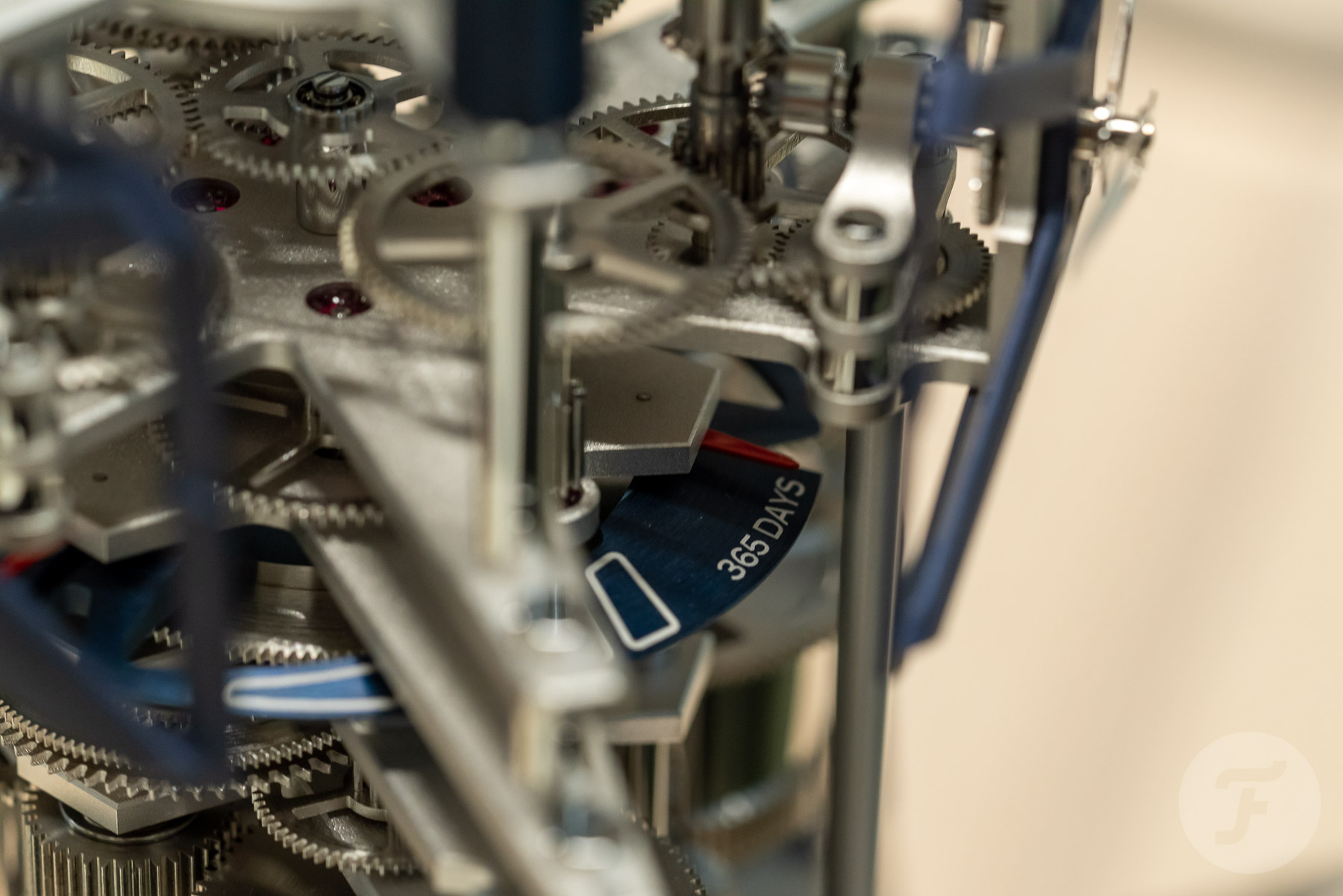 To get the UFO running, a large winding key comes into play. Putting energy into the UN-902 movement of the clock is hard work. Winding six XL barrels is hard manual labor. Luckily, it’s something you do only once a year. For 364 days a year, you can just sit back and admire the time capsule on the table.

… the balance wheel, with a diameter of no less than 49mm, certainly is one of the eye-catchers.

To build the UFO Ulysse Nardin turned to celebrated clockmaker Maison L’Epée – you might know this brand that has been building traditional clocks since 1839, for its clock creations they did together with MB&F. Of the 663 components, the balance wheel, with a diameter of no less than 49mm, certainly is one of the eye-catchers. It swings very slowly because the beating frequency is just 3,600 beats per hour (0.5 Hz). 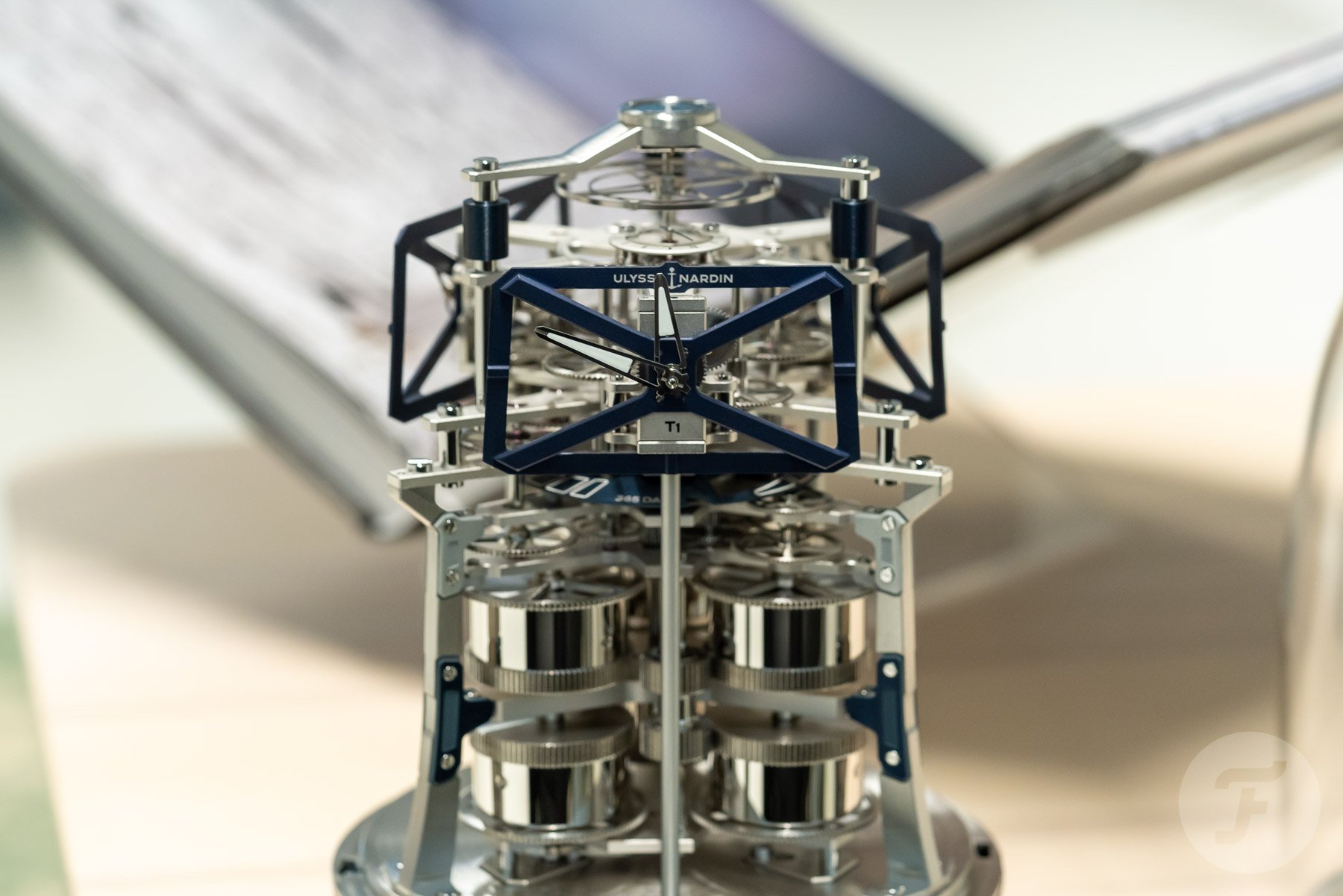 Lots and lots of hours

The UFO impresses, but it also tells time. On three trapezoidal dials no less in three different time zones. And just like the glass dust cover, these dials are also incredibly complex to manufacture. It takes 28 hours to manufacture just eight of them. So if you take into account that there will be 75 Ulysse Nardin UFO table clocks in total with three dials each, manufacturing the dials for the lot, takes no less than 787.5 hours. It partly explains the price of US$41,100. 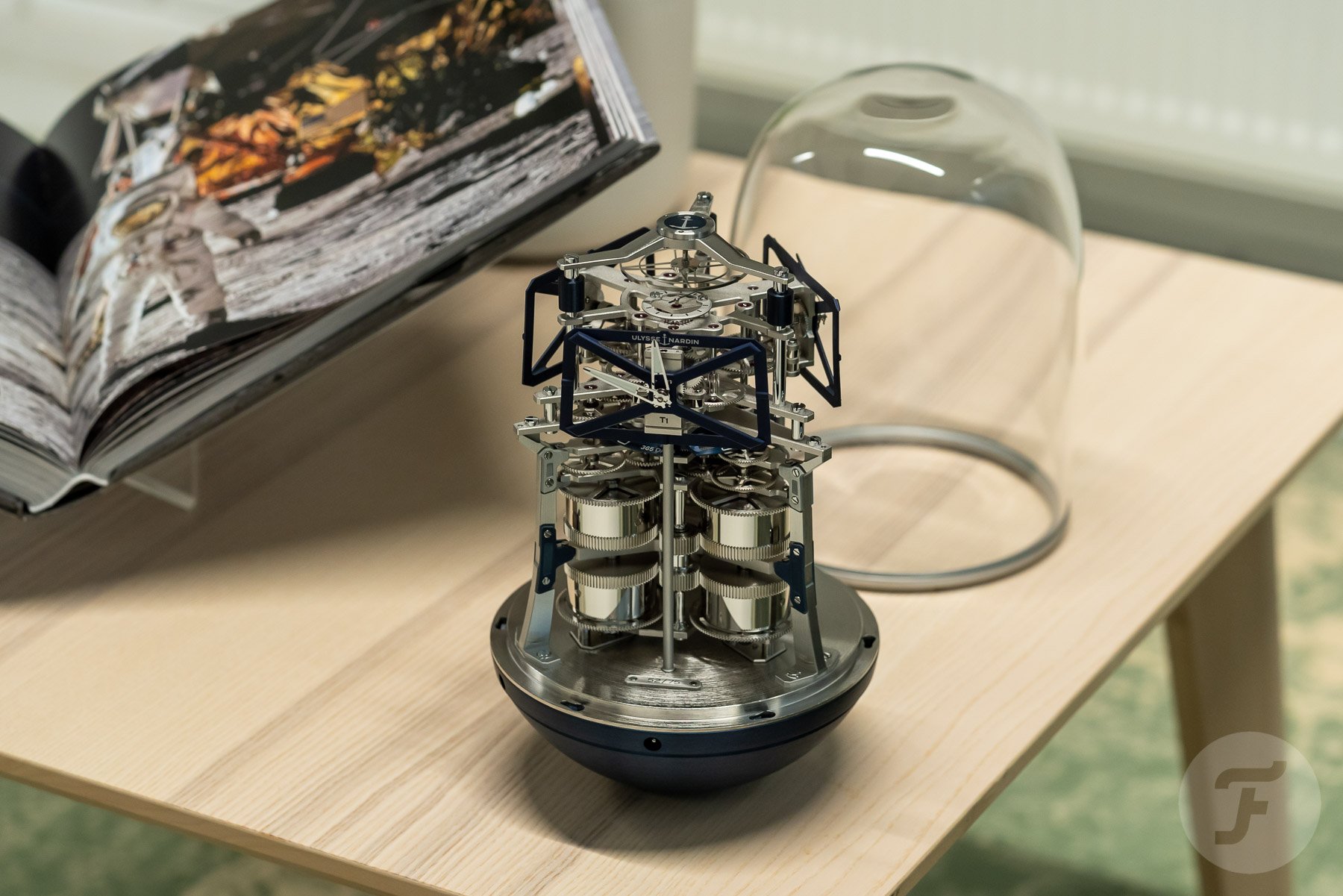 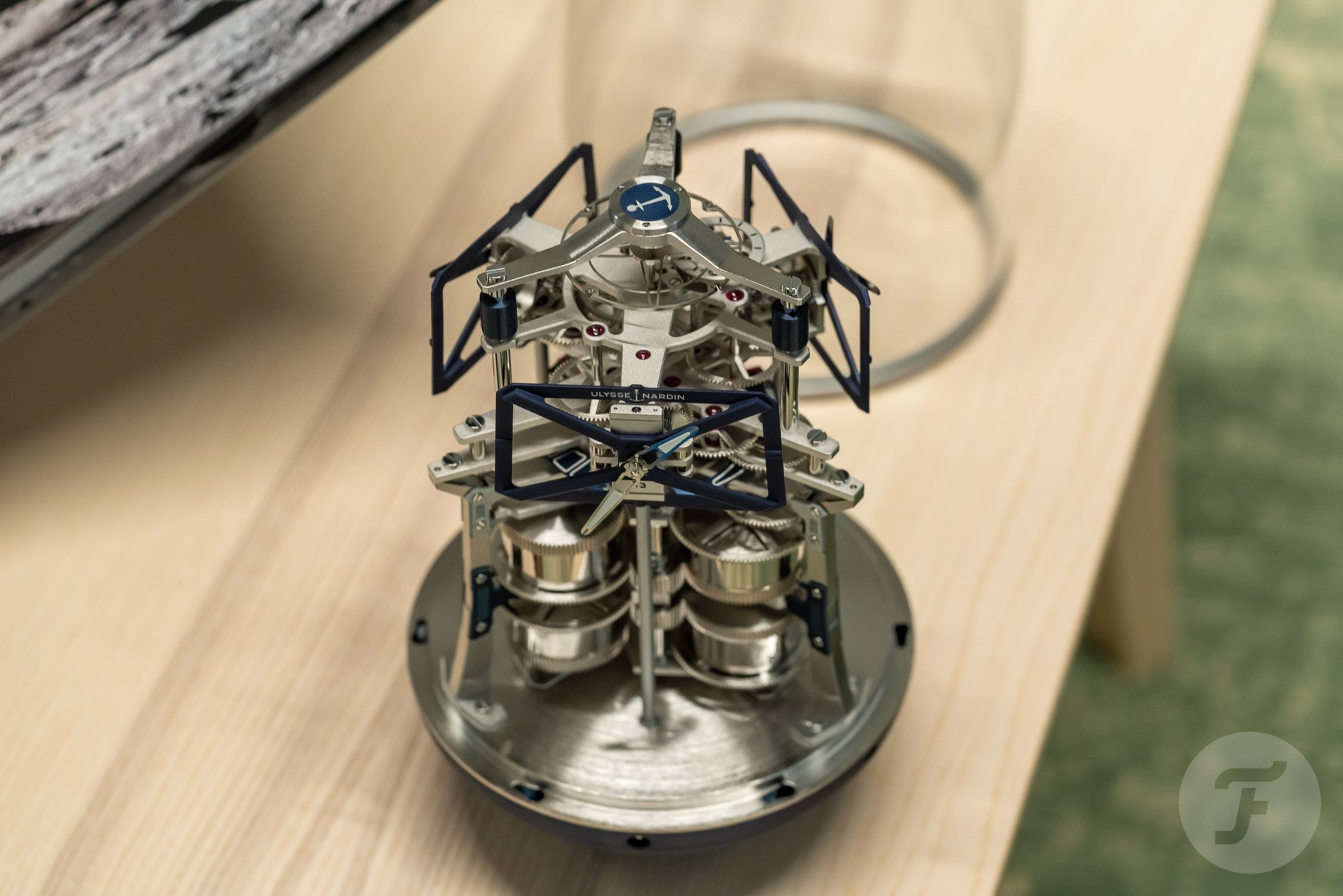 The way you enjoy a clock is quite incomparable to the way you enjoy a watch. Because the Ulysse Nardin UFO is a static object – even though it wobbles when you poke it gently – you have to actively move around it to inspect all the shapes and details. One thing you only enjoy fully is when you look at the UFO from above is the deadbeat seconds on a horizontal dial below the large balance wheel. What you always notice because of the large glass dome is the towering movement with the large barrels. What is cool to see is that the same avant-garde design you see in the Diver X Skeleton LE comes back on the three dials of the UFO. 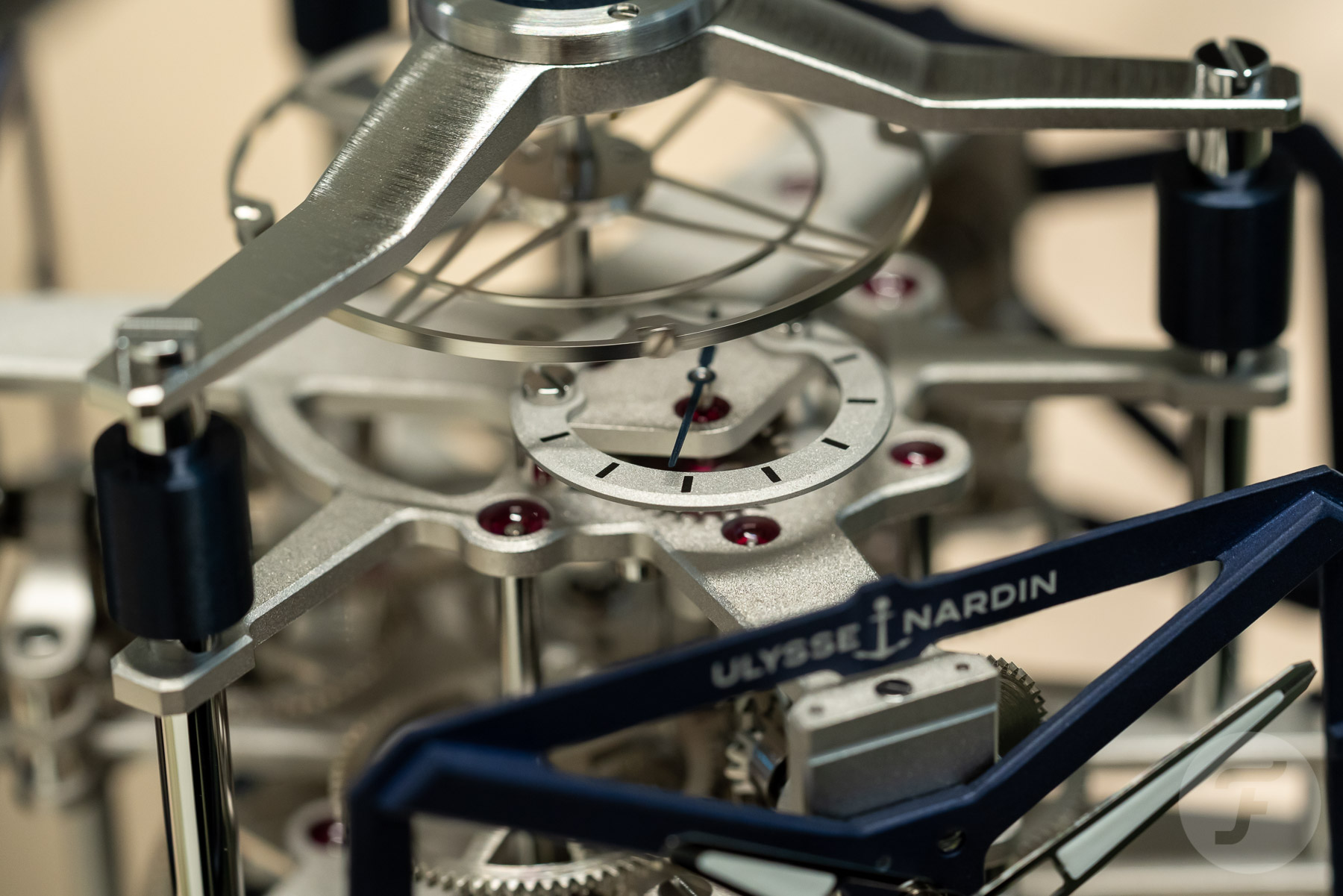 Put on some music and start your adventure

If I were one of the 75 lucky owners of a Ulysse Nardin UFO, I would not leave it on the table once I got it out of the box. No, every once in a while I would put it back in its crate, let someone hide it in my house, dim the light, put on John Williams’ iconic music score from the Indiana Jones movies – I know you have the famous opening tune in your head right now! I would then star in “Indiana Jones and the Raiders of the Lost Clock” and have a blast looking for treasure and uncrating it. I would even dress up with the right hat and whip in my belt. 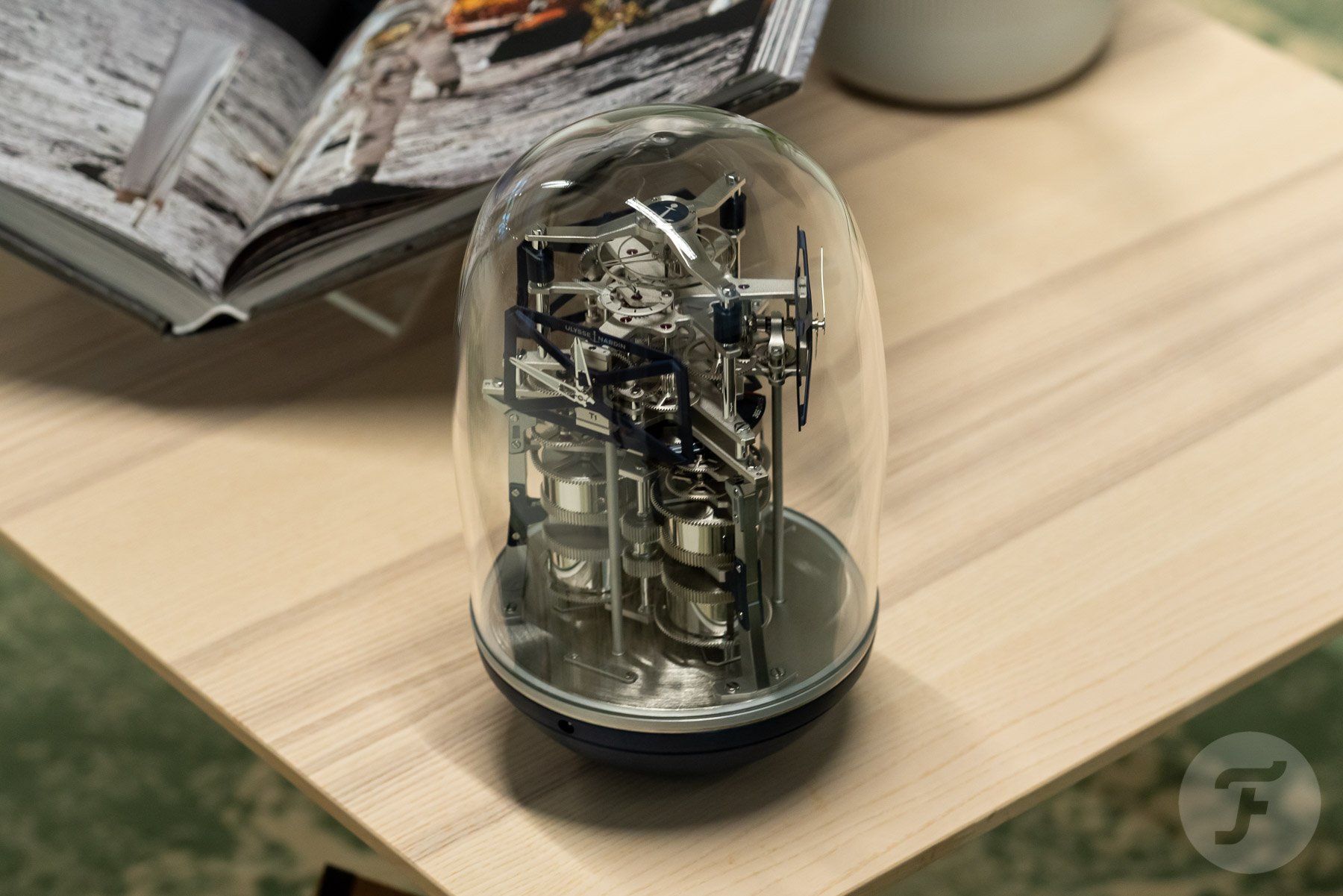