The latest release from Louis Erard sees the Jura mountains-based manufacturer dig deep into the earth and bringing three stunning minerals into the dial of one of the brand’s historic models. Thanks to the use of these natural materials each watch’s dial is unique. The speckles, layers, and lines found in these minerals are the product of millions of years of formation and are all on display on the dial of these watches. Their execution, not just a work of art, but a technical challenge in stone cutting and fine watchmaking. 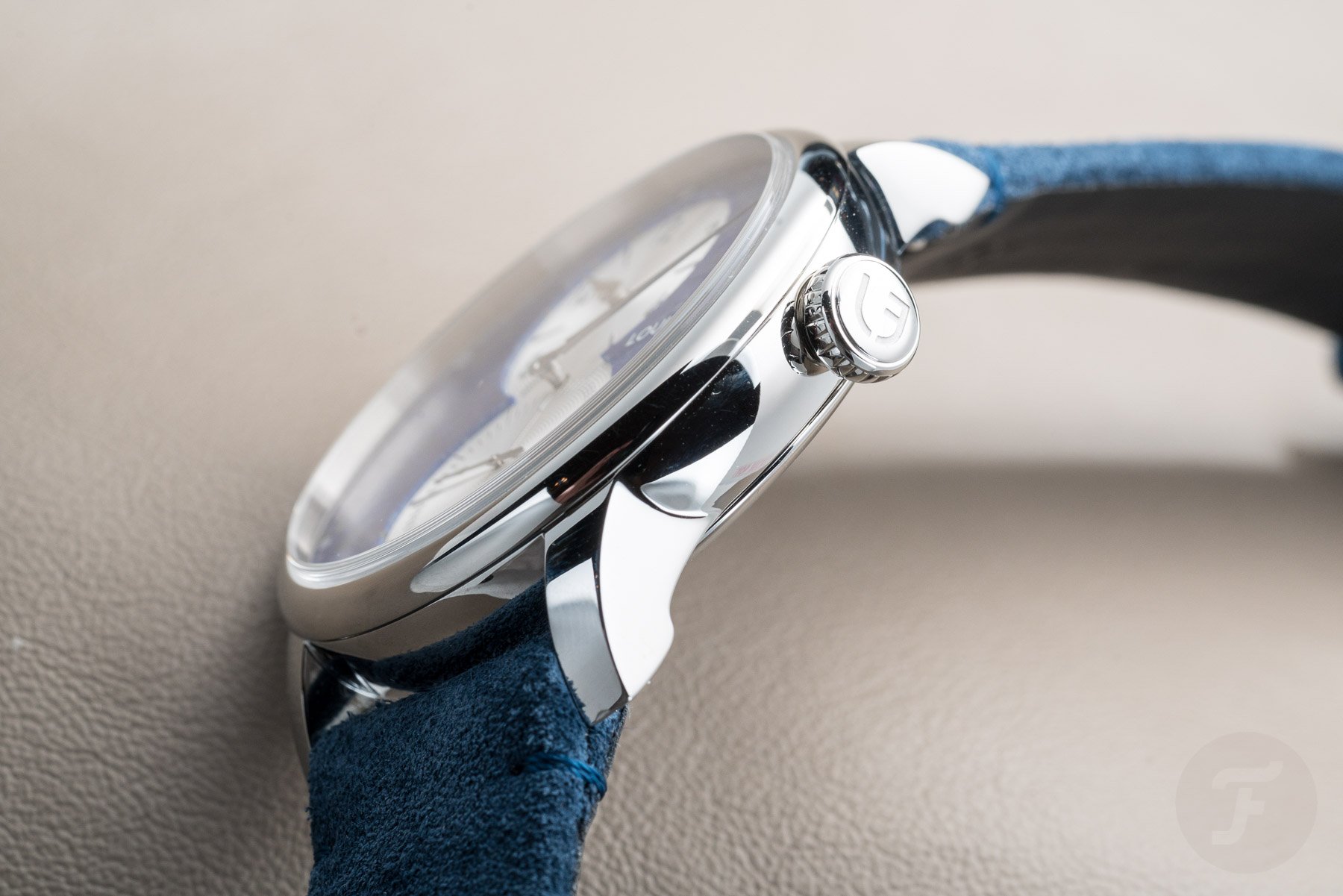 Here at Fratello, we are no strangers to Louis Erard. We got a chance to play with the Louis Erard × Alain Silberstein which left quite an impression on some of the editors. The watch even (mostly) won Rob over, and you can read about it here. My first thought upon seeing these three stone-faced beauties is that they are anything but stone-faced. In fact, much like the Alain Silberstein collaboration, this fresh new take on the Excellence Régulateur gives the watches plenty of character in a rather unique way. Stone dials have been around for a long time now. Other brands have had their fun with these materials, often with stunning results. So just how has Louis Erard managed to freshen things up and give the concept its own spin? Well, for me, the secret is in not going all-in. I’ll explain. 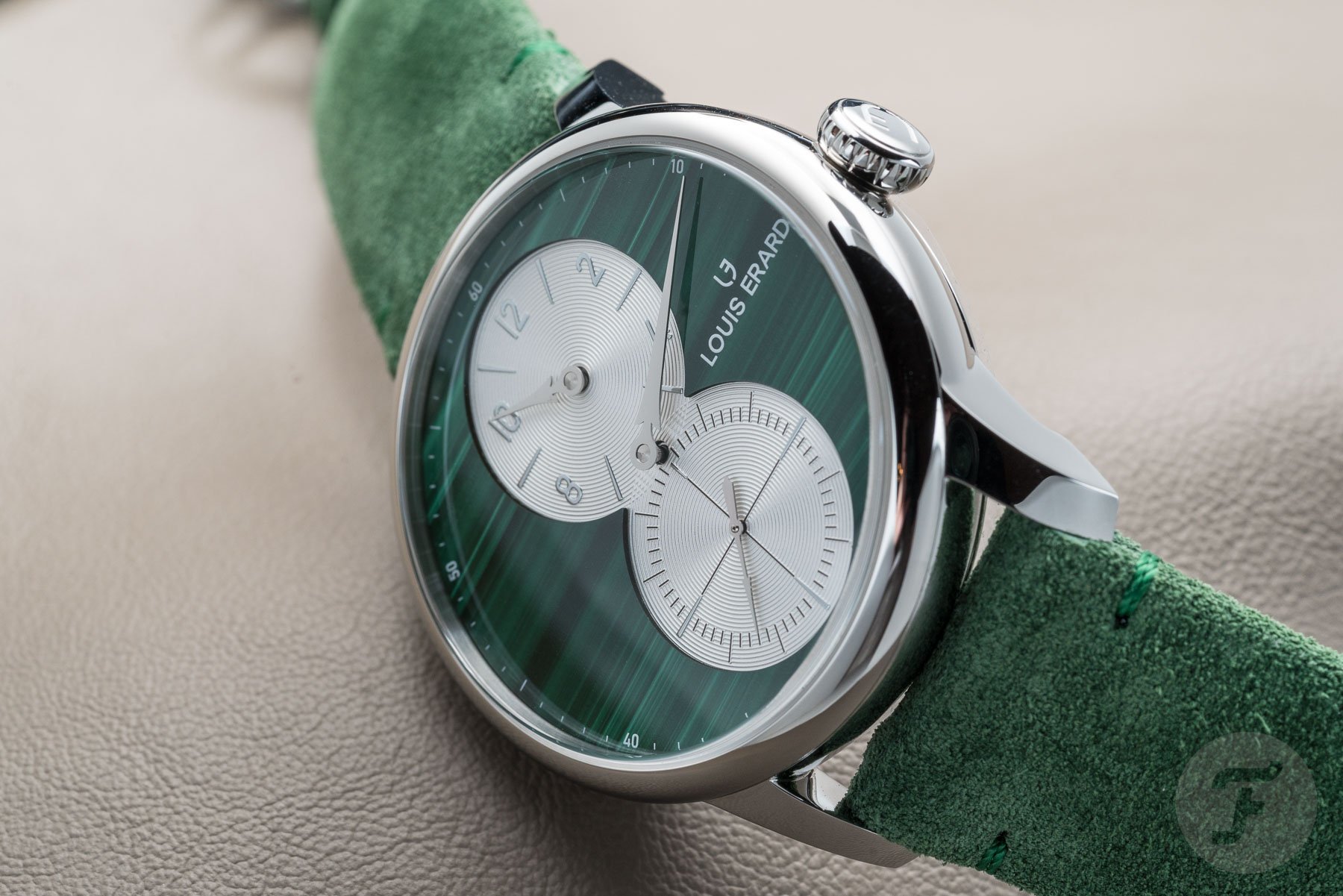 Often, stone dials are so in-your-face that an initial rejection is to be expected. We get it, you used a mineral for the dial, it’s obvious! But with a clever bit of omission, what the Maison has managed to create is a complementary mix of stone and, well, lack of stone. I’m talking, of course, about the wonderful snailed opaline dual counter. A prominent feature of these watches, and a key aspect of the regulator layout of the dials, these “sub-dials” stand in stark contrast to their stony surroundings. This somewhat plays down the use of the special dial materials, which in turn allows you to better appreciate their use. 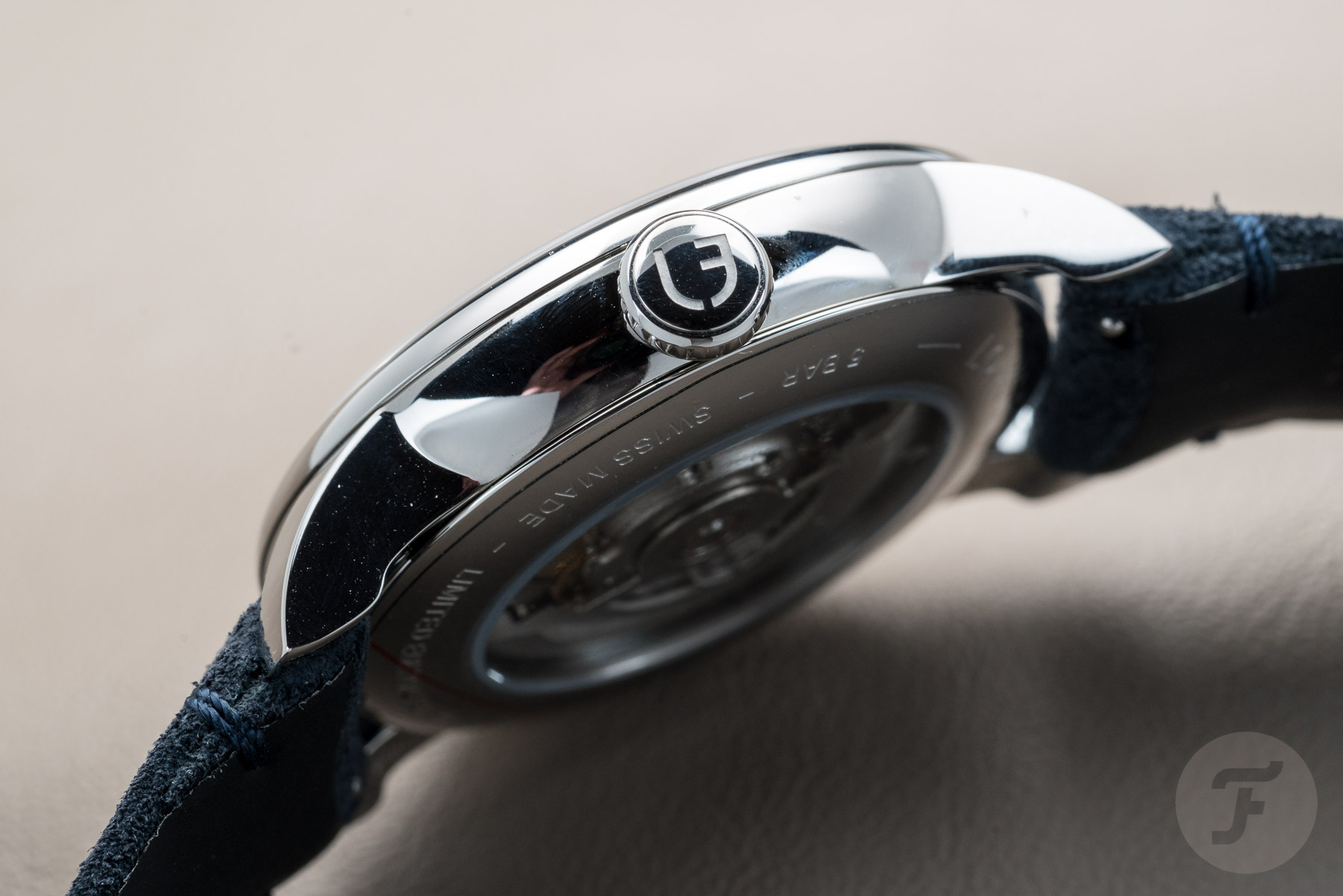 It is also a feature that adds a lot of depth to the dial, as the construction is in two layers. The stone section of the dial, with a beautifully applied minutes track subtly surrounding the dial, is cut in the center to allow for the hours and running seconds dials to sit below it. These two dials overlap in an extremely pleasing textural clash of the snailing of both, the center of which is from where the wonderful fir tree minute hand stems. As if this was not already impressive enough, both technically and visually, the regulator’s dual counter has plenty to offer. 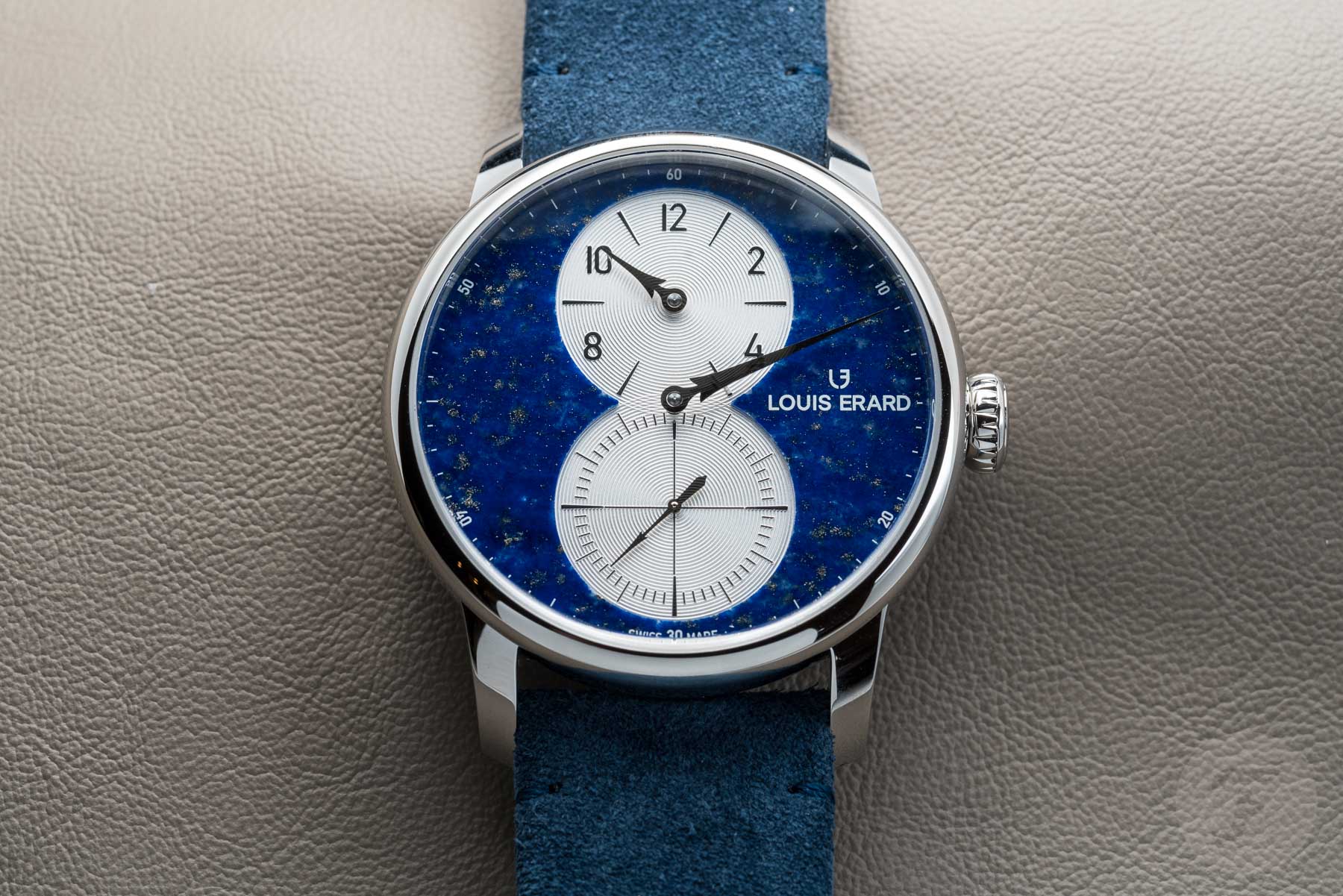 When taking a closer look at the dual counter, one can see a number of beautifully applied silver indexes. The hour register includes the 2, 4, 8, 10, and 12 o’clock positions, separated by sleek silver thorns, with a gap at 6 o’clock where the running seconds counter overlaps. For me, the highlight is this seconds counter. I absolutely love the layout, from the gorgeous silver indexes to the crosshair pattern in the center, it is beautifully designed. Speaking of which, the seconds hand is also stunning. Its thin arrow shape still references the signature fir tree hands found in the hour register and the central minutes hand.

Maybe now what I previously mentioned is becoming a bit more clear. If Louis Erard had relied solely on the novelty of the stones used for making these watches both interesting and beautiful, they may have failed. However, the centerpiece of these watches remains the regulator complication and the elements which represent it. These central elements have been given as much if not more care and attention as the stone elements themselves. And because of this, a perfect complementary balance has been struck. The two elements work together, instead of competing for the spotlight. 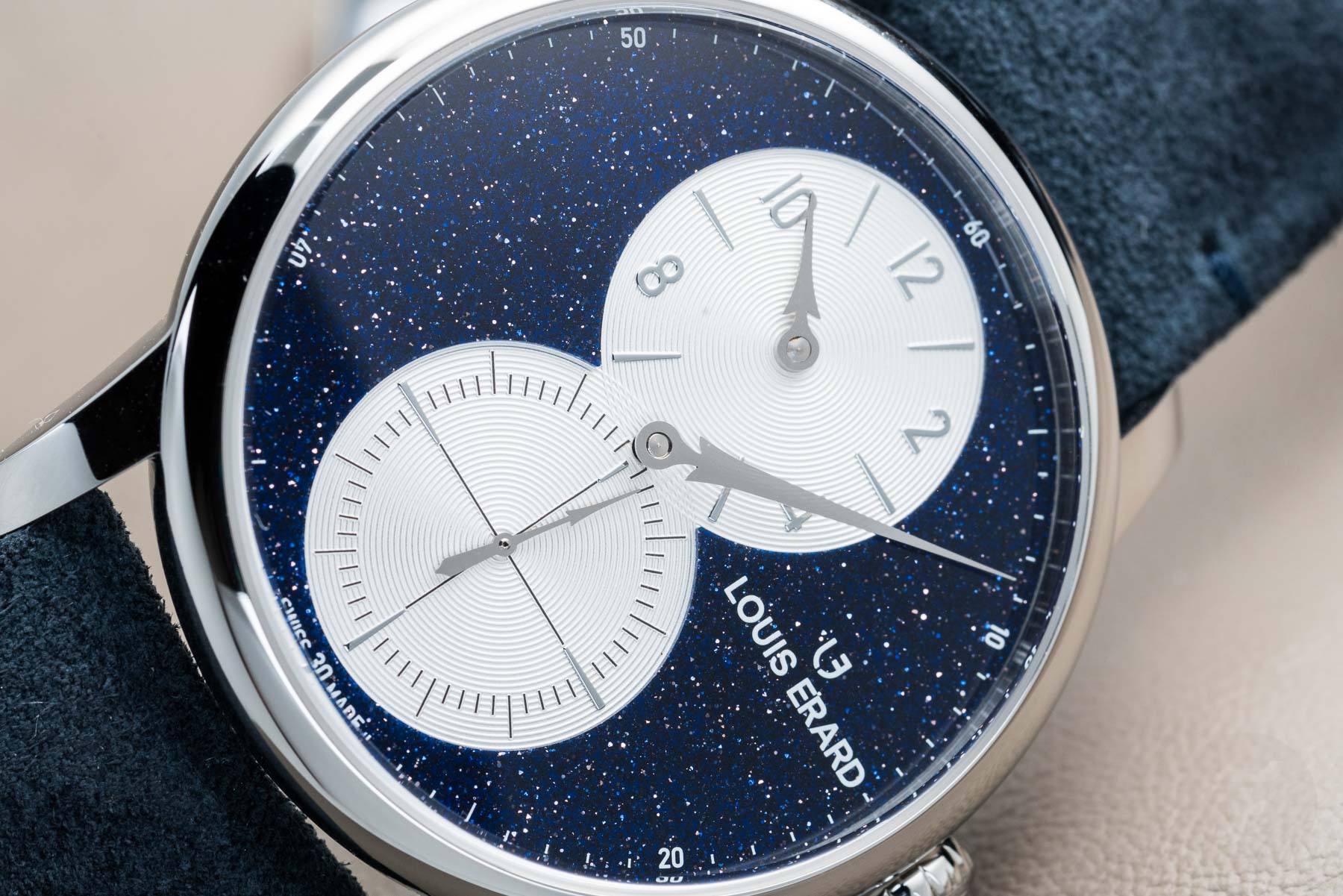 Speaking of stones, let’s now have a look at the three chosen for the dials of these three watches: the first being Aventurine, or more specifically Aventurine glass. Now, though it is a kind of stone, Aventurine glass is actually a man-made material and not a naturally occurring mineral. First created in the 17th century in Venice by artisan glass-blowers, it has a dark blue, almost purple hue, dotted with colorful flecks. It is thought to have been created accidentally when metal shavings fell into the molten material. The resulting material is a deep blue reminiscent of a moonless night sky filled with stars. 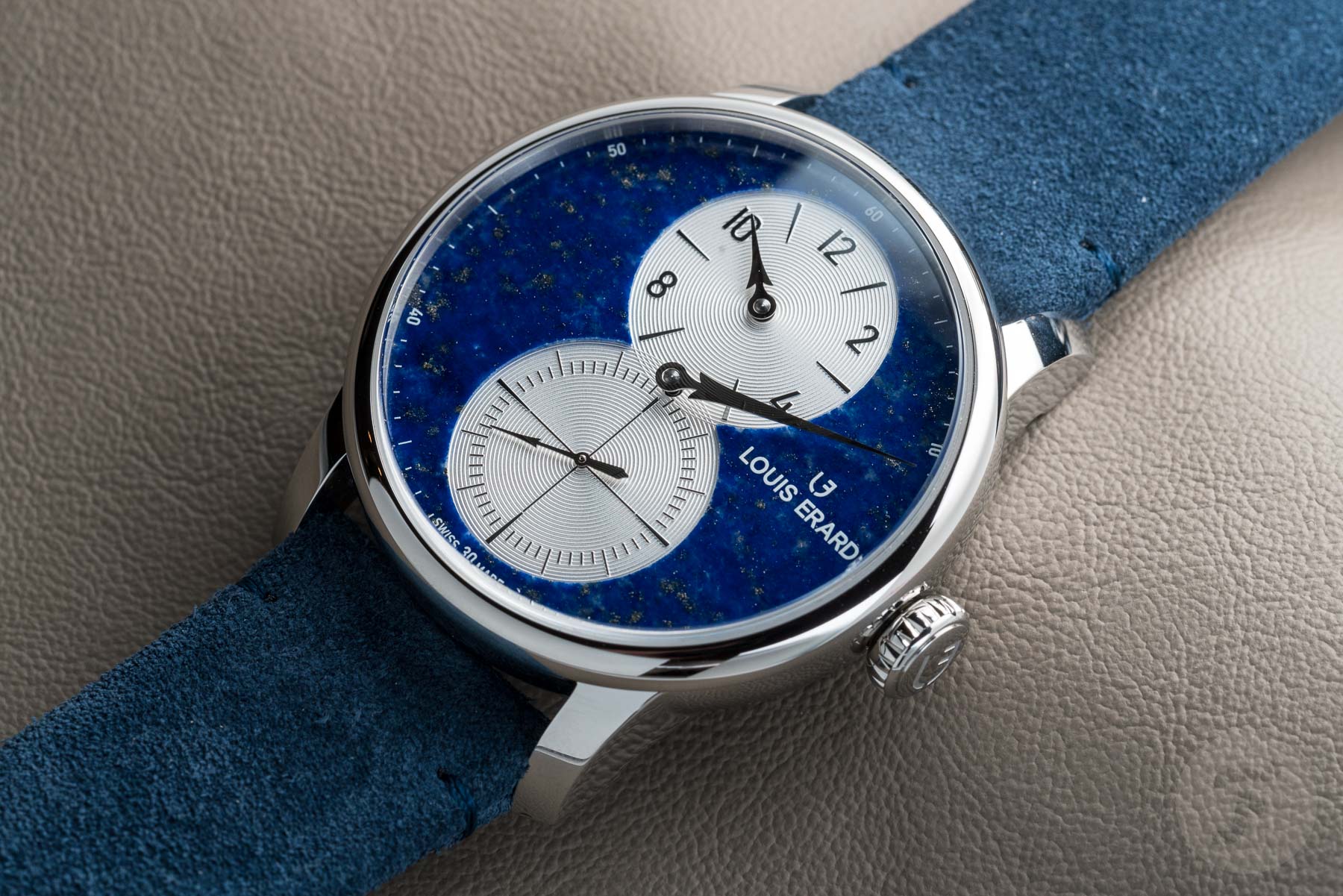 The second stone used is Lapis-Lazuli. A naturally occurring metamorphic rock, Lapis-Lazuli has a deep cerulean color. Often used as a blue pigment as well as an ornamental stone, it makes for a beautiful blue dial, dotted with pale golden silicate inclusions. These shine amongst the bright blue like fireflies in a summer night sky. As with all natural materials, its beauty comes from these naturally occurring irregularities. The tones of blue found in this stone range from a deep dark ultramarine to a pale powder blue. 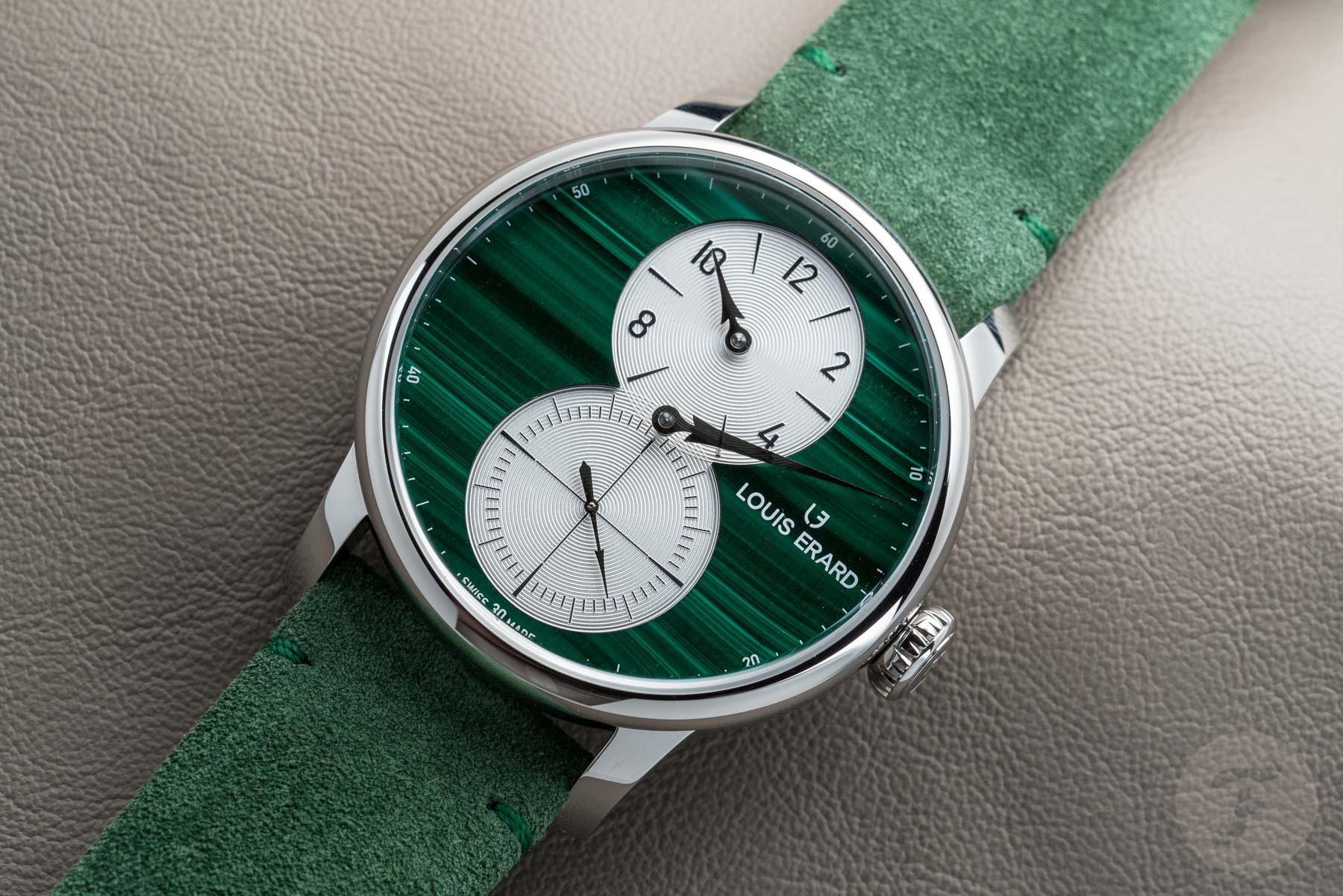 Third on the list, is the Malachite dial on this version of the Excellence Régulateur. In contrast to the other two models, which provide a stunning blue backdrop, this one takes us down from the sky to the woodland valleys of the Swiss Jura. Green horizontal layers ranging in tone from a lively turquoise to a deep jade decorate the dial. This creates dynamic contrast with the undulating snailing of the regulator counter. Malachite has long been used in jewelry and other luxury items, and it is clear why. The refreshing organic look of it created a lush and soothing canvas for Louis Erard’s fantastic timekeeper. Though it’s not the first time Malachite makes its way to the dial of a watch, it is certainly a powerful execution worthy of recognition. 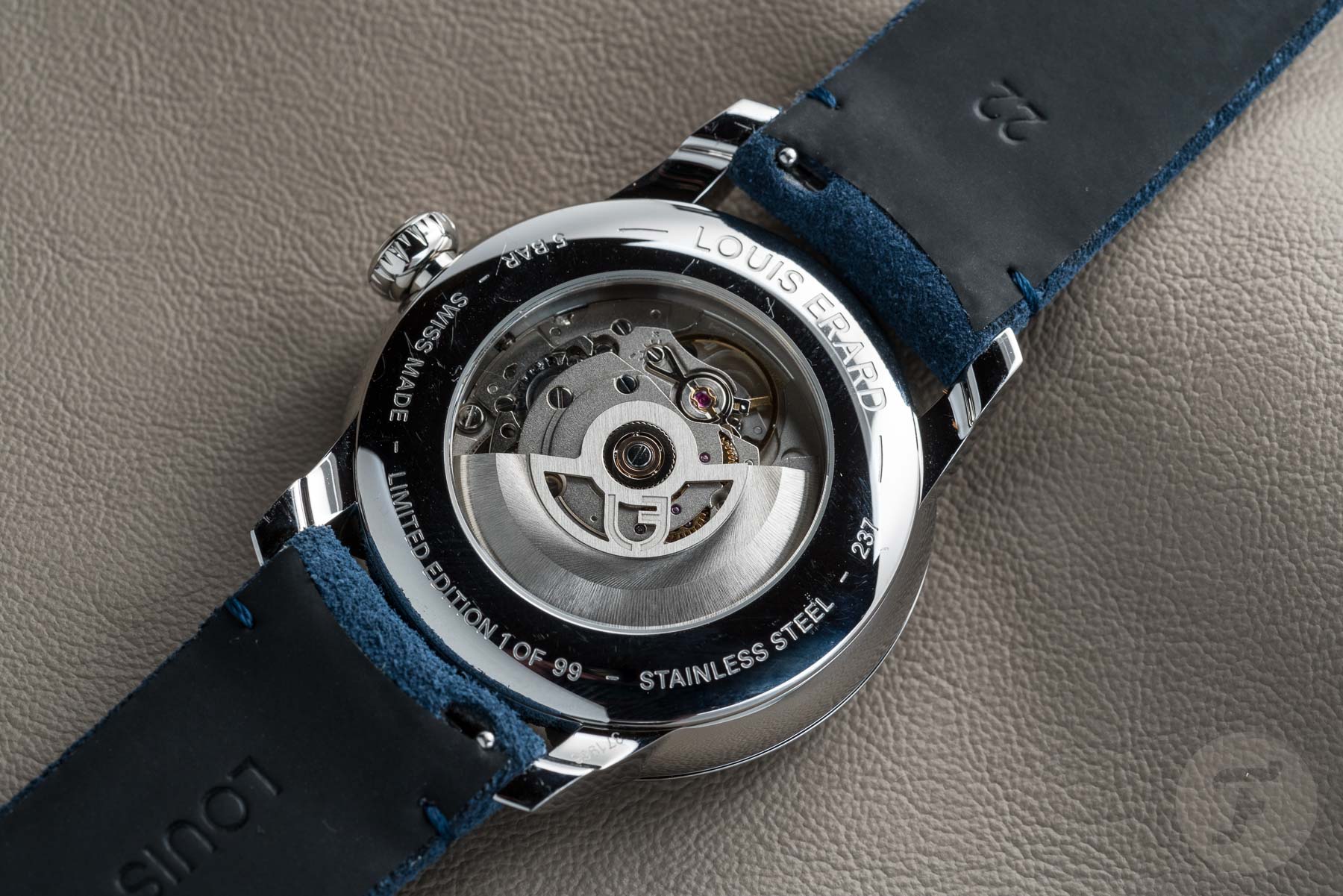 The watches are all cased in 42mm polished stainless steel cases with a 22mm lug width, a 49.6mm lug-to-lug, and 12.25mm thick. The case matches the elegant aesthetic of the dials. Overall it gives these pieces a classy look that could be dressed up or down as you like. The beautiful dials can be appreciated fully through a domed sapphire crystal with an anti-reflective coating. All three models come on a matching, nicely tapering, calf nubuck leather strap with matching stitching and quick-release spring-bars. They also feature a see-through case back engraved with the corresponding limited edition number out of 99. The movement visible through the case back is an automatic Sellita SW266-1. Beating at 28,800 VpH, the élaboré grade movement has 31 jewels and 38 hours of power reserve and features a Louis Erard signed oscillating weight. 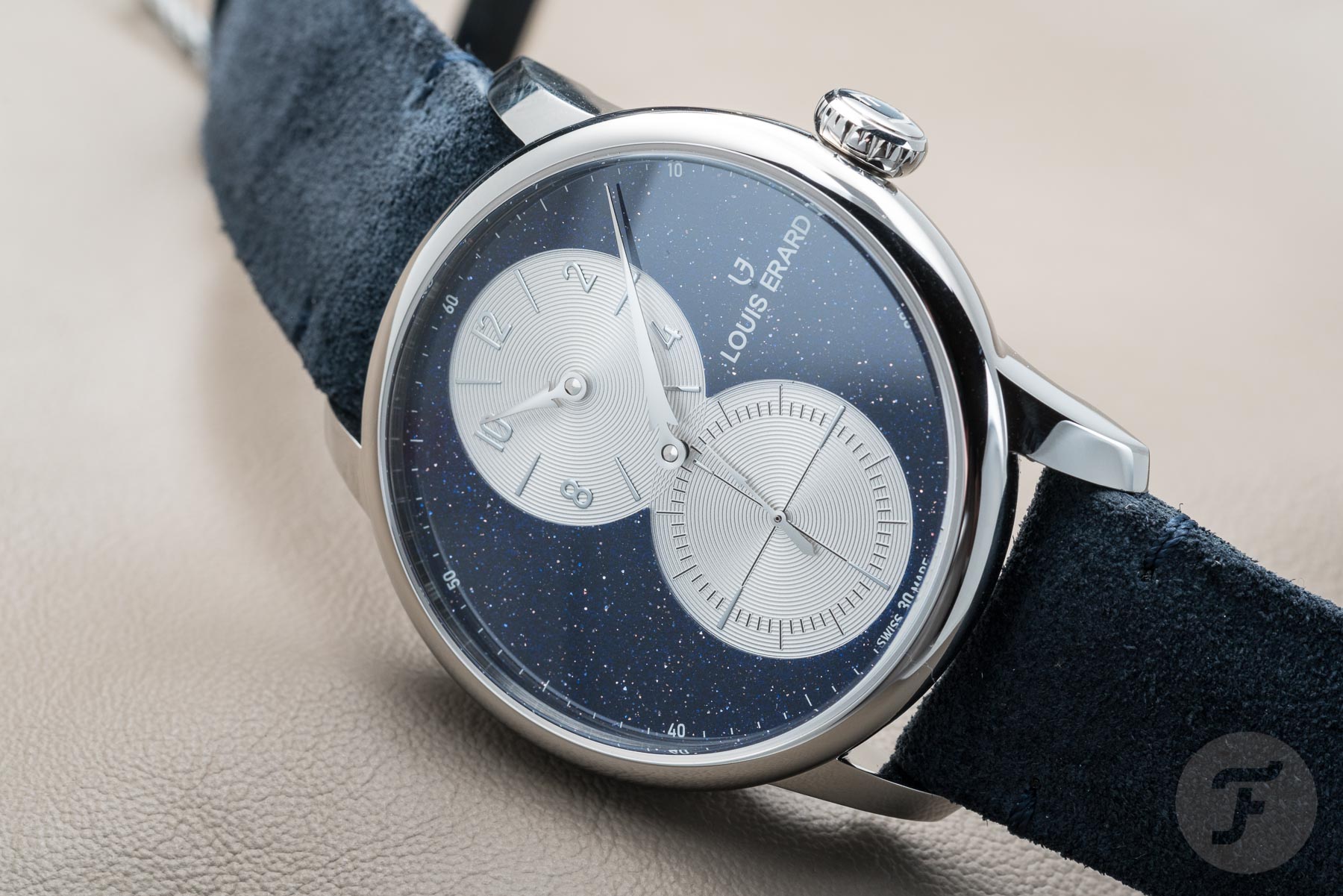 As previously mentioned, a limited release of 99 pieces in each dial variation will be released. The RRP is CHF 2,900. Considering the great craftsmanship of the dial and the overall quality of these watches, I would say they are well worth this price. The only question that remains is, which one of the three would you pick? Personally, I would go with the Aventurine glass dial. The deep blue makes it the most formal and refined of the three. Let me know which would be your choice in the comments below. For more information on these three models visit the Louis Erard website here.