Introducing The M.A.D.1 RED — Now Available To MB&F’s Enemies Too

The year 2021 was one of disappointments, chief of which was the continuation of the dreaded you-know-what. For some, though, the ultimate let-down was being ineligible to buy the M.A.D.1 timepiece from MB&F — although it’s not an MB&F. Confused? Well, so were we when the first M.A.D.Edition watches began appearing on social media in June 2021. Following this stealth launch was a tidal wave of demand that outweighed the intended audience and distribution. This year, those hoping to own a watch blessed with Büsser’s creative (figurative) juices are in luck. The M.A.D.1 RED is the production version of the original M.A.D.Edition, previously only available to MB&F’s friends and family. Though I doubt he has any, this new model is available to even Büsser’s enemies. Saying that, it may be just as hard to acquire as the original. However, we’ll fill you in on obtaining a M.A.D.1 RED right here on Fratello.

Maximilian Büsser and Friends are renowned for magnificent marvels that push the boundaries of horology. With extreme levels of detail, engineering, finishing, and creativity, the entry price can be a barrier for most. Even the lower-cost HMX was too much, even for the “Friends” that contribute to materializing Büsser’s visions. The realization that MB&F watches were out of reach for many of his friends and family sparked Büsser’s imagination in creating a new entry-level model. However, MB&F tread cautiously to avoid cheapening the brand for the masses and damaging the exclusivity its collectors expect. Therefore, the M.A.D.1 model came under the label of a new spin-off brand, M.A.D.Edition. For that reason, the M.A.D.1 exists in parallel with the Horological and Legacy Machines.

So, what exactly is the M.A.D.1, and why is it so special? You have to go back to 2014 when the M.A.D.1 was merely a lightbulb hovering above Büsser’s bouffant. The concept of a lateral time indication with rotating discs and a central exhibition to the titanium-and-tungsten triple battle-ax rotor is unusual for most brands. Still, it’s reasonably sober stuff from MB&F. This is a Maison that delivers watches in the shape of a bulldog and a frog. A round automatic watch with hours and minutes, albeit upside down, is akin to Büsser settling down to a quiet life. But that doesn’t mean this M.A.D.1 is no less a triumph of engineering. Working within a tight budget to achieve a target unit price of CHF 1,900 is not in Büsser’s nature. And developing the M.A.D.1 alongside the MB&F machines without disrupting productivity is a monumental task.

The same watchmakers mounting the suspended balance wheel on the Legacy Machine Perpetual are modifying the base Miyota 821A caliber for the M.A.D.1. The finishing may not be up to the same standard as those machines, but ingenuity is a hard habit to shake off. Choosing Miyota was key to the aesthetic. The unidirectional winding allows for free spinning inertia in the non-winding direction without a brake to slow it down. The fast-spinning rotor is similar to the Valjoux 7750 with its “wobbling” effect on the wrist and is visually dazzling under the front sapphire crystal. Housed in a 42mm steel case, the crown sits at 12 o’clock with cantilevered lugs mounted from the bottom of the case, Oh yes, this is still mad as the name suggests, but somehow, it’s about as mainstream as we will see from the pencil of Maximilian Büsser. 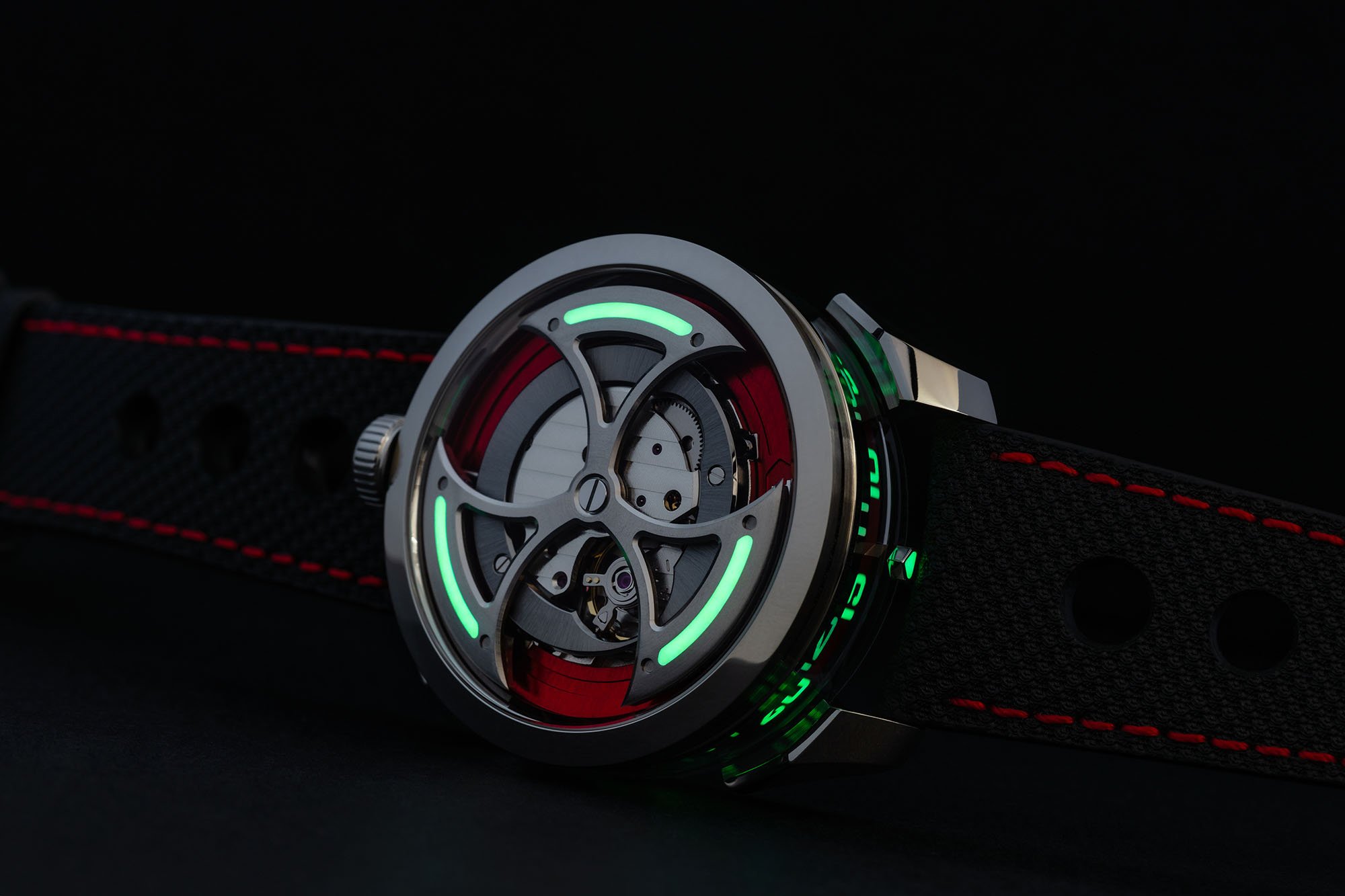 All this talk of the original M.A.D.Edition and we haven’t even discussed the new M.A.D.1 RED — *clears throat* — it’s red. Whereas the original M.A.D.Edition had blue accents on the aluminum hour disc; the new version has a cherry red disk for the minutes. At least the true friends and owners of the original have a distinguishing characteristic for their loyalty. As well as this shift of blue to red, the M.A.D.1 RED has a thinner bezel and conventional round crown. The proprietary case construction is the same, about which Büsser remains tight-lipped. Also, something else that was a mystery was the slightly convoluted allocation process. Before, only long-time patrons supporting the brand were offered the opportunity to purchase the M.A.D.1, along with the hundreds of suppliers and experts contributing to MB&F creations and who make up the “Friends” part of the name.

One of which is James Thompson, aka Black Badger, which is how I first heard of the watch’s existence. His post on Instagram stirred up a social media storm of frantic and feverish collectors clamoring to know about this watch, especially when the original CHF 1,900 price tag was revealed. The M.A.D.1 RED, though not quite as affordable, is still relatively affordable at CHF 2,900. And is available to the wider public. But given the challenge of producing the M.A.D.1 alongside MB&F’s annual output of 200 pieces, the M.A.D.1 RED will likely still be unobtanium. The tools, personnel, and facilities are not catered to handling the demand. With that, there are still a few hoops to jump through to get your hands on a M.A.D.1 RED. 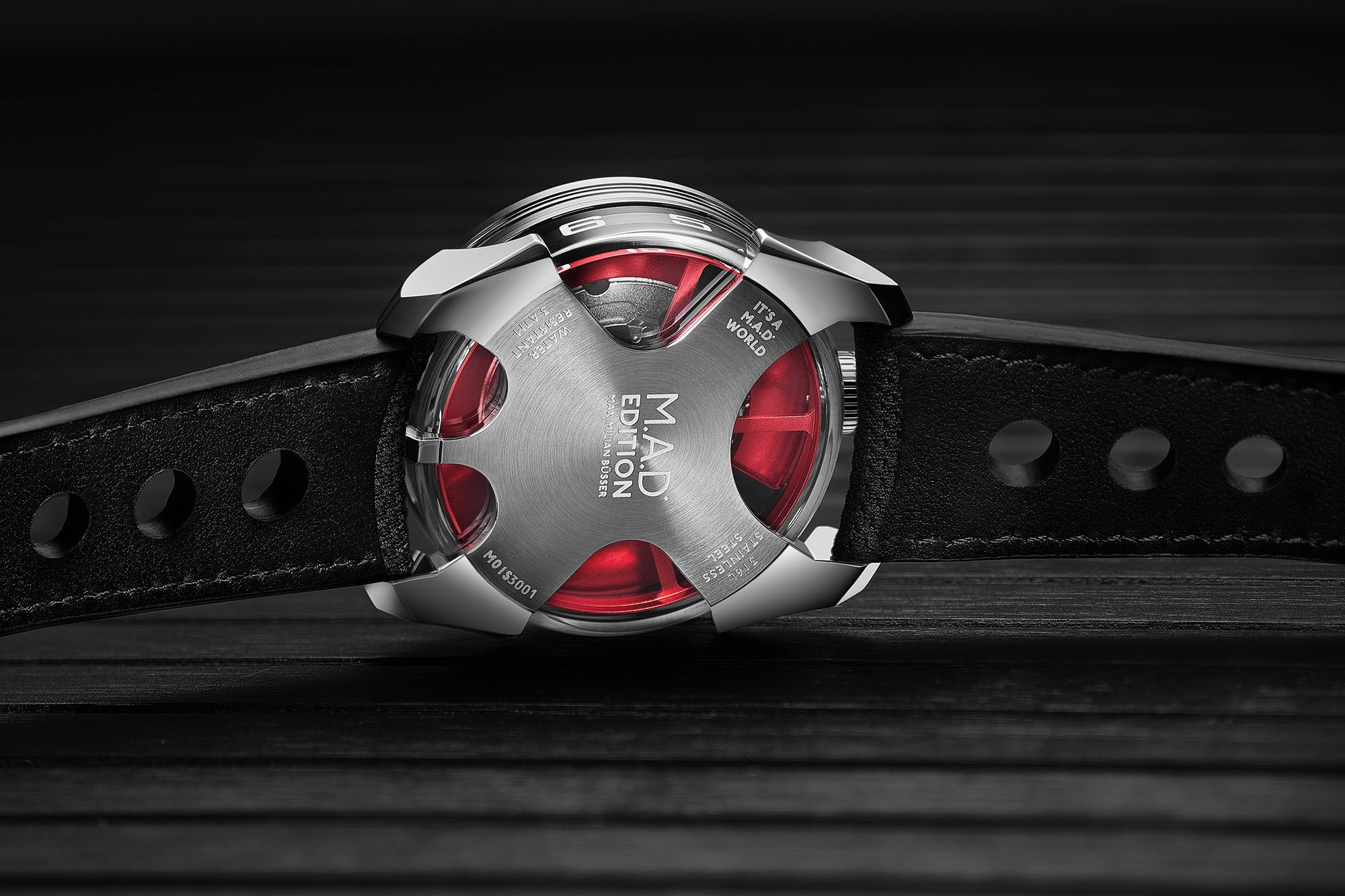 With the news going live today, MB&F will also open the lottery ticket page in the eShop. Anyone will be able to acquire a ticket, and as a bonus, it is free, for now. The lottery page will remain open for two weeks until April 5th. In parallel, budding buyers who registered their interest in buying the M.A.D.1 during the past ten months will receive preferential treatment in making that a reality. MB&F will contact these people to explore their interest in purchasing the new M.A.D.1 RED. This priority option to buy will also be open until April 5th. The next day, April 6th, after deducting the confirmed priority purchases, the remaining pieces will be available for the lottery. The random draw will determine the numbers to match the lottery tickets, and the owners can skip home singing, “I’ve got a golden ticket!”

The M.A.D.1 RED is limited to one per person. Therefore, you cannot enter the lottery if you have access to a piece through the priority list. Likewise, it’s one lottery ticket per person. If you see someone with more than one allocation, you should probably question your friendship with them. For everyone else, best of luck in acquiring the M.A.D.1 if it’s on your radar. The watch is expected by September and comes on a black leather strap with red stitching and an oversized folding clasp. You can read more on the M.A.D.Edition M.A.D.1 RED on MB&F’s website here. 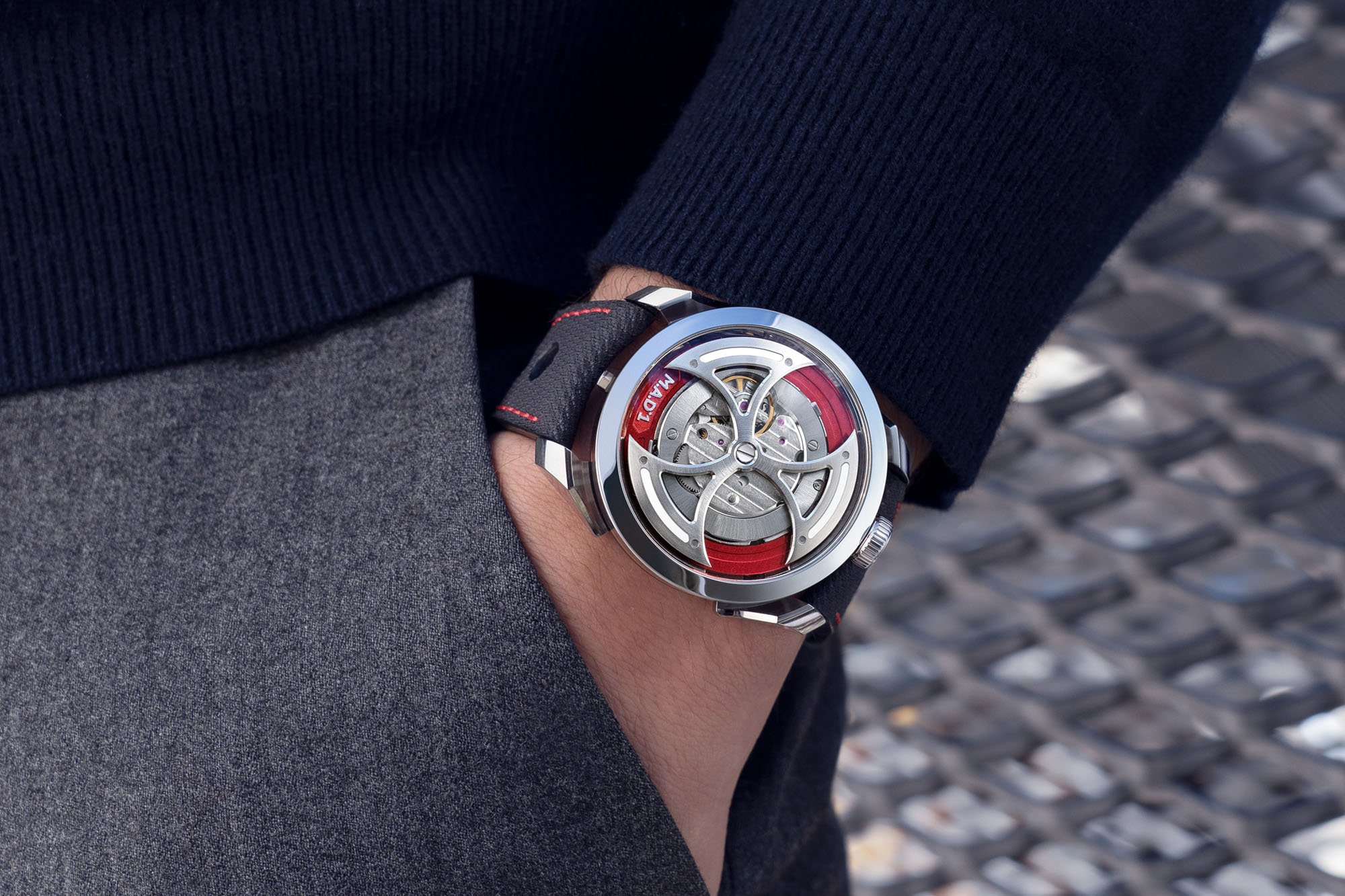 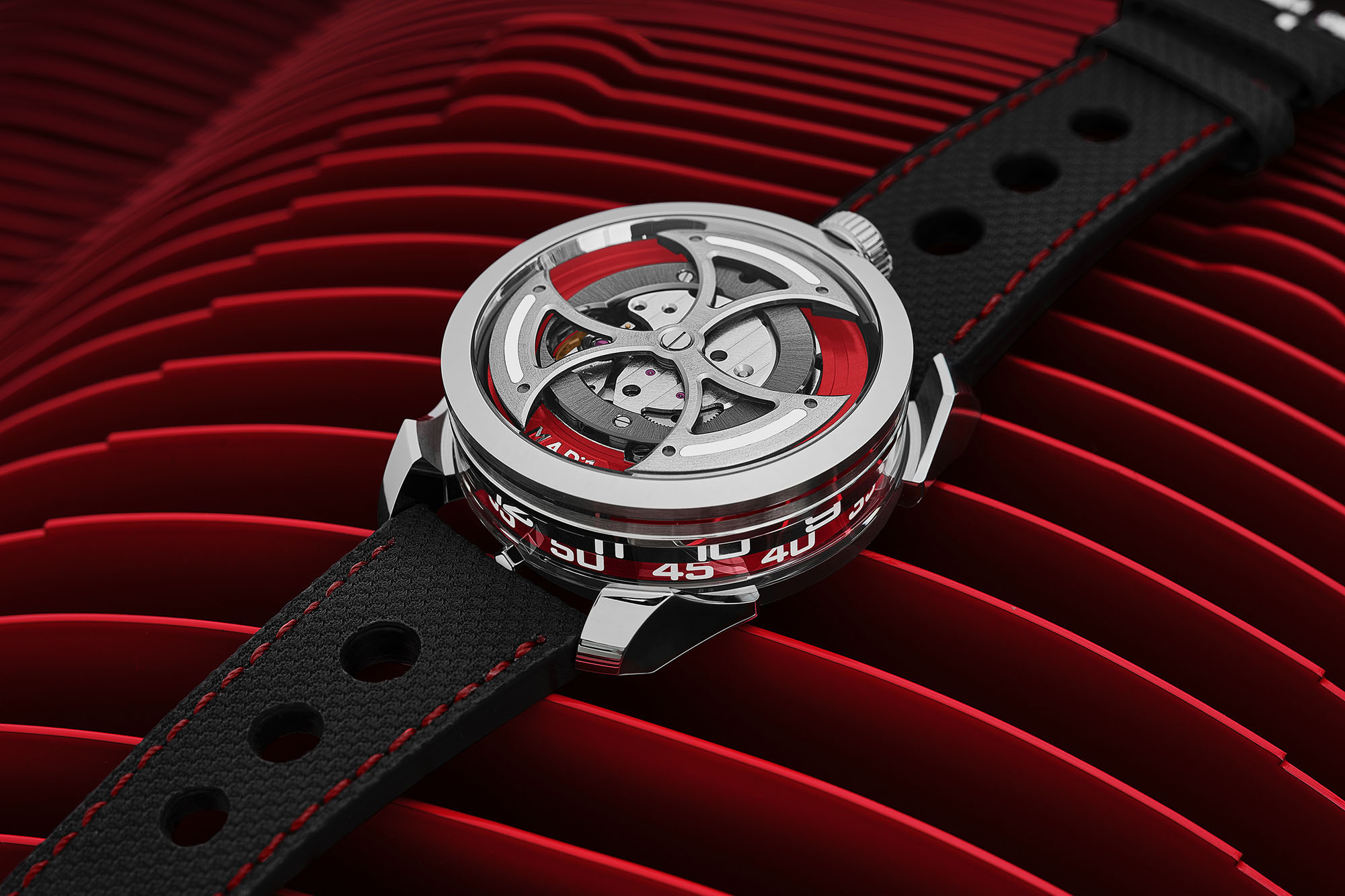 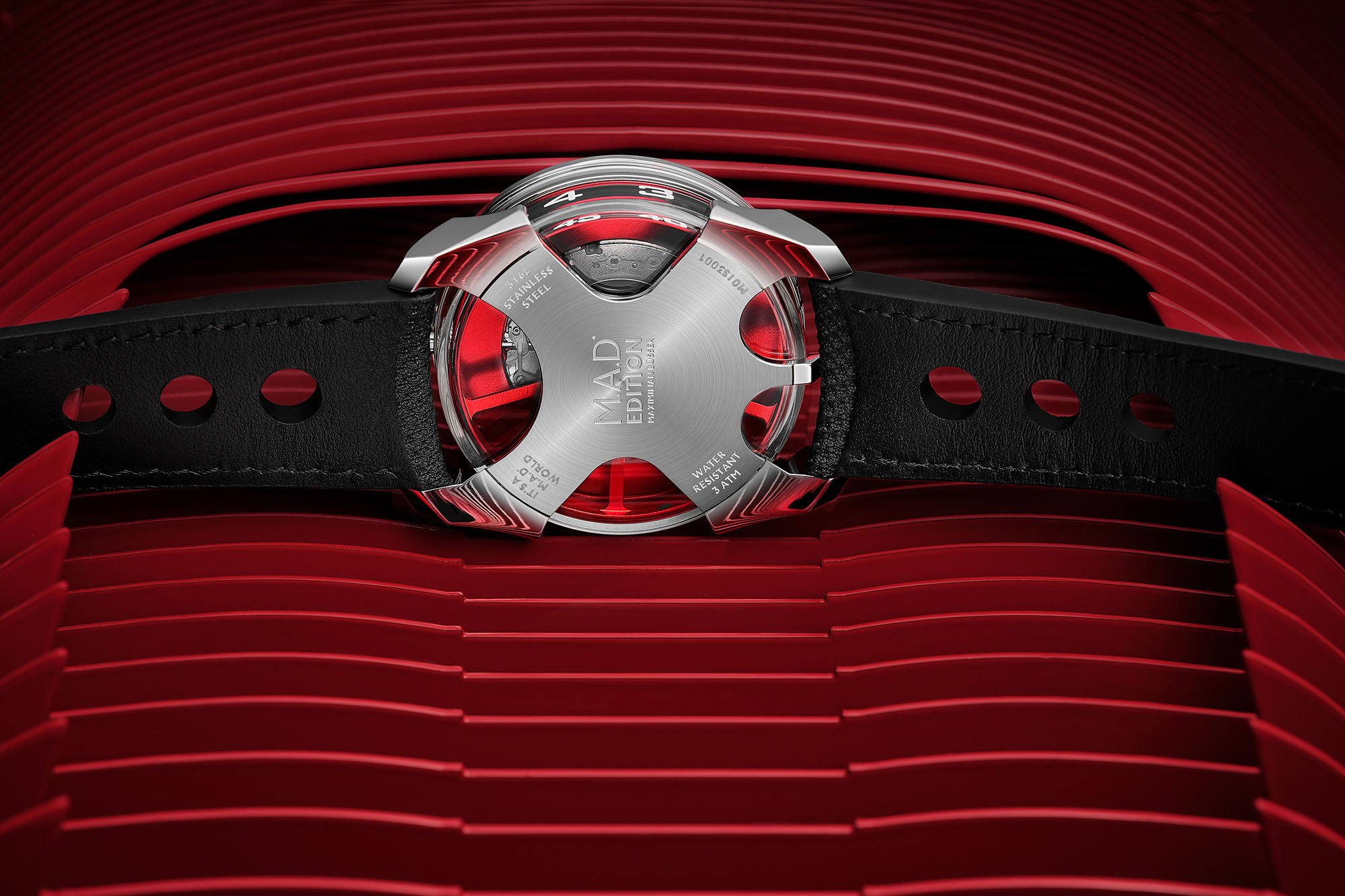 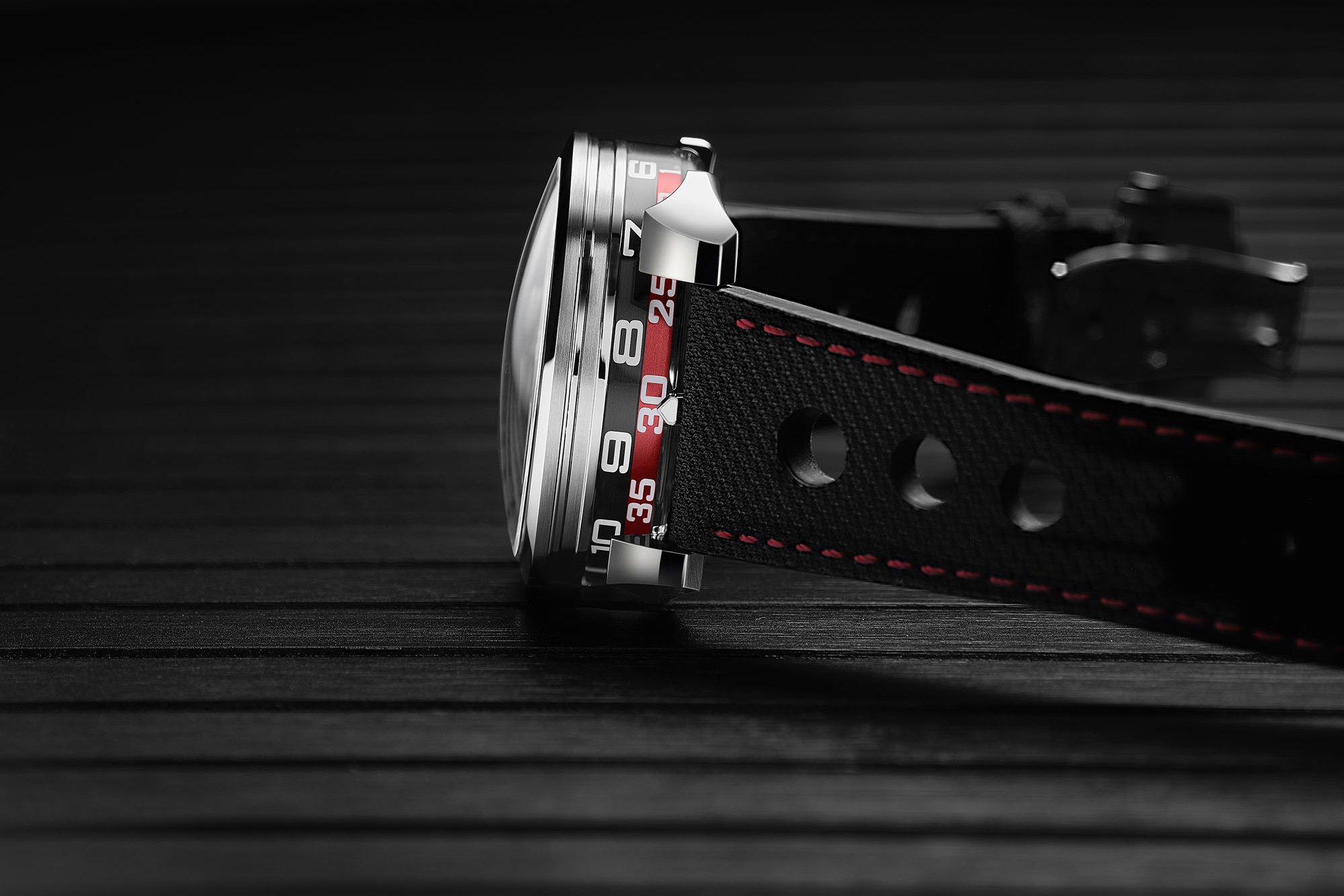 Hot Topics
Introducing: The New Seamaster Professional 300M 60 Years Of Bond — With A Special Animated Case Back
105 comments
Are You Still After An Omega × Swatch MoonSwatch?
85 comments
It’s Time To Invest In A Dress Watch — Our Picks From Breguet, Omega, Grand Seiko, And More
72 comments
The Rolex Waitlist Conundrum — How Much Will The Price Of Your Watch Increase While You Wait?
50 comments
The Best Omega Speedmaster Watches Of 2022
40 comments
Popular
Hands-On With the Seiko Prospex SRPC91K1 – Save The Ocean
Robert-Jan Broer
15
Speedmaster Speedy Tuesday 2 “Ultraman” – Out Now! (Live Pics and Video)
Robert-Jan Broer
32
You Asked Us: Rolex or Tudor
Gerard Nijenbrinks
9