Now that the watch is sorted, we really need to get to Mars
Balazs Ferenczi
comments 2
Share

The exploration of Mars has been part of scientific proposals for the better half of the 20th century. In his atelier in Russia, Konstantin Chaykin is doing his bit for the cause. And now, with the successful SpaceX launch still fresh in the memory, we’re able to welcome the Mars Conqueror Mk 3 Fighter to the fold.

How do these two things come together? The Mars Conqueror Mk 3 Fighter looks like something straight out of a ’90s sci-fi movie. I can just imagine this strapped to the wrist of Quaid (Schwarzenegger) from Total Recall. And I don’t mean this in a derogatory way. If you’re looking for an appropriately Martian watch, then this is it. But be quick! Chaykin will only make eight pieces.

There is still a long way to go before we reach Mars. But we have already found the perfect timepiece for the mission. The Mars Conqueror Mk 3 Fighter is, as its name suggests, neither the first nor the final watch in this collection. Konstantin Chaykin introduced his prototype, the Mars Conqueror Mk 1, a few years ago.

…created for usage in space.

That timepiece not only paved the way for the Mk3 but also introduced an array of complications. Said functions included synchronized Earth and Mars times, and a Mars date display using the Martian calendar. This complication shows the relative position of the Sun and a few other mind-boggling features. The long list of features made the Mk1 a super complicated mechanical piece. However, the importance of these complications lies in the fact that most of them have been specifically created for usage in space. 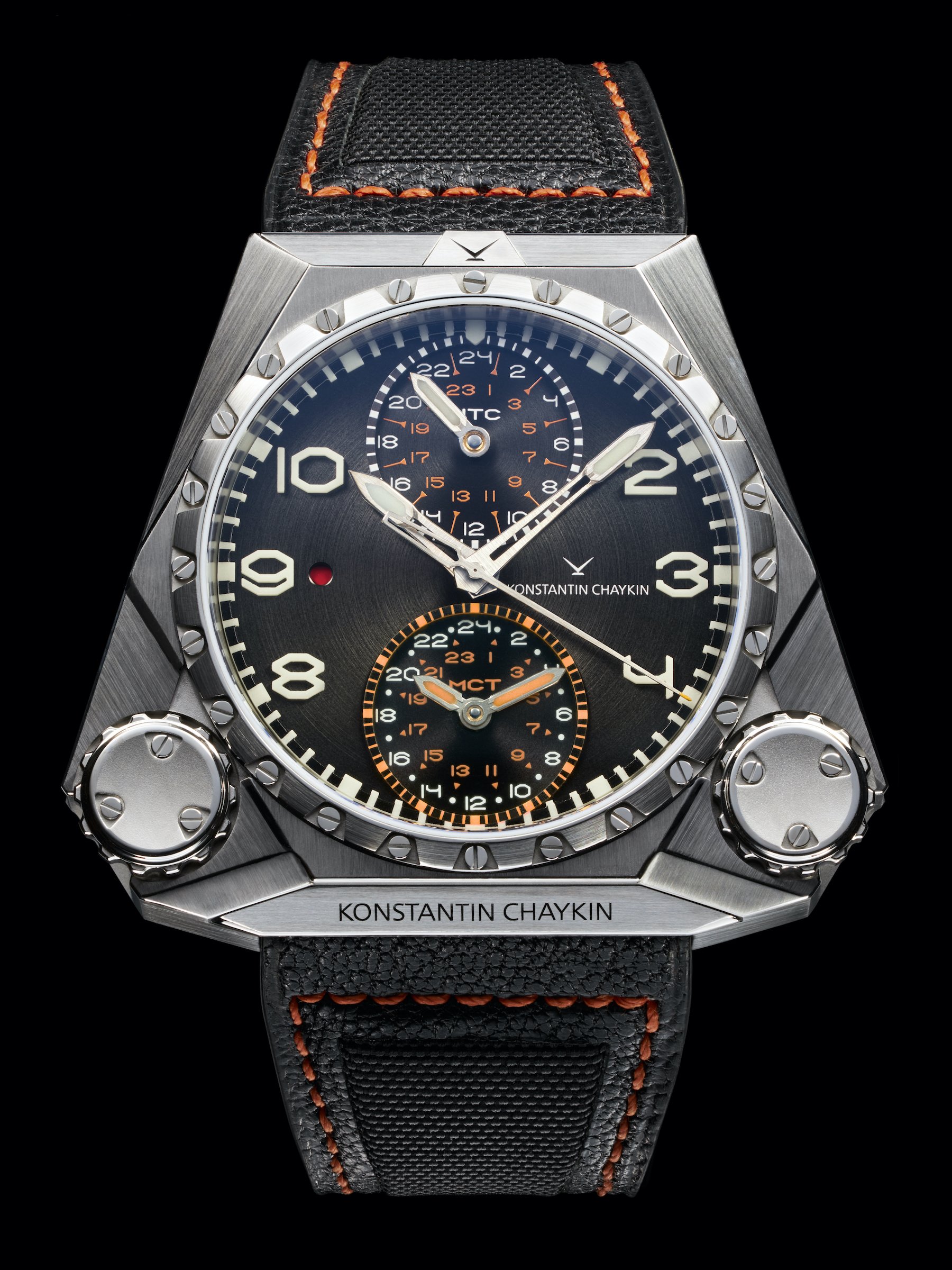 If you look at the Conqueror Mk3, you cannot help but notice its resemblance to another futuristic object. I am talking about Tesla’s Cybertruck. Look at those edges — the same, triangular-shaped brushed metal block. Well, it is no surprise that Chaykin and Tesla (and SpaceX) owner Elon Musk are both space fans. However, the Mars Conqueror Mk3 Fighter offers you much more than a bold and groundbreaking design.

…the watch has two vertical crowns.

Still, if we want to fully understand its functions, we have to go back in time. To 2009, when, for another project, Chaykin patented a system controlling the function of the winding crown. Basically, the watch has two vertical crowns. One winds the movement and sets the time. By adjusting the other, the owner can switch between modes. Where else have I seen similar layouts? On aircraft dashboards. Now you can’t unsee it. 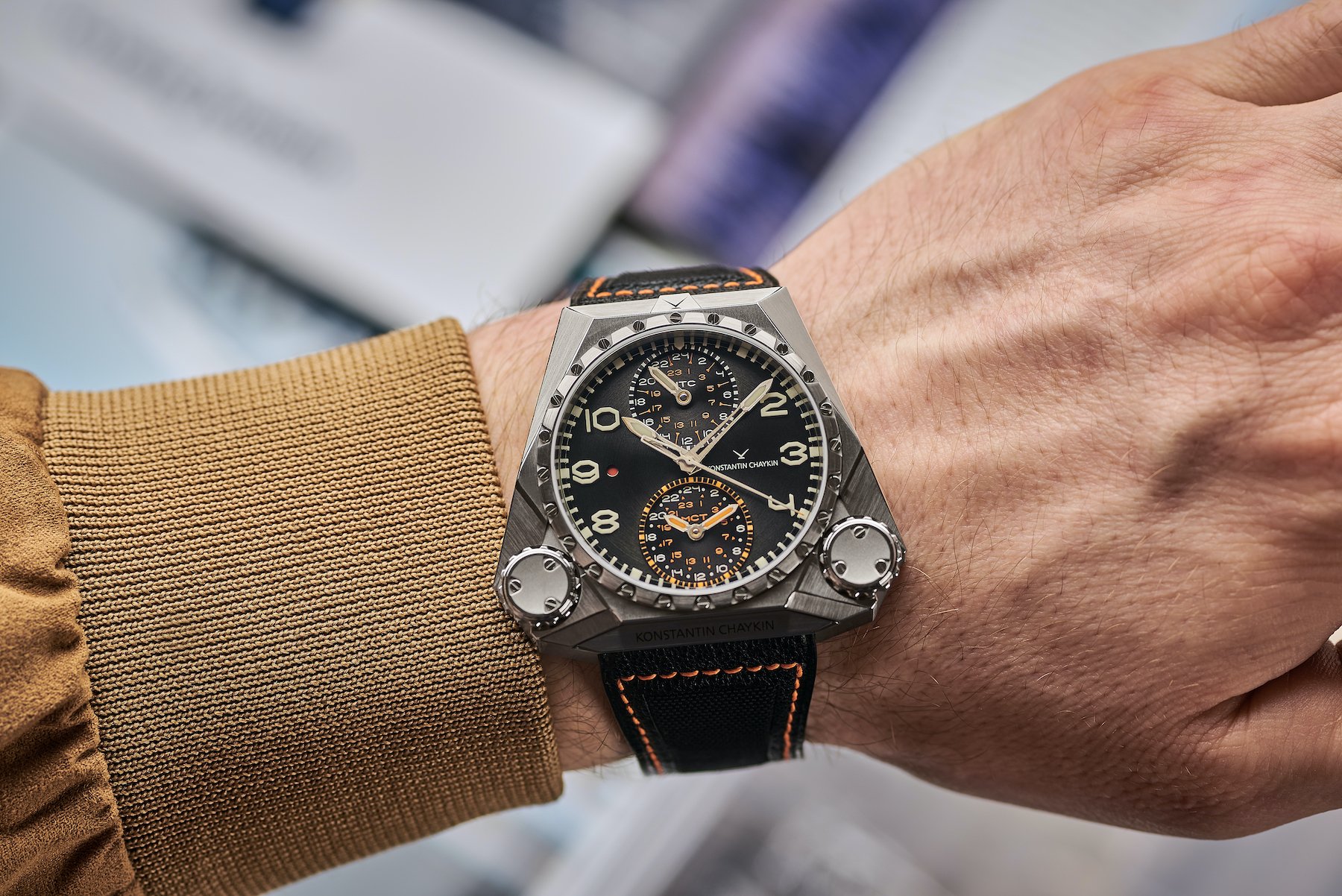 Konstantin Chaykin took inspiration from those Soviet airplane dashboard instruments. He has incorporated the patented invention from ’09 into the design of the Mars Conqueror Mk 3 Fighter. In fact, it forms the watch’s architectural foundation.

One can switch between 3 modes; manual winding of the movement, setting the UTC or MTC, and setting the local time. As such, the dial comprises the main face and two sub-dials. Firstly, the central hands show us terrestrial or local time. Here, you have three hands showing the hours, minutes, and seconds. Then, if you look at the sub-dial at 12, you find the UTC display. This is a 24-hour time zone indicator with only one hand.

Lastly, the sub-dial at 6 o’clock is for the MTC or Martian time, again, showing hours and minutes. To see what mode you are in, Chaykin added an indicator at 9 o’clock. You can set the modes and every dial using the two crowns. 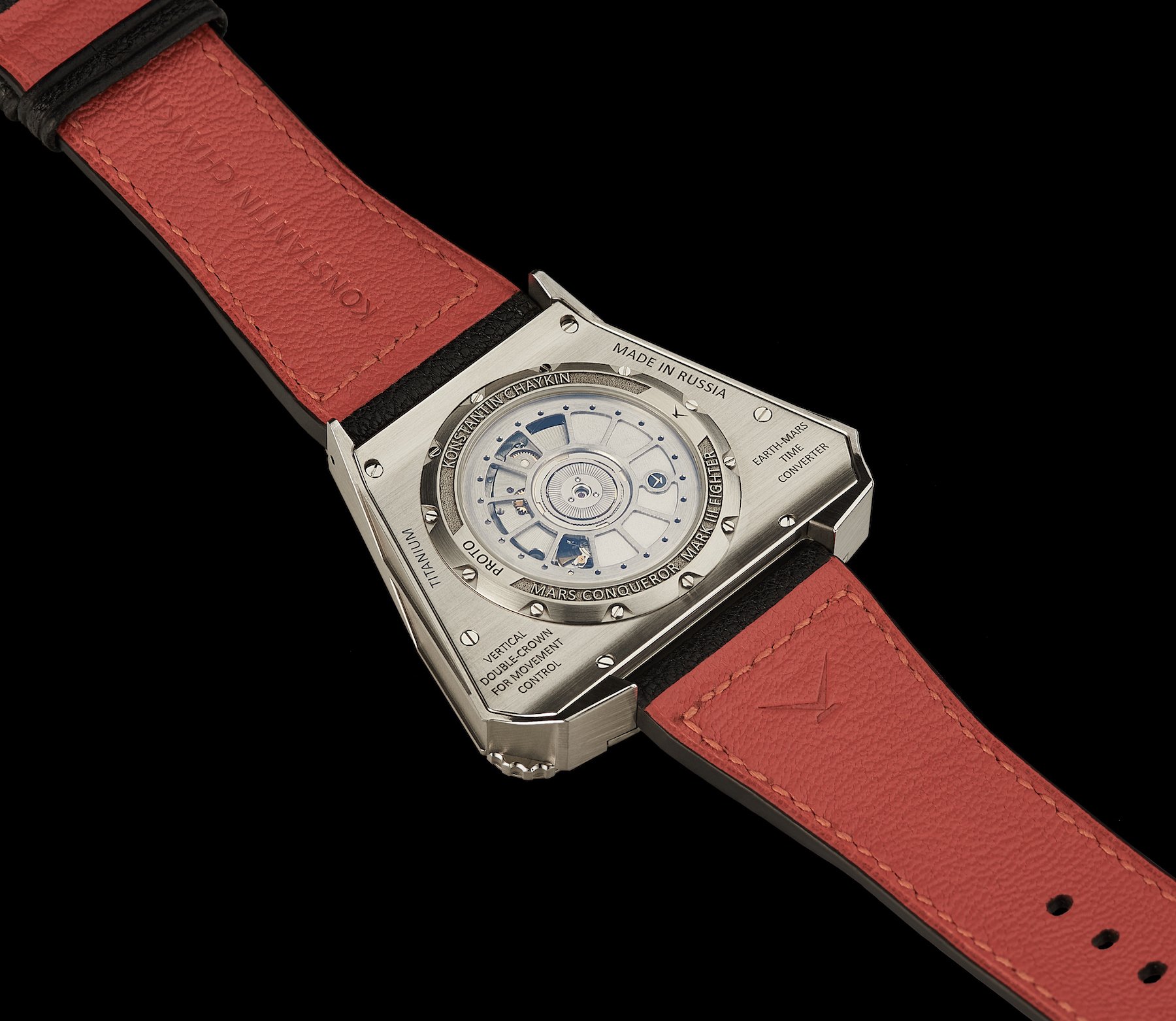 The trapezoid case shape might not be the best of choice for a mission watch. Yet, it works well with this timepiece. Not to mention the 24 screws around the bezel. They resemble the mooring lock of a spaceship. Speaking of which, the Mars Conqueror Mk 3 Fighter’s case is titanium with a sapphire display case back. Through that, you can admire the ETA2893-2 base movement that Konstantin Chaykin modified.

We are fans of this futuristic Mars mission watch. What about you?

Finally, to mark the introduction of its first Martian aviator watch, the brand decided to design appropriate hands for the new timepiece. These so-called, Starship Hands resemble the shape of a rocket. There still are many other details about the Mars Conqueror Mk 3 Fighter that require exploration so we will do our best to get one in for a hands-on review. We are fans of this futuristic Mars mission watch. What about you? If you’d like to visit Konstantin Chaykin’s site, please click here.