Since I live in Geneva, I got the opportunity to stop by Antiquorum and check out some of the watches in the house’s upcoming May auction. They tend to have large catalogs so I do recommend looking through this one in advance or you might miss something cool as I have several times in the past.

Antiquorum has just finished its Hong Kong sale and, overall, it looked like strong results across the board. I went back over it and was surprised as they sold some things well over what I expected. It is always interesting to see what kind of momentum auction houses carry from one country to another in the same season. I think it will do well, but auctions are always a bit of a gamble. Hence, the fun of following them.

To take a look at the upcoming Antiquorum Geneva online catalog, you can click directly here.

This Antiquorum watch auction, which takes place on Sunday, May 9th in Geneva, is comprised of 535 lots (same as their previous sale) and has a total estimated value of about 7.5 million Swiss Francs at the low estimate. As usual, I like to write about these auctions because there is always a bit of everything and across all budgets, buyers can find something interesting. I enjoy researching a bit on watches I am not familiar with, find interesting and also may symbolize some larger market trends.

So, here they are: 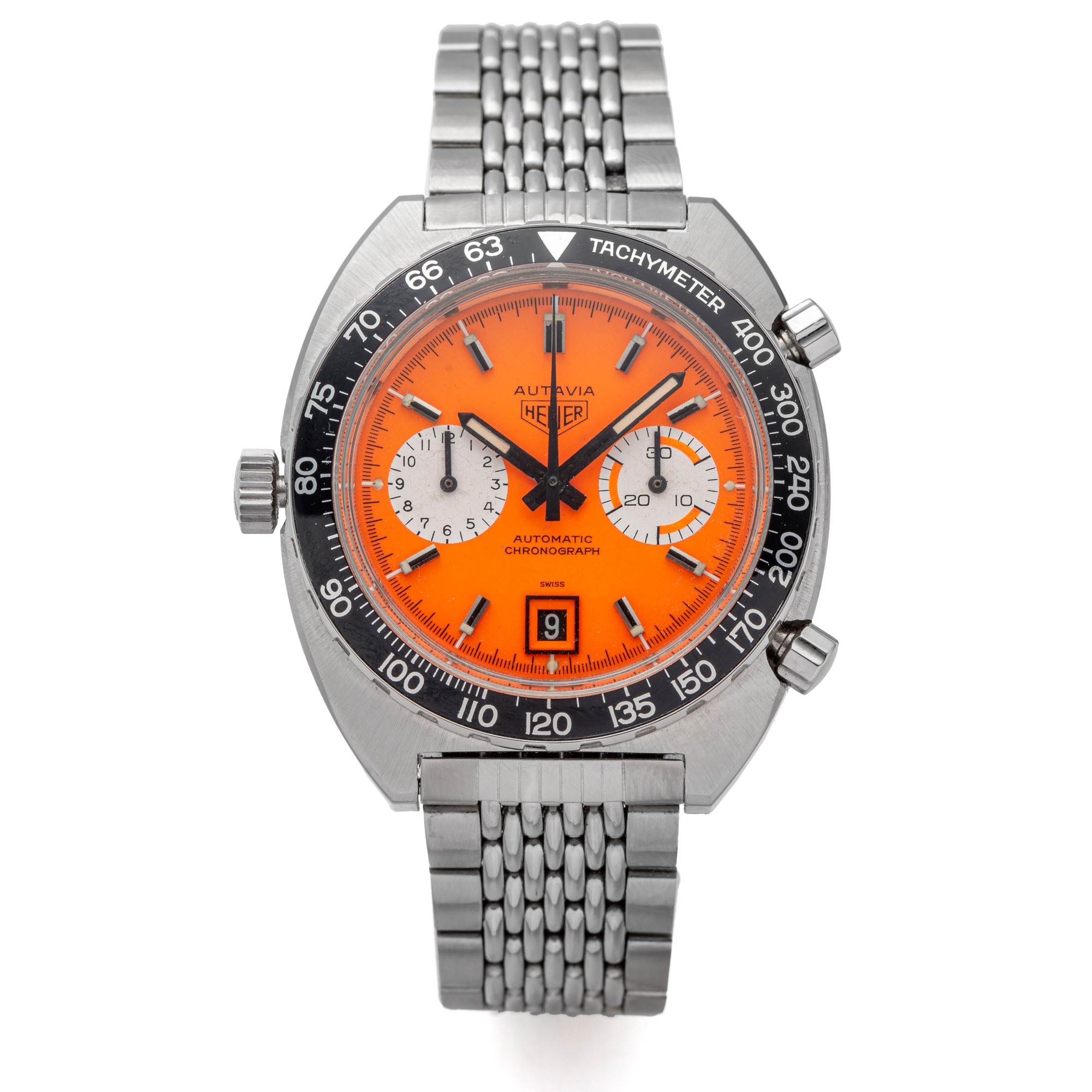 Over the years, I have maybe seen or heard of a couple of these uber-rare orange dial Autavias. Maybe seen just one in person before and the other was just in photos. In any case, to say the least, these are extremely rare.

Now, I know we all get annoyed with the overused/misused term ‘prototype’ and I think I rather call this an exotic dial, but since it never made it to regular production its blurry. Other brands like Rolex and Omega were offering special exotic dials (not featured in their catalogs) for their sports models in the late 1960s and early 1970s to boost sales. Famously, Rolex Daytonas had several variants of exotic dials known today as Paul Newman dials. Omega experimented with their so-called ‘Racing’ dials also called exotic dials way back when. So, it’s no surprise Heuer would have done the same.

The purpose of making a bright orange dial could be for use at night or in darker settings, just like Doxa diving watches had orange dials for visibility in dark/deep water. Nighttime races like the 24 Hours of Le Mans could have been an ideal place to have such a watch on the wrist.

Also, why this dial never made it to production? I couldn’t say. I think it looks great and really cool on the wrist. You have to like orange, cause there’s a lot of it and it’s a bright tone of orange too.

On a more technical note, I vaguely remembered a discussion years ago that this dial was found fitted with a special caliber 11 that had a higher frequency than the normal one. I had this watch tested out of curiosity when I went to visit and it runs at the usual 19,800 frequency. Sorry, no special high-beat movement here. Granted, the watch was overhauled by Heuer in 2007 (receipt comes with the watch) and it could be that the escapement was replaced then and brought back to regular spec. The reality is that so few of these have been observed, it’s almost impossible to draw any conclusions.

In any case, the estimate seems reasonable and should leave room for a little bidding fun. 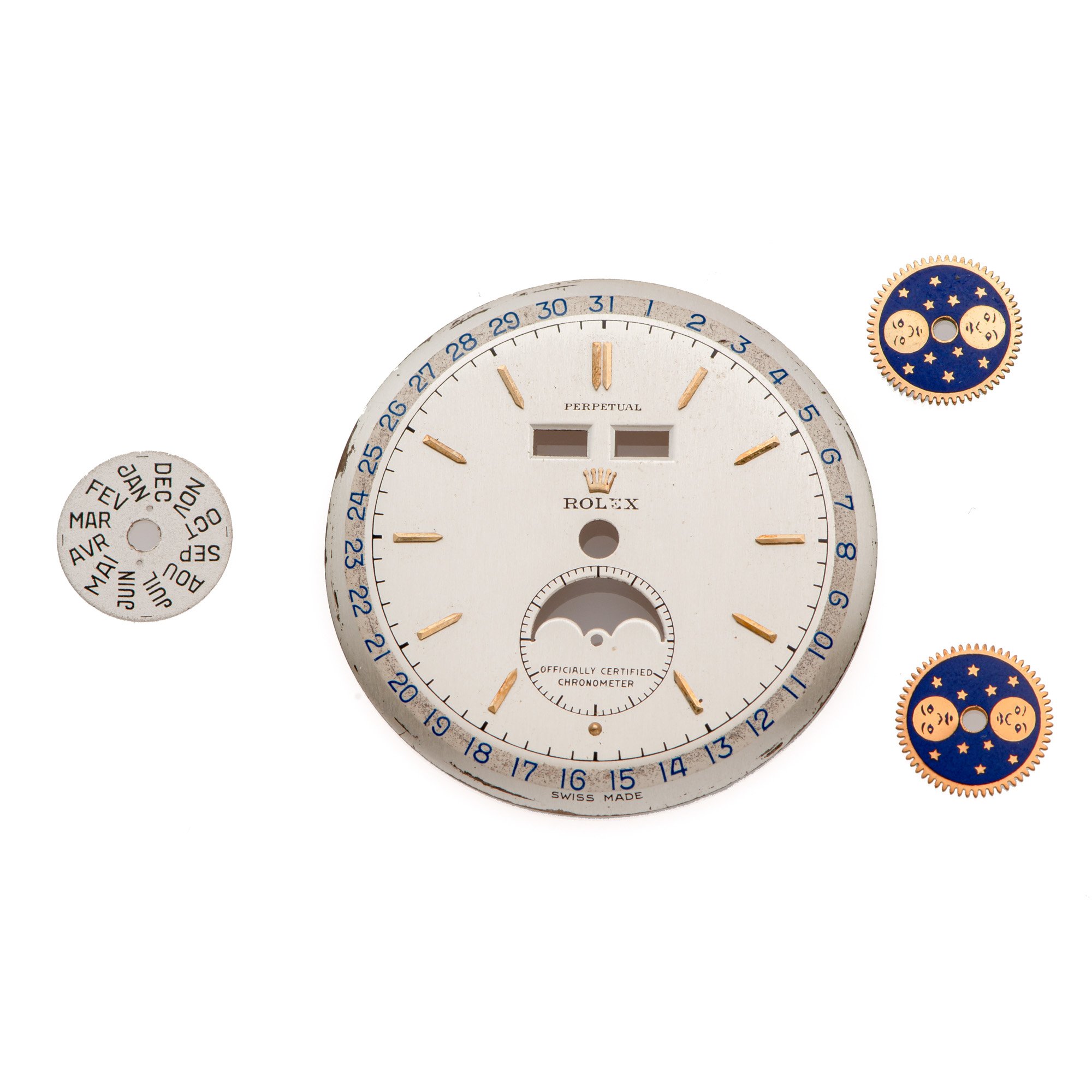 At first glance, I looked at this dial amidst several lots of parts, and thought ok cool, and kept on flipping the pages. Then I paused, and came back and thought “hmmm, that’s interesting”.

Again, some things really require a closer look to see just how rare and cool they are. Big catalogs aren’t always the easiest for this, but it’s part of the fun to hunt for hidden gems.

A Rolex 8171 triple calendar moon phase is a rare complication, made in both steel and gold versions, from a company that notoriously kept their watches simple on purpose. Not only are these watches incredibly rare, but spare parts for them are also almost unheard of. According to Antiquorum, several lots before and after this one came from a single consignor that is a retired watchmaker that used to work for Rolex. What a dream to hear something like that!

This dial is particularly interesting of course and in addition to its spectacular condition with the two-tone aspect of the dial perfectly preserved, the configuration is one that Antiquorum and other experts have never seen before. All of the dials observed have a Rolex coronet applied logo, Rolex printed and the word perpetual. Scholarship tells us that most dials for steel examples usually say “Precision” on them and the ones intended for gold cases usually have the “Officially Certified Chronometer”. So far, so good. Where this dial differs from any seen elsewhere is the Rolex coronet logo is found below the day/month windows, while on all other examples it is on top and the single word “Perpetual” is found at the top of the dial. This highly unusual configuration is possibly unique and for an already rare spare part, it’s a pretty cool thing to see at the auction these days. I would also suggest having a look at the other spare parts lots, particularly Lot 263 as one might discover some additional 8171 discs in the box along with original dial cliches. 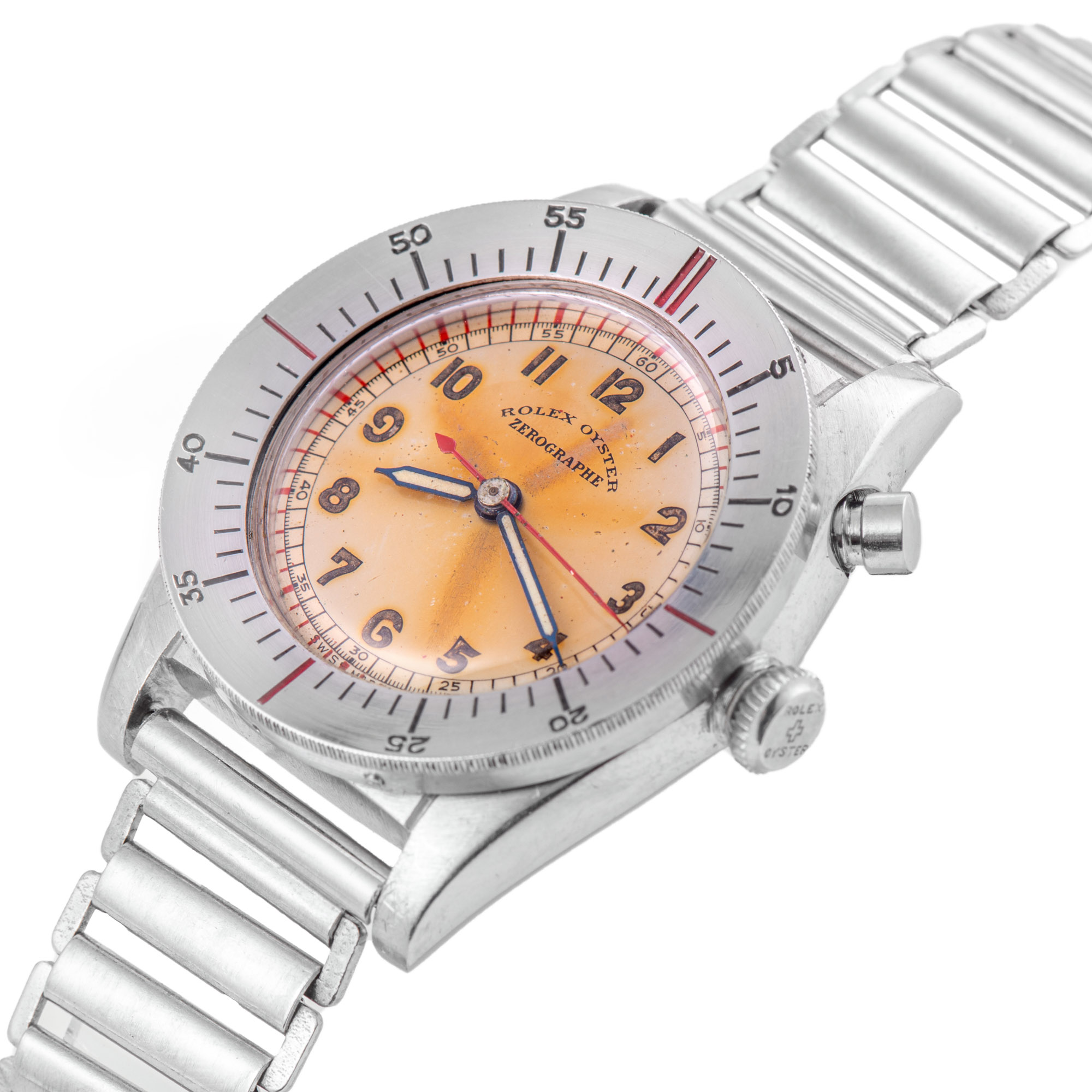 I’m sure all of us are familiar with this model from Rolex, but just in case any of you were asleep that day, I will recap.

The 3346 Zerographe features a flyback resetting seconds mechanism with the use of the pusher at 2 o’clock. Only a dozen examples have ever surfaced, and the ones observed thus far have a very tight serial range. These watches date to around 1937, so just before WWII, and might have likely been a small batch of test watches that never made it into full-blown commercial production. They are modestly sized at 32mm, but impressive to see in person.

This particular example came from the family of the original owner and was found during the cleaning of their grandmother’s apartment. The local Genevan family did some research and their uncle had, before retiring, briefly worked at Rolex. I’m assuming we are talking about their grandmother’s uncle. In any case, finding a family heirloom so well preserved and such an incredibly rare piece must be thrilling. 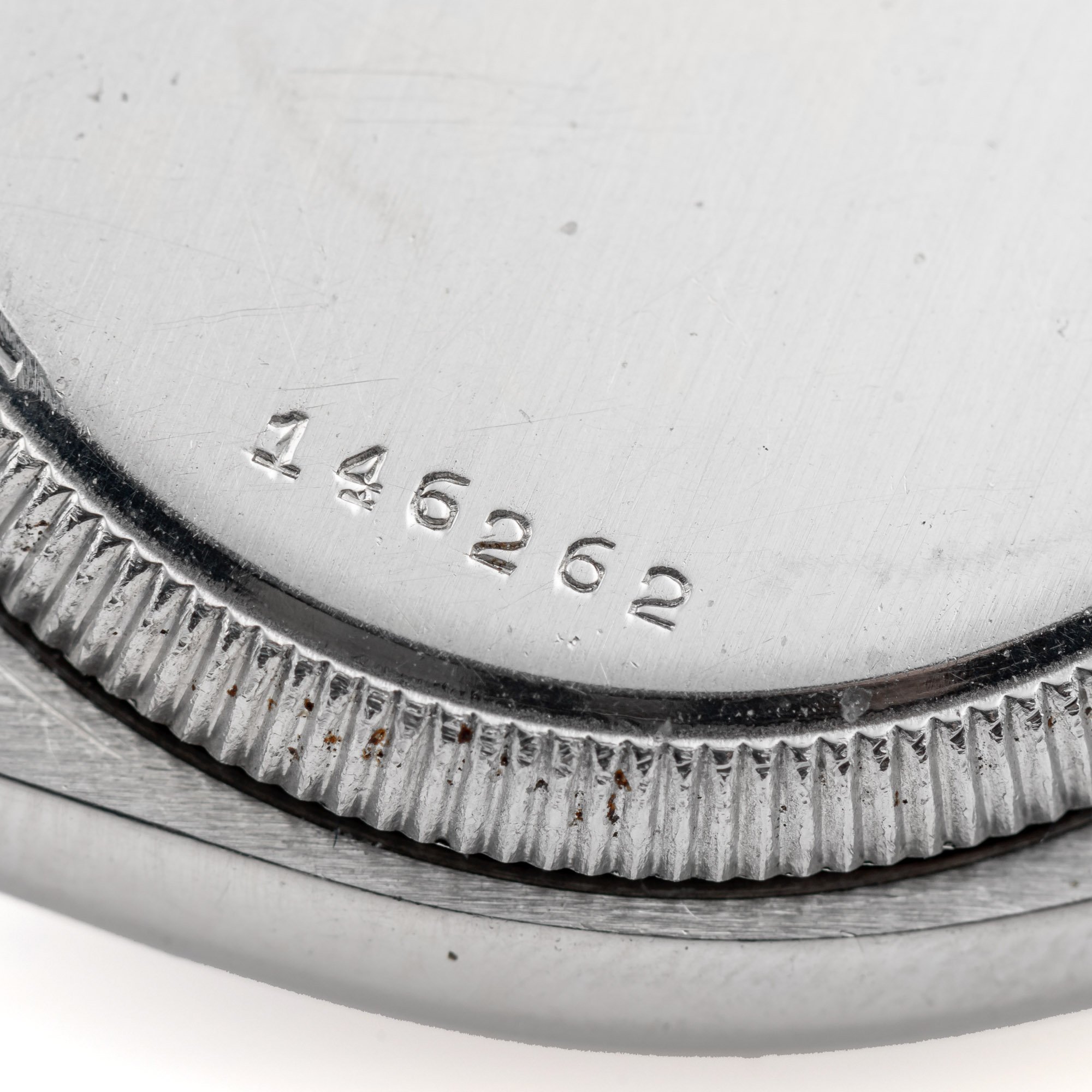 One little detail that Antiquorum brought to my attention was that the last 3 digits of the serial number found on the case back are also hand engraved on the underside of the bezel. Something, I would have never seen or thought to look for. However, it definitely attests to the originality of the watch. The essay on this lot is pretty complete and you will find the link to it below, so I won’t ramble on much longer.

I admit, I often get the question about the watches we sell at our shop about whether there is a story behind it and if it came from the original owner, etc. Sadly, so much of the vintage watches we see today have already traded hands several times and often their stories are all but forgotten. I would like to do a better job myself of documenting some of these incredible stories and make sure they accompany the watches in the future. Just me kicking around some ideas in my head. Meanwhile, I hope this lot gets a well-deserved good result and the family is happy with their discovery. 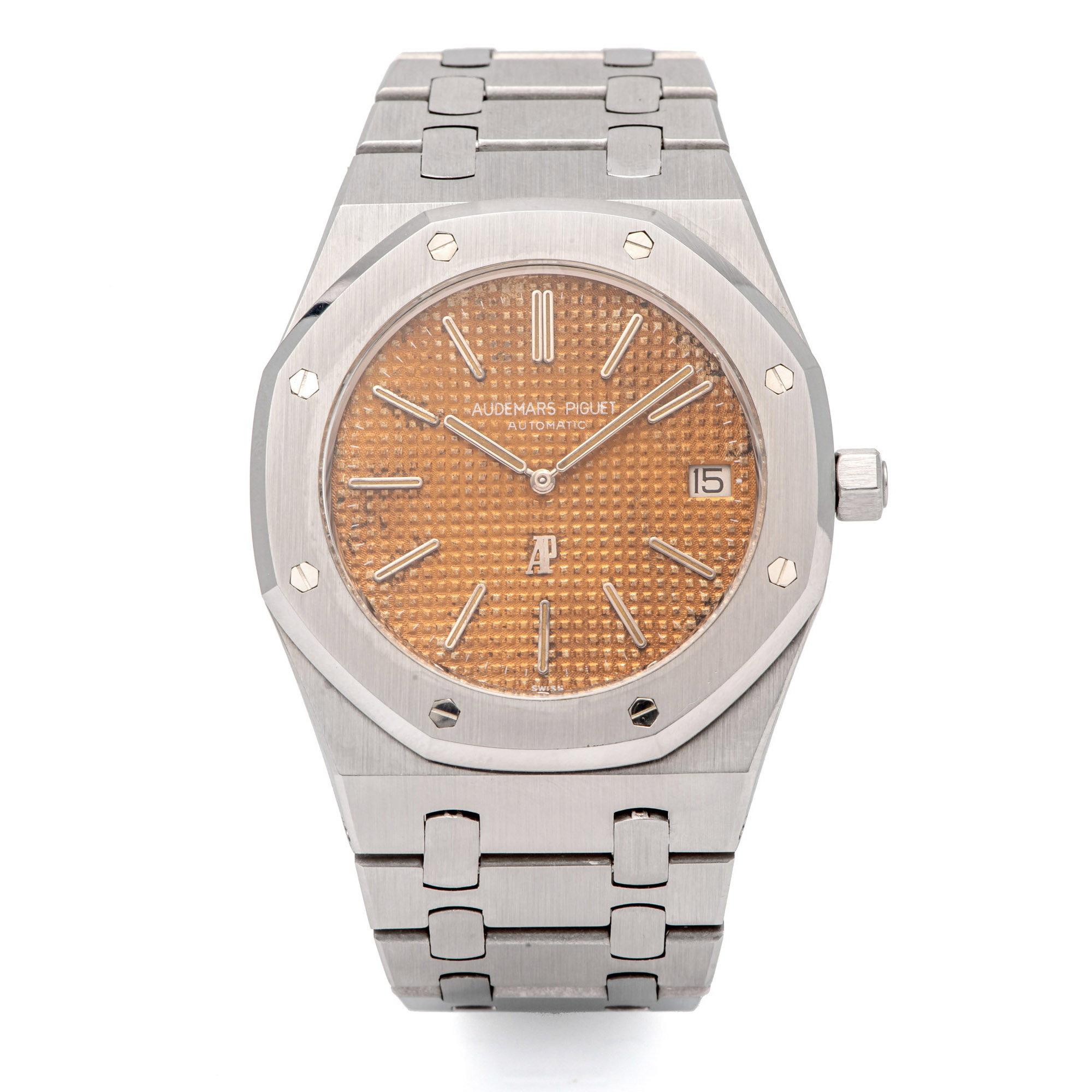 It is no secret that the AP Royal Oak is at its prime. The octagonal bezel luxury sports watch in almost every diameter and configuration is ultra-hot right now. Where better to begin with the first Royal Oak reference 5402 launched in 1972 and designed by the late Gerald Genta. It is fitted with the ultra-thin automatic caliber 2121 from the famous JLC 920 ebauche never used by Jaeger-LeCoultre, but delivered as an ebauche to Patek Philippe, Vacheron Constantin, and Audemars Piguet. And within the 5402 series produced within batches starting with letters (A to D) followed by individual numbers, none are more prized by collectors than the early A series (under A1xxx).

The example up for sale here is all of those things and has a tropical (color change) dial to boot. Many of these dials oxidized and would turn from blue to a golden brown color, but rarely did so evenly and across the whole surface of the dial. I have to admit this example looks great and really is stunning in person. 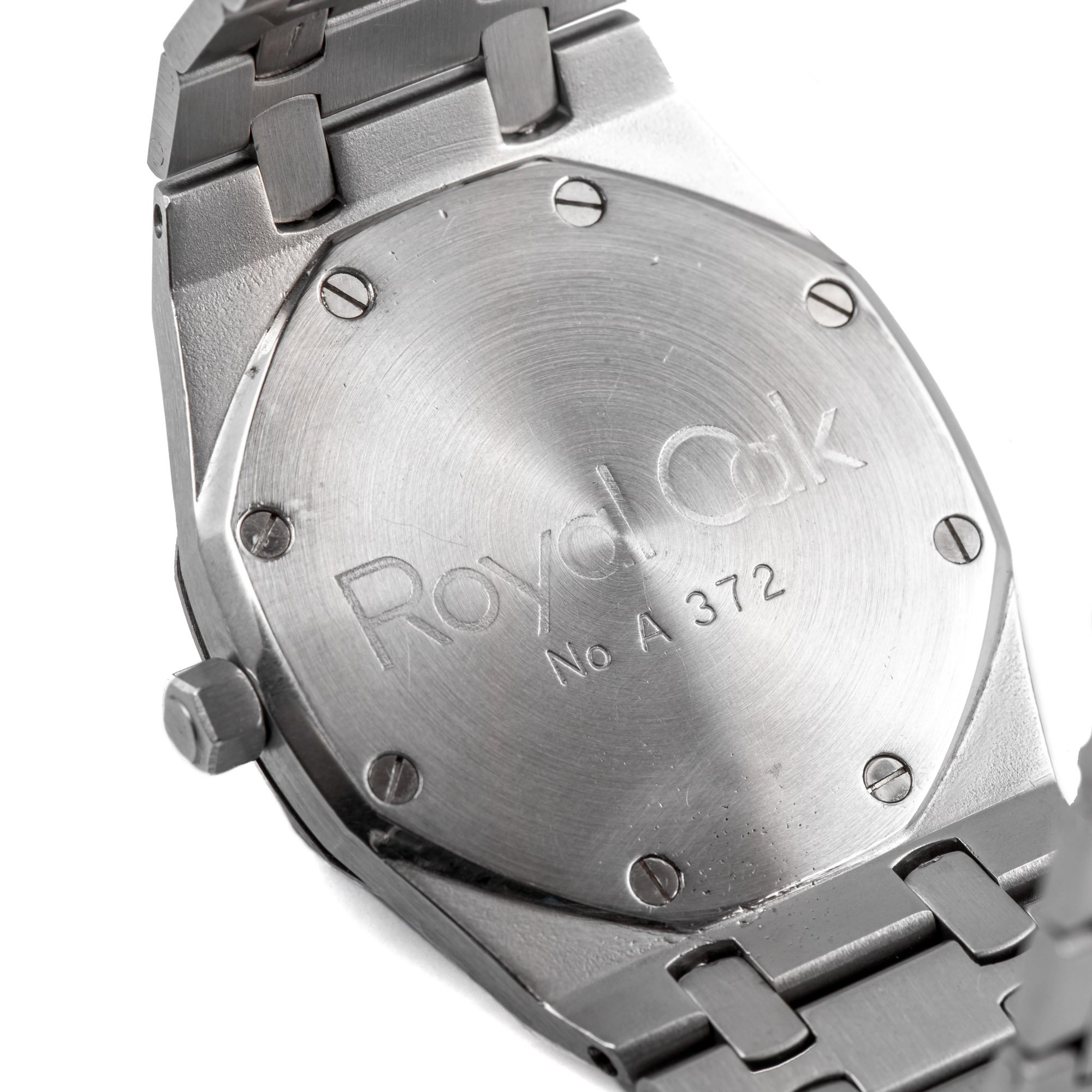 The success of the Royal Oak and its sharp rise in pricing on the secondary market followed that of the Patek Philippe Nautilus. With that in mind, every time we previously assumed the Nautilus had reached a peak, prices again rose. So, I wouldn’t be surprised if we see the same phenomenon with the Royal Oak. With only a few thousand pieces having ever been made of the 5402, there are not enough to go around, so like other watches of its kind, I think these will become increasingly more difficult to find in the wild or come up for sale. I expect prices of today, which some of us find already to be outrageously high, could be dwarfed in the future and even seem low. Just my opinion. The only critical note on this particular watch is that the movement number does not match the reference, meaning it was likely assembled outside the AP workshops.

On a closing note, I was not and will not be remunerated for this article by FratelloWatches Magazine or Antiquorum and write in my spare time because I actually enjoy writing about watches. I also have the distinct advantage of living in Geneva, Switzerland. None of the aforementioned watches belong to me and I do not know any of the consignors. I am not plugging mine or my friends’ watches or anything of the sort. Not having skin in the game allows me the pleasure of being blunt and saying whatever comes to mind. Hope you enjoyed the article, and any future suggestions are always welcome.

Hot Topics
RJ’s Top Five Alternatives To The Omega Speedmaster Professional
96 comments
We Need Luxury Solar-Powered Quartz Watches From Rolex, Omega, Breitling, And Grand Seiko
70 comments
The Omega Speedmaster On The Big Screen — Watch Spotting At The Movies
69 comments
Above And Beyond: When And Why Paying Over Retail For A Watch Makes Sense
63 comments
The King Seiko Collection Debuts With Incredibly Wearable Watches
44 comments
Popular
Speedy Tuesday – Olympic Games 2020 Speedmaster For the Japan Market
Robert-Jan Broer
3
You Asked Us: Nomos Orion as a dress watch?
Gerard Nijenbrinks
2
Hands-On With The Seiko SLA019J1 Marinemaster
Robert-Jan Broer
1