Is it really a clock? Or is it The Six Million Dollar Man's eye that sees all?
Lex Stolk
comments 5
Share

The Orb, available in either black or white, is MB&F’s 14th clock co-created with L’Epée 1839. Both versions look “the bomb”. Especially the black one. It looks a bit like an old-fashioned bomb you can find in an old cartoon. And the white version looks like an eyeball! But joking aside, these days, table clocks are a rarity. This may be due to us spending so much time in the office — don’t look at the time in the lower right corner of your computer screen! But the MB&F × L’Epée 1839 Orb takes this now-obscure object and guides it into modern times. Nowadays, a clock is an objet d’art that can enrich your horological life.

You don’t see many clocks here on Fratello. But when they appear, these clocks are worth a look. It’s good to change up the theme of time from time to time, as it broadens our horological horizons. You don’t look at a clock the way you look at a watch. A table clock is a very private affair. It’s not something you take with you, but you keep in a room. And even travel clocks are a personal pleasure, as they’re only exposed to their trusted travel companions. Whether you keep your clock at home or in an office, the people who’ll get to see it are way more limited than those who’ll have a chance to take a peek at your watch. Clocks are very private objects of passion. You buy a clock to enjoy it, not to show off. 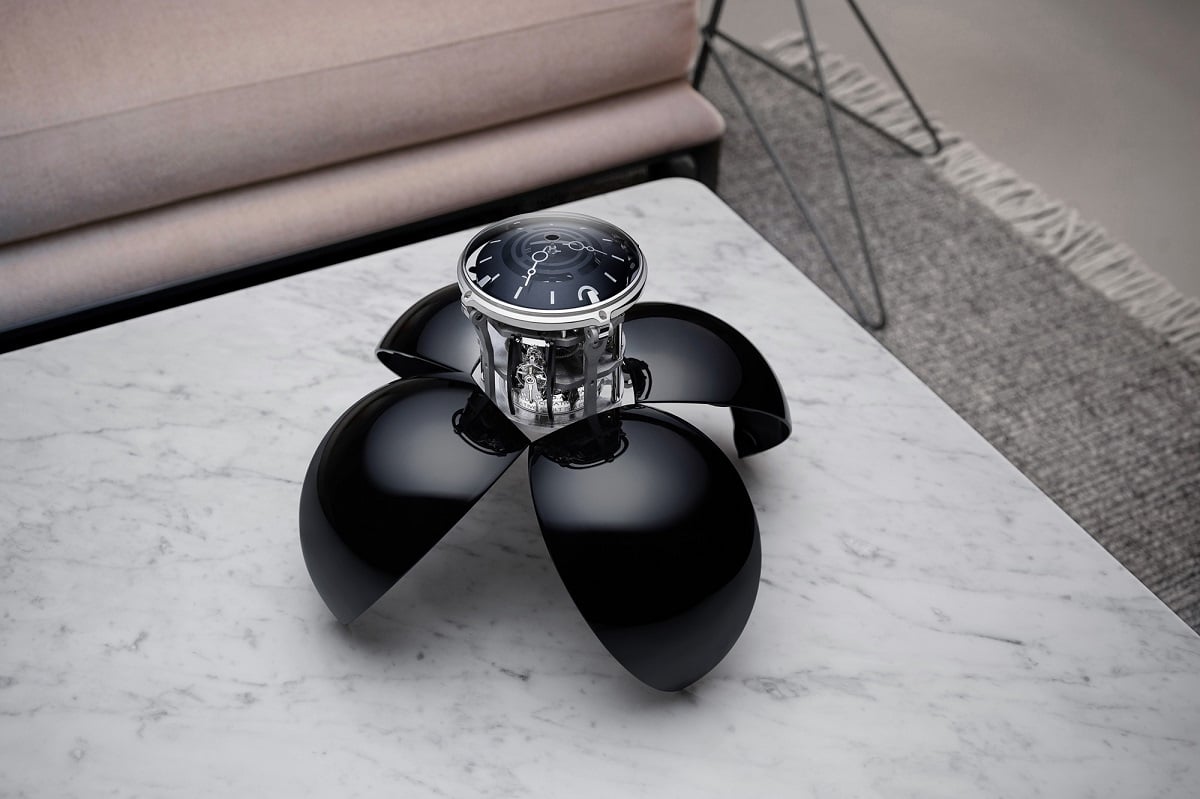 The MB&F × L’Epée 1839 Orb is only the third new clock to appear on Fratello this year. Maybe you remember the wobbly and transparent Ulysse Nardin UFO in its domed glass bubble. If not, you might have seen the unique Patek Philippe’s complicated desk clock for Only Watch. Last year we showed you the Starfleet Explorer that MB&F made together with L’Epée 1839. The Orb, however, is more of an introvert’s treasure.

… although the Orb’s looks are minimalist, it really is not.

At first glance, the Orb looks almost like a bionic eye — remember The Six Million Dollar Man? — with its smooth and shiny, perfectly formed sphere. And although the Orb’s looks are minimalist, it really is not. The Orb opens like a beetle opens its four protective covers, or elytra, so it can use the wings underneath. But the Orb’s four elytra not only open up, they can also swivel to display the clock in a variety of different positions. 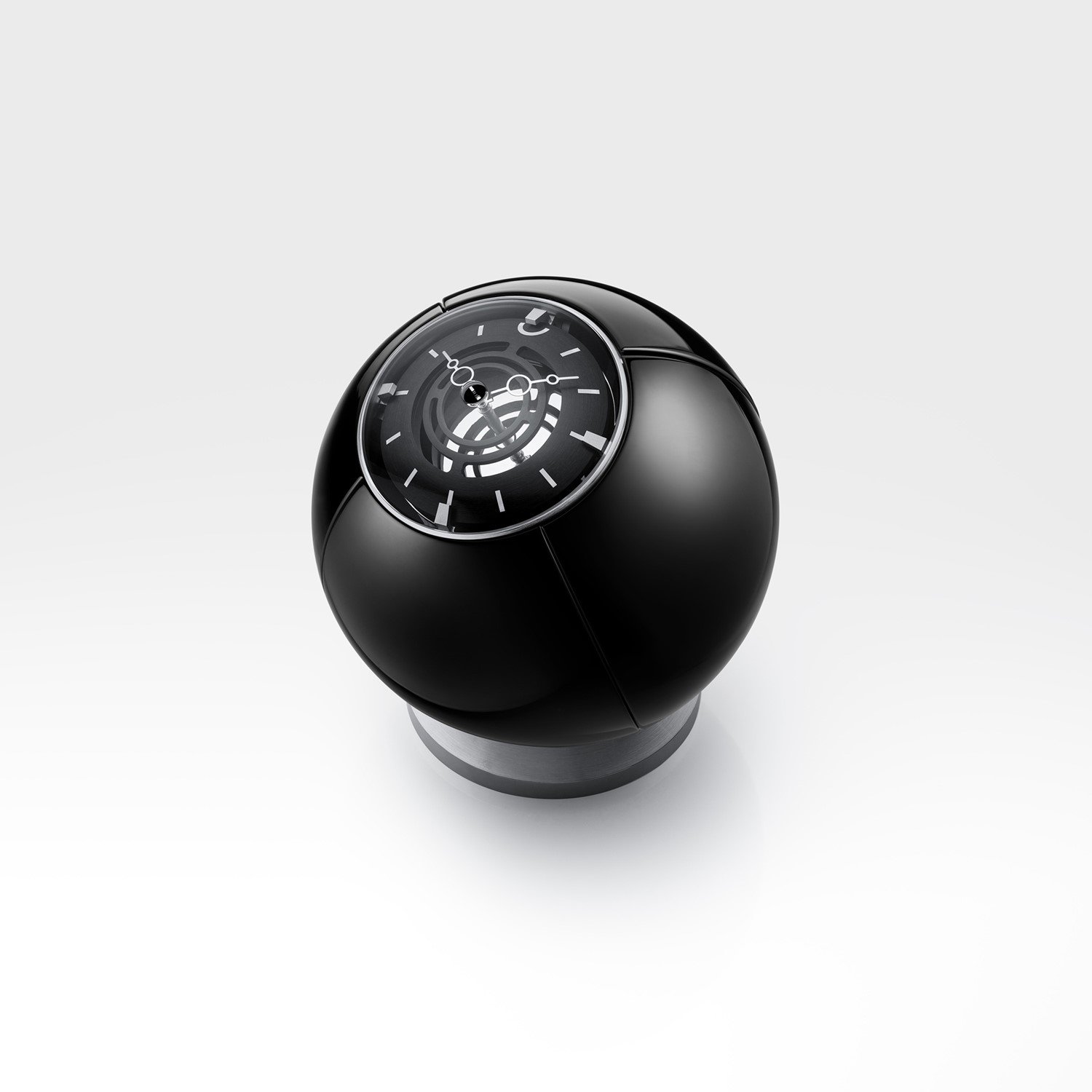 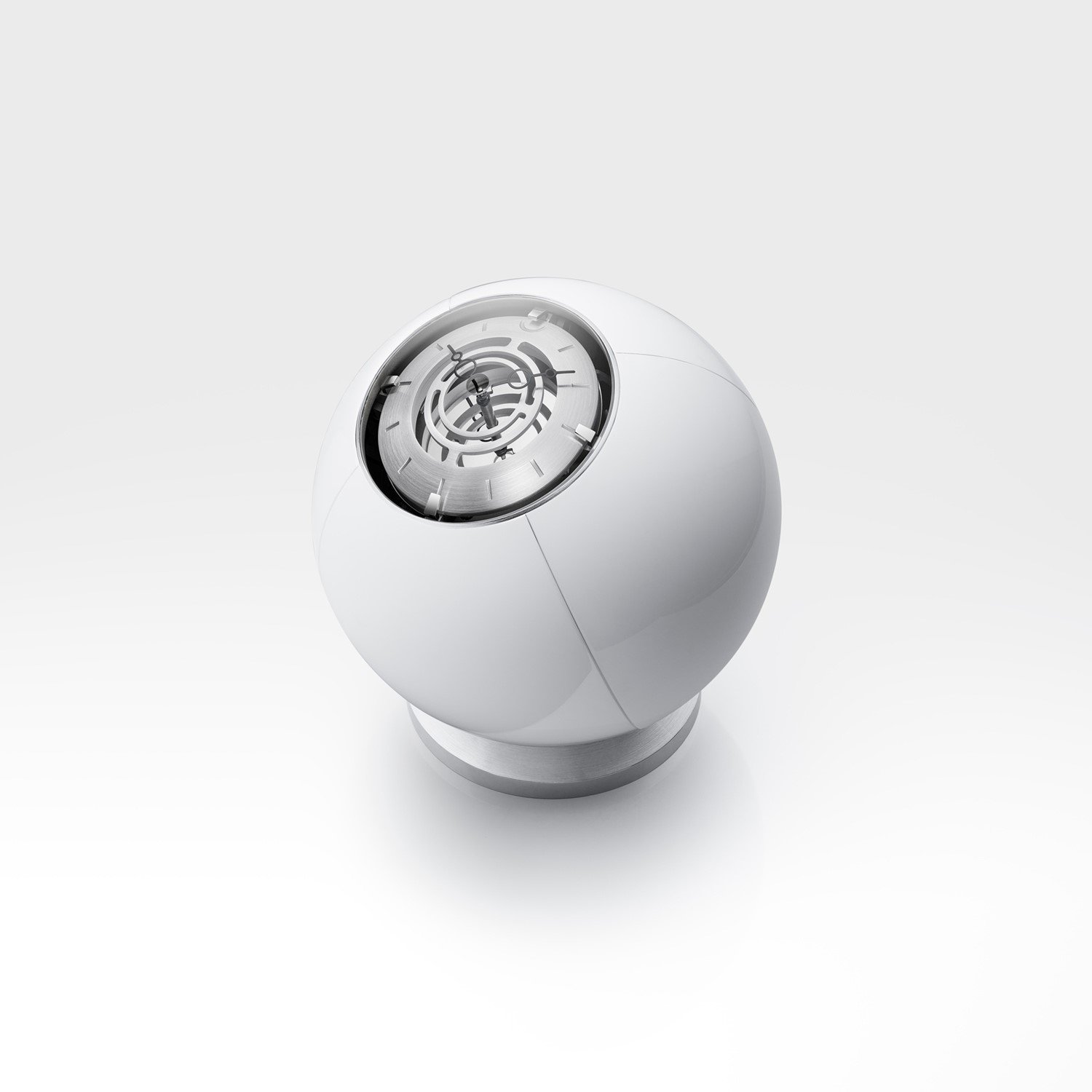 It won’t roll off the table

When fully round in the most “defensive” position, the Orb doesn’t roll off the table because of a special saucer. You can choose to open one, two, three, or four elytra, giving the clock a variety of completely different looks. So for CHF 28,500 + VAT you basically get five different clocks; you do the math if that helps in convincing yourself that you need an Orb in your life. 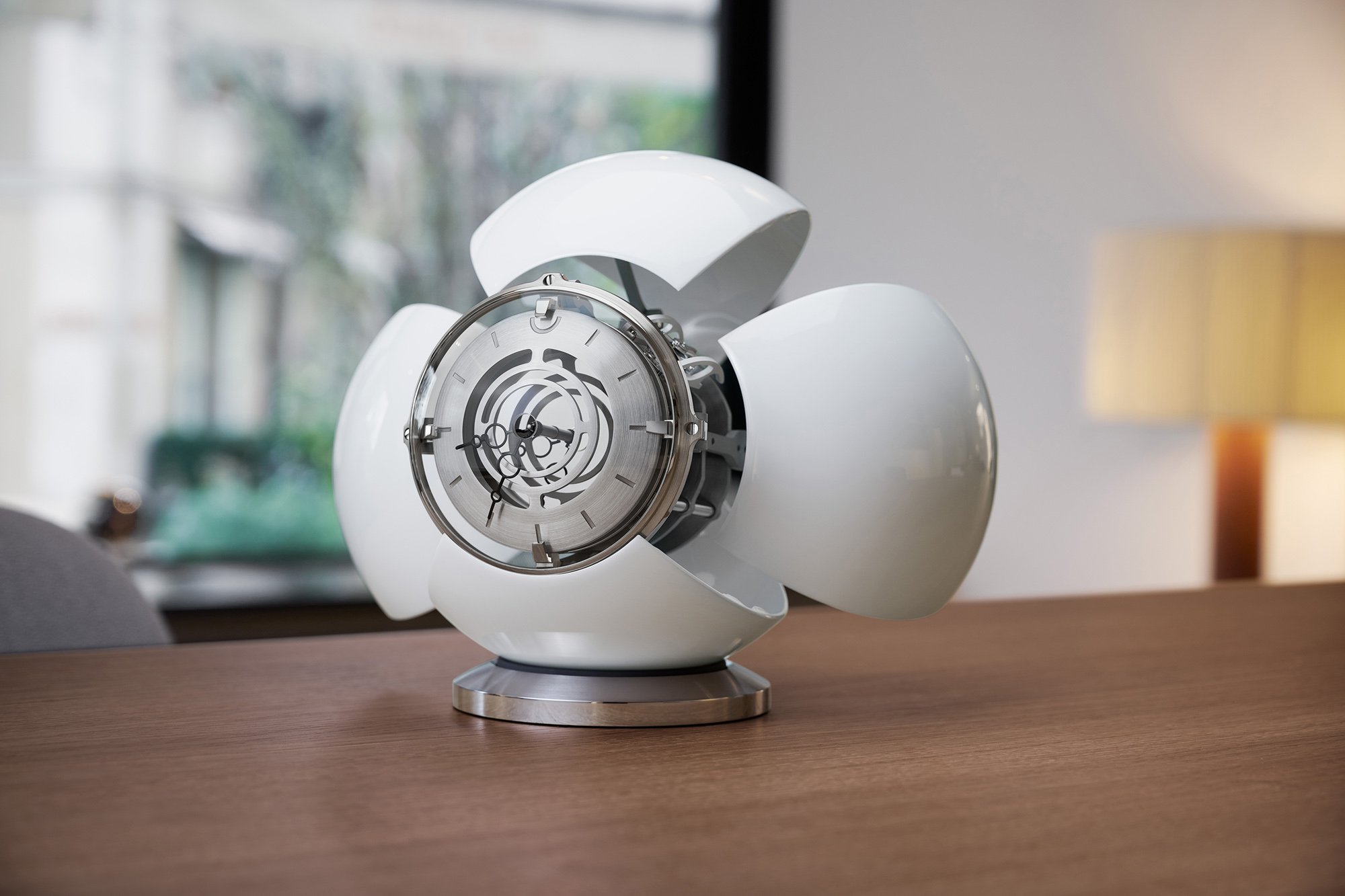 Inside the Orb you will find a finely finished and beautiful L’Epée movement with an eight-day power reserve. The movement has two independently wound barrels. One drives the time, while the other powers an hour-striking mechanism. Now that’s a pleasant surprise! Its understated looks are paired with a very complicated movement which delivers a very practical function. The clock not only chimes the passage of the hour, but it also indicates the actual hour, as a church clock would do. It’s a romantic, perhaps even archaic function in these days of beeping alarms. But as enthusiasts of horology, who doesn’t love a little romance? 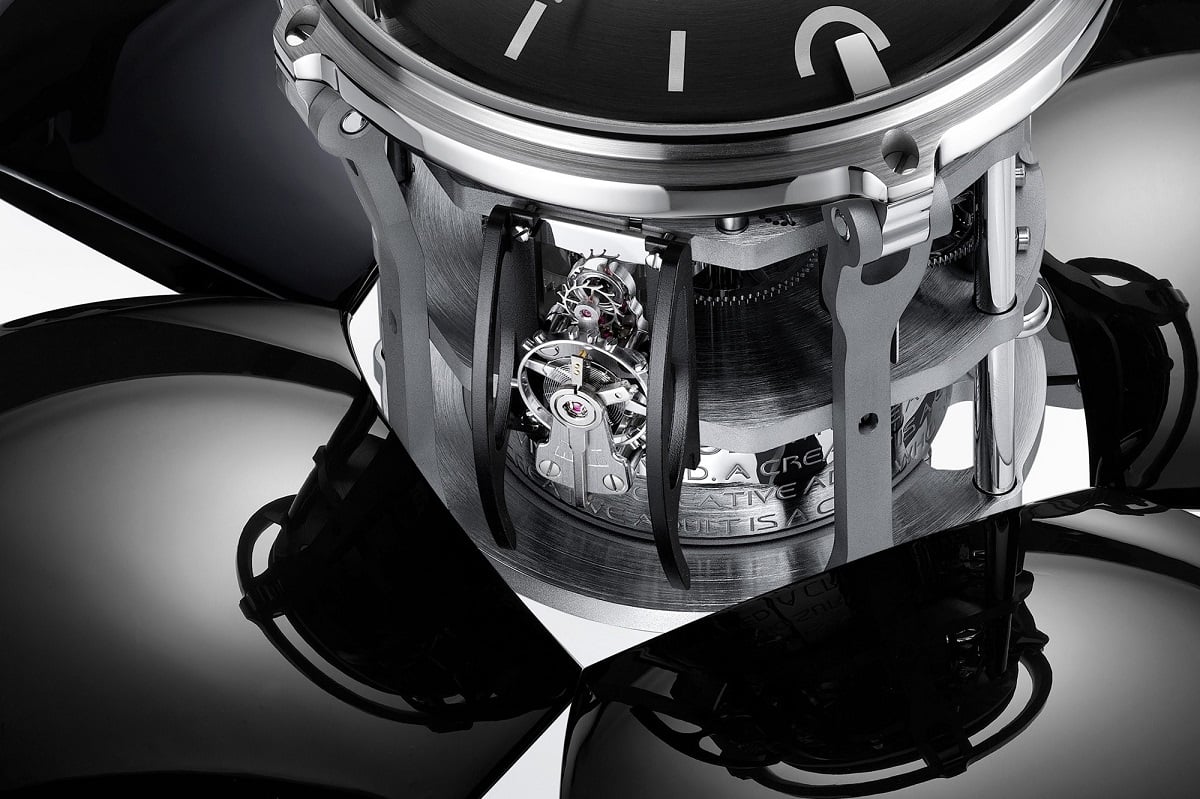 And you don’t even have to wait for the Orb to sound the hour. With the push of a button, the Orb chimes on demand. And if you prefer silence, the striking mechanism can be turned on and off with a button on the side of the clock. 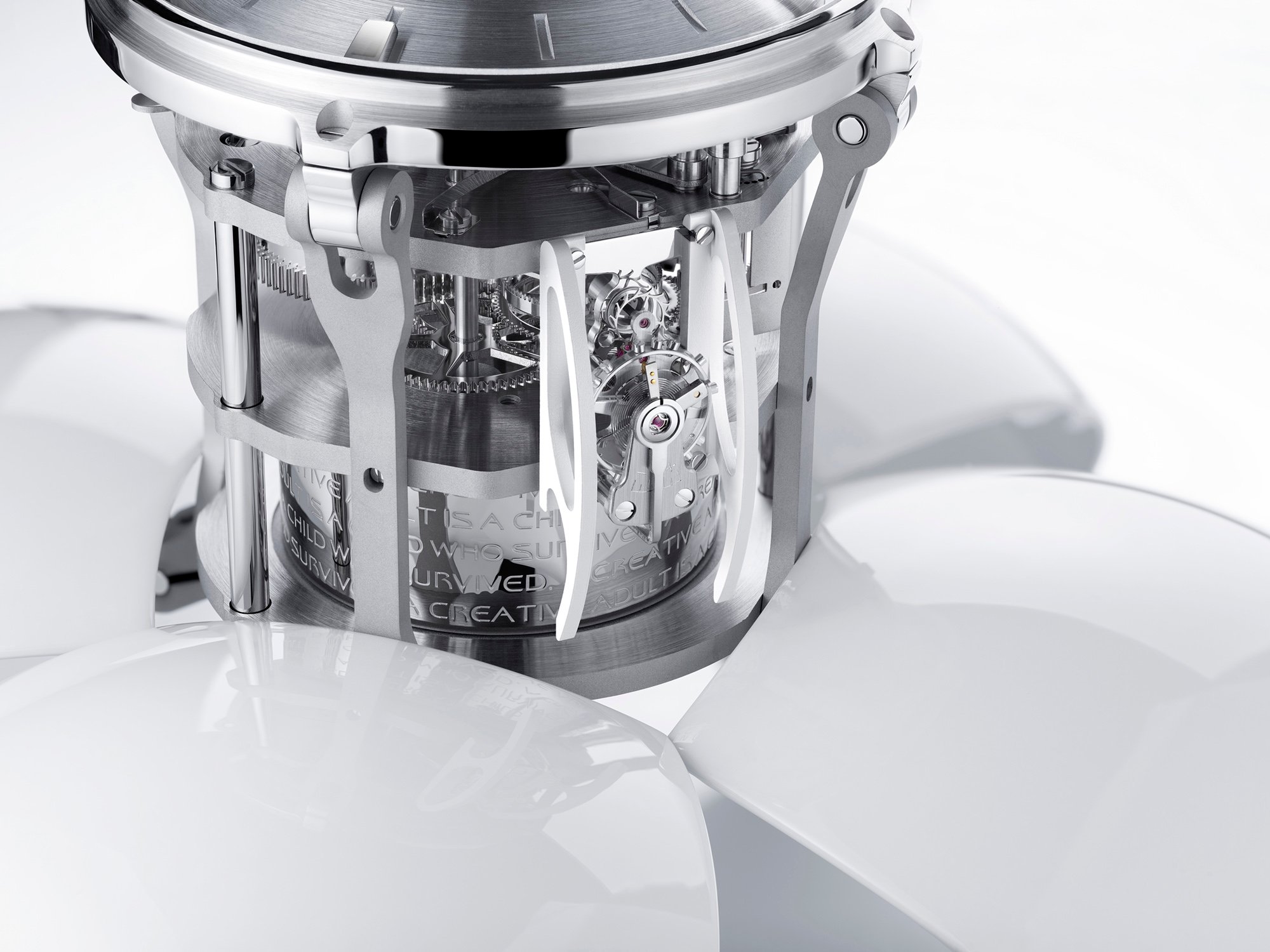 The creation of the Orb is a genuine success story. The spherical clock is the brainchild of German designer Maximilian Maertens, who started his artistic career at MB&F as an intern. After his internship, he set up his own design studio in Berlin and later worked on the T-Rex clock from 2019 and the TriPod. 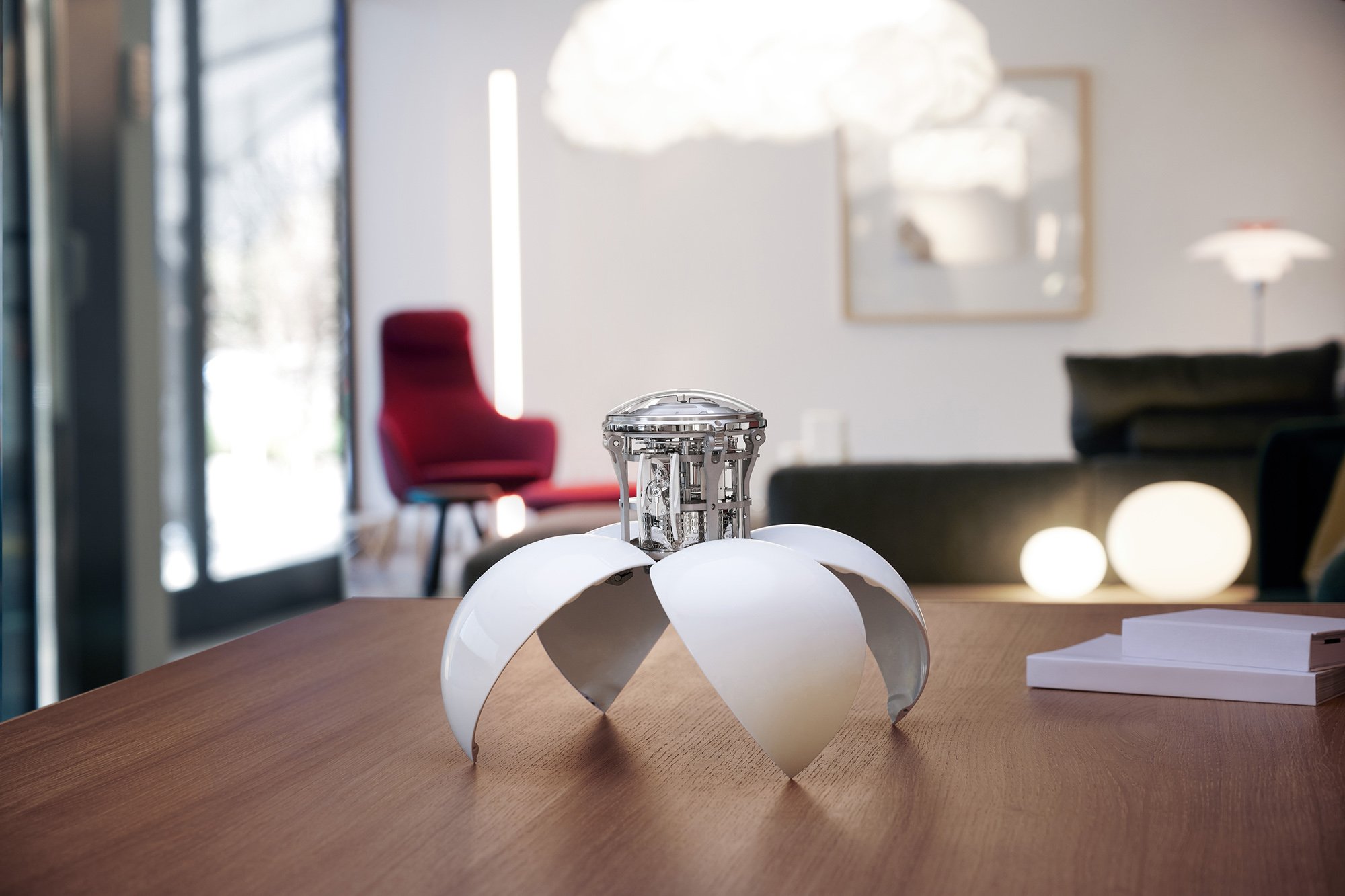 The MB&F × L’Epée 1839 Orb is available in white or black, with each color limited to just 50 pieces. Deliveries are already underway, but there are still a few pieces in the MB&F eShop.

We’re interested to hear what you think of the Orb, and if table clocks still have a place in our digital world. Let us know what you think in the comments below!