Is A Mechanical Combination Lock Integrated Into A Watch Case Just A Romantic Idea Or The Next Big Complication?

Two crowns and four positions are used together to set a four-digit code in order to open a mechanical combination lock. When the code is entered correctly, the stem is released allowing you to wind the mechanical movement, set the time, or unscrew the case back.

When I read the email from the creator about his mechanical lock on a watch, I was skeptical, I instantly envisioned a fortress that would turn the watch into some giant ugly safe. But if you’ve seen my collection, you know I am fascinated by all unusual watch complications. The quirkier they are, the more fascinated I am. So I kept reading and studying the project renders. What surprised me most was how seamlessly Denis Gladkov, the creator of the complex mechanical lock, integrated the idea into a watch case. I arranged a couple of calls with Denis and asked him to create a set of unique animations so that you could see the world premiere of his mechanical combination safe lock integrated into a watch. 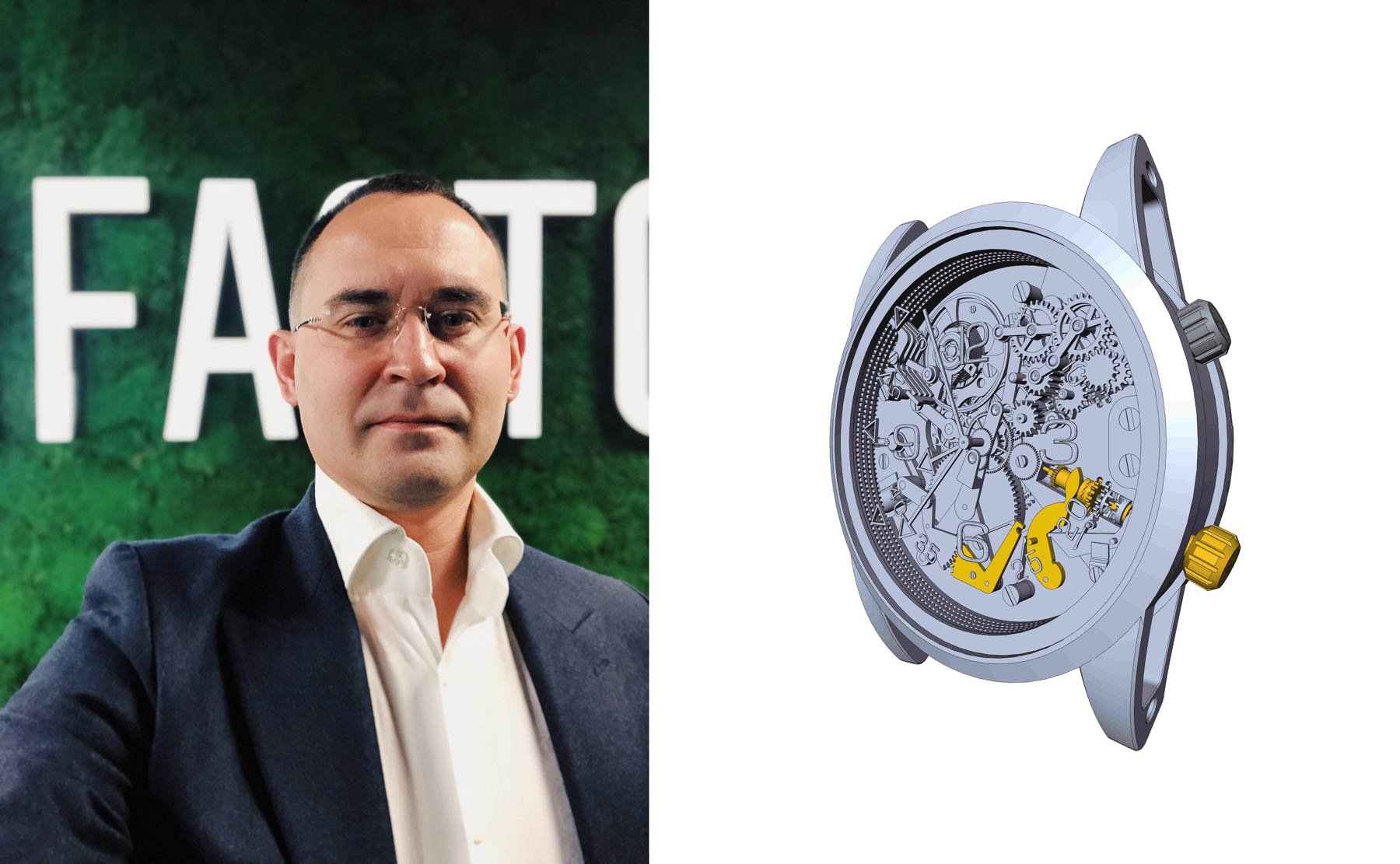 Quite literally! Last year on February 5th, Denis had a dream that his Breguet wristwatch was stolen. “I woke up with such strong resentment in my soul. How could this have happened? Why is there no lock in the watch like in a safe, so that the attacker could not use the watch and profit off of it?”, Denis explains how the story began. Inspired by this dream, he studied the numbers and realized that watch theft is a big issue globally. The FBI website estimates that the jewelry and watch industry in the US alone loses more than $100 million annually in retail theft. Paris reports that thefts of luxury watches rose 28% and Katya Hill, the managing director of the Watch Register, reports another 10,000 stolen watches in just the past 12 months.

Watch stealing is a big “business”

Denis could not stop thinking about his dream. That’s why he started to think about protecting a watch in a way, that even when stolen, the thief couldn‘t use it. He decided to design a protection system, which if attempted to be broken into, would devalue the entire watch. In the beginning, he had to identify a node that can be blocked without disrupting the normal operation of the watch. The stem that allows to wind the watch and set the time, appeared to be the vital part, around which Denis decided to design the locking mechanism.

There are four independent discs around the inner side of the case. From inside the case, they look like a miniature Colosseum in Rome, its shape allowing the gear wheels to run them seamlessly. On the hidden outer side of each disc, there is a slot. By rotating each disc individually, you need to align the slots so that you can press the pusher and unlock the stem for time setting and winding.

How do you enter the codes for a combination lock? The upper crown has three positions. You can freely rotate it in each position and thus rotate one of the discs. The discs and gear wheels are arranged in sandwich-like layers so that they rotate freely over one another. The dial is numbered 0-99 to allow you to set the triangular symbol on each disc into a pre-set unlocking position. To set the fourth and final disc which sits at the bottom, you need to rotate the bottom crown in its zero position. And only after you successfully set the right code can you press the pusher to unlock the stem and wind the watch. Obviously, in order to block the watch again, you need to press the same main pusher and then mix the triangles of the code, in the same way as you entered them.

Denis added another decent and thoughtful addition to his patented combination watch-lock system. As visualized in the animation above, there are another two lock bolts that engage with the toothed ring around the inner side of the case back. Only after the code is entered correctly does the press of the pusher unlock another smaller hidden-button next to it. If you press it, lock bolts lift up and you are able to unscrew the case back. Talk about clever design! 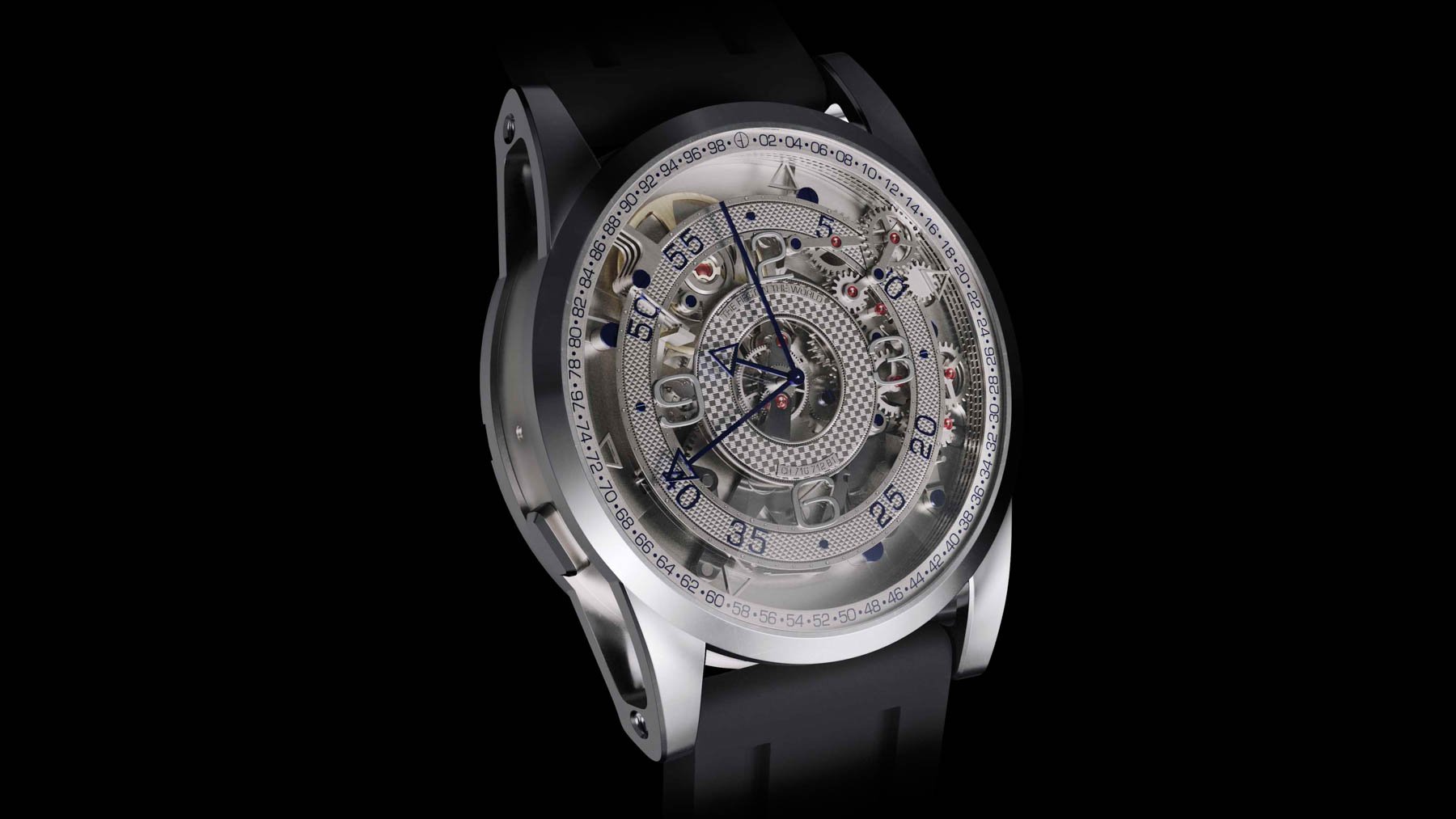 The locking system as described and visualized above strikes me as epic. Epic and complicated in a way that only tiny watch parts could ever be. Denis’s combination watch-lock isn‘t unnecessarily huge (as I expected it to be) and thus doesn’t grab too much attention. Denis has already been working on a 36–38mm watch prototype, which will confirm the usability of his combination lock concept for an everyday watch.

That’s uncertain as of now. When I asked if it wasn’t better to wait and launch the concept with his own watch on Kickstarter, Denis was clear on his strategy. “My goal is not to glorify my name, but rather to succeed in protecting as many watches as possible.” So rather than being an exclusive micro-brand, Denis wants to move faster and make his technology available to the whole market. 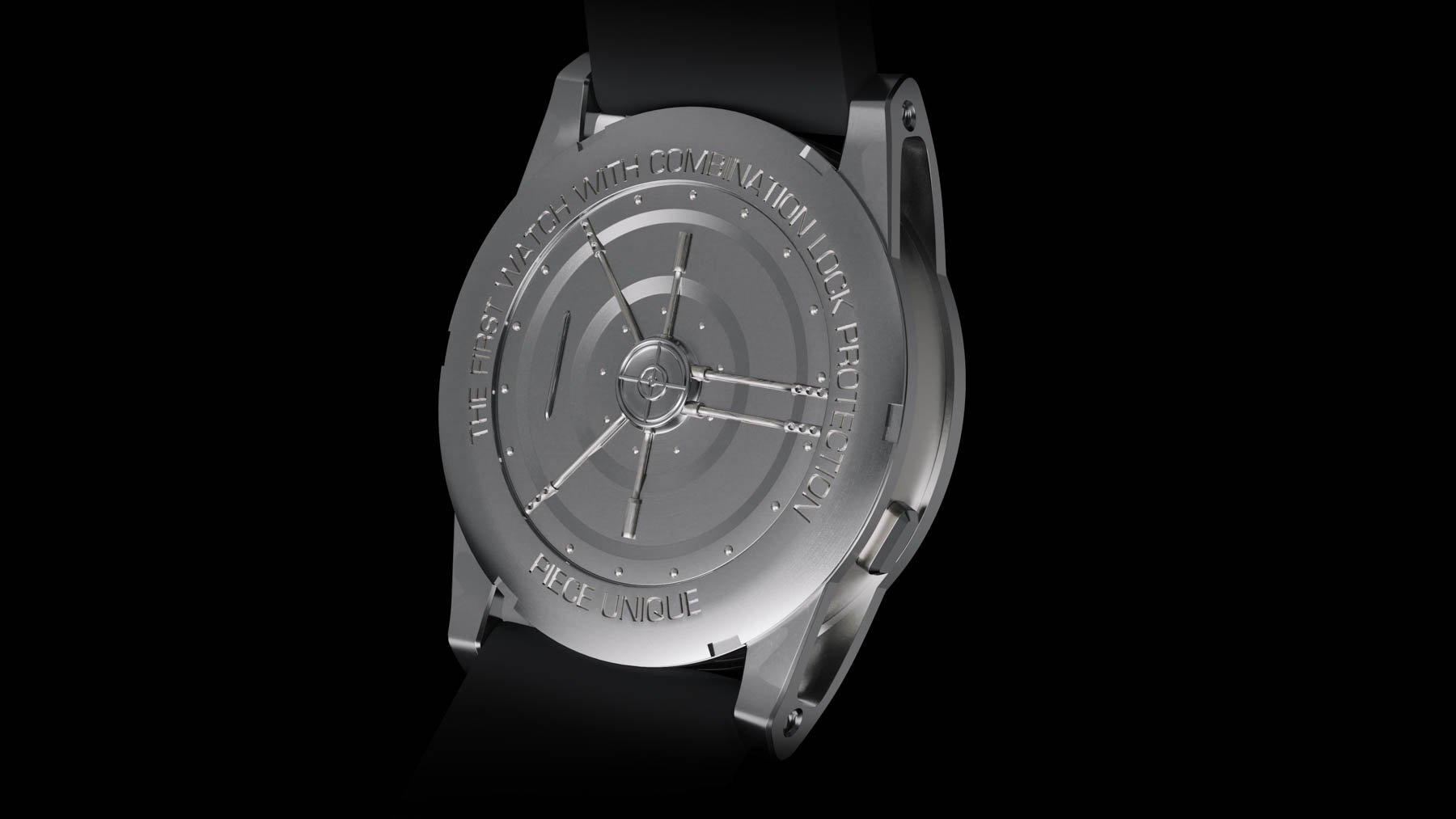 Only time will tell how many brands will be willing to implement a watch-lock without being able to offer it exclusively. On that note, Denis says that he has a couple of new ideas on different locking systems. “The current prototype uses the principle of a roller lock. I can develop a special dial lock that will be thinner and will allow you to enter the code using only one position of a single crown.”

How protected is your watch?

Trying to guess the code with more than 100 million possible combinations would take more than 10 years of continuous attempts to break into it. If the thief attempts to force the mechanism, he will damage the movement. A pessimist will object that once the watch is stolen, it’s gone. The fact that the thief can’t use it doesn’t change much about the fact that you lost your dear watch. And that’s why Denis wants to go mass market and see his watch-lock (and many others to come) as standard complication as a date. A utopic or even naive idea? Maybe. But I know of some dreamers that made it very far… 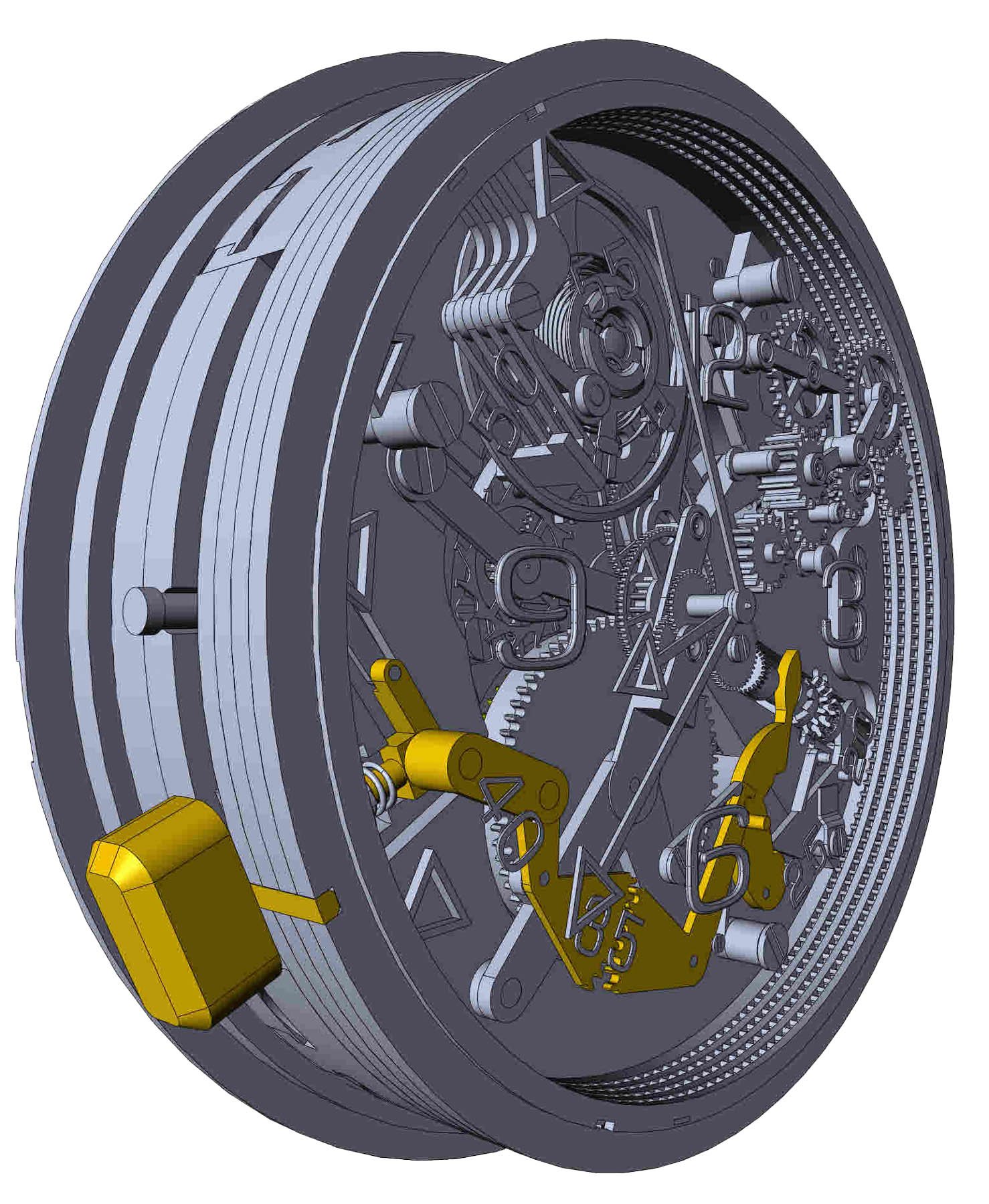 The patented combination watch-lock doesn’t have a brand name yet so feel free to get creative in the comments. It’s visually rather pleasing, taking inspiration from watch movement DNA. It doesn’t look like some strange element that violates the watch movement’s uniqueness. On the contrary, it underlines the wheel train logic and multiplicates its fineness for a very nice purpose. What’s crucial is that it doesn’t dramatically change the watch concept from the outside either, so there is still a lot of room for design.

I won’t even try to hide my fascination and will go ahead and say it: I want to see this tech horology study become real as soon as possible. As soon as it comes to life, I would be happy to be the first customer.