Named after the legendary street circuit which hosted Formula 1 for a number of years in the late ‘60s and early ‘70s, the Montjuïc brand was founded by three passionate fans of motorsport and watches alike. The father-son team of Rosendo and Tendu Rabat come from a family with a long-standing tradition in watchmaking, and Eduardo Méndez has a background in motorsport. The three of them came together to create a brand that brings together their shared interests, culminating in watches whose design is inspired by the rich racing tradition in the Barcelona circuit of Montjuïc.

I am also a Spanish fan of motorsport, and there are two iconic circuit names that harken back to the glory days of racing in the Iberian Peninsula. Those two names are Jarama and Montjuïc. It was these two circuits that hosted the lion’s share of motor racing events in the ‘60s, ‘70s, and ‘80s. And if you find that one of those two names rings a bell in relation to watches, you’re probably thinking about the Heuer wristwatch named after the first one — the Heuer Jarama. But now it’s time for Montjuïc to shine, and rightly so. The circuit was legendary. Some describe it as both more technical and as beautiful as Monaco. For those of you familiar with Formula 1, you know that’s quite a big statement to make. So, do the brand’s watches measure up to the circuit’s reputation? 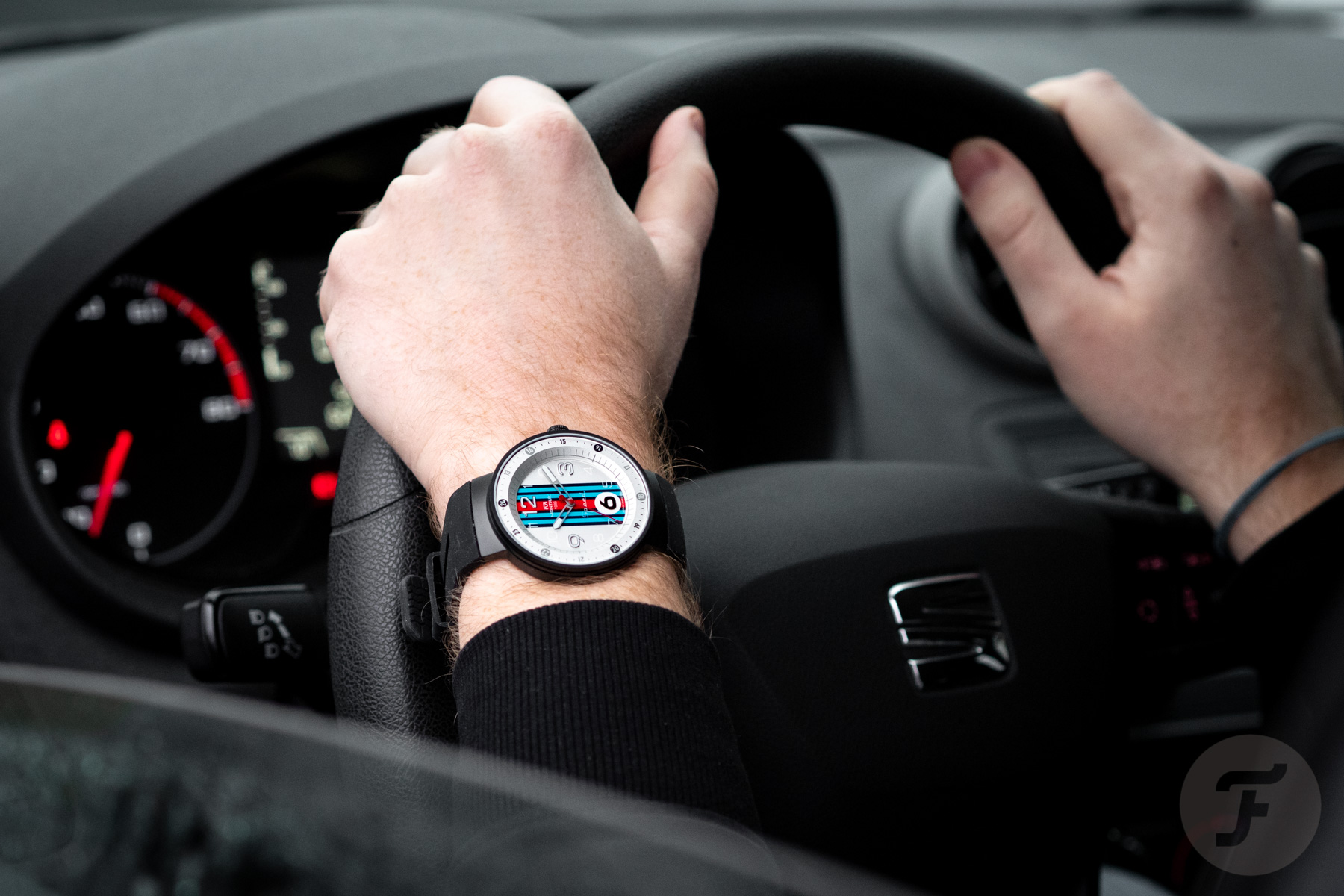 The first thing that stands out when looking at the range offered by Montjuïc is the variety of models available. Other than the recently launched Chrono model, the brand’s debut took place with the Speed family of watches. Within this range, there are four sub-categories: Standard, Elegance, Sport, and Special. Now, the Standard line’s watches are offered in two variants with a black dial and a red second’s hand. They also feature red and orange highlights on the fixed, internal 24-hour ring.

The Elegance line tones things down, with a silver seconds hand and a single color on the dial (with the exception of the bronze PVD model). The Sport watches are similar to both the Standard and Elegance models but feature a colorful pair of racing stripes on the dial. Finally, the Special line watches are decorated with well-known liveries of the era, including Shelby, Martini, Lotus, and Gulf. 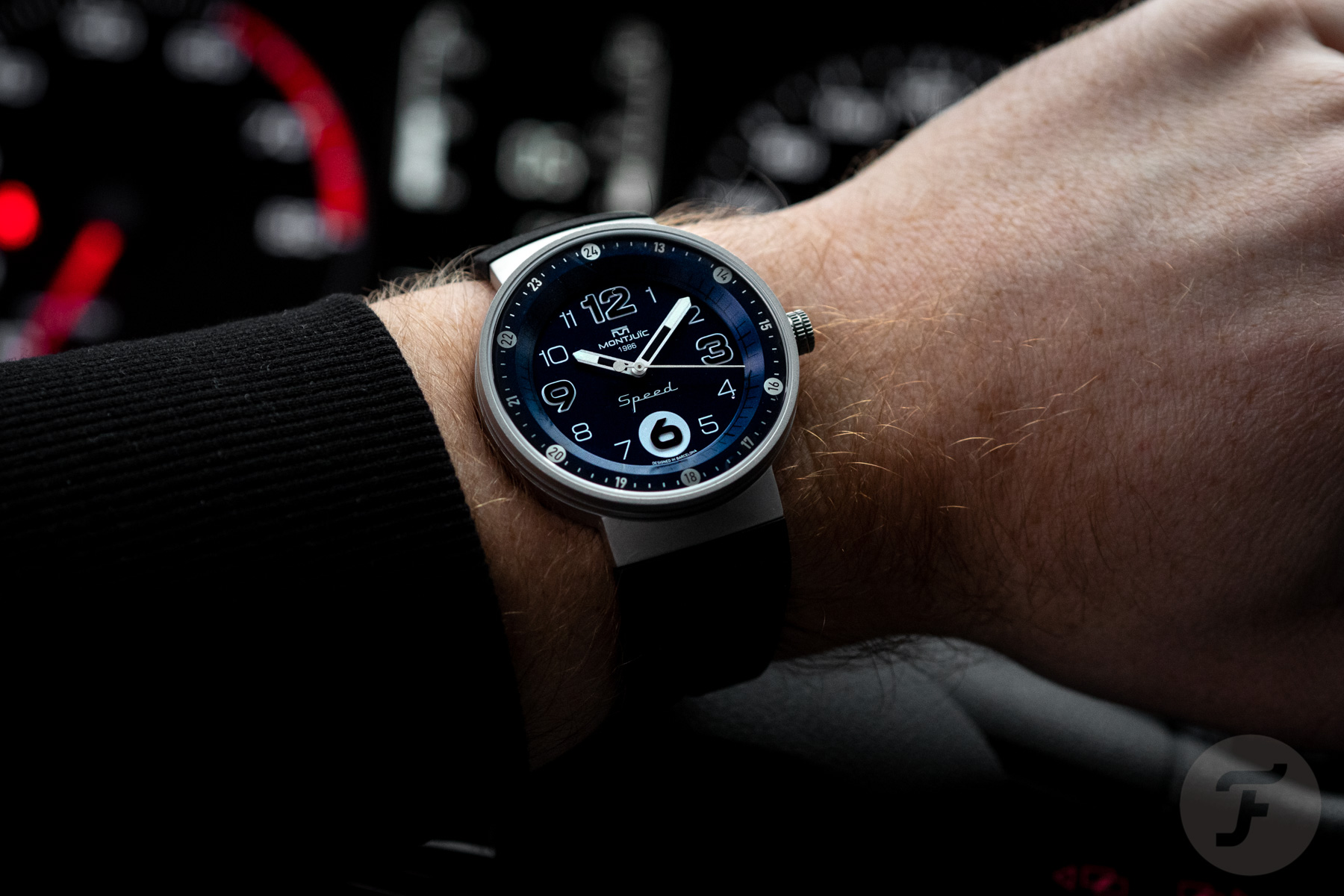 Most of the models are available in both a standard matte 316L stainless steel case or with a black PVD finish. The 43mm case is only 11mm thick, while the hooded lugs have the same width as the rubber strap and slope downwards. These factors combined mean that the watches wear smaller than their size might indicate. A flat, hardened K5 mineral crystal adds no further height to the overall shape. Matching the case in both materials and finish, a deployant butterfly clasp keeps the watch firmly on your wrist and makes adjusting how the watch fits the wrist easy without a need for additional tools. Swapping out the signed strap is also a tool-free endeavor, as both its attachment to the case and clasp features a quick-release system.

For my hands-on review, I was sent three watches, representing three of the models — the Standard (in orange and black), Elegance (in blue), and Special (in the Martini Racing livery). At their core, all three of these Montjuïc watches are the same. They have the same case size and shape, they come on the same rubber/silicone strap, and have the exact same dial layout. Even the meca-quartz movement inside is the same. However, what better way to show off what the brand is doing than to show you three of their watches? My personal favorite is definitely the Special, with the Martini Racing livery stripes on the dial. This particular model also has a black PVD case, which contrasts nicely with the bright dial. The other two are great in their own right, but as these are motorsport-inspired watches, it’s the over-the-top Martini-dialed one for me all day long. 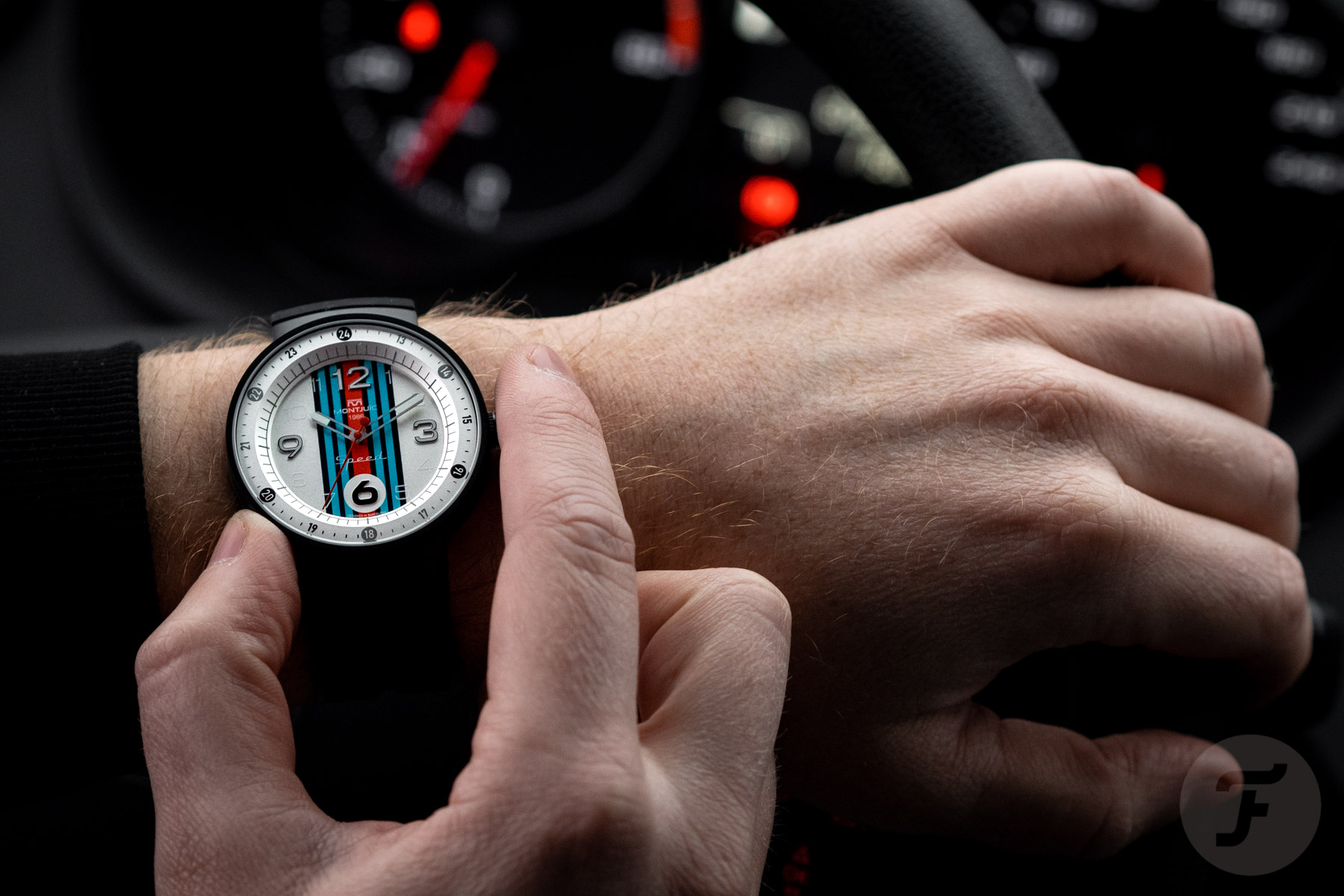 Moving on to some additional technical details. I very quickly mentioned that these watches are powered by a meca-quartz movement. To be more specific, it’s a Hattori TMI movement, which, despite being a quartz movement, still (kind of) sweeps. The seconds hand advances four times per second. Just to place that into context, a seconds hand in a watch with a Sellita SW-200 inside, which operates at 28,800vph (or 4Hz), will advance eight times every second. So, in contrast to the familiar sweep of a mechanical watch, the seconds hands in these watches advance in a rather peculiar, jumpy way. Is it better or worse than a standard ticking quartz movement? I’d say that’s entirely subjective. Personally, I don’t have a preference for one over the other. However, I do think that meca-quartz movements work better in the chronograph configuration.

Overall, the watches are well made, comfortable, and charming. The movement gives them an interesting edge over other pieces competing at the same price point. The jumpy sweep, though a bit odd to those used to mechanical watches, is still an interesting feature. However, for me, it’s the design of the watch that I like best. The piston-like case with its engraved rings. The nicely detailed dials, with their raised numerals and circled six inspired by numbers on vintage race cars. The big signed crown, with its grippy knurling, and beautifully engraved case back depicting the Montjuïc circuit’s outline. Though one thing I’m not entirely certain of is just how useful the 24h markings on the internal bezel actually are. I suppose, like with field watches, they’re just there to indicate “military time.” 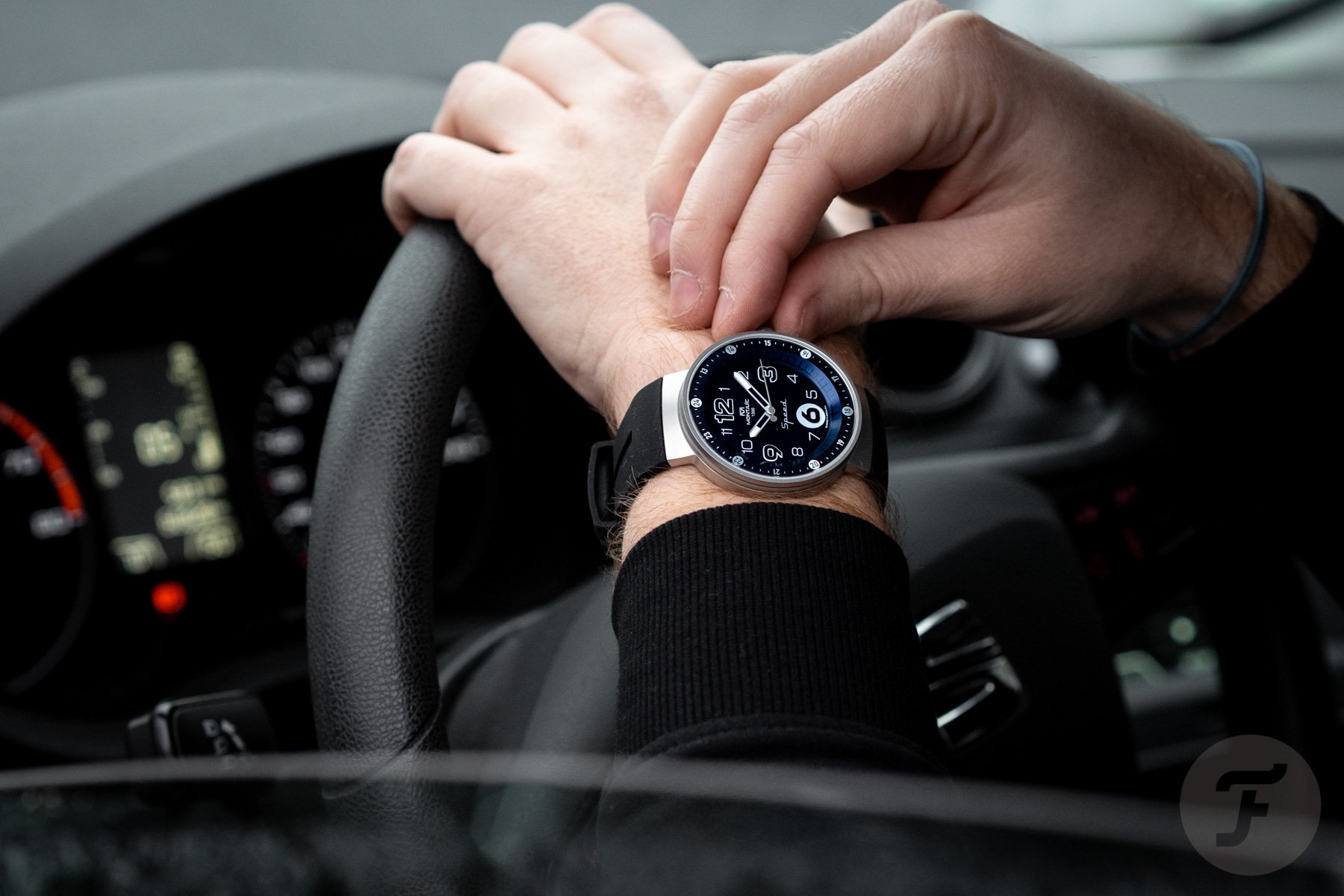 For the price point, of €275 (or €295 for the black PVD-cased models), even the oil-drum packaging is better than that of most microbrands and shows a level of thoughtfulness that is often lacking. Plus, with every watch, you get an additional rubber strap.

If you are in the early days of collecting or are looking for a fun motorsport-inspired watch with an interesting movement and decent quality for the price, the offerings from Montjuïc Watches may be worth your time. These first models represent an ambitious and impressive first step into the world of watches. I, for one, am excited to see what the brand will do in the coming years, and hope it will go the mechanical route. What do you think of them? Let me know your thoughts in the comments below.