"If you believed, they put a man on the moon"
Robert-Jan Broer
comments 19
Share

What better way to spice up your Moonwatch than with a strap that includes fragments of lunar meteorite? Meet the Moon DNA strap from the Scandinavian company REM Straps. The brand is the brainchild of watch enthusiasts Totte el Siddig and Roger Clementz. Totte has a background in design, and Roger is an engineer. The straps they sell originate completely from Sweden, from design and manufacturing to packaging and shipping.

The leather that REM Straps uses comes from Nissafors, a very small place with less than 300 inhabitants. Tanning of the leather takes place in Tärnsjö, another small place north of Nissafors. There, the leather is tanned and processed using traditional plant-based methods. The Tärnsjö tanning factory has been there since 1873, so the folks there are certainly not newbies in this field. Without going through all the IKEA-furniture-sounding names, there are a couple more locations in Sweden where leather turns into an REM Straps product. The cutting, laser engraving, stitching, and other steps needed in the process are all executed there. 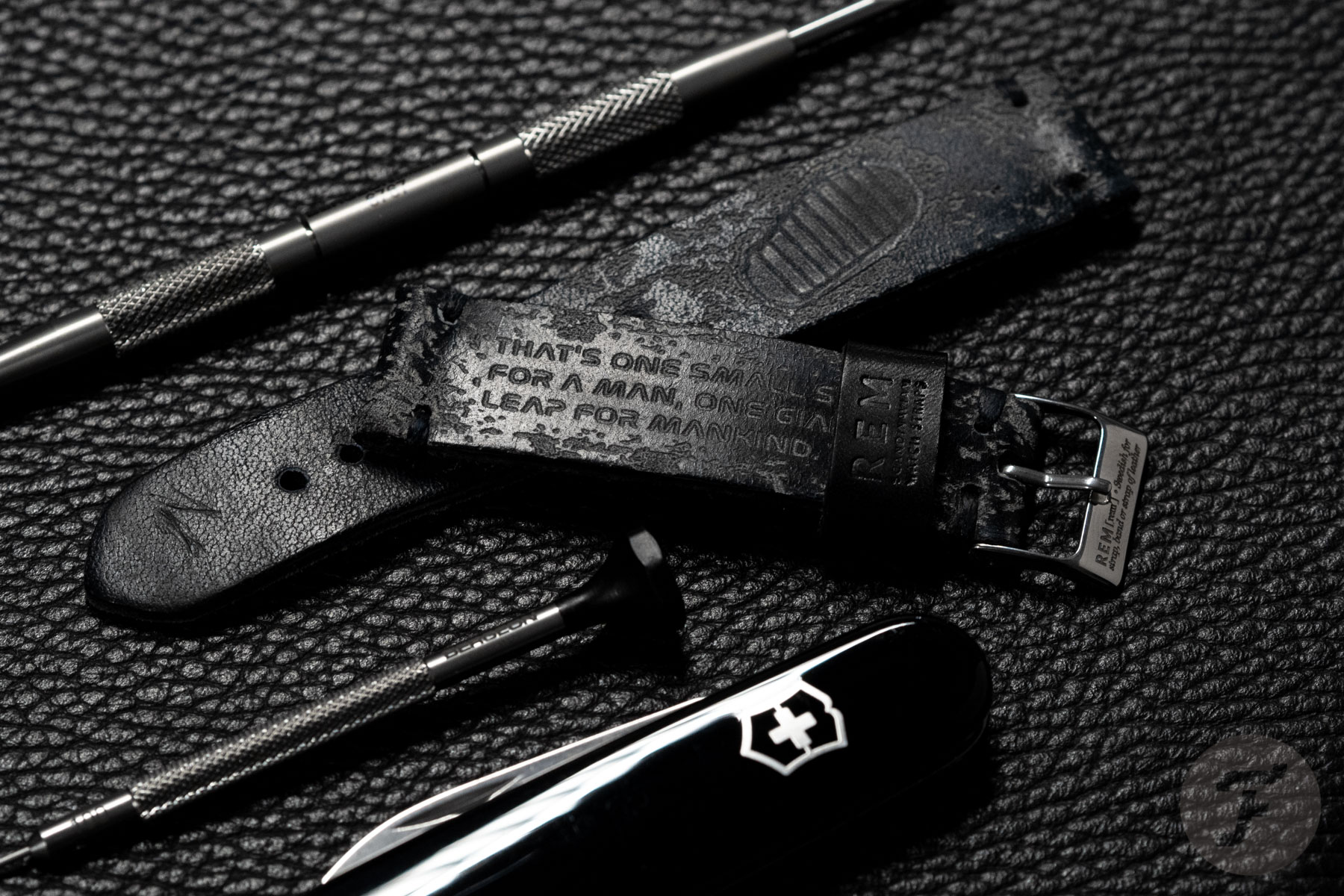 For the Speedmaster fans, REM Straps designed the Moon DNA strap. It’s a 20mm or 19mm strap that will fit Omega’s Speedmaster Professional and 19mm straight-lug models; these include vintage references up to the 105.003, and the modern CK2998 and “Ed White”. The first thing to notice is the stamp of the moonboot on the long side of the strap. It is laser engraved, not just printed on the leather. The short end of the strap has been laser engraved with Neil Armstrong’s famous words, “That’s one small step for a man, one giant leap for mankind”. 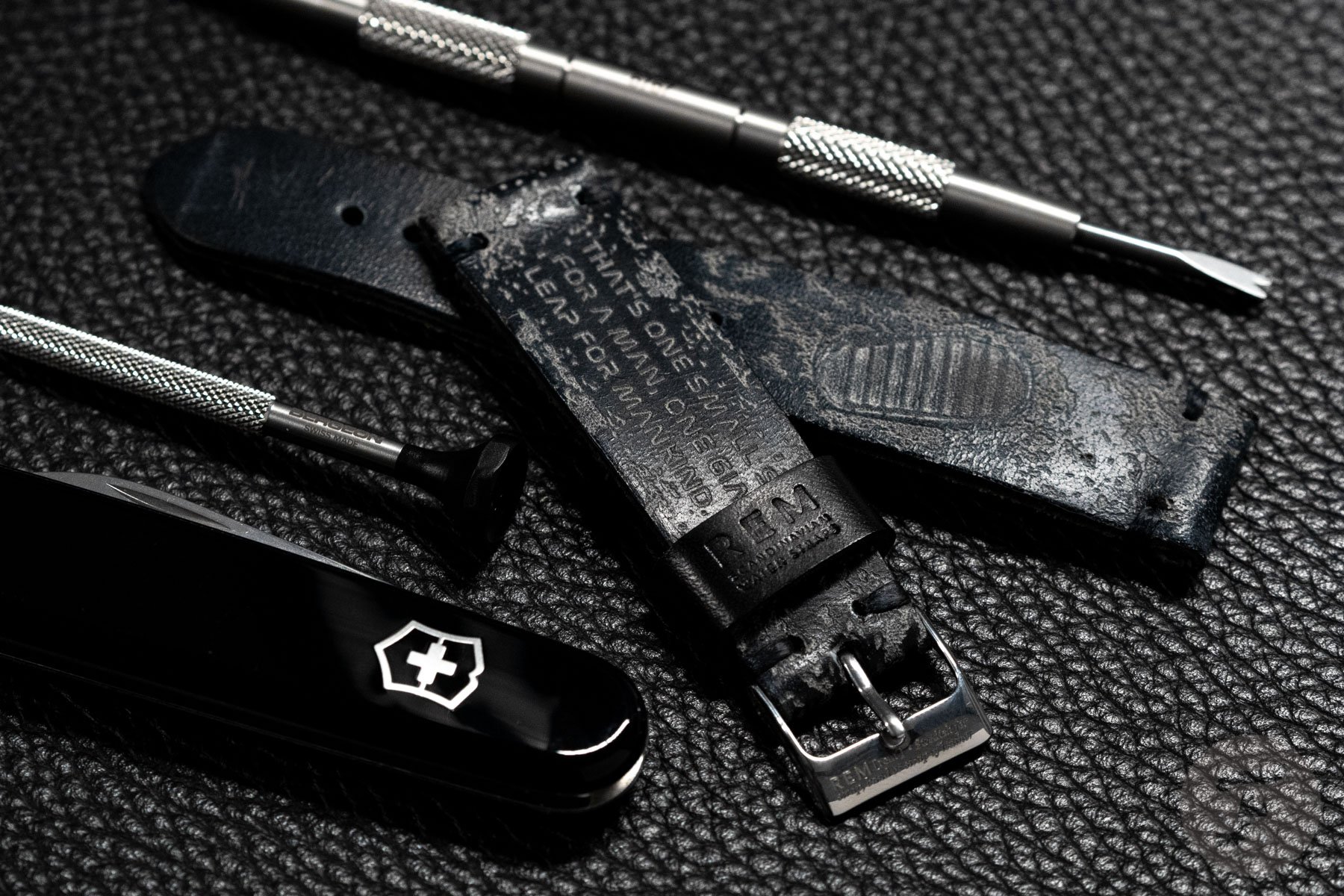 There has been a lot of discussion about the “small step for [a] man”, as the “a” couldn’t be heard, and when playing back the recording, there apparently was no “a” pronounced. However, in 2006, software engineer Peter Ford did further analysis on the famous sentence from Neil Armstrong. He used special software that allows disabled people to communicate via computers using their nerve impulses.

Ford identified a 35-millisecond-long bump of sound between the words “for” and “man”. While Armstrong may have enunciated less than clearly and/or the microphone may have not picked it up, the voiceprint is consistent with a vowel sound. So, laser-engraving the missing “a” on the strap sounds fine, at least to me. 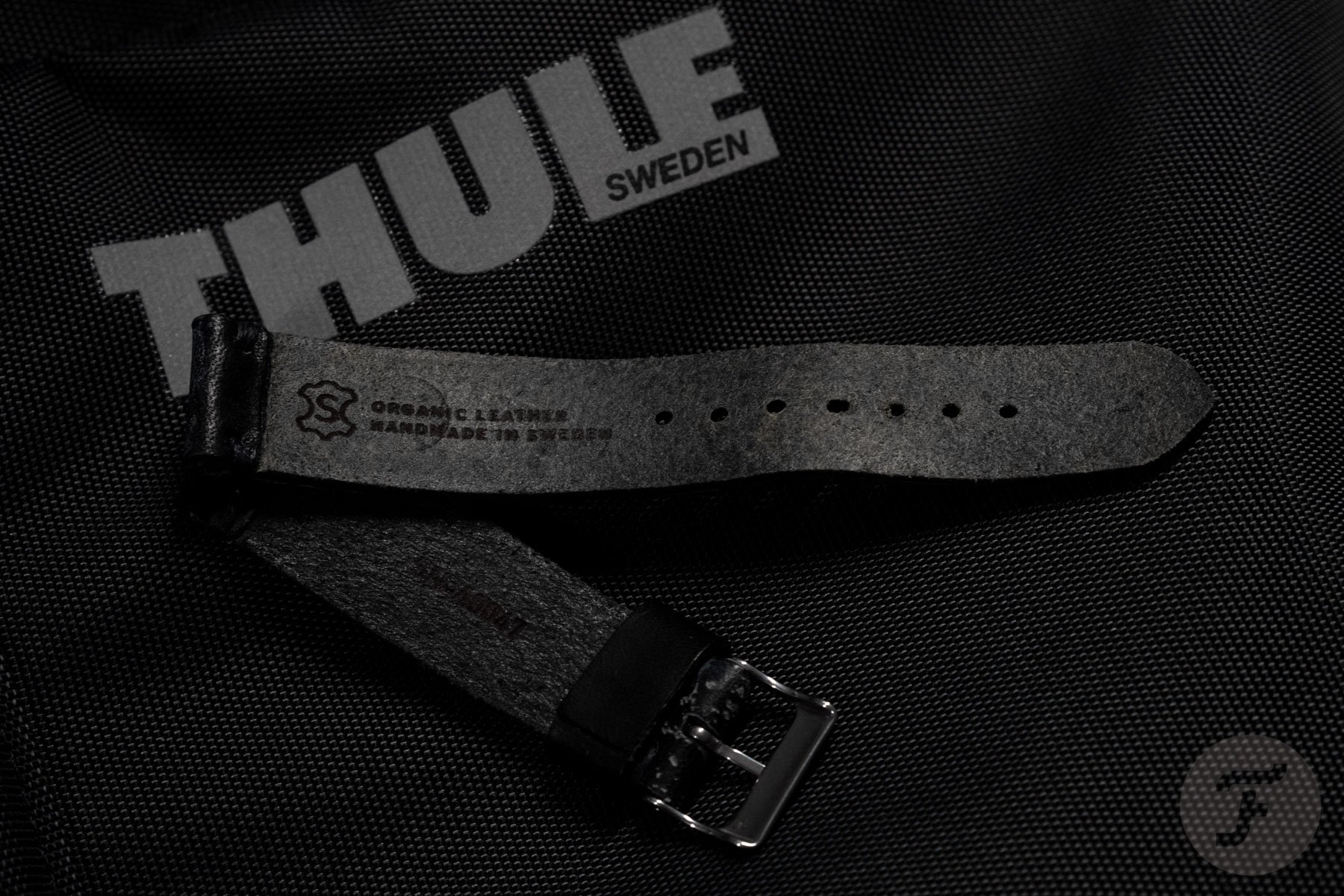 REM Straps took an additional step to make the Moon DNA strap live up to its name. REM added some fragments from lunar meteorites to the paint, calling it “Lunar White”.

When I first took the Moon DNA strap out of its box, I thought it would be a little bit too wide for my taste. I am used to straps that taper from 20mm to 16mm. This one, however, tapers from 20mm to 18mm. The long end of the strap measures 127mm, while the short piece measures 74mm. On the inside of the strap, there’s the “Organic leather handmade in Sweden” text on the long piece and a unique serial number on the short piece.

The organically tanned leather of the strap feels thick, and the insides are a bit raw. It also has the “vintage” stitching on both sides, and there’s a keeper with the engraved REM branding. The keeper appears to be a bit big at first, but when you put it to use, the long piece of the strap fits fine. If REM had made the keeper a bit tighter, it might have looked better when off of the wrist. It would probably become troublesome to actually use it, though. 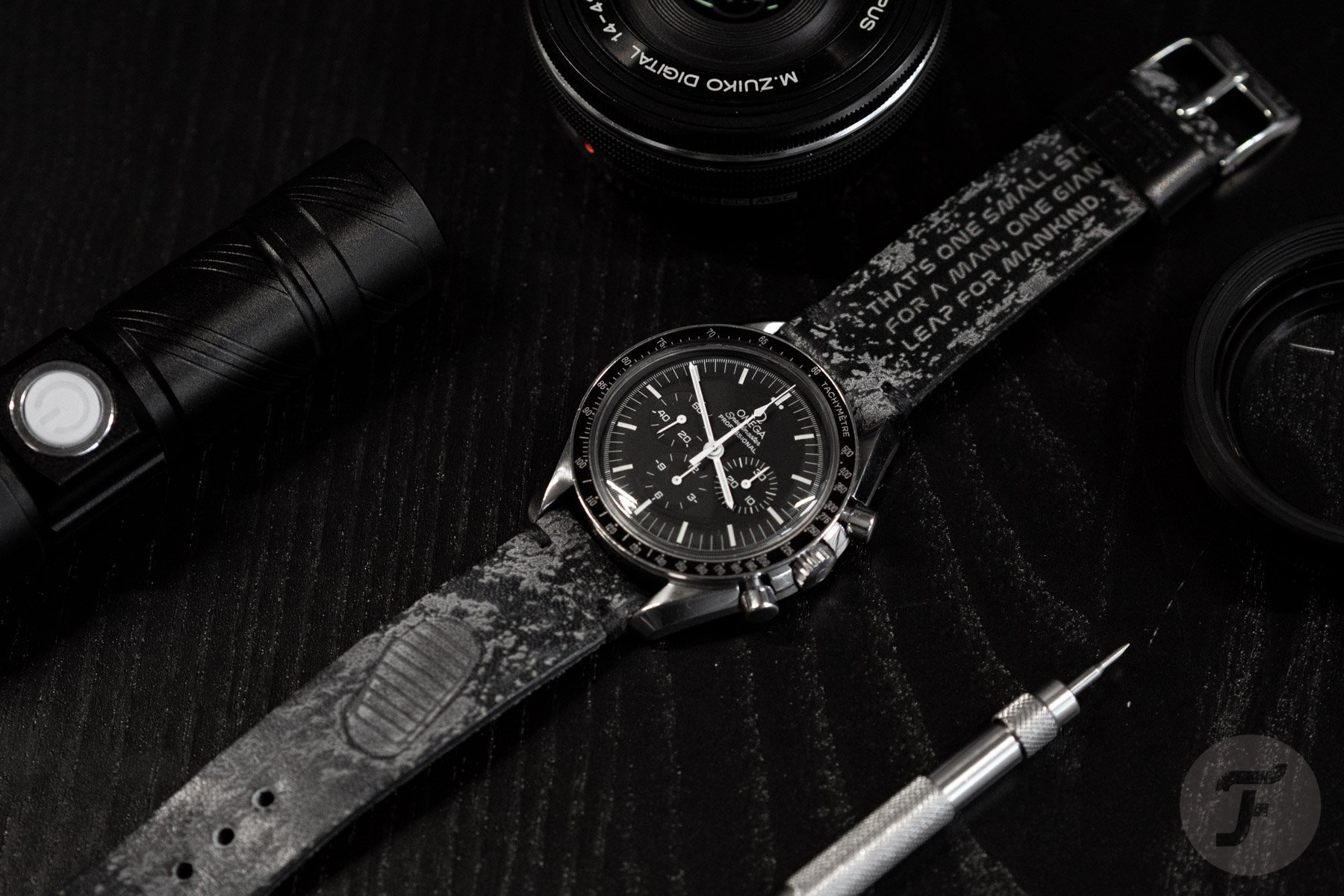 REM Straps produces the Moon DNA strap to order, so expect a delivery time of one to three weeks. The price is €179 including free shipping. Aside from the price, this strap is definitely not for everyone (nor should it be, I might add). Some of my colleagues didn’t like the text on the strap, not because it isn’t properly done, but because to them, it just looks too cluttered. I have no issues with it, but I do see it as a little bit gimmicky, which I don’t mind from time to time. It is not a strap I can see myself using on a Speedmaster forever (or until it wears out). I think it is a nice add-on to those who love the Moonwatch and collect all sorts of accessories surrounding this watch.

But what I don’t like that much is the buckle. It is engraved with “REM – Swedish for strap, brand, or strap of leather”, but the awkward English is not what bothers me about it. The look and feel of the buckle are my sticking points. It has a polished finish and looks and feels like the cheap generic buckles you get on cheap straps. Of course, that’s easy to solve, as you can put an 18mm Omega buckle on there, but that won’t come for free either. If REM had simply gone with a brushed buckle, that small change would have made it look a lot better.

That said, it is a well-made leather strap, with a touch of lunar meteorite in there. The laser-engraved moonboot will be visible most of the time when worn on the wrist, and that’s exactly the cool bit.

For more info and to order online, visit the REM Straps website here.

Hot Topics
Introducing: The Omega Speedmaster Super Racing With Spirate System
162 comments
Design Vs. Specs — Which Is More Important To You When Buying A Watch?
86 comments
The Time To Buy Is Now: How The Current Economic Climate Influences Watch Buying And How You Should React
51 comments
My Predictions For New Omega Speedmasters In 2023
48 comments
A Regret-Free Guide To Buying Your First Luxury Watch — Part Three: Higher-End Options From Omega, Rolex, Grand Seiko, And More
48 comments
Popular
Top 10 Rolex Watches – Overview of Models Favoured By Our Readers
Fratello
25
Rolex Submariner – Historical Overview Of A Diving Legend
Robert-Jan Broer
22
Speedy Tuesday – The Original Omega Speedmaster Ultraman
Robert-Jan Broer
7