It’s beginning to look a lot like a dazzling rainbow of angular, chiseled dive watches! While everyone is still out enjoying the first snowfall of 2021, Doxa has been keeping busy in the workshop, chiseling away at the Sub 600T. And those late nights have certainly paid off, right in time for the festive season. Is there a better time of the year for the brand to spoil its army of passionate fans with a cornucopia of colorful divers? Not really, no. This late-fall release from Doxa sees its lesser-known 1980’s design hit the spotlight. And calling it a strong comeback feels like the understatement of the year.

Allow me to introduce you to the Doxa SUB 600T. Or should I say, “re-introduce”? That’s right, if you’ve been paying attention to what Doxa has been doing this year, you won’t have missed the sneak preview of the SUB 600T. This came about in the form of a limited edition SUB 600T Pacific. In essence, this was the same as the new production models, but in titanium and with a slightly different color. If you weren’t one of the lucky 200 that took one home, you now get a second chance! Actually, it’s more like 24 different chances, as this is the number of possible color/bezel/bracelet/strap combinations. Doxa lovers, rejoice! 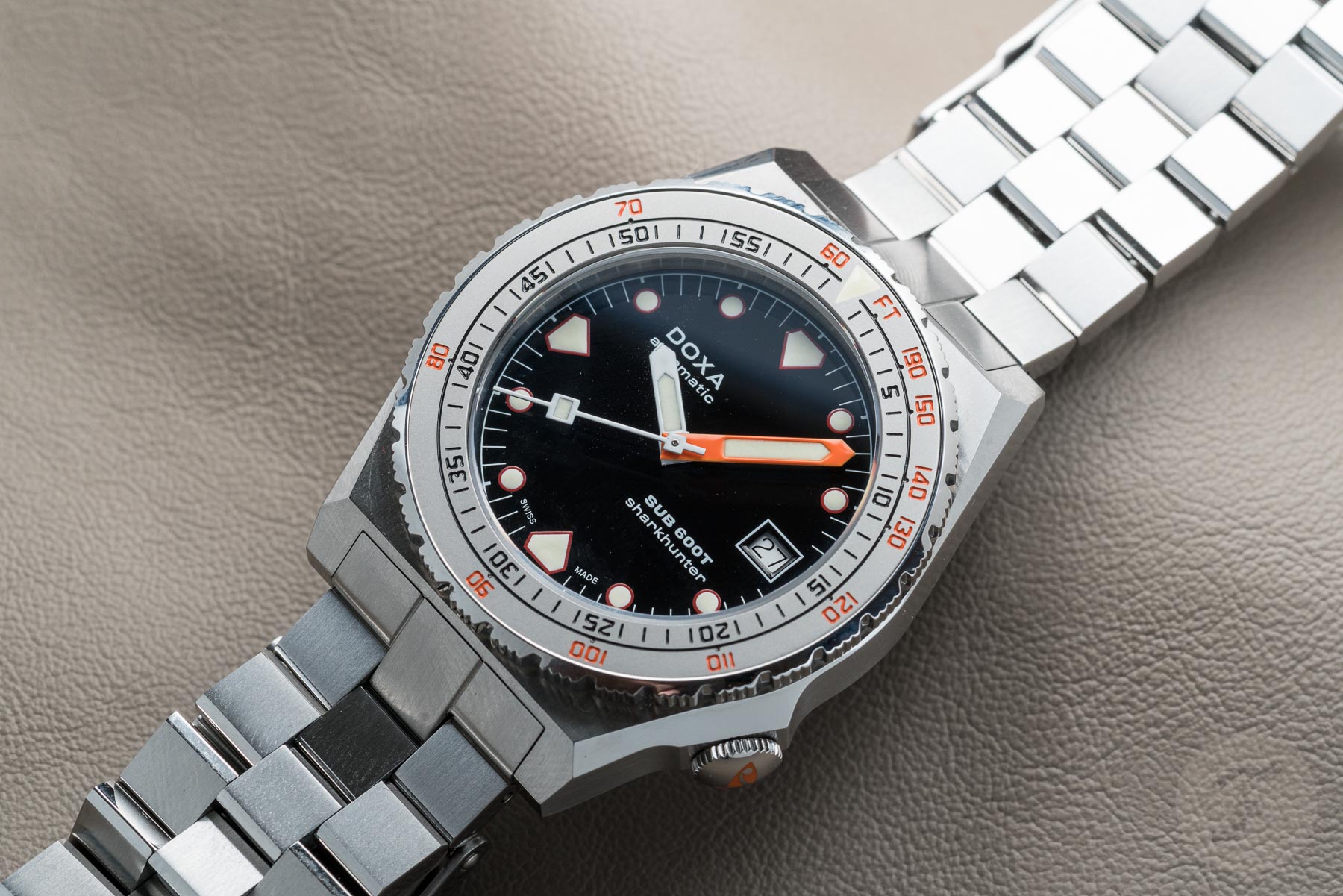 Seeing the SUB 600T reminds me of how good of a decision it was to bring back the SUB 300T first. Don’t get me wrong, I’m a fan of the SUB 600T, but there’s something much more likable about the curved lines of the original Doxa dive watch. That being said, the timing could not be better. The comeback of the 300 models was a clear success, and following up with all the variants and even the SUB 200 was a great move from Doxa, but all played quite safe. That’s why it’s so awesome to see the brand making a callback to a weirder time in its history, and in turn, bringing back a model which, though unapologetically Doxa, does provide something quite different. 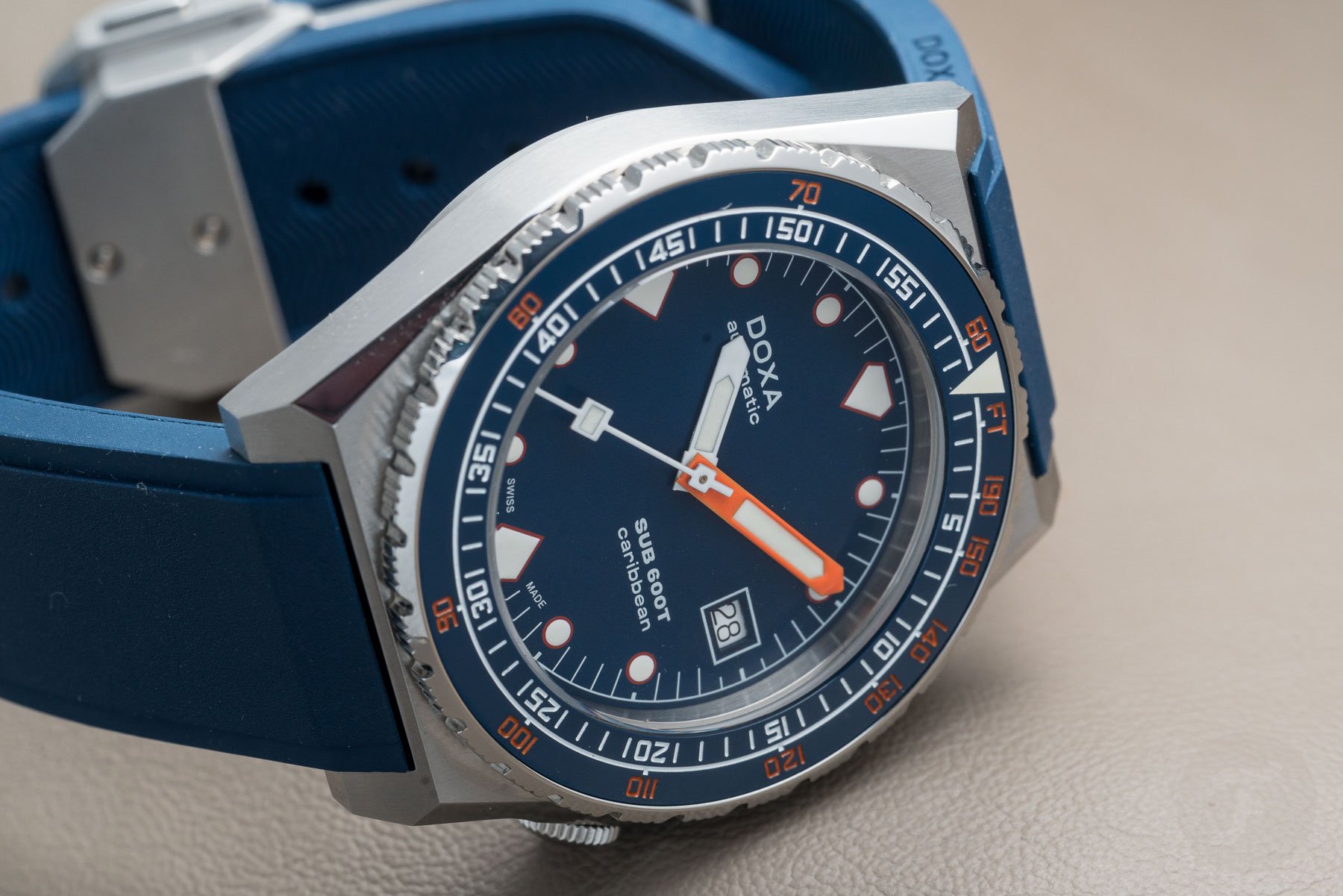 There’s nothing worse than getting stuck in your ways. And when you’re playing with such an impressive back catalog of watches, it’s great to bring back an oddball model. Doxa proved that it can innovate with the release of the SUB 200. It’s vintage-inspired, but feels modern, and yet carries plenty of the brand’s DNA. Going carbon was an undeniably cool move. But now, we drop the curves and go angular. But in true Doxa style, it’s not just a reissue of an old model. An innovative touch in terms of materials is the cherry on top of the new SUB 600T. For more on the history of the SUB 600T and its Divingstar origins in the ’80s, check out Rob’s article on the LE release from earlier this year here. 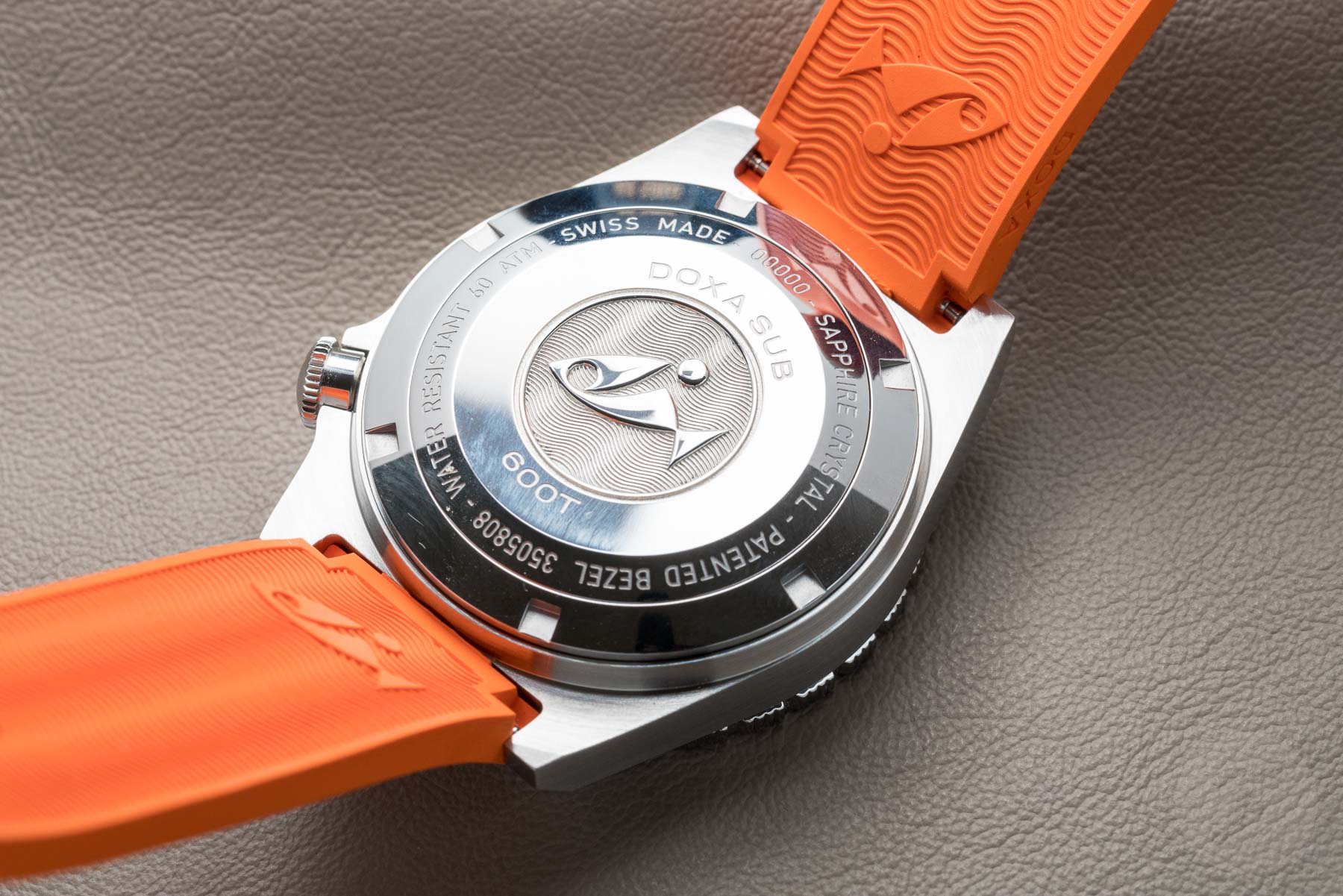 First, let me address the size of this new watch. The 40mm × 47.67mm stainless steel case is sure to make a lot of people happy. Not only is it faithful to the original, but combined with the domed sapphire crystal, it provides 600m of water resistance. The sharply angled case features a brushed top and beautifully polished facets, which wrap around the side of the lugs. This element works in perfect harmony with the bezel’s polished sawtooth edge and adds a lot of character to the lines of this watch. Also, the way the top of the case, the sloping lug, and the polished chamfer meet in each corner is brilliant. The signed crown can be found at 4 o’clock and sits nicely flush to the case. Inside, beats the ever-reliable, self-winding Sellita SW 200-1 with 38 hours of power reserve. 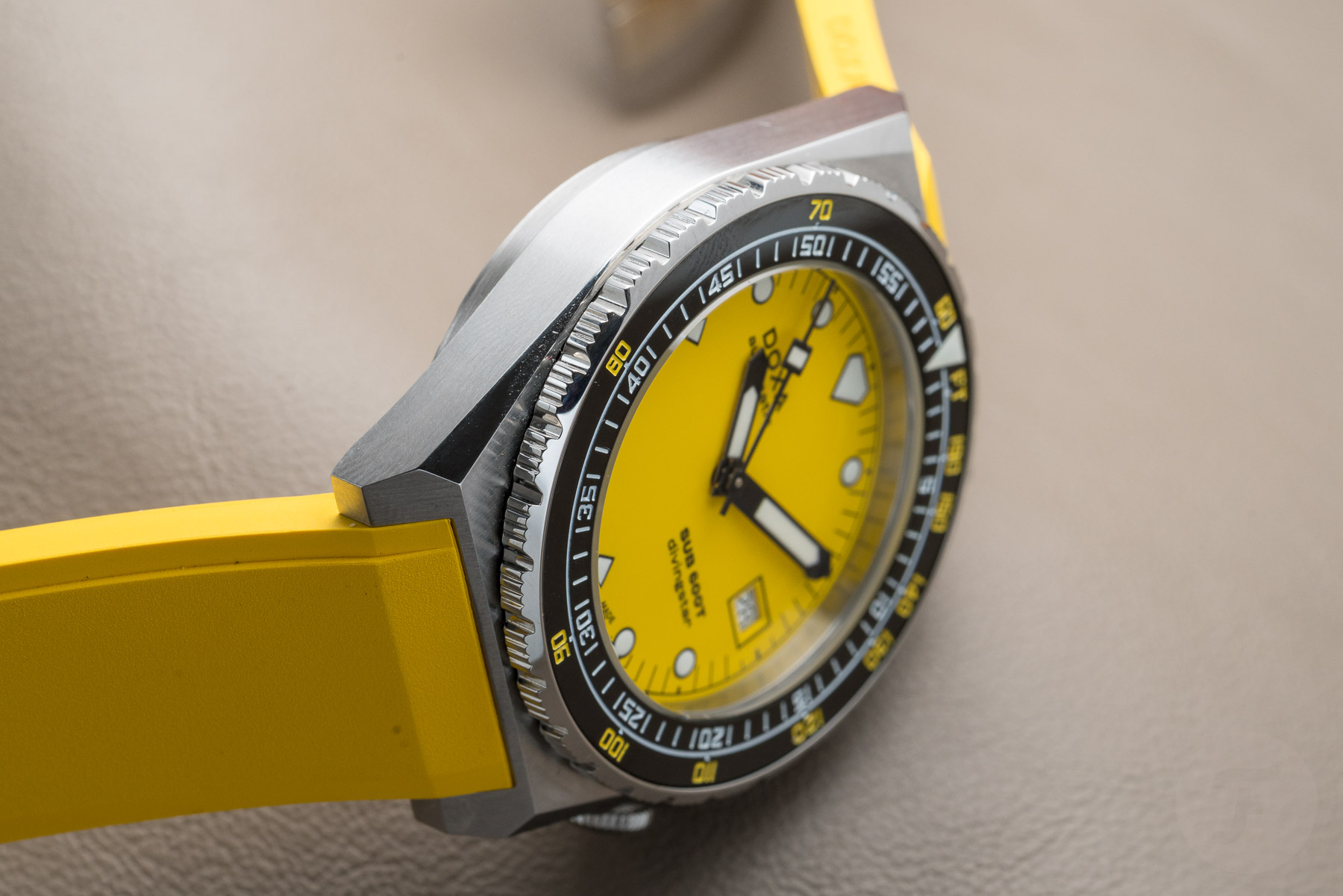 Six different dial colors are available — orange, silver, black, navy, yellow, and turquoise (Professional, Searambler, Sharkhunter, Caribbean, Divingstar, and Aquamarine respectively). As if the wide range of color options available was not enough, Doxa has decided to offer these six models with either steel or ceramic bezels. Both options feature the brand’s patented no-deco markings. The dial, with its signature Doxa asymmetrical text layout, also features a date window at 3 o’clock, small round hour markers, and big “shark tooth” hour markers at 6, 9, and 12 o’clock, all of them filled with Super-LumiNova. This material can also be found on the watch’s bold hands, which are white and orange on the Sharkhunter and Caribbean models, and glossy black on the rest. Note also that the ceramic bezels are black, with the exception of the Caribbean, where the ceramic matches the navy blue tone of the dial. 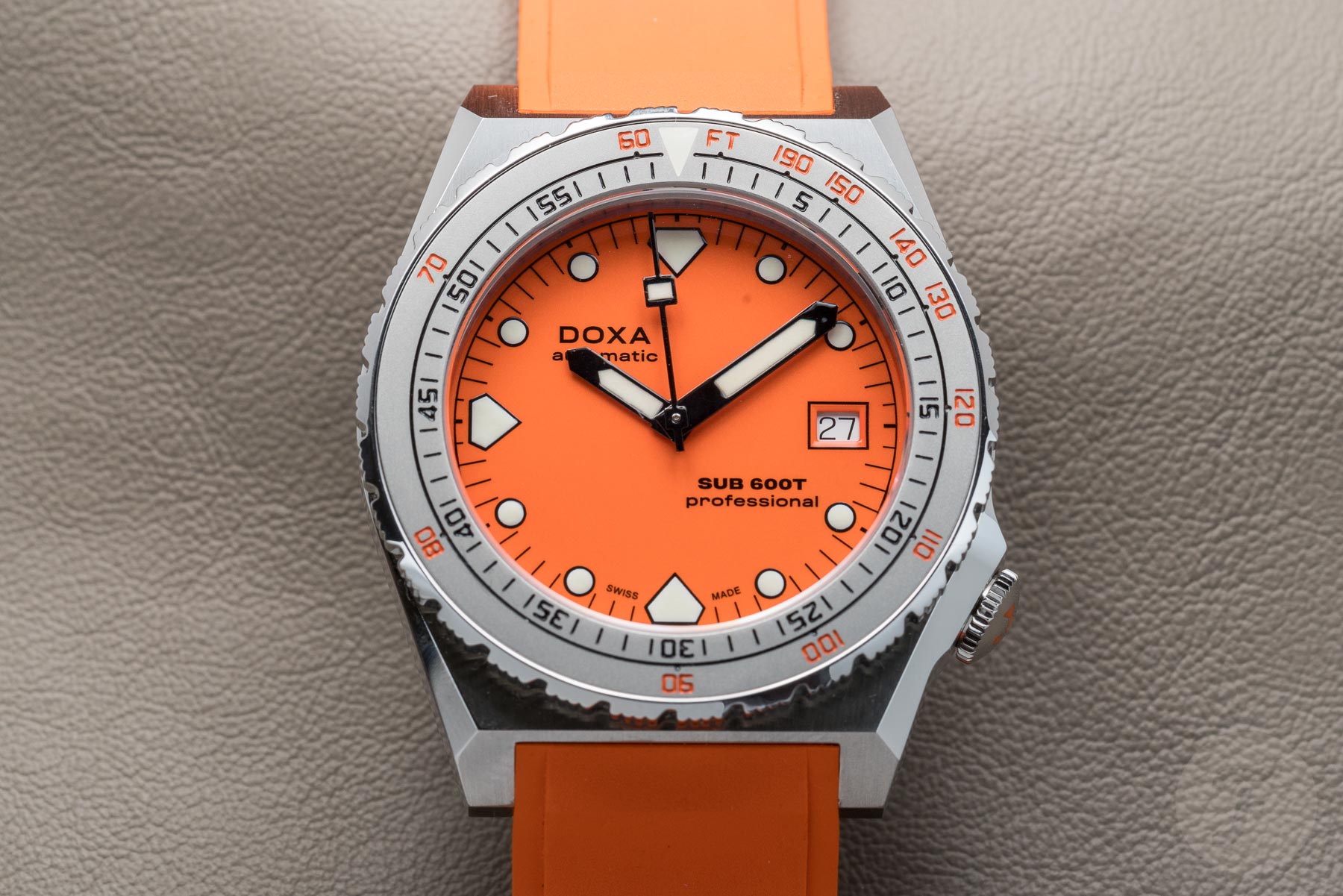 These six different colors, when coupled with ceramic and steel bezels, make for 12 different options to choose from. However, with the choice of both a stainless steel bracelet or a rubber strap, there’s a grand total of 24 different options to choose from! Not only that, but the price is also quite a treat, with the steel-bezel variant coming in at CHF 1,390 on the bracelet or CHF 1,350 on a rubber strap with a signed deployant clasp. The ceramic bezel models will run you an extra CHF 100 on top of those prices. However, the exciting thing about this is that the new SUB 600T comes in at just over the price of the SUB 200, and below anything else in the Doxa catalog. Check out just five of the 24 available combinations below:

I think most of you will agree that this is nothing but good news from everyone’s favorite dive watch brand, but I’d still love to hear your thoughts on the SUB 600T in the comments below!

For more information check out the Doxa website here.