The new DOXA SUB 600T Pacific is here at Geneva Watch Days 2021 and we have live pictures. It’s not every day that we get a new case design from the smaller brand, so fans are understandably excited. The should be because this release looks like a good one.

Over the last year, DOXA has been busy with some relatively exotic dive watches. The carbon-cased SUB 300 models have certainly been popular. Our main man Balazs has been a notable fan while I was a bit skeptical. I finally saw it in the — errrrr, carbon, and I was impressed. It’s a neat addition and slightly out of left field, which is laudable. Still, when I think of DOXA, I think of retro goodness and metal. The new DOXA SUB 600T Pacific delivers on all accounts. 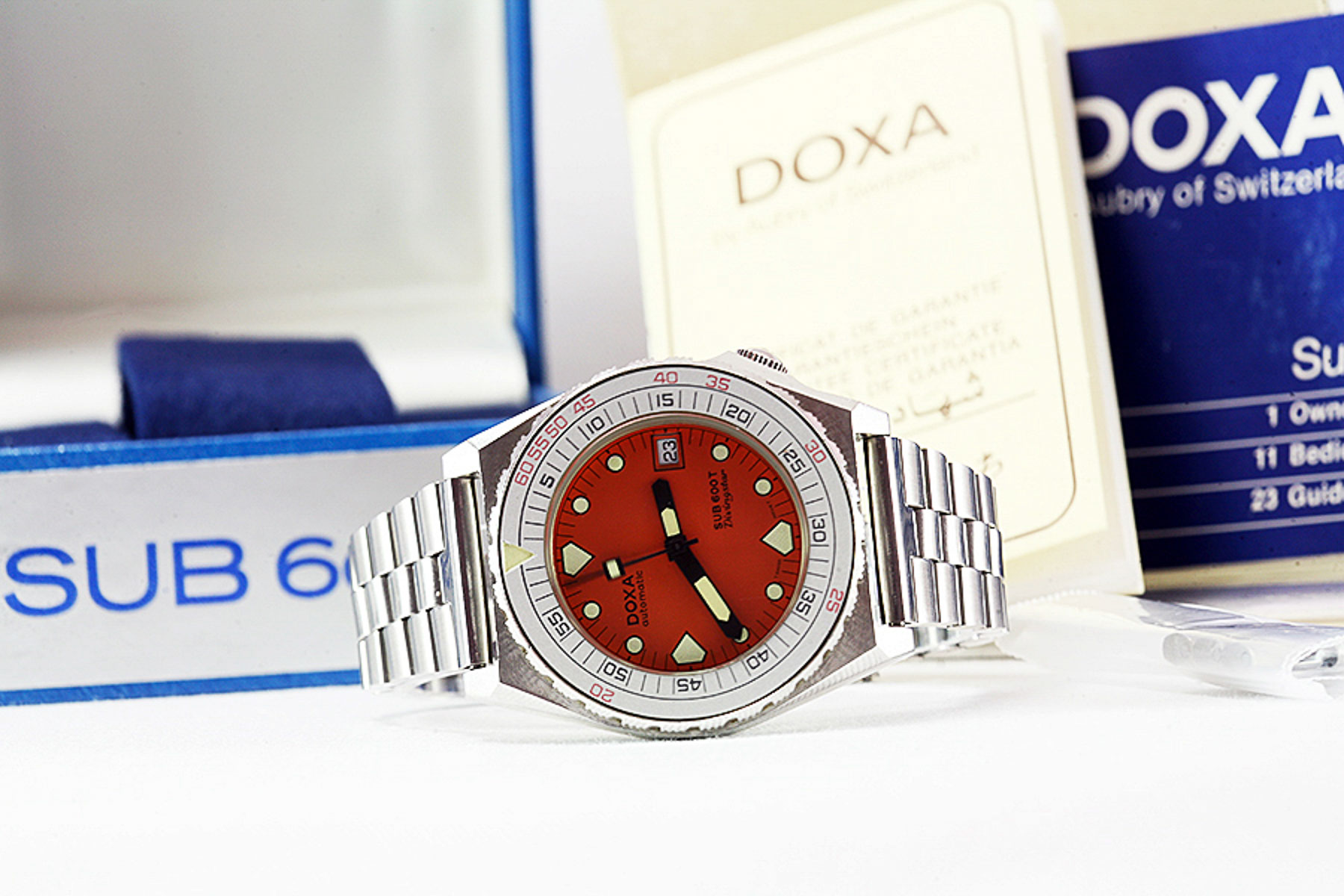 The DOXA SUB 600T Pacific takes its inspiration from the ’80s. At this time, DOXA released an edgy watch more in keeping with the era. That meant an angular 39mm case, loads of tritium, and an interesting crown position at 4:00. These watches, issued in several colors, are known as “Aubry-era” pieces due to the then ownership of DOXA by Aubry Frères. To be very open, up until very recently, these watches were borderline undesirable to general collectors. Hardcore fans of the brand loved them, but a couple of things have occurred to draw in more interest. Firstly, the ’80s are hot. Blame people in my age group and the whole “Radwood” trend. Second, good vintage 300T models are now pricey and hip. That has led to more sleuthing around the brand’s back catalog. 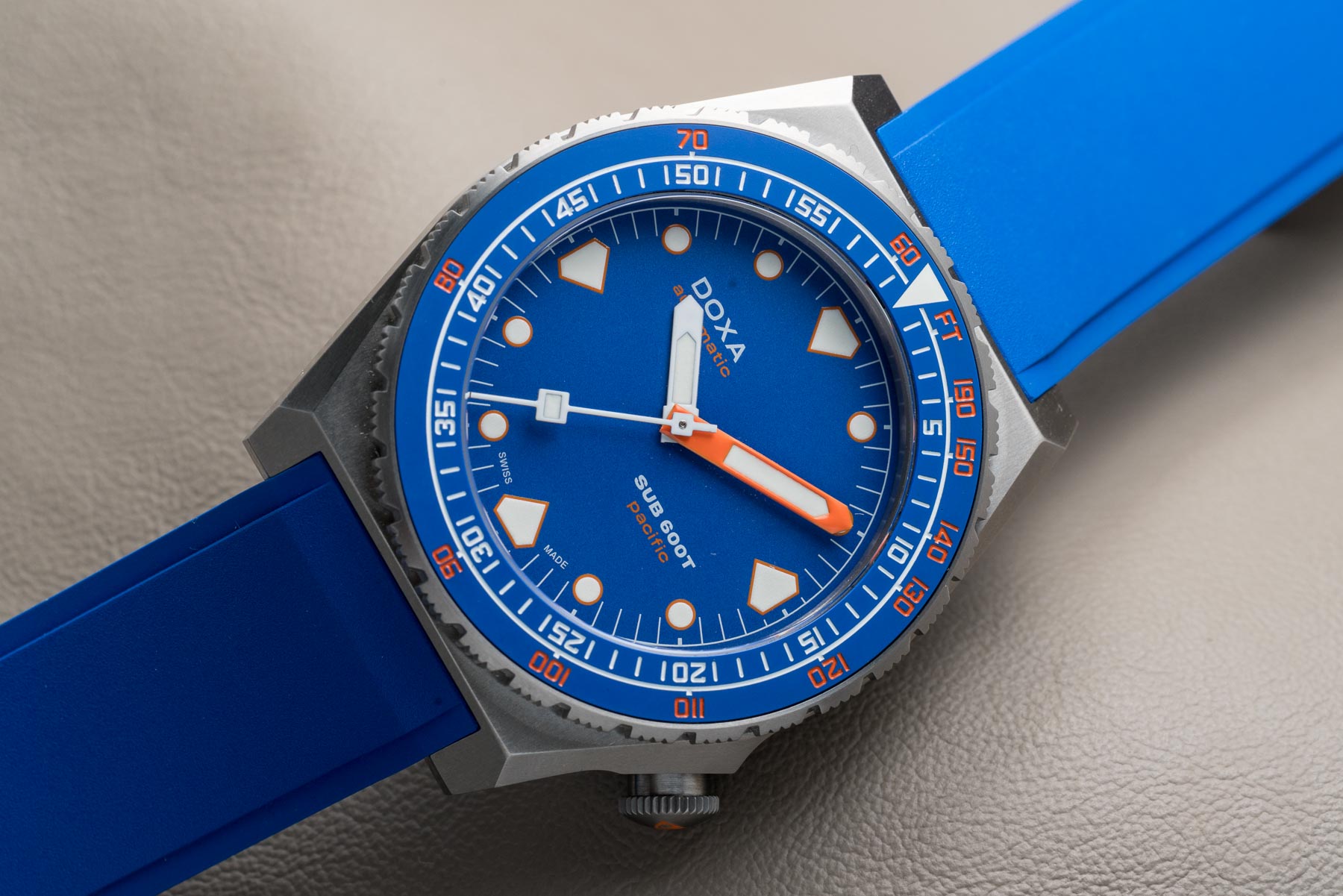 Our friends over at Time & Tide actually partnered on the new DOXA SUB 600T Pacific. Hence, the reference to the body of water (filled with some big toothy critters) that surrounds their nation. The result, in my view, is a cool reissue with a unique colorway and titanium case instead of steel. The case on the Pacific has been upsized, but only slightly, to 40mm with a length of 47.60mm. Then, whereas the original models all had matte silver inlays showing the hallmark “no-deco” bezel, this model has a blue ceramic version to match the dial. Finally, note the lack of a date complication. 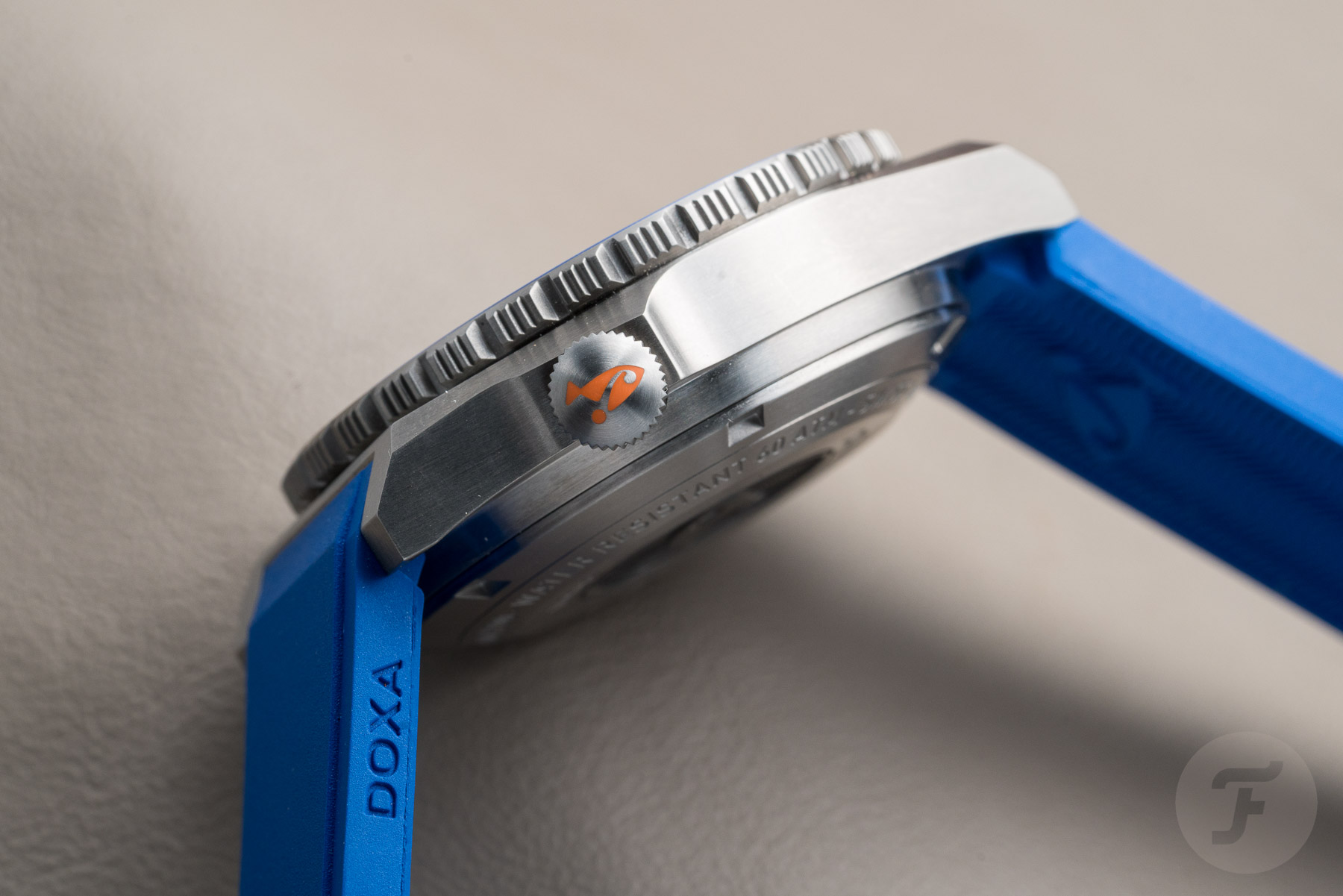 The traditional orange from SUB Professional models makes its way to the DOXA SUB 600T Pacific in a subtle, but noticeable way. It surrounds the printed Super-LumiNova indices on the “shark tooth” dial, is used on the bezel, the minutes hand, some verbiage, and makes its way to the crown logo. DOXA has been here before with blue and orange, but other watches use a darker hue and it typically describes pieces using the “Caribbean” name. 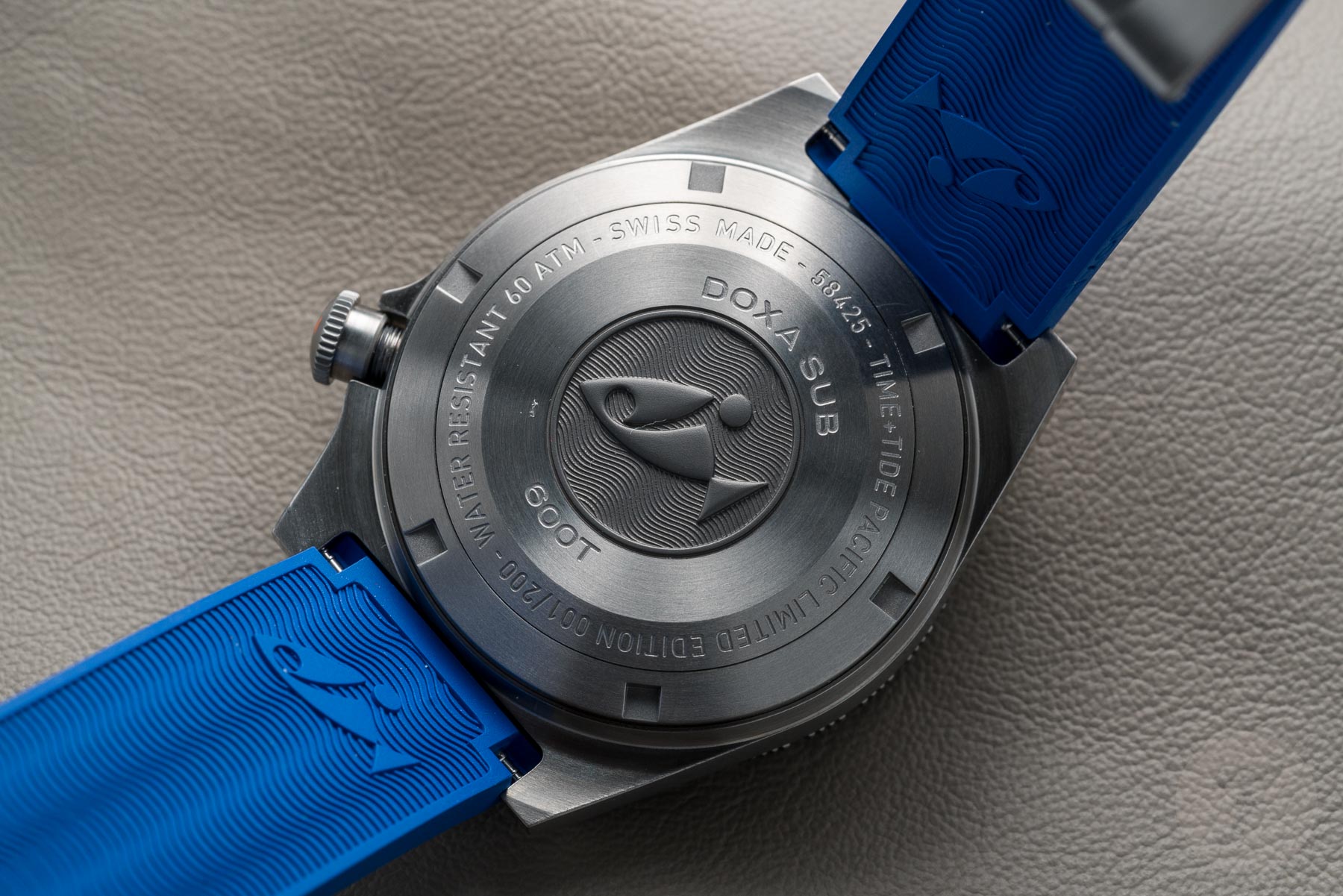 Sharp finishing and no helium valve

The new DOXA SUB 600T Pacific looks really well-finished from the profile pictures. Sharp edges, fine brushing, and clean notches on the unidirectional bezel look the part. Ditto that on the case back with the DOXA fish logo. Notably, despite 600 meters of water resistance, there is thankfully no helium valve to be seen on the flanks of this sharp diver. 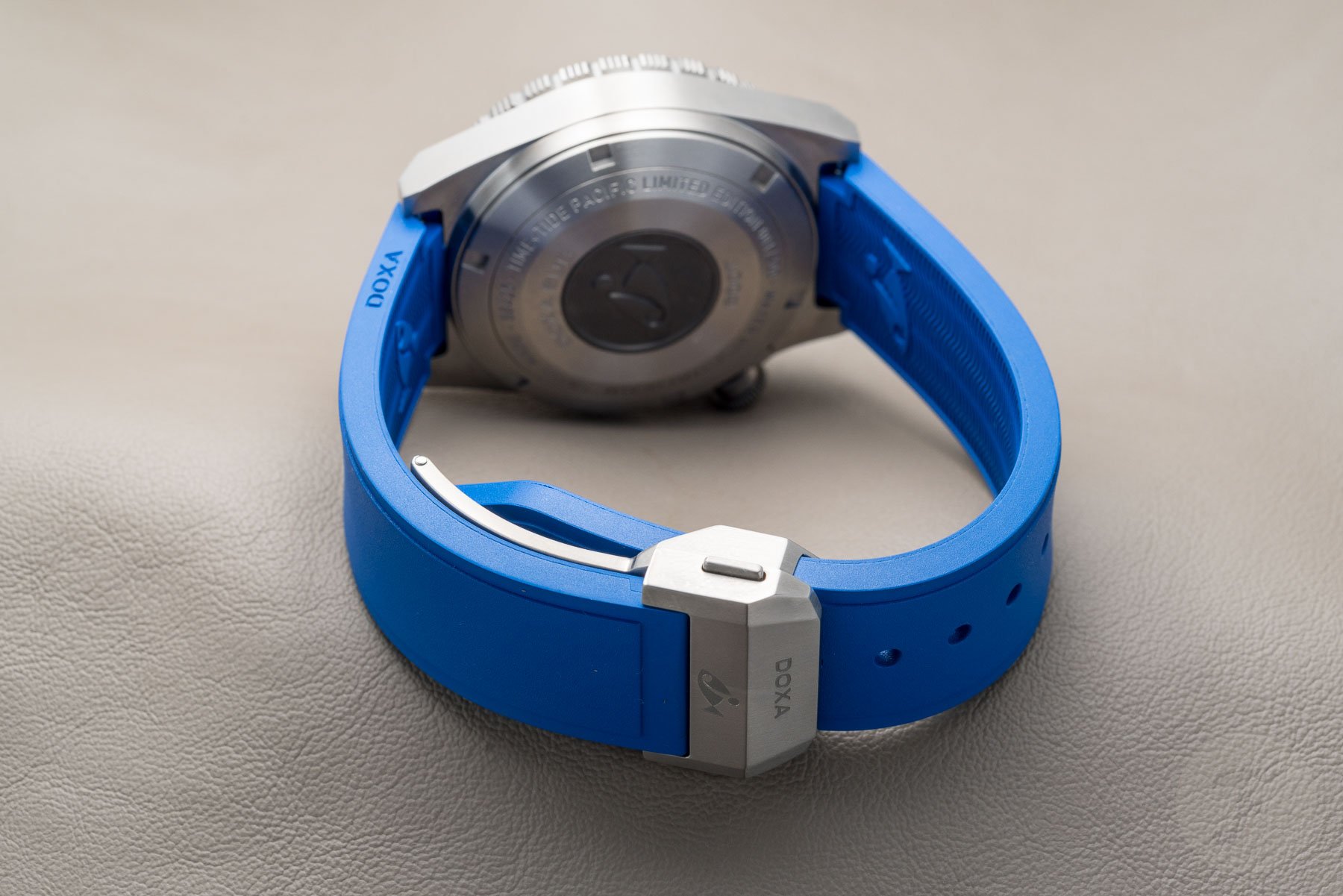 Other details of note

The dial-matching rubber strap is rather noticeable and is the only choice of accompaniment for the new DOXA SUB 600T Pacific. What I like is that the new push-button deployant buckle looks like a welcome step up from the stamped beads-of-rice buckle we’re used to on other steel models. Regarding, the movement, DOXA simply lists it as a hacking Swiss automatic with a frequency of 28,800 vph. Our money is on a Sellita, which is perfectly fine. 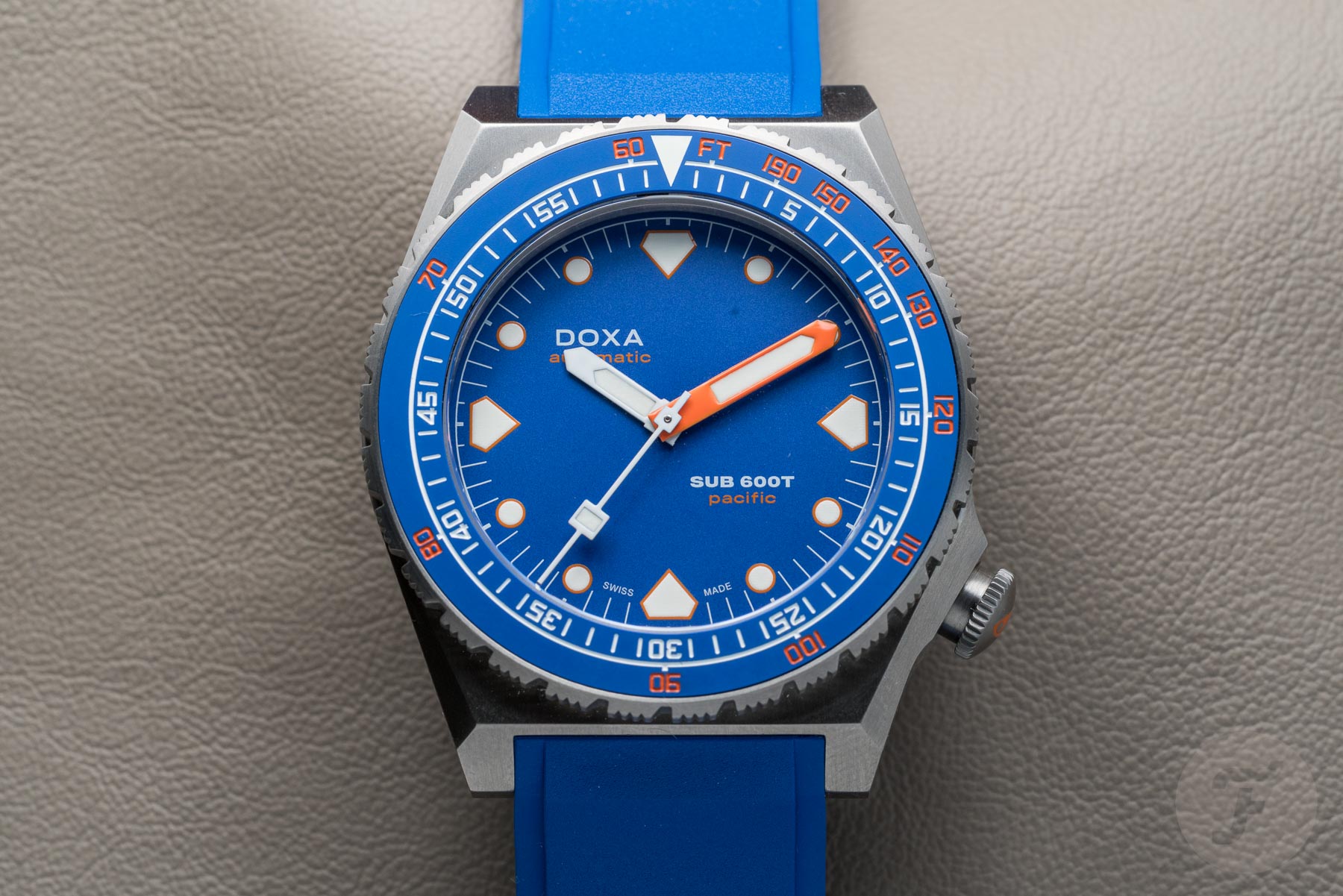 I like the fact that we now have DOXA models from the ’60s, ’70s, ’80s and today. This new DOXA SUB 600T Pacific is a seriously fun release and there’s really nothing that bothers me aside from the fact that all 200 numbered pieces are already sold out! Yes, this watch had a retail price of $1,990 and the pre-order button is now no longer an option. If you’re fortunate enough to have a DOXA retailer near you (more locations are on the way), give them a jingle to see if you can score one of their allocated pieces when they arrive in October. Failing that option, the only thing we can hope for is that DOXA will release additional colors at a later date to make greater use of all the work that went into this design. Fingers crossed!