I seem to be on a roll this week with a renaissance for large watches. Personally, I’d been taking a break from the small and the svelte, wearing the only two 44mm+ watches I have left (a quirky Schofield and the Seiko Marinemaster 300). Then, as if a sign from the heavens, the press images of the new Greubel Forsey Balancier S² hit my inbox. The timing couldn’t have been more appropriate.

When I first set eyes upon the Balancier S², I immediately recognized the case and bracelet from the Greubel Forsey GMT Sport. When I found the case had been up-sized by 4.5mm, the words “too big” didn’t even cross my mind. To me, it was clear that even with a larger diameter, the Greubel Forsey Balancier S² would still be a paragon of large-cased comfort. 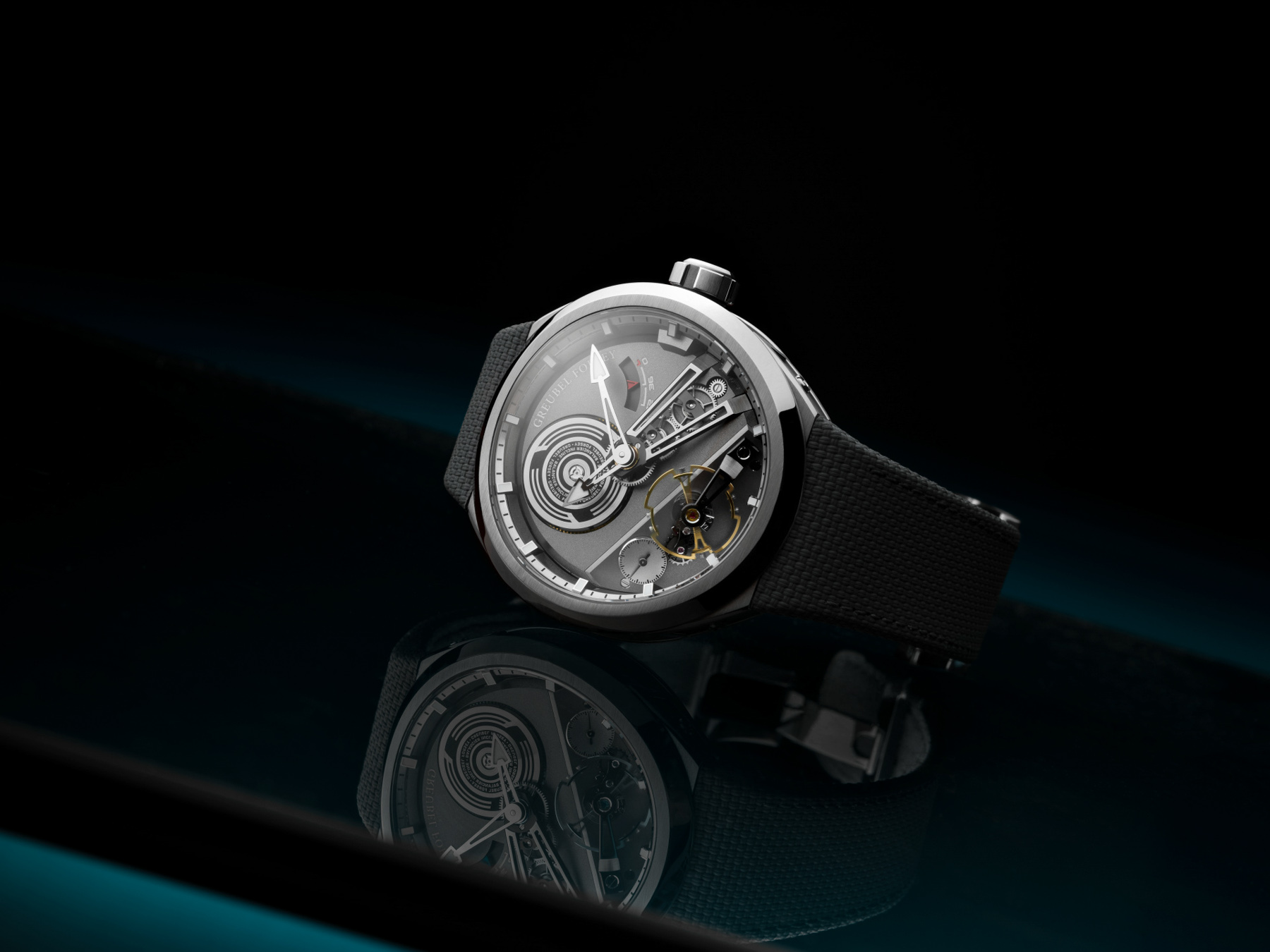 This is not me lavishing praise on press shots alone (even if they are mesmerizing). For what seems to be a considerably sized technical tour de force, the intrinsically detailed Greubel Forsey case and bracelet embody top-podium smoothness. Through both the magic of titanium and clever curvature, Greubel Forsey has achieved peak levels of comfort for its size. I had the GMT Sport on my wrist at Geneva Watch Days, and it made a lasting impression. I have a feeling that Mathilde from the PR department was ready to grab me as I was edging closer to the terrace of the hotel suite. Did I consider abseiling down and making a run for a speedboat waiting on Lac Leman? It certainly crossed my mind, as the comfort was as incredible as the dial was pure horological por… ahem, hypnotism. 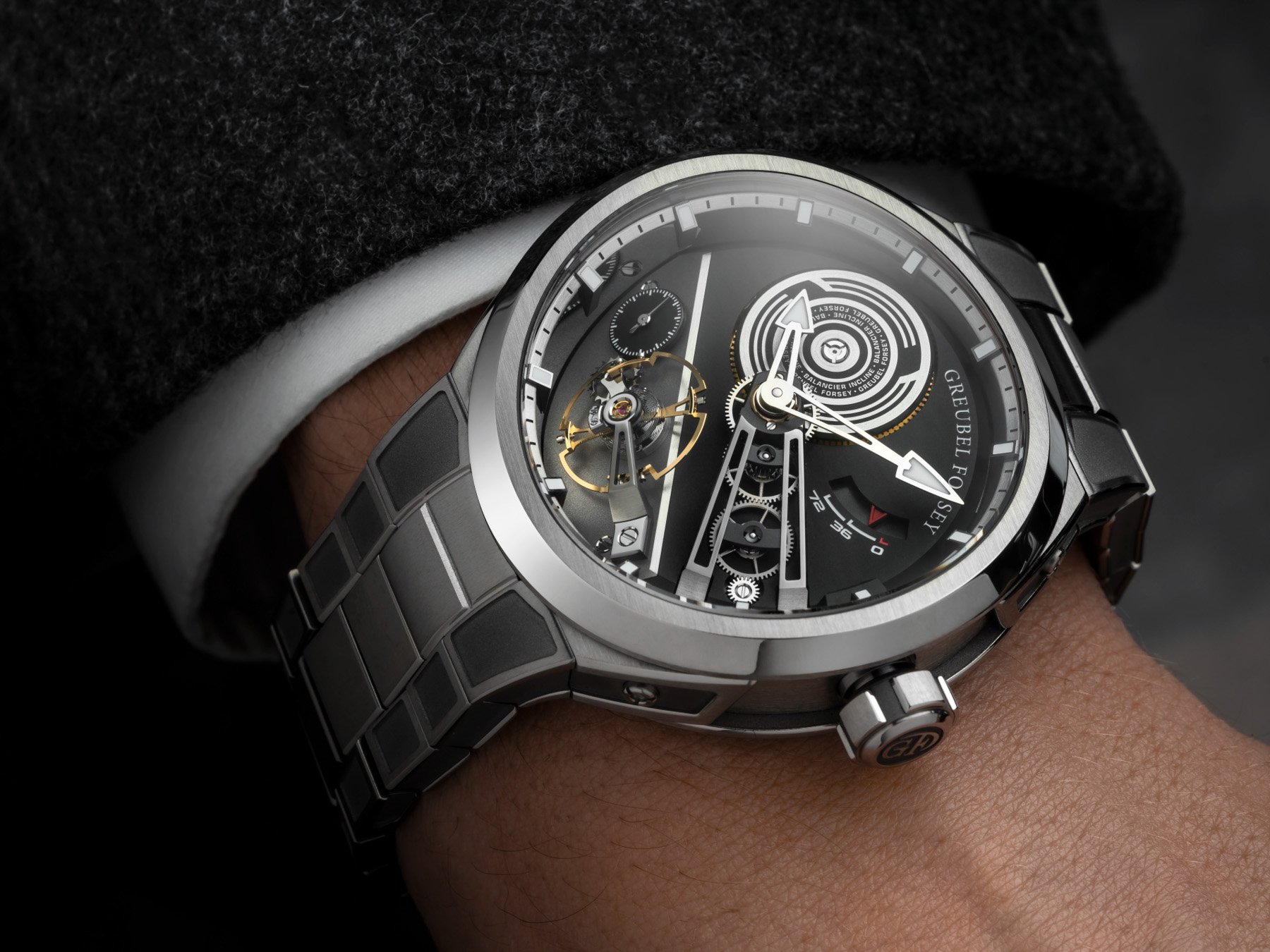 An angular, darker side to Greubel Forsey

How can I explain the ergonomic mastery? The case, with its curved oblong shape, sits better than, well, most anything of its 46.5mm size. And the base is even smaller, at just 43.5mm. Most preconceptions of large-cased watches are based on flat case designs with thick case backs. Combined with straight lugs, they will give you that floating brick sensation. But the lug-less, curved design of the Greubel Forsey Balancier S² is entirely different, believe me.

At over CHF 200,000, it is a considerable investment, but one that baffles you with its level of hand finishing. This is even before you get drawn in by the dial architecture. It does not have any right to be this good on the wrist. And the bracelet? It’s as smooth and light as it looks. The outer links have a recessed, grained center, while sharp chamfers make you question the challenge of titanium. Believe me, it is rather hard to master, machine and polish, but this is a textbook example of craftsmanship. 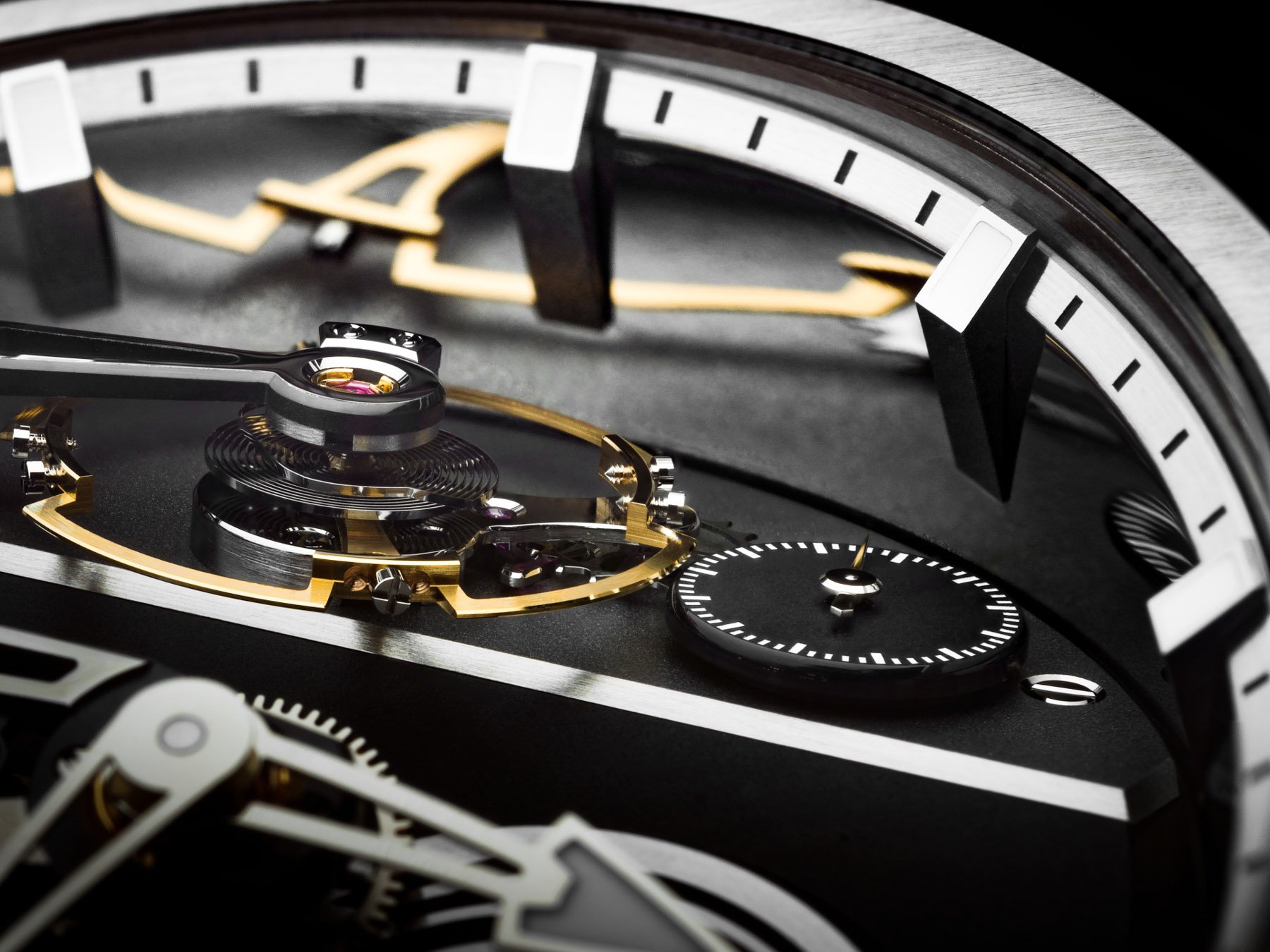 The dial that won’t let you go

Framing the captivating dial is the geometric bezel. It has a distinct, visibly striated, brushed flat top that sets off the polished sides. And then you notice the micro-architecture within the depths of the dial. This is where we see a sharpening of the Greubel Forsey image, toughening up an already muscular piece. Though calling it a mere dial seems almost banal, the execution is anything but. The rehaut has an angled chapter ring with sharp, weapon-like indices surrounding the open-worked scene like sentries. At ten o’clock, under a smooth Art Deco-esque cover, sits the barrel with its 72-hour power reserve. Sharper lines and bolder contrast set the Balancier S² apart from the eclectic and colorful GMT Sport. Gone is the exuberant blue dazzle, replaced with serious elegance and a dark edge. 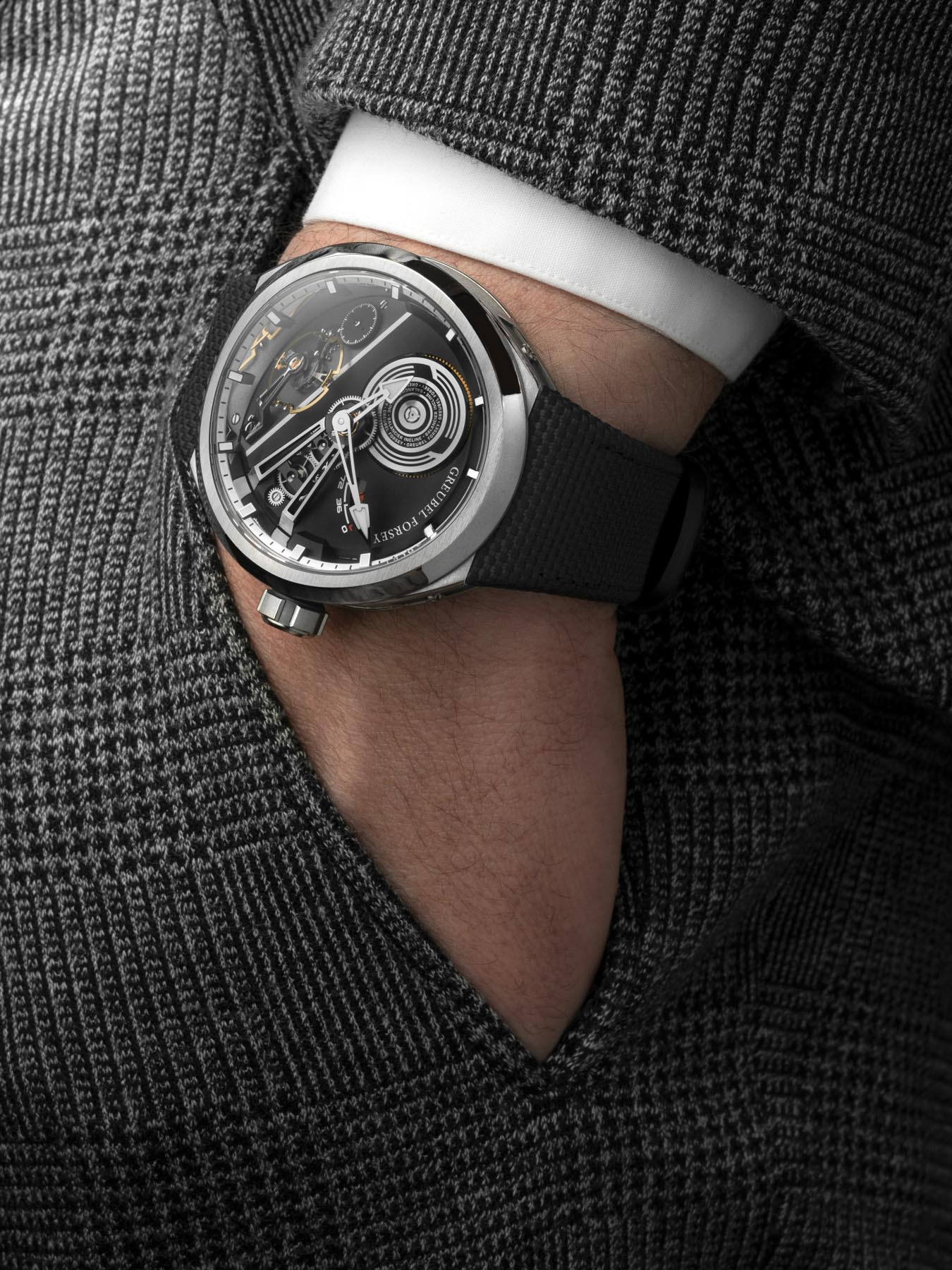 A monochrome scene with a dark touch

Setting a muted tone is the matte, hand-grained dial, finished in either charcoal or light gray. A brushed bevel slices through it from 5 to 9 o’clock, creating a dramatic separation between its upper and lower levels. The seconds register and beautifully finished balance wheel angle towards you, letting you enjoy their mechanical life without so much as flicking your wrist. The central double-arched titanium bridge which holds the gear train is open-worked, and like the GMT Sport, it is topped with a skeletonized handset. The only pop of color is the judicious use of red, seen on the 0 numeral and pointer of the power reserve indicator at 2 o’clock. Each detail is perfectly finished, from the anglage and recessed screw on the balance bridge, to the hand-polished bevel of the balance wheel itself. 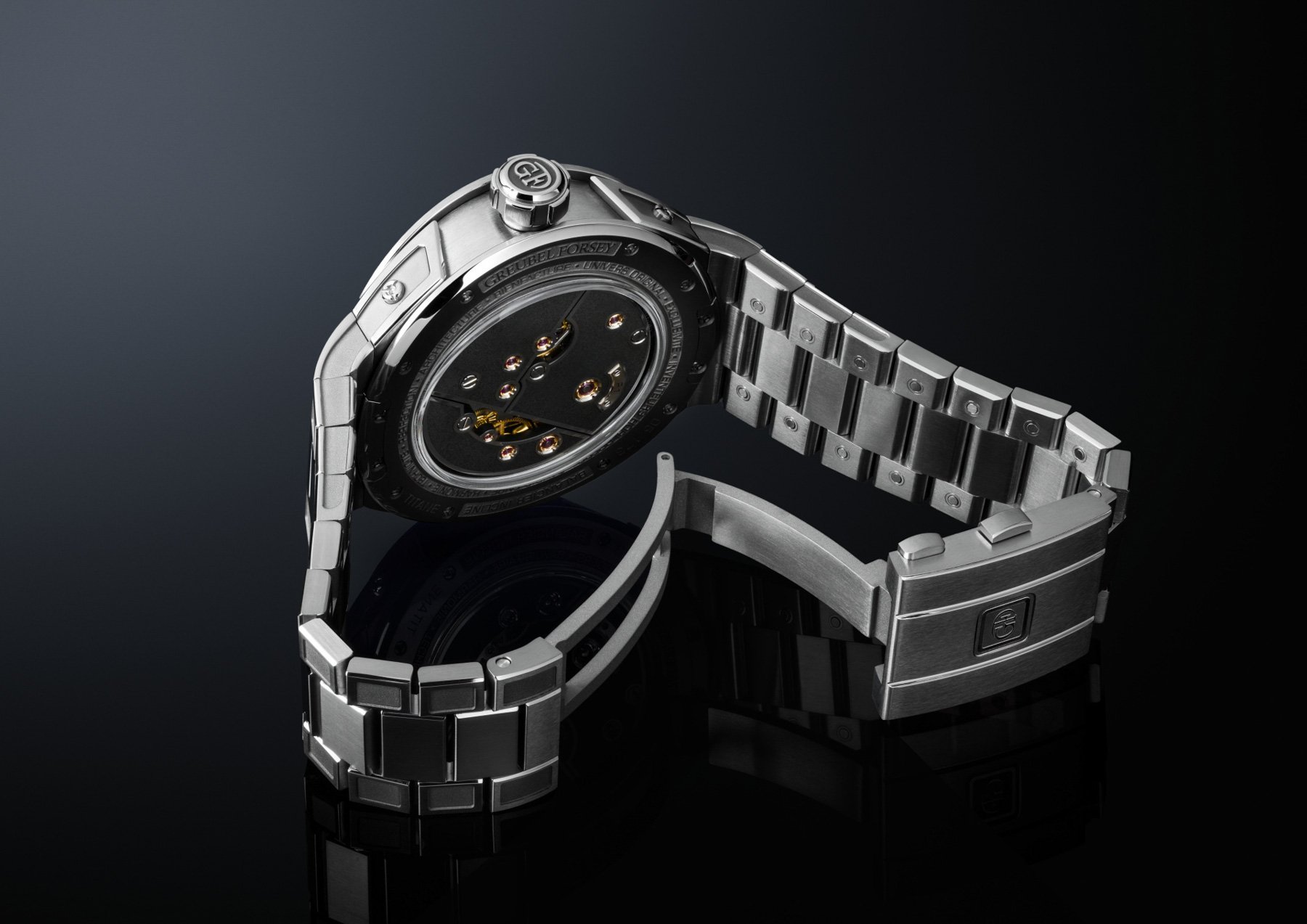 Both references of the new Balancier S² exhibit a sharp side of the Greubel Forsey glamour we know. It’s a glamour seen through dramatic technical details and dial complexity, rather than a flash of color or gems. Here we see a serious, sharper, and monochrome aesthetic that underlines the pure technical craftsmanship in each watch. It’s a futurist vision of telling the time, infused with Greubel Forsey character. Yes, if you boil it down to the bare facts, this is a time-only watch with power reserve and small seconds indicators. But that’s where all comparisons stop, as the Balancier S² in itself is more complex to engineer than a watch with three or four more complications. 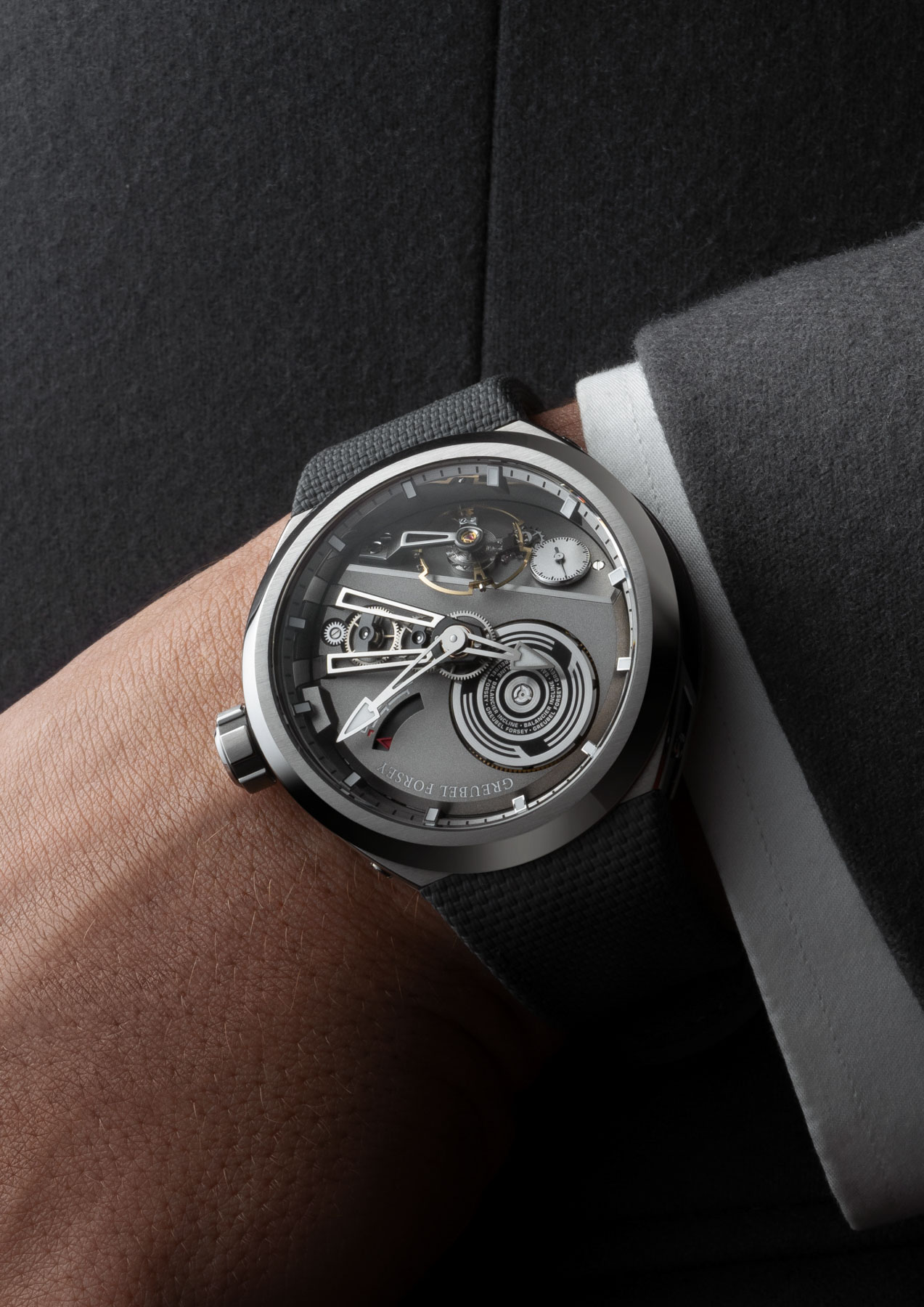 A conclusion with the power of 2

Why am I so enamored with the Balancier S²? Because it’s an utterly complex interpretation of the simple task of time-telling. The single-minded focus of Robert Greubel and Stephen Forsey shines through in every detail, and this shine is nothing but captivating. But don’t let the complexity scare you. With a height of 13.75mm (15.75mm including the curved crystal), this is a 100m water-resistant sports watch. Incredulous as it may seem, GF doesn’t want its flagship trooper to languish inside a safe. And I’ll second that, as life’s simply too short for safe queens.

Only 88 pieces of this new Balancier S² will be made for the version with a charcoal gray dial, for a total of 22 pieces per year from 2022 to 2025. As standard, it will adhere to Greubel Forsey’s new policy of non-animal material for all straps. This one comes in rubber with texture in relief and a titanium folding clasp with an engraved GF logo. For the light gray version, 16 pieces will be released annually over the next four years, for a total of 64 examples. Both versions will come in a titanium case. With a strap, the price is CHF 205,000 + tax, while on the titanium bracelet, the price of perfection is CHF 245,000 + tax.

Any Greubel Forsey could easily be my grail watch, but what about you? Let us know what you think in the comments. Would you be tough enough to wear a CHF 200,000 watch while enjoying the active lifestyle it craves?