Is the update worth all the fuss?
Dave Sergeant
comments 5
Share

My very first watch was a dive watch — a Breitling Superocean, to be exact. While I had technically qualified as a diver at that point, I never chose it to be a diving companion. I chose it because I liked the chunky and indestructible look, as I wasn’t the most careful with my belongings at that point in my life. I wanted something that would survive my somewhat lackadaisical lifestyle. As such, I’ve always had a bit of a soft spot for dive watches. So, when US-based microbrand Nodus first got in touch about its upcoming Avalon II dive watch, I was intrigued and obviously keen to see more.

Nodus is a brand that’s been kicking around the microbrand scene since 2017. Five years is pretty good going for a microbrand. Any brand that makes it this far is doing something right, and that counts for a lot in this sector of the industry. I’d followed Nodus for a while, even before I started writing for Fratello. Back in the days when I used to use Facebook, I was a part of many different microbrand-focused groups, and enthusiasm for Nodus always ran high. Comments usually focused on its quality watches, good value for money, and excellent customer service. Until now, though, I’d never actually seen one of its watches in hand. So, does the Avalon II go the distance and live up to my lofty expectations? 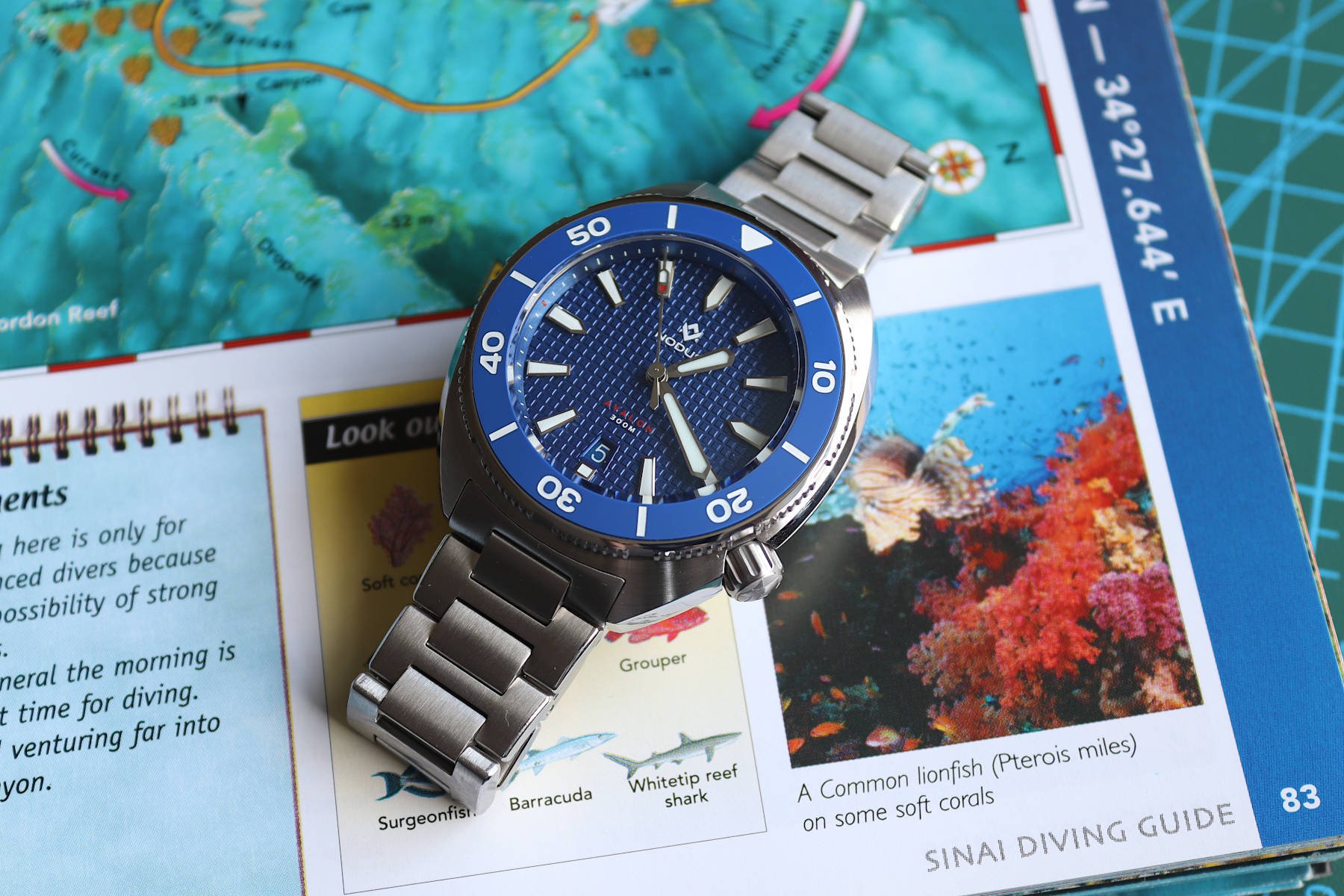 The Avalon II is a 43.5mm dive watch. That’s slightly larger than the average dive watch in the microbrand scene these days. However, a larger size is not a bad thing for a watch that has aspirations to be a professional dive instrument. That said, Nodus employs a few subtle touches that mean this doesn’t exactly feel like a 43.5mm behemoth on the wrist. First of all, the 48mm lug-to-lug instantly negates some of that size. I’m a firm believer in that case diameter alone does not define how a watch actually presents on the wrist. Visual impact is a complicated beast, determined by a number of variables and measurements. From my experience, the Avalon II “looks” like it’s more in the ~42mm range. 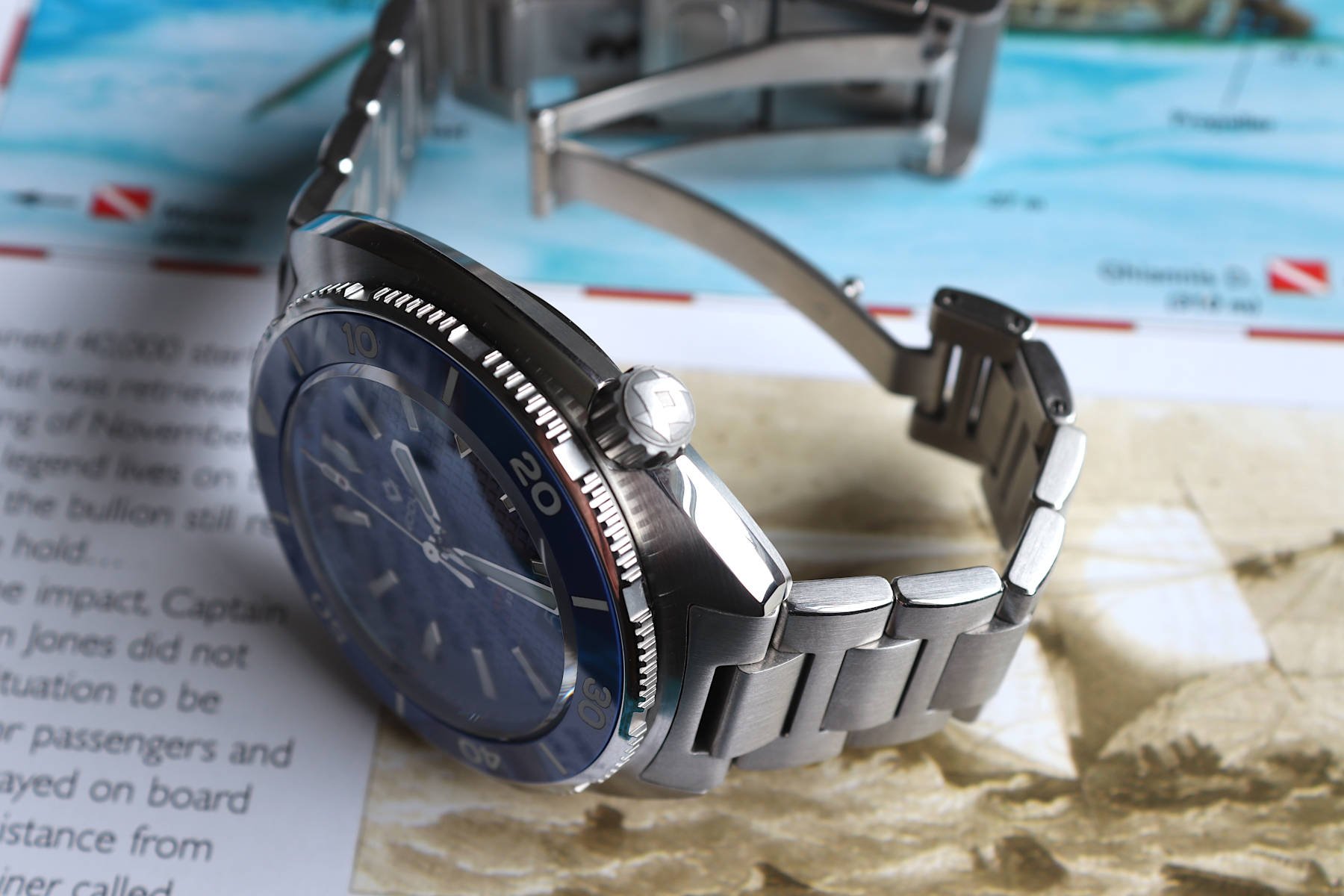 There’s a wide bevel along the underside of the case edge that brings in the feel on the wrist. On the top side, another bevel, albeit slimmer, traverses the shoulder of the case. When viewed from the lugs, the side profile of the case reminds me of the Doxa Sub 300T. That’s another large watch that wears smaller than its specs might suggest. In terms of finishing, the polished surfaces are smooth, and the transitions between brushing and polishing are smooth with zero finish bleed that I could see. 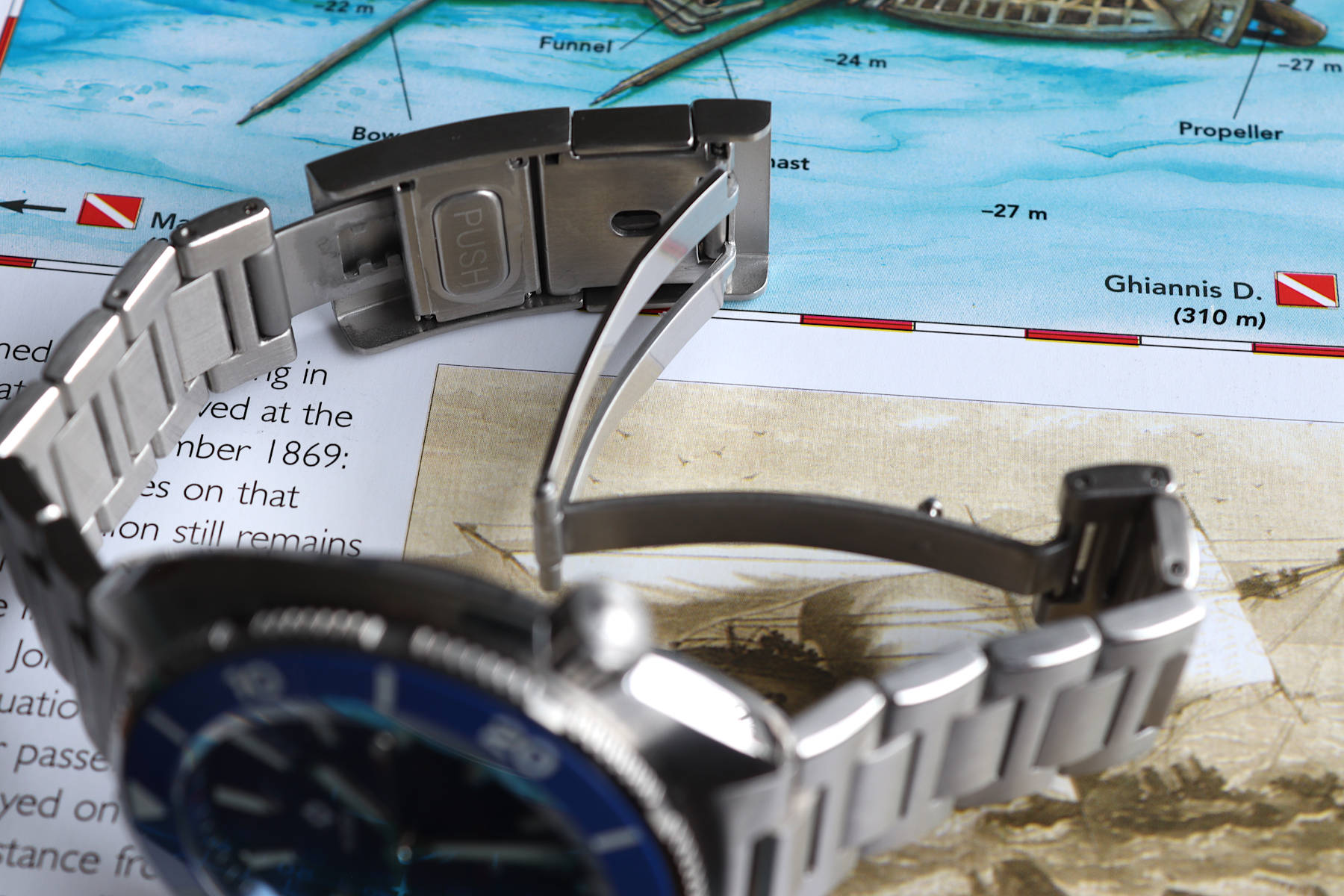 The H-link bracelet was well machined and very comfortable, tapering from 20mm at the lugs to 18mm at the clasp. The clasp is something worth mentioning in particular. The Avalon II features Nodus’s new proprietary NodeX extension clasp. It allows for on-the-fly micro-adjustment without the need for fiddly tools, which is especially helpful if you’re sitting on the edge of the boat, about to start a dive! The side buttons to open the clasp are nicely tucked away and relatively unobtrusive. The only minor gripe I had was that I like my bracelets to wear quite snugly, and sometimes I found that my wrist pressed against the folding mechanism, which, in turn, pressed the extension button. It only happened a couple of times, but it was enough to be worth mentioning. Aside from that, the clasp was miles better than the usual generic micro-adjust clasps that have become commonplace on many microbrand dive watches. 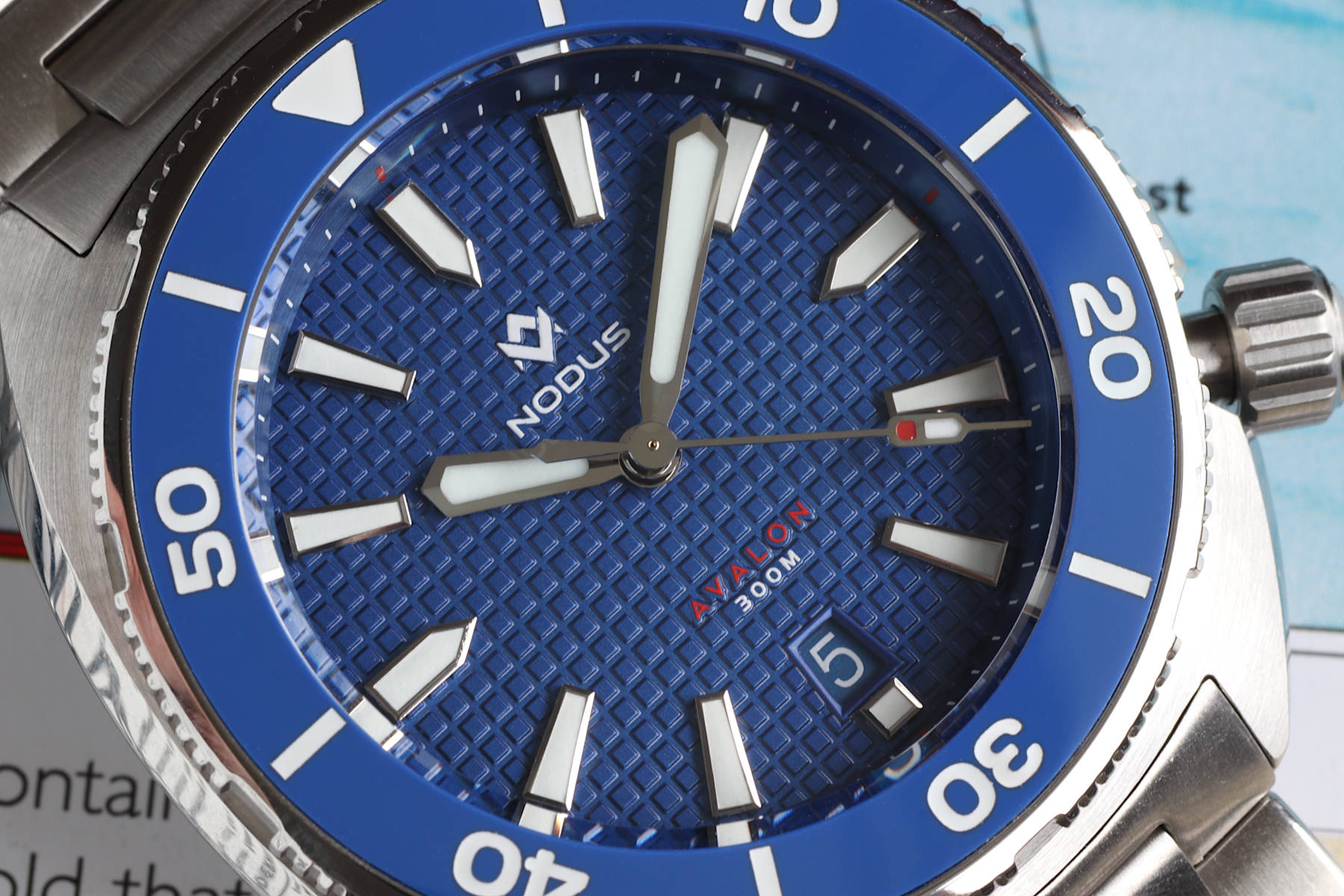 Nodus offers interested parties a choice of four colors for the Avalon II. There’s a black dial (Trench Black) with a matching black bezel for fans of the classic look. The white-dialed version with a contrasting black bezel (Seaspray White) is a touch more modern. It sits nicely alongside the yellow dial, also with a contrasting black bezel (Coral Yellow). I have the final option in hand, the “Pelagic Blue”. The glossy blue ceramic bezel wonderfully complements the rich blue dial. It’s probably my favorite of the four options. 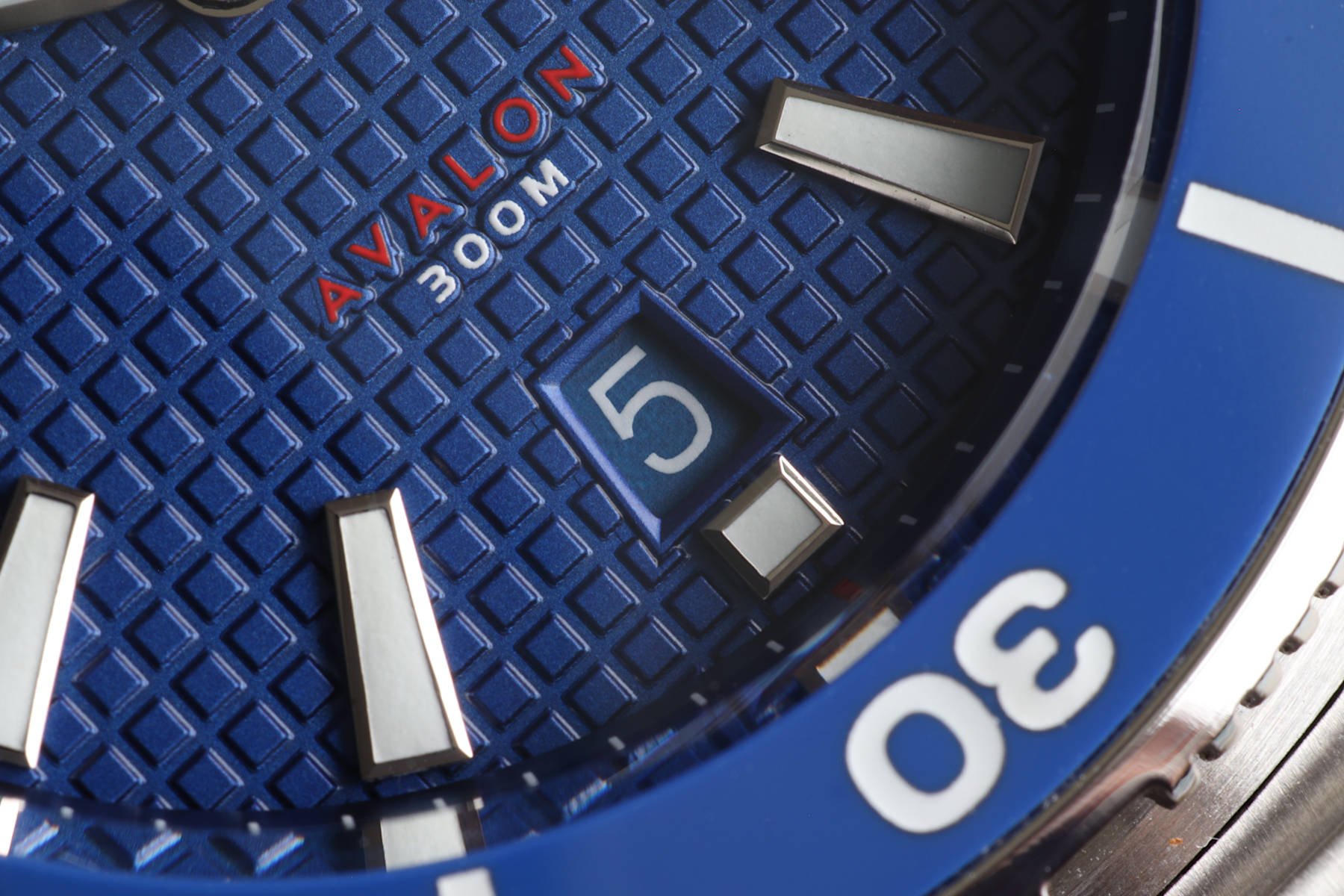 The dial itself has a lovely tapisserie pattern stamped onto it. Often associated with the classic AP Royal Oak, a few other microbrands have recently been championing the wider use of this pattern. In the case of the Avalon II, I think it works rather well. I much prefer a bit of dial detail and texture over a flat matte dial or yet another watch using the “particulate effect” that is so common these days. 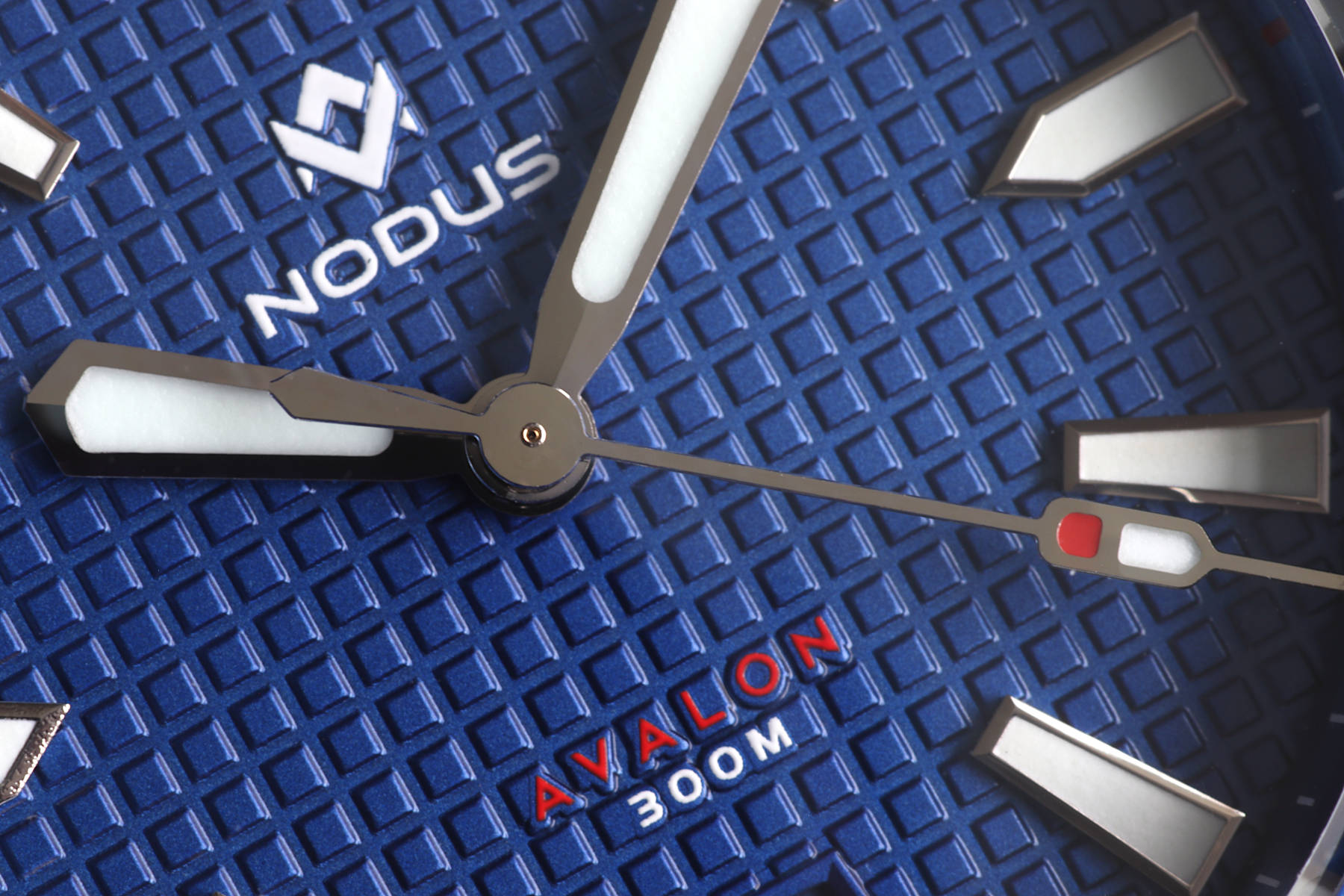 The hands and applied hours markers all have a generous helping of lume for low-light legibility, and they contrast perfectly against the rich blue dial. Dial decoration is minimal, with the Nodus wording and logo at 12 o’clock and “Avalon” and “300m” nestled above the date window at 6 o’clock. 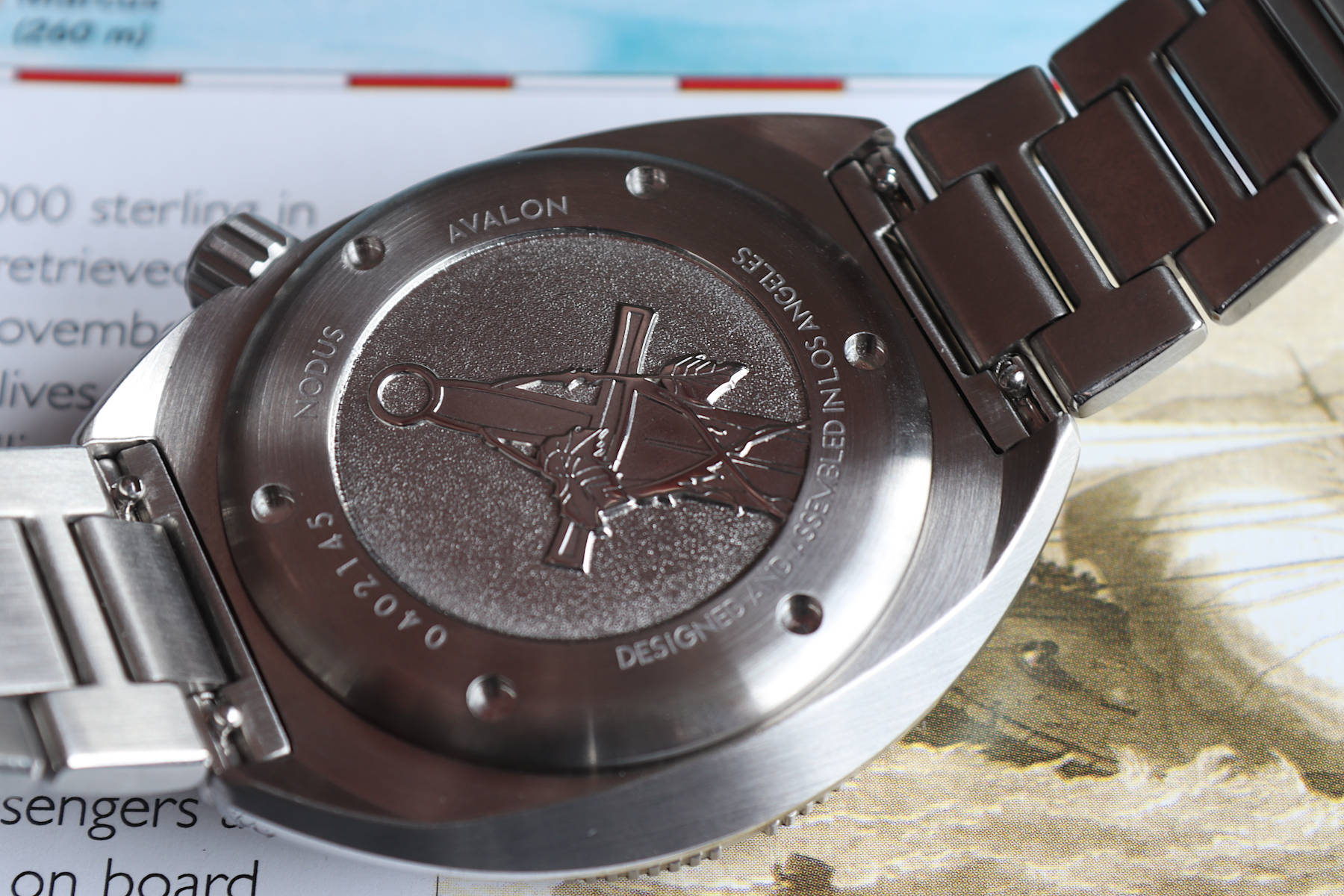 Nodus chose to go with the Miyota 9015 movement on the inside. It’s a solid if unremarkable movement. This Japanese caliber is regulated to ±8 seconds per day in four positions. While I didn’t specifically track the accuracy, I also didn’t notice any significant deviations that would suggest timekeeping outside of those specs while wearing the watch. Reliability and ease of service are arguably the most important thing at this price point. The 9015 movement performs well enough against its Swiss counterparts, and as a Miyota, it allows for a slightly cheaper price point too. I have no issues with the movement choice. Nodus has opted for a closed case back, which is a smart choice here. There’s a stamped sword motif, which ties into the Arthurian theme (Avalon is a legendary island featured in the legend of King Arthur).

As lovely as the stamped case back is, I’d have been happy enough with a simple, plain case back. Unless the design of the case back is something incredible and unique (think Schofield‘s or Laventure‘s case backs), I’d save the costs and offer a little extra saving to the customer. That’s just my opinion, though, and I know some people would rather have something over nothing. 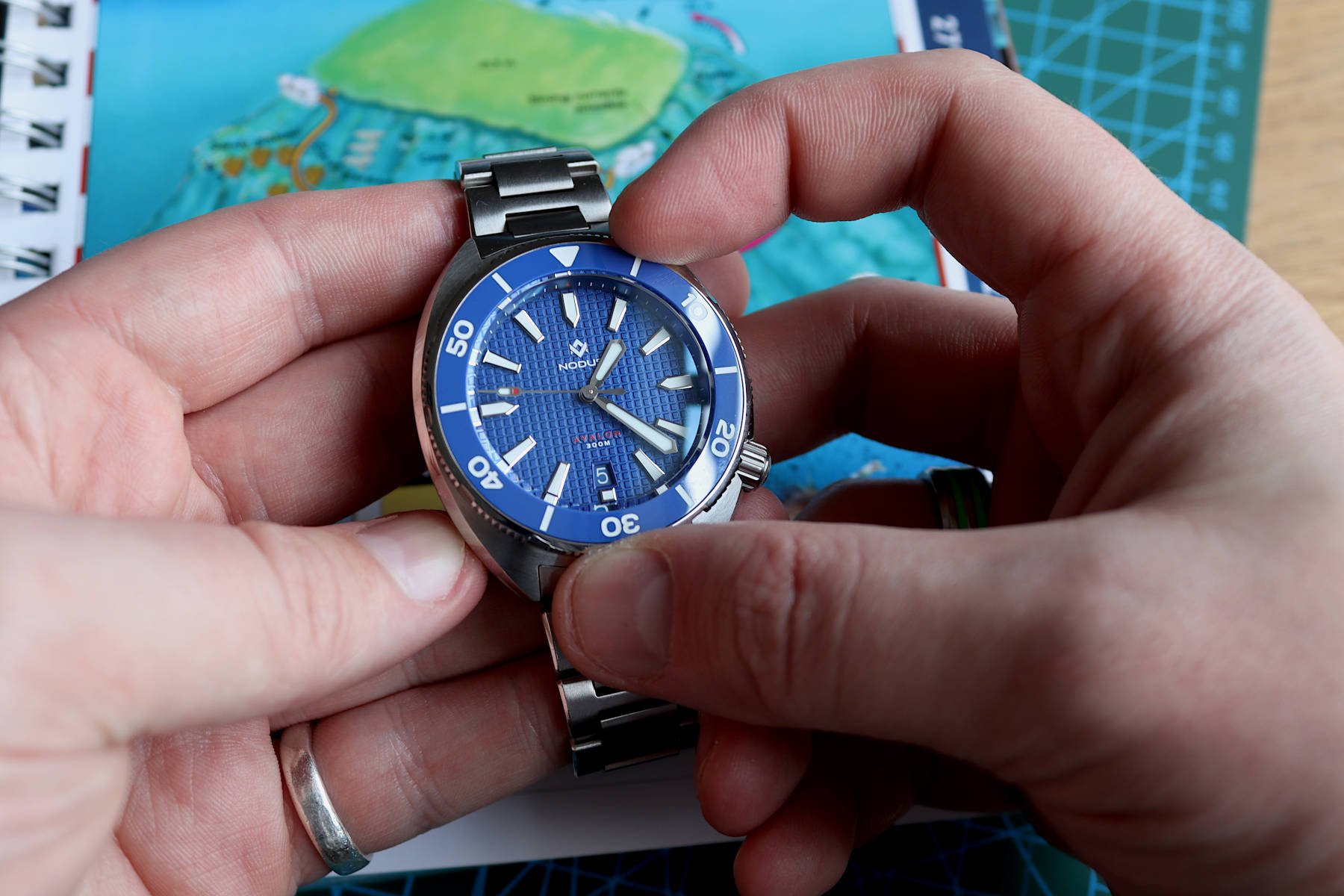 So there we have a deep dive into my experience with the Nodus Avalon II. The real standout feature of the watch is the quality and execution of the case. I feel that case quality is often taken for granted and overlooked by many, but the case is the foundation for any watch design. Even the best dial will fail to inspire in a sub-standard case. Nodus has clearly invested a lot of time and money to achieve this level of shaping and finishing, and it shows. 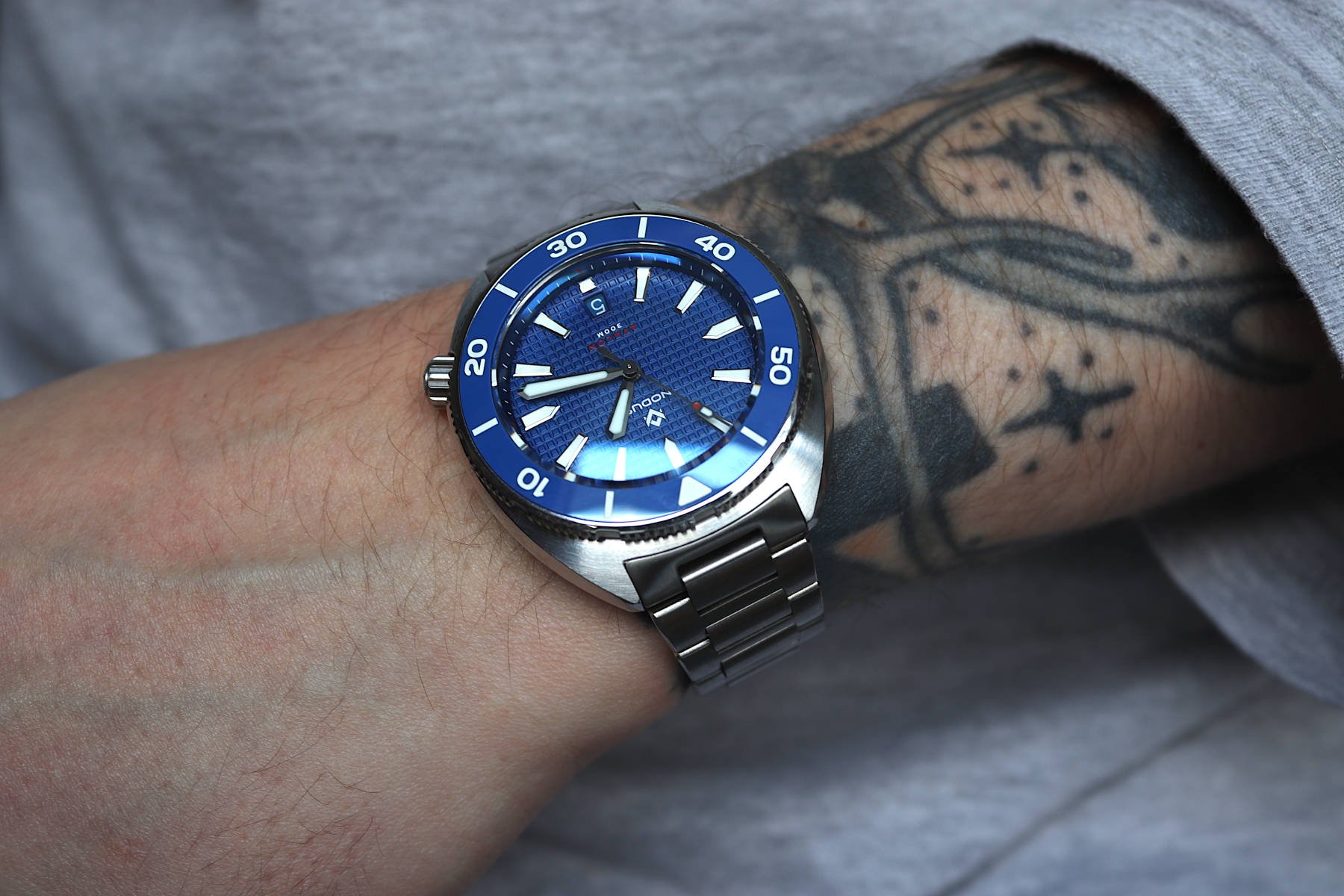 The Avalon II is a leap up in quality from the original Avalon, and I have to applaud Nodus for this. While I never had the original Avalon in hand, from photos alone, I can see the differences in quality — it’s night and day! I’m looking forward to wearing this one over spring and summer this year, as the rich color is just as appropriate for a sunny afternoon in the beer garden as it is beneath the waves. And a 300m water-resistance rating is more than enough for a few pints, right? 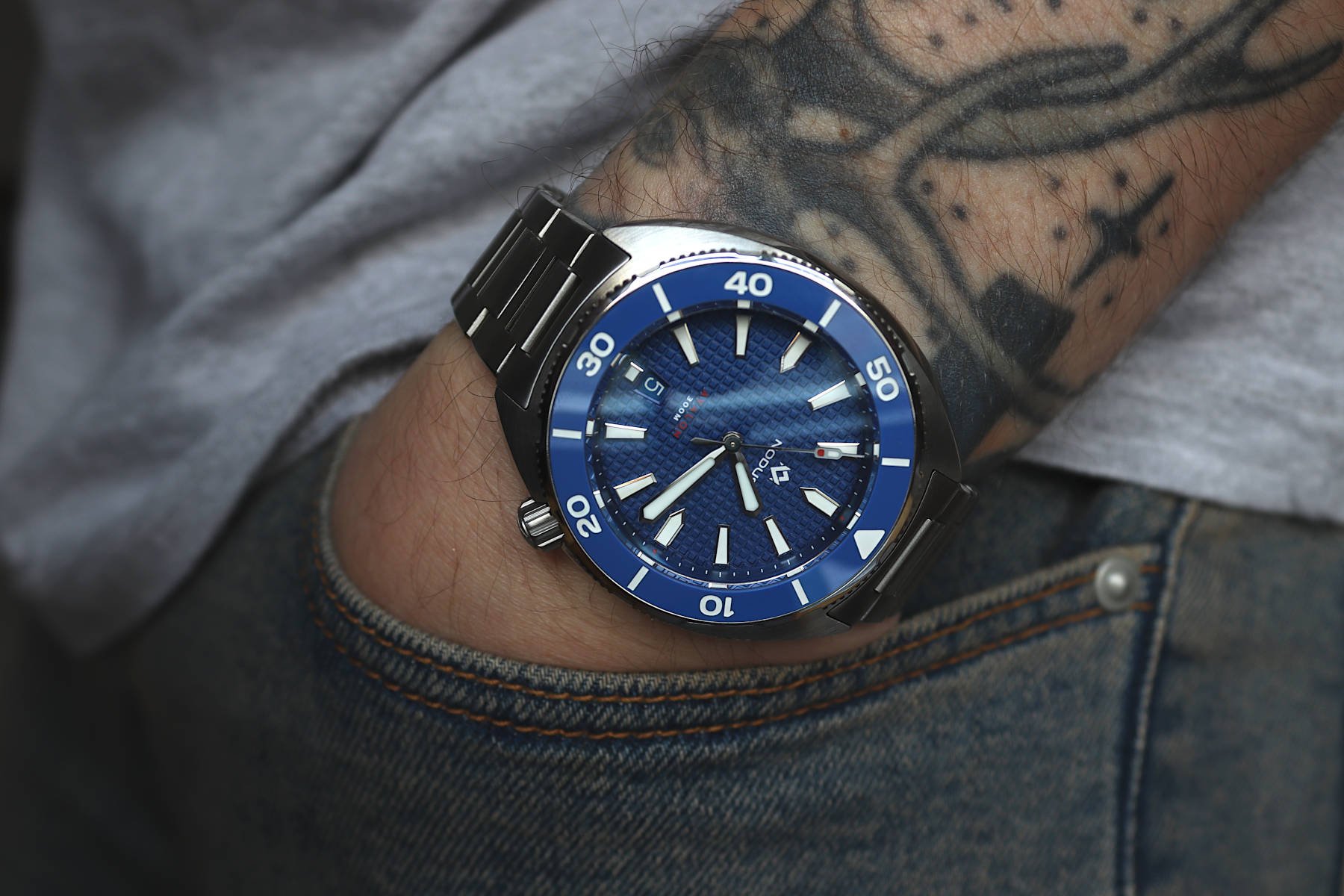 While the first batch of the Nodus Avalon II sold out quickly, Nodus is having a restock, which will be live on its website in May 2022. So you have a couple of months to make up your mind. The Avalon II has a price of $700. Find out more on the Nodus website.