This week has been an interesting one on eBay. Yesterday, we covered the sale of an interesting “panda” Heuer Autavia and today we’ll talk about the sale of an equally rare Blancpain Fifty Fathoms. Before we do that, though, I’ll use this article to give an overall opinion on something: eBay. I have contacts that are reluctant to buy on eBay and while I don’t disagree with their concerns, it is, by far, the largest marketplace for vintage watches. Like any marketplace, it’s fraught with con artists and schemers, but there are loads of honest sellers. In addition, there are also those sellers who are clearing estates and have no idea about what they’re posting. This is typically where the deals come in or, conversely, you have those who list at ridiculously high prices because they think they’ve struck gold.  They feel because it’s old, it’s gold – ever watch an episode of “Antiques Roadshow”? In any case, I still contend that eBay is THE place to go to mine for interesting pieces…you just need to know your stuff or know someone else who can provide good counsel. 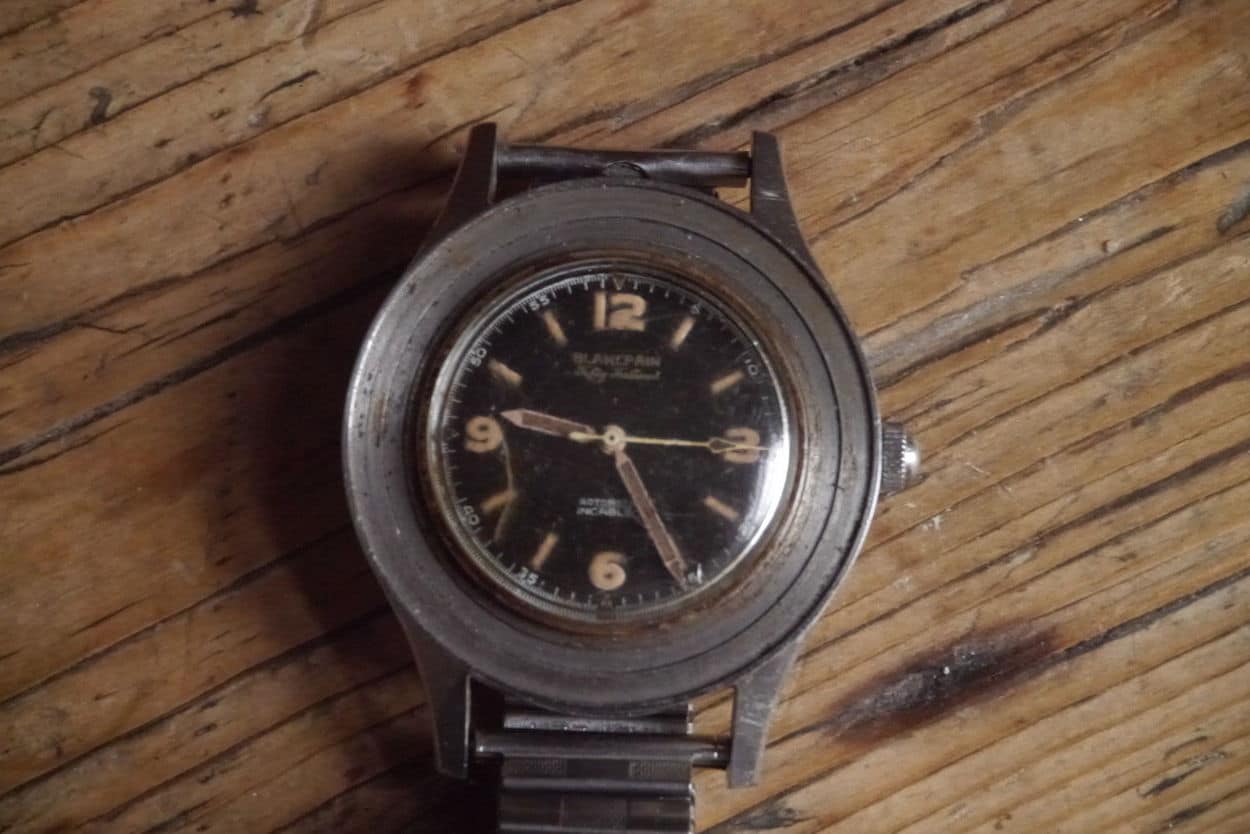 Last week, a seemingly innocuous, if you can label an early Blancpain Fifty Fathoms in this way, popped up on eBay Netherlands. It was missing the bezel, was only featured with three so-so pictures, didn’t show any of the movement shots and was shown on a Spiedel-like bracelet (seriously, an article could be written on the pervasiveness of these stretchy hair-pullers and how they show up on ridiculous pieces). So, the watch looked a bit risky and ultimately sold for 4.250,- Euros. Now look, 4.000,- Euros isn’t money to be “thrown around”, but on an iconic piece like this, the parts alone were likely worth the expenditure. The watch was received, opened and this is where the “magic” began. 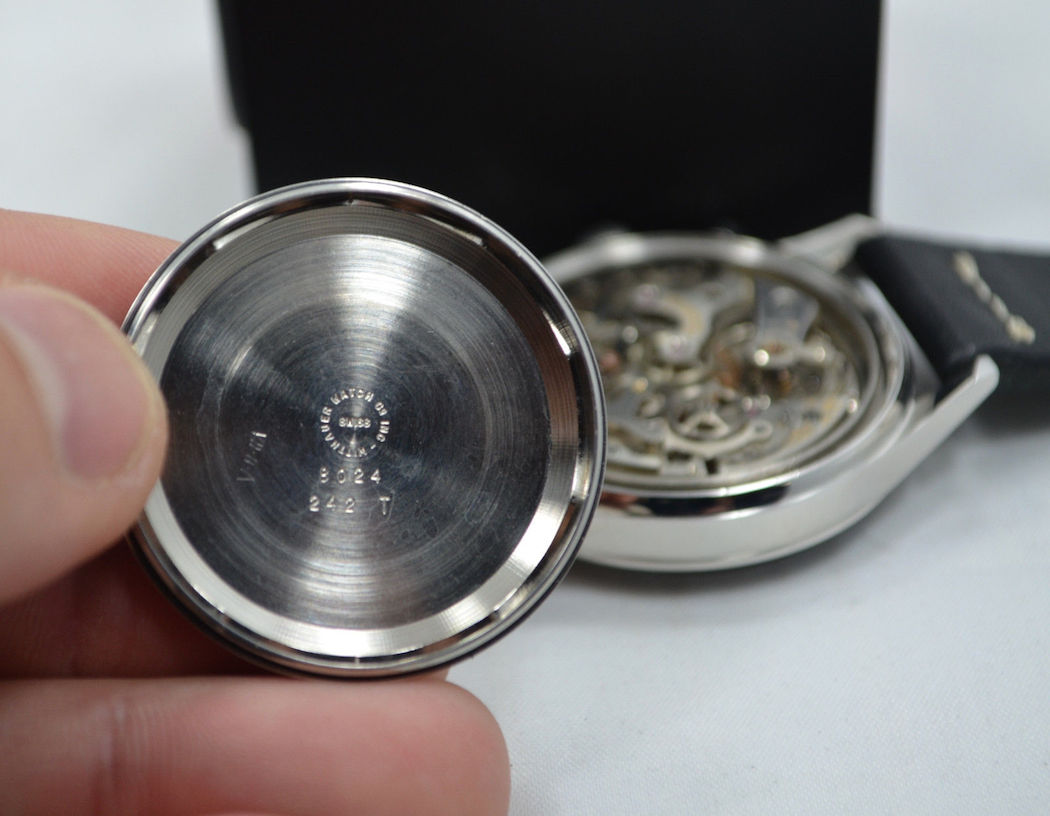 Seller’s photo from ebay.nl showing an original case back with early serial number on the Blancpain Fifty Fathoms

I spoke with Jack Wong, who has a real passion for these early Blancpain Fifty Fathoms, and he shared some details on this amazing piece. You can also find an entire discussion here that captures it in even greater detail. First off, the Blancpain Fifty Fathoms was introduced to the public in 1954, but it was originally designed and released in 1953 as a military piece. The piece in front of us today is actually thought to be one of the first publicly offered Fifty Fathoms. Here’s a brief run-down, courtesy of Jack and some other folks on the forum as to why:

The small dial font is only found on early pieces.  Also, Triangular tips, see the minute hand, were only found on very early models and not seen by the late 1950’s or mid-1960’s. 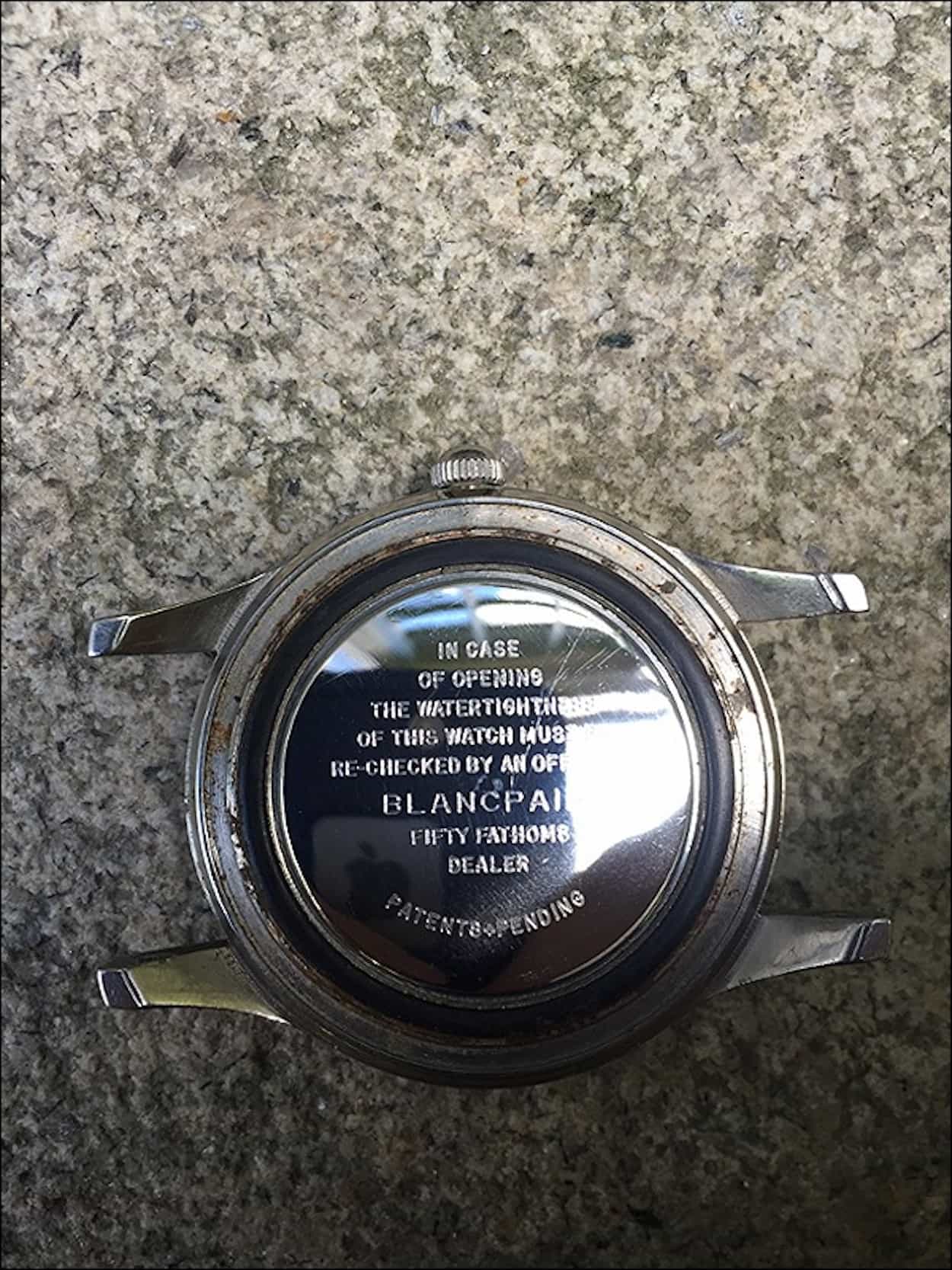 Courtesy of watchprosite.com and user “briandumais”, the “patent pending” dust cover of the Blancpain Fifty Fathoms

A major giveaway that this is so early: the dust cover is “patent pending”. You can almost feel the new owner’s heart palpatations upon cracking this open for the first time and seeing this! 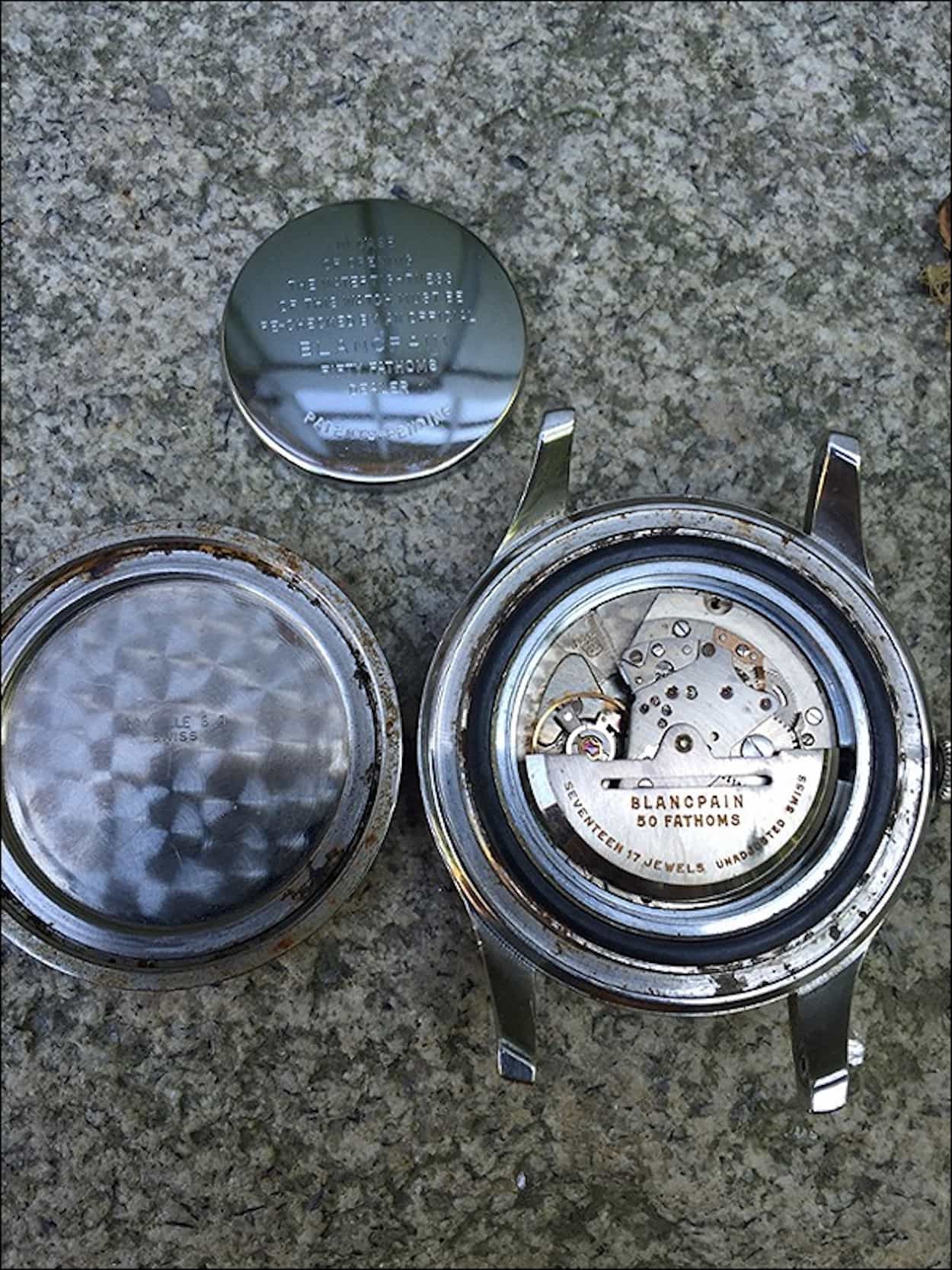 A primitive “50 Fathoms” is stamped on the rotor instead of the later “Fifty Fathoms” or “Rayville”. 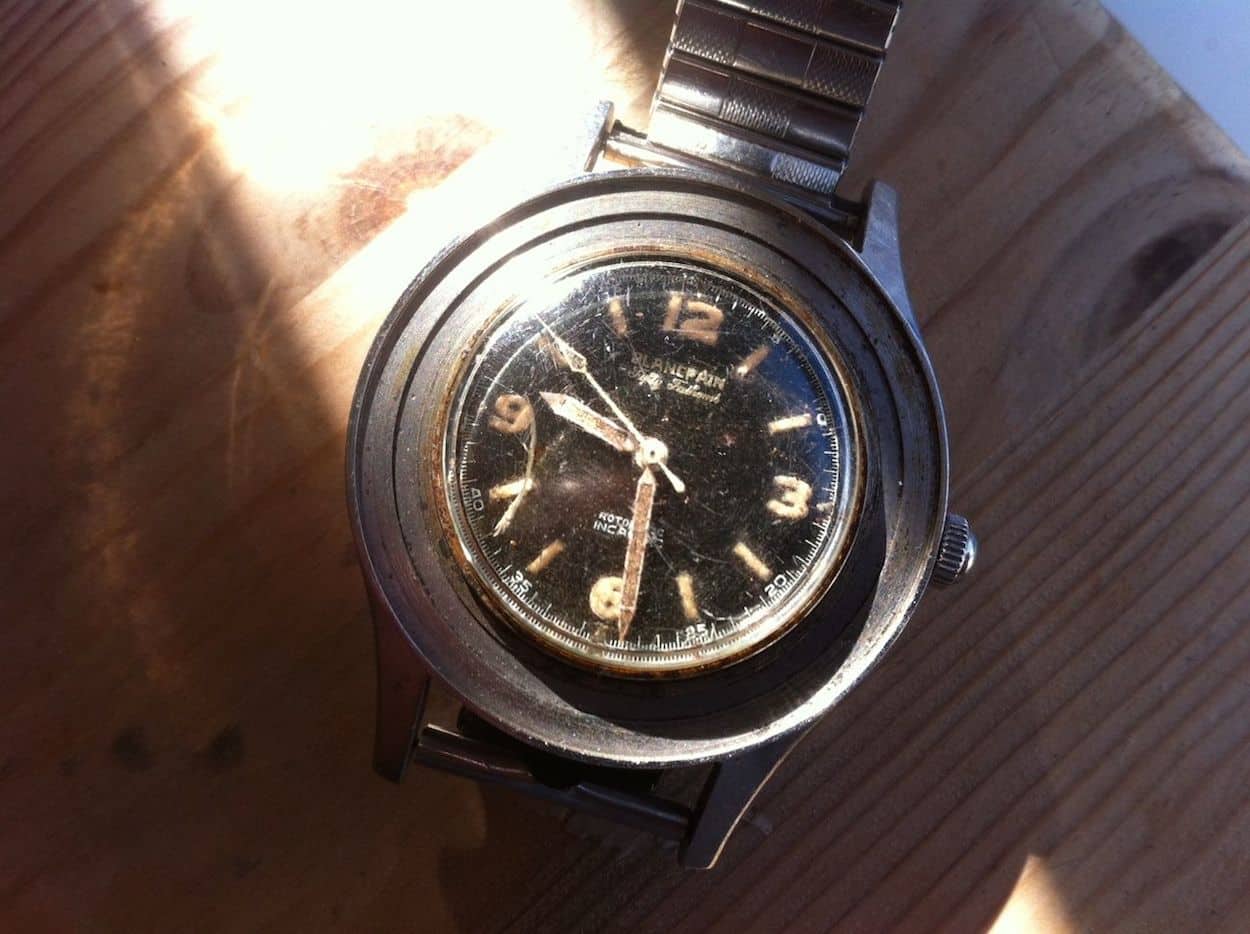 A seller’s photo on ebay.nl of the early Blancpain Fifty Fathoms

Note the small 10,20,30, and so on, on the outer edge of the dial at every other hour marker. This is another sign of an extremely early piece.  Apparently, there were two early dial variations: a rail dial (alignment of the “Rotomatic” and “Incabloc” text and another where “Rotomatic” is smaller. Small “Rotomatic” dials are earlier due to lower serial numbers.

Sure, this is a near-forensic accounting of what often goes into defining a watch and the details can be tedious, but think of it like horological archaeology. In my view, it’s fascinating…especially when it relates to what is arguably the earliest true dive watch (for most, there’s no argument). 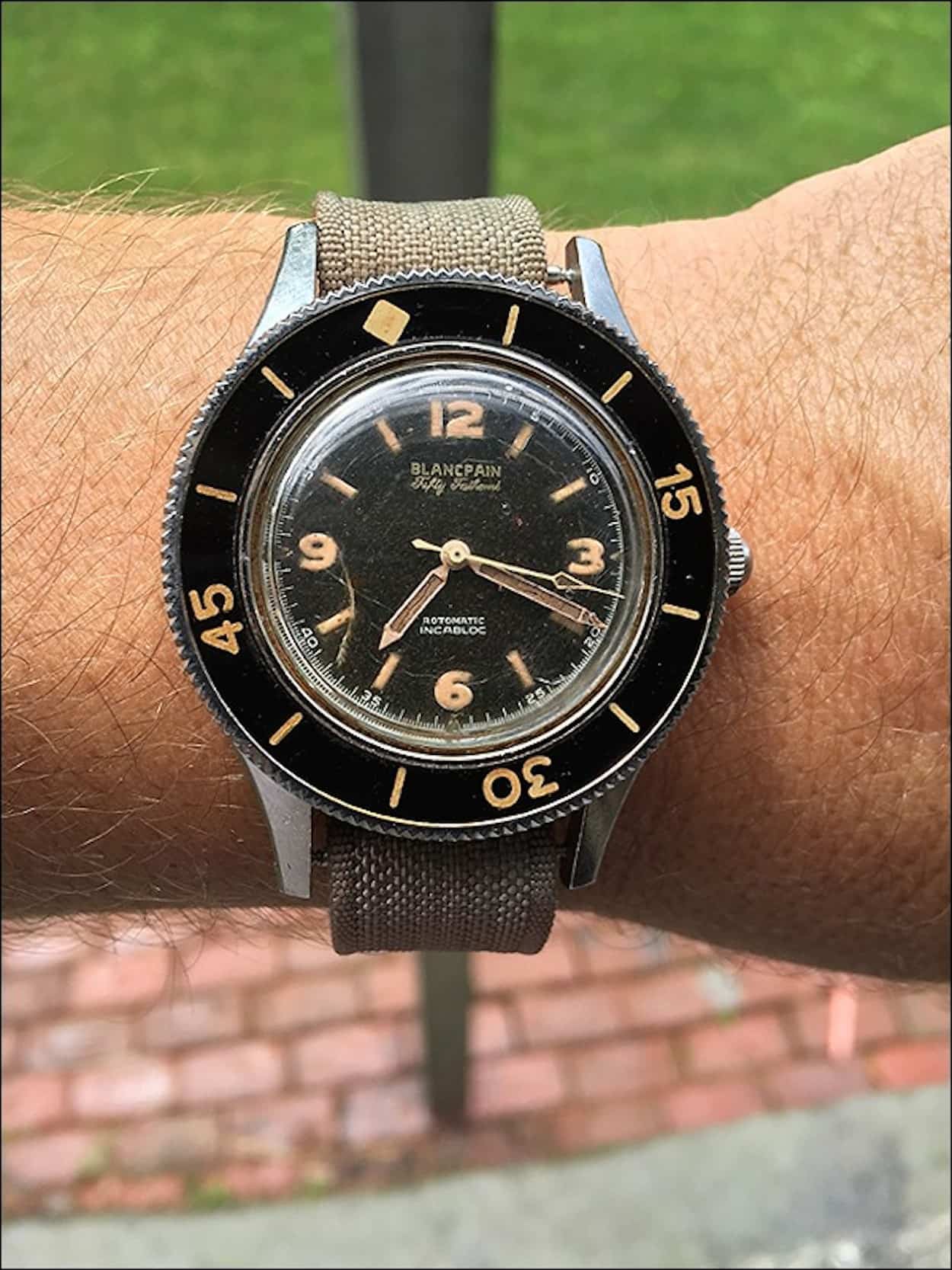 Courtesy of watchprosite.com and user “briandumais”, the owner has fitted an appropriate bezel and polished the crystal of this early Blancpain Fifty Fathoms

You can see that the owner, who is obviously a fan of the Blancpain Fifty Fathoms, was fortunate enough to already have a fitting spare bezel and the result, after polishing the crystal, is amazing. Smartly, the watch will receive a mechanical service but nothing else.

All in, an investment of roughly $5,000 on this early Blancpain Fifty Fathoms has yielded a watch that would likely sell between $20,000 – 30,000 in today’s market if not more. Whether it’s the earliest piece offered by Blancpain for public sale is debatable, but it’s seemingly the earliest known piece by a well-informed group of enthusiasts. It’s a reminder to keep your eyes peeled; who says eBay is only filled with danger?

Images of the bezel-less Blancpain are from eBay.nl and seller “nl_vaner”.

Images of the watch after receipt are from watchprosite.com and user “briandumais”.

Hot Topics
Introducing: The Omega Speedmaster Super Racing With Spirate System
159 comments
Design Vs. Specs — Which Is More Important To You When Buying A Watch?
86 comments
The Time To Buy Is Now: How The Current Economic Climate Influences Watch Buying And How You Should React
51 comments
Introducing: The New Cartier Tank Française
49 comments
A Regret-Free Guide To Buying Your First Luxury Watch — Part Three: Higher-End Options From Omega, Rolex, Grand Seiko, And More
48 comments
Popular
A Question From A Reader: “Which Modern Speedmaster Is Closest To The Original Moonwatch?”
Robert-Jan Broer
14
Hands-On With The Seiko Prospex Dawn Grey Series
Robert-Jan Broer
12
Two Patek Philippe Nautilus Watches: 3700/1A Versus 5711/1A
Robert-Jan Broer
16