When Omega introduced their De Ville Trésor back in 2014, it was only available in white, yellow and Sedna gold. The watch received a lot of appreciation, but it was merely out of reach for many of us. Omega listened and came with a stainless steel version.

Two versions, with a blue dial (that we have here today) and one with a silvery opaline dial. The Omega De Ville Trésor in white gold is a watch that I looked at many times in boutiques, but the price tag of €12.800,- was a bit too steep for me. A pity, as it ticks a lot of boxes for a proper dress watch. A few months ago, during the Time to Move event in Switzerland, Omega showed us the new De Ville Trésor, with models in gold and stainless steel. We got our hands on two of them, so let’s have a closer look. 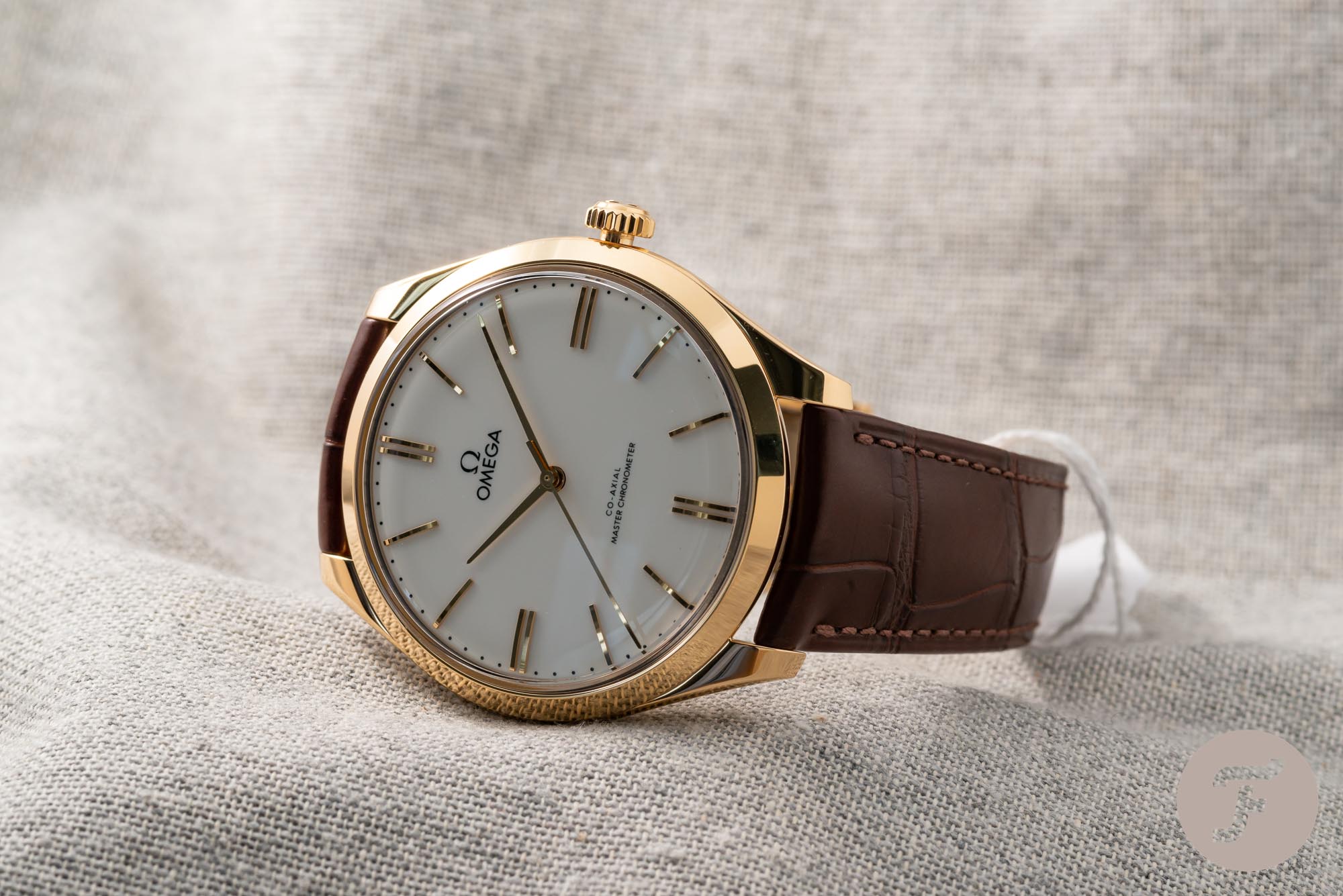 The De Ville collection was only introduced in 1967 after this name had been used successfully for certain Seamaster “De Ville” watches since 1960. It was the last added collection to the Omega family (Seamaster, Constellation and Speedmaster). Today, the De Ville collection is doing very well, particularly in Asia with the De Ville Prestige watches. I believe that the introduction of the De Ville Co-Axial in 1999 (indeed, the first watch in series to have the Co-Axial escapement that George Daniels invented) immediately put it in the spotlight again in other parts of the world. Today, you’ll find several sub-collections in the De Ville family: Ladymatic, Hourvision, Prestige, but also Trésor. As I wrote in the short introduction of this article, in 2014 Omega showed us the De Ville Trésor with an in-house manufactured hand-wound movement. But, in precious metals only. 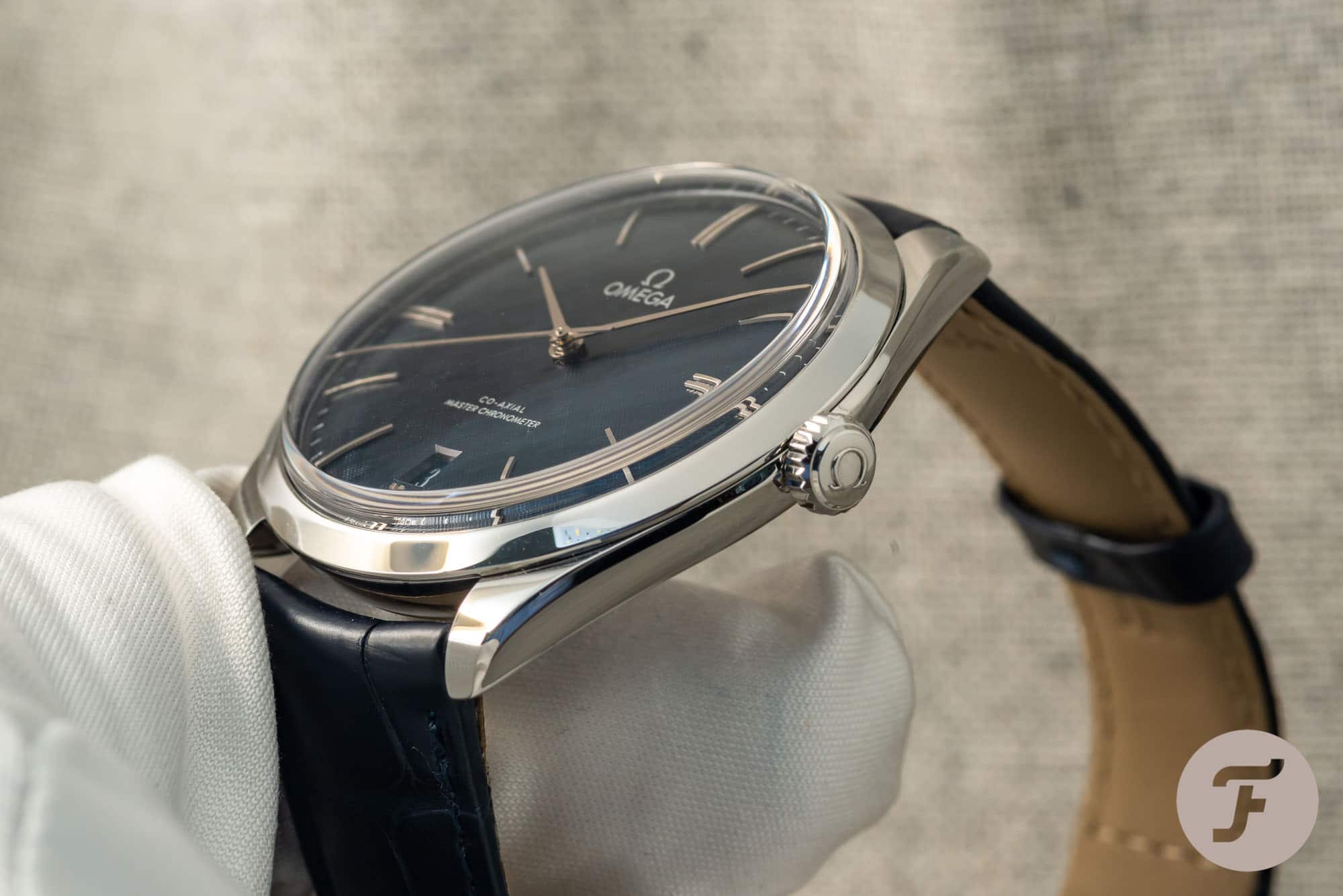 Although you are entitled to think that a dress watch should always be in precious metal, I disagree. There’s nothing wrong with a beautiful, elegant watch in steel, that has all the right ingredients for a dress watch. A subtle case shape, as thin as possible, leather strap and keeping the functions to a bare minimum. Perhaps a spoiler alert, but the newly released gold versions have no date window, which I prefer. The models released five years ago, in precious metals, had a date window as well. So somehow Omega decided to strip down the functions of the gold versions a bit more than the stainless steel model. I am pretty sure that there are enough people out there, who prefer to have a date function though, I am just not one of them.

On the stainless steel version with the blue dial, you will find this beautiful pattern. It reminds me of those rich dials from the 1960s (and 1970s), with all sorts of motifs, patterns and decorations. It is the reason I prefer this version over the silvery opaline dial of the other De Ville Trésor in stainless steel. It looks magnificent and combined with the applied stick markers and sleek hands; it adds all up to a beautiful dress watch. Hour markers, as well as the hands, are made of 18-carat white gold. At 6 o’clock, you will find the date aperture. Although it is nicely done, not too prominent, I could have done without one. 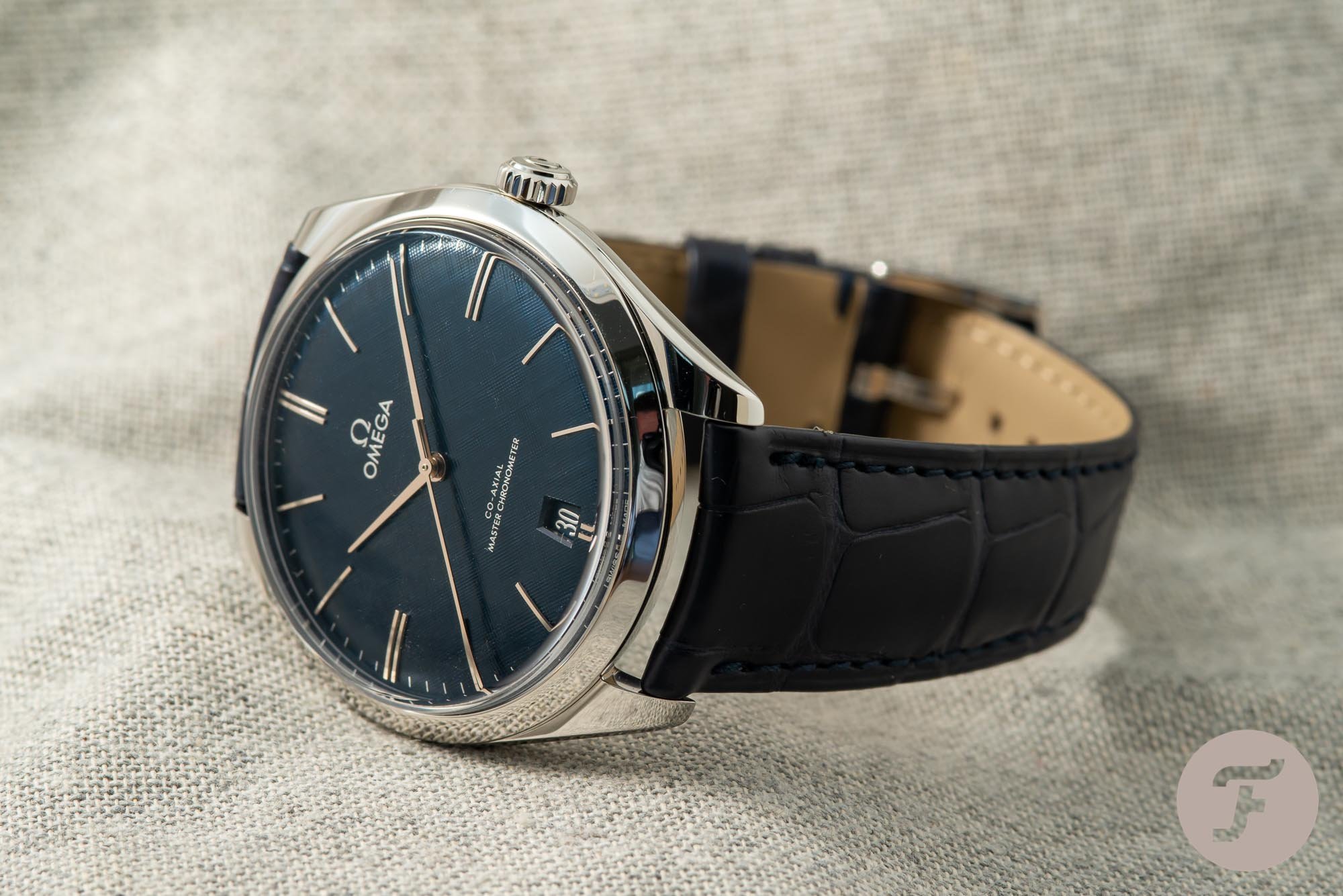 Where my beloved Omega Constellation Globemaster (you can find my thoughts on that watch in this article) has a relatively thick case, the De Ville Trésor has a more elegant case. Especially its profile is sleeker. Not only the shape of the case in general but also the hand-wound movement plays an essential role in the dimensions of the case. The case measures a bit over 10mm in thickness. 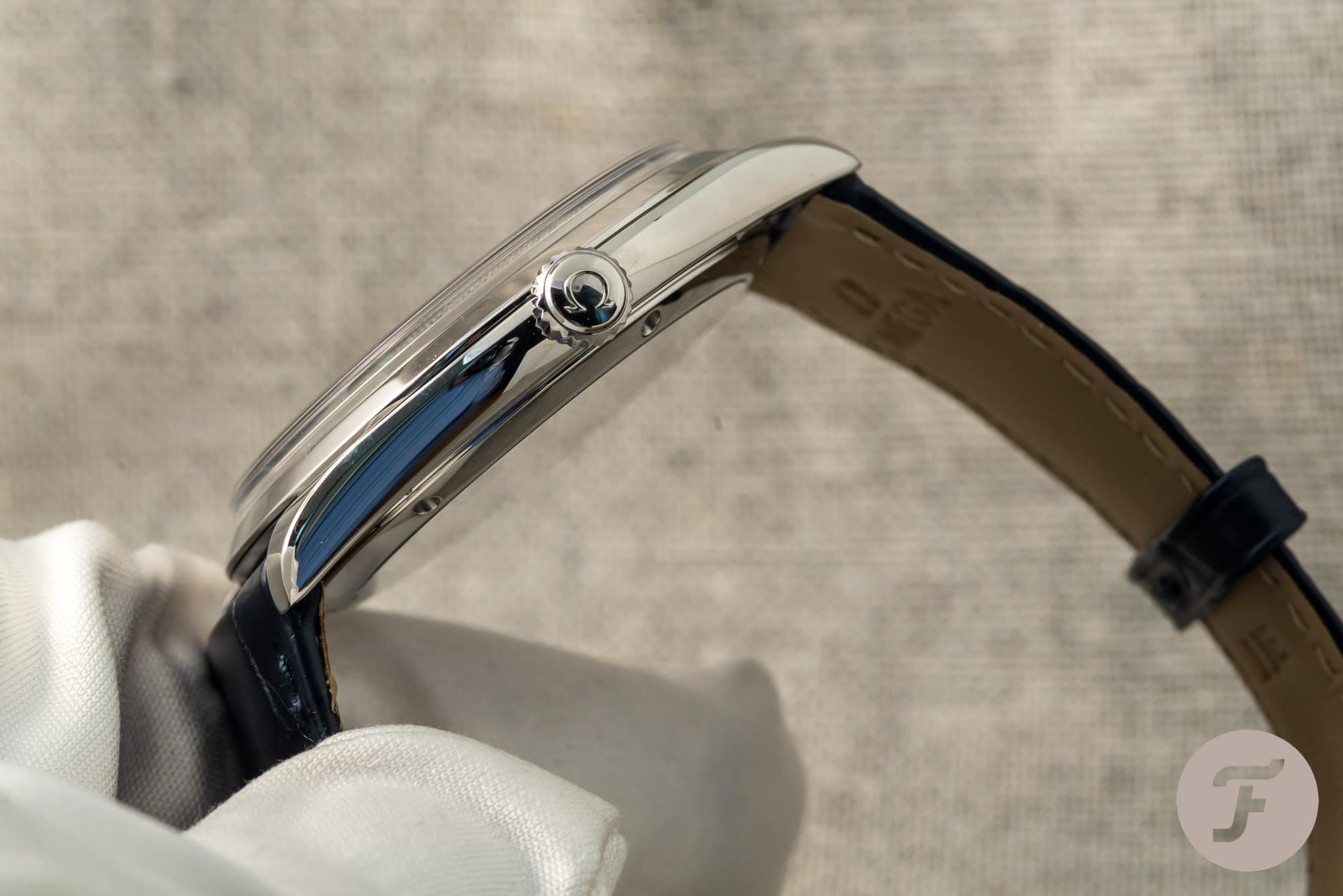 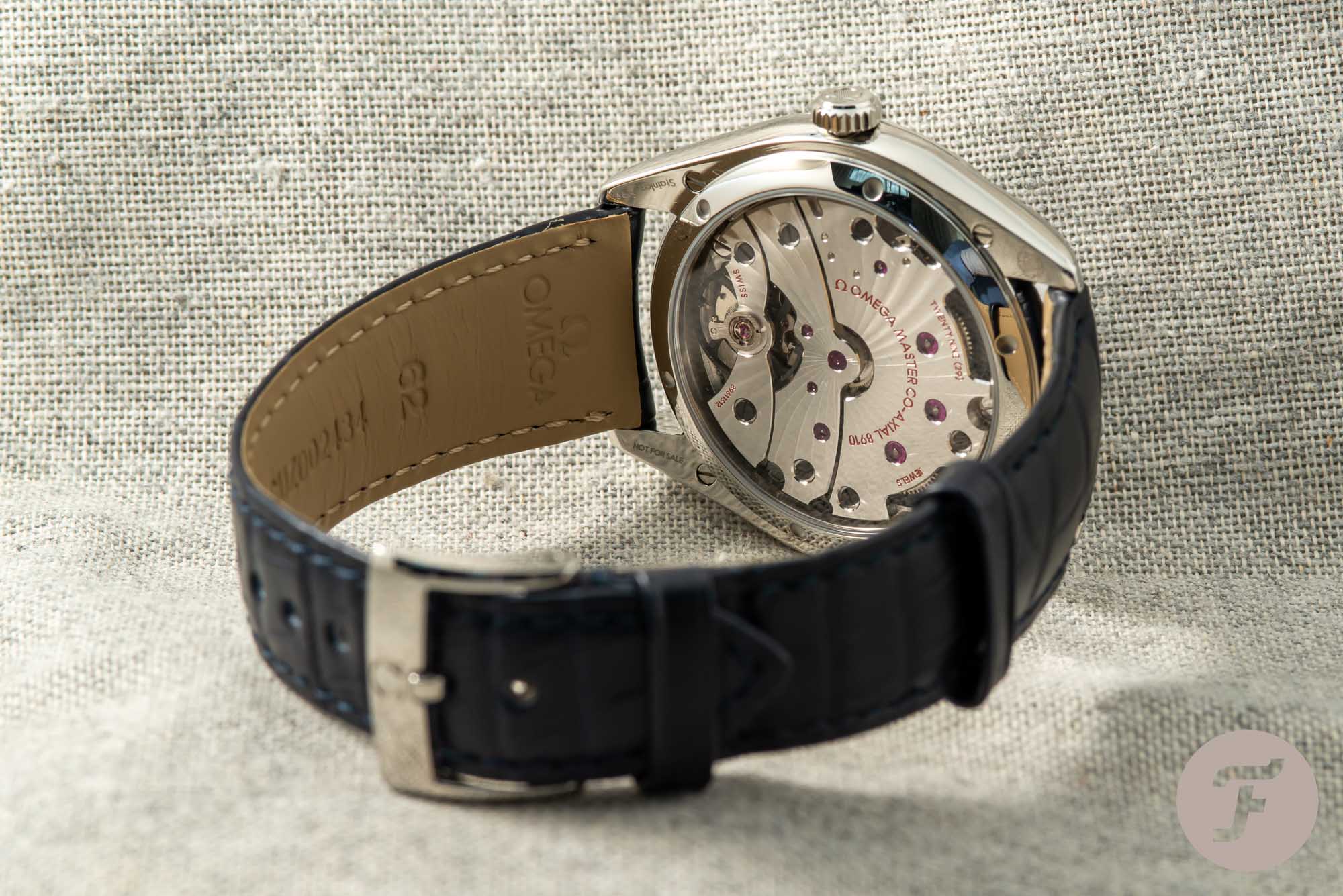 The gold watch with caliber 8929 has a gold bridge, but otherwise, these movements are pretty much identical. Both have 72 hours of power reserve, which comes in useful for a hand-wound movement. In 2014, the movements inside the De Ville Trésor were not ‘Master Chronometer’ as METAS only started their certification for Omega watches in 2015. These two new watches are Master Chronometer certified and meet all the requirements for that.

De Ville Trésor on the wrist

I don’t have many dress watches that I wear regularly. That is mainly because of the size, as I do have my share of 34mm and 36mm vintage dress watches. My 39mm Globemaster in gold is perfect for me, but I guess that its thickness perhaps is declassifying it as a classic dress watch. When I put the Omega De Ville Trésor on my wrist, it is a different look & feel from the Globemaster. It looks more ‘vintage’ because of the thinner case and due to the case shape. Although I very much prefer gold for a dress watch, this blue patterned dial is simply a killer. If you’re in the running for a dress watch from one of the big brands out there, the steel version but also the gold model (depending on your budget I guess) are models you give a try.

All variations come on alligator leather straps, with pin buckles. The gold watches come with a gold buckle in matching colour, of course. The steel model comes at €6200,-, regardless of which dial colour you choose, and the gold versions come at €14.300,-. If you want to go all out, the red lacquered dial version (Sedna gold) that was introduced earlier this year, has a price tag of €16.900,-. 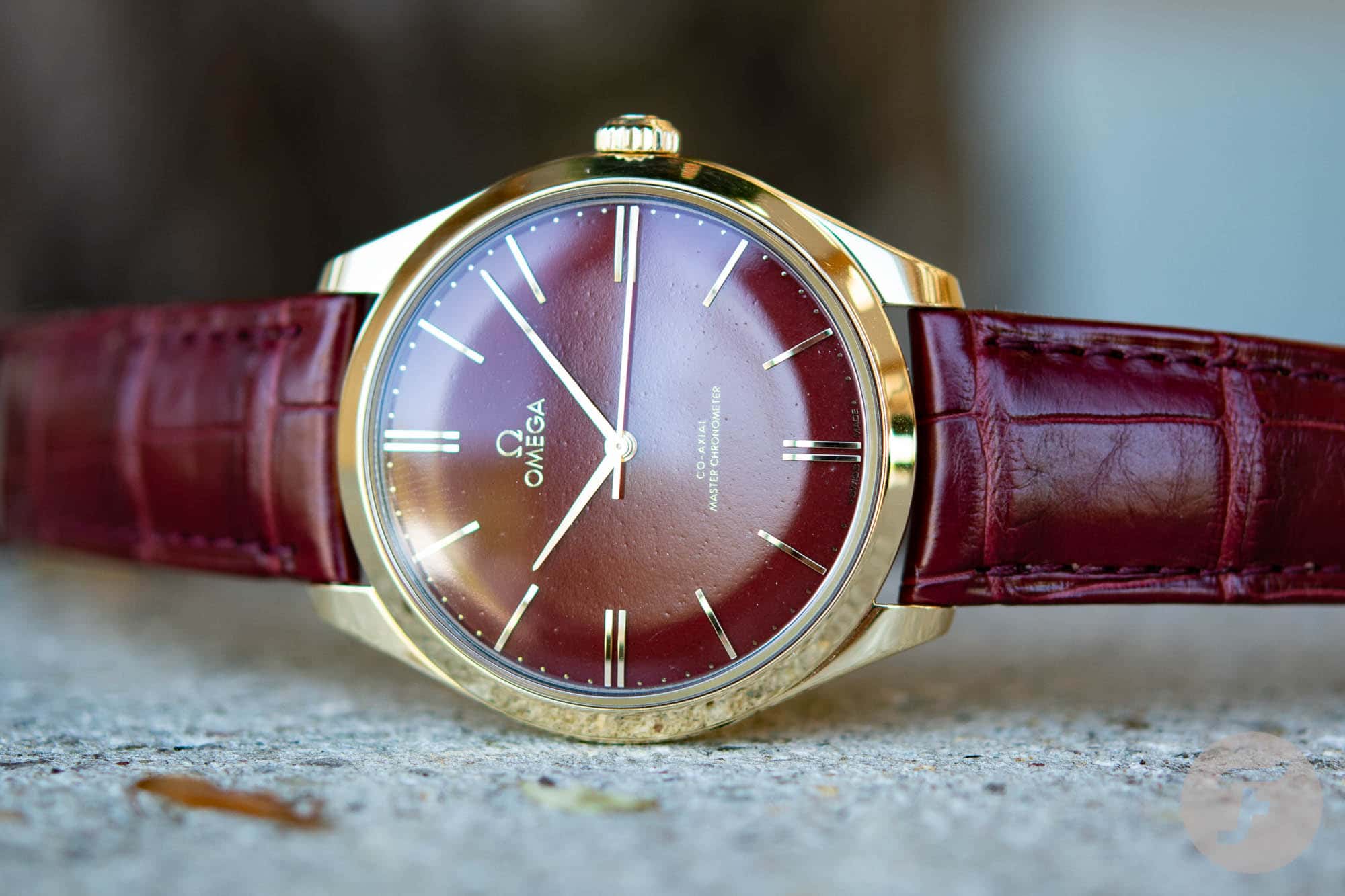 Omega, these days, is perhaps best known for their Seamasters and Speedmasters and a wide variety of ‘editions’ in those two families. The Constellation and De Ville are often overlooked, as their collections are a bit ‘all over the place’. I am pretty sure that a lot of people are aware of the De Ville Prestige and Constellation ‘Manhattan’ models, but have no clue about the Trésor or Globemaster collections, for example. These are sub-collections of a collection. Since the introduction of the De Ville Trésor in 2014, several people told me that they loved that model a lot, but couldn’t afford to go for the white gold version. Now, there’s a steel model with a stunning dial, so I guess the watch is likely more accessible now.

Where I see the Globemaster (forget the models on a metal bracelet, always go for a strap with these watches) more like a watch suitable for everyday use, or perhaps even as an ‘only one’ watch for some people, the De Ville Trésor is less versatile. It is a dress watch and a beautiful one! I guess that besides your sports watch(es), there’s always room for a watch like this.