On The Road To The Tour De France With Tissot

Switzerland, again. The mood on the train changes dramatically as we depart Basel Badischer Bahnhof in Germany and sidle over the border. Masks are removed and suddenly the carriage erupts with a chatter that had been previously stunted by the face coverings still mandatory in Deutschland. Soon, the wide, sun-scorched landscape of Baden-Württemberg gives way to the lusher, greener fields of Neuchâtel. The fields soon fold into one another, becoming hills that eventually pluck up the courage to form mountains. As we zip through endless valleys and around countless bends in the line, glimpses of a tree-lined lake start to come into view. Suddenly, the Alps rise up in the distance, their snow-covered peaks looking more like a painted film set than a view of which human eyes could claim to be deserving. I lean my head against the window and smile…

Traveling by train isn’t for everyone. For some, the thought of boarding a train in Dresden at 10:19 in the morning, knowing that a nine-and-a-half-hour journey stands between them and their destination would be hell. There was maybe a time in my life I would have agreed with them, but no longer. For the past six years, I have lived in airports and called fuselages my home away from home. The pandemic provided me with a break from that lifestyle for the best part of a year, but as someone whose job requires relentless moving from place to place, my respite felt oddly brief in comparison to the strict measures enforced on my less fortunate peers. 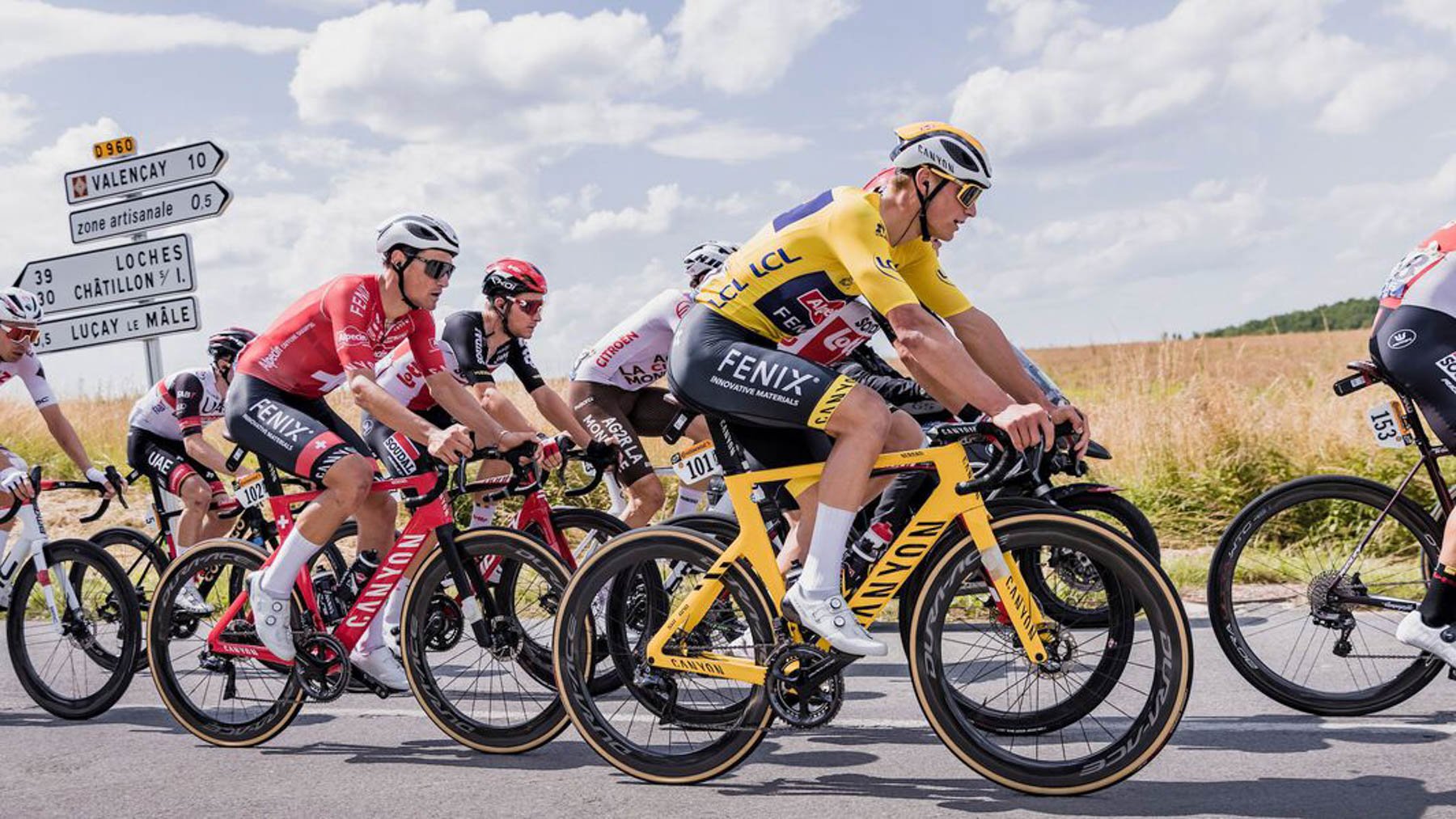 A man on the road

Now, however, several months back into the swing of things, it is like that weird window of sedentarism never existed. My mind is once more addled by all that it is asked to process. My anchor has been cut loose and I am, again, living the life of a man on the road. It is as tiring as one might expect, but every so often, the glamor and the unbelievable opportunities it presents make the physical and mental discomforts of never feeling “home” worthwhile.

When Tissot asked if I’d like to attend the Tour de France, I nearly broke my keyboard in response. My fingers hit the keys so hard that I think I might have dislocated a digit or two. I have been a road cycling buff since I was a child, and the Tour de France is, in my humble opinion, the greatest sporting event on Planet Earth. 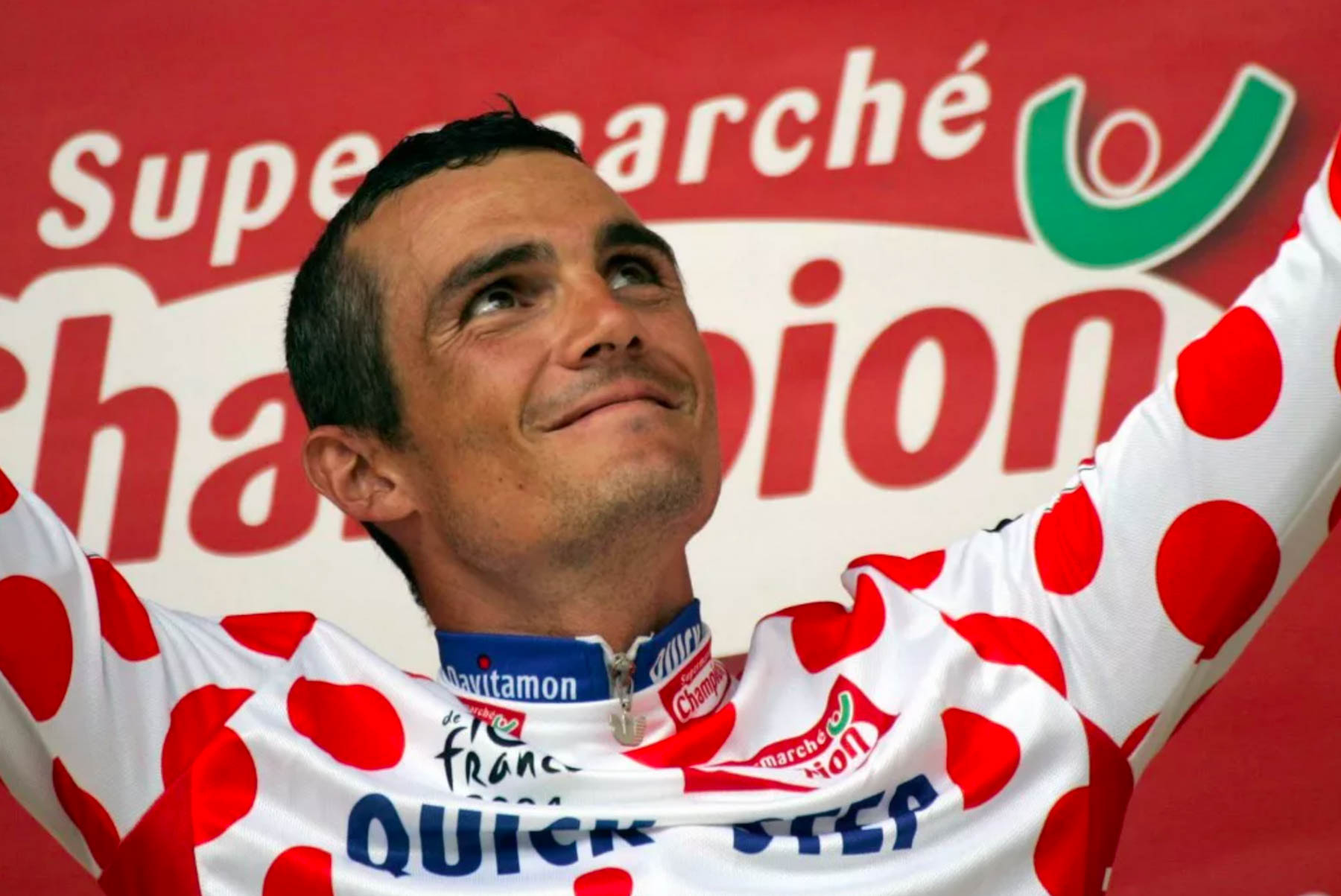 I’m sure that I inherited my love of “Le Tour” from my father, but I have no idea where his adoration of this grueling contest came from. He never cared about the Vuelta (the Tour of Spain) or the Giro (the Tour of Italy), but the Tour, perhaps because of its familiar arena always held a special place in his heart. We frequently holidayed in France, knocking off each corner of the country via stays in various Eurocamp sites but preferring the Alps and, particularly, one charming campsite at the foot of Alp d’Huez. 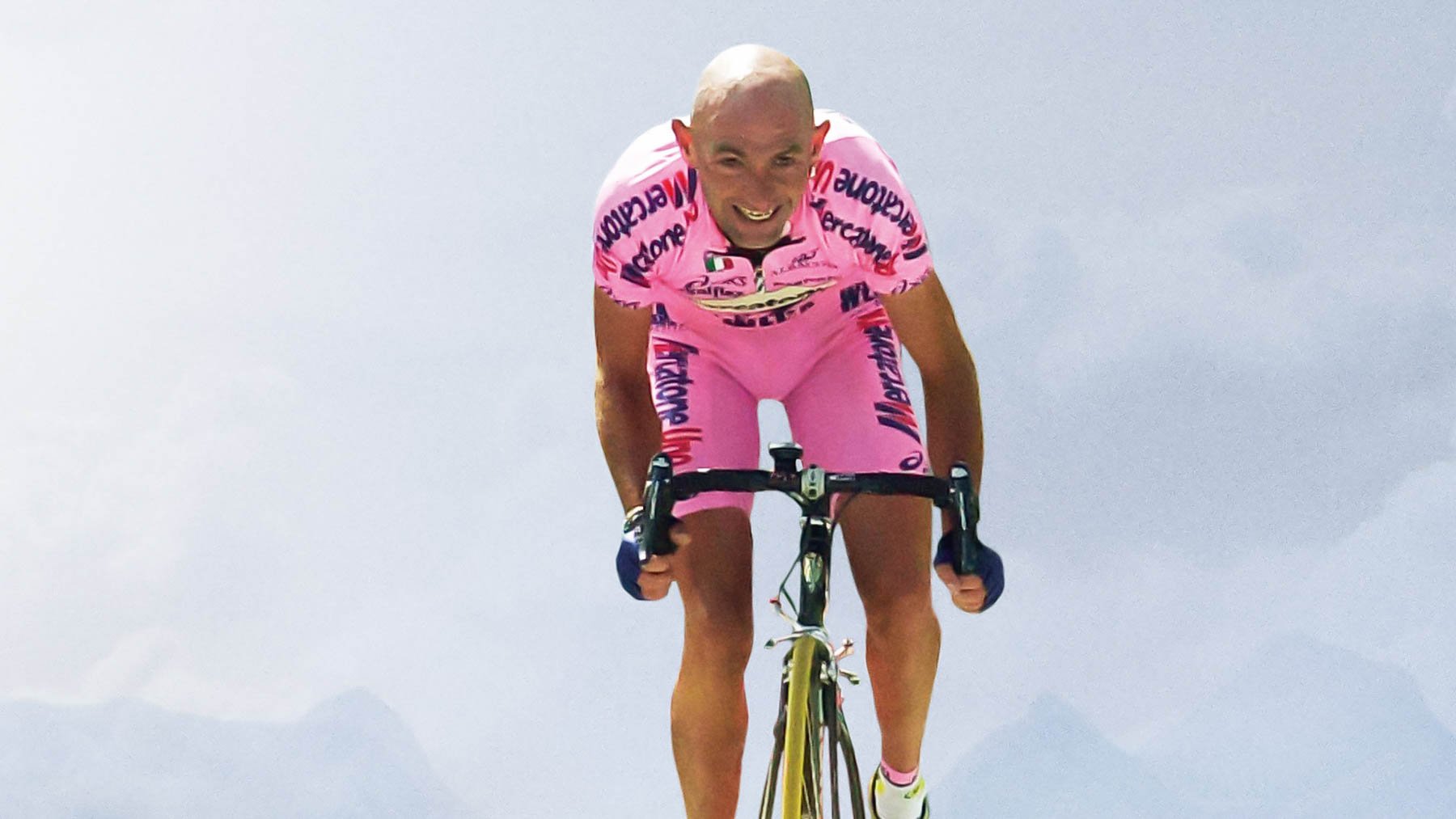 Maybe Channel 4’s daily coverage of the race was what facilitated my interest. The voices of Phil Liggett and Gary Imlach were like those of old friends, and the exploits of the ’90s heroes (many of whom would later become embroiled in doping scandals that rocked the sport) lit up our evenings together, huddled around the television, watching the half-hour highlight show with unblinking attention. 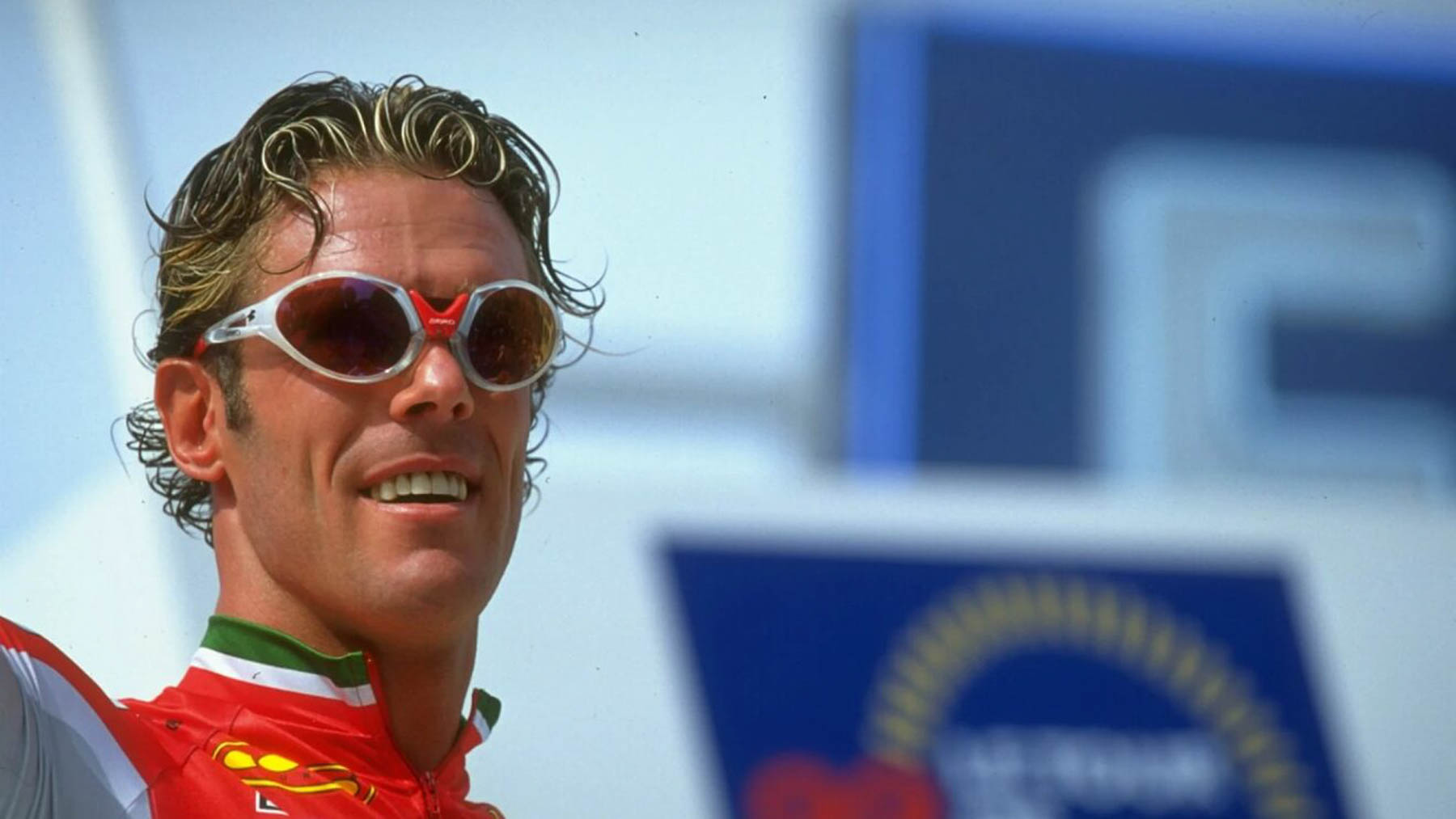 The sex symbol of the peloton, “Cipo” and his glorious locks

My father, my brother, and I had our heroes. I was obsessed with the ever-so-roguish Richard Virenque (whose name is now a byword for frankly preposterous denials of doping). My dad adored the late Marco Pantani, who was as swashbuckling a character on the bike as he was a troubled one off it. Tim, my brother, fancied himself as Manchester’s answer to Mario Cipollini, the Lion King, the tall, bronzed, Italian adonis who could decimate bunch sprints with his perfectly coiffured mane of golden hair streaking behind him as he leaped out from behind his lead-out men to lunge for the line. 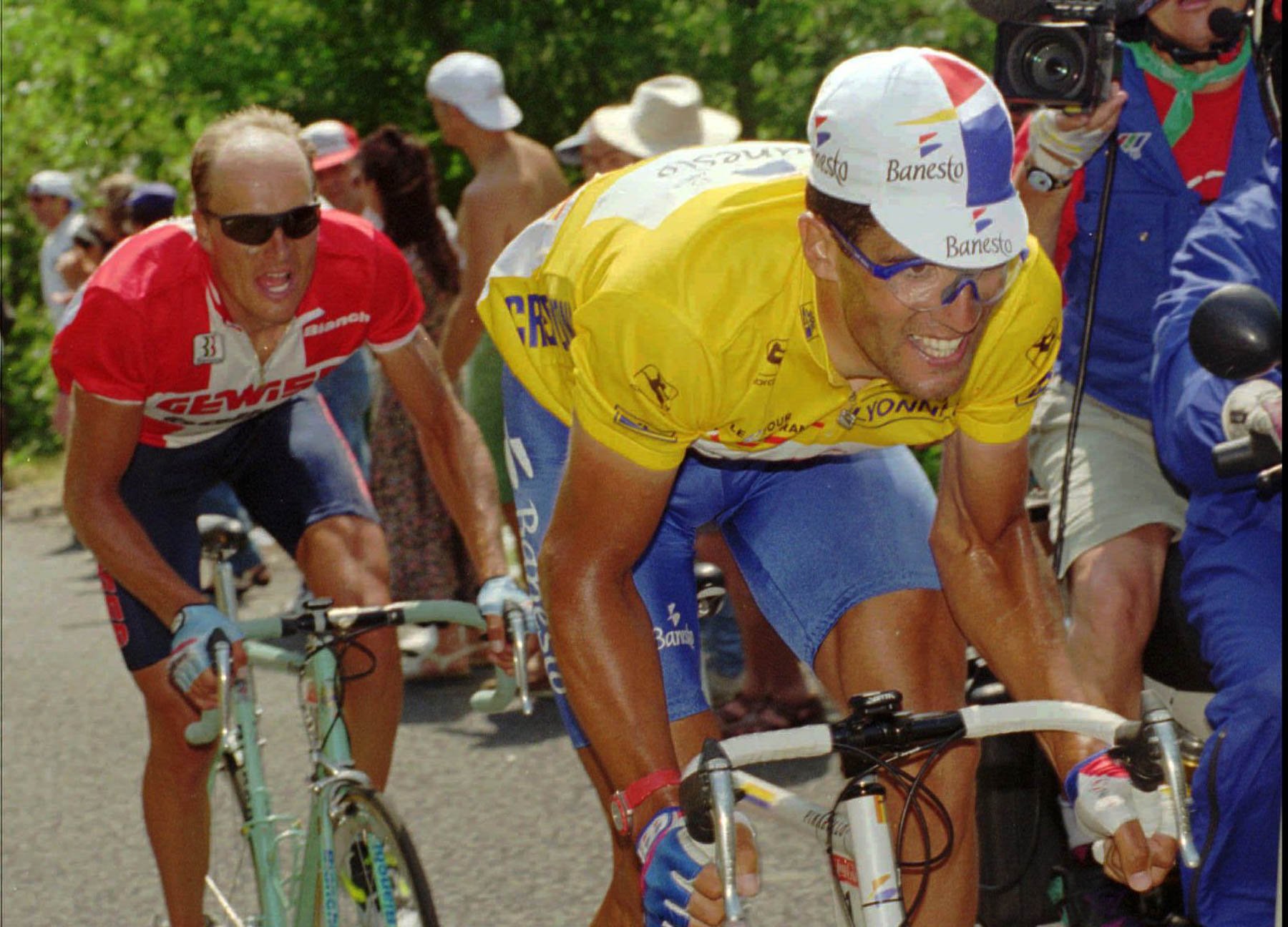 Big Mig leading the man who would one day halt his run at the top, Bjarne Riis of Denmark

In those days, we rode frequently and discussed the history of the event at length. Records mattered to us (they always have), and so living through the Miguel Induráin era was a true privilege. It’s remarkable that the tall, tacit Spaniard has never even so much as been implicated in a scandal, despite being the only man to win five Tours in a row (if we discount disgraced American cyclist Lance Armstrong, who racked up seven as the kingpin of the sport’s most organized doping ring).

The spectacle astounded me.

“Thirty-four beats per minute,” my dad would mouth, almost disbelievingly as he relayed “Big Mig’s” resting heart rate. “Can you imagine that?” As a seasoned marathon runner himself (with a resting heart rate in the 40s), he found it mesmerizing. I fed off his child-like wonder and grew to idolize the level of grit and determination it must have taken to fine-tune one’s body to such a machine-like state. 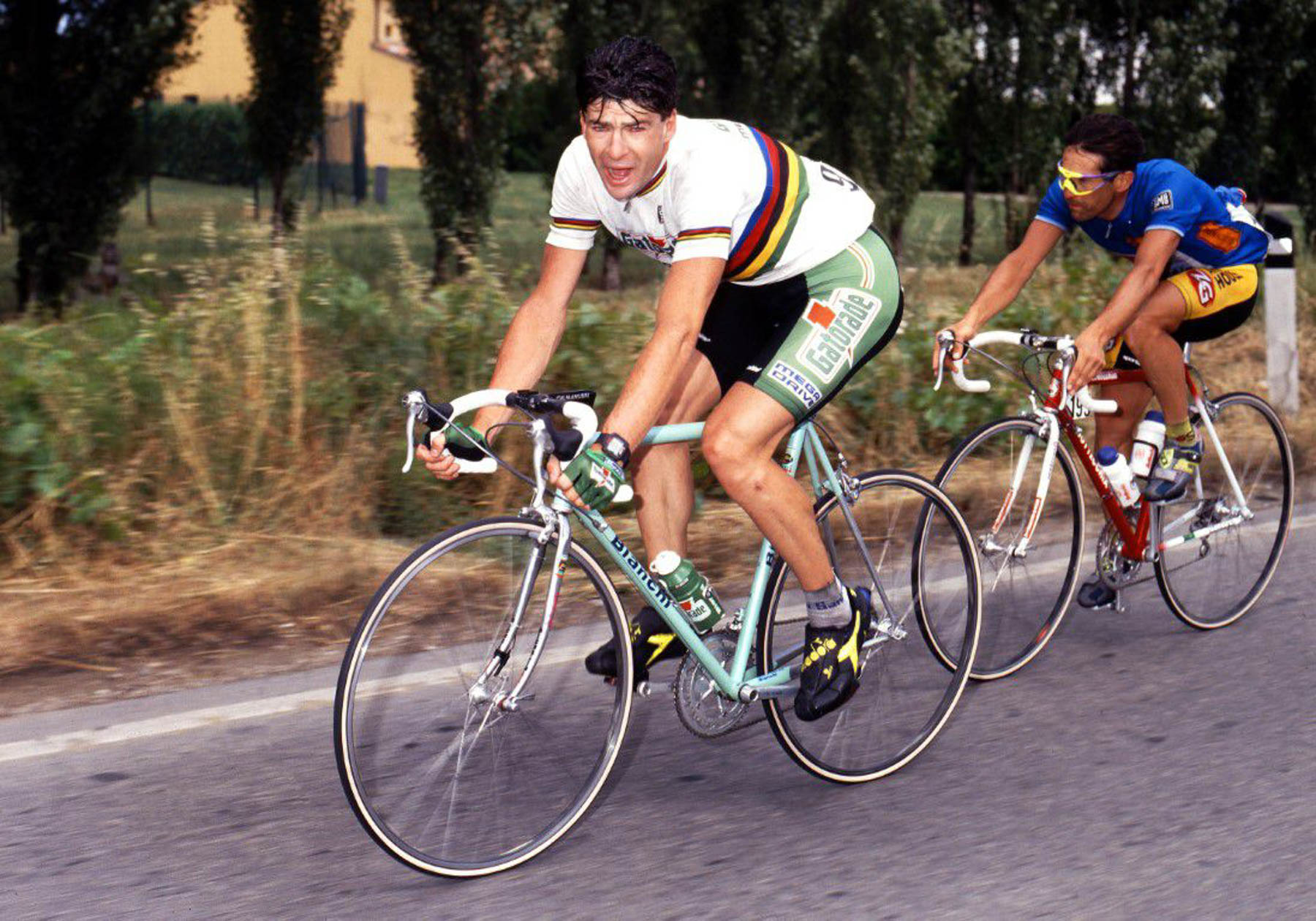 We were lucky enough to visit the Tour in person a couple of times. Once in the very early ’90s, during the brief heyday of Italian sprinter Gianni Bugno, and once again in the early 2000s when local hero David Miller was riding for the Cofidis team. The spectacle astounded me. Sure, the race looked impressive on our small TV screen, but seeing the riders up close — all muscle, sinew, and sweat — was akin to watching Gods gallop past on winged steeds. 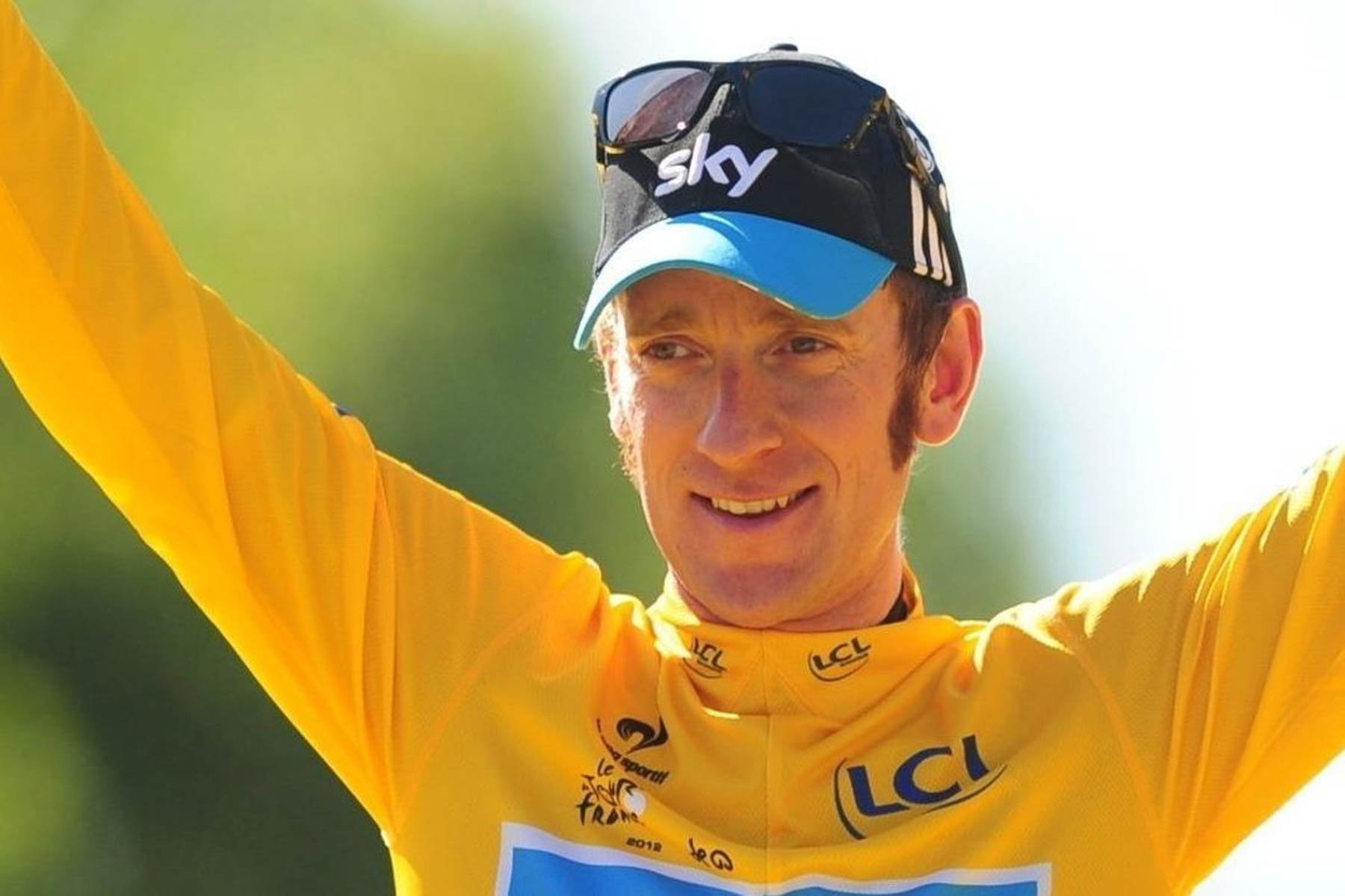 Wiggins on the top step in Paris

You might think that traveling early in the day before the roads close for the race to find a good spot to loiter on the side of the tarmac for several hours as the peloton descends upon your vantage point sounds like a monumental waste of time (especially given that when the riders did finally arrive, they disappeared in a flash), but the camaraderie of supporters and the legendary Tour caravan made it all worthwhile.

…the period of British dominance…

We didn’t have much in the way of supporter material, but we grabbed our tartan picnic blanket and waved it furiously for Scotsman Miller as he thundered past, safely nestled in the group that day. At that point in his career, he was very much on the up, having won the prologue (the first stage) of the 2000 Tour and held the race leader’s yellow jersey for a few days. He would go on to win three more individual stages of the Tour and the Team Time Trial once. In doing so, he cemented himself as one of Britain’s finest-ever stage racers (until, of course, Sir Bradley Wiggins’s General Classification win kicked off the period of British dominance in 2012). 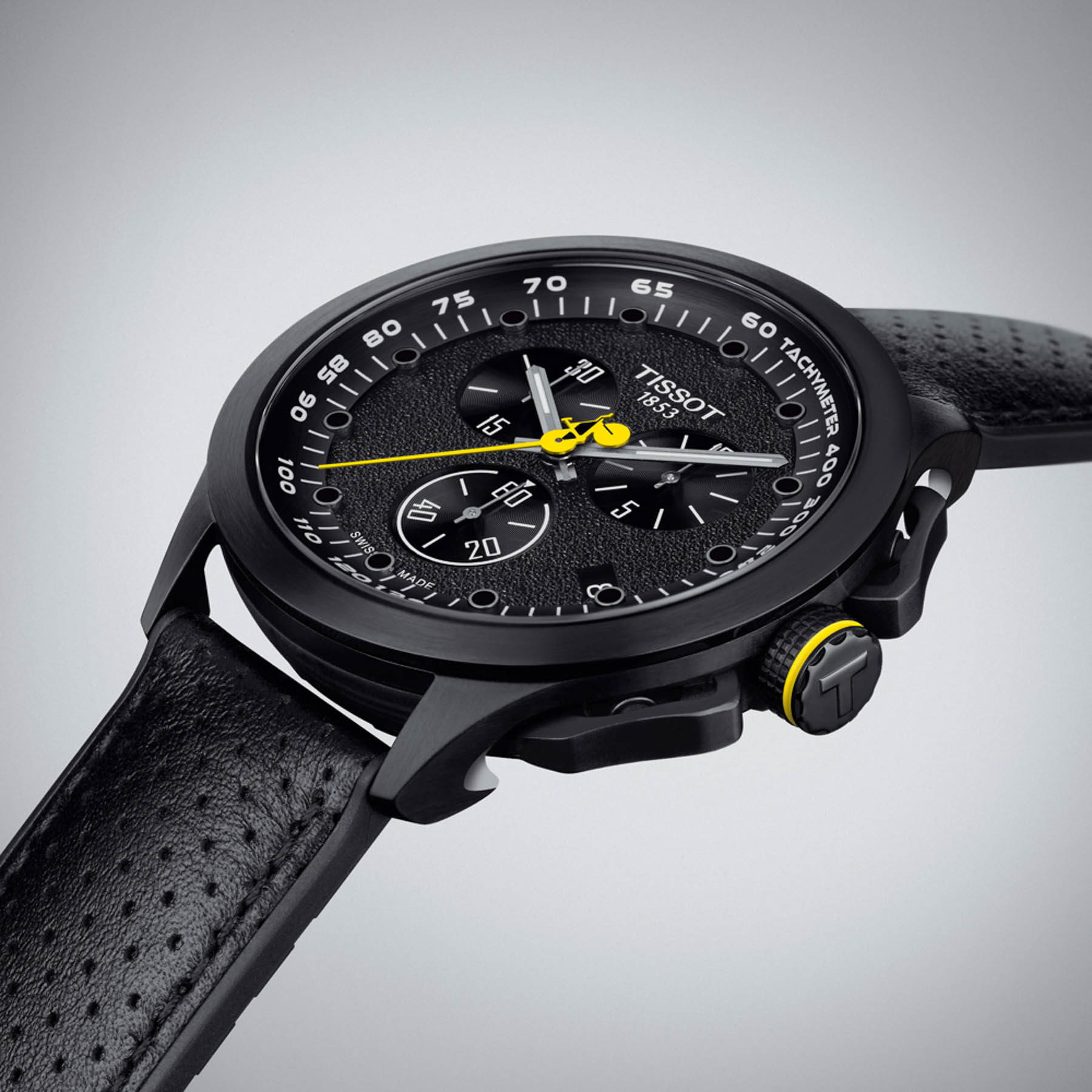 And now, thanks to Tissot, I have the chance to attend the Tour for the third time. Only this time, I will not merely be a spectator. Almost unfathomably, I have been invited to ride a 50km “mini-stage” on Saturday the 9th as the Tour rolls into Lausanne, Switzerland.

…I won’t be catching the attention of any talent scouts…

That’s where I am right now, sitting at the desk of an incredibly plush hotel room, ogling my Tissot-branded jersey and bib shorts that I will wear during the event. An ill-timed footballing injury likely means I won’t be catching the attention of any talent scouts looking to add a Green Jersey hopeful to their ranks (and might in fact mean that I finish the mini-stage on foot/in the back of a car). This, however, cannot dampen my enthusiasm.

Tissot, the official timekeeper of the race has arranged for us to watch the end of Stage 8 (after the arrival of the caravan, of course), and also the start of Stage 9 on Sunday morning. There is an outside chance of being able to speak to some of the riders themselves, a treat for which I am very much keeping my fingers crossed.

Tune in on Monday for the Stage 8 recap. Learn more about Tissot here.

All images courtesy of Associated Press.